Our morning in St. Maarten began around 10AM on Thanksgiving Day, and this was our first shore “excursion” with Celebrity to St. Barths. I put excursion in quotes because literally all we paid for was a ferry to St. Barths and back. We decided to forego a day in Sint Maarten/Saint Martin to travel to super luxe and inaccessible neighbor, Saint Bartholomew’s. We did slightly regret not being able to see the second Caribbean island that shared two cultures – Dutch on one side and French on the other. The other island if you’re wondering, of course, is Hispaniola, which shares not only two cultures but two countries – Dominican Republic and Spanish, and Haiti and French.

We did the breakfast buffet this morning instead of room service since we had a little extra time and had purposely gone to bed early the night before. In fact, although our dinner times varied largely, anywhere from 6PM – 9PM, we always went to bed by 11PM because we were just tired! The breakfast buffet may quite possibility be my least favorite buffet time. Things aren’t where they should be. You also have to go out of your way to get basic stuff like toast and English muffins (you must ask an attendant to toast them and white while it’s happening, and there’s always a line. Finally, they don’t have spoons or bowls where you’d think they should be, and the baked goods (blueberry muffins and bran muffins) look amazing but taste stale and dry. Similarly, the pancakes and French toast always have weird incongruous stuff in them, like raisins. Never once did I see blueberries or chocolate chips – was this just an artifact of Celebrity wanting to keep their elderly guests regular? Finally, seating is very hard to find and we have never come at a time that wasn’t crowded…plus it ends too early – 10AM!

After breakfast, we proceeded to the Silhouette Theater to catch our shore excursion.

Here’s a picture of our ferry – in retrospect we could have probably just booked with the company directly for transport, but our previous research didn’t turn up any timings that would work with the ship’s port schedule. 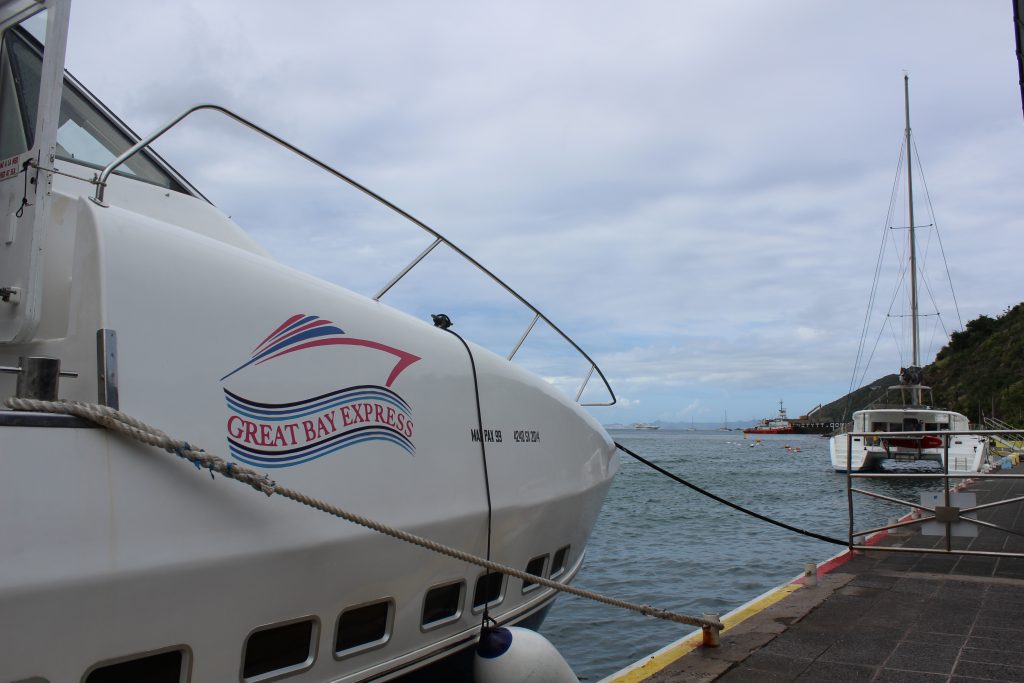 I immediately discovered, to my dismay, that the ferry was completely enclosed – not a great prospect for those who are prone to seasickness. For the entire 45 minutes ride to St. Barths, we encountered severely choppy waves, sending the boat pitching and rolling from side to side. I was doing OK thanks to my several forms of anti-nausea medication, but several people on the ferry couldn’t make it. I spent the ride closing my eyes and pretending not to listen to barfing sounds, lest I get sick myself. That was not fun. On the flip side, the crew was great, and they told us it would be much, much smoother on the ride back since we would be traveling West with the current.

While St. Maarten looks like it could have been cool (all we ultimately were able to judge was the port area and harbor), St. Barths was a blast, and we got to enjoy the capital, Gustavia. 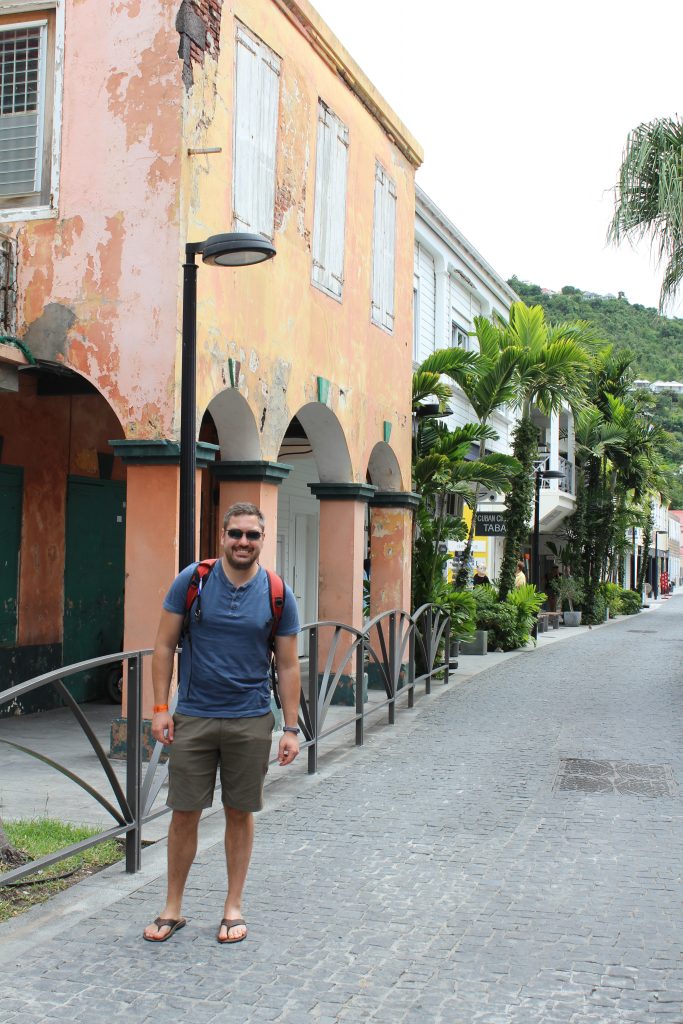 We immediately walked the promenade to arrive 20 minutes later at Shell Beach, which was our first stop. Despite the high prices and celebrities on this island, the beaches were free. It was a lovely beach, and we enjoyed it for a few hours.

We saw fancy yachts come and go, and also enjoyed the aquamarine, clear water free of trash (in fact, all the islands we visited really took care of their shore line and cities, with very little garbage surprisingly to be found). 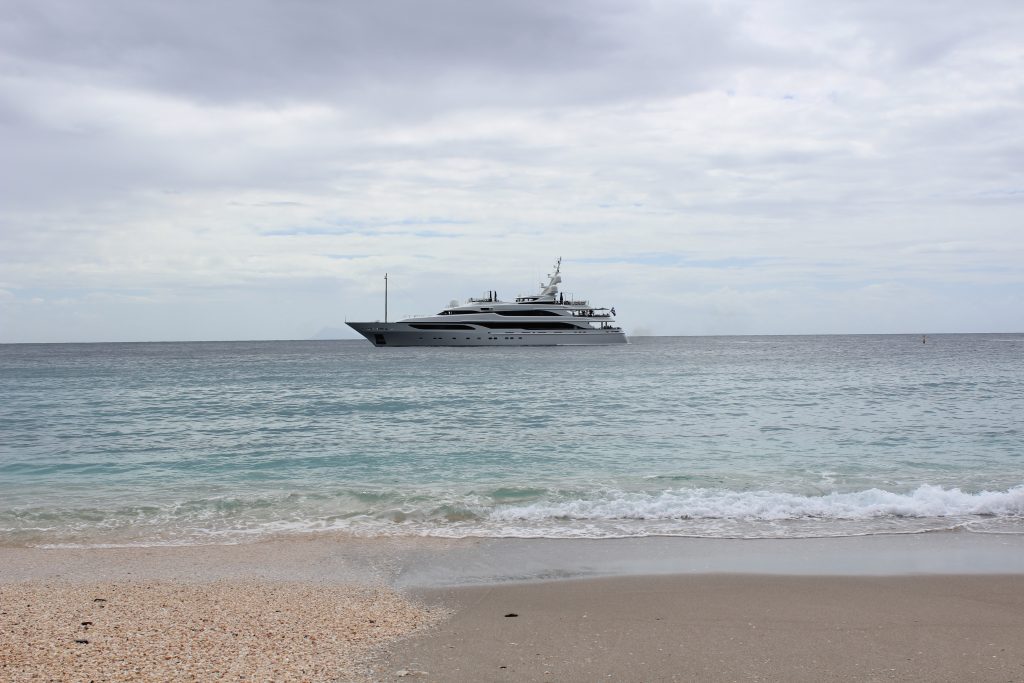 We also noticed the deaf couple from the cruise ship enjoyed it with their translator as well. We read, napped, and swam until we had our fill.

We also had plenty of time try out our new wireless device, called a TEP. We had rented it for 5 days and it allows all you can eat, up to 5 device access to the local cellular network for $7.99 a day. Much cheaper than our AT&T international $10/day passes per person. We ended up really, really enjoying the TEP, and would rent it again, even when in a foreign country and not cruising. It was free to get it shipped to us prior to the cruise, and was a nominal fee to return after.

Afterward, we went back to town and grabbed a bite to eat at Bar de L’Ouble, which was a great little French brasserie in a prime location on the strip.

I ordered a goat cheese, veggie panini and sweet potato fries, and Brendan got a beefsteak panini plus an amazing passionfruit panini (really, amazing). 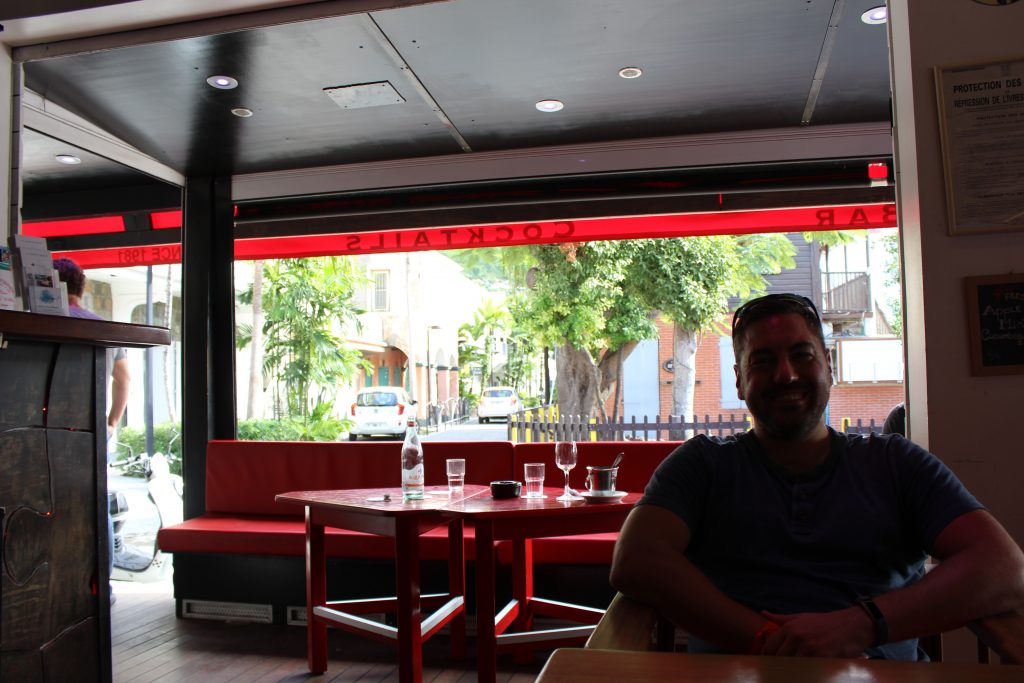 We enjoyed our charming French waitress, and think we also spotted a celebrity or a model (see below) – she was just too perfect to be a regular person. The people-watching here was top-notch. 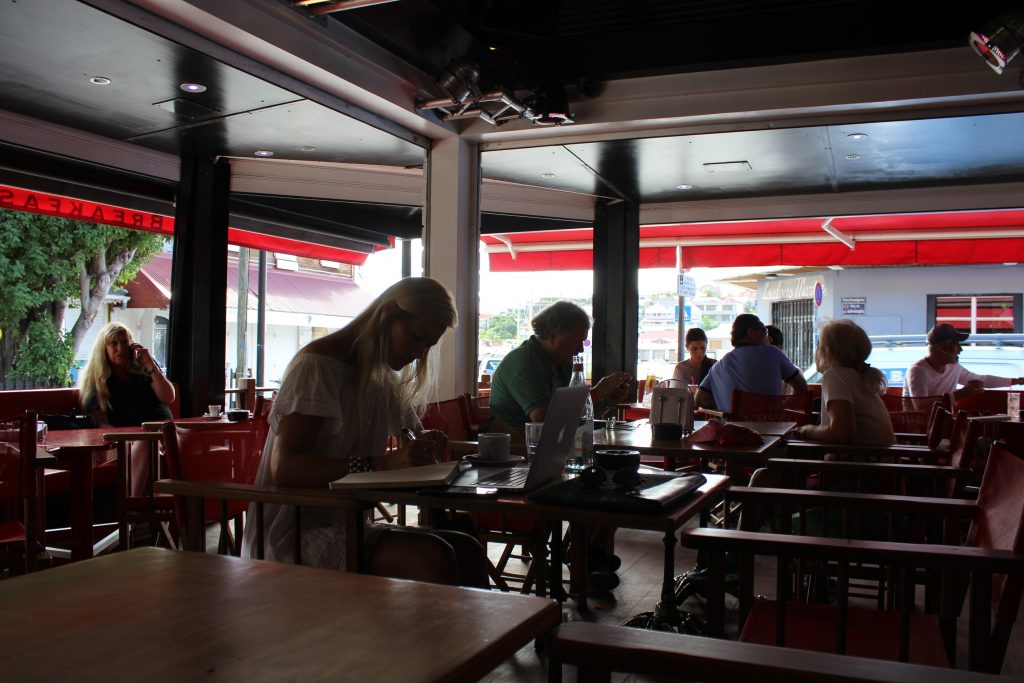 After lunch, we checked out a few of the shops that we have previously passed when they were closed for lunch (lunch was 1PM-230PM more or less, and shops closed down during that period). We found a shop called Äilana, and we bought a Christmas ornament to memorialize the day as well as a St. Barths t-shirt for Brendan.

We walked along the harbor for a time, curious about the yachts, the people, and the lives they lead. 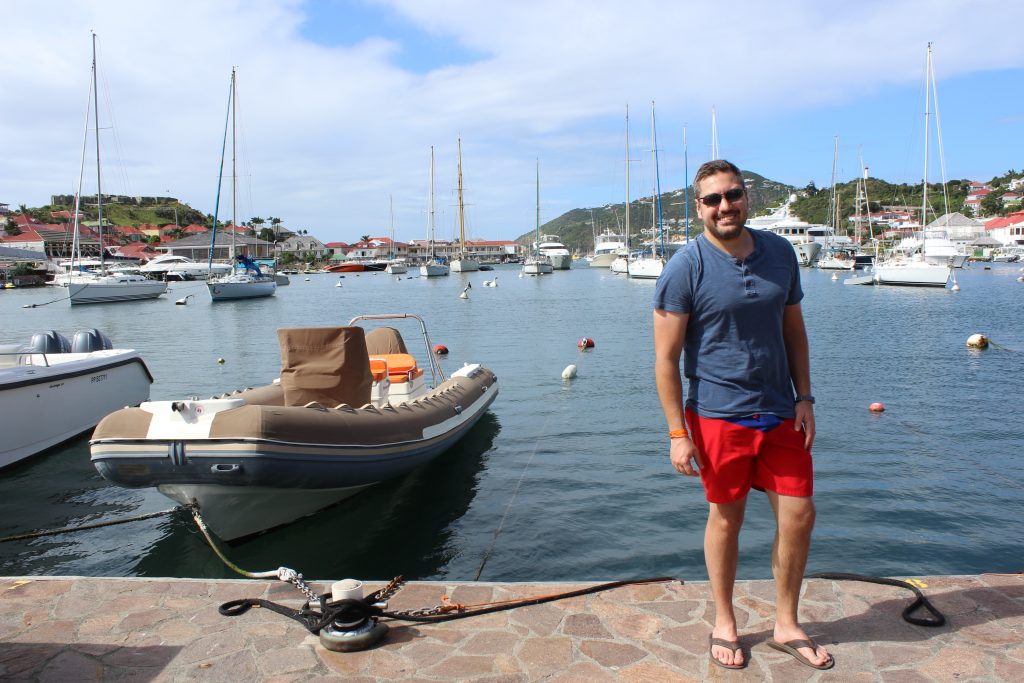 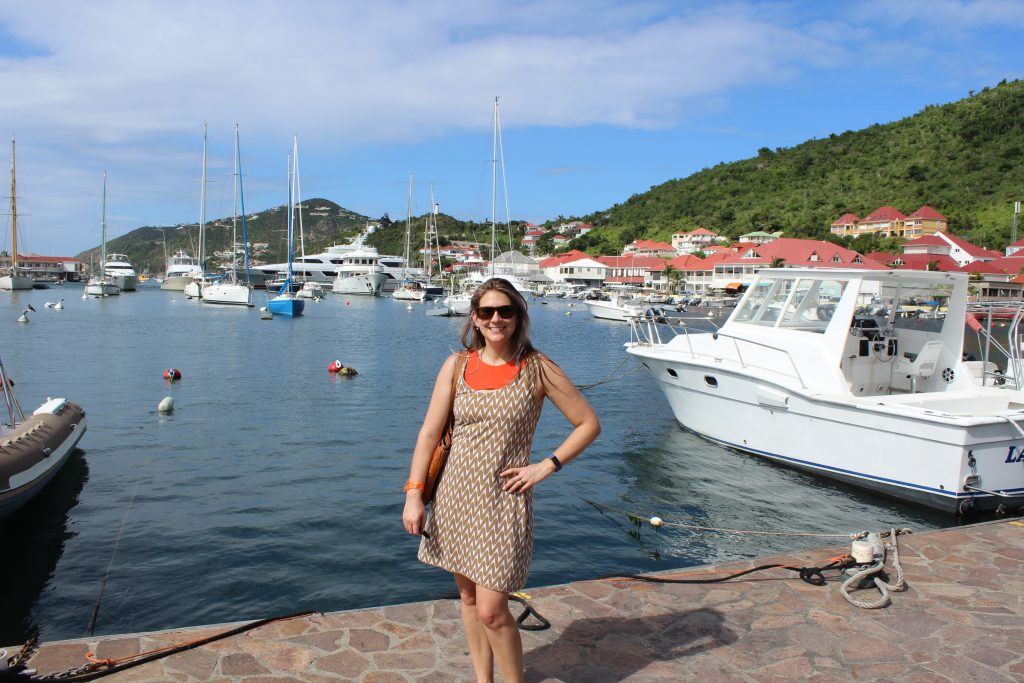 Thoroughly enjoying the relaxed day, we waited for our ferry which was right on time. 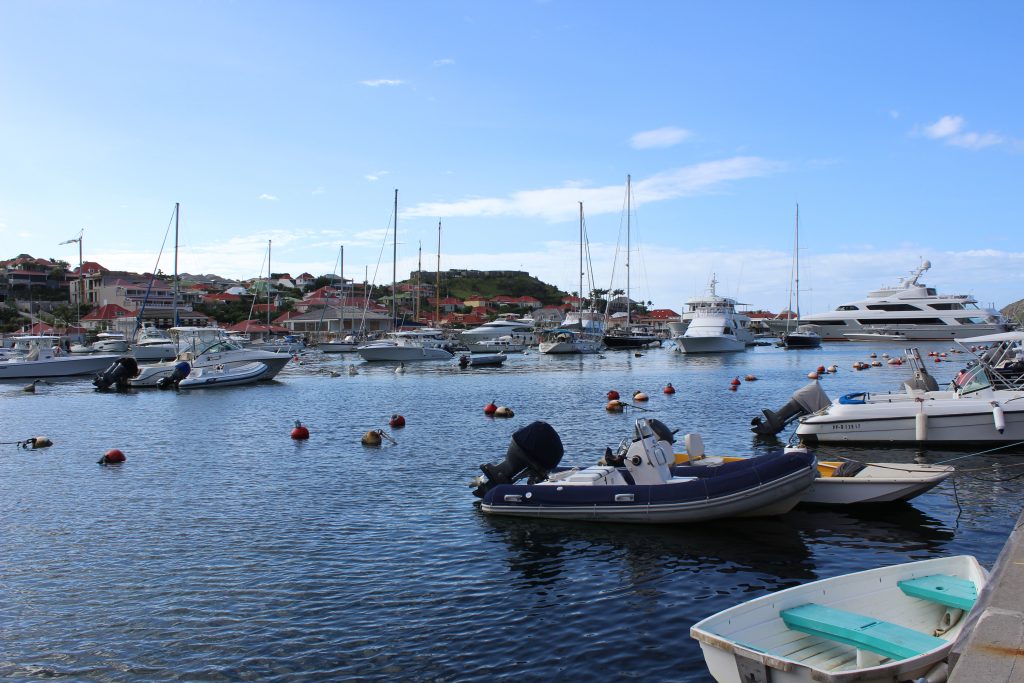 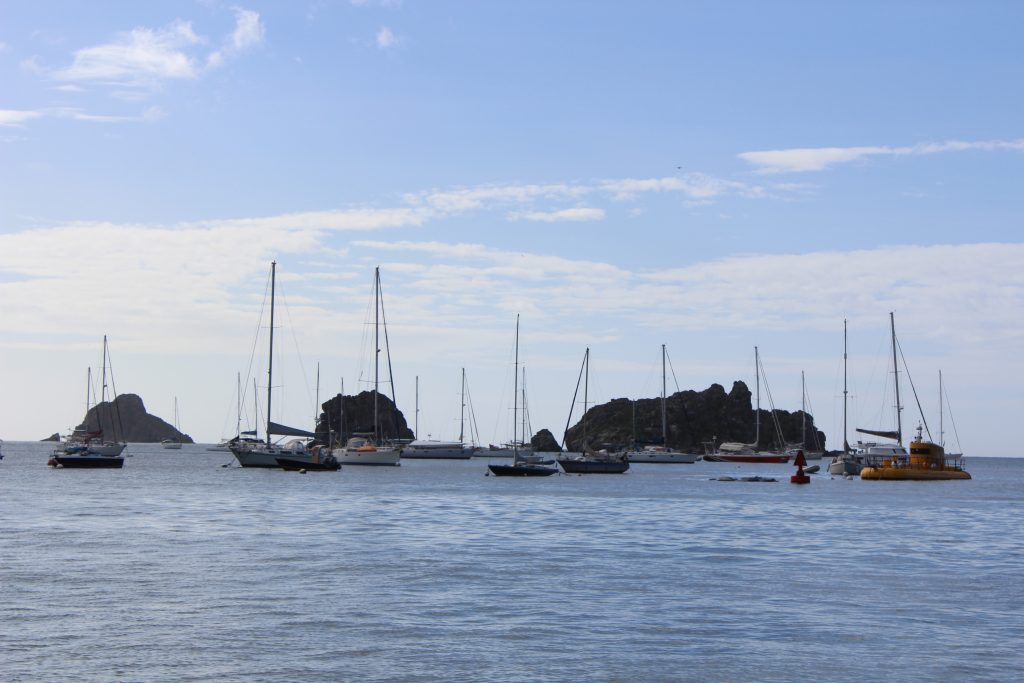 The ride back was way easier than the outbound journey, which we were thankful of. Nobody got sick that time around.

Back in port, we didn’t have enough time to do more than do a few laps through port before boarding the ship for a swift departure.

That night’s entertainment was a Celebrity Cast and Crew original called “Pearl”, which was a mashup of original songs with contemporary songs. It was fun, with some unique pyrotechnic and set design mimicking being under water, using a gigantic screen and aerial wiring. The story-line was thin, and just barely hung together. The singing was alright, as was the music. But we still found it entertaining and enjoyed being there.

Afterwards, we went to the Grand Cuvee for the second time to enjoy a formal Thanksgiving dinner with our waiter Raul. We had a great table, but again we threw him off with off-menu requests. He couldn’t understand that Brendan wanted the cocktail of the day, and then he disappeared for long periods of time, where secondary attendants tried and failed to fill in (poor grasp of English). Brendan ordered both a slice of the pecan pie and the pumpkin pie, for example, and it completely through off the attendant (again, don’t press the edge cases!). The meal was delicious, however, and the pumpkin pie was probably a B – still missing some of the richness and spices of a home cooked one, but passable.

I decided that I wanted a second slice of pumpkin pie (they were tiny), and so after dinner, we checked out the cakes in the buffet, assuming that there would OBVIOUSLY be pumpkin pie. Foiled again! So we had to resort to a cookie 😊.

Pretty soon after, we went back to the room, watched some HGTV (channels were limited) and went to bed, in anticipation of St. Lucia.

One thought on “Sint Maarten and St. Barths”