Our first stop took us to the American harbor of Frederiksted, St. Croix, part of the US Virgin Islands. We had no planned itinerary here and decided to play it by ear, since the 1PM bike tour through Frederiksted that we originally booked got cancelled and rolled in to one morning tour (which was too early for us). We slept in a bit, did the Aqua Spa Cafe breakfast (healthier options) and made it easily to shore directly on to a pier around 1030AM.

Shortly after we disembarked, we had some fun with our #TugLife #TugWife insider meme. 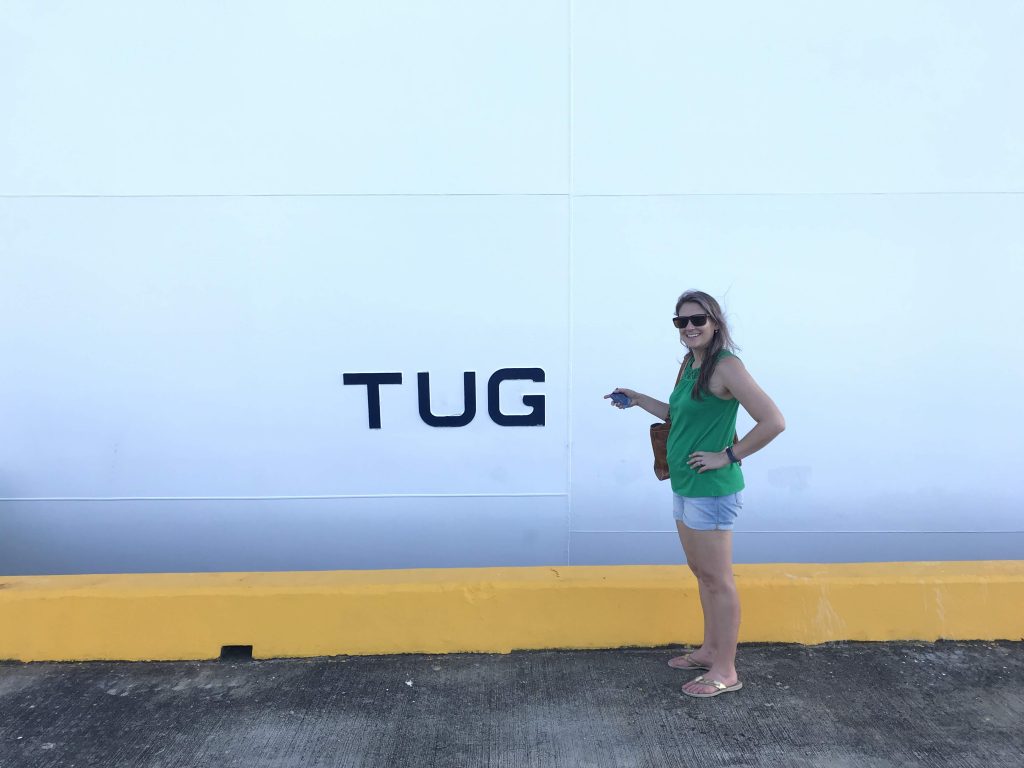 This was our first experience with the shore excursion entourage waiting for us as soon as we disembarked. 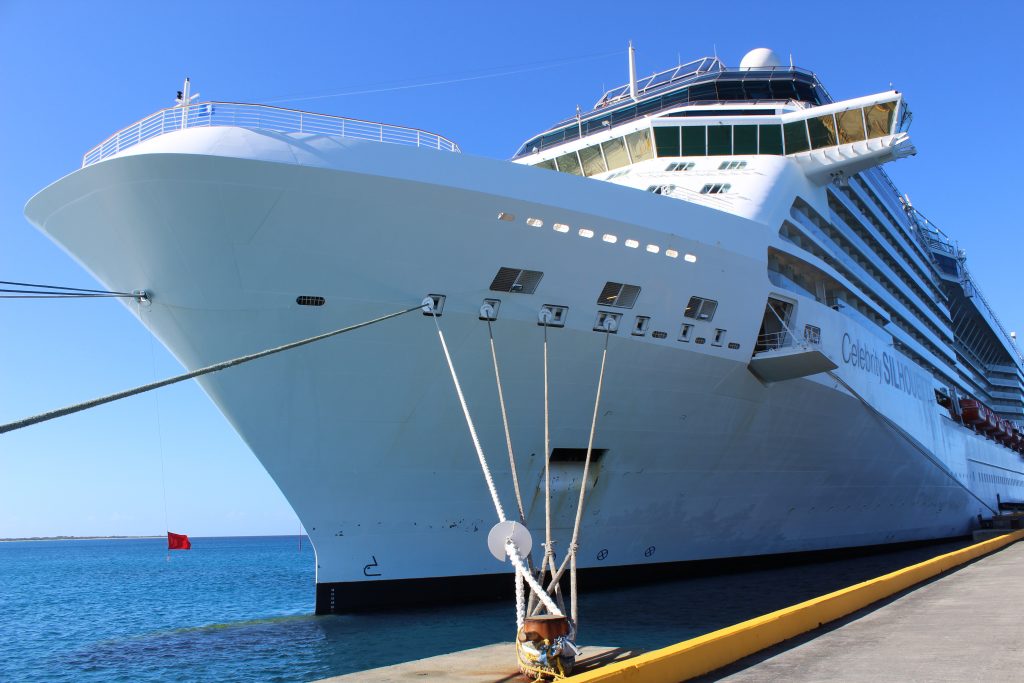 There was no problem at all not booking a tour through the ship, because there were at least 5 different tour companies with many options available for how to spend the day in the cruise ship terminal area.

Once through the port area, we decided to start by getting the lay of the land in Frederiksted. We headed to Market Square, which on a map appeared significant, but in reality, was nothing at all. Along the way we found the St. Croix bike tour that we could have been on and went over to listen to the guide explain some of the buildings in Frederiksted. Another older tourist with a camera was also lurking nearby. Then, we heard a voice from the rooftop “Nice camera!”. To which the tourist promptly ignored the comment, and rushed off in a huff, thinking he was going to be robbed. We looked up at this point and noticed two guys on the upper floor of the building – a Caucasian fellow and a Hispanic looking fellow. We started up a conversation. Turns out the white guy was an American mainlander who had moved to St. Croix in May, and the other guy used to live in Boulder, Colorado. We had a good laugh and eye-roll about the nervous Nellie tourist who thought he was going to be robbed due to friendly conversation. He asked them what we should see on the island and explained we hadn’t done any research. They recommended a bar on the waterfront promenade called Louis and Nacho, beyond which they recommended that we not even bother with Frederiksted, and anything inland from the waterfront promenade was either boring or not very pleasant/safe. Instead, they turned us on to the Christiansted, the capital, which was a 30-minute taxi ride away. They even were nice enough to let us know where to find the island shuttle to take us from South to North. Had we not wanted to go to Christiansted, we would have asked them to join us for lunch.

We made our way along the waterfront back to the pier and found the island shuttle mentioned and booked two round-trip tickets for $16/per person. As soon as we paid, we found a large enough group ready to go and found two seats towards the back on the shuttle. The ride was easy enough and 30 minutes after traveling through the center of the island, we were in the capital city Christiansted as promised. The shuttles would periodically head back to Frederiksted as soon as enough people were ready to go, with the last one leaving around 4PM.

We spent a few hours walking on the waterfront, where we saw sea turtles and fish in the aquamarine, clear water. 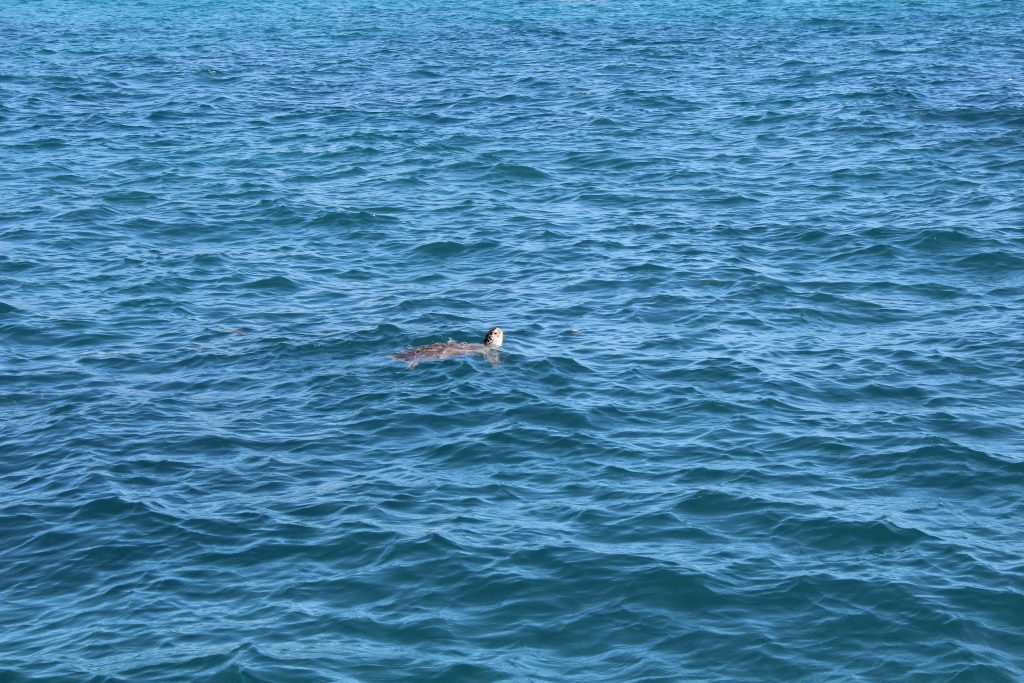 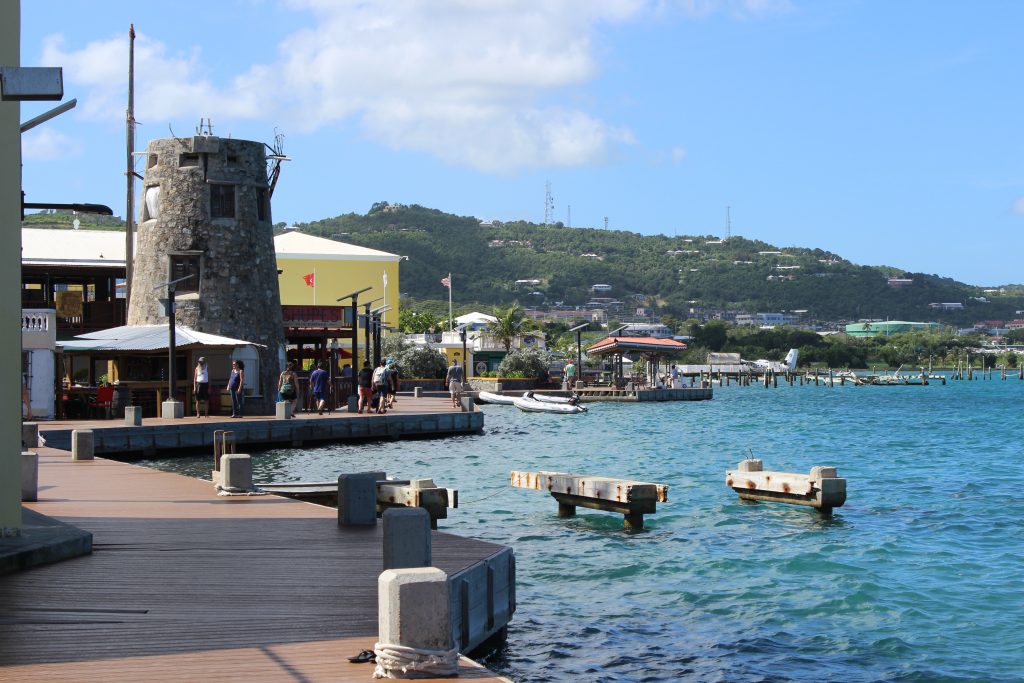 As this was our first port to get internet after two days at sea, we also spent some time sucking down emails through our AT&T service, which extended to St. Croix. I had to unfortunately deal with an incident of fraud with Chase and ultimately cancelled my credit card. It was good timing to have this happen on the only day I would be able to make phone calls and really take care of something like this. Here was the view from the little bench where we sat doing this along the water – we were looking at a tiny island with a resort on it. 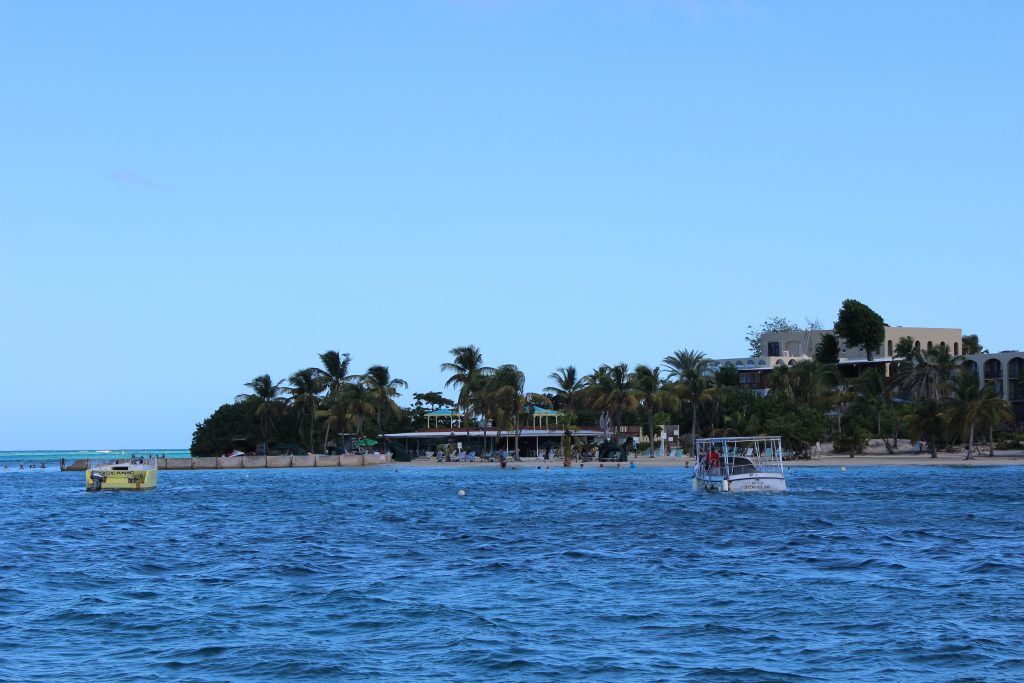 After dealing with that situation, we continued to check out souvenir shops and art galleries and had some nice conversations with several of the shop keepers. There were a few that stood out. First of all, we had to take care of an errand – printing out our Viator voucher for our St. Lucia Island Delights tour, which we did not book through the ship. We found a cell phone repair shop called iTekPlanet in one of the alleys right off the boardwalk, and hoped they would be able to help us. The guys inside were super friendly, and gave us access to their computer where Brendan pulled up Gmail and was able to print it out right to their printer. Despite even having another customer in the store, they graciously allowed us to continue, asking nothing in return. We were already starting to feel the kindness of the locals on these Caribbean islands. Unsolicited by the proprietor, we promised to write a review for them on social media, and Brendan ended up putting it Google + later that night here. They were really grateful and surprised that we offered.

After that, we strolled around with less purpose. We noticed a lot of wild chickens and roosters. Apparently that was a thing, we later discovered from some of the shopkeepers. 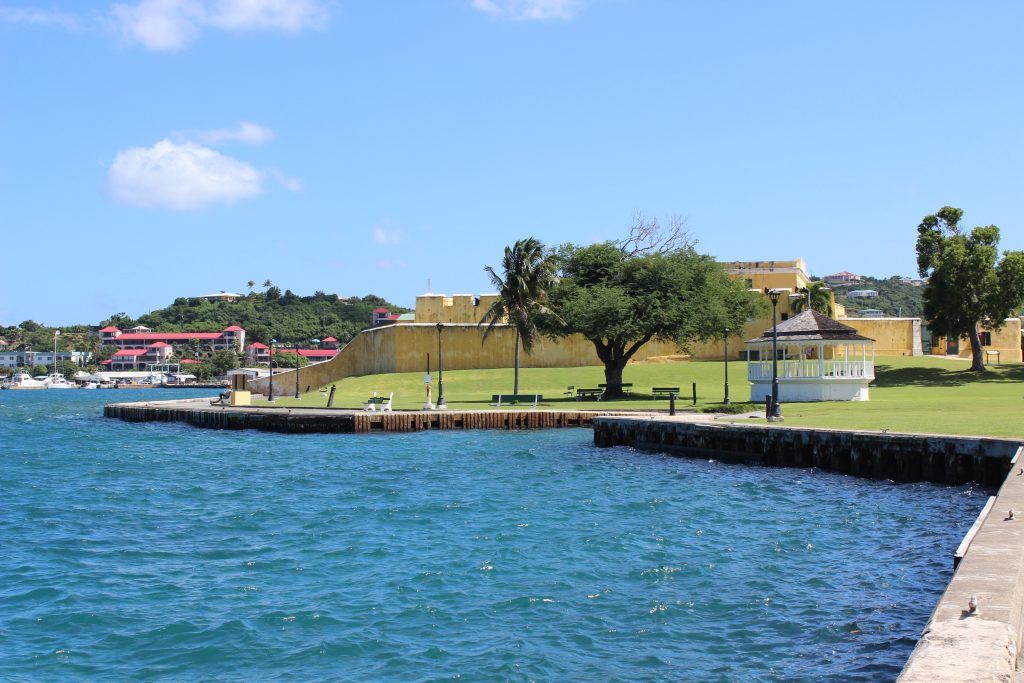 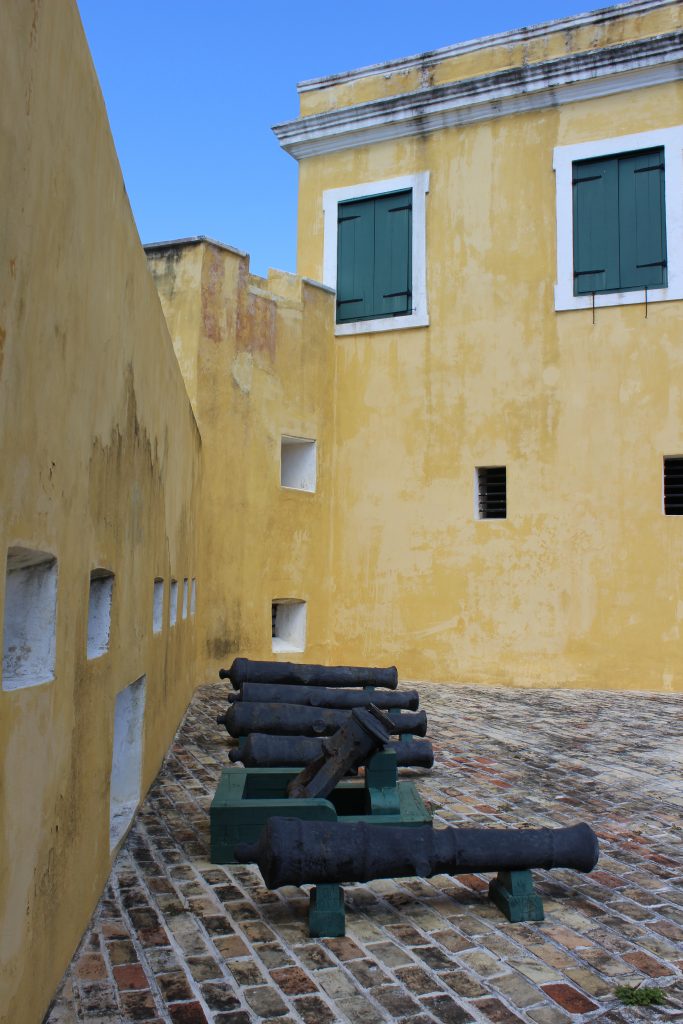 We wandered in to a boutique manned by a black lady that used to live on the mainland but got tired of it and came back to St. Croix (we think she was born here). She told us about the hurricanes that came through and knocked off her sister’s roof, and we talked about some of the art in shop, including a pineapple “Welcome” plate that wasn’t for sale but that everyone wanted to purchase. We ended up buying some Starfruit Syrup, which she said was delicious and that she put it on her toast every morning. She also told us about the “jump ups” every Friday night – which are essentially parties centered around art, music and entertainment – with occasional appearances of Mocko Jumbies.

Here was a clock tower in the area where we walked on our way back in to town from the fort – typical architecture of St. Croix. 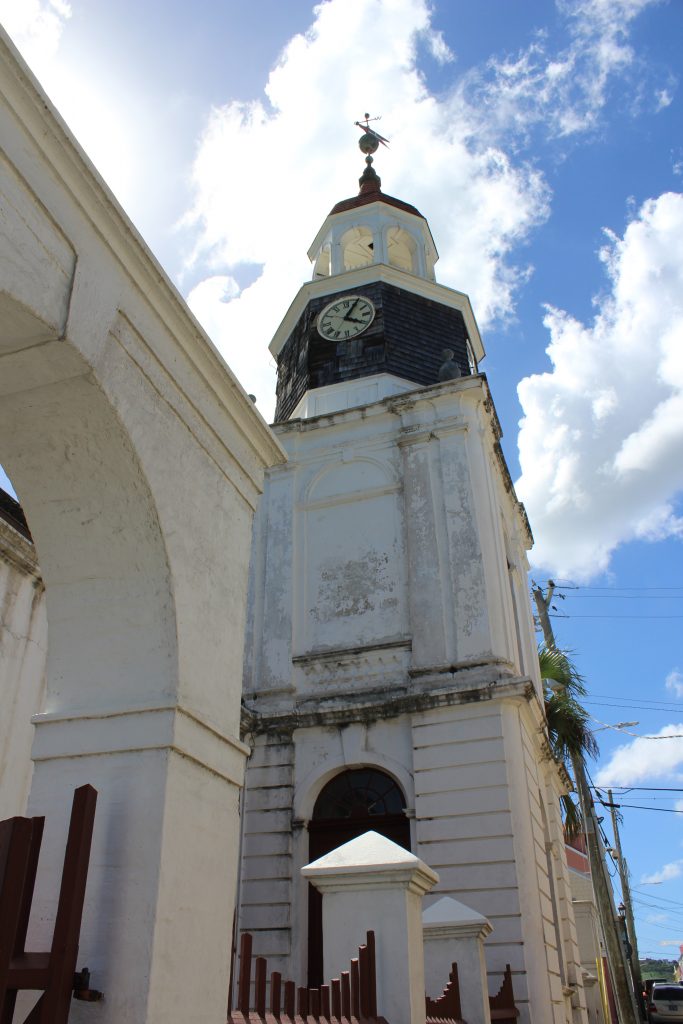 We found a few cats afterwards that led us to an art gallery owned by a lady named Barbara, who painted Mocko Jumbie and traditional island scenes, but also incorporated the wreckage, emotion, and destruction from the most recent hurricane in to her art from that time period. Barbara spent about 15 minutes explaining all her art, the motivation for painting it, and the different styles and dresses of the Mocko Jumbie. We learned that it was originally brought from Africa, and when it landed in the Caribbean, the slaves touted it as a celebratory and carnival element, when really it was a cultural and religious tradition they were trying to hide from the colonists. So, lying dormant with a disguised purpose, it was able to survive. We learned about the raffia and ruffles on the costumes, which were quite feminine looking (she even described it this way). The stilt walkers were supposed to cover their faces and not speak as well, although now they didn’t always practice in that way since they mostly worked for tips from tourists. We actually got to see one when we were back in Frederiksted later, near the dock.

We wanted to buy the $900 Mocko Jumbie hurricane painting from her – it was her best work – but unfortunately the price was not right for us. We thanked her for her hospitality and promised to spread the word about her art back home. If you’d like to take a look at her gallery, it’s all online here.

Her stray cat ushered us out of the shop and back to the street, where we decided to call it day and get back to Fredericksted for a late lunch at Louie and Nacho’s. We had great timing – as soon as we were at the shuttle, it was ready to depart, and 30 minutes later we were back near our ship.

We walked once more on the promenade on the water towards Louie and Nacho’s, and passed an actual Mocko Jumbie on the way. We tried not to get too close because we didn’t want to engage and therefore give $$$. 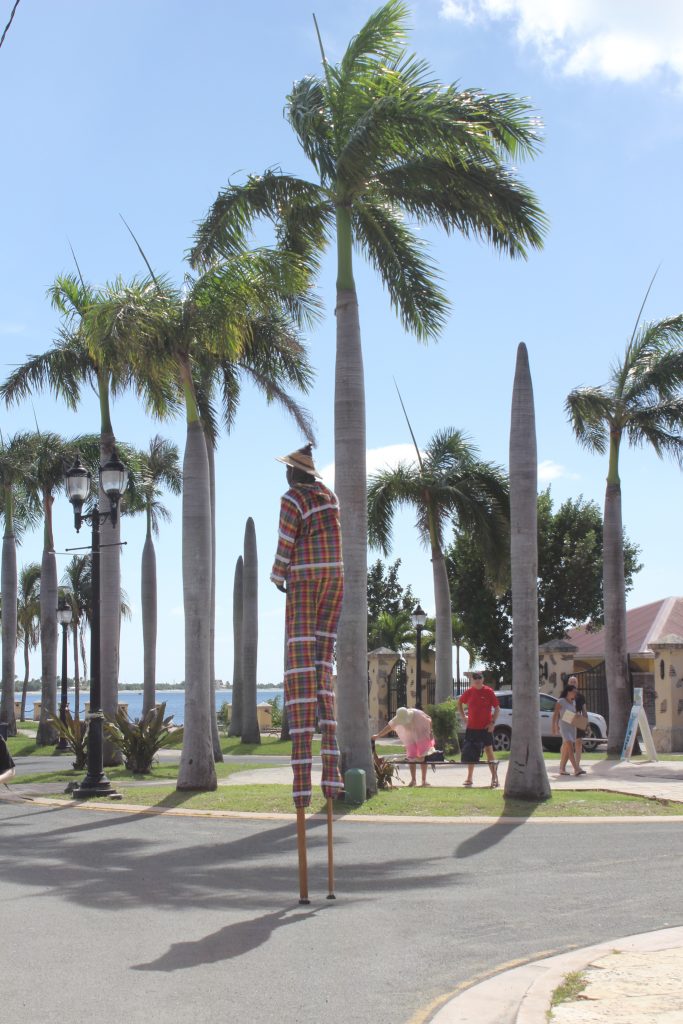 Louie and Nacho’s was located towards the end of the strip on the waterfront, up some stairs, in a rooftop bar concept. Just look out for the frog. 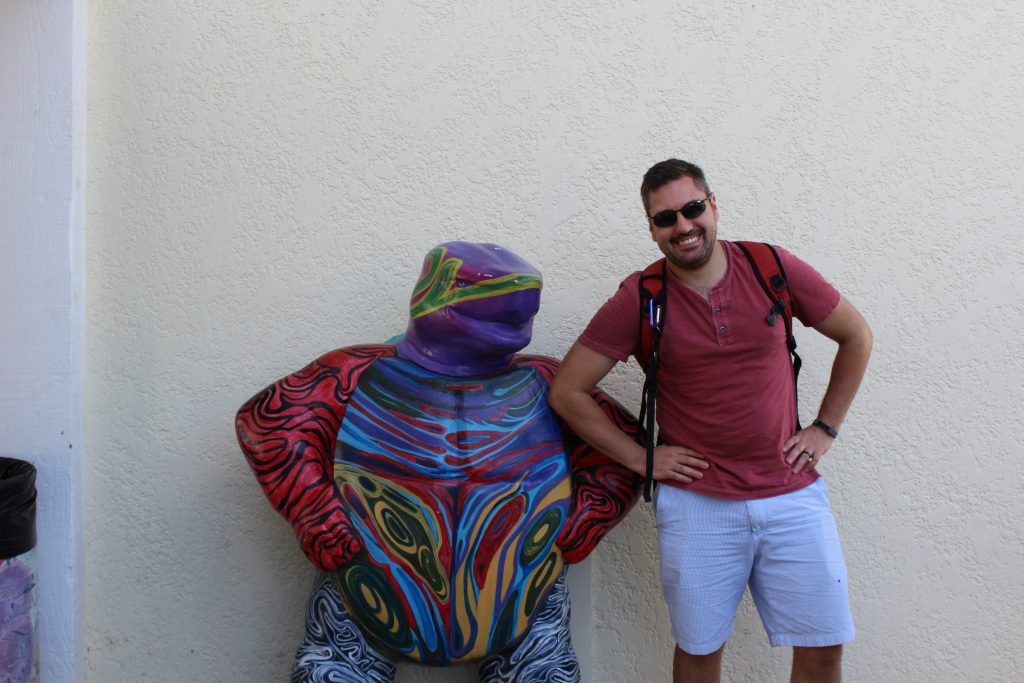 We really enjoyed our time there. It was manned by two white ladies, one of whom reminded us of our friend Katherine back in Denver. 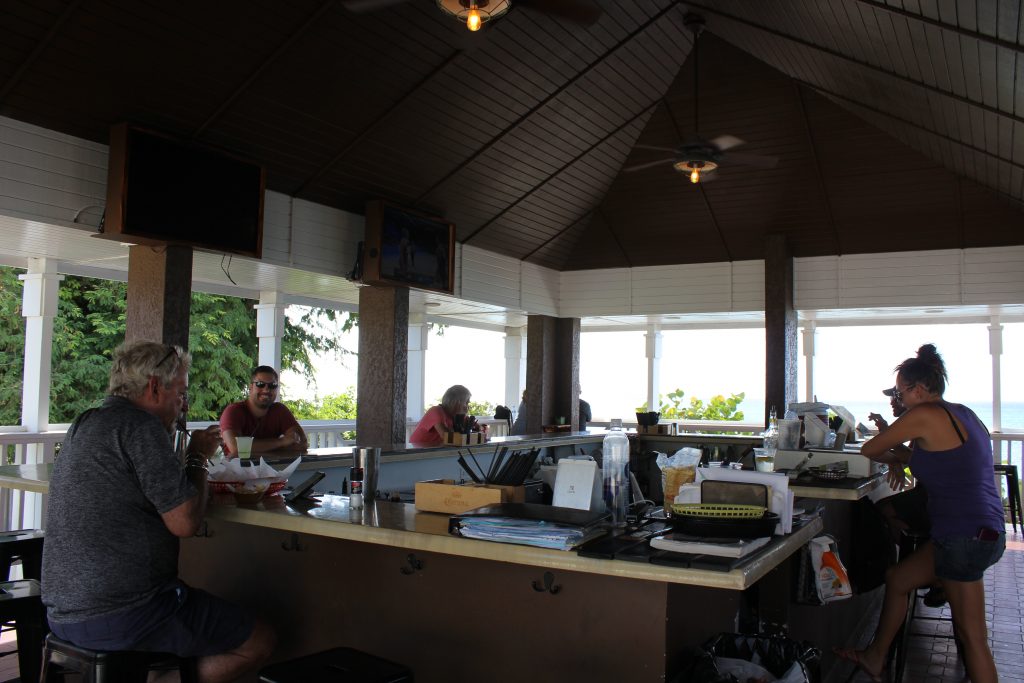 They made some bitchin’ drinks that actually got us buzzed (it’s hard for us at sea level since we’re used to altitude) and the was good too – we had some chips and salsa and street tacos. 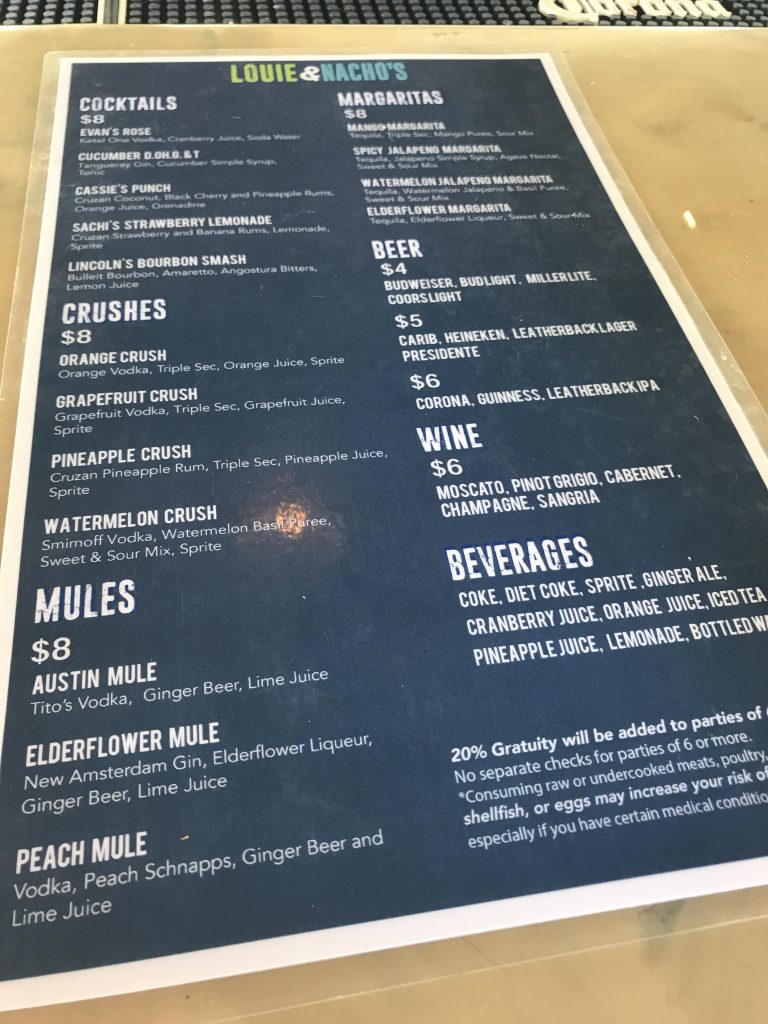 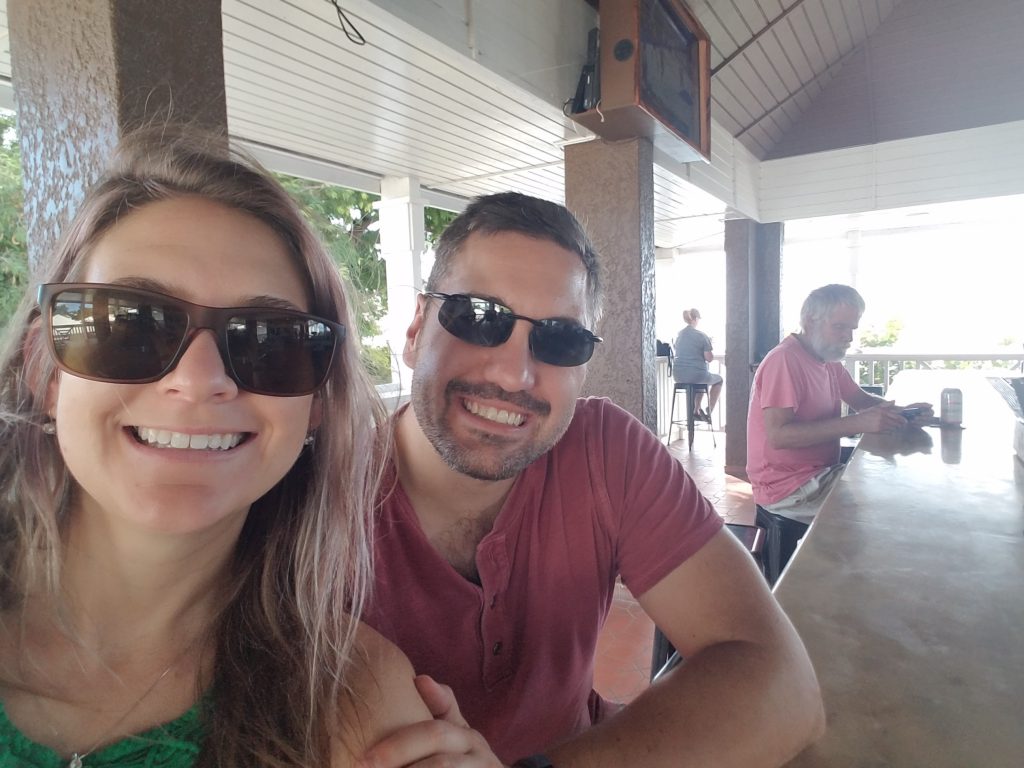 We even got to have some fun with one of the waitresses’ puppy, who she decided to name Jameson.

I’d highly recommend Louie and Nachos and it was obviously where the locals went, as we were the only tourists there. 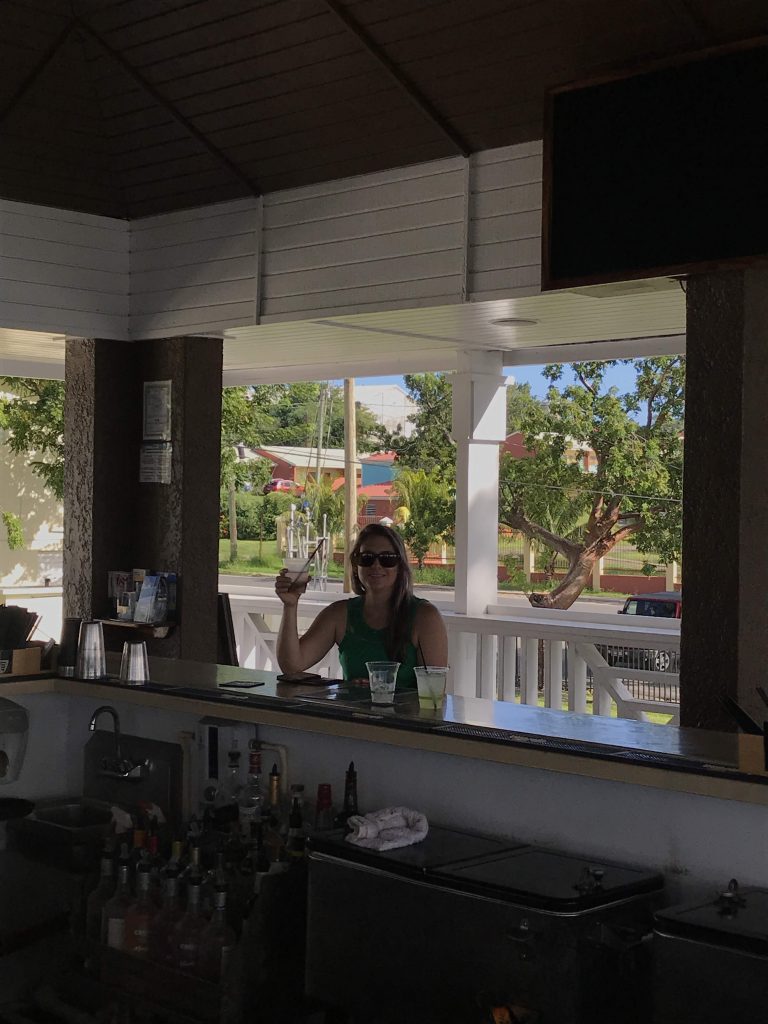 It was late afternoon at this point and time to head back to the ship, and started to get ready for that night’s entertainment. On our way back to the pier we saw a perfect encapsulation of modern life – a bunch of our fellow cruise ship passengers sucking down internet prior to re-embarking. Everyone was looking down! 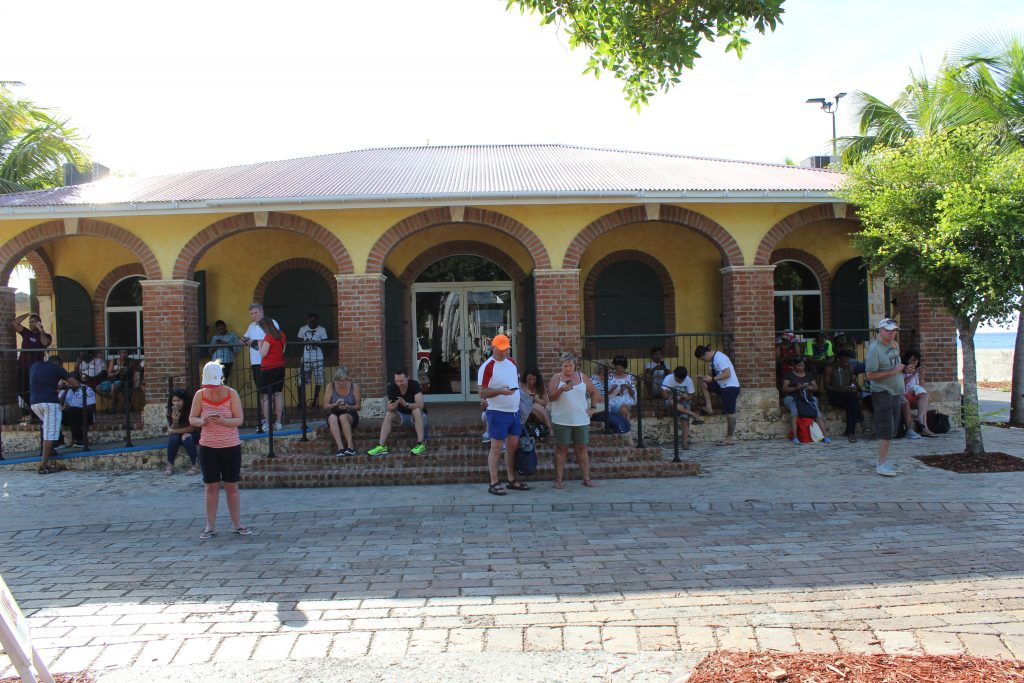 The show we went to that evening was unremarkable – Darren Dowler – a singer and impressionist (really an entertainer) – who did an homage to himself. We are pretty sure he wrote his own IMDB entry here (full of praise!). He has a very wacky introduction montage of all the B-grade bands and movies he had performed in, and half way through the show, we played some clips from his two current movies, both terrible. The audience did not know how to react. He drove some people out, but he also drove some people in with his charisma. I wanted to hate him, but I actually admired his authenticity and sense of humor about the fact that he was a supremely talented musician who brushed paths with fame numerous times in his career, but never caught his own break. He pretty much admitted this in his closing remarks, and shared a laugh with an audience who had already puzzled this out.

After the show, we went up to the buffet and I experimented with the build-your-own stir-fry, followed by a build-your-own cookie ice cream sandwich.

We headed to bed early as we gather our energy for our next port of call – St. Maarten.