Our third port of call, Castries, St. Lucia would be a day of driving around the island through a proper guided tour that we organized outside of the cruise.

After a quick room-service breakfast (which we finally caught on to write in water and ketchup, but forgot to write in coffee mugs for our coffee), we disembarked to meet our guide, who had a sign waiting for us in the area one would expect. St. Lucia was our first stop where we organized our own tour outside of the ship – the itinerary however was identical to the shore excursion itinerary called “Island Delights”. It was basically a 5 hour drive around the island, with a number of stops along the way for pictures and instruction. We loved the tour company and would highly recommend them – and we worked with a guide named Stan. There were two other couples and a solo traveler with us in our group, and it was a good size. Nobody was too slow.

Our first stop in St. Lucia was an overlook where we got some views from the interior mountains to the harbor, including some great Celebrity Silhouette shots. 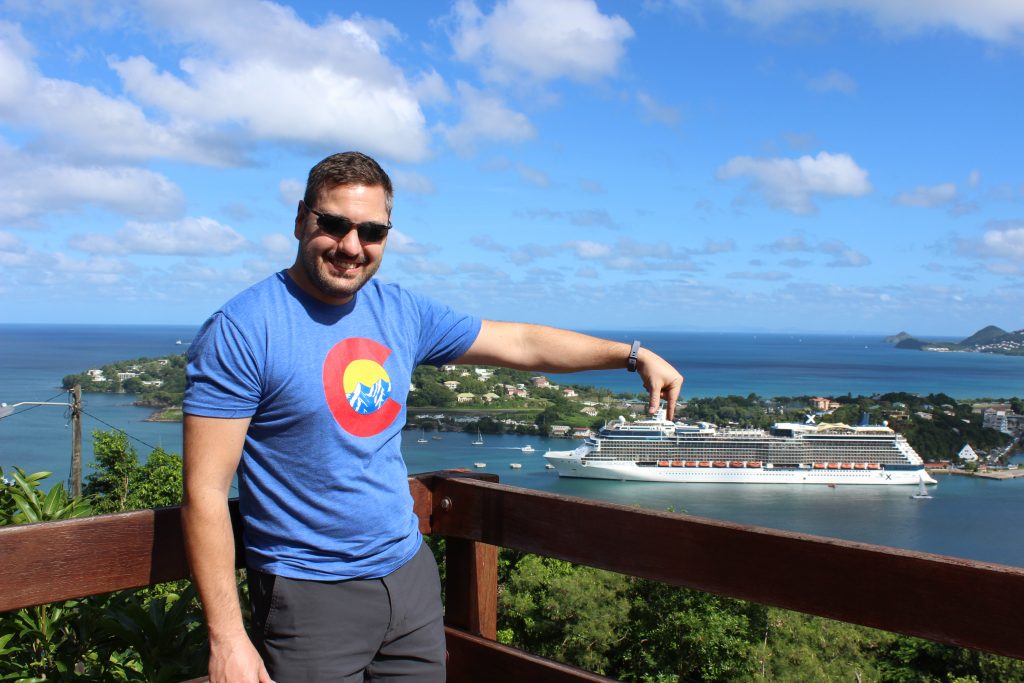 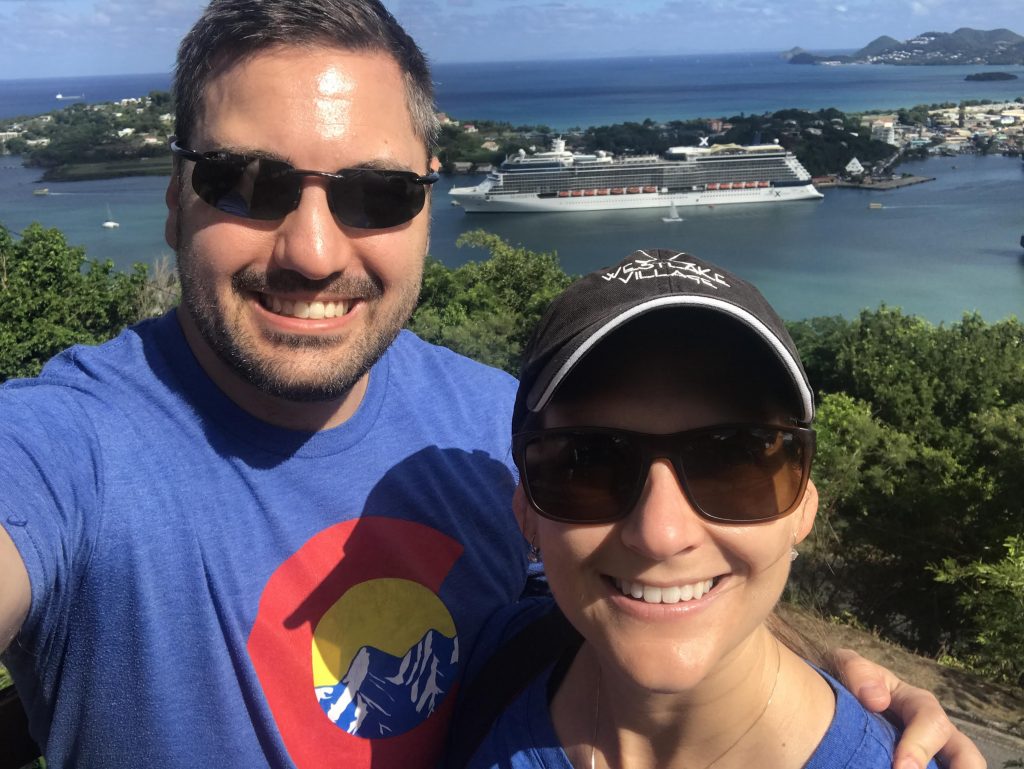 We also were starting to spot the usual pattern of the same souvenirs and junk at every photo op or tour stop, appearing literally on every island except for St. Barths. The fact that the sellers were not particularly aggressive and took no for an answer was a nice surprise – but they were still moderately aggressive, especially compared to absence of aggression or anything at all on St. Barths the day before. Some islands were certainly less aggressive than others, St. Lucia being just above average.

Next stop in St. Lucia was a perfect little hidden cove called Marigot Bay, which was where they filmed portions of Dr. Doolittle. We would have loved to come back and stay at one of the resorts down below and to enjoy the perfect, sheltered white sand beaches below. We felt St. Lucia was on the rise and was more wild and less exploited than other islands. It was also the first mountainous island we had encountered, which of course harkened back to our home in Denver. 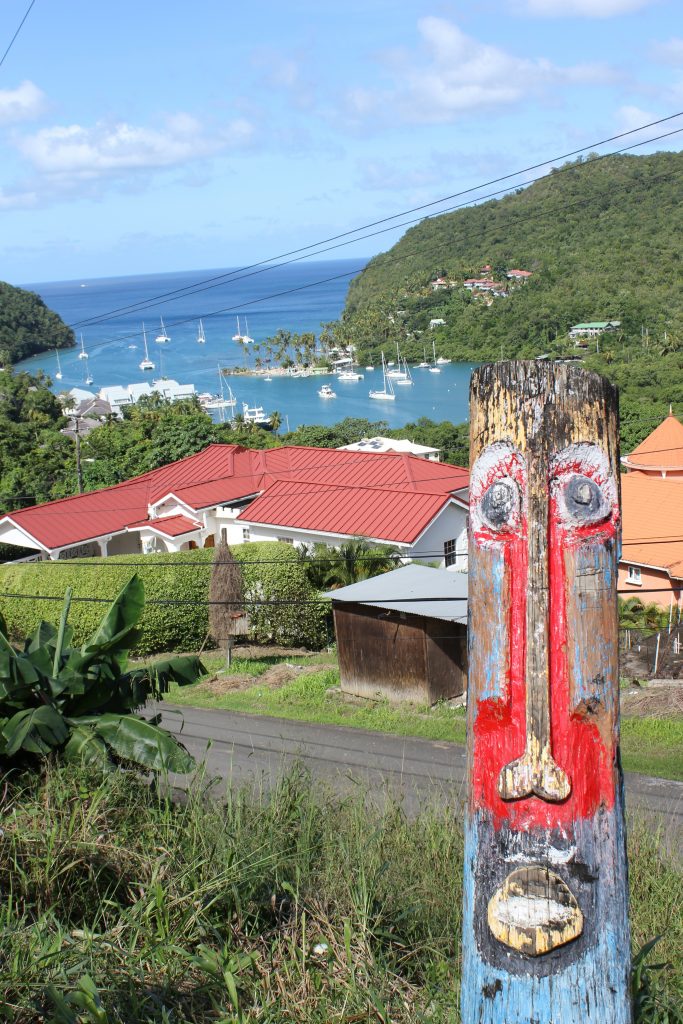 Continuing our journey on St. Lucia, we hit the fishing village of Anse la Raye and stepped out for 15 minutes to take some pictures and a walkabout. There was not much going on other than some fisherman cooking a fish stew in a hole in the ground, and people relaxing around the park. We were surprised to see as many people as we did out and about mid-day, appearing not to be engaged in any work or labor. We wondered about unemployment and government services on these islands. 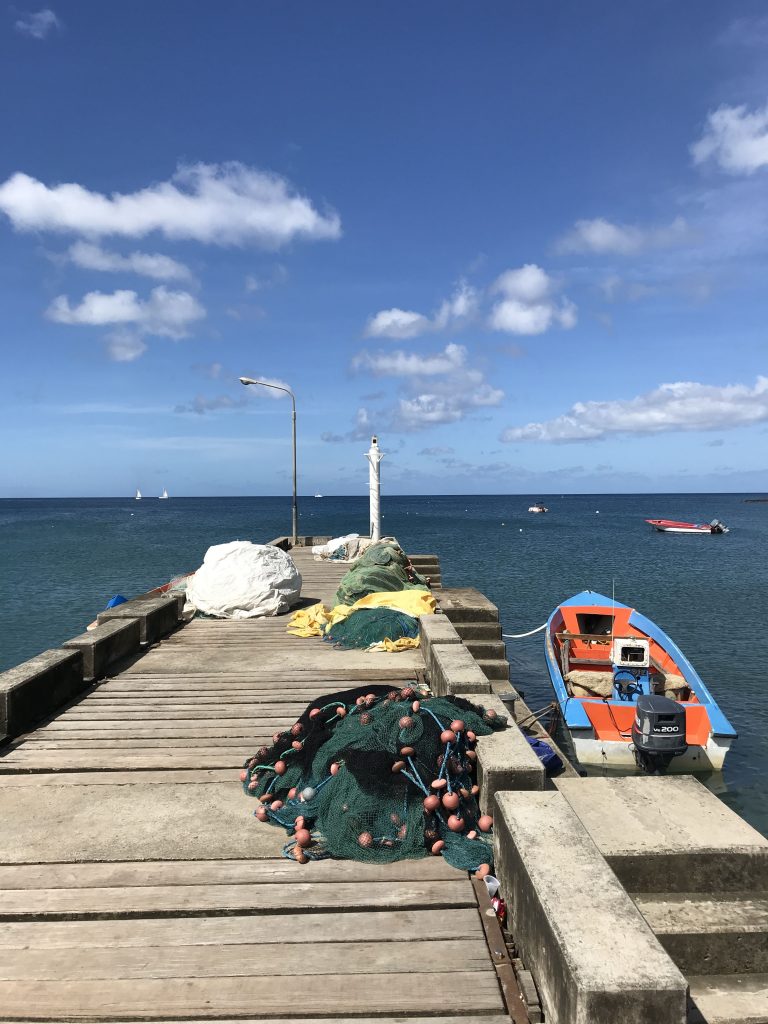 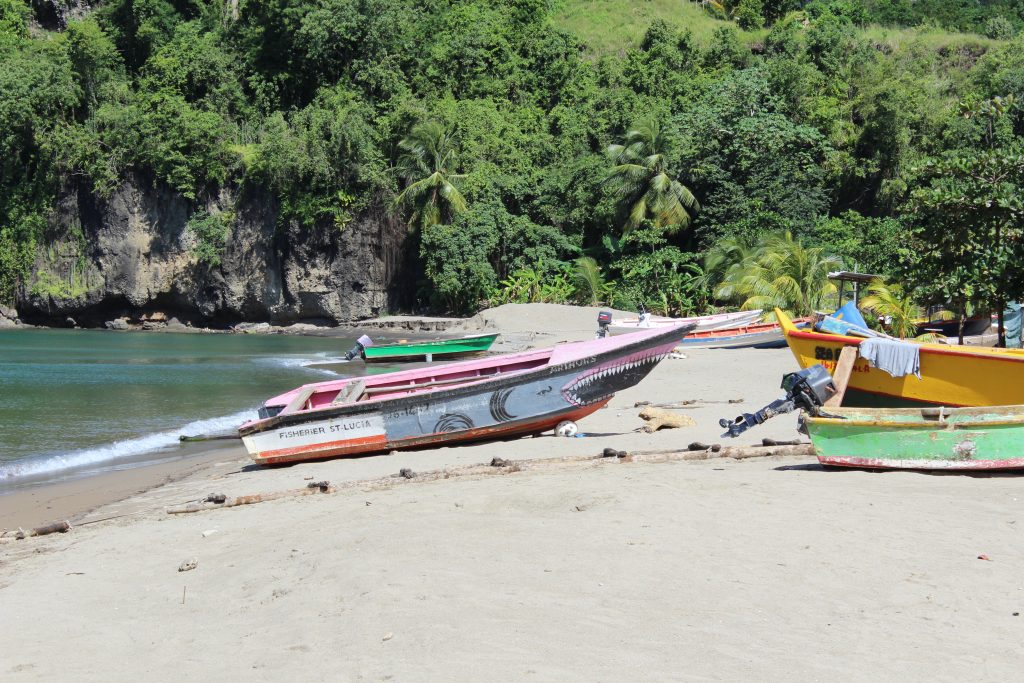 We visited a banana plantation on the way to the volcanic area and learned about St. Lucia’s banana production (a net exporter to neighboring islands). One of the surprises was that ripe bananas stay green and can be picked! The other surprise is that all the banana clusters were bagged with blue bags to protect the fruit and create a micro-climate, and that blue was apparently the optimal color to do so! 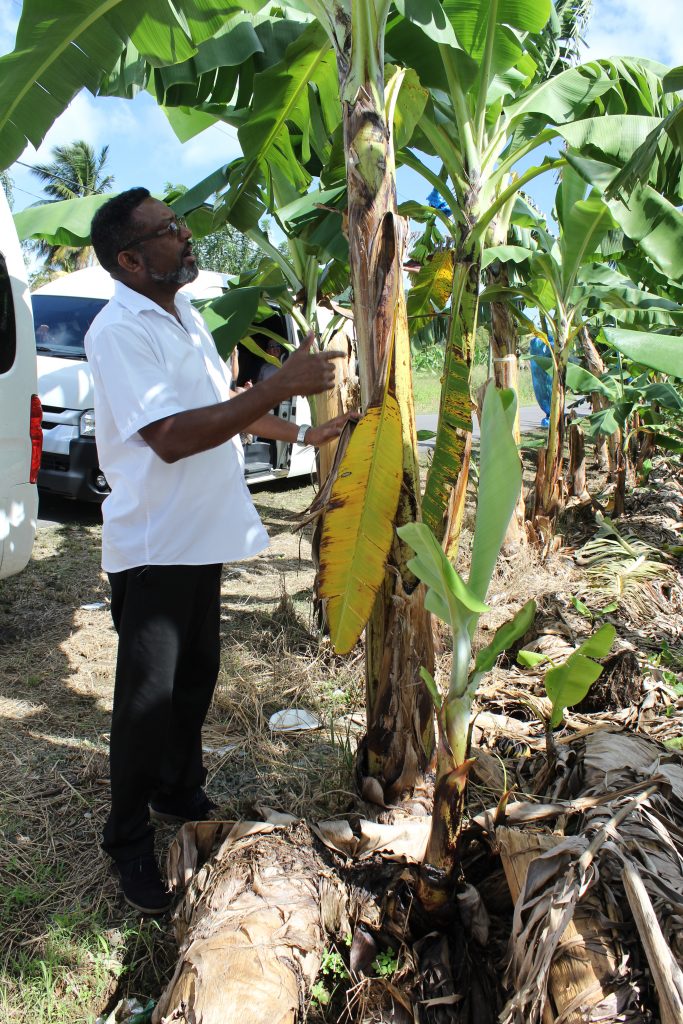 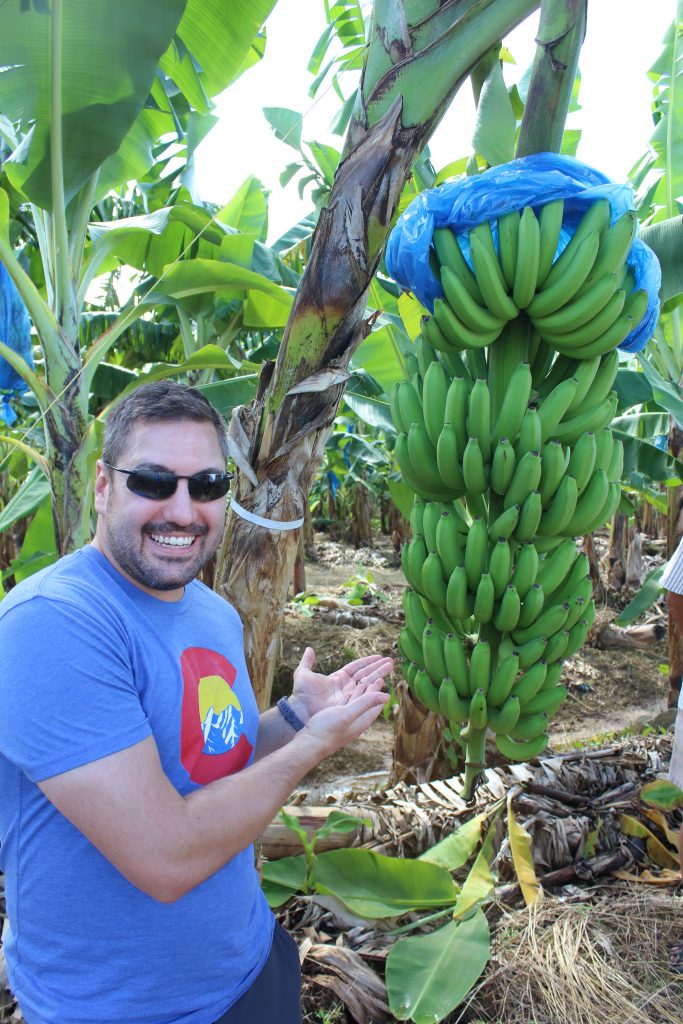 Then we drove through Canaries on the way to Soufreire, where we went through the Diamond Botanical Gardens. We enjoyed learning from Stan about the various flowers and edible plants, and I took several pictures of interesting flora and fauna. Waterfalls and wildlife were present as well. 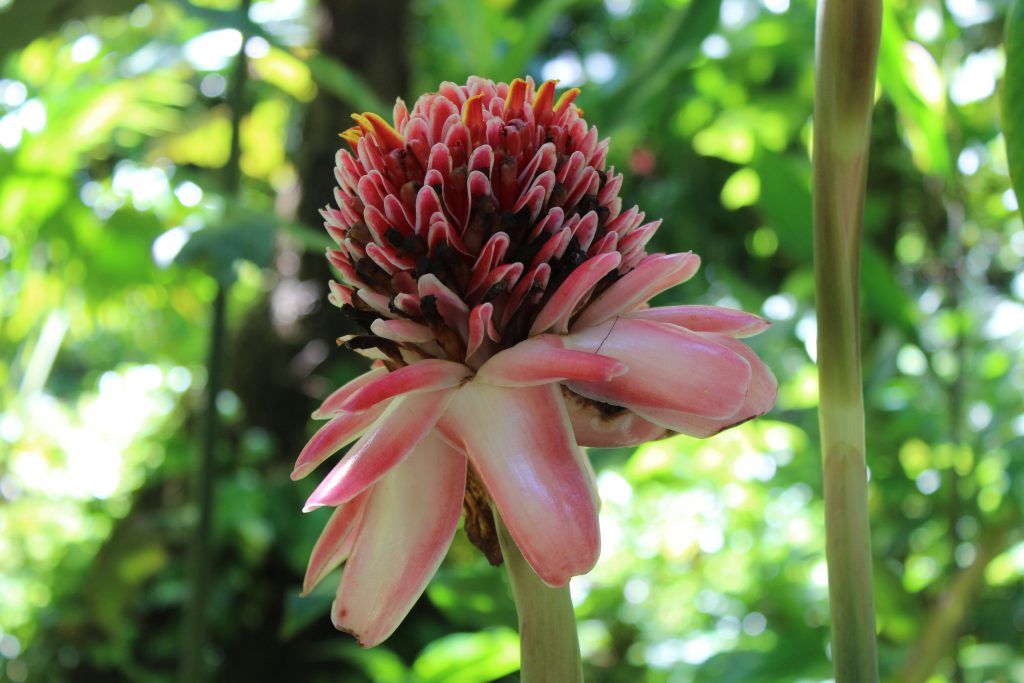 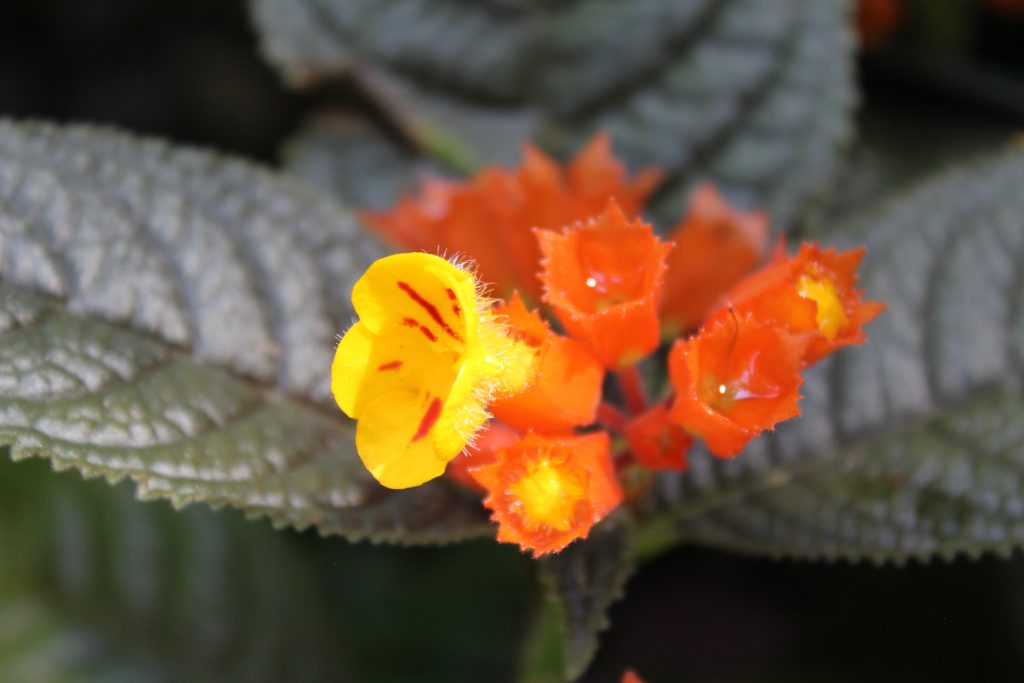 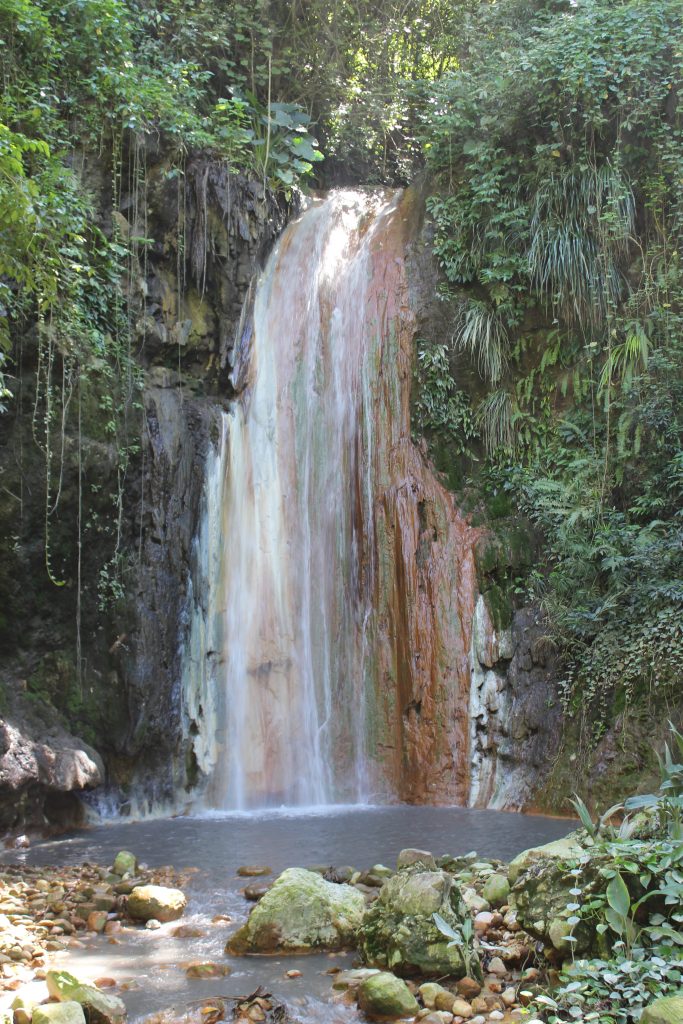 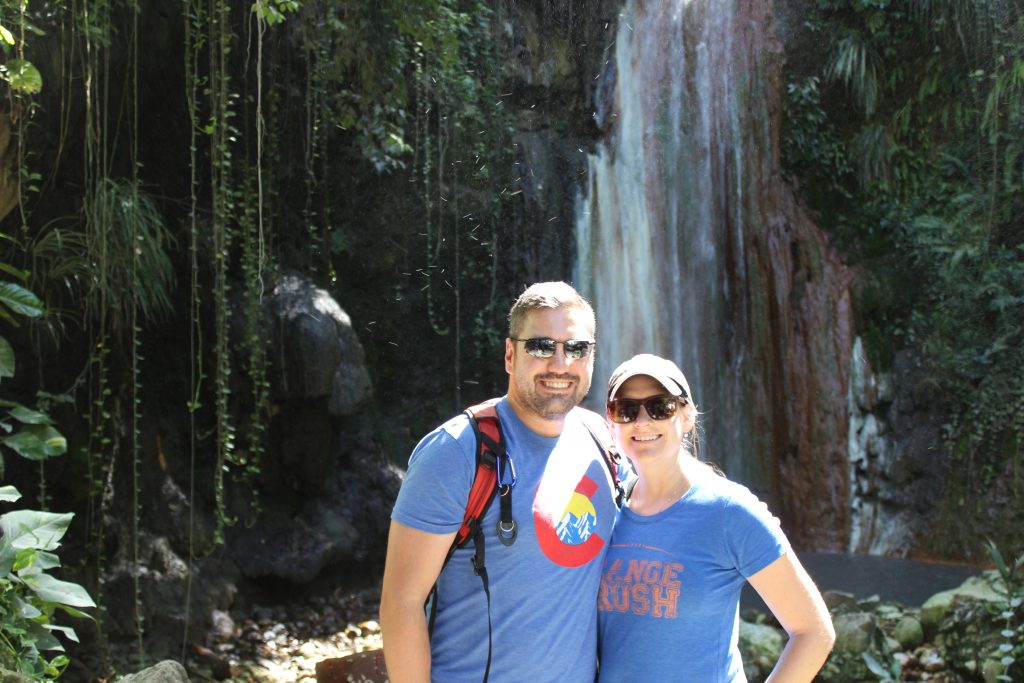 These little guys came and joined us as well – can you spot the iguana on a soursop (one of the local fruits)? 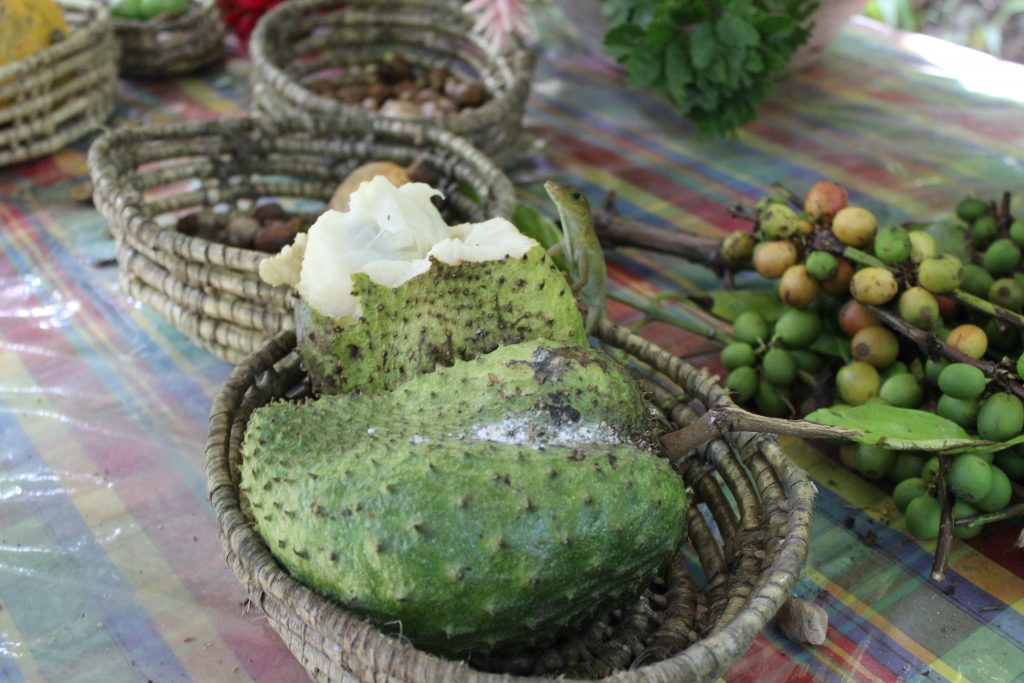 We enjoyed the local beer, Piton, at the botanic garden shop as a substitute for lunch – very enjoyable! 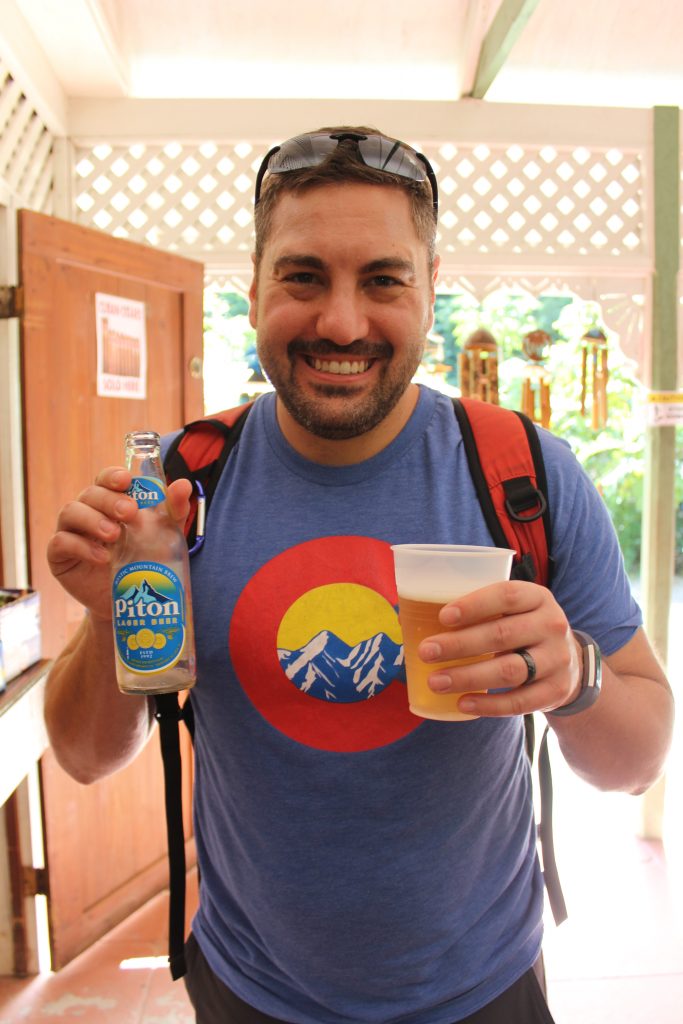 We then continued along our way to the Pitons and the base of the volcano, where we saw hot sulfur springs gurgle and bubble. Our guide there mentioned that when he was a boy, he would walk down there in the crater and even boil eggs. But in the past 20 years, he only went down while escorting geologists, as it had become more dangerous. 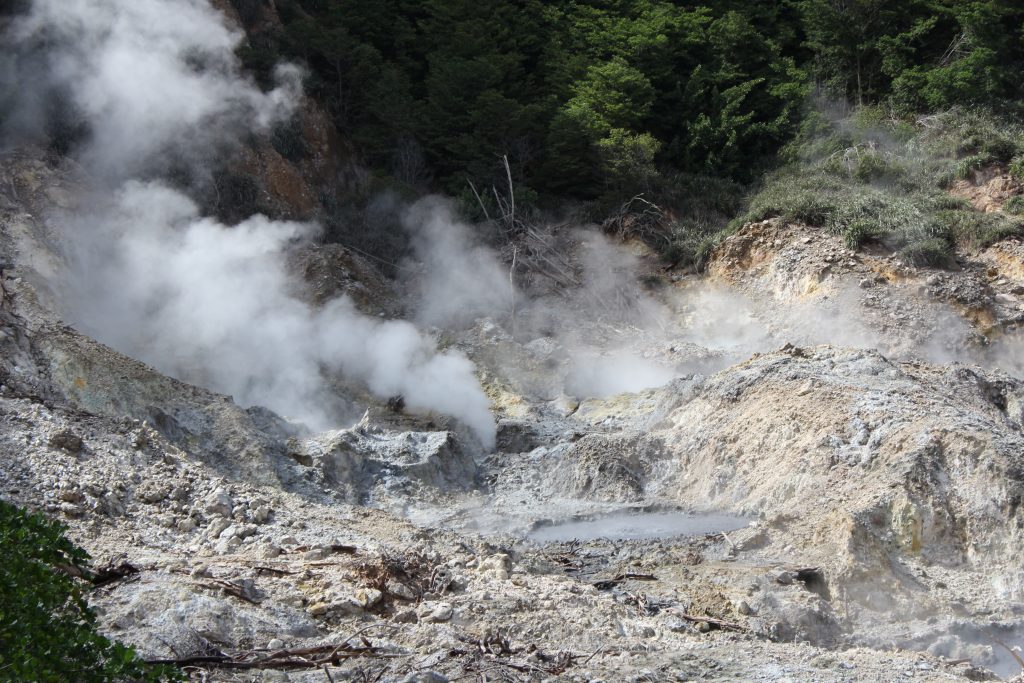 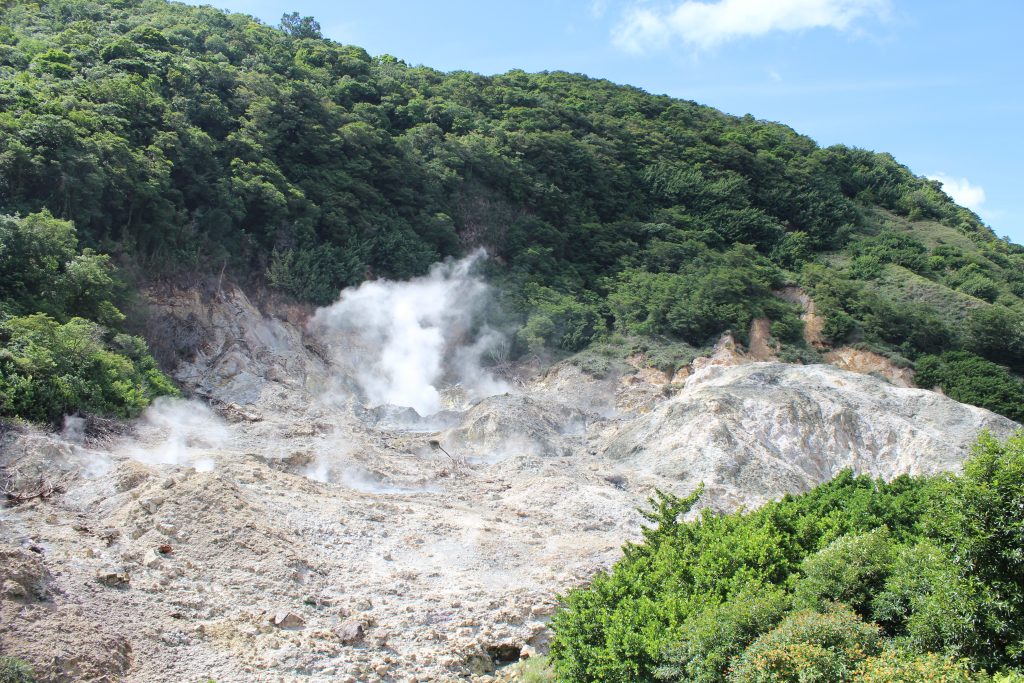 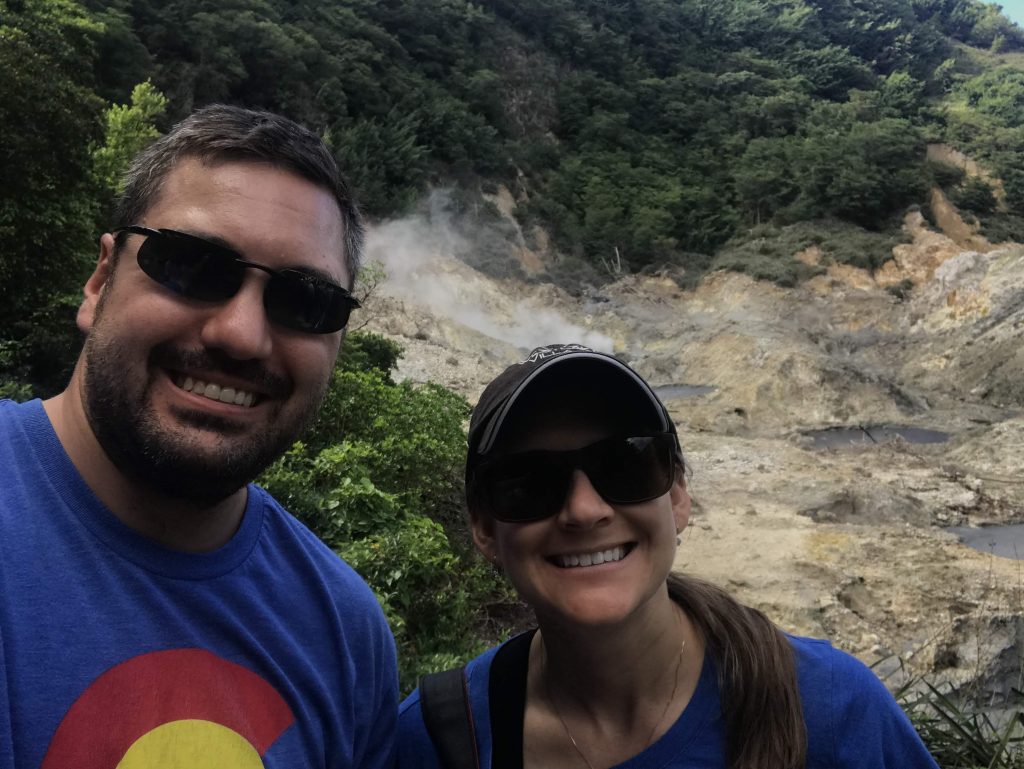 We looked in awe at the Pitons – they were very steep but could be climbed in 4 hours. Nobody from our cruise would have had time to do that while leaving margin to make the ship departure. 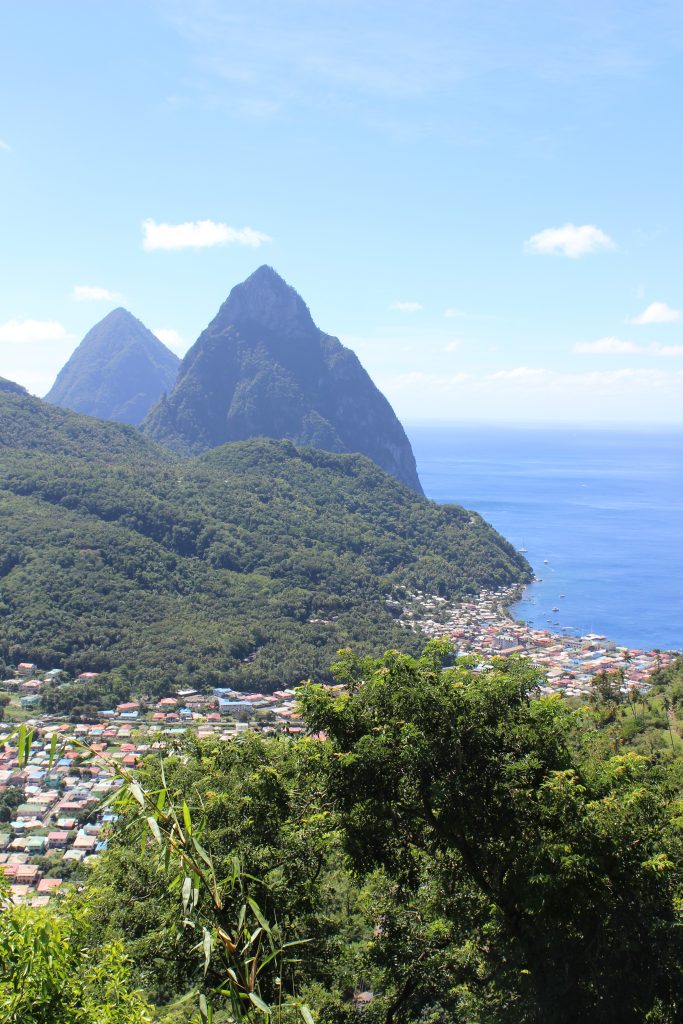 The Pitons in St. Lucia

On our drive back to the ship, we concluded that this was a beautiful, interesting, clean island, where people were quite friendly and relaxed.

After returning a few of the other guests to their respective resorts, we returned to port. In all the shuffle of getting off the van, we forget to tip Stan – and he didn’t seem to be expecting it in any case. We spent a moment perusing the port, and soon after found ourselves back on the ship. We went up at the tail end of lunch and frequented the buffet to grab some pasta. We also saw an amazing FULL rainbow lacing the island of St. Lucia.

The rest of the day was quite relaxing and non-eventful. We had already decided to do a quiet night in the room, watching movies and ordering room service that night. On the Movies On Demand section of the in-room entertainment system, we found Mama Mia 2, and several Celebrity movies about the making and operation of the ship. It was all highly entertaining! We also discovered that the room service attendant thought that a hot dog was the same as a hot dog sandwich – that was a head-scratcher for a while. We ordered Caesar salads, burgers, hot dogs, and fries and called it a night. It was a really nice mid-way relaxation moment that we indulged in, and went to bed early, anticipating a long sleep since we had no plans for Grenada, the next day.