Dave and spent the weekend near SFO China Town after he completed some business in Millbrae on Friday. Dave came in earlier to Millbrae on Thursday evening so that he could get to sleep at a reasonable time. The plan was for me to get in much later since I had some work meetings late in the afternoon.As such, I came in late Thursday night on a flight that I almost didn’t make based on a Low-Cost Carrier (Frontier) fuck up. Read more about that soon on my tripchi blog. Ultimately, I made it in to SFO around 1230AM and luckily, the 24-hour free hotel shuttle was still in service (you never know), and came within 10 minutes of me calling (they said it could take as much as 25 minutes, and Dave warned me about the slowness of it from his experience earlier in the day).

Since we wouldn’t be at our SFO China Town hotel until Friday night, the plan Thursday night was to stay at a hotel called The Dylan at SFO in Millbrae, and then take the BART in to SFO China Town near the Fi-Di (Financial District) Friday afternoon for a fun rest of the weekend in SFO. The hotel shuttle (which was really a shared shuttle between several hotels), dropped me off right out front and the night manager already knew I was coming and had a key made for me (with a slight attitude).

We had a room on one of the upper floors, facing the construction zone that geared up every morning (loudly at 8AM). This did not make the best experience for working remotely (from the hotel room) on Friday.

Dave set off in the morning and I did my thing, having to weave in a 1PM check-out (even though the maids kept knocking on the door early despite my do not disturb sign). I worked in the lobby after checking out, trying not to go crazy from the sound of jack hammering. All in all, it was a pretty underwhelming hotel (which was really a motel masquerading as a hotel by adding the word “boutique” to it to garner a higher price) considering it was a pricey $150/night. The breakfast was similarly awe inspiring, the rooms tiny, the service (other than the day manager who was delightful) horrible, and the price way, way to high (it was the only game in town). The only thing seemingly redeeming about Millbrae was the cute downtown, which I got to walk around when I was waiting for Dave to finish up, as well as access to the BART and Caltrain station.

By 3PM, we were on the BART (located right across the street from The Dylan), and for about $4 a piece, we were on our way to the Montgomery stop and then on to our next hotel (The Triton Hotel) and weekend in SFO China Town and beyond.

The SFO China Town hotel had an awesome location – obviously right outside of the China Town gate, and about 3 blocks from the Montgomery BART stop at the intersection of Grant and Bush.

Unlike The Dylan hotel in Millbrae, The Triton has class and style at a modest price (also $150 a night), in a spectacular location – a perfect launching point for our weekend in SFO China Town. The rooms were small but well appointed, quiet, and modern. The hotel staff was friendly, accommodating, and there was free wine at 5PM. There were only two downsides to The Triton. The first was that we weren’t able to get our room cleaned on Saturday because we weren’t out in time for the maids to come, and they only came by at a certain time. We were, however, easily able to get more towels when needed. The second was that there was no “Do no disturb” sign (which we think was an oversight for our room only, because we saw other rooms with these signs hanging on the doors), so the maids knocked on our door endlessly during the time period we were trying to nap.

After checking in on Friday afternoon, we showered and went downstairs to partake in happy hour, and then decided to walk around the waterfront before meeting my friend Veronica  for a drink. Veronica was a friend from my MBA program, Thunderbird, where we overlapped for about a year in 2011-2012. She was working at a well-funded startup in the telecommunications space in San Francisco. Before meeting her at the Ferry Building, we walked around The Embarcadero and Pier 7. 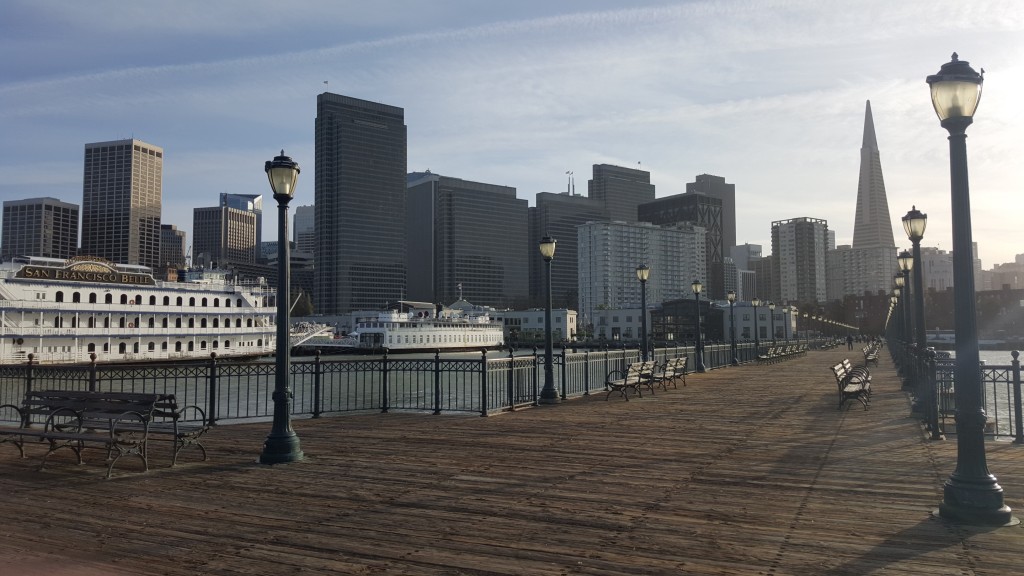 Unfortunately I only had my phone camera, because there were some gorgeous city as well as bay shots with great lighting.

We headed down a few blocks to the Ferry Building Marketplace (it was very much like an upscale hipster version of Faneuil Hall in Boston – an indoor marketplace) and met Veronica for a drink at the wine bar. We caught up over some charcuterie and Cabernet – the perfect combo.

After saying goodbye to Veronica, we decided to walk around SFO China Town and find some Chinese food. We ended up asking a shop keeper for a recommendation, and she told us that R&G Lounge was the place to go. It was on a side street near the SFO China Town Hilton, and was packed with Caucasians as well as Asians (so it looked promising). We gave our name to the hostess, who told us it would be about 30 minutes. We walked around some more to kill time, and stumbled upon some older Chinese women doing Tai Chi and Chinese dance in a courtyard (and pondered that this is why these women lived forever). We watched them for a while and received a moment of peace.

We made it back to R&G and had a drink at the bar while we waited some more. The bartender was awesome – friendly, detail-oriented, flashy (did tricks while he made the drinks), and most importantly made some wicked drinks. Our table was ready shortly and we were bustled towards the back of the bar where a few small tables were located. We glimpsed the rest of the restaurant, a more formal dining room setting, on the other side of the bar, out of public view.

We ordered the Kung Pao chicken and a plate of vegetables. Both were good but not amazing. It was a fun atmosphere, but I would recommend to anyone visiting to try something else. I’ve included a map here of all the restaurants we visited – R&G and the Ferry Building wine bar on night 1, the Boudin sourdough company on the waterfront on day 2 for lunch (not pictured), Caffe Macarroni (hated the name, loved the place) for dinner on day 2, and Yank Sing for dim sum brunch on day 3. Everything was spectacular except for R&G, which again, was good but not great. 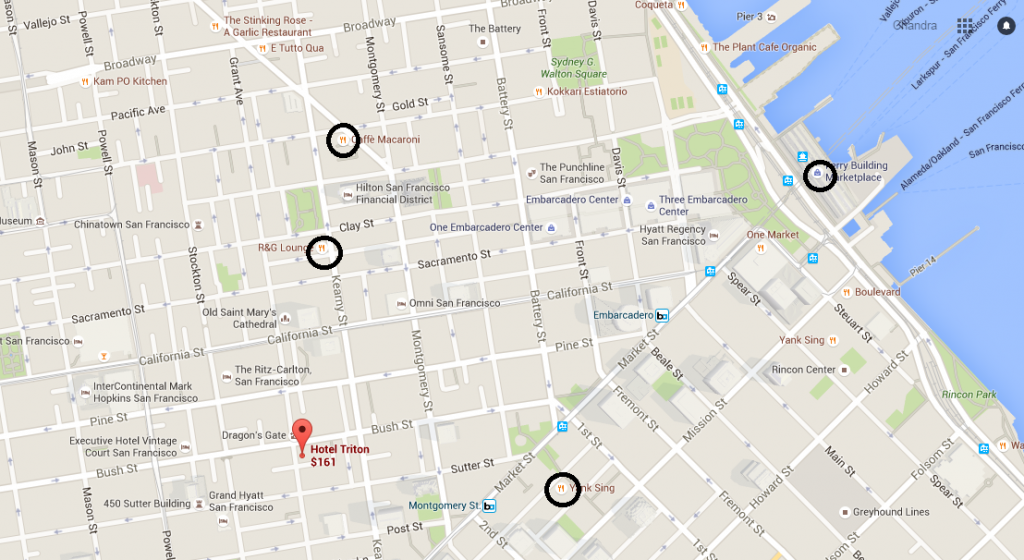 We were exhausted by the end of the night (already having walked about 20,000 steps each) and made it back to The Triton around 1030PM, and were sleeping soundly by 11PM. Our first night of our weekend in SFO China Town was a success.