Our second day (Feb 5 2016) started as we planned our trip from Redstone to Gunnison over some quick bites and coffee from the complimentary Redstone Inn continental breakfast. We had gotten in around 830PM the previous night and stayed up late at the inn chatting with the staff and enjoying the fireplace.

But not before taking a few shots of the Redstone Inn in all its morning winter glory. 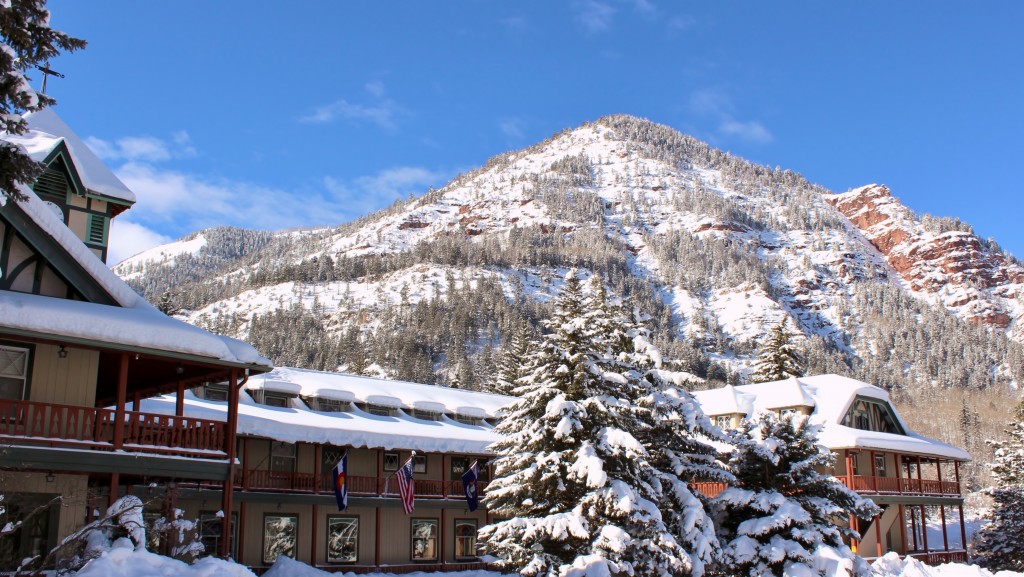 And here’s a shot of the side of the inn, with the mountain in the background. The lighting was brilliant. 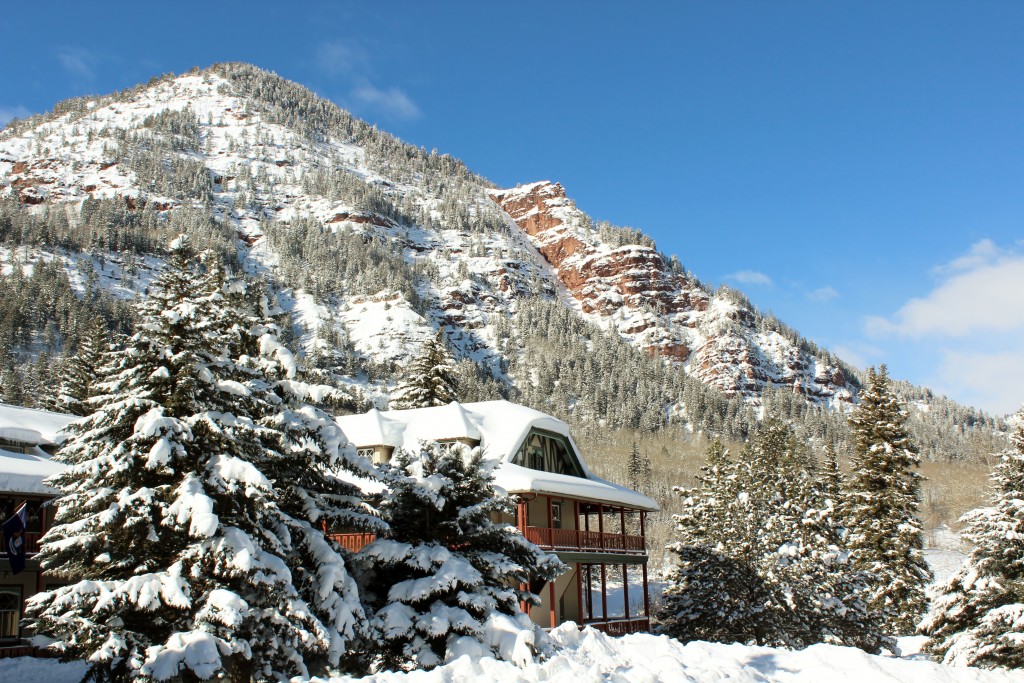 Redstone Inn against the mountain

The views were stark and stunning, and one of the reasons we liked the Redstone area so much was because it was nestled in the tiny valley of mountains on all sides – making it both treacherous and beautiful. The townfolk also mentioned that it was a very “dark” place to live lighting-wise because there were only a few times during the day where the sun didn’t cast a huge shadow. They reckoned that was part of the reason that Carbondale was blowing up, while Redstone still had not.

During our drive, we passed by the town of Marble, CO, known for its famous Marble quarries that were used in the Tomb of the Unknown Solider and the Lincoln Memorial in Washington, D.C. We never did get a chance to stop and check them out. But, we did get a shot of the coking caves right outside the inn (abandoned of course). 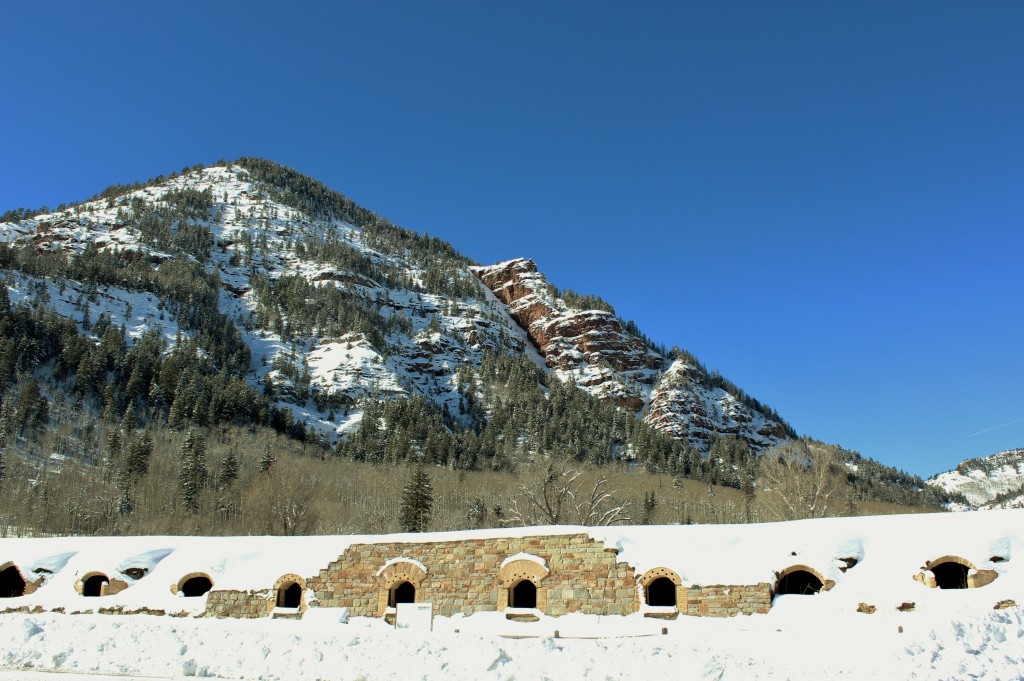 Drive from Redstone to Gunnison

Our route from Redstone to Gunnison took us over McClure Pass, which was still open this Winter. The roads were a little slick, so we weren’t able to make as good time as we would have liked.

through the agricultural Delta County region of Western Colorado, where Paonia was located. It’s essentially a large valley with rich soil, but fairly harsh conditions still in the winter. There are actually some wineries and orchards, bearing peaches, apples, cherries, pears, and plums. The area is also known for livestock, as there is a lot of open space for cattle to roam. Take a look. 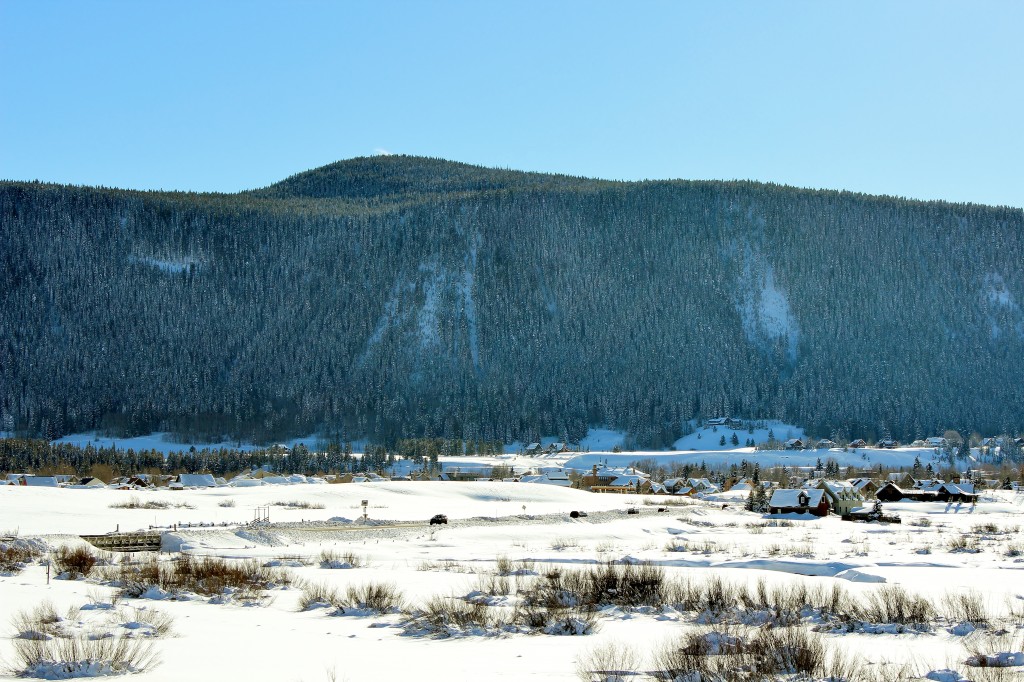 We went through the towns of Hotchkiss and Crawford along the way, mostly for gas stops. Crawford had a large lake, which was saw some folks ice fishing on, as it was completely frozen over.

As we got to the North edge of the Black Canyon, we turned West and continued on 92 to complete our Redstone to Gunnison drive. All in all, with stops and some dawdling, it took about 2.5 hours, reaching Gunnison for brunch at the W Cafe around 130PM.

We enjoyed our food and the company at the cafe (our waitress from the Northeast so Dave got to geek out about the Patriots a little). The town of Gunnison was really charming, and the town is home to Western Colorado State University – it did have a “college” town sort of feel, albeit small. The people were friendly and even the stop to the local sporting goods store for sunglasses led to pleasant small talk with the staff and some of the locals. Dave had been to Gunnison before, but had never done the drive from Redstone to Gunnison, and never in the winter, so it was new for both of us in a way.

Redstone to Gunnison to Crested Butte

From Gunnison, we decided to take a quick look at Crested Butte, since it was only 45 minutes up the road. I had heard so much about it from my friend Jay (of the infamous boat trip) that I just had to see it. Given that it was winter, Kebler Pass was closed – otherwise, we could have made it from Redstone to Gunnison (via Crested Butte) in under 2 hours.

The “detour” to Crested Butte was worth it, although we didn’t capture many good photos because of poor pre-sunset lighting, and also didn’t get any opportunities to fly Dave’s Phantom drone. We did get to drive through the town, which was very cute and upscale. I’m looking forward to returning in the summertime, staying by the river just outside of town, viewing the famed wildflowers, and eating at the French restaurant, which is considered to be the best French restaurant in the state of Colorado (according to my French colleague Laurie, who is known for having great taste). 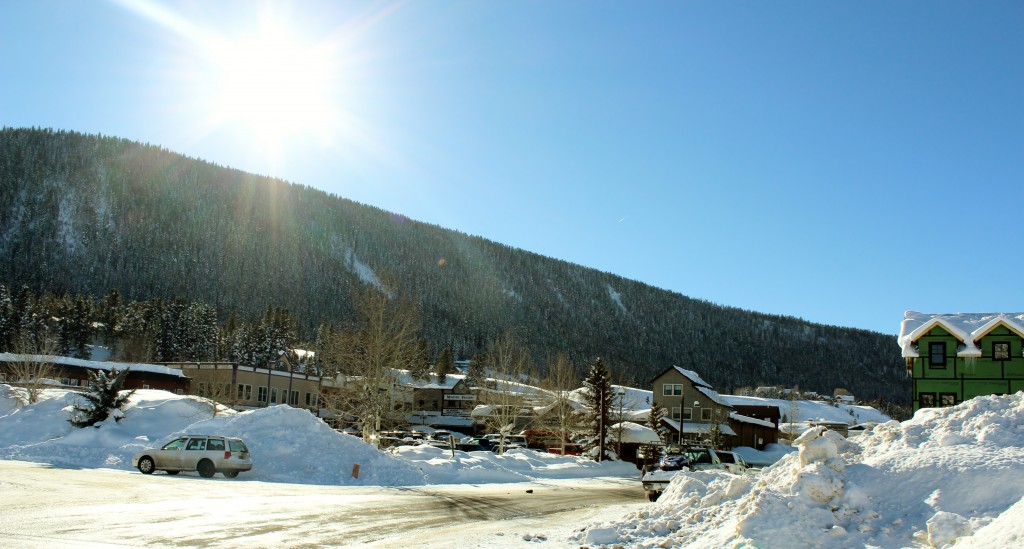 We didn’t stick around Crested Butte, but instead high-tailed it back to the South entrance of the Black Canyon National Park on 50 to catch the last bits of daylight and try to fly the drone over the canyon. 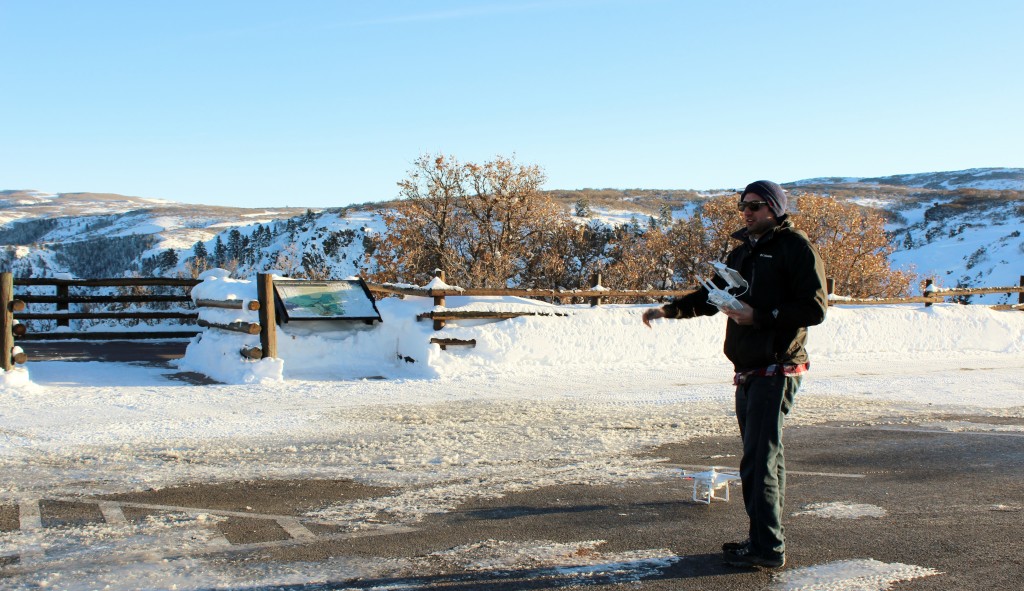 The lighting was poor, the conditions were slick and dark, and Dave was asked to stop flying by the park ranger after only about 5 minutes of being up in the air – a big disappointment. Really no one was even at the park anymore, and we were bothering anyone. These are the best shots I got: 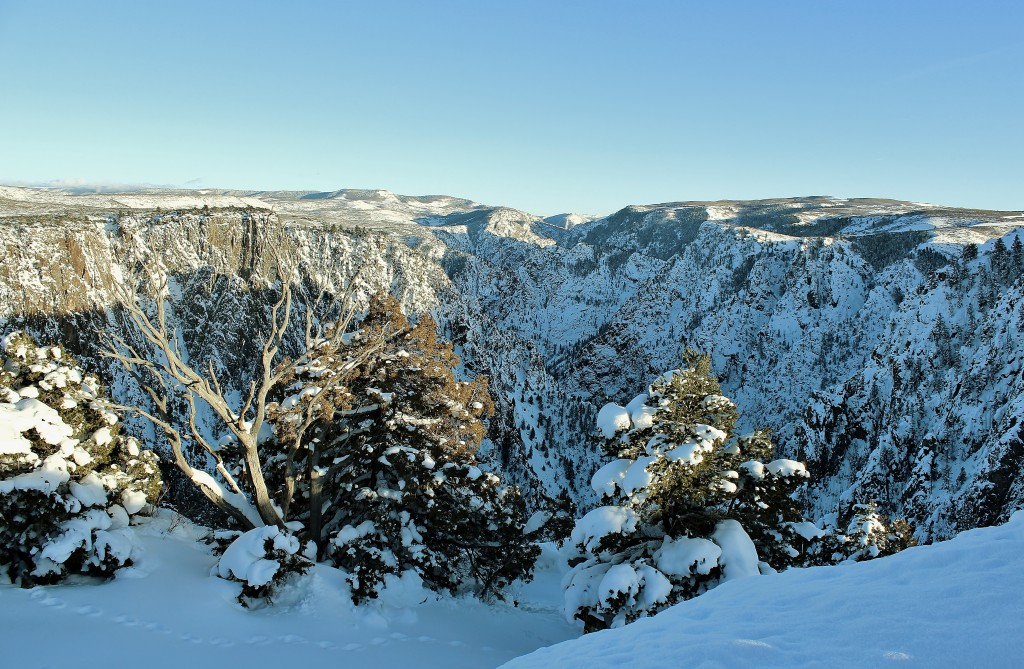 We would just have to come back in the Summer and spend more time scouting out spots with good lighting. The Black Canyon was gorgeous, and the poorly lit shots I took don’t do the scenery justice. Think Grand Canyon-esque.

On our way out of the national park, we were greeted by a huge herd of elk, making up for the lack of good photos of the canyon. 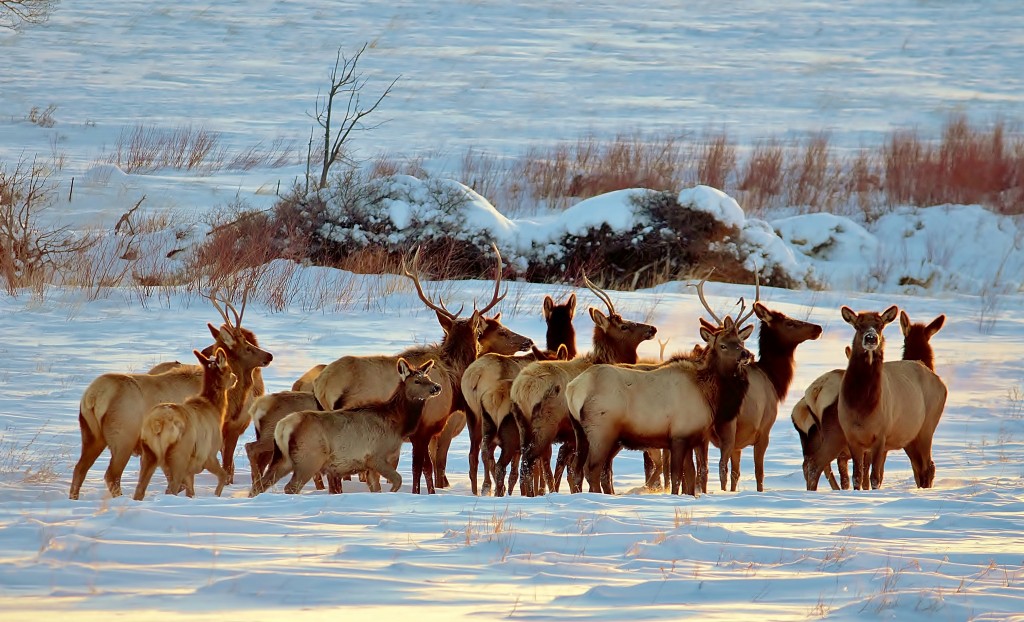 Elk on our Redstone to Gunnison drive

Since it was now dark, and the road had been treacherous on 92 and 133 even during the day, we decided to take 50 to I-70 and stick to the highways for our drive back to Redstone this time around. Even with the longer route, we made it to Carbondale for dinner again (and to check out the First Friday that we heard about the previous night) in under 3 hours.

We decided on a little Italian restaurant in Carbondale called Allegria, and were lucky to find seats at the bar. It seemed that the whole town (and all the tourists) were partaking in the First Friday, and seating was scarce. The bar was great though, and it afforded us ample time to chat with the owner and his family, who were Austrian, and who relocated from Manhattan to have a slower pace of life and raise their kids. The conversation was interesting and the food was delicious as well. I had the eggplant parmesan, which came as a bake, and Dave had a veal gnocchi that was divine. The bread was freshly baked, doughy, and similarly awesome. I accompanied the meal with a Super Tuscan wine – the Torre de Ciardo. We shared the hazelnut shortbread for dessert.

After dinner, we walked around the town a but more, but unfortunately at 10PM the First Friday was over and all the galleries were closed. One of the galleries (which doubled as an art school) had the keys still in the door, with the door unlocked. We called the number on the door, explained that we found the keys, and the owner asked us if we could put the keys gently in the mail-slot (but not push them in all the way), and invited us to stop by in the next day, which we ended up doing on our way out of town.

We ended up back at the other end of the street where we parked at the Marble Distilling Company and did a tasting. It was a hipster upscale vibe, with several drink specials that night related to the Superbowl (e.g. Orange Crush). The place was packed, which surprised us for a small town, and consisted mostly of skiers staying in town from all over the world. Apparently Carbondale is the place to be.

We thought the basic Vodka was pretty good, but we were so tired that we didn’t buy any, and left shortly after the $9 tasting.

Here’s the Marble Distilling Company (during the day): 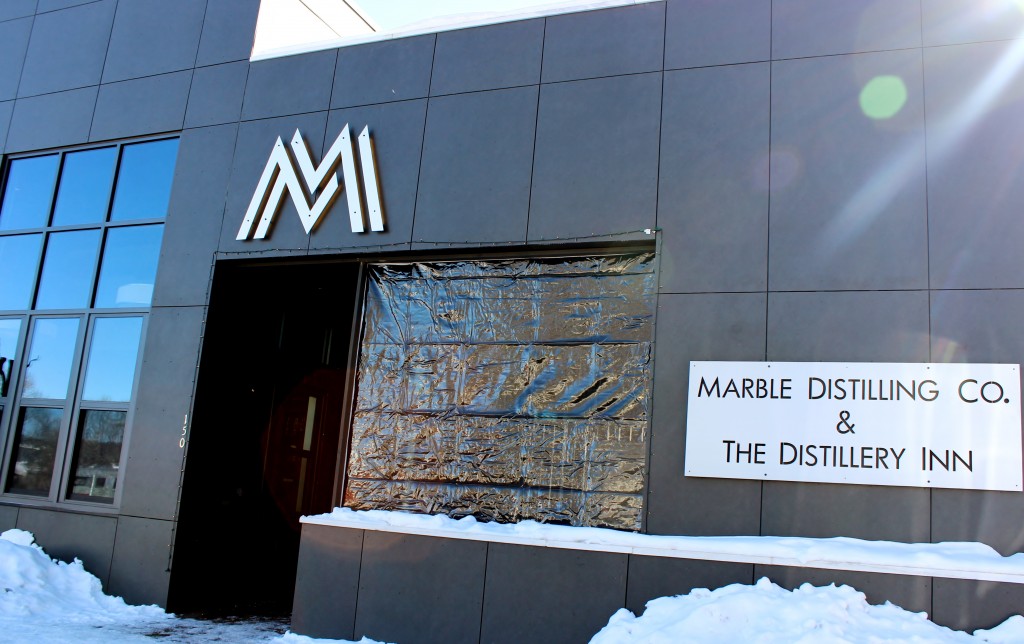 After another fruitful day, we settled back in to the Redstone Inn for a night’s sleep in a room that had never been made up that day (to our annoyance). Considering we were the only people staying at the inn, we never thought that would have been an issue!

One thought on “Redstone to Gunnison”