Our long awaited day spending July 4th and fireworks on Lake Placid was finally upon us, and we certainly made the most of it. We started again at 930AM with a hearty breakfast – an oatmeal berry bake that was piping hot and delicious. Our chat with Amy yielded even more gems of wisdom – a pro parking tip for where to park for free at Lake Placid – and advice around going to Whiteface Mountain first. She alleviated our concerns around not being able to find parking at Lake Placid if we didn’t arrive in the morning, reminding us that it was a small town after all, and most locals didn’t arrive until 5PM or even later. Here was our route for the day: 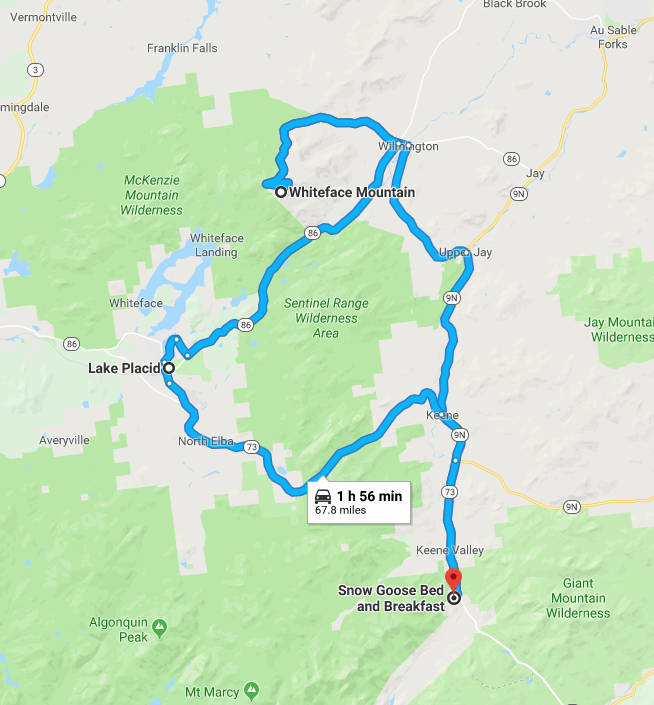 We set out for Whiteface Mountain around 1030AM on Veteran’s Memorial Highway. Normally it would take around 30 minutes, but we made a wrong turn that set us back by around 15 minutes – the signage pointing us to the “castle” portion of Whiteface and not the ski area was not good. The castle at the top of Whiteface consisted of a pedestrian only hike up to the top, as well as a cafe, museum, and gift-shop. From this vantage point, we would be able to see 40 miles on every side in to several states and even in to Canada.

The weather was in our favor, other than some slight haze from the heat once we reached the summit. After paying the entry fee ($12 for the vehicle and driver + $8 for each additional adult), we continued up the mountain, stopping at a few scenic overlooks. At the top, we were able to find parking a little bit away from the visitor’s center castle, and continued our climb to the peak from there. It was about 400 steps of rocky and slippery terrain up the cliff, with handrails that helped you from falling. 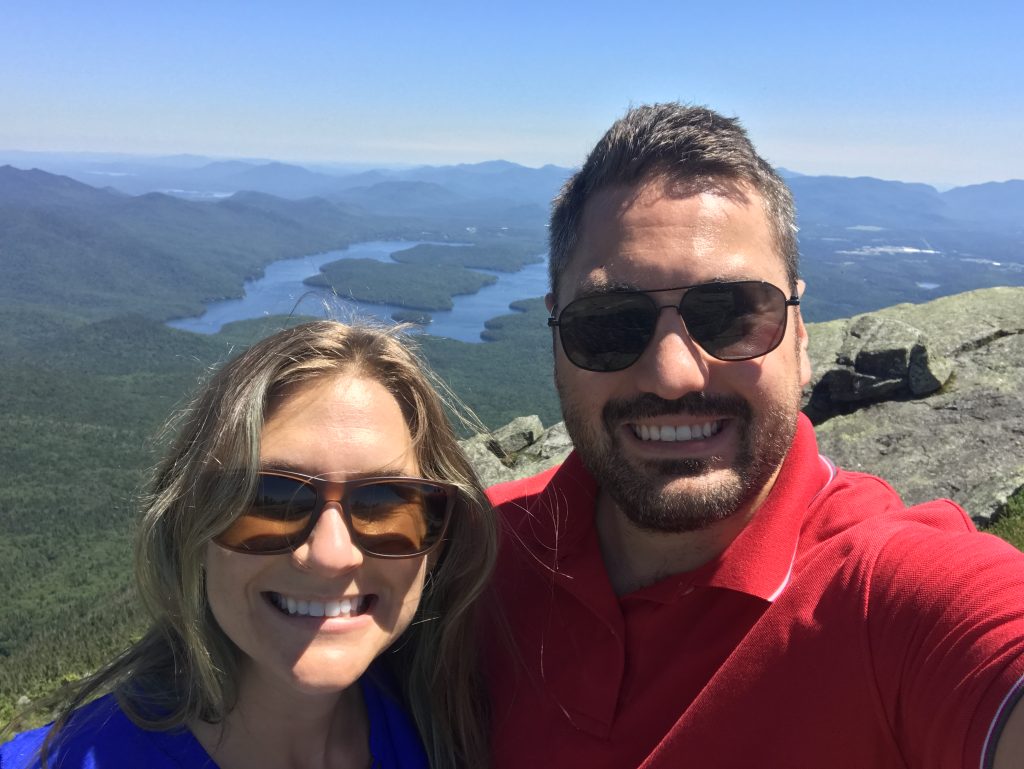 The views were worth the fee alone, and the cool weather was an added bonus. It was in the 70s at 4,610 feet. Nothing like our Rockies in terms of elevation, but the rise was just as dramatic. 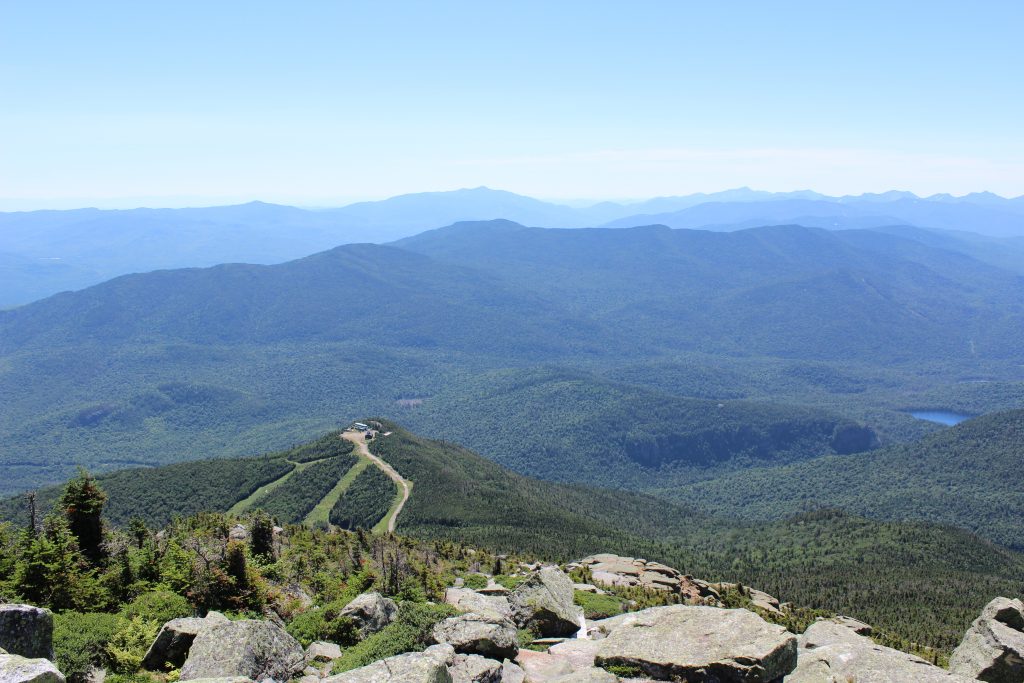 We were able to get panoramic views of Lake Champlain and Canada beyond. 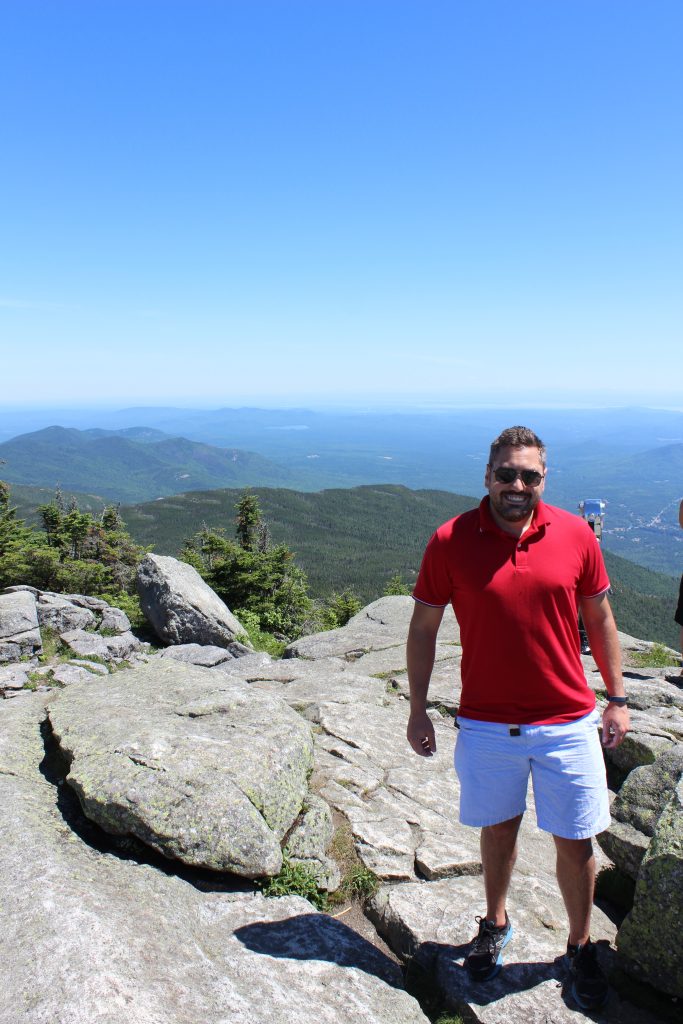 After about 30 minutes enjoying the view and cool air, we went back down the mountain and continued our drive to Lake Placid. It took another 30 minutes to arrive and stake our claim to a free parking spot behind the Crown Plaza Hotel, just as Amy had advised. There were tons of spots, and we were feeling a little silly about wanting to get their super early to get a parking spot. Even so, it was 1PM, and now we had the entire day to enjoy Lake Placid.

We started by going in to the Olympic complex where the 1932 and 1980 Olympics were held and the Herb Brooks arena where the 1980 “Miracle on Ice” (American defeat of the Russians) occurred.

Inside, we enjoyed watching some young female figure skaters practice at an intermediate level. It was also nice and cool! Brendan was in heaven. 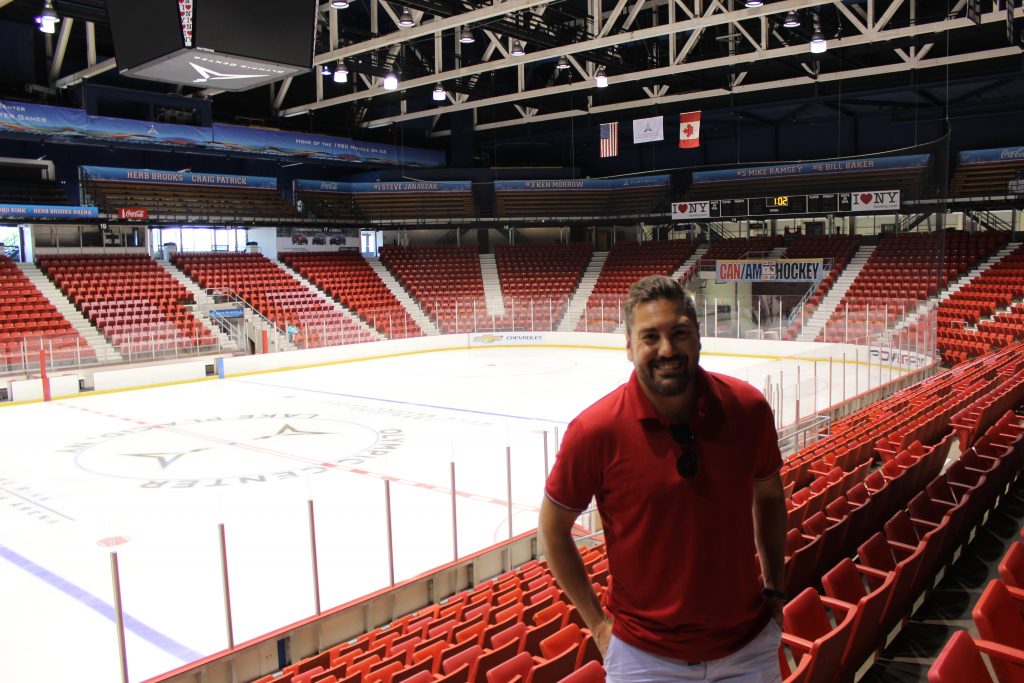 We each had our fun taking the perfunctory tourist shot as well. 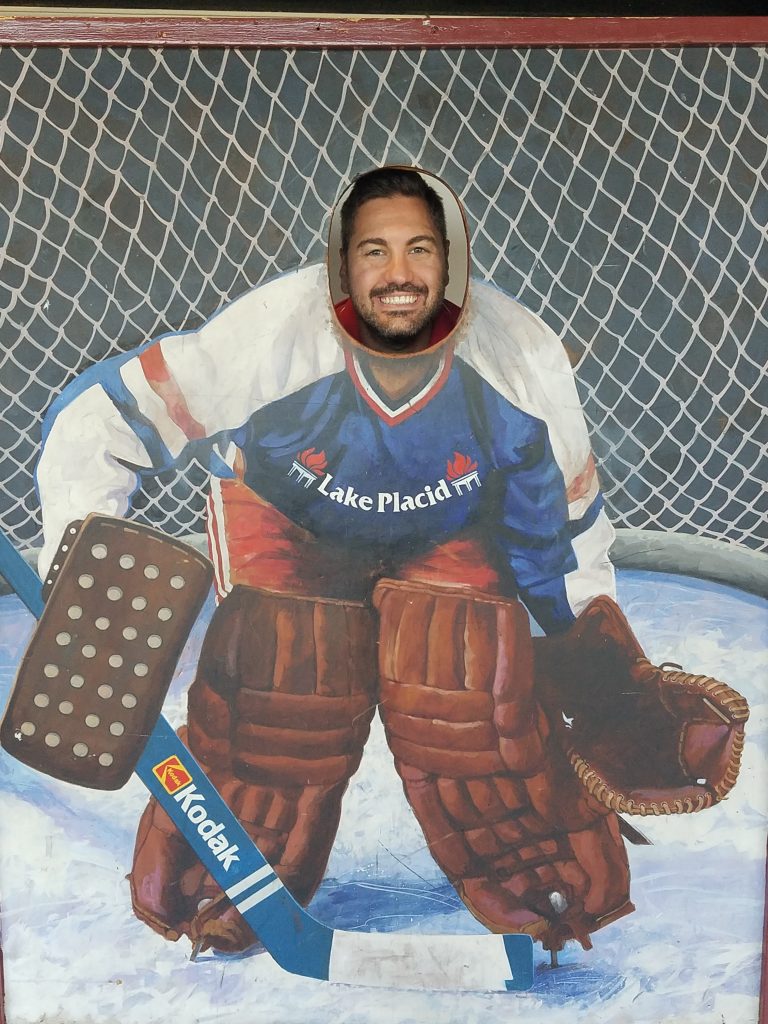 After the Olympics complex, we went to the town of Lake Placid just around the corner and spent the rest of the day taking in shops, the view, eating, and drinking. Our first stop was to make a reservation at the Top of the Lake for a 9PM seating where we thought we could view the fireworks. It wasn’t open yet, but Sonny, the owner of the Players Bar & Grill (the restaurant at the bottom of the building where Top of the Lake was in) let us in and upstairs to see if we could find someone. We were able to make a reservation no problem. We also decided to come back to the Players Bar & Grill later because the owner was so nice.

Next up was the Christmas Store (where we bought a little Adirondack chair ornament) and the Saratoga Olive Oil Company. We spent the next hour sampling various types of olive oils and vinegars, mixing and matching over 30 of each to make our perfect combinations. We went a little crazy here and ended up purchasing a 6 pack. One of our favorite combos was chipotle olive oil with pineapple white balsamic vinegar. We really enjoyed this store! 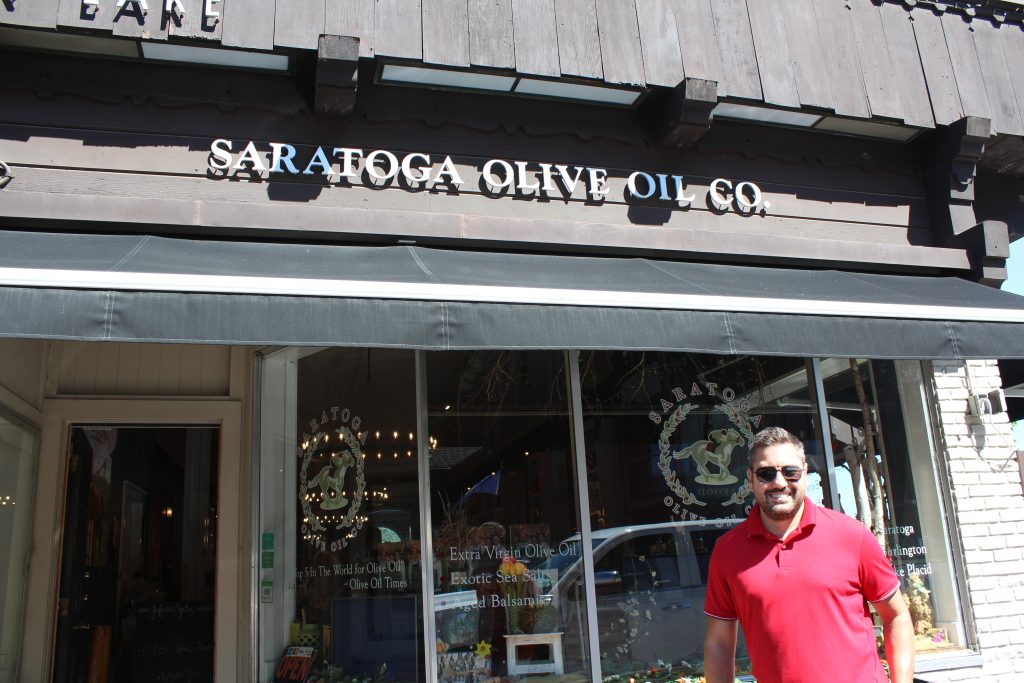 Afterwards, we had an appetite, to we bought a hot dog from a guy grilling them on the pedestrian walkway near the main square. It did the trick hunger-wise but it was not very good – he didn’t even put it on the grill, he just boiled it in a little side tray! I was disappointed. And what’s the way to smother disappointment? Beer. After a quick stop back to the main square and grabbed a slice of watermelon and a free shirt commemorating the 2018 4th of July celebration, we headed back to see our Russian friend Sonny. 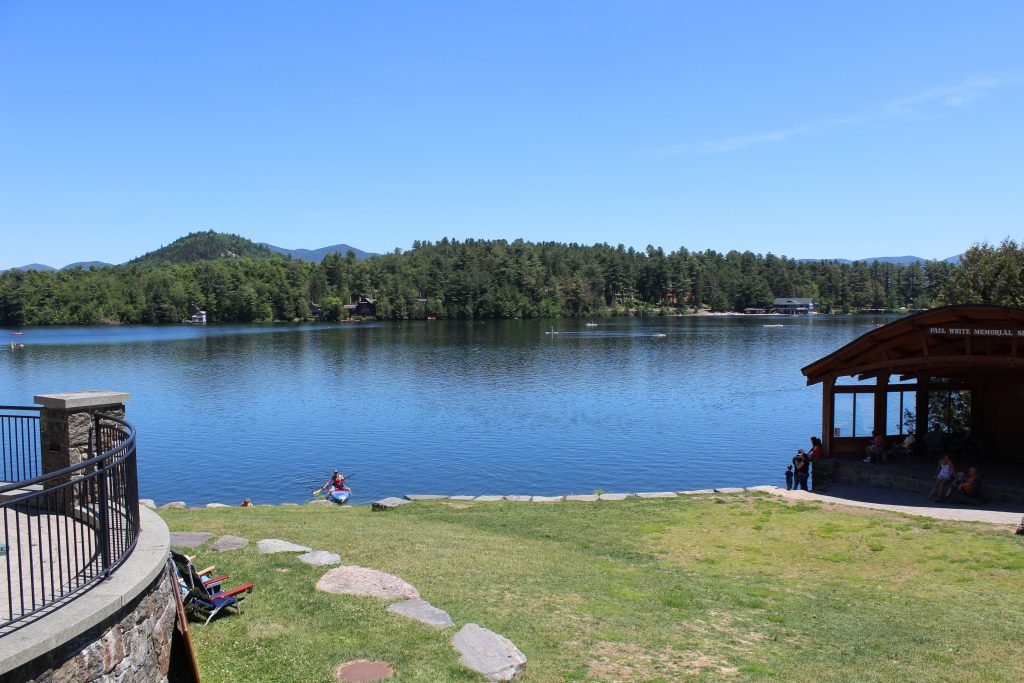 Mirror Lake from the main square

At the Players Bar & Grill, I had a blueberry blonde beer and Brendan tried a local IPA that he actually liked. Sonny ended up comping our drinks. He was apparently a huge Broncos fan as we learned after we got to talking, and he was just a really nice guy!

Next up (we still had many hours to kill), we decided to go kayaking. We tried the place around the corner from the Players Bar & Grill, but they were cash only, so we walked back to the middle of the Lake Placid strip to Eastern Mountain Sports, who were also renting. We were able to procure the very last (and broken) tandem kayak of the day, and by 3PM we were out on the Mirror Lake. 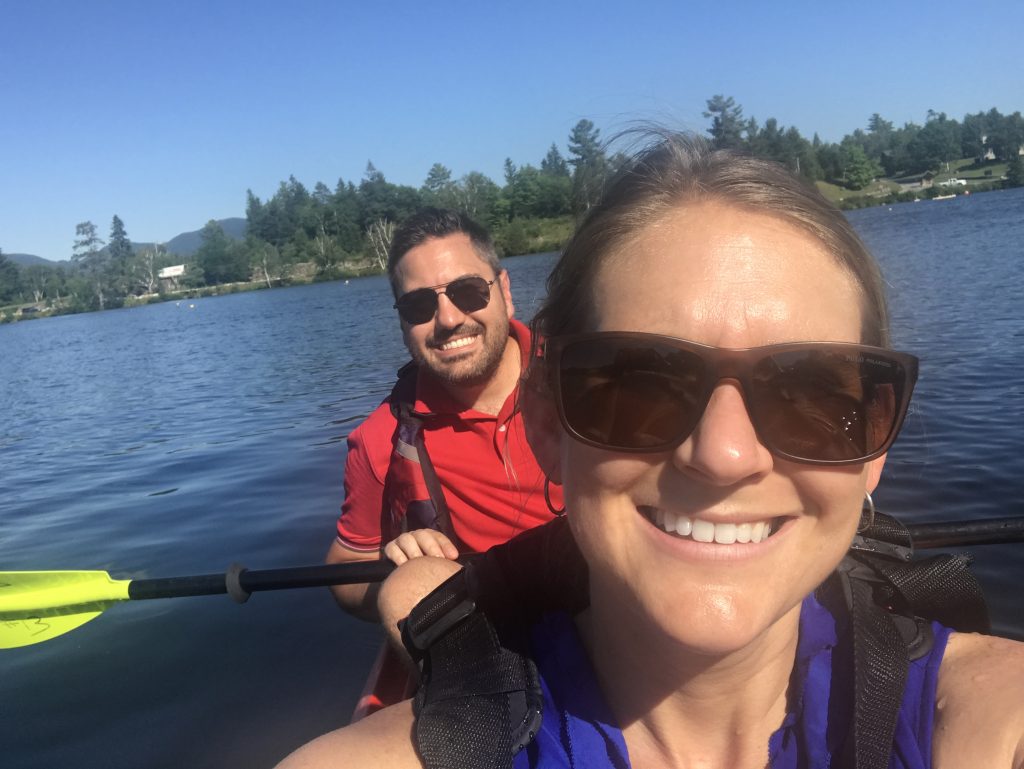 We circled the entire lake and enjoyed the people watching and the nature watching. 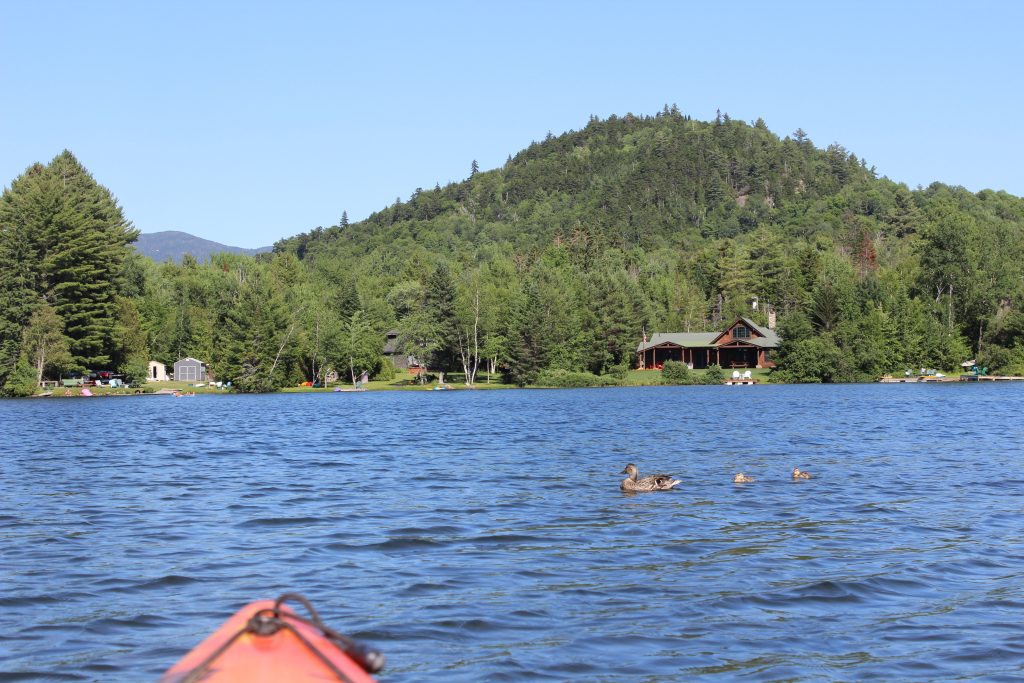 The houses on the lake were gorgeous and were worth the effort alone. We also got to see a duck family, and also this hilarious dog on a sup with his owner. This picture is particularly bizarre to me because it looks like her legs are inverted due to the shadows! 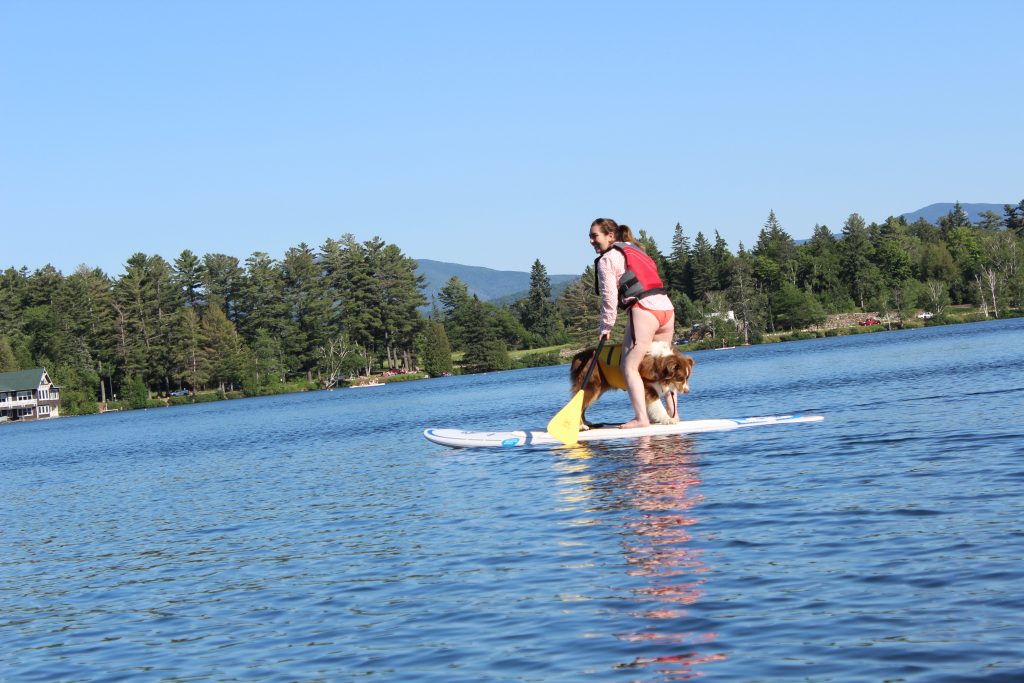 We spent about 2 hours out there and even got to watch the Lake Placid parade at 5PM from the lake. The highlight of the parade was the announcer announcing “Kids on bikes” multiple times. It was reminiscent of our recent trip to Jamaica where “market time” was a thing (blog here). Here’s to small towns. 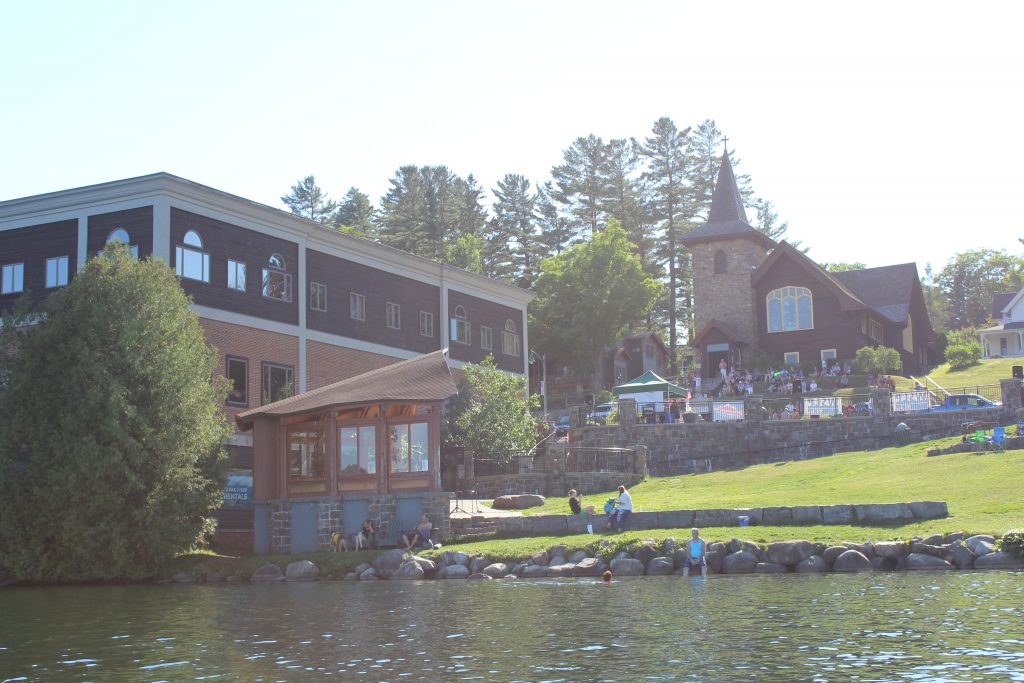 We decided to call it a day (for kayaking anyways) around 530PM. After turning in the kayaks, we went back to see Sonny. This time, his wife was manning the bar, and she made the best Moscow Mule I have ever had with muddled blueberries and mint. Through talking with her, we learned that they owned the restaurant (but rented the space from the Top of the Lake), and that she absolutely hated making the coconut drink on the menu because it was so elaborate. This of course was the drink Brendan had originally ordered, so he felt bad. But it was delicious! We ended up ordering mules after that because they were so good. 2 out of 4 places we had visited so far had good mules.

We had a good buzz on and decided it was time for dinner. Back to the main square we went to try to take in the concert on the lawn. We we able to snag a seat on the patio of the Italian restaurant we had been eyeing earlier and had a great view of the half shell where a local orchestra was playing. We couldn’t have gotten better seats. 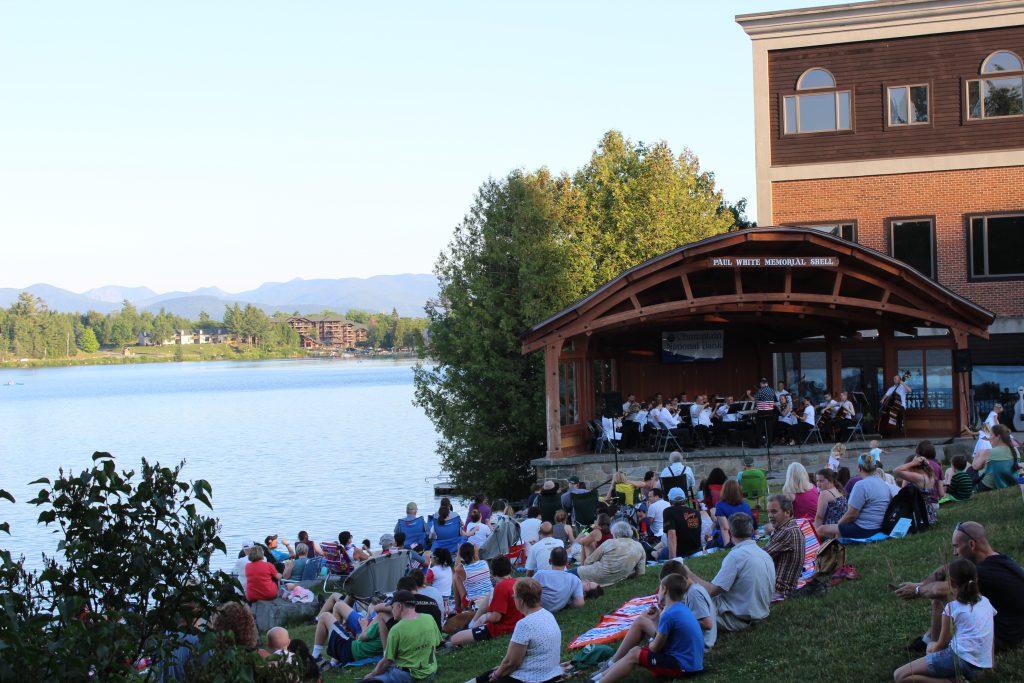 We shared a large vegetarian pizza and enjoyed listening to traditional 4th of July patriotic classical music from composers like Gershwin, Cole Porter, and John Williams. We finished with about an hour to spare before the fireworks and were so stuffed that we decided to cancel out reservation at the Top of the Lake and take our chances on the green. It did not look very crowded.

This turned out to be a wise decision. As 930PM approached, we decided to move to a different location closer to where we had originally parked. Closer to the Olympic complex, on the grass leading up to the Crown Plaza, we found most of the locals already camped out for fireworks. This was apparently the better place to sit, and since it gave us a faster exit, we went for it.

We were not disappointed. Around 940PM the fireworks began and we had a perfect view. Had we kept our reservation at Top of the Lake, it would have been unlikely to see them due to obstruction from buildings and trees. Here, we had a great vantage point on a hill. The only better place to see them would have been the lake itself. It kind of reminded me of fireworks at Disneyland because we had a princess tower right in front of us that the fireworks appeared to be coming out of.

The only thing we didn’t like about the fireworks was the music being played. The local station, 93.3, decided to play mostly modern music as an accompaniment, and not the traditional patriotic music we were used to. We were even happier that we got to take in the free concert earlier to get our American fix.

The show went on for about 20 minutes leading up to a nice finale. We high-tailed it immediately to our car, were one of the first on the road, and luckily only had to sit in traffic for around 20 minutes getting out of Lake Placid. We made it back to our hotel by 11PM after an exhausting day and promptly hit the hay to recharge for our final day.

One thought on “Lake Placid”