On Tuesday, our second full day in upstate New York, and only a day before July 4th, we decided to do something completely different – rail biking the Adirondacks. But first, we started the day (at 930AM this time) with another hearty breakfast at the Snow Goose B&B. Amy made us an egg scramble, accompanied with yogurts, fruit, and toast again. Just the protein we needed to “kind of” exercise while rail biking the Adirondacks. 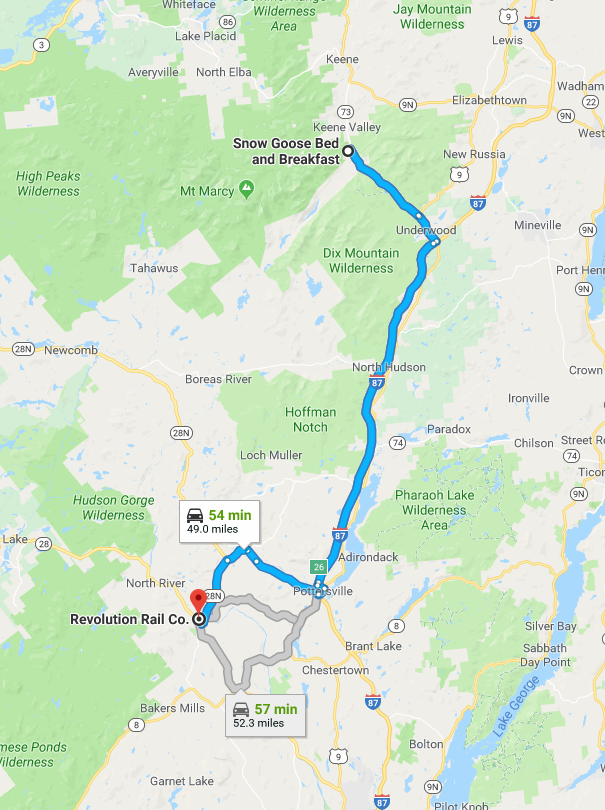 Rail biking the Adirondacks – our drive

We then set out for the North Creek rail station nearby Lake George, where the company Revolution Rail operated out of. We had set up a 1230PM appointment a few months in advance since rail biking the Adirondacks looked like an incredibly unique thing to do. THe company was organized and prompt, greeting us and checking us in immediately at noon (they asked us to arrive 30 minutes in advance or our appointment). As we were waiting around the trail depot, we learned that this was train station Teddy Roosevelt was at when he found out when McKinley was shot (which would make him President). 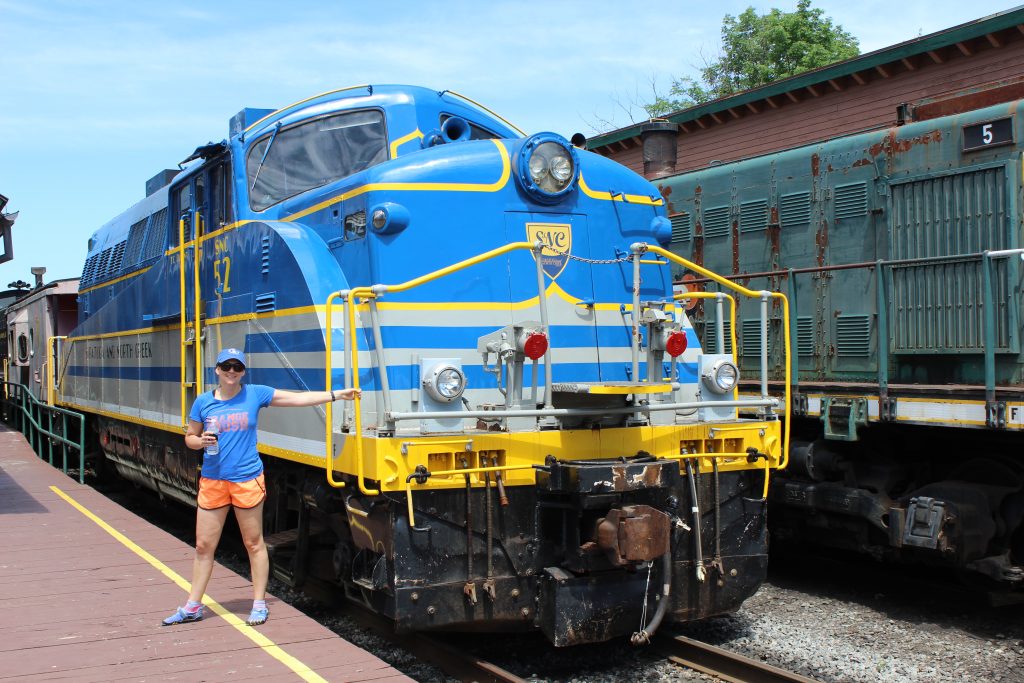 Revolution Rail gathered us and about 30 other people onto a bus at 1230PM and moved us 5 miles or so up the road to a 3 mile portion of the track that they leased from the rail company. We disembarked the bus and waited to be set up. If you’re wondering what we are even talking about, take a look at the rail bikes here! 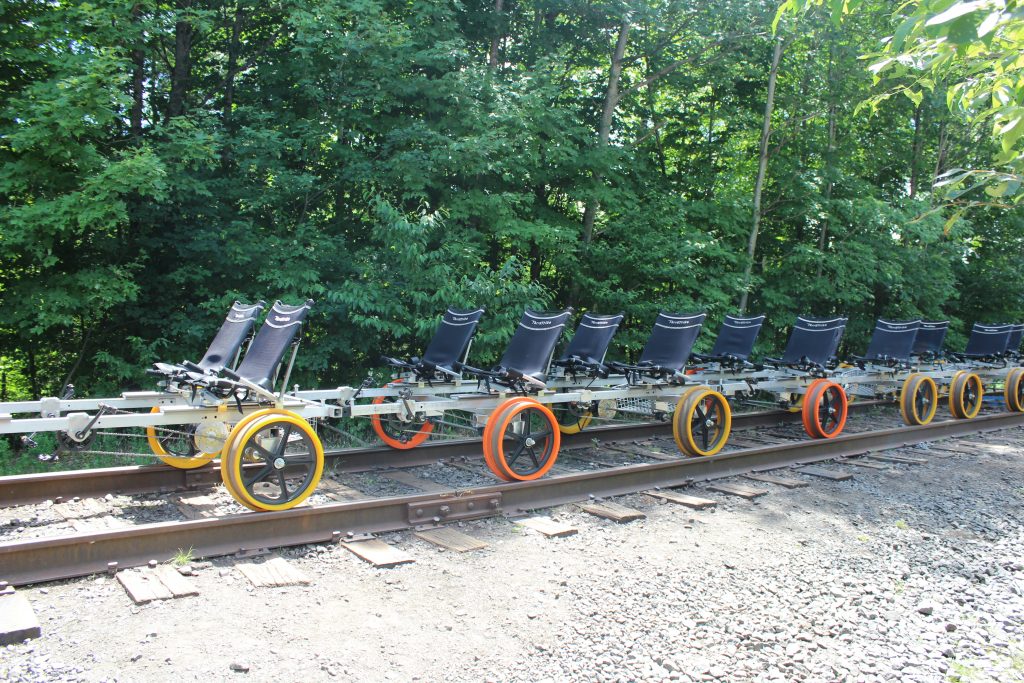 There was a very large (20 person) family that was set up together in the back, and we were situation in position #3 behind another couple and our train conductor. BY 1PM we were peddling away, rail biking the Adirondacks.

It was a leisurely 3 mile bike where we got to take in some nice forest scenery against the Hudson, and even passed over the Hudson at one point. 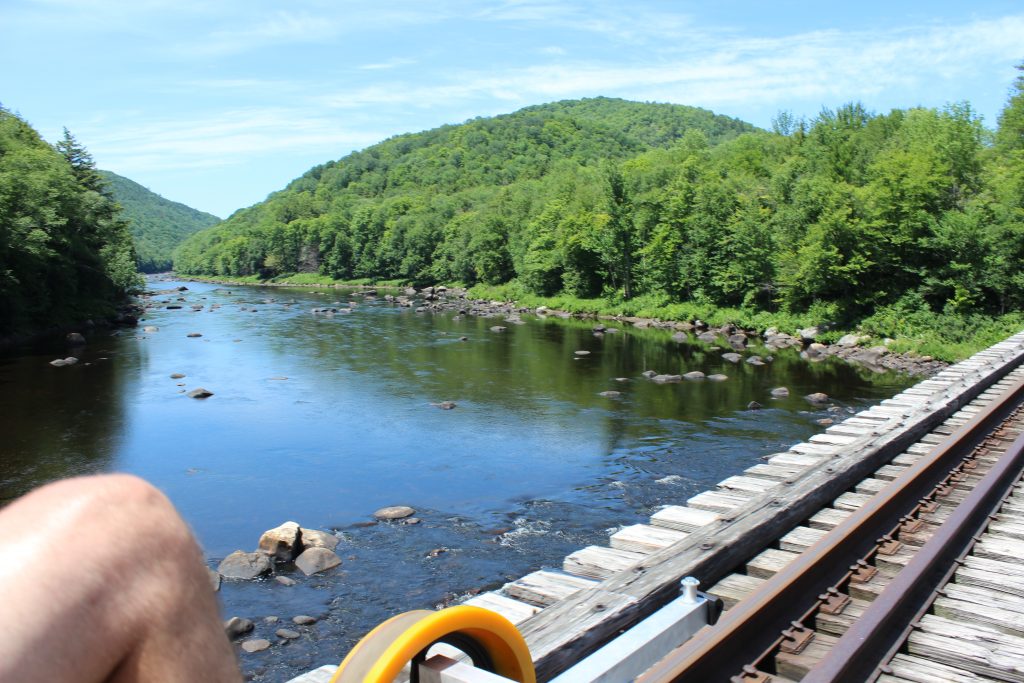 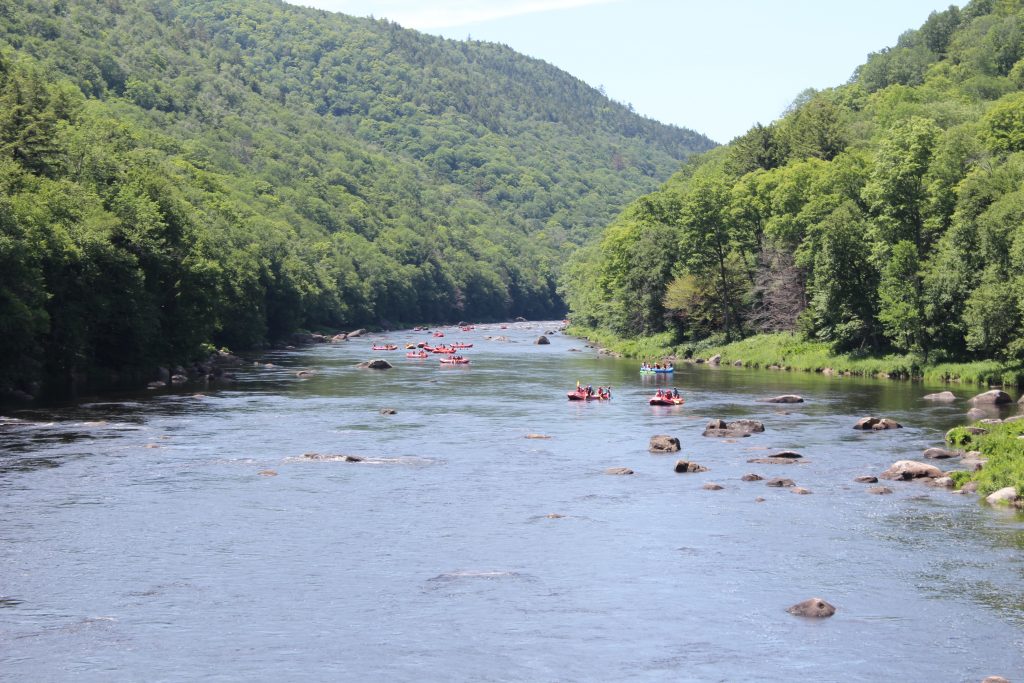 After the first 3 miles, we stopped for 30 minutes while the engineers rotated the bikes around the other way for our return journey. Picnic benches were set up for us on the Hudson where we relaxed before our final leg. The only thing that could have made rail biking the Adirondacks even better would have beer – apparently it wasn’t totally legal yet to drink while operating these things! 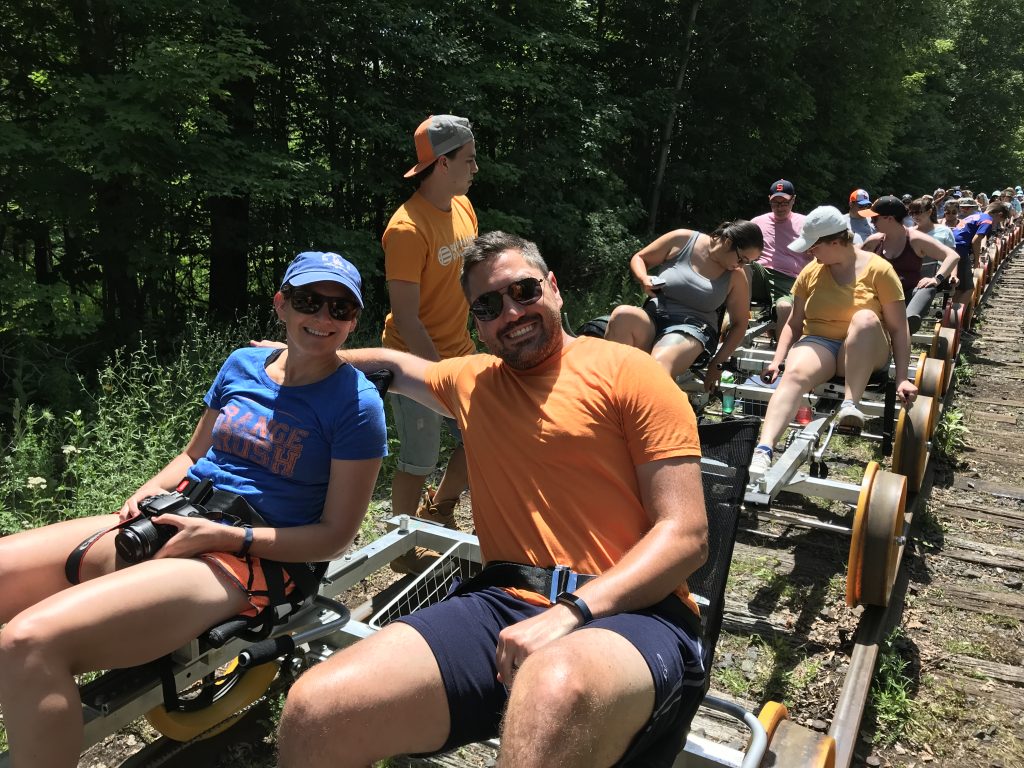 Once back in the rail bikes, we set up for another 3 miles, this time mostly downhill. It really only was “kinda” exercise – we barely had to pedal at all – these things just went! We could have done this all day, it was so relaxing, great scenery, and not too taxing.

All in all we loved it, and wanted more. Definitely a unique way to spend a few hours.

We pulled back in to the pickup point, transferred back to the bus, and were back at the North Creek rail station by 3PM. We decided to head in to the nearby town of North Creek for a sandwich to take with us on the road, and found a very cute little market called Izzy’s with a great selection of lunch fare.

We ate in the car and made it back to the Snow Goose around 430PM. We decided to save Whiteface Mountain for another day since we thought it closed at 445PM, and it would have taken 30 minutes or so to reach (it actually closed at 530PM in the summer, we later learned). We decided to just shower and chill in the room until an 8PM dinner reservation that we made at the nearby AuSable Inn just a mile up the road in Keene. This was definitely our lazy day. I spent some time blogging as well and catching up on email. Note: this part of the country is only serviced by Verizon, so if you have AT&T you will NOT get cell service unless you are on the major highways, and even that is spotty.

Keene Valley Ausable Inn was packed, and we were glad we had a reservation. We were seated at the perfect low-top table in the bar section and enjoyed the best Moscow Mules we’d had so far. This one was made like a Bloody Mary – it had a bunch of fixins like basil, lemon, lime, and ginger. 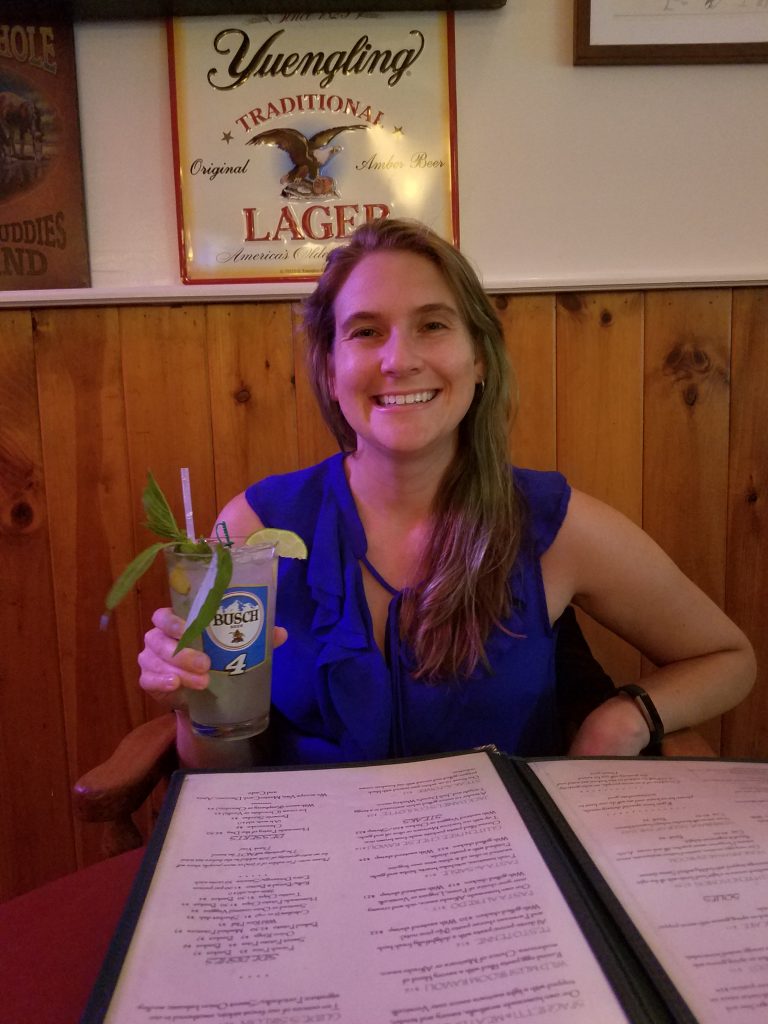 The food was great, even though the service was a little slow. We believe our waitress was the owner’s daughter – she knew her stuff and you could tell she was proud of the place and the food. She recommended the Hungarian mushroom soup and the French Onion, so we got one of each and were not disappointed. It might have been the best French onion soup I’d ever had.

For dinner, we both got different pasta dishes, mine with white wine sauce and Brendan’s with pesto sauce. Both were winners.

We were almost too stuffed for dessert, but that has never stopped us before. We had been craving pie from the Noonmark Diner across the street but it closed at 8PM so we missed our window. Good news – AuSable Inn had fabulous pie selections (probably from Noonmark) so I got a blueberry slice and Brendan got a piece of (surprise!) strawberry rhubarb.

We had contemplated walking, but the road was so dark, and cars came at 45 miles per hour that ultimately we didn’t want to risk it – but it would have been possible. We were home and in bed by 11PM.