We left Lake George and Fort William Henry for our final day before we took our 6PM flight out of the Albany International Airport. But first, our final breakfast at the Snow Goose B&B. Amy and Wayne served us a miniature pecan French toast with fresh syrup – we absolutely need to get the recipe for this one! After breakfast we said goodbye and were on our way around 11AM.

We had a couple of choices for today – a bobsled experience at the Olympic Training Center on the way to Lake Placid; or Lake George. The bobsled was pretty expensive, and we literally had come all this way to see Lake George (that was our initial plan for the region) and Fort William Henry, so we opted for the latter.

It was about an hour drive to Lake George itself, so we reached by noon. Our initial impression driving through the town was that it was a tourist trap, a little Atlantic City. Ignoring that for now, our first stop was to check out Fort William Henry, from “Last of the Mohicans” by James Fenimore Cooper. This is where the massacre of 200 surrendered British took place in 1757 by the Huron Indians (and many others), who sided with the French. It was actually fun to re-watch Daniel Day Lewis in “Last of the Mohicans” when we returned home and apply our memories. 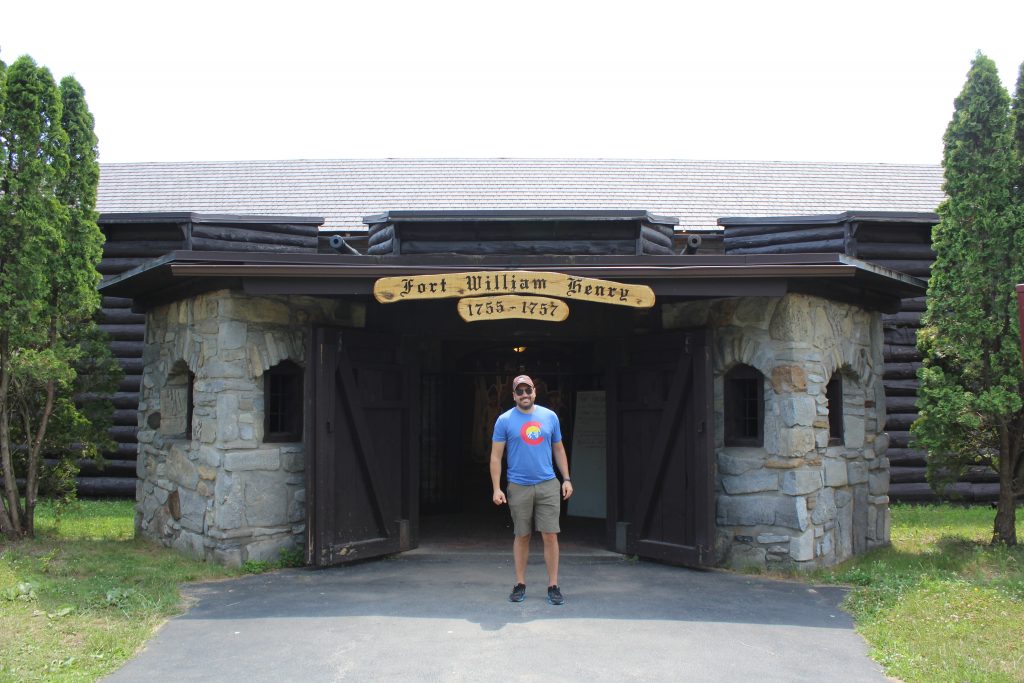 We went inside to see the offerings, and it was fairly identical to what we already experienced at Fort Ticonderoga. At a $17 price-tag, we opted instead to just walk around Lake George. We immediately came across this gorgeous wood carving on fur trappers in a canoe (that’s the Fort in the background, upper right). 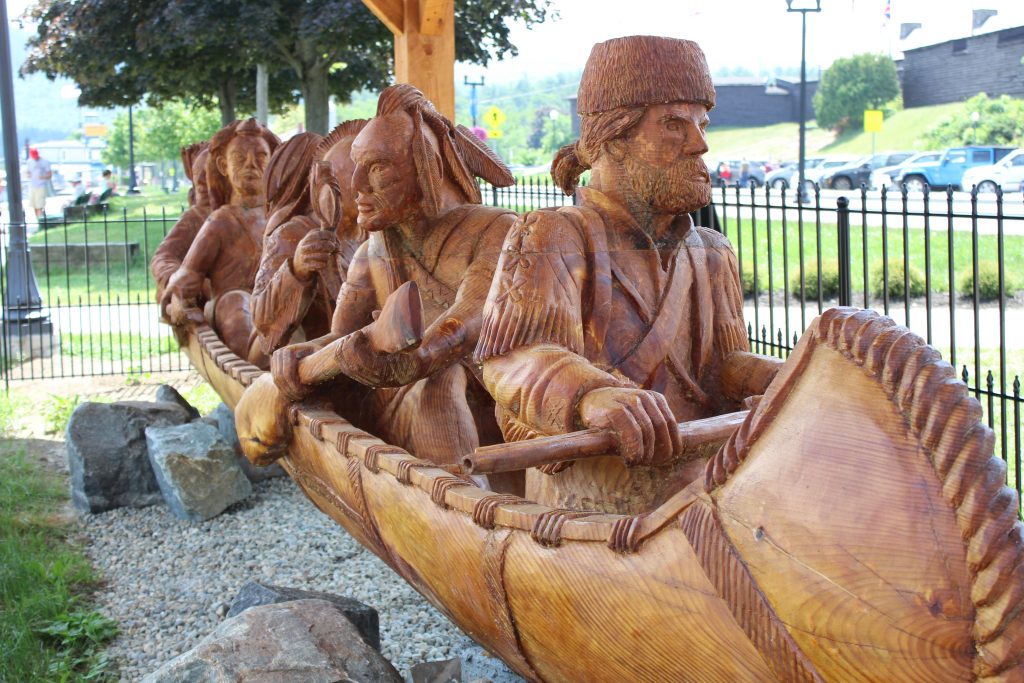 It was a really, really hot day and hard to be outside. And finally, Lake George itself. We really wished we were on the water, but didn’t have time for anything too extravagant.

Lake George with a steamboat

We continued our walk to the end of the pedestrian path along the lake, getting some nice views of a parasailer. 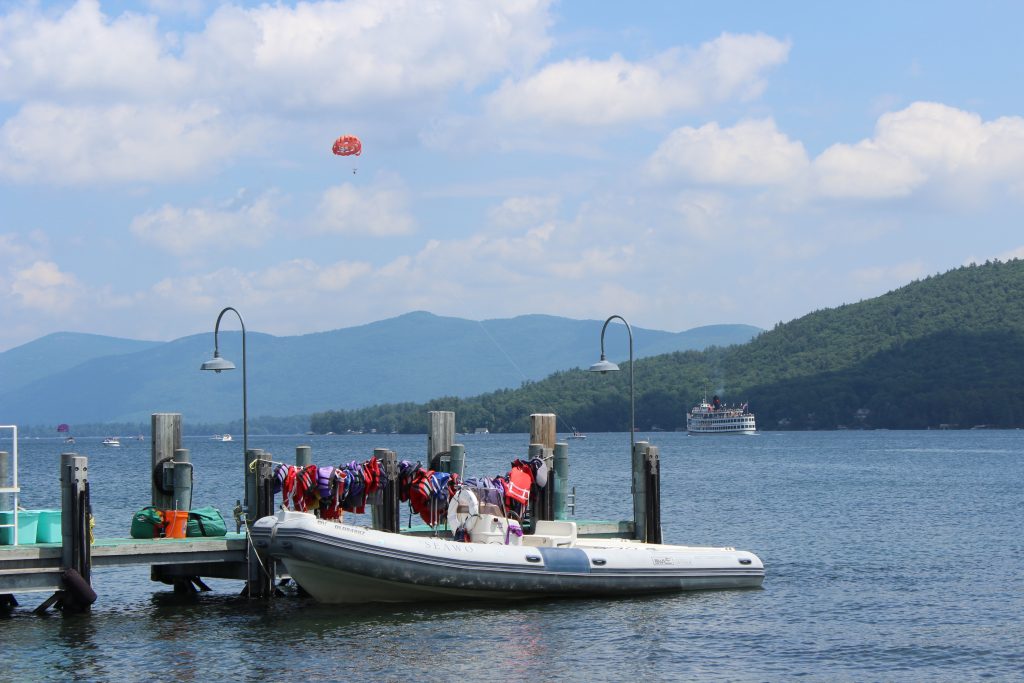 At the pedestrian dead-end, we turned in to the town, crossed the street, and enjoyed the air conditioning at the Adirondack Winery. It was right next to another olive oil store! We didn’t have the appetite at this point for wine tasting, but they had side nicely described wines and it looked like a fun experience. We decided we had had enough, and ambled back to our vehicle (pro tip: if you park behind Fort William Henry in the museum parking lot, it’s free!). 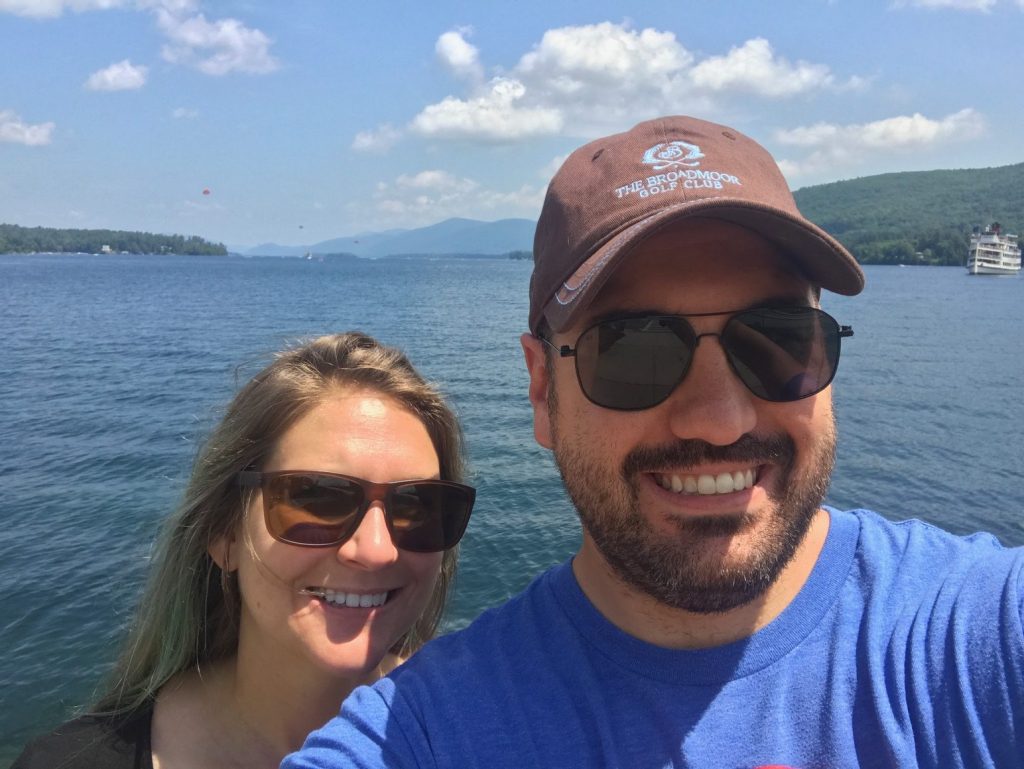 Lake George was beautiful, but only the lake was worth seeing – the town itself and the kitschy things to do on Lake George were all pretty trashy!

Since we were still a little full from breakfast, we decided to continue on to Albany, our final destination, and grab lunch in the city. On our way, we encountered a torrential thunderstorm (no exaggeration), making driving on the highway very hard. Brendan was a trooper.

About an hour later we were in Albany, and first headed to the “Mansion District” and the old Schuyler Mansion (of the Schuyler sisters in Hamilton, which we had seen a few months ago). We drove around a bit more to see the purported old mansions from the 18th century, but found none. This area had apparently become more of a slum in present day. Strike two for the day.

We did some Googling and decided to have lunch at a place called The Hollow right in downtown, in the historic state capital area. On our way we drove past the performing arts complex (The Egg) and a few other cool buildings, but mostly this city looked like a depressed industrial area remnant. It was a ghost town on this Thursday after 4th of July in town, and in the restaurant. But, the food was surprisingly hipster and good. I got a brie and fig pressed panini with sweet potato fries and Brendan got a pesto chicken sandwich. The rain had finally let up as we were eating. Afterwards, we decided that there wasn’t much more to see in the area by foot, and that we would just go to the airport a bit early. Our flight was at 6PM and it was probably around 3PM when we started over. Albany was a disappointed as well.

We turned in our rental car back to Hertz after getting gas, and starting looking at a board full of flight delays due to weather. Ours was still on time, and it was the last flight out of the day (we were flying first to ORD, laying over for 2 hours, then flying on to Denver). We checked out bag and asked the agent if we could get on an earlier flight to ORD  (we noticed there was one leaving at 330PM that we might still be able to make). He said it was too tight, and didn’t want to push it, so we stuck with our original plan.

Security was a breeze with Pre-Check, and we made it to our gate just as this other flight was boarding. We sat down for a few minutes and then the gate agent made an announcement that anyone headed to ORD on the later flight was welcome to board this one. Knowing that there was a good chance of our flight getting delayed to the point of missing our connection in ORD, we decided to get in, even without our bags. The agent was amazing, and even upgraded us to first class on our award miles ticket (highly unusual!). My status was finally paying off.

We really enjoyed our first class flight, except for Brendan spilling my G&T 🙂

In Chicago, we played the game of trying to fly standby on the first flight to Denver (a few hours earlier than our 9PM flight) to get ahead of the impending storm. As soon as we landed I called United and the agent was able to get us on the 730PM flight, but the 6PM flight was full. So we headed to the gate for the 6PM flight and put our names on the wait-list. We ended up getting on at the last minute, again largely due to my status.

Despite sitting on the runway for 45 minutes to get out of ORD due to congestion, all in all we arrived at DEN around 730PM. The only downside was that we did not have our bag (it appeared it would come in the following day, as would we have if we had not pushed our way onto the other flights). At the baggage claim help desk, we arranged for the bag to be delivered to our house, which was our best case scenario. Sure enough, the following day, it was.

Essentially we returned 3 hours earlier than we normally would have, got to have Chinese take-out that night at Peter’s, and got our luggage delivered the next day to our doorstep. All of my travel experience paid off as we executed this one flawlessly. Brendan even gave me the credit on this baller move (happens rarely!). Despite the flop of Lake George and Albany, and a near flight disaster, this was a good final topper on our upstate New York vacation cake. It was a great trip!

2 thoughts on “Lake George and Albany”