Today was the big day we were finally going to do the much awaited (at least for me) Georgetown Loop Railroad. I had been looking forward to this since I moved to Colorado a year ago.

You can’t spend a day being a railroad dork without starting off without a satisfying breakfast made by John at the Wild Horse Iinn, even though we were still super full from our over stuffed game fest from the night before. #foodporn 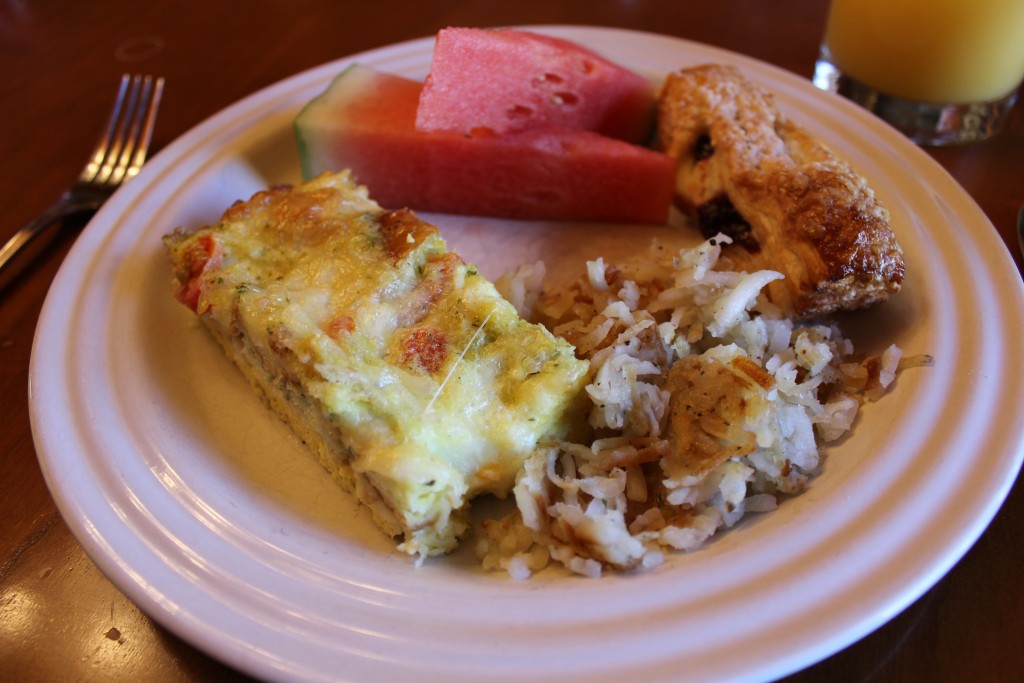 After breakfast, I finally found some time to check out eh Wild Horse Inn garden prior to us finding another hike.

Besides some lovely places to sit and enjoy my my morning coffee, there were also some native Colorado wildflowers. 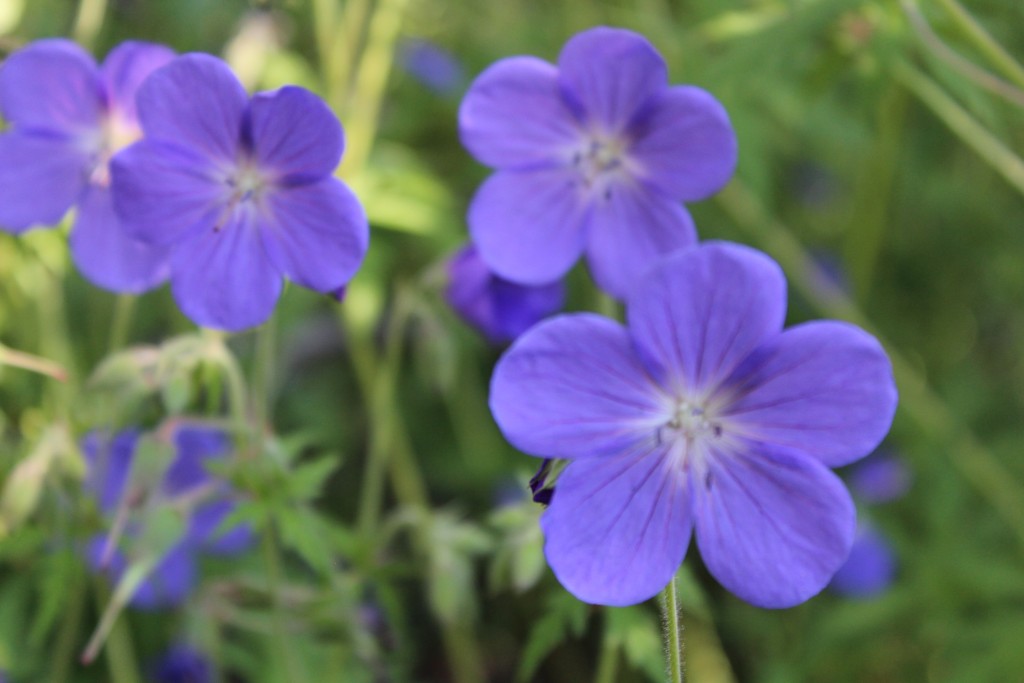 The garden also included some herbs and vegetables used in the breakfast preparation. 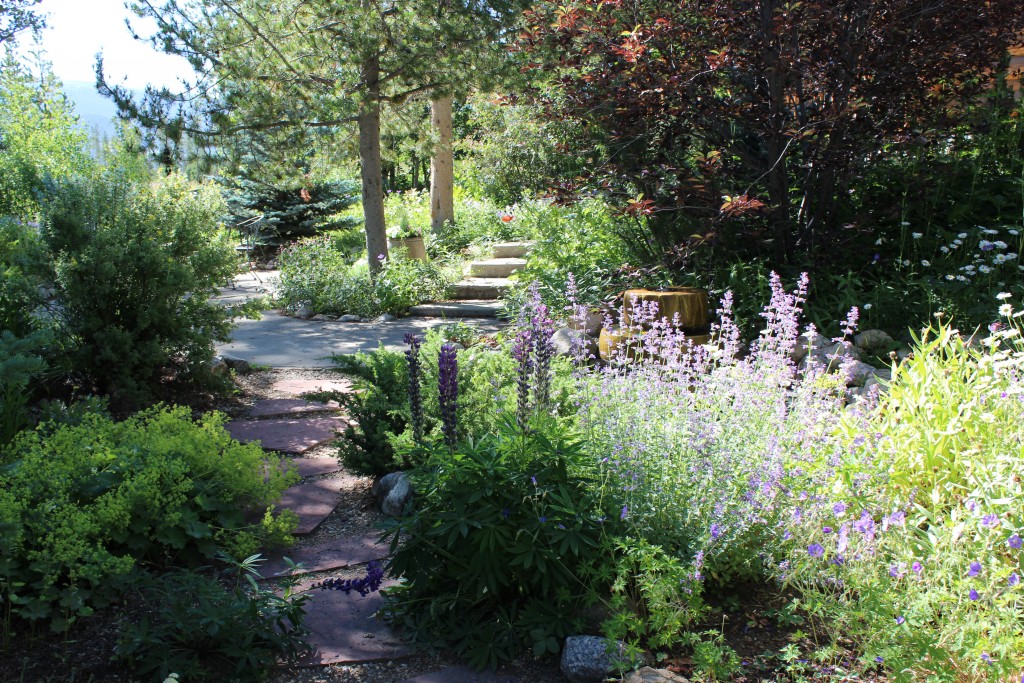 Since it was going to be hot today, and since we were heading to the Georgetown Loop Railroad in the late afternoon, we wanted to get an early start with the hiking – that meant out the door by 10AM. For us, that was an early start. And, we actually made it so.

We decided to go for the Columbine Lake Trail, even though the inn receptionist, Donna, mentioned that we might also like the Meadow Creek Reservoir trail because their had been moose sightings by other guests. The waiter from the Tabernash Tavern had recommended the Columbine Lake Trail, and I also did a bit of research on it on AllTrails before setting up and it was a 5 mile out and back with a bit of an off-road drive to get in.

After about 30 minutes of back road driving, the road started to get really tough. I was the of the mind to keep going. Google Maps said we had about 5 miles until the trail-head even began. My dad seemed a little uncomfortable with the road and wasn’t sure I was used to driving that kind of terrain so I decided to pull the plug and park and we changed the plan. 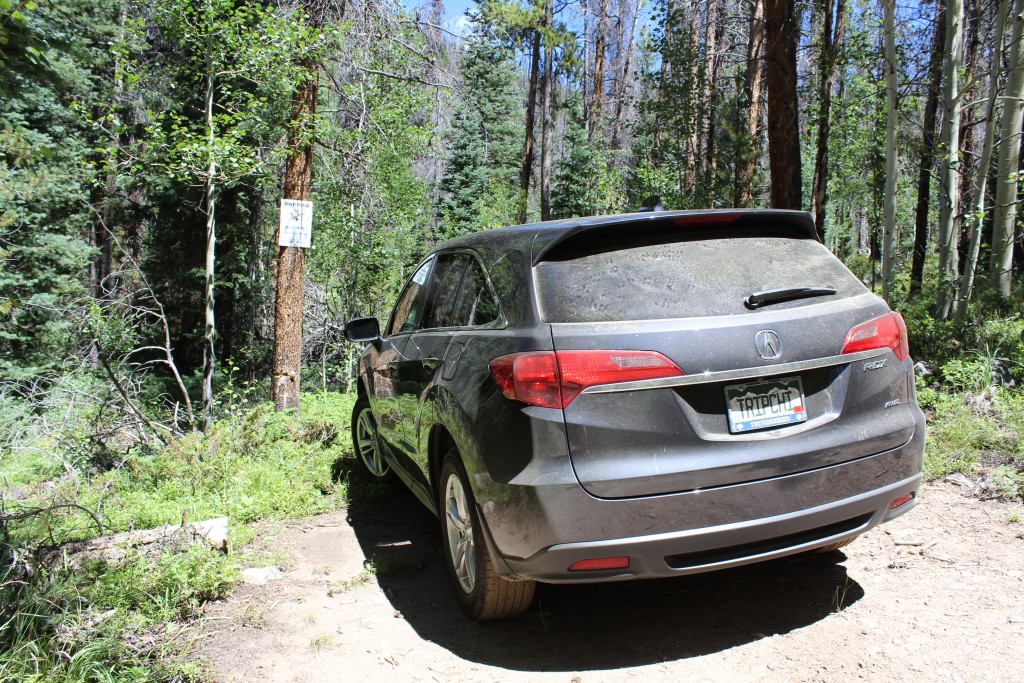 The Acura did well

The hike wouldn’t be particularly good (would just be up the road) but at least it would be isolated, uphill, and with views. 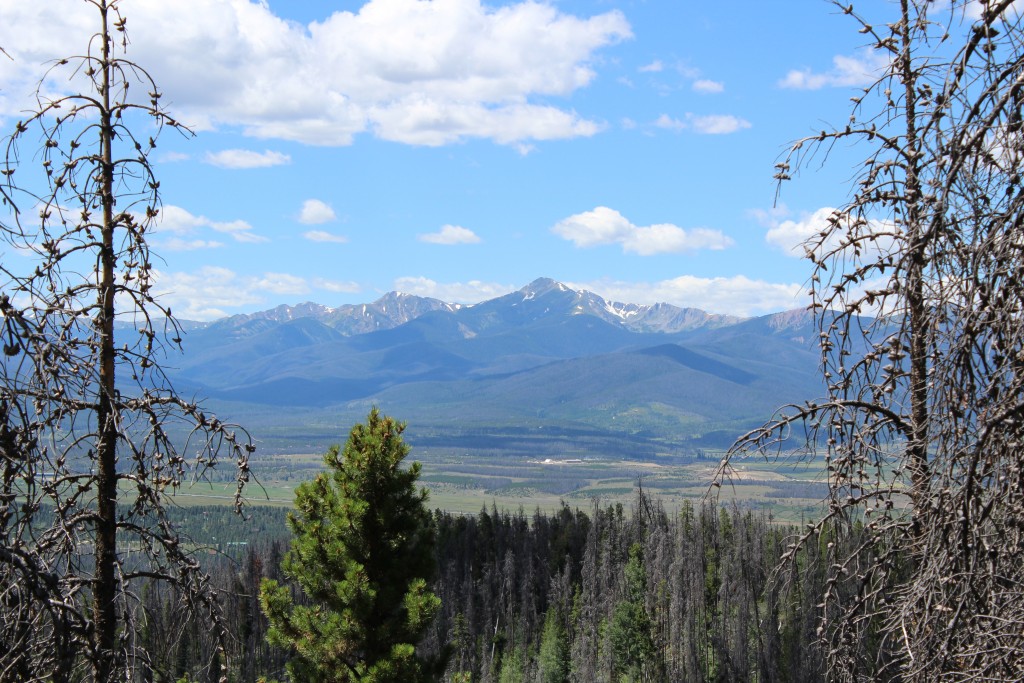 We did that for about 3 miles in, got to a peak of sorts, and turned around, never making it to a trail head. It was good enough for us though, and we got some great vista on the way down especially. 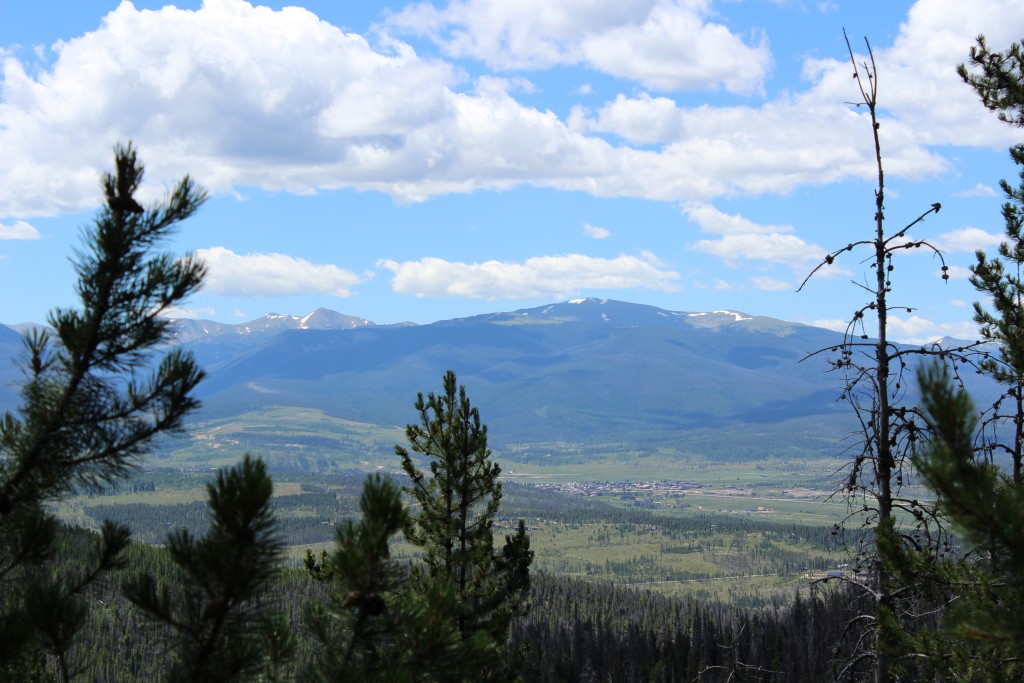 Note: the road was just find for the rest of the way and we should have kept going.

After the hike, we were all pretty wiped out, and the sun was out in full force. On the drive back, we stopped and took some snaps of some gorgeous meadows and hilly terrain. 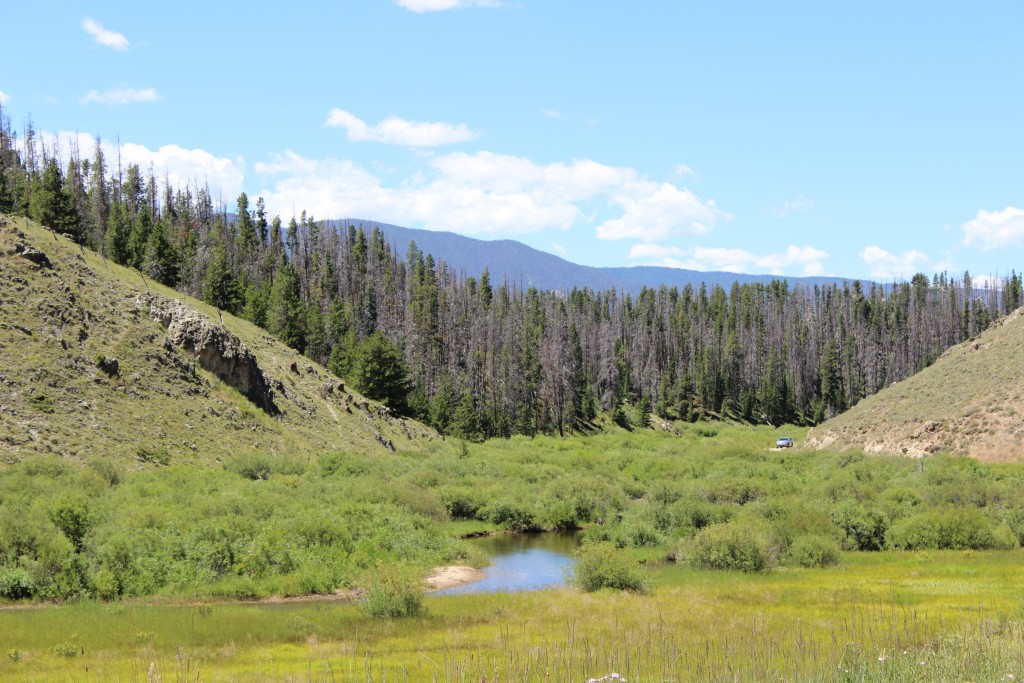 Here’s the view looking North towards Winter Park from Fraser and where we were near the Columbine Lake Trail: 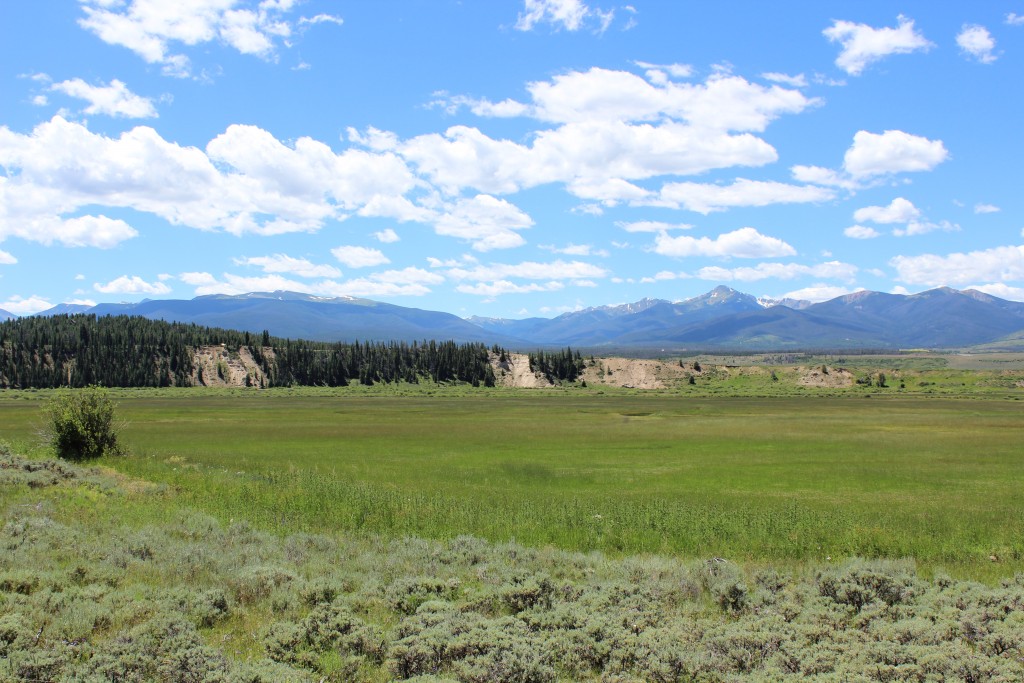 Back on the homestead (Wild Horse Inn), we read, showered, ate our leftovers from the night before, and readied ourselves for the big event of the day – the long awaited Georgetown Loop Railroad adventure.

We headed down to Georgetown around 330PM and made it in to town by 430PM, first stopping at the Visitor’s Center to get the lay of the land. Then we went over to the Devil’s Gate Station thinking that’s where we would be checking in and catching the train from. That’s where the picturesqueness steam train runs from where the Devil’s Gate Bridge towers overhead. 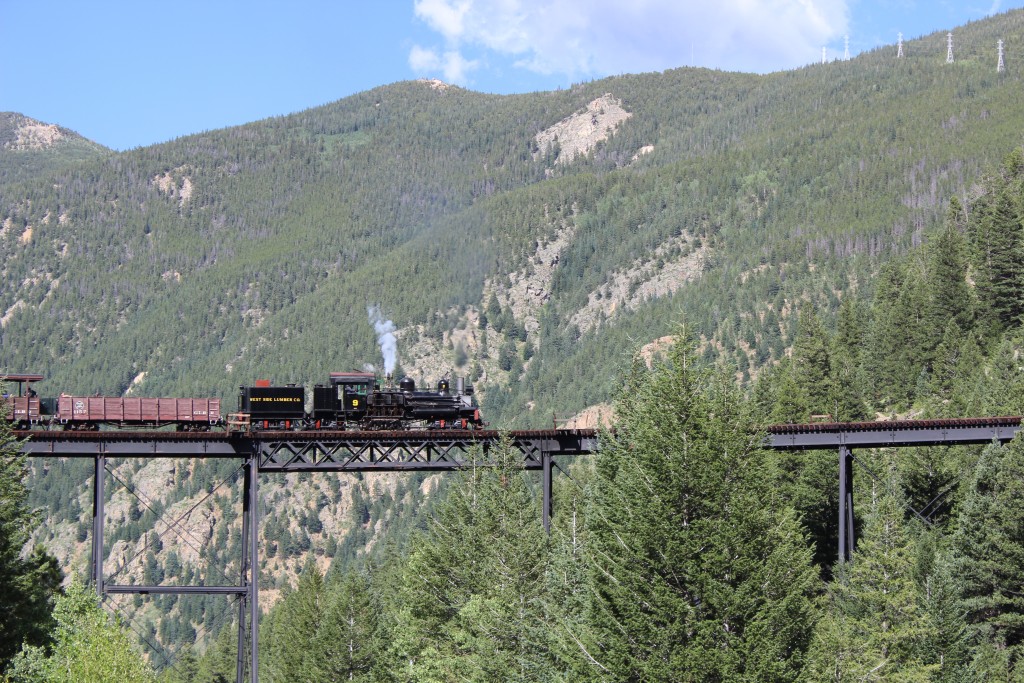 We had purchased tickets a few months in advance online for the special 6PM wine and cheese train, and not really being sure where to go, showed up at the ticket office at the Devil’s Gate Station stop. Good thing we did – because we were in the wrong place! We had to actually go to Silver Plume, not Georgetown, to catch the wine and cheese 6PM special train. But, we made the most of our stop at Devil’s Gate Station at the Georgetown Loop Railroad and took lots of pictures and hammed it up with the platform conductor. 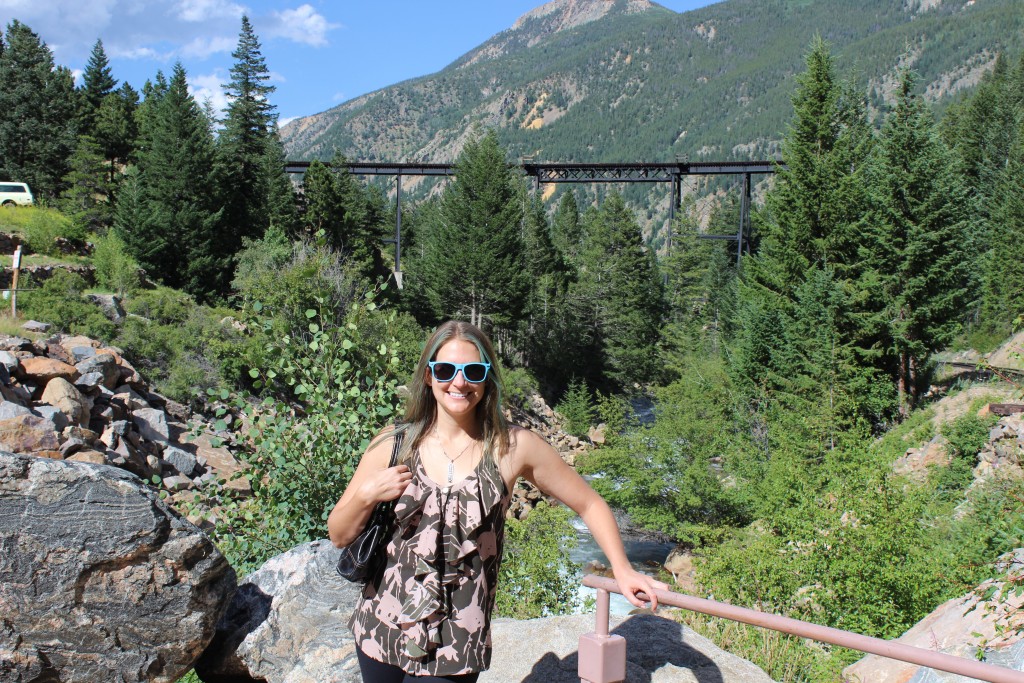 He even told me where to stand to get the best shots! 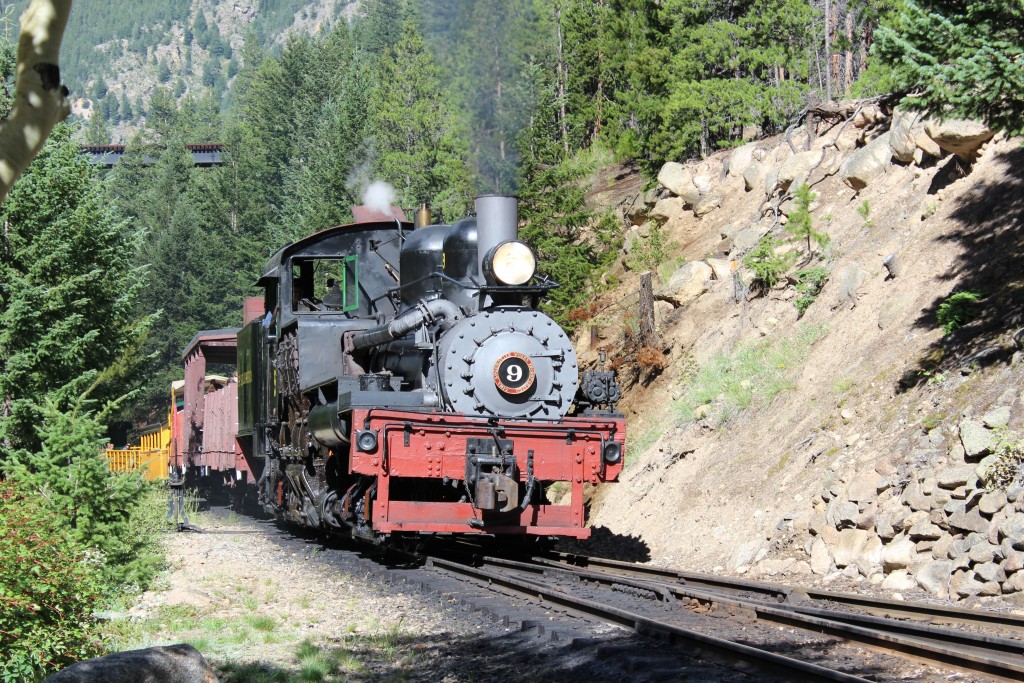 She’ll be coming round the mountain…at the Georgetown Loop Railroad!

We had a little more time to kill so I thought it would be fun to take my parents in to Georgetown and walk around the charming town. I had been there a few times before and had even snow-shoed Guanella Pass.

The town was as picturesque as ever, and it struck me this time how much it resembled a small little French town. (Why?)

Note to self: come back and check out the old-fashioned soda fountain. It can’t possibly be as good as the one in Chugwater, Wyoming. 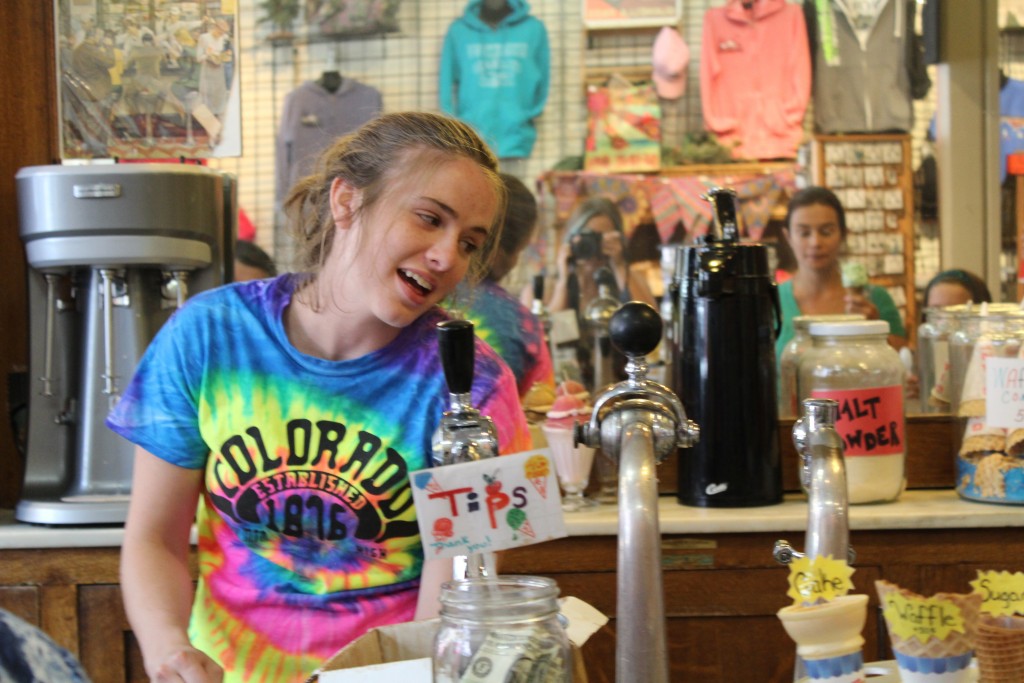 Even though we liked Georgetown, we were are very glad we stayed in Fraser and at the Wild Horse Inn. The option we had been considered with the Hotel Chateaux Chamonix in Georgetown and frankly it looked dilapidated and kitch-romantic Euro-trash in person.

The first thing I saw once we parked was this little guy. LOL. I know I can put this to good use in a PPT.

There were a lot of old railcars hanging around, as well as a museum that we spent some time in before boarding. 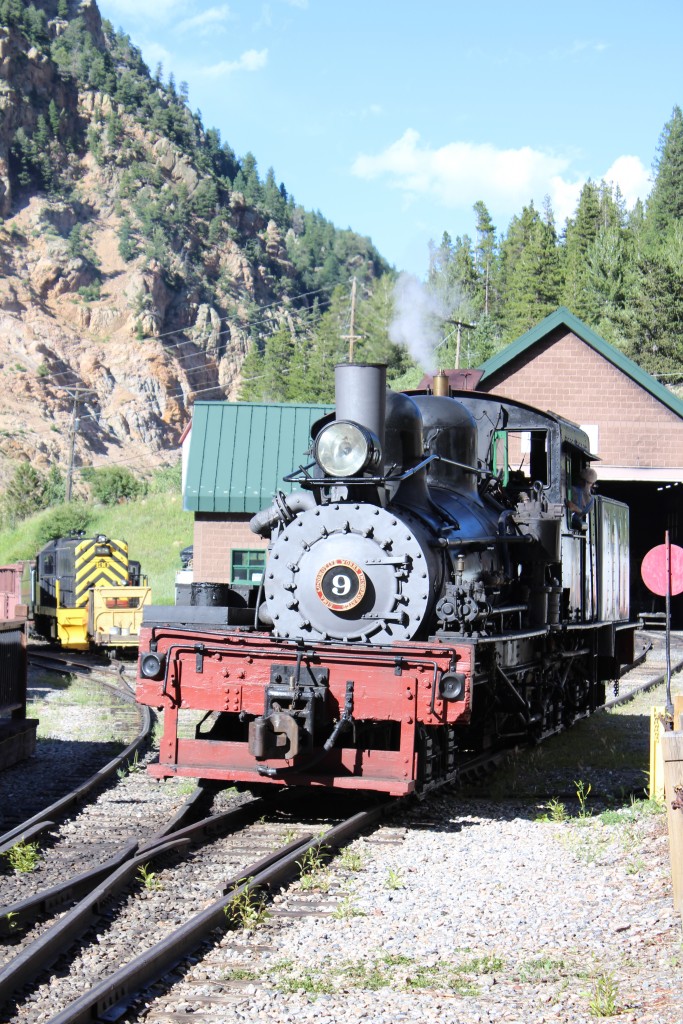 The Silver Plume Georgetown Loop Railroad station and platform itself had character too. 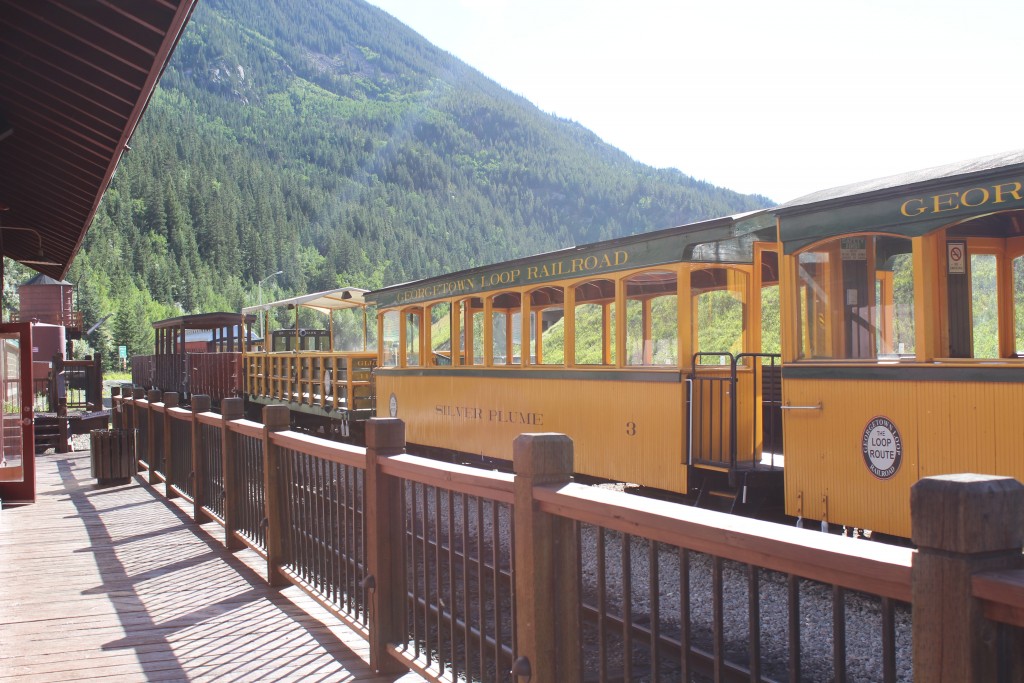 Boarding was organized and we found ourselves seated in A1 – in the caboose. Right away we found 2 lovely cheese plates waiting for us and we were not shy about digging in before the train even started to move 🙂 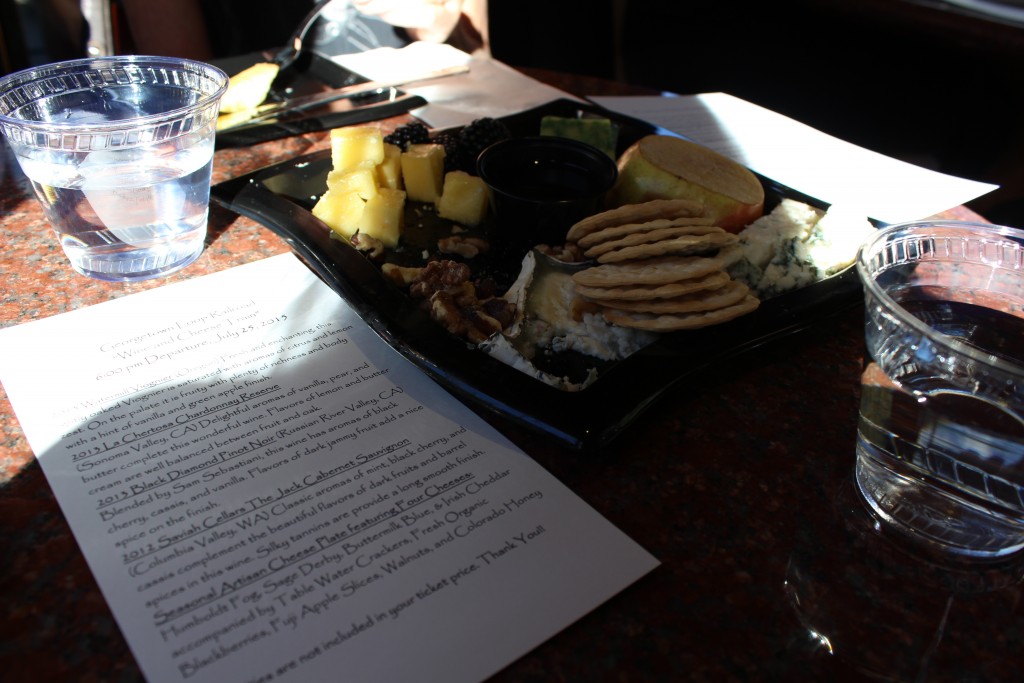 Cheese on the Georgetown Loop Railroad

The wines didn’t suck either. We all agreed that the cheese were actually pretty high quality, as were the wines. The pours were small, but the cheese plates were large enough that we didn’t end up needing dinner. You can take a look at the sample menu in the picture above. The only item I really didn’t like (beside the blue cheese which never is a hit with me) was the Chardonnay which was the richest, butteriest, sweetest, Chardonnay I have ever had and uncharacteristic of the Chardonnays I’m used to. The wines served were:

As the journey got underway, the views got better and better. 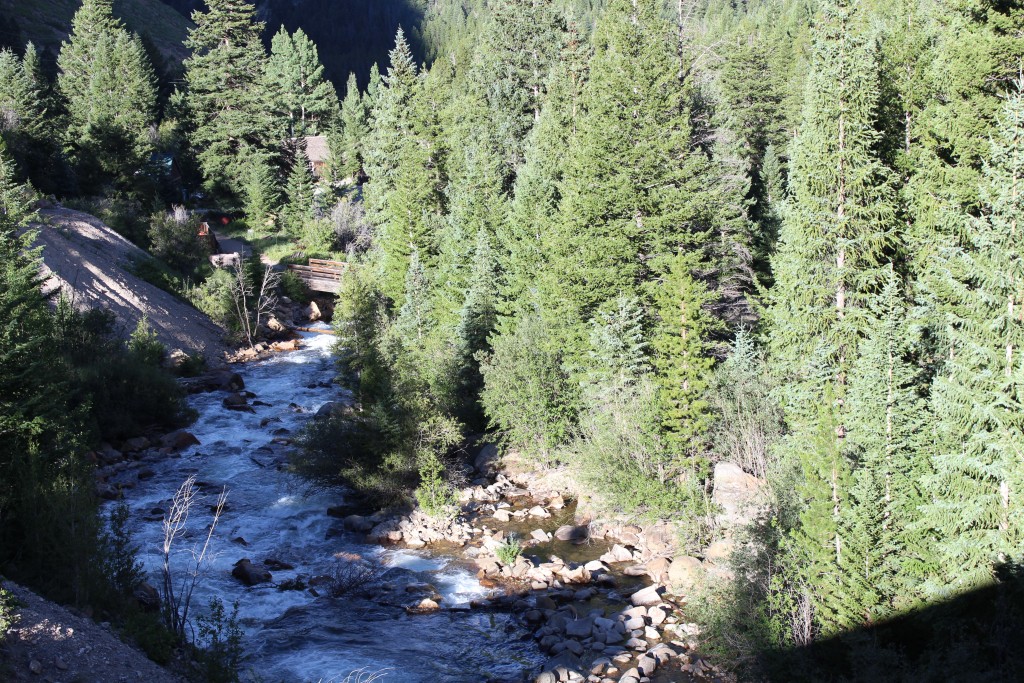 We saw the old Lebanon Mining Camp, that you can also take a tour of out of Georgetown. 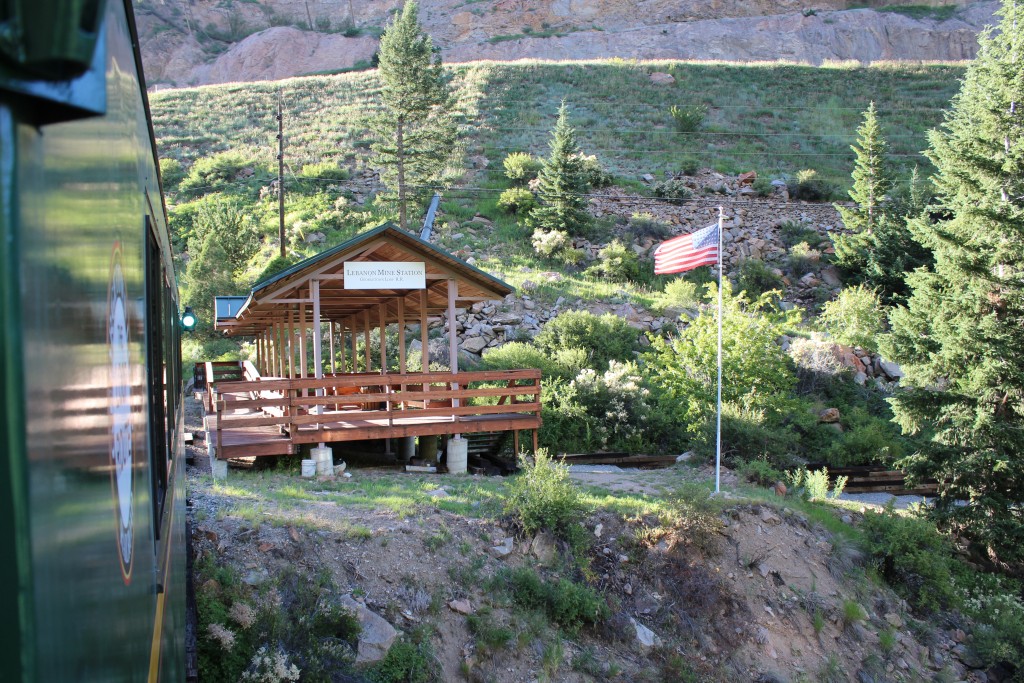 When we finally hit the Devil’s Gate bridge from atop, we took a nice long pause to take pictures. It was cool since a few hours before, we were on the ground taking pictures of the train above. 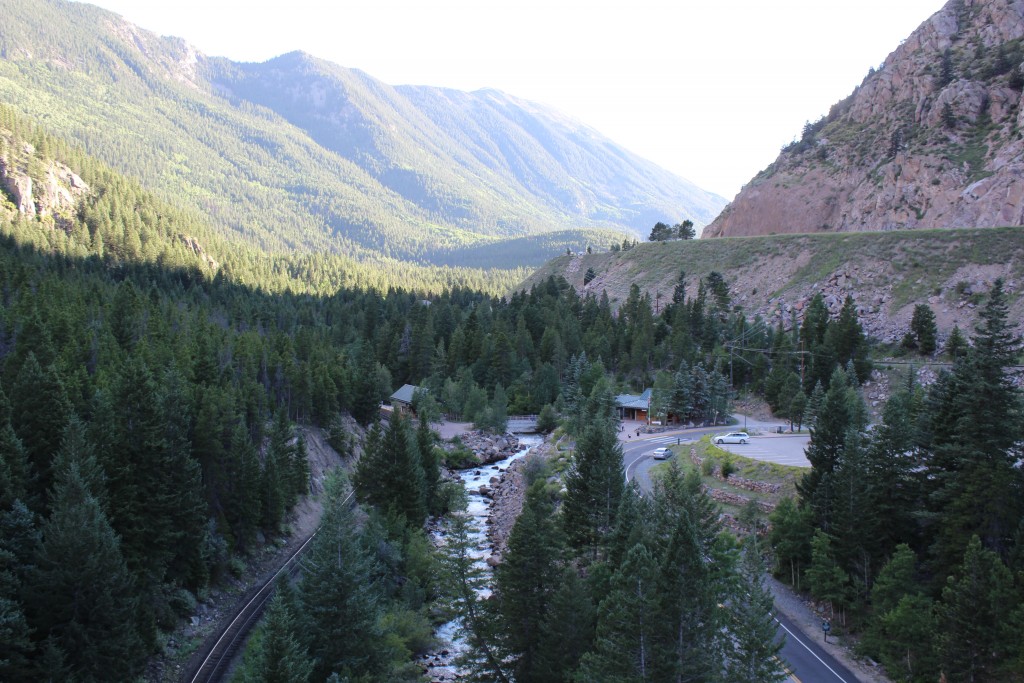 Interesting story about the bridge that the conductor told us as we were stopped overhead. Apparently it was a bridge that was ordered and assembled from a kit from a company out in the East. The kit arrived, presumably with instructions, but the engineers assembled it backwards, had to take it apart when they realized the error and reassembled. Now of course it is assembled correctly 😉 Also a side note – and I only noticed this about 75% of the way through the journey – the conductor had an Irish accent that only came out when getting into the stories he was telling about the Georgetown Loop Railroad’s history. Not sure if he was Daniel Day Lewis method acted or if he was actually Irish!

Here’s some perspective of the train carriages over the bridge:

We paused again at the Devil’s Gate Station for a bathroom break, and I was able to get this end-to-end shop of the Georgetown Loop Railroad train. 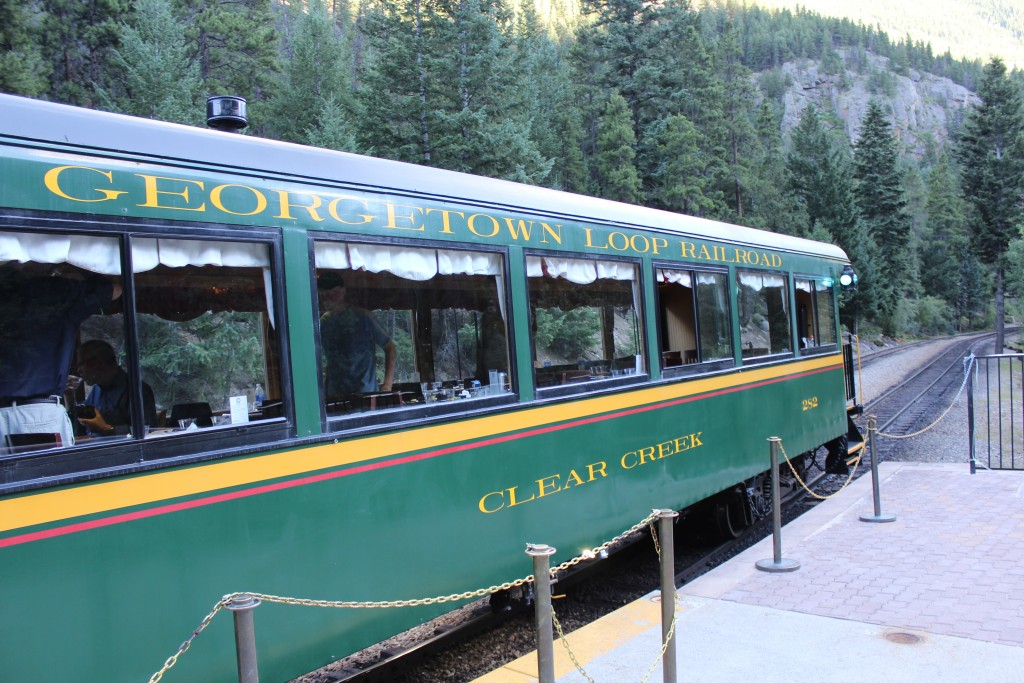 I also went to the end of the caboose and took some shots of the tracks behind us. Eventually they switched the direction and had the engine push the train from behind to reach back to Silver Plume.

One of the other highlights of the evening was when the conductor/narrator/storyteller was pointing out some of the defects of the old Georgetown Loop Railroad that made them eventually have to take it down in to retirement. I mentioned that these were “features” and not “defects.” The guy sitting at the table to the right of me looked at me and said “You’re in software, right?” He called it! LOL. 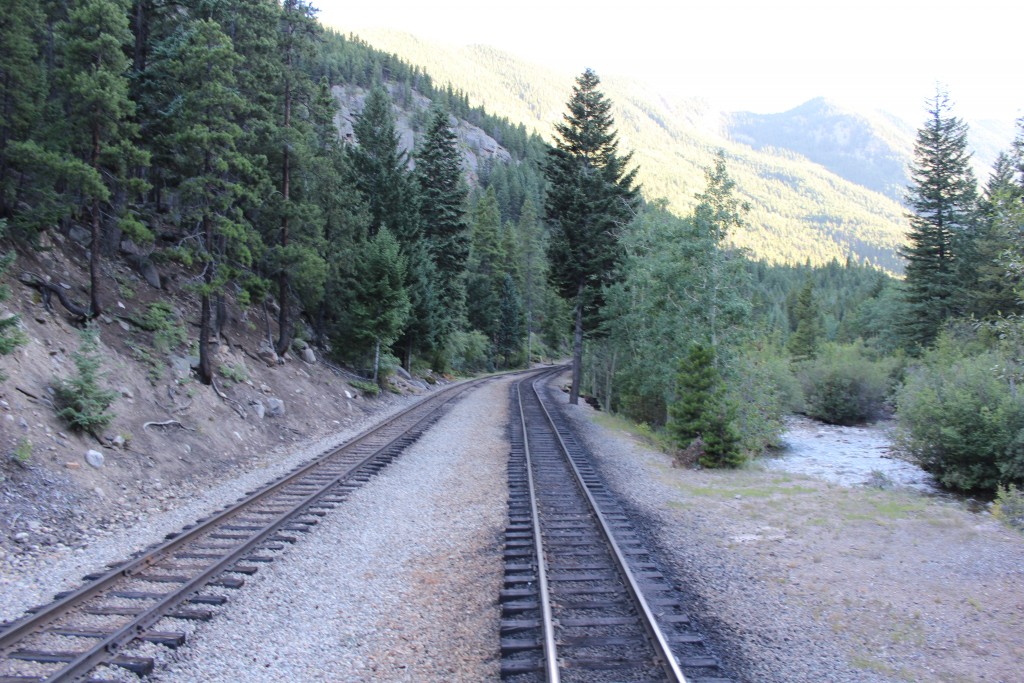 The train took a little longer than expected getting back in to Silver Plume and we were quite tired by the day’s end. It rolled in to the station around 815PM, so we really weren’t back at Wild Horse Inn until 915PM or so…not even needing dinner, dessert, or more drinks. Exhaustion was the only thing on the mind. My parents commented that I looked like a “whipped puppy”, which was about how I felt. It was a long day out in the sun, and I had been looking forward to the Georgetown Loop Railroad for sooo long, and it was sooo awesome, that when it finally came and went….I was just ready to sleep. And so we did.

One thought on “Georgetown Loop Railroad”