This morning we met out guide for the next week, Aitor Delgado, at the Claris Hotel around 9AM to make our way from Barcelona to Andorra. I found him on LinkedIn through a mutual connection from my time in Bilbao (I think). Leslie, Aitor, and I had written dozens of emails over the past 2 months planning out the itinerary and the trip, negotiating the details, and essentially filling the void of travel agent (we decided to go it our own this time to save money). We took the rental car that Leslie arranged in advance and started on the road not shortly after from Barcelona to Andorra.

The Road from Barcelona to Andorra

The car, a Citroen touring car (Picasso hatchback) was extremely comfortable for 4 and fit our luggage in the trunk perfectly. As we got going, it didn’t taken Marv long to take a shine to Aitor – once it came out that Aitor was previously an analytical chemist dealing with quality control in manufacturing, Marv and Aitor were fast friends. Barcelona to Andorra was only the beginning.

Out of Barcelona to Andorra La Vella

Our practice with the Catalonian accent began to pay off as we got deeper in to the Pyrenees, and especially as we passed over the border into Andorra itself (there was a border crossing but the guards let us roll through without stopping). I had previously thought that Andorra was part of Spain, but it’s actually its own country, one of the 4 smallest in Europe, with only around 80,000 people. Culturally it identifies itself with Catalonia. Andorra also boasts a huge tourism industry (10 million visitors each year) and also is a tax haven. I also didn’t realize it’s no part of the EU, although the currency is the Euro (but is a full member of the UN). Another random Wikipedia factoid is that Andorra sports the third highest life expectancy in the world at 84 years.

Created under a charter in A.D. 988, Andorra was formed in A.D. 1278 as an independent principality, which is headed by two Co-Princes – the Spanish/Roman Catholic Bishop of Urquell and the President of France. We stopped in the capital, Andorra la Vella, for a small walking tour and of course for the most important part of the day – lunch. Andorra la Vella is one of three mountain valleys that compose the major living areas of the country, and is also the highest capital city in Europe. We found out from Aitor that Andorra La Vella is named for a mis-translation of the word “old” that turned in to “beautiful.” It really reminded me of Vail, CO or other US mountain town ski resorts. It was old, and beautiful. Take a look.

Imagine those mountains with snow on them in the winter time, and ski lifts dotting the hillside. And little cafes serving hot drinks and coffee throughout the squares. 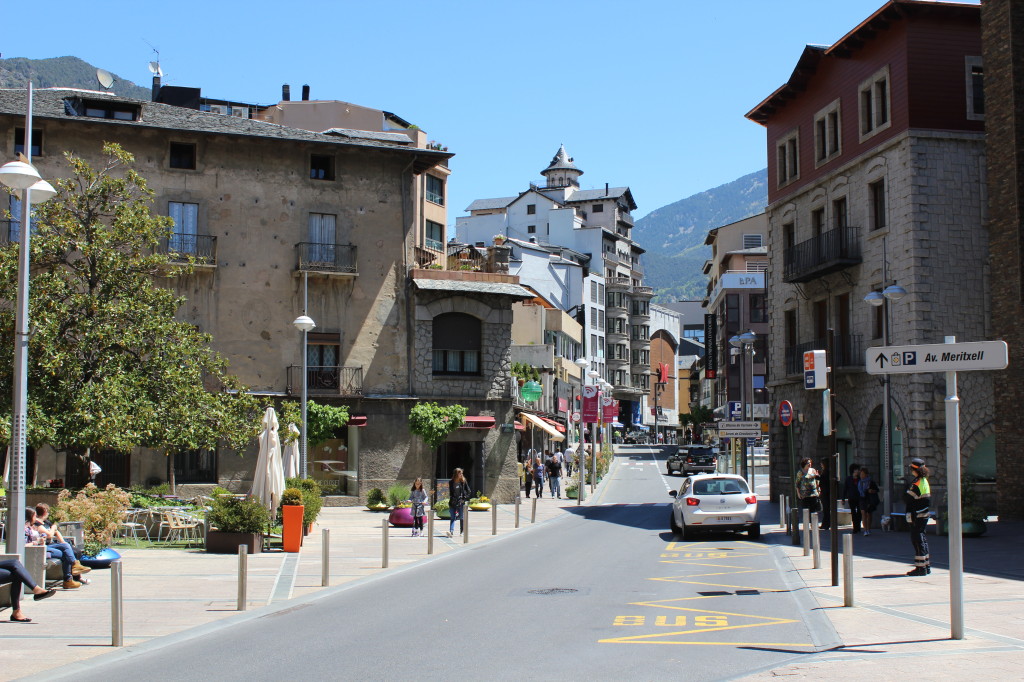 Also notice the man-statues on poles around the fountain. 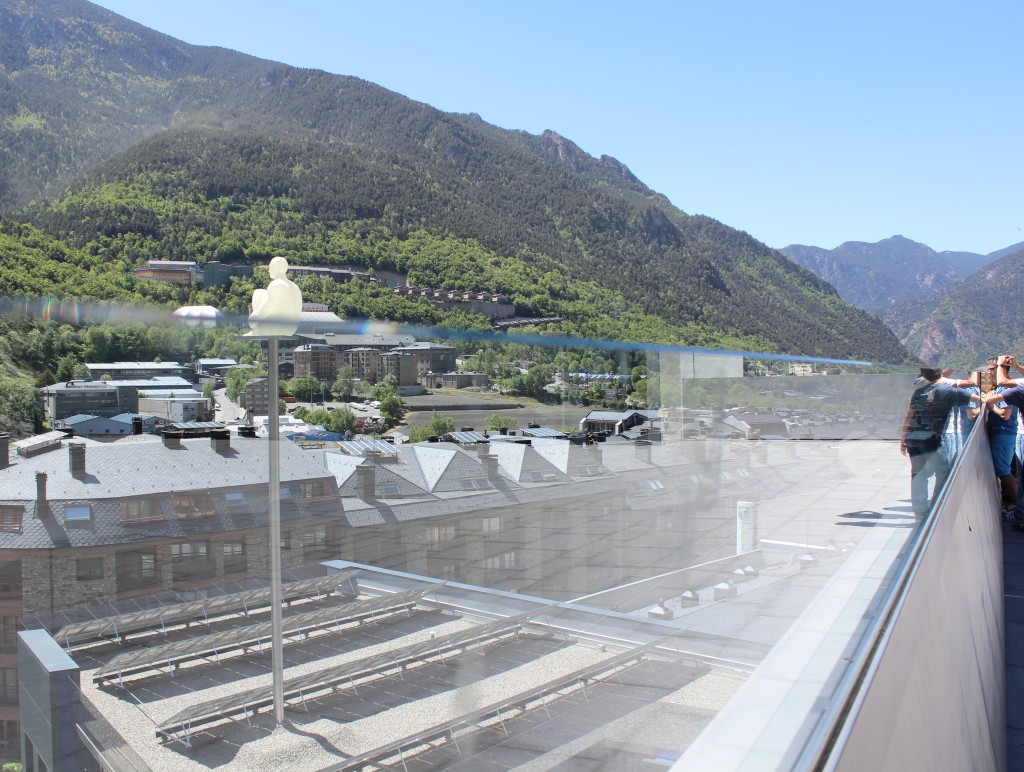 At first I thought “WTF” – but it turns out that it’s a sculpture called 7 Poetes (Poets) by Jaume Plensa, commissioned recently in 2014 – and is supposed to awaken our spirituality and make us “look up” the same way poetry does. At night, apparently the statues light up in to different colors. There is no I way I would have gotten that meaning without Googling it. 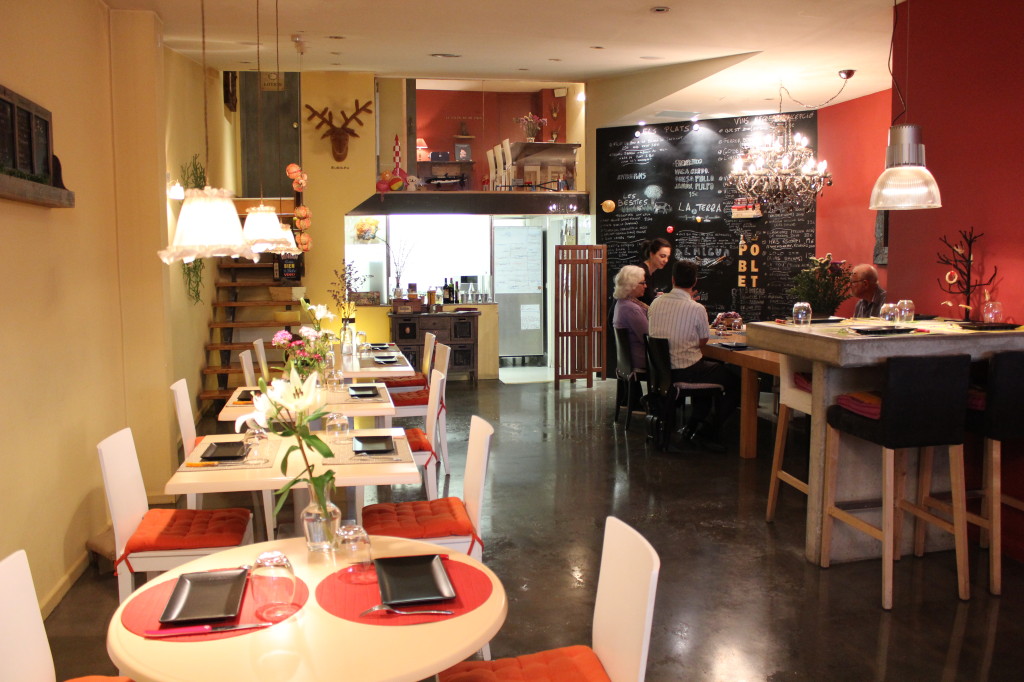 There are about 8 tables in the entire place, and a private room upstairs for more intimate dining. However my favorite part is the open kitchen in the back where you can see the food being prepared as you wait. We got a typical platter to share of cold Iberian hams and chorizo, popular in Andorra, coupled with coca (bread with tomato and olive oil), some wild mushrooms with rice (like a risotto), quail eggs, and a few other delicious things.

After lunch, we drove further up the mountain to visit Sant Miquel d’Engolasters church, dating from the 11th century. 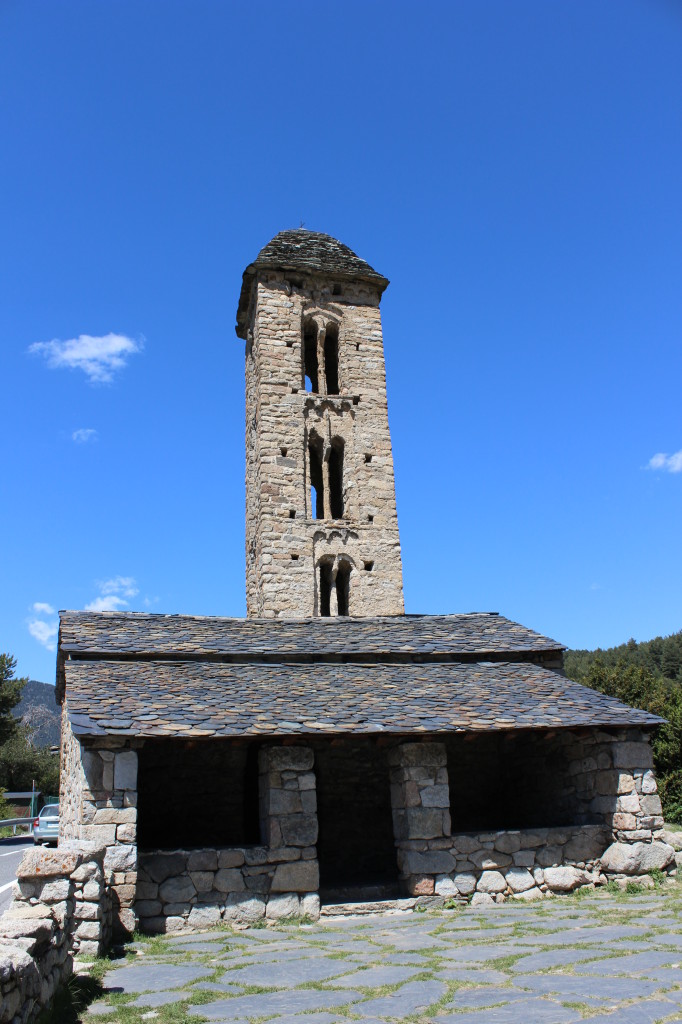 The views were much better than the church, and we all commented that this was the perfect place for a picnic since the mountains hollowed out in a small valley at this extremely high elevation, yielding a super-romantic million dollar view. 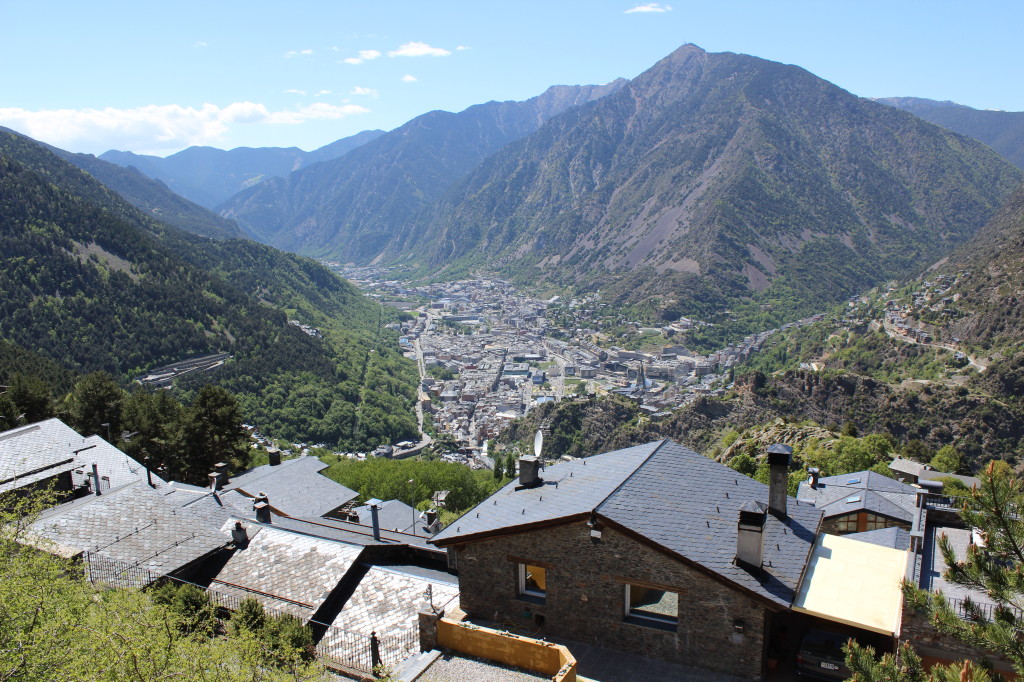 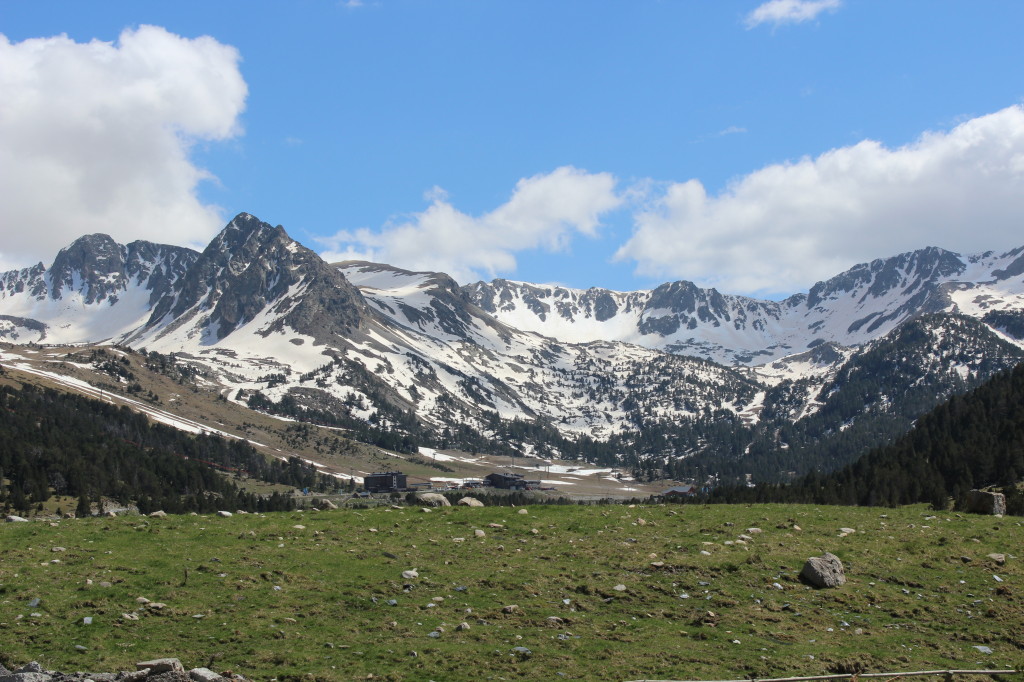 We then continued onward, crossing the Pyrenees and in to France. At this border checkpoint no one was standing guard at all and we sailed through. We stopped briefly in Foix for a bathroom break and a coffee, and enjoyed the view of the castle. 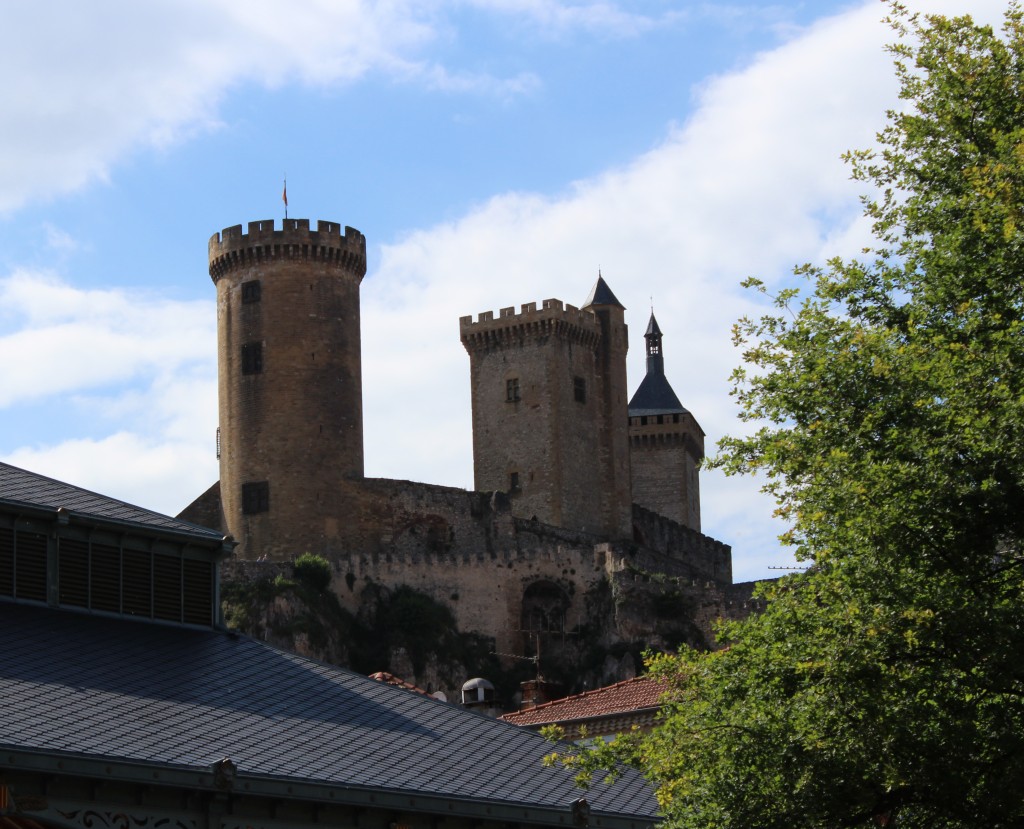 We finally reached our small French mountain village, Luz-Saint-Sauveur, after a full day driving from Barcelona to Andorra to France (around 830PM). Speaking of castles, there was a castle on the opposite side of the square from our inn, Hotel Les Templiers (incidentally managed by the town mayor, a very friendly guy)! 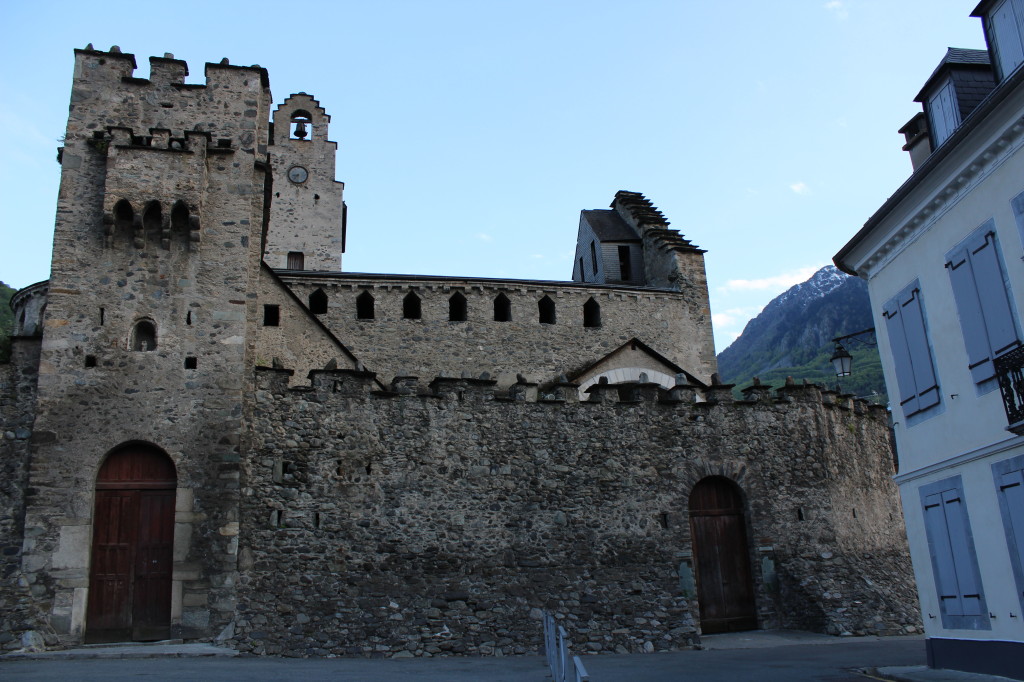 On our way to dinner we meandered through narrow streets and painted row houses with ornate doors and elegant shutters. All behind the perfect mountain backdrop again. We later found out that the town was suffering – losing money in ski season due to the recession, and the lack of Spanish tourism. 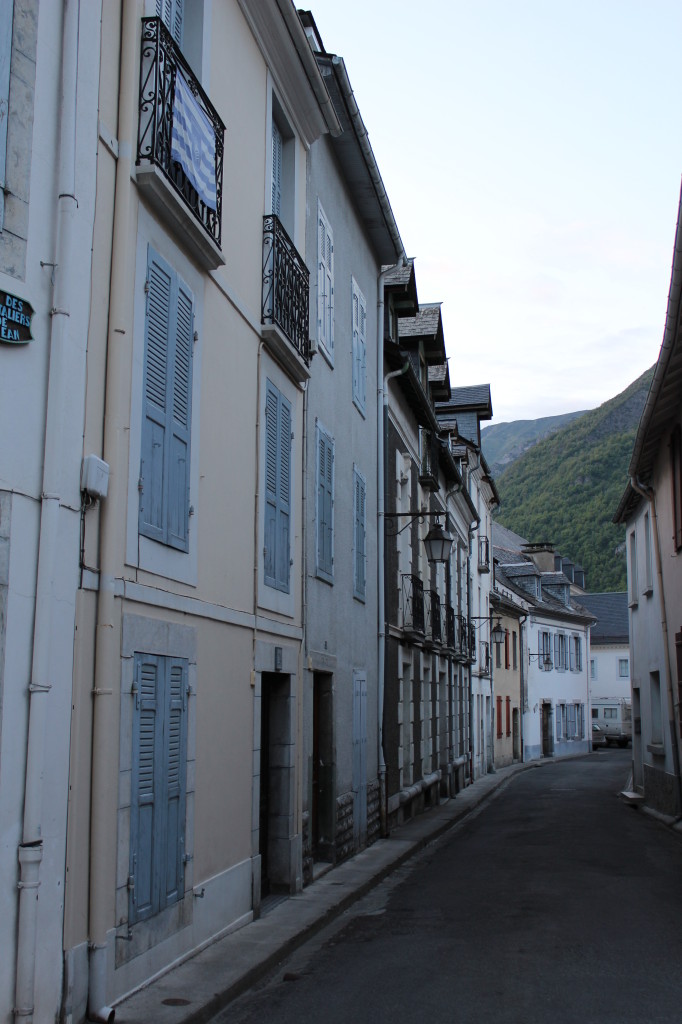 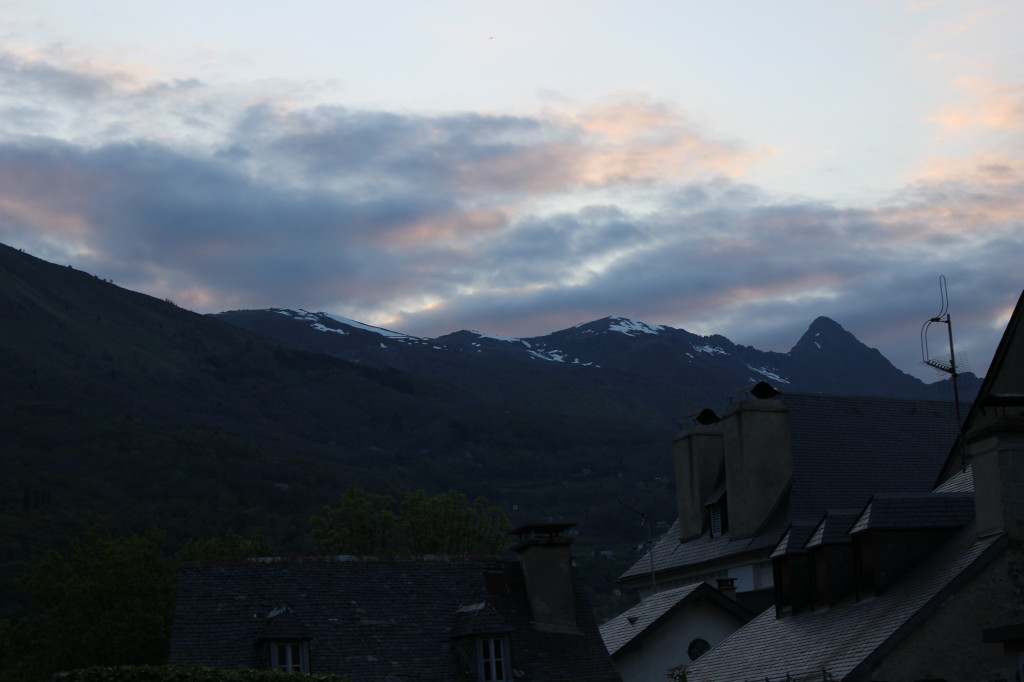 We walked to a tapas restaurant, La Tasca, for dinner, just steps from our hotel. Incidentally it was owned by a British family whose young children even helped clear tables (reminded me of Cosette in  Les Misérables, but in a much happier way). The burgers were outstanding and the goat cheese gave them a classed up touch. The fact that the place was understaffed was easily made up for by the ambiance, the gorgeous bar area, the food, and the fact that the husband-owner was kind enough to sent us his digital copies of some Tour de France photos that Marv saw hanging on the wall and offered to purchase for $50. Incidentally during Tour de France season, 10,000 people descend on this tiny village. 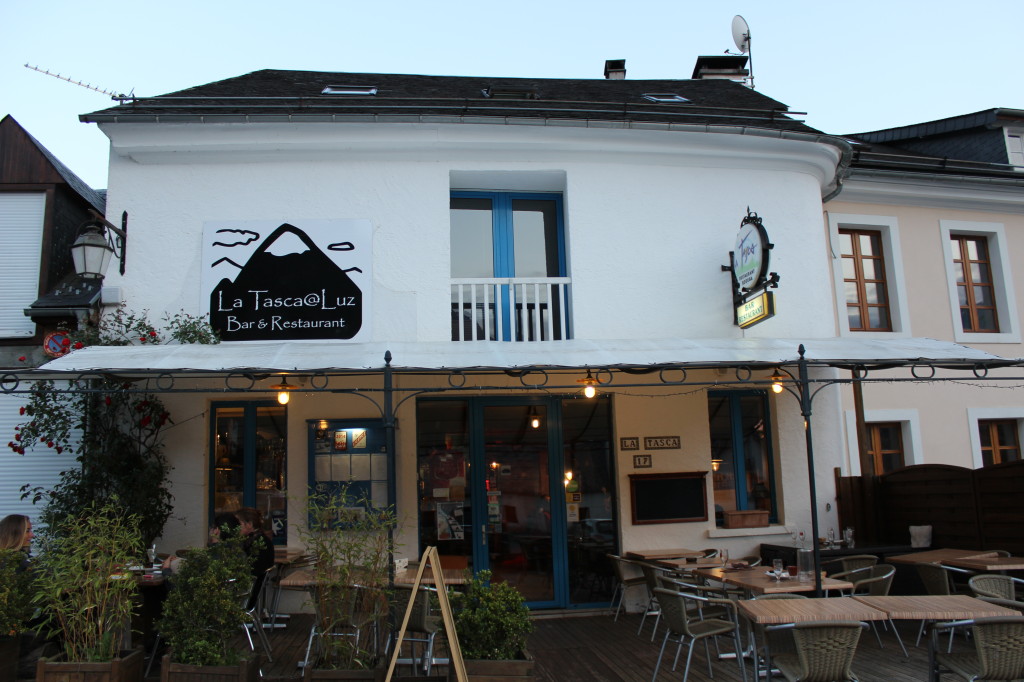 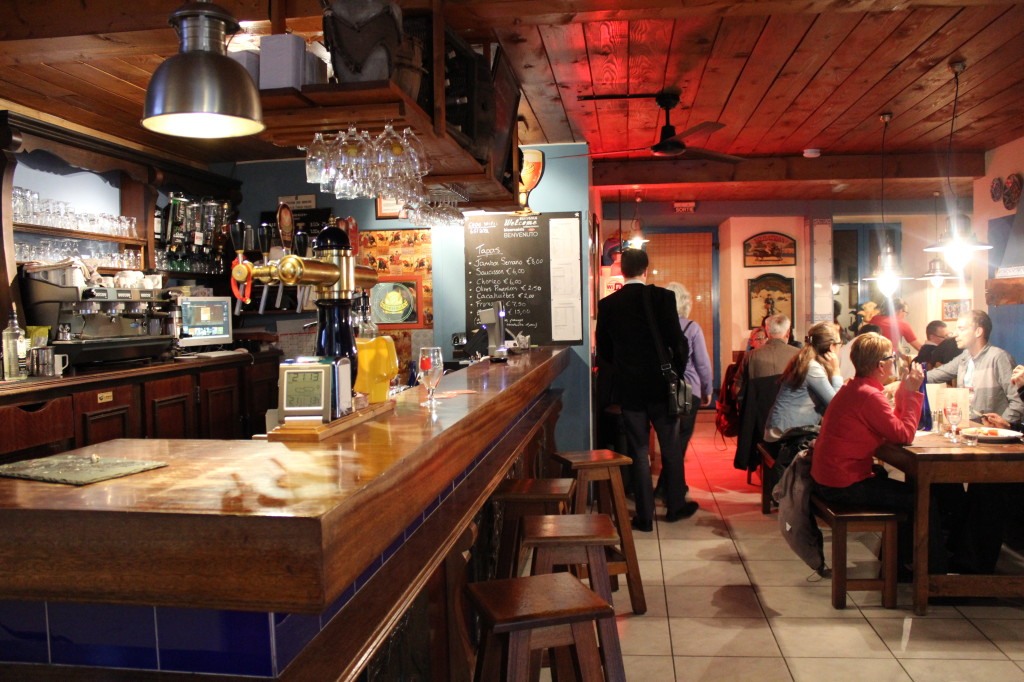 I chatted with the owners after the meal and they gave me their card for future references, and use in the blog. 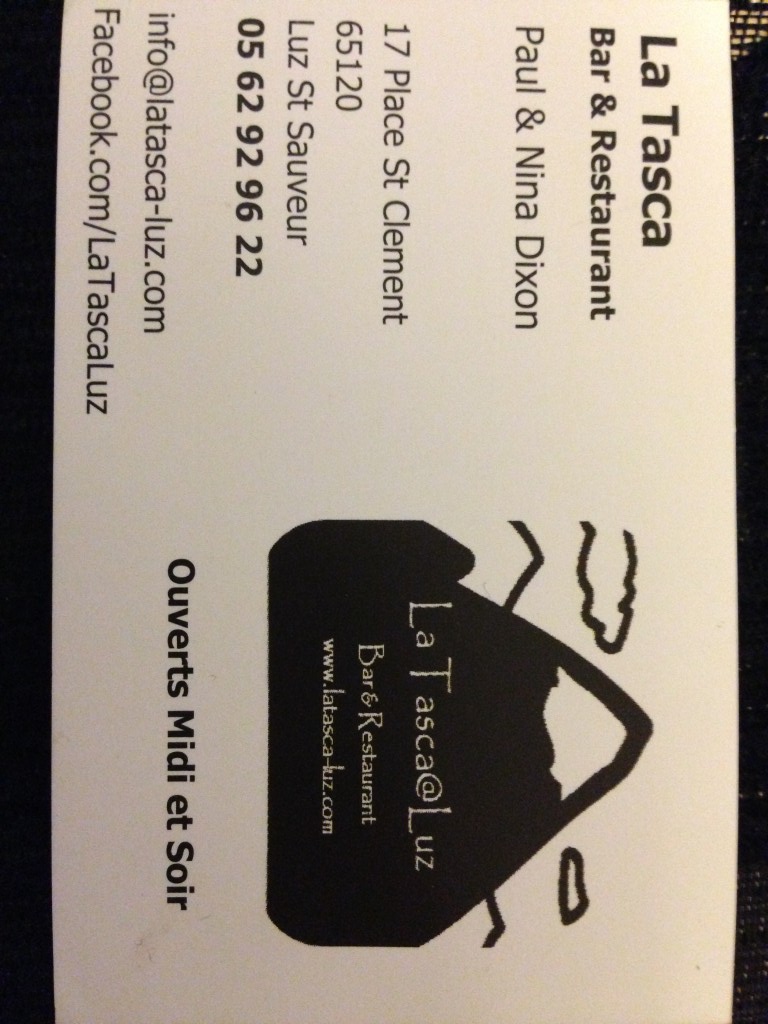 After a successful day taking us through three countries, from Barcelona to Andorra to France, we went to bad exhausted, full, and joyful, and already looking forward to our next meal….

7 thoughts on “Barcelona to Andorra and Luz-Saint-Sauveur”