We had a leisurely morning since we didn’t have any planned tours or a schedule to adhere to on this Saturday in St. George’s, Grenada, and a late departure time of 6PM. We hit the breakfast buffet and were in town by 11AM. Starting out, we went to the local market which runs Friday and Saturday until noon weekly. They sold fruit, food, and clothing more oriented to locals than to tourists, although it didn’t stop the vendors from trying! 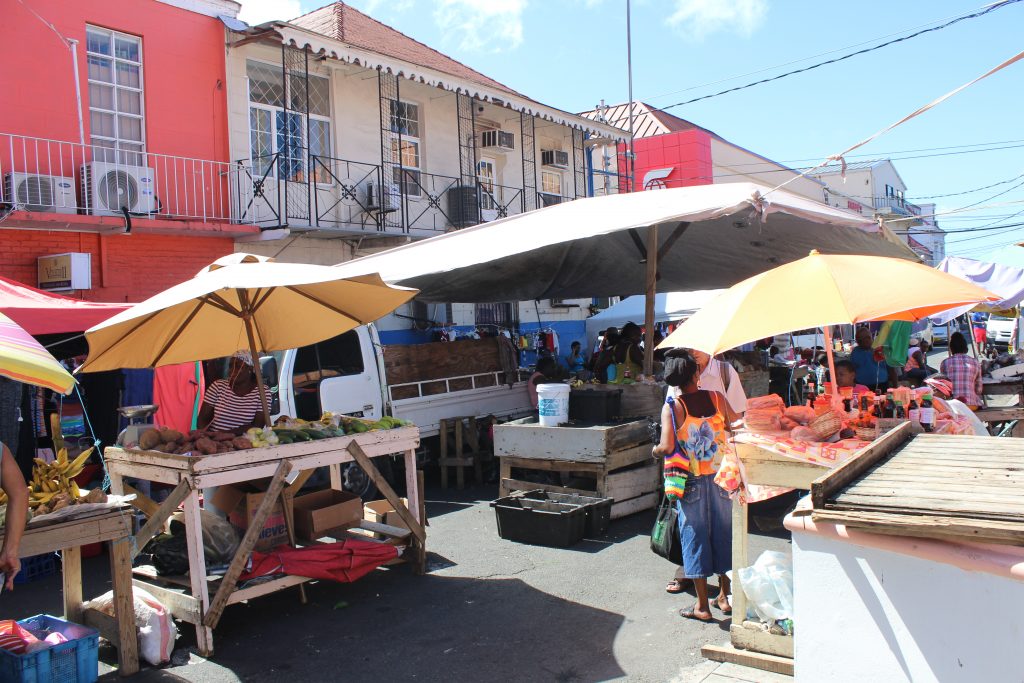 After the market, we wanted to get to a high vantage point in the city to take some pictures of the architecture and waterfront. Fort George seemed to be at a good position to accomplish this goal and was also a tourist attraction from colonial times. We hoofed it up some serpentine roads and ultimately were redirected by a local guy who told us we had to enter through a different way, even though the signs pointed towards the way we went. Rerouted and back on track, we met a taxi driver named Kevin who tried to get us to hire him for the day to go nowhere we wanted to. He tried on the way in (twice) and on the way out (once). He also directed the hustle on to a few other passerby’s as we attempted to extricate ourselves. He really outdid other the hustlers by showing us his very standard looking van.

At Fort George, we discovered there was only a $2 per person entry fee, so we decided to do it. We paid an attendant for entry who may or may not have actually worked there. She was also selling random knickknacks at the Fort’s entrance. Upon entry, we enjoyed how the interior of the fort was re-purposed in to a basketball court. 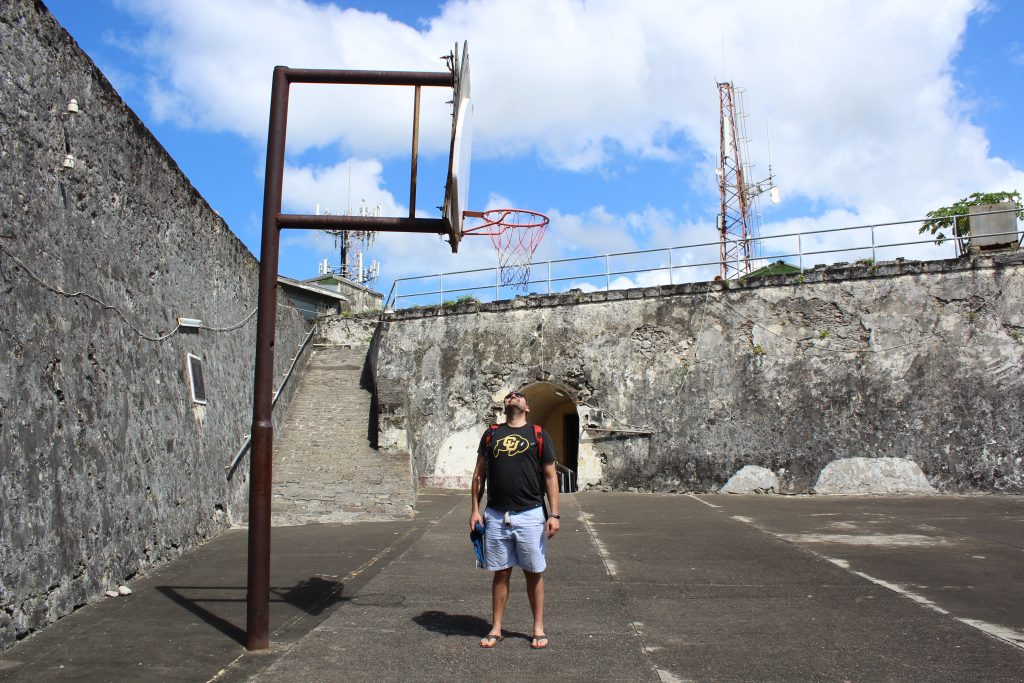 We hiked around the Fort a bit and got some good photos of the capital city of Grenada. Typical to all other islands we had visited, St. George’s had the characteristic colorful buildings, palm trees, and white sand beaches. 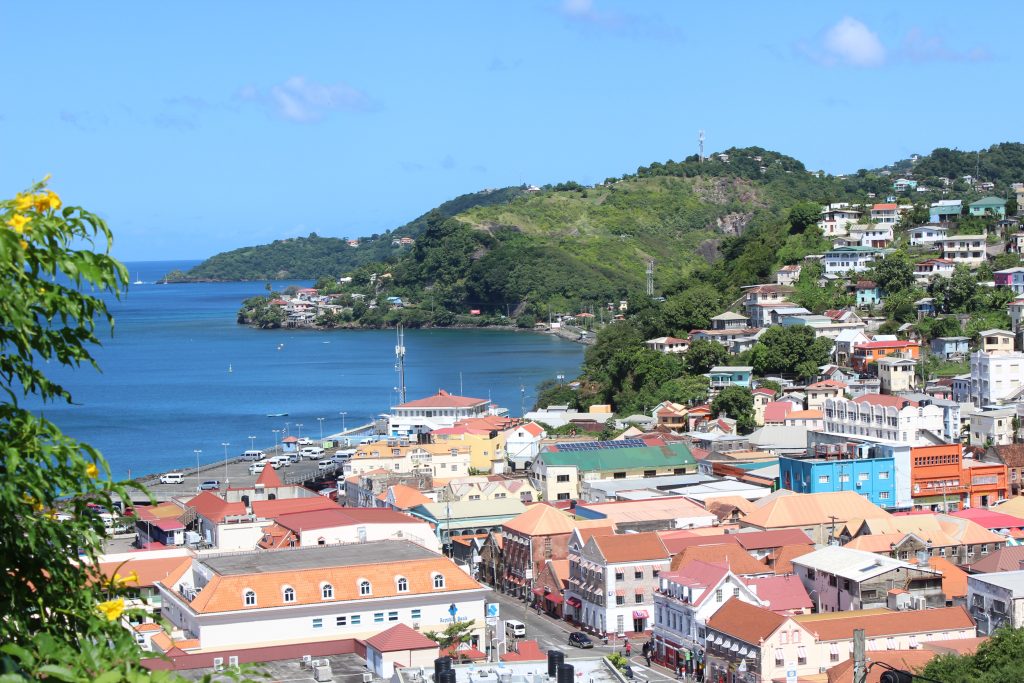 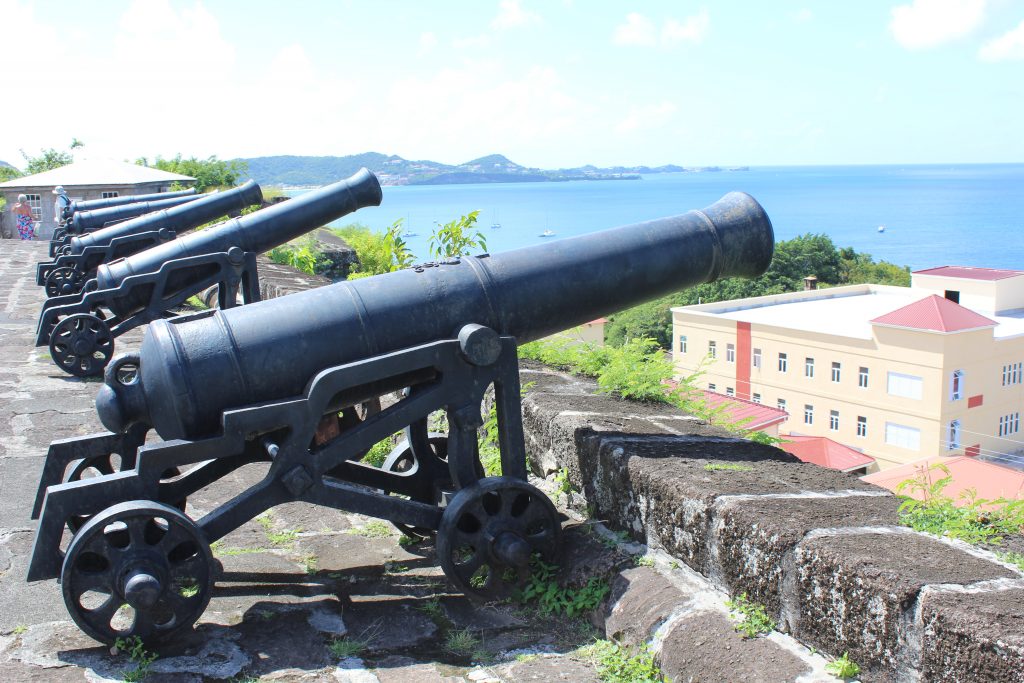 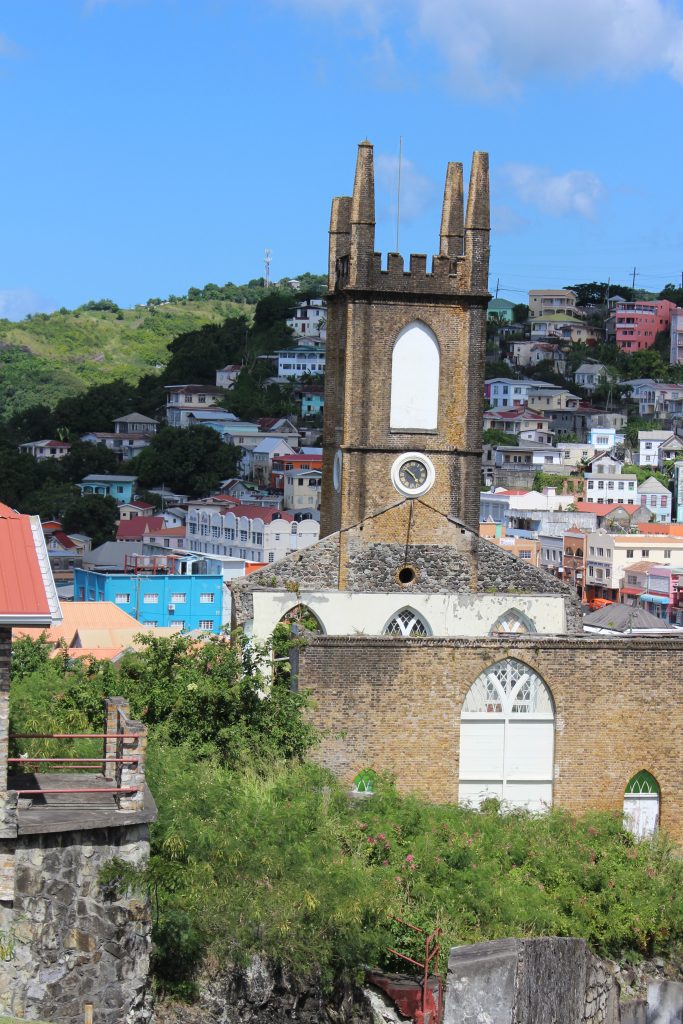 I found a nice shot of new versus old – cannons and satellite dishes.

And also thought the picture of the Celebrity Silhouette side by side with a smaller ship made a nice view. 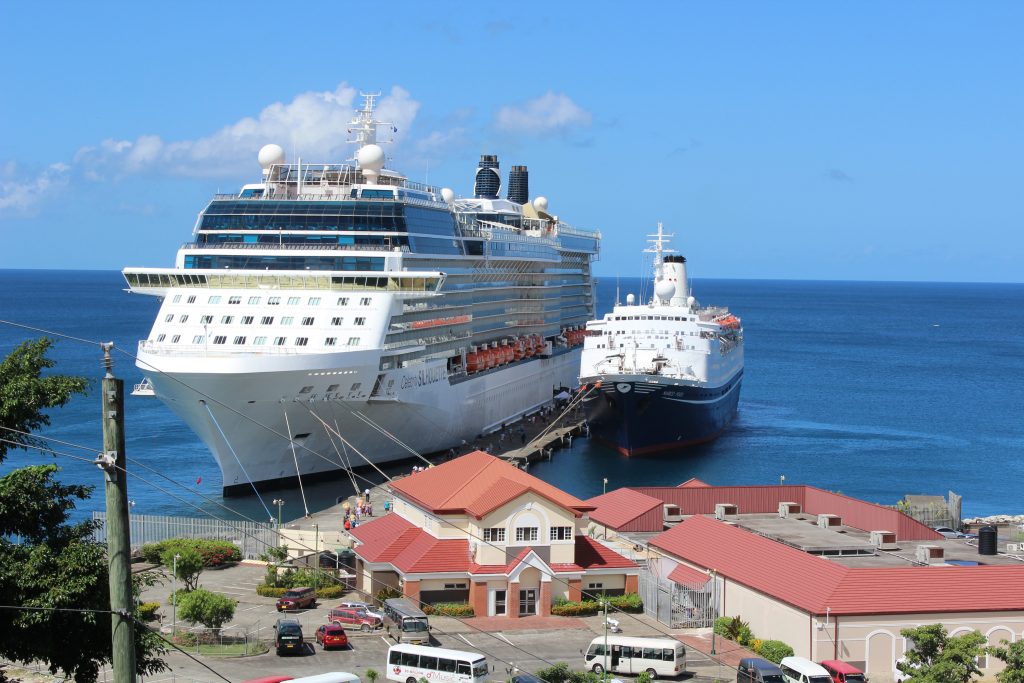 Towards the back of the St. George Fort and away from the ocean, we also noticed a protected bay down and behind Fort George called the Carenage, which is essentially a waterfront promenade area. 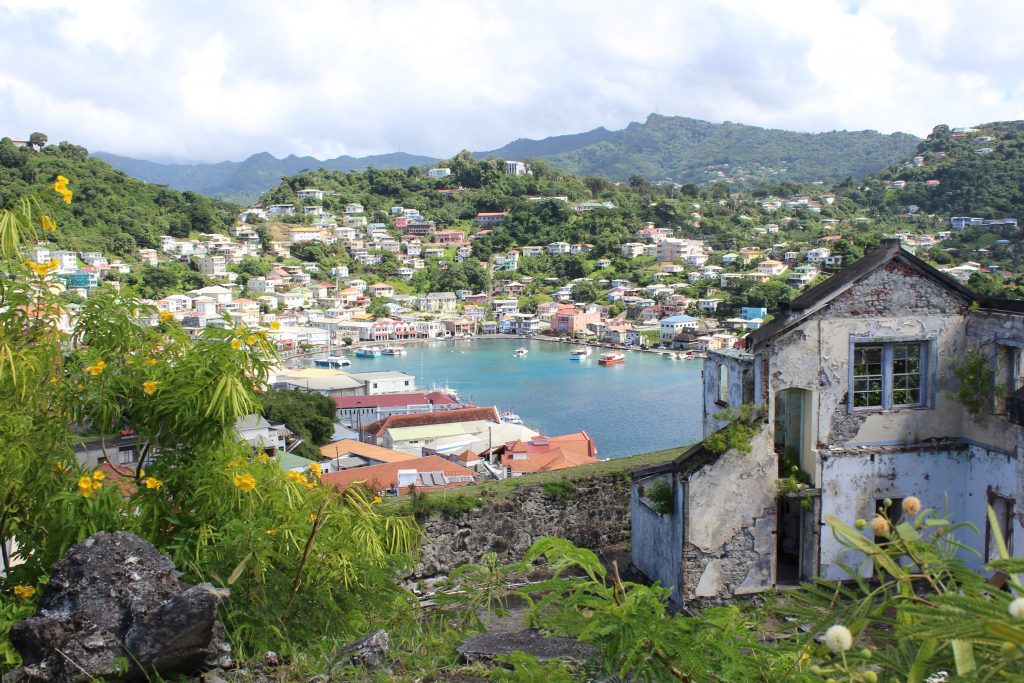 The Carenage in Grenada

We made for that next. 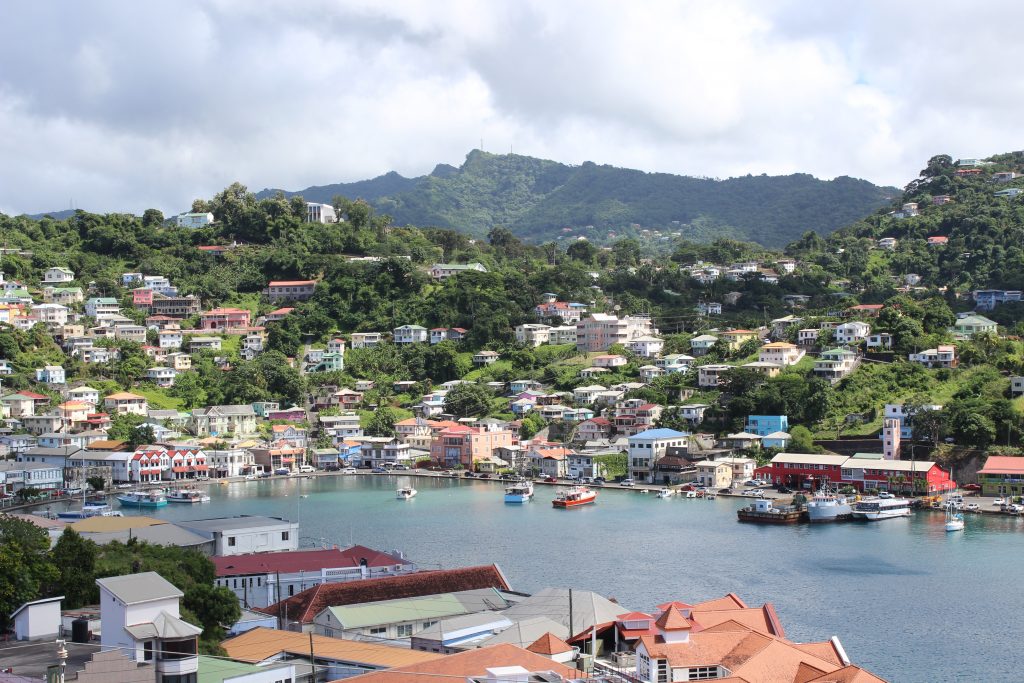 It was disappointing. Not only because there were no shops or restaurants or anything to see, as we expected to, along the waterfront, but also because it was really hot. Half way in, we turned around and decided to make our way back. The harbor was really lovely despite the heat, but there was no activity anywhere. 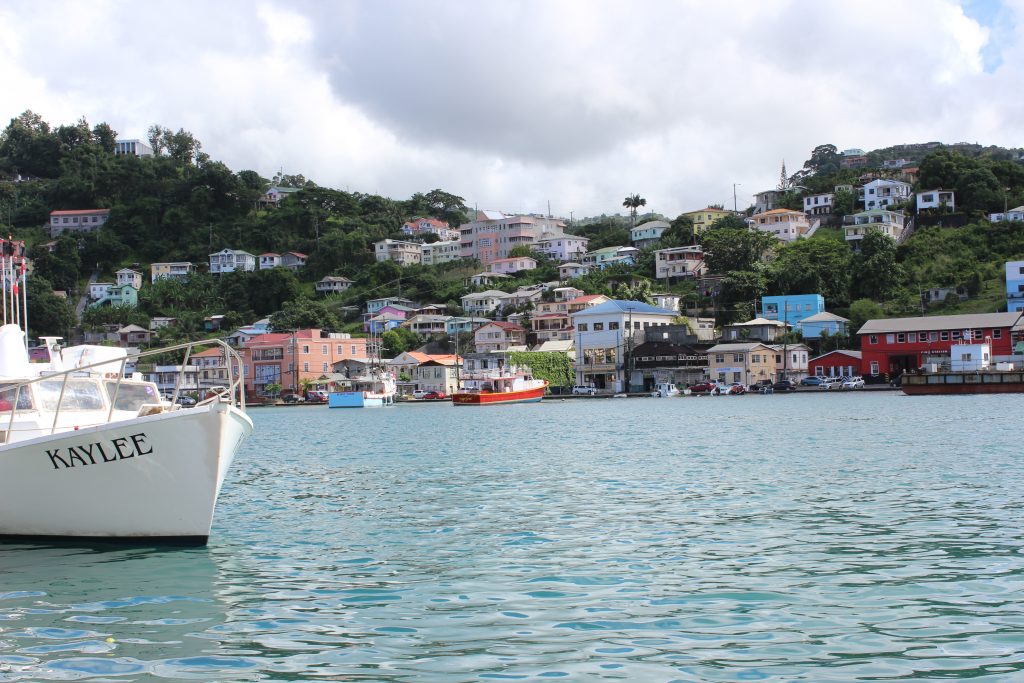 Taking a slightly different way back, we ran in to the favorite part of our day – The House of Chocolate Grenada Museum. We went in, not knowing what to expect, and immediately were welcomed by a young man giving a live demonstration and lecture about chocolate production. We got to taste, grind, and shape chocolate using a variety of tools at his workstation, while learning about the processing that must be done to refine it and get it ready for public sale. 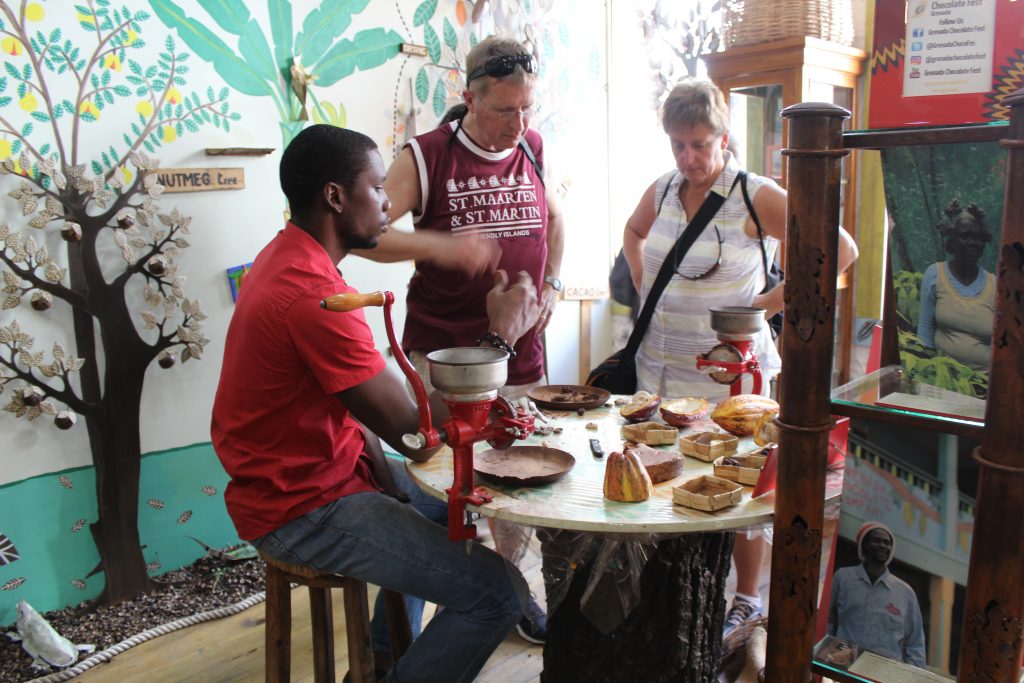 It was quite informative and a good substitute for a few of the chocolate tours we saw offered at several ports of call (and it was free).

Conveniently, after observing the demonstration, the natural flow of the space vectored us to the area where we could purchase chocolate as well as coffee and ice cream from the counter. We picked up a bar of nutmeg and dark chocolate, and also shared a scoop of nutmeg ice cream. We had learned previously in St. Lucia that nutmeg was a common ingredient in rum punch since it was a muscle relaxant. It also doubled as a cheap way to get tourists drunk faster and consume less rum punch – this is why nearly every beach or sail excursion came with free rum punch 😊. The nutmeg ice cream was actually outstanding, and we needed the cold pick-me-up to fuel our hot walk back to the ship.

We were back on board by 2PM and we decided to hang out by the pool and order frozen alcoholic beverages, as one does. We didn’t do much the rest of the night, although we did visit The Grand Cuvee again for dinner, for the third time. Par for the course, I broke the wait staff by asking for a non-standard request. I asked to substitute any other cheese besides Gorgonzola for the blue cheese on one of their specialty salads. A simple request turned in to paragraphs of clarification and conversation, but it did work out. Also par for the course, Brendan ordered the nightly drink special, and two different people had to come by to understand what he wanted and what the drink was (an Old Fashioned, shouldn’t have been rocket science!). As much as we joke about also throwing off the staff with deviations on menu items and edge case requests, we were always impressed with how patient and kind they were, and how hard they worked to please us.

We skipped the show that night (it was another singing performance), opting to read, watch TV, and sleep early. The next day would be an early wake up in preparing for our catamaran cruise in Barbados.