At 3PM I woke up and we headed in to the Old City, Casco Viejo, to look for some art, some Panama Hats (made in Ecuador), and eventually grab some dinner.

Casco Viejo was really lovely – I would have enjoyed it much more had I been feeling 100%. 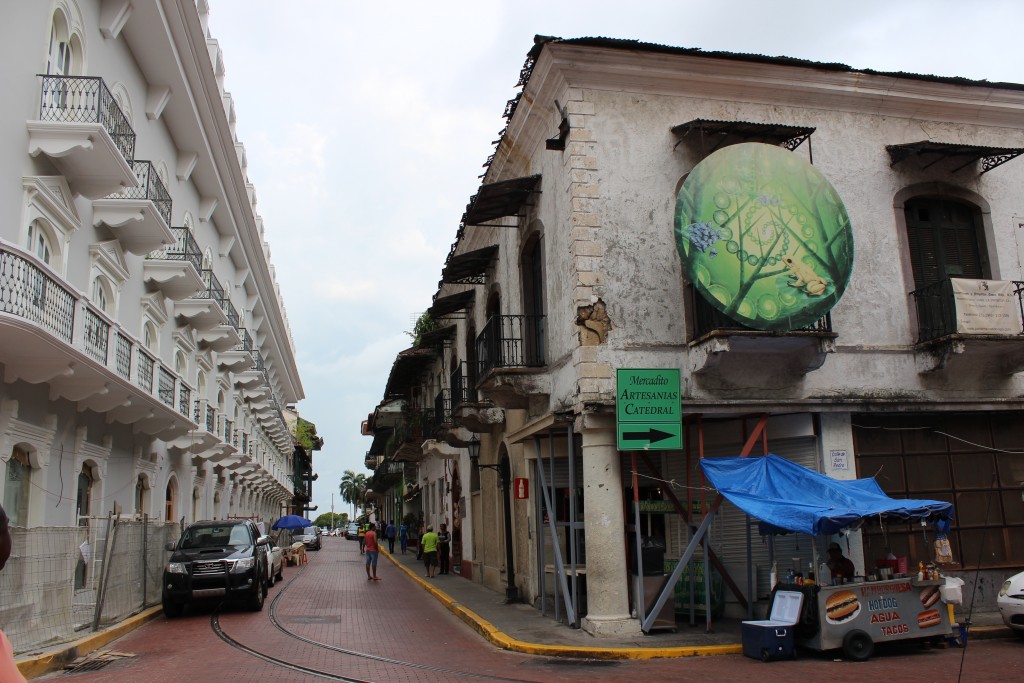 Cobblestone streets, old 17th/18th century Spanish buildings that had been restored (similar to the feel in Havana, but in much better condition), little craft stores and galleries, as well as your standard tourist trap junk at every turn. 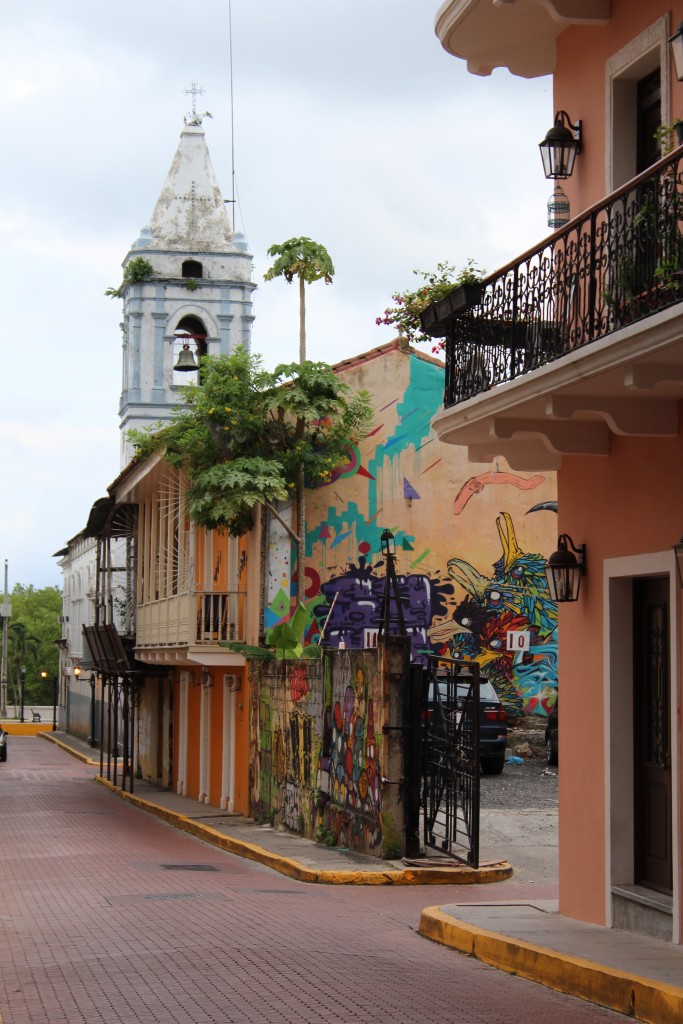 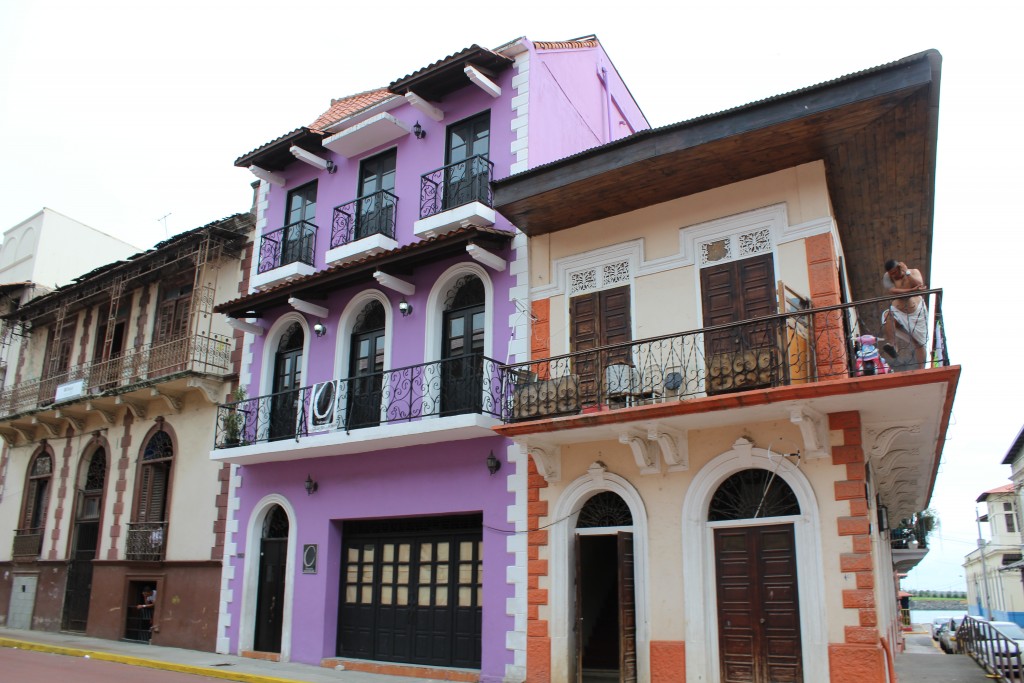 We stopped for a mojito (well, Dave did) at a little mojito kiosk, and again were shocked by the prices. 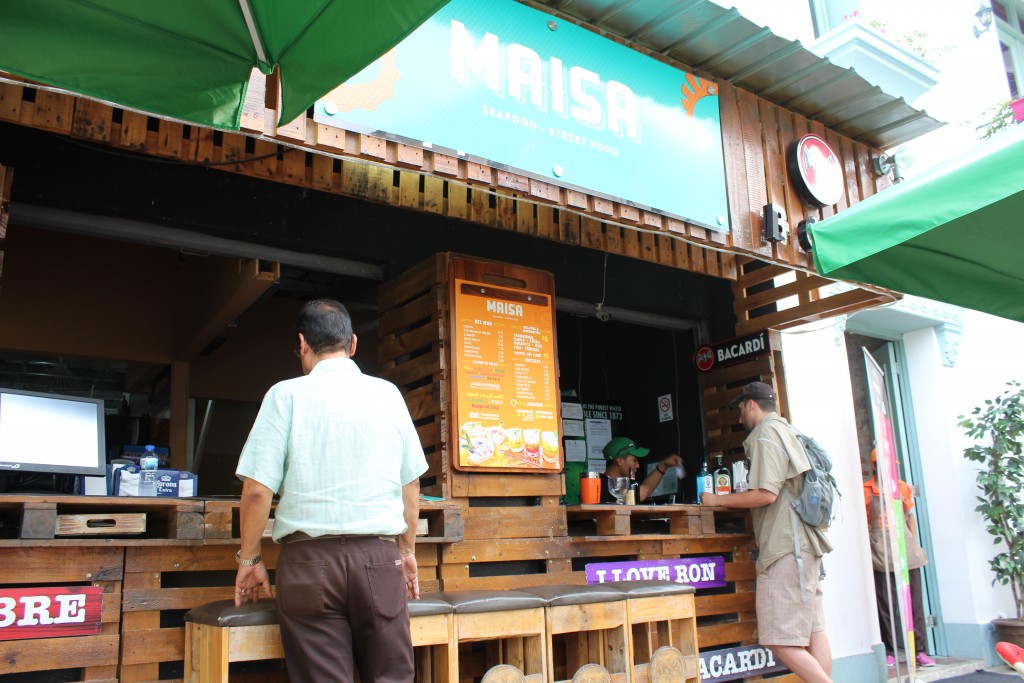 Casco Viejo also offered beautiful views of the downtown, and the Ancon Mountain (the highest point in the city). 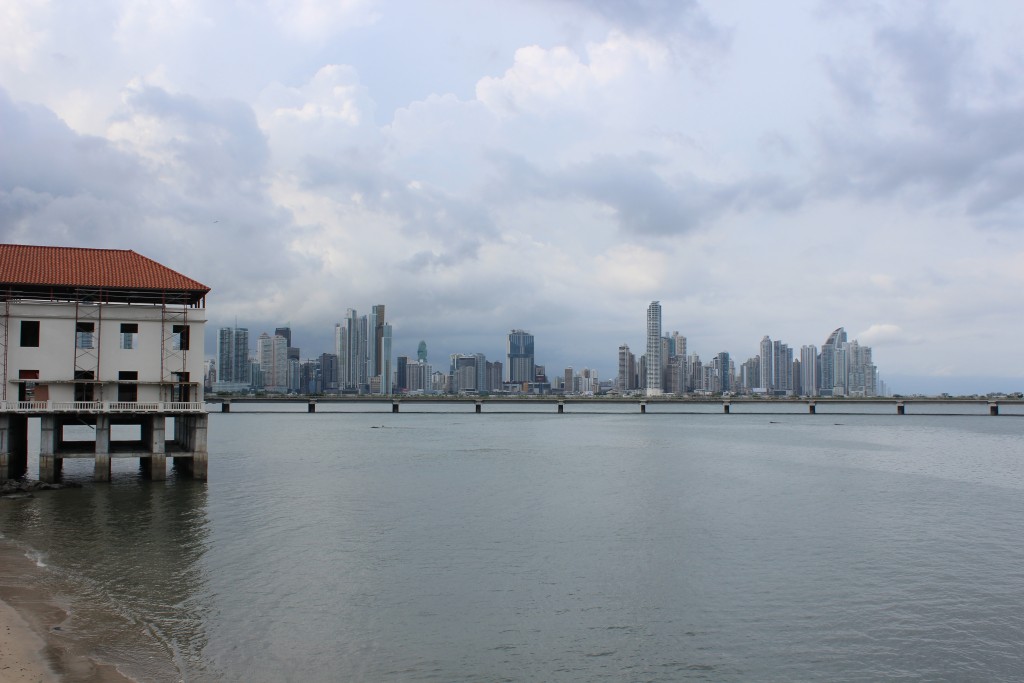 It would have been nice to take a guided walking tour, but instead we opted to do our own thing. All landmarks and monuments were conveniently labeled in English, making self-guiding easy. 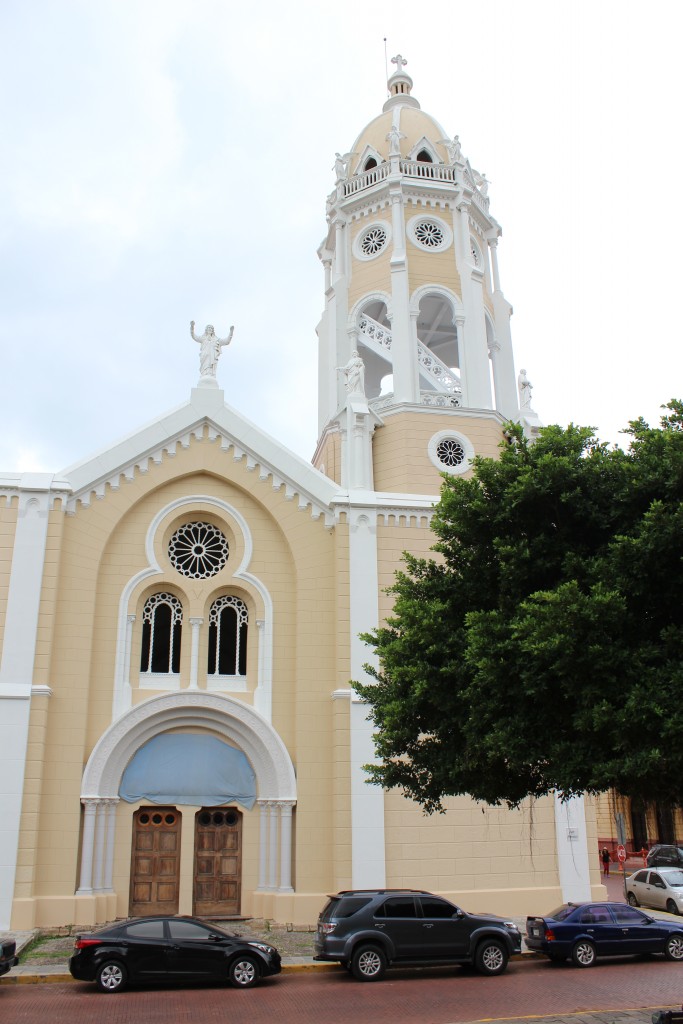 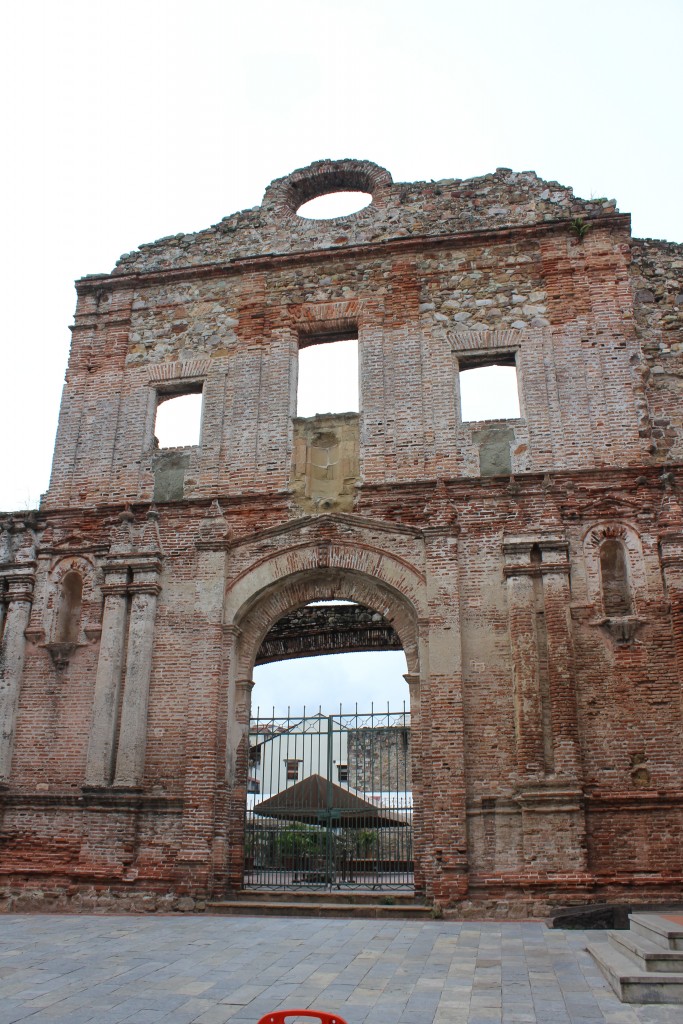 We had scoped out several hat stores, and eventually I found a hat I liked. There were 3 prices offered – cheap ($25), medium ($130), and expensive ($500). We kept asking around to try to understand the differences, and it seemed to all come down to the weave and the material. We didn’t quite understand why the medium price wasn’t more like $60, because it only seemed marginally better. Nevertheless, that’s the one I ended up going for – Dave also bought a hat so we were able to negotiate two for $130.

We hit the North edge of the Casco Viejo and the neighborhood started to turn just like that – it was similar to the separation of the Old Town in Havana to the rest of the city. 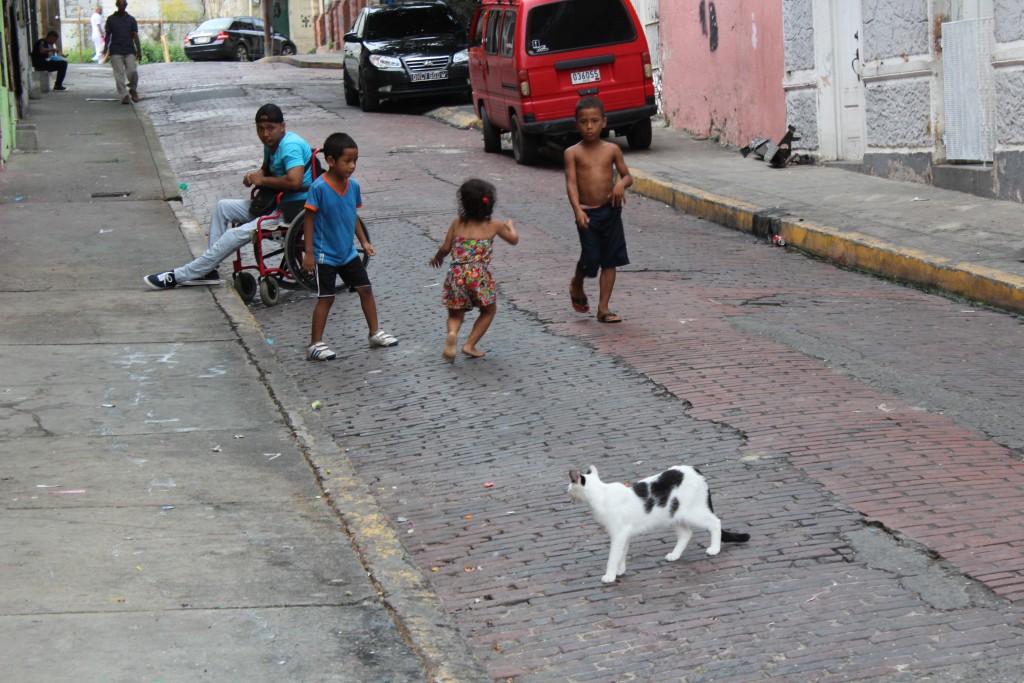 We stopped for a drink on the water at a swanky lounge and Dave had some more Abuelo’s Anejo rum (12 years aged) – one of the local rums. I was sipping gingerly on a Gingerale. We discovered the mixing the Gingerale with the rum was delicious. 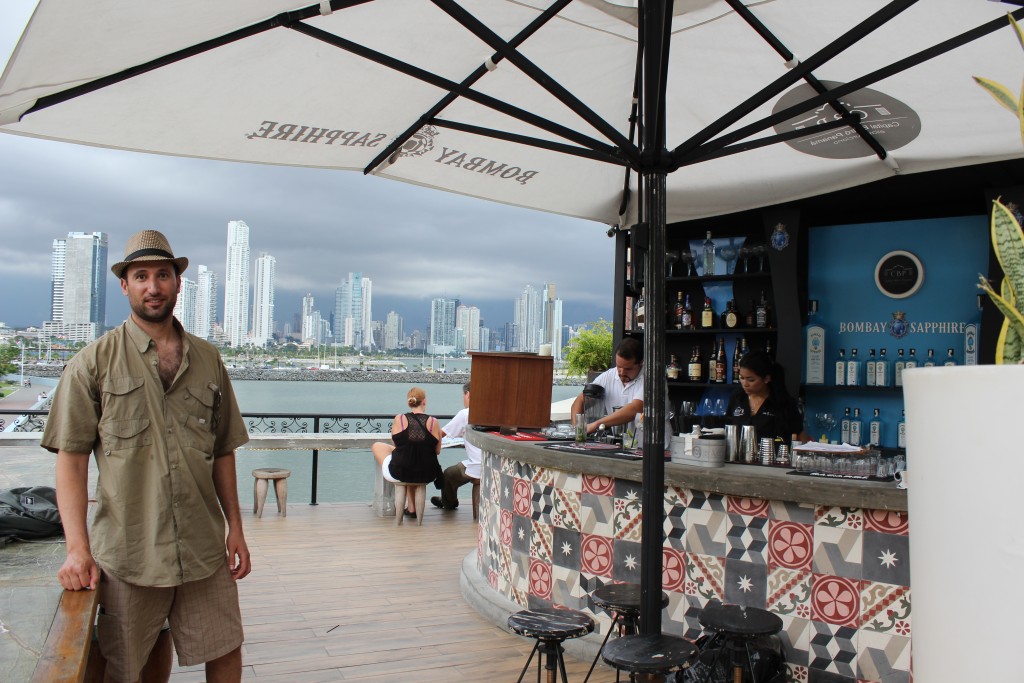 There was a lightning storm breaking over the downtown that never came our way, but did offer a fabulous light and sound display against the city skyline. 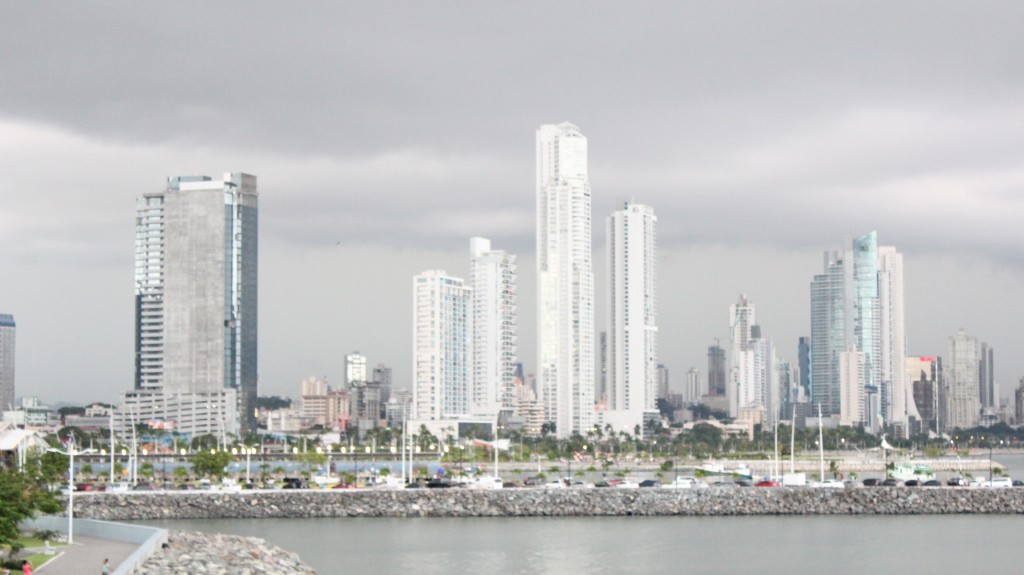 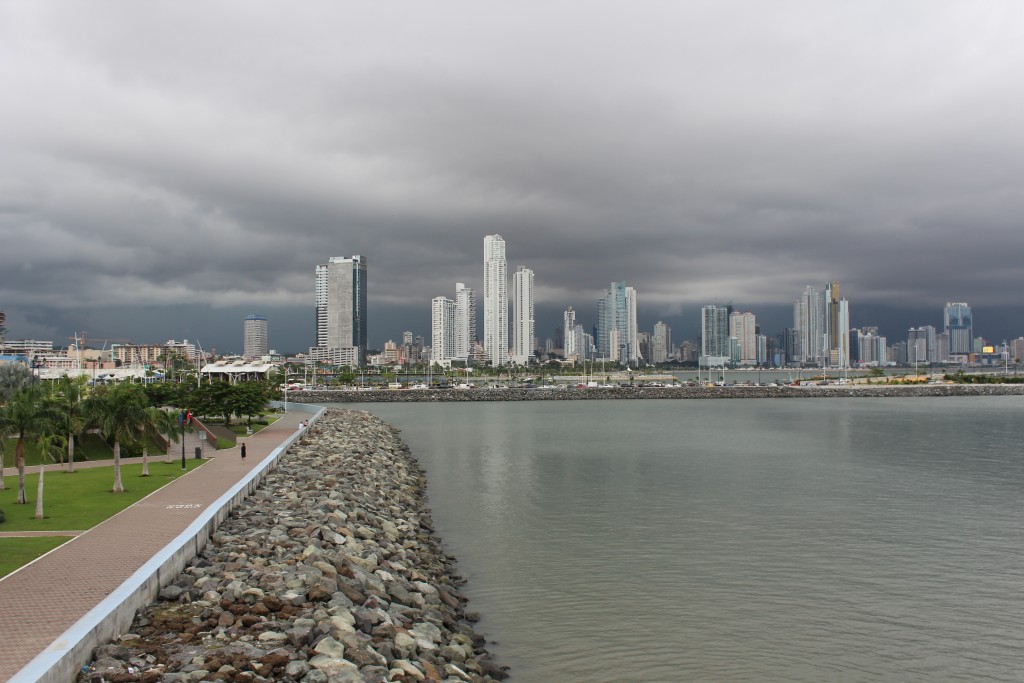 Here’s some video we captured:

After that, we looked for a gift for Dave’s grandmother, as well as art. We found some really nice galleries, and even met a hipster American that designed one of the galleries and seemed a little annoyed to be talking to us. He was helpful in that he gave us directions to four other galleries, only two of which were open, on the other side of the square: 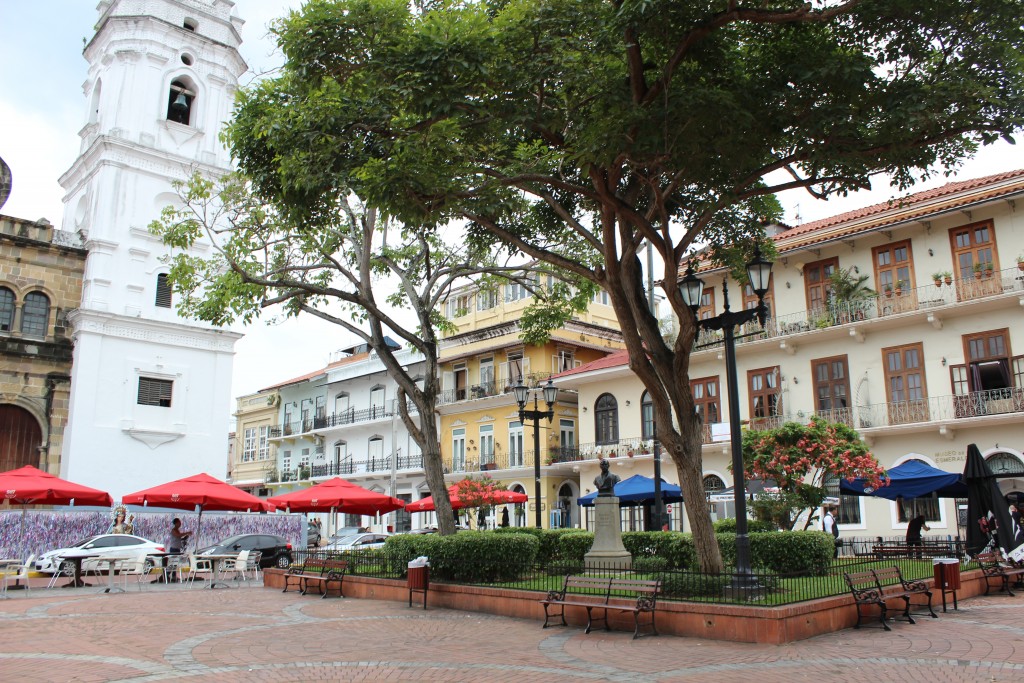 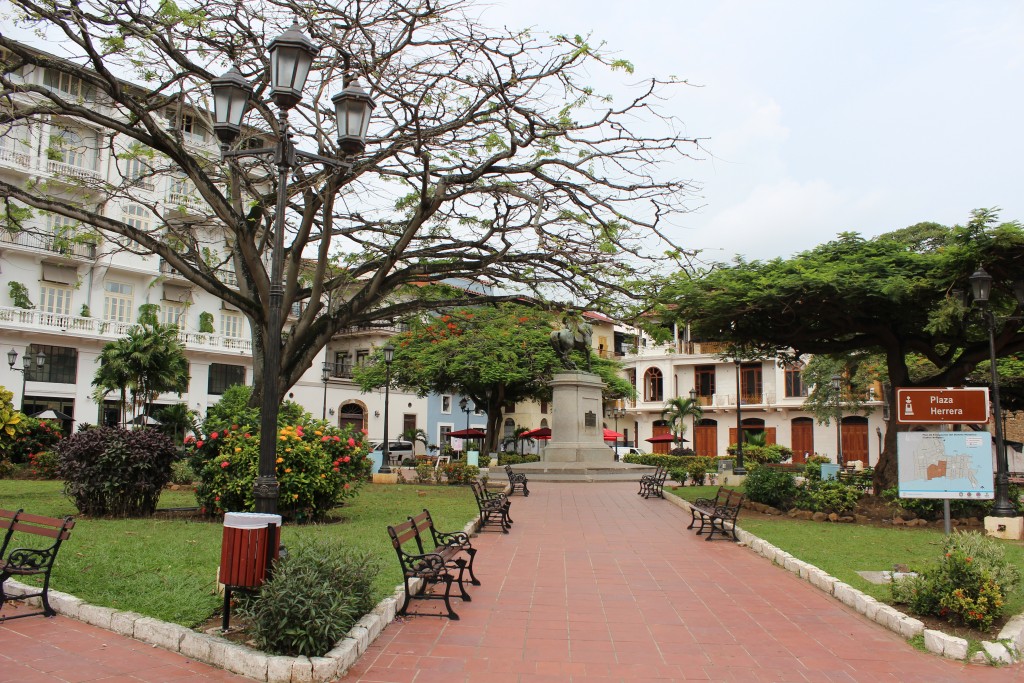 We never did find anything we just had to have, and the prices were steep anyways. We decided to pack it in and make for dinner. On the way to dinner we saw this awesome sign (side note: I knew there was a reason I loved cake): 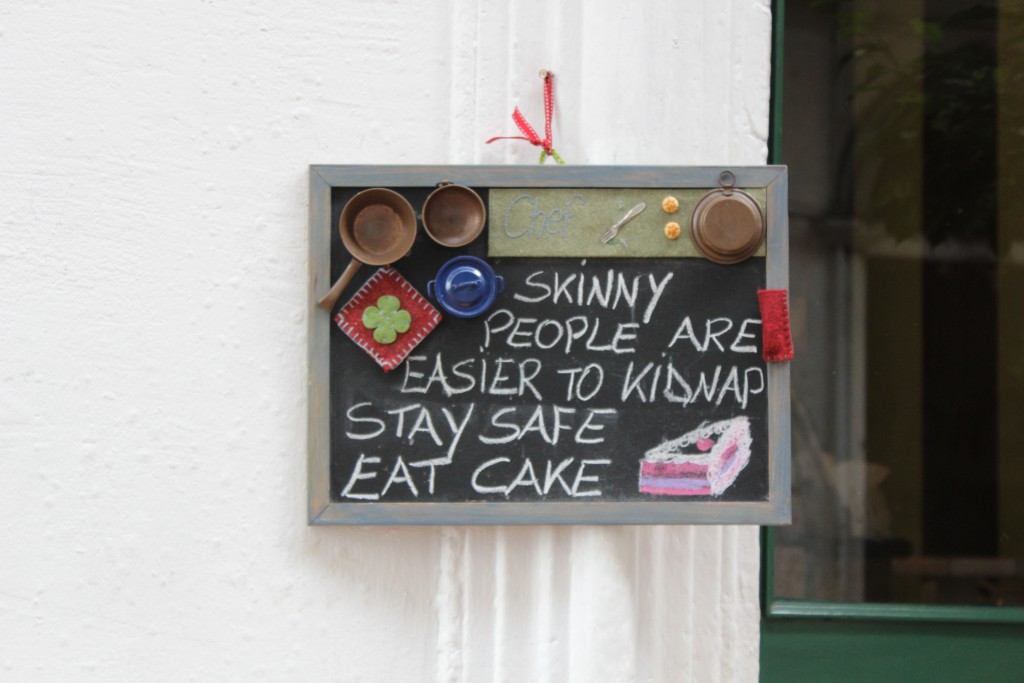 Our taxi driver had recommended a Panamanian restaurant called Diablicos (Diabolical) that was located next to the police station on Street 7 (the streets were basically laid out in a grid, and we had an awesome map that the hipster American had given us). It was a touristy restaurant for sure, catering to foreigners like us who wanted to try Panamanian food – but it turned out to be great. 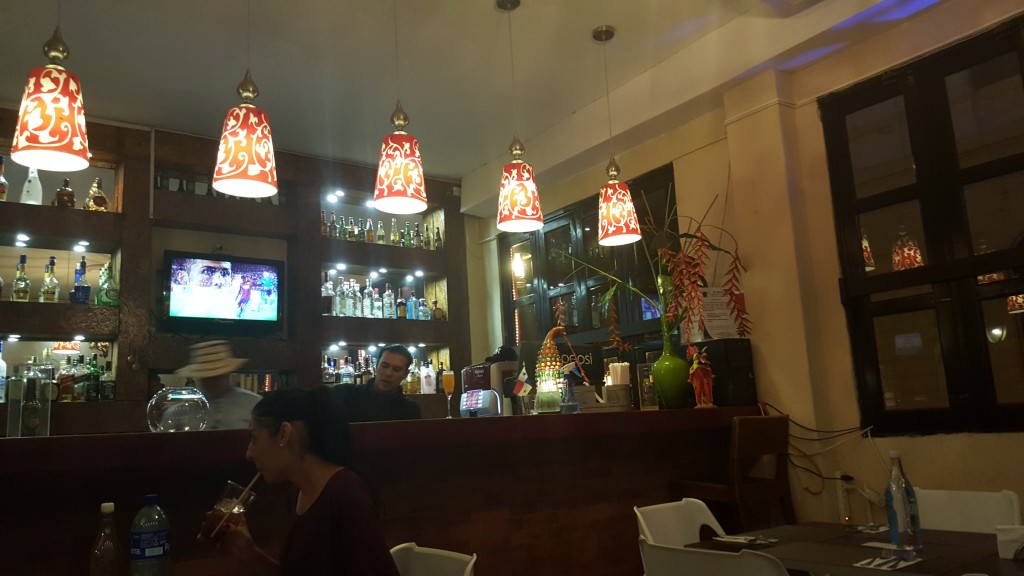 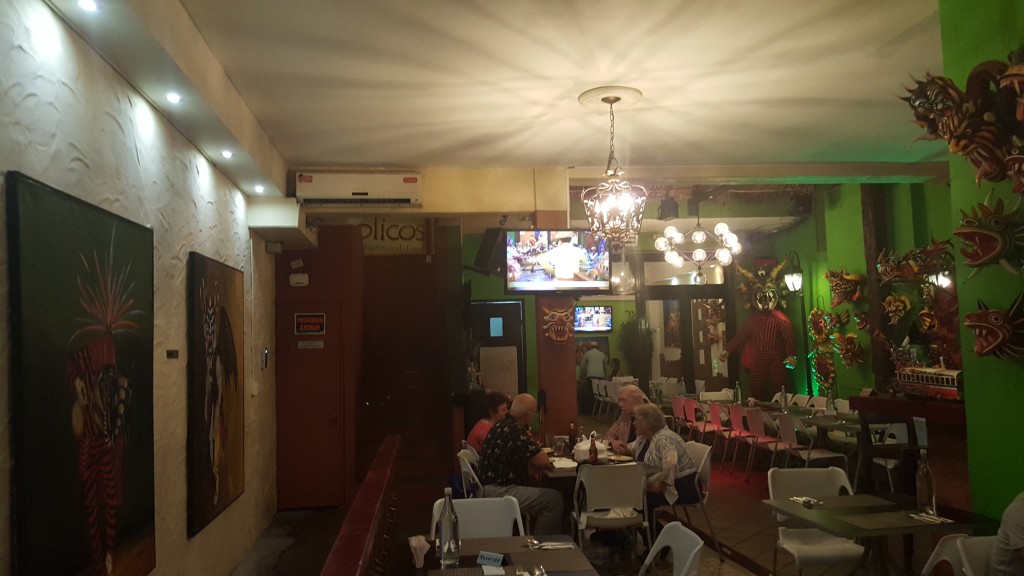 I ordered the chicken soup which was awesome, and we shared the Ropa Vieja (shredded beef). 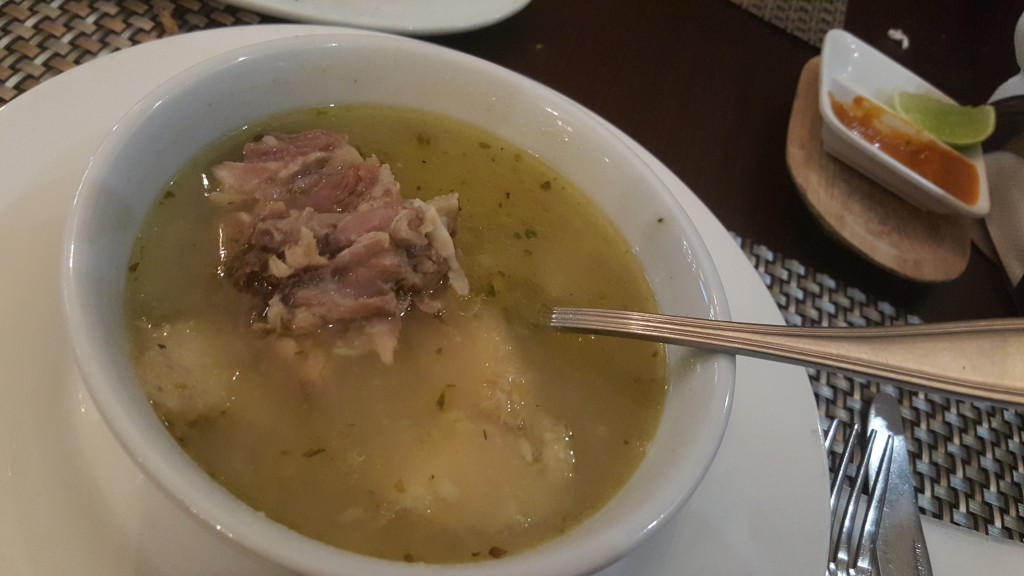 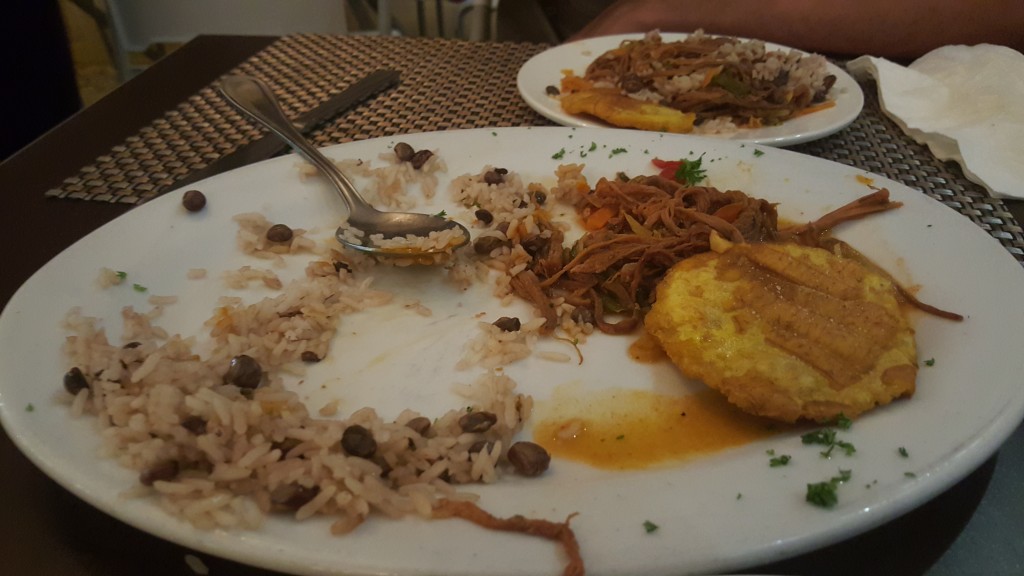 Definitely skip the fried calamari – that just wasn’t very good. We also happened to LOVE the hot sauce the waiter brought to us, and asked to buy some. He said it wasn’t for sale, and that the restaurant made it in-house. We tried to get across the idea that we would buy some, but he ended up giving a bottle to us for free! After desert (Tres Leches and Coconut Flan, of which the Tres Leches was better) we headed out.

Unfortunately we were just too tired (and I still wasn’t feeling great) to stick around because there was going to be some music and dancing performances starting soon. We asked around and people don’t eat until 9 or 10PM in Panama City, which was why everything was dead when we were eating at 630PM.

We went to bed around 1030PM and slept for 9 solid hours. We made it for breakfast again in the morning around 9AM (it closed at 10AM), and luckily I was getting more of an appetite.

Our taxi came to whisk us away to the PTY Airport at 1030AM, and by 1230 we were flying out of Panama City and back to Miami. The trip was finally at an end, and now we just had to survive the annoying traveling back part.