Today was a day for adventure south of Muscat, starting with a sinkhole, then a hike and swim in a wadi, and ending in Sur for dinner and turtle spotting. We started at 9AM from the Best Western Premier Muscat hotel in the commercial center of Muscat. Since I wanted to sleep as long as possible, I missed breakfast. Sulaiman was nice enough to stop to get us Omani tea (black with milk, yum!) and some more Omani bread with honey to share on the way.

After about an hour drive south of Muscat back over the mountains past where we were the previous night for the Muscat Festival, we hit the Bimmah Sinkhole (Hiwayat) on the inland highway, near to the village of Tiwi. Here is the map: 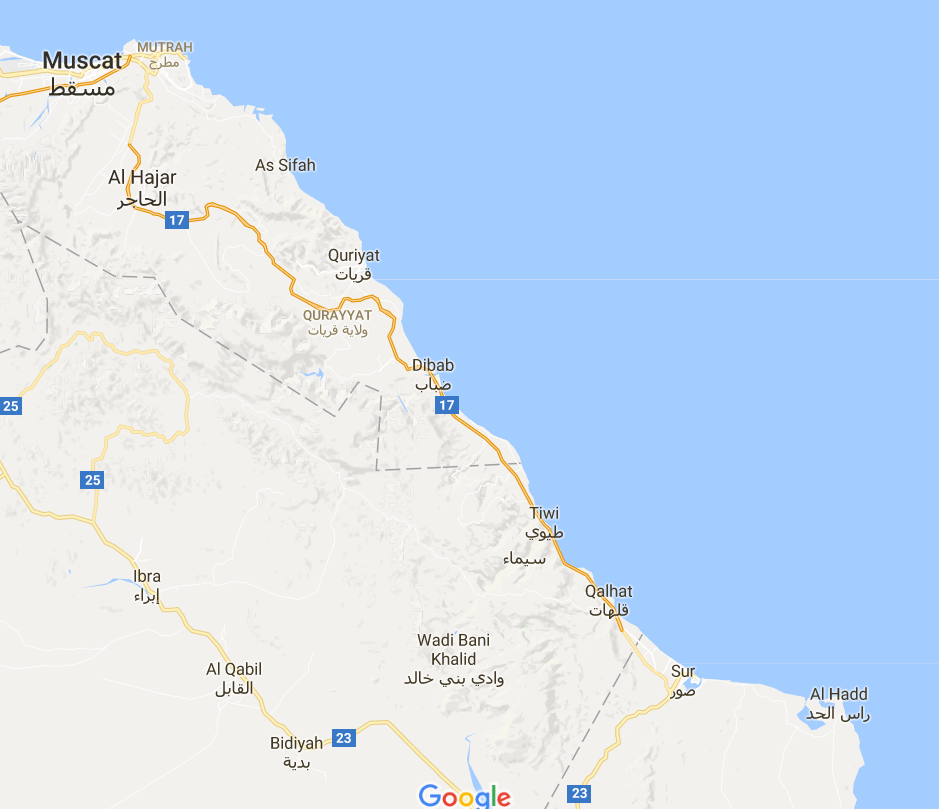 The local story is the sinkhole formed when the earth swallowed a star. There were several Omani families visiting and a few people, both Arab and non-Arab, swimming in the sinkhole, which was easily accessible through a staircase towards the southeast side. The water was a nice teal and aquamarine, and very clear. In the rainy season, Sulaiman mentioned it could fill up even more and even become clearer when the rains subside for a few days. 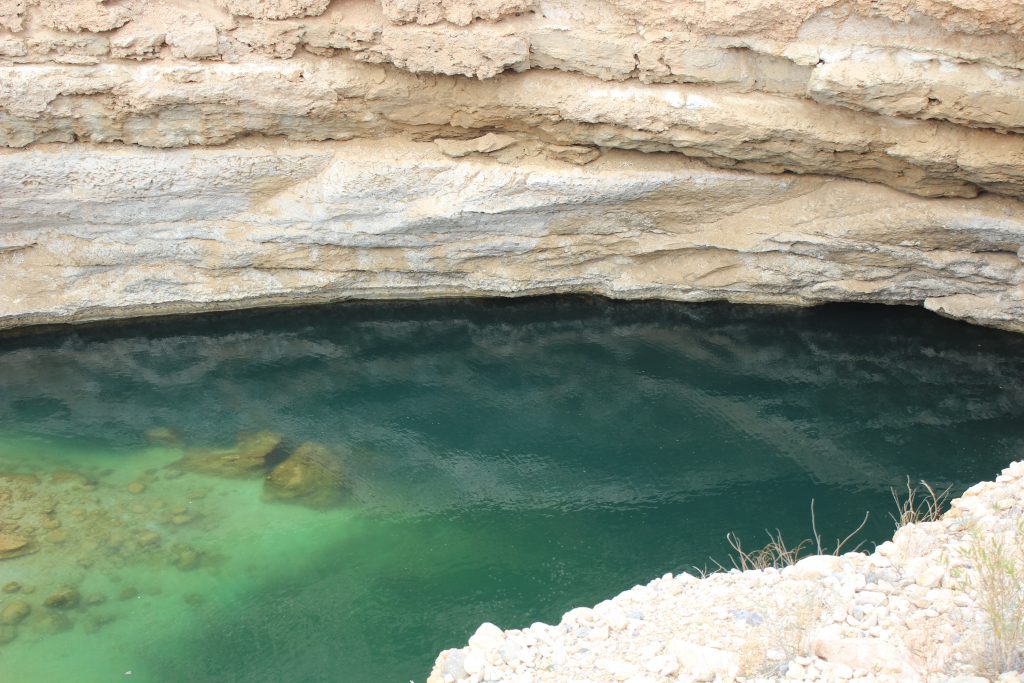 After using the toilet at the sinkhole (there seem to be free public toilets available throughout the country, but they are “squat only”), we continued south of Muscat to the town of Tiwi for a traditional Omani lunch around noon. Tiwi we think is a variation on the word Tawi, or whale, in Arabic, which kind of makes sense since it is on the sea. The roadside restaurant we stopped at served a quick and delicious dahl and Omani bread (which was like an Indian paratha), accompanied by nice cut carrots, cucumber, and onions. Followed of course by more Omani tea.

After eating, and when Sulaiman went inside to wash, a random Omani came over a chatted with me. A few basic sentences were exchanges, and when Sulaiman returned he ignored us again. Apparently he was a pickup artist and it was all a scheme that Sulaiman had witnessed many a time 🙂

Onward south of Muscat and just beyond Tiwi, we came to Wadi Shab. I was in for a 45-minute hike in and then the decision point of whether I would want to swim (I was honestly a little hesitant due to the whole modesty problem for females in this part of the world). I could take that decision later – let’s start off with a small boat ride to the other side of the wadi river to get to the hiking area:

After the boat ride, we set out to hike. We passed ancient ruins of villages as well as active date farms, and a few locals living and working along the way. We also passed many Omanis taking family time or time to explore and swim in the Wadi. They were mostly male, or children. The women typically stayed ashore in full dress and watched. 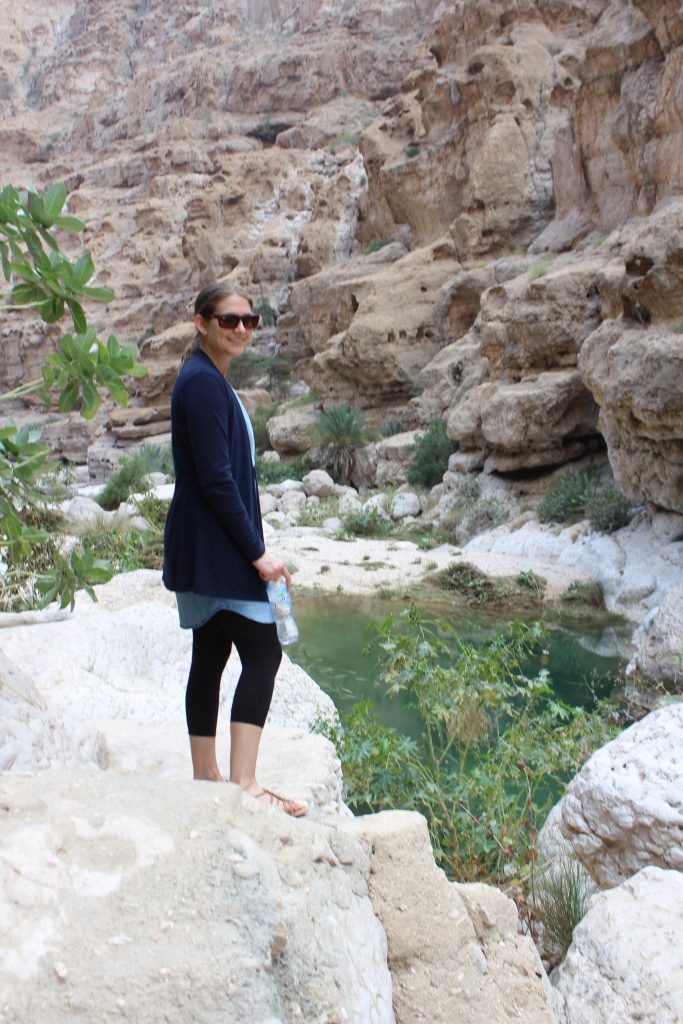 After a certain point, Sulaiman explained that the locals did not venture beyond since it was made a place for the foreign swimmers who wanted to disrobe and feel more comfortable. I expressed concern that foreigners were taking away from the local experience, and he mentioned that there many more wadis that were just as good that were pretty much “local only.” The locals in any case didn’t seem to mind and were glad to have tourists visiting their country.

The hike got tougher as we winded our way through rocks, having to do a good bit of scrambling and jumping along the way. I had on some dress sandals and they actually did pretty good. Sulaiman of course had on some basic flip flops and was schooling me like a boss. My ankle was doing great despite two surgeries over the past three years.

At the end, we were rewarded with a beautiful, pristine wadi which I sat at the edge of with my feet dangling in to the water, deciding whether to jump in. 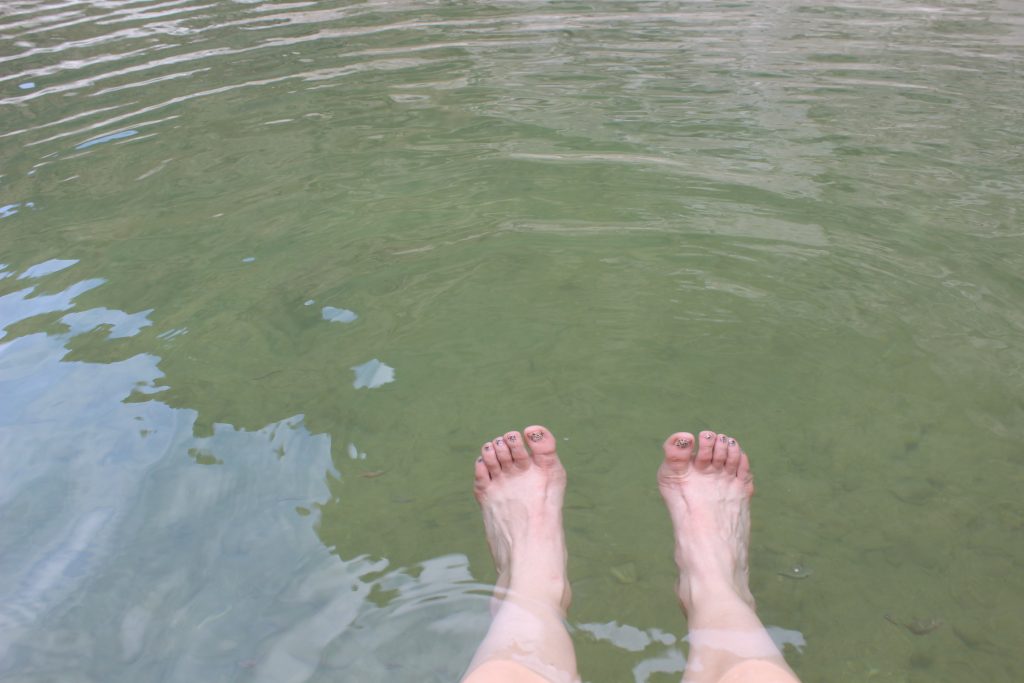 Looking around and seeing only foreigners (and Sulaiman, who graciously pretended to look the other way while I disrobed), I took off my outer layers down to my (modest by Western standards) one-piece swimsuit I was wearing underneath and dove in.

It was so worth it. The water was perfect. The sun wasn’t too direct. Very few people were around so it was quiet. Sulaiman led the way and we swam 50 meters, then walked between two water pools on rough stones barefoot (ouch!), then swam for another 20 meters, and then squeezed through a narrow opening and came out by a waterfall. We again were able to continue to squeeze against the wall around the waterfall, and ended up behind the waterfall in a cave. When we came back out, we found some brave people coming down the waterfall via a rope that tied for those wanting to have a jump. I was not so brave. Unfortunately, I had to leave my camera behind for all of this, but the memories will be filed away forever.

Back through the pools and the rocks, our clothing and belongings were still waiting for us untouched. Most of the people we saw along the way were foreigners – Sulaiman was correct. The locals didn’t seem to bother with this portion of the wadi. Good thing too – because I was a hot mess trying to put on my tights and dress OVER my wet bathing suit, while trying to get a dry sports bra under it so that I could then peel the top part of the one-piece suit down. No towels and this part was really awful. Now I understand why women just jump in fully covered and then deal with being soaked at the other end.

After the pleasant 45-minute walk (it seemed way shorter and more pleasant returning, possibly because we were cooled off by the water!), a 5-minute boat ride, and a pleasant chat about curse words in foreign languages later (including a demonstration by an Austrian female backpacker we met along the way), we found ourselves back at the car. There was a random fort on the top the hill above the car that I really enjoyed. 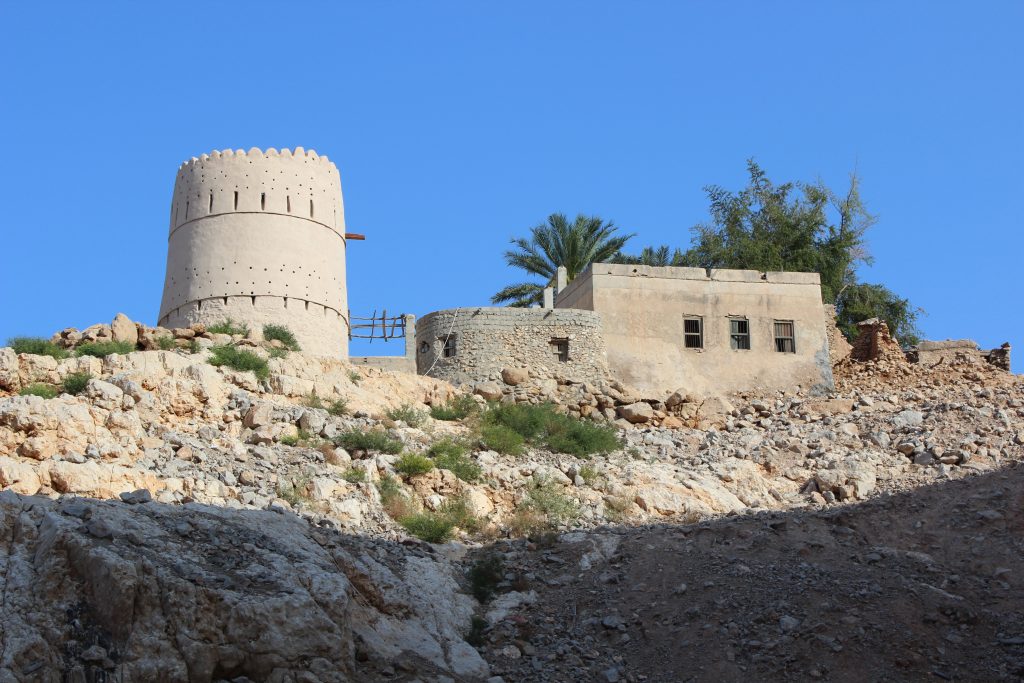 We drove for a bit to a nearby mosque for Sulaiman to pray while I surfed his Wi-Fi in the car, and then continued our south of Muscat drive to end the day in Sur.

Sulaiman got me situated at the 3-star Sur Beach Holiday Resort with a sea balcony view and gave me a few hours to shower and unwind.

Check out this view! 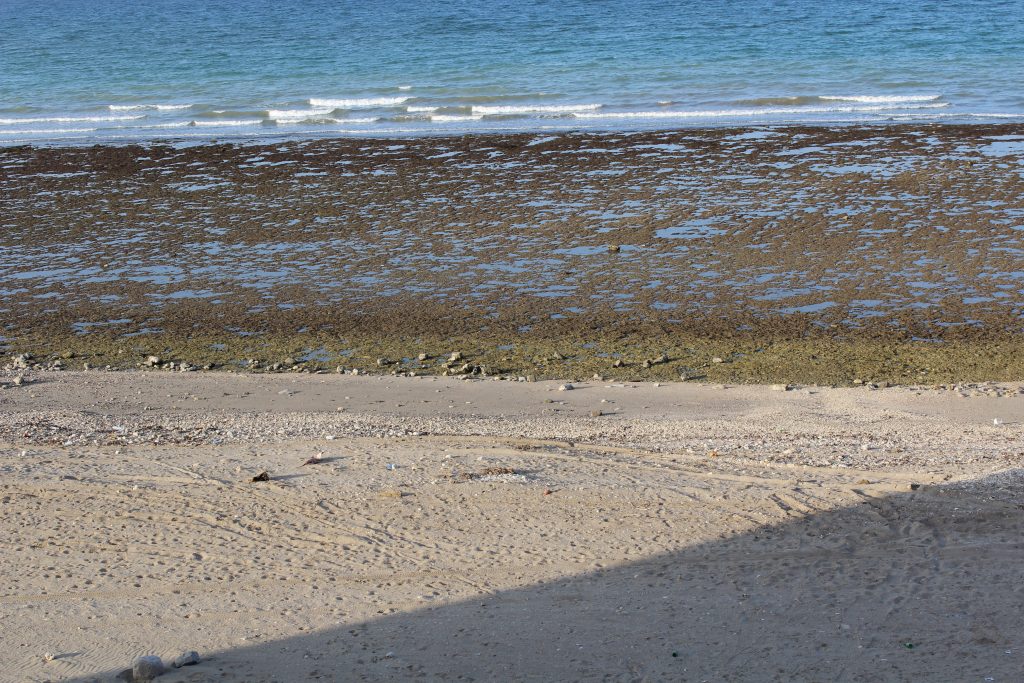 We met again at 630PM to head to dinner. On the way I tried to get to another Bank of Muscat ATM but it didn’t work out – I did call Chase later to enquire and they said I was good to go and that it was a problem with the ATM (it worked the following day at a different ATM). Note to self also for next time – increase my withdrawal limit to $1000 US (since it was $500 a day, I had to withdraw several times, leading to more cash withdrawal ATM fees). 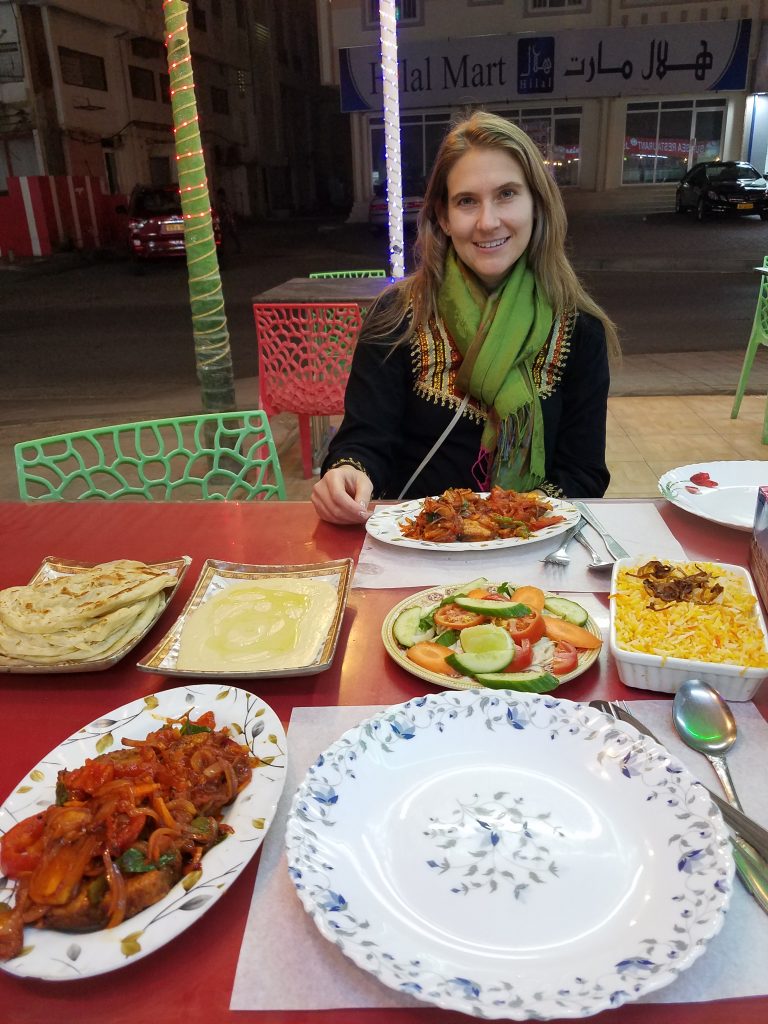 We ate dinner at a seafood restaurant. The fish of the day was a kingfish, but we both opted for tuna, which was lightly fried in a tomato sauce with some vegetables and spices. We also had hummus with paratha again, multi-colored biryani (similar to the rice Brice and I had in Bahrain), and a nice salad of tomatoes, cucumbers, carrots, and onions. We finished with papaya smoothies and then Omani tea.

After dinner, at around 830PM, we drove further south of Muscat and Sur to the turtle reserve to see if we could see any giant sea turtles on the beach. This was not the right time of year to see the turtles laying their eggs (July), but occasionally if one was lucky, a turtle could be spotted whilst looking for a different spot on the beach to re-enter the water. After a 30-minute drive and some coordinating with Sulaiman’s friend was an adventure guide and turtle spotter, we were led to a 70 year-old giant female who was breathing heavy and belaboring to get back in to the water. She had a piece of bet caught around her fin, which we removed to help her on her way. The whole beach was completely dark and the Omanis and the government took these turtles seriously – it was a completely protected area and lights were also prohibited (apparently the turtles respond and move towards the light). Our guides occasionally shined a light to help the turtle find the ocean (and incidentally helped us take a few pictures without a flash). The benefit of a no light beach is that you could hear the waves and see the stars perfectly simultaneously. All I can say is “wow”. 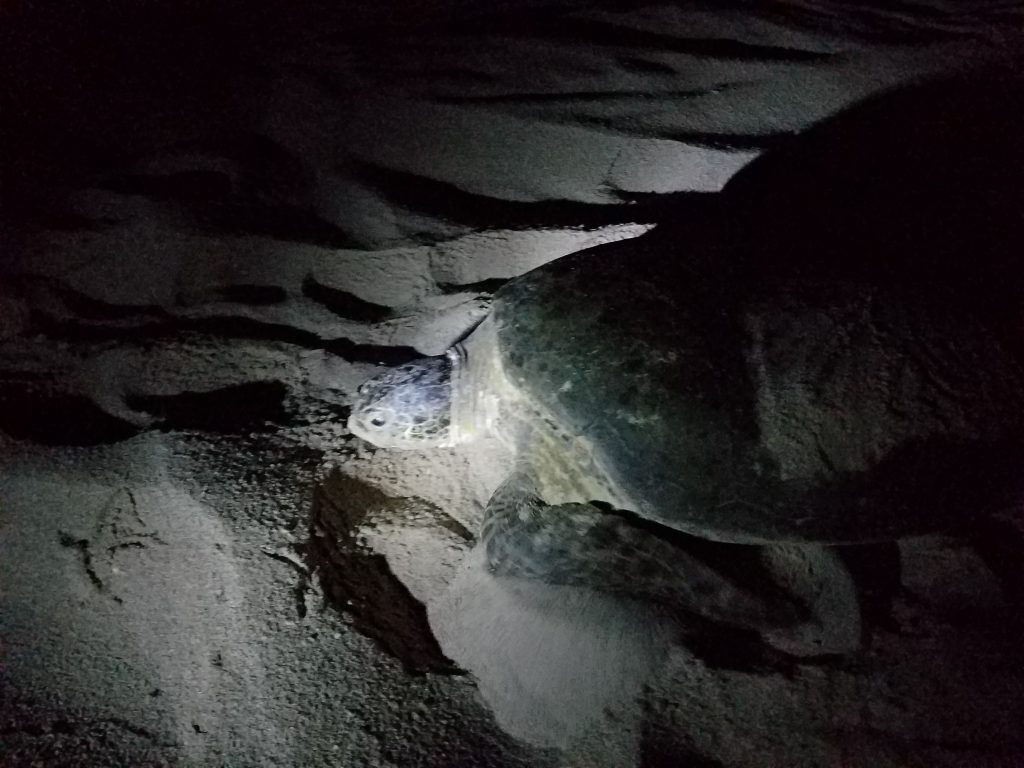 To top it off, Sulaiman’s friend brought out two baby turtles they were nursing back at the nature center and I got to hold them. I had no idea the whole experience of being south of Muscat would be even better than Muscat itself. Oman is a fabulous country.