On my third full day in Bahrain, the theme was decidedly Muharraq – the district connected to Manama by bridge that contained the airport. Brice had to work a few hours in the morning so he met me and we headed out for the day around noon. We decided to plan several Muharraq adventures throughout the day, starting with walking through the old city and visiting several old houses. The first was the Sheikh Isa bin Ali house – build in the early 19th century and home to his family for about 100 years. It was a traditional house with thick walls, inner courtyards, and many many inner rooms for the family, guests, and servants. 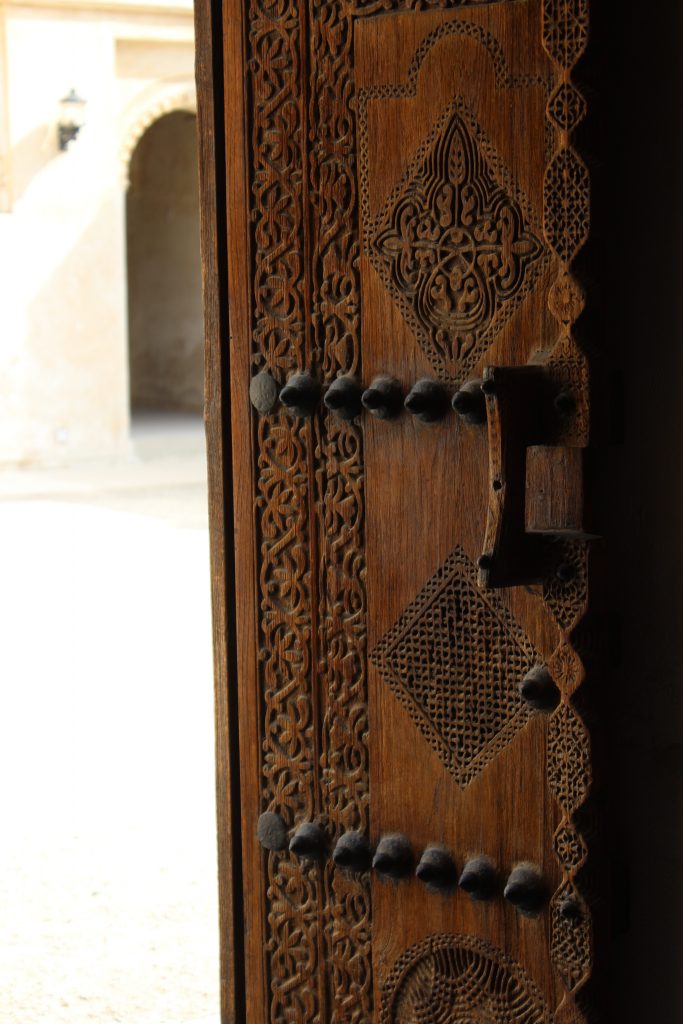 The decor was simple, and we could imagine where tapestries, mosaics, and artifacts might have been used as adornment in centuries past. That said, much of the detailed stone work and architectural detail had already deteriorated. 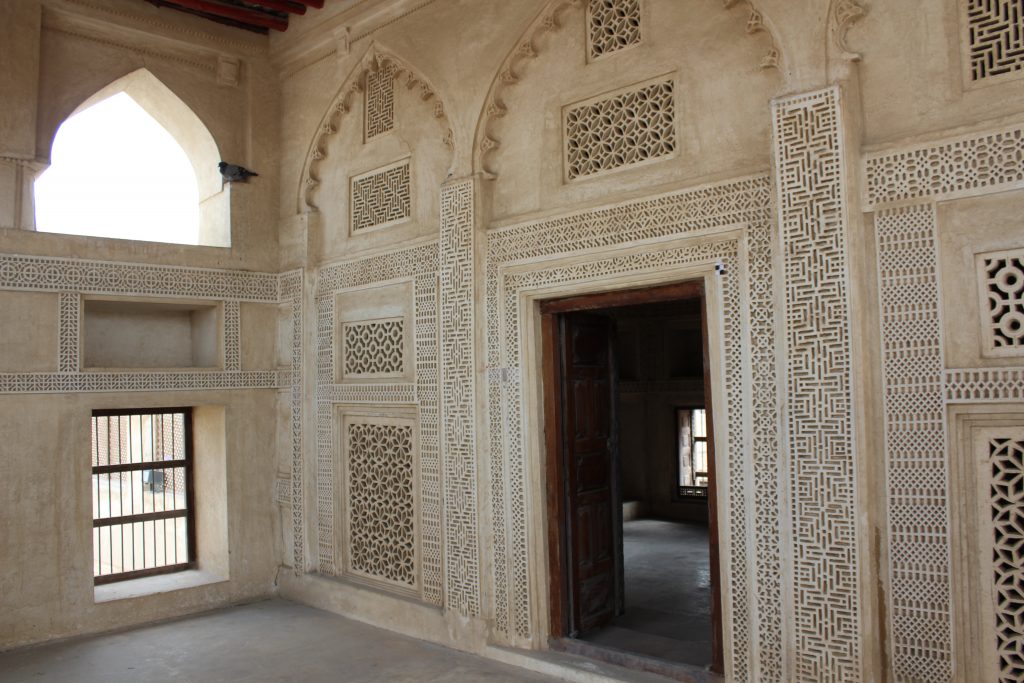 Of all the rooms, I liked the courtyards the best, and pictured shade trees and flowers to make the space green and comfortable. The other neat thing to see was the wind tower, which we had read about at the Bahrain National Museum as a way to naturally cool and allow air flow through traditional houses. 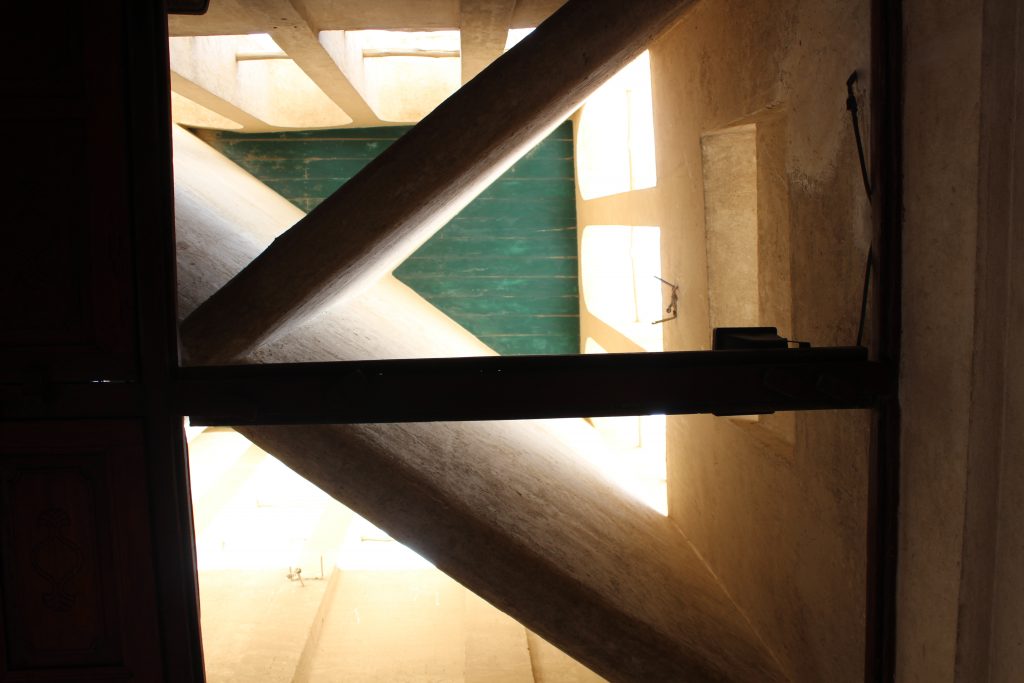 I remember Tarek had explained similar systems in Egypt, although less to do with tower and more to do with positioning of windows and shapes of the openings. Speaking of Tarek, I had invited him on this trip, but he wasn’t able to obtain the visas easily as a Egyptian national – apparently the Gulf countries viewed Egyptians with the same disdain and prejudice that Americans viewed the Mexicans. So it wasn’t easy to obtain a tourist visa to visit, even though the economies certainly relied on guest workers. In fact, it seemed all mercantile industry in Bahrain was staffed by Indians or Bengalis. Certainly all the Uber drivers spoke Hindi or Urdu.

We spent an hour or so walking around the house, but there weren’t good guides or information about what we were looking at – except for the map at the beginning and the occasional label indicating which section we were in. There were some nice vantage points of the surrounding area though as well. 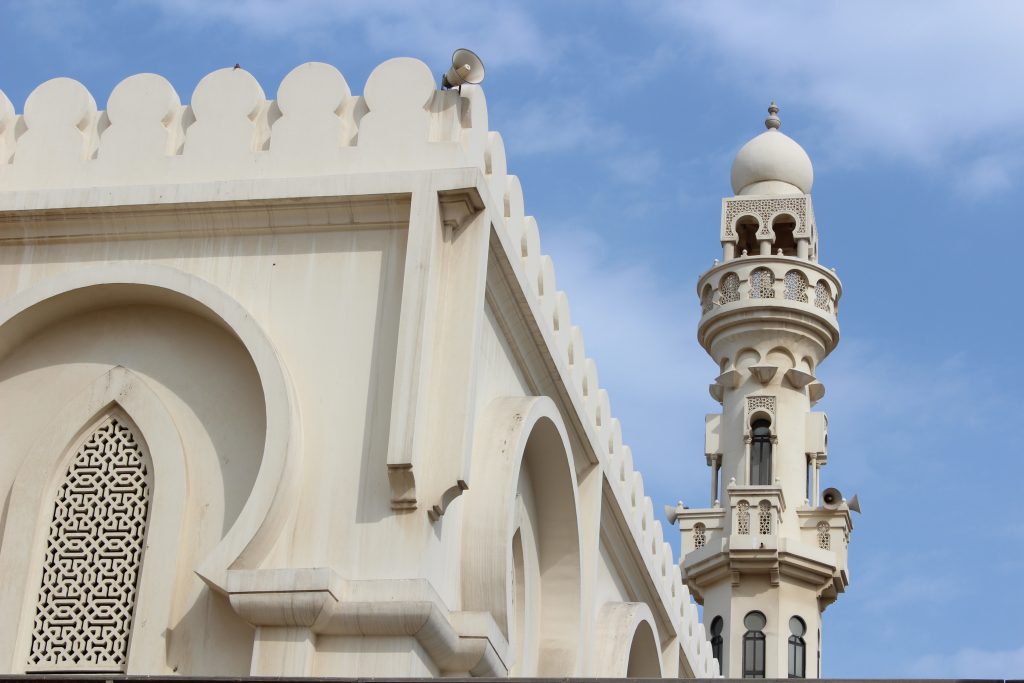 Afterwards, we began to wander around and soon discovered that everything was closed between 1 and 4PM, so we had some time to kill. We continued to quest for my jasmine perfume but the few vendors that were open didn’t stock exactly what I was looking for – the sweet jasmine oil – or was offering it in ornate bottles at too high a price. So, we decided to stop for lunch.

We found a random courtyard off the main street of the Suq and had another Muharraq adventure. First, we were welcomed to a small restaurant tucked in to the side of the courtyard, where a few (apparently locals) were enjoying food and tea. 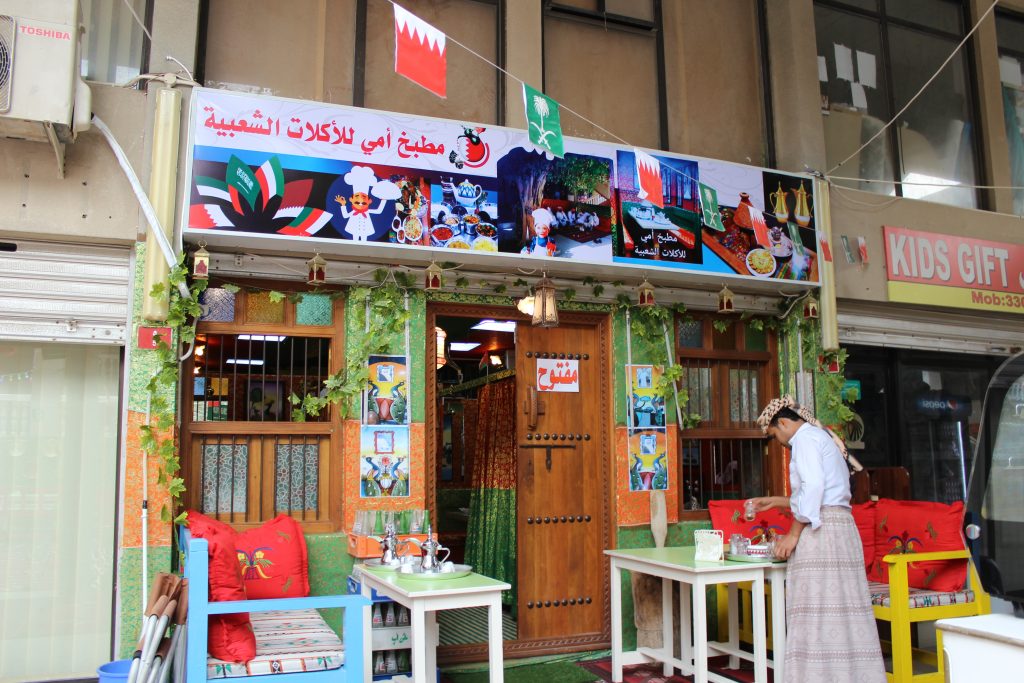 We decided it looked good, and were immediately greeted by an woman who quite obviously ran the joint – we later found out she was Egyptian (from Mohandiseen). We sat in the front of the restaurant to get good people watching, and ordered a whole Bahrainian chicken prepared in a what seemed like a tagine for us to share, with potatoes and other vegetables cooked beside it. Fresh bread was brought to us by the man cooking it in a pit nearby. Then a large plate of various Bahraini rices (orange and yellow) arrived, with an assortment of salads, to accompany the meal. It also included waters and a tea service. This elaborate feast set us back a mere 15BD ($35) – a bargain compared to the usual prices in this country. We enjoyed the meal enormously, but needless to say we could not finish it.

After paying, and on our way out, we were invited to have tea with these gentlemen – who earlier we noticed were sitting beside a literal cat-fight unfolding behind them. 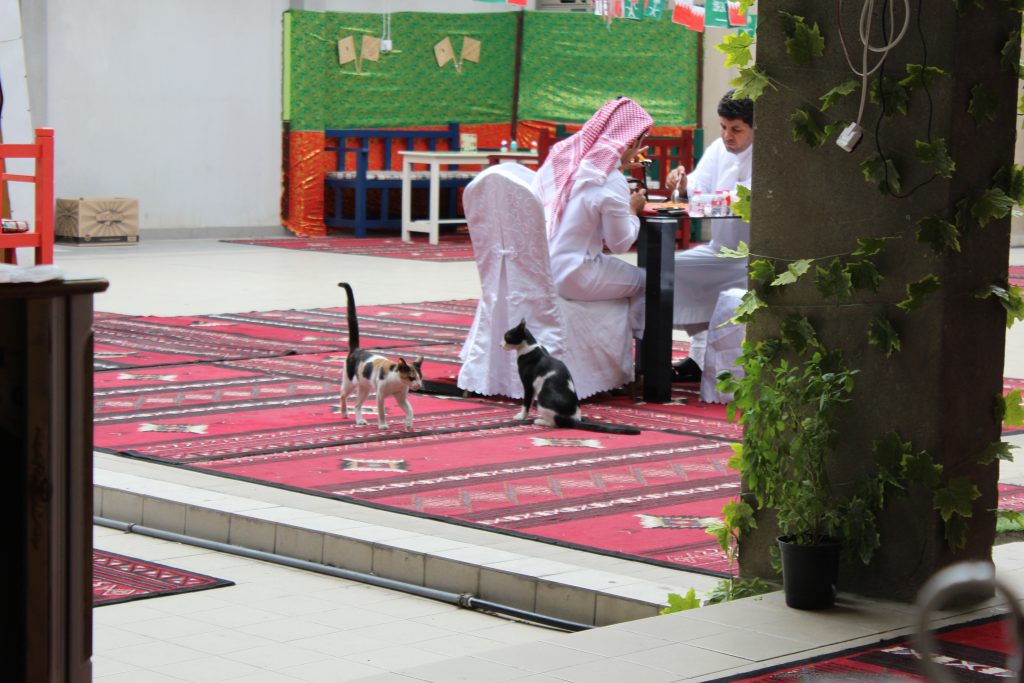 They were Saudi nationals who were doing business in Bahrain and also lived in the country. One spoke English very well, the other hardly at all. The chatty one was named Saleh, and had studied in the UK, at UCSB, and at UCLA. He was recently back in Bahrain to continue his family business after graduating with several engineering masters. We talked about all sorts of topics, but mostly American politics an Trump. As I suspected, the Gulf thinking actually respected Trump’s nationalism, but did see the danger in isolating the entire world, including the three Middle East unions – the Gulf union, the Islamic union, and the Arab union. Saleh perspicaciously noted that the only way America could be great again would be to unify, and that Trump would have to change his style to do that. He was optimistic that this would happen, while we were not. Brice had mentioned that the Trump dictatorship was already taking measures to weaken the government, to weaken defense, to alienate friends, and keep a stranglehold over politics in the country to ensure their power was secure. It was a very interesting tea.

After about an hour of discussion, the two gentlemen excused themselves as they had a business meeting to attend, and wished us well. We went on our merry way to continue our Muharraq adventure.

The next step for us was to head back to the area where we saw the Sheikh isa bin Ali house and go back to Bussad Art Gallery, which had caught our eye before but had been closed. Now it was open, as it had just hit 4PM. The art in there was all done by a man called Bussad, who apparently had an obsession with cats (shout out to you, Brendan!). 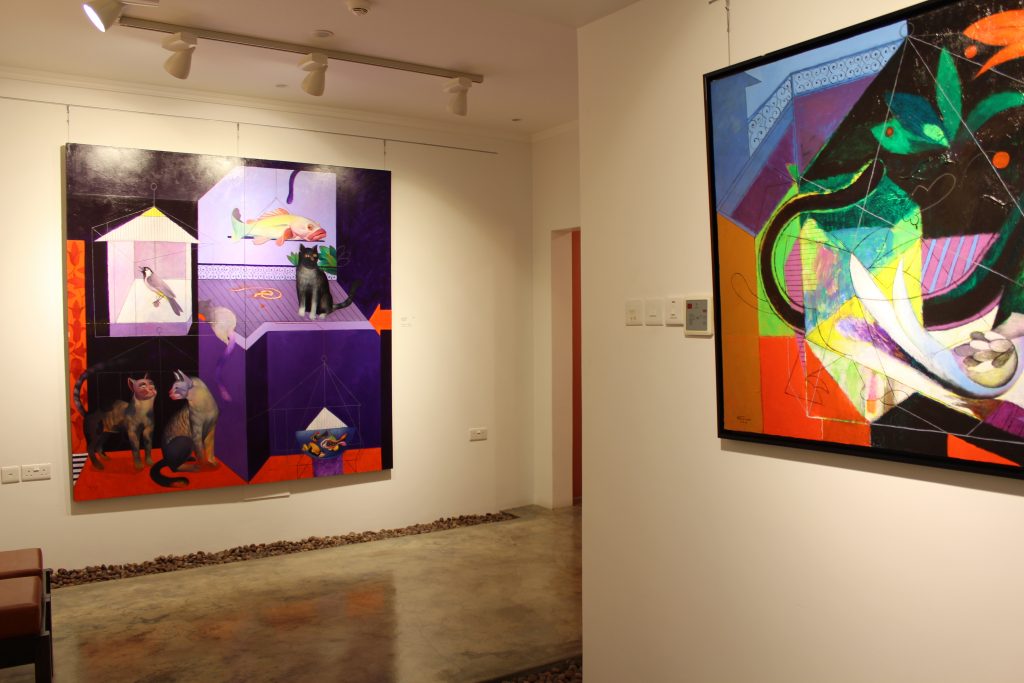 It was an interesting experience but the breadth of work left a little to be desired. The entrance was free and mainly we were just happy that such bastions of culture not only existed but seem to thrive in Bahrain.

After the Bussad gallery, we went back to the Suq to complete this part of our Muharraq adventure. We completed several of my missions without trouble – acquired jasmine oil from a tiny stall off a side street that we were led to by an older gentlemen on the mail street after asking around; 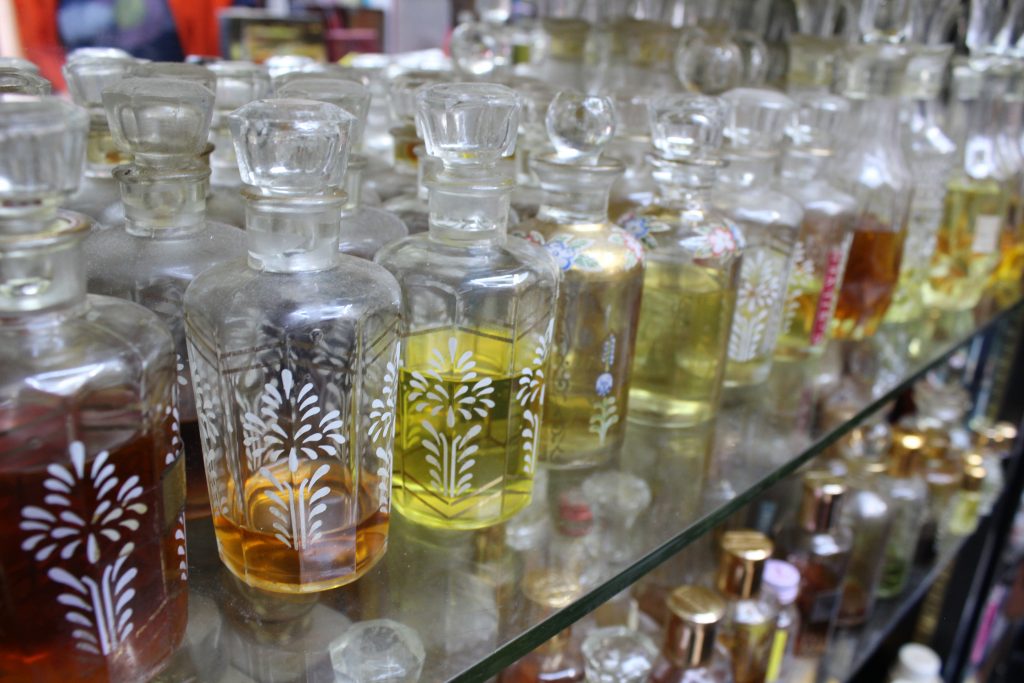 bought knock-off Rayban sunglasses for 2BD; and got my bracelet fixed (a chain had fallen off) for free. People in this city were extremely hospitable, and foreigners were welcome.

While waiting for an Uber we explored a mega-market (apparently there were super, mega, and hyper….and supermarkets were actually the smallest) and picked up some more tea.

Our next stop was the nightlife area of Muharraq – Lagoon Park. It turned out to be a bit like Universal City Walk blended with San Antonio’s Riverwalk. Three floors of restaurants, shops, lounges, children’s play areas, and entertainment options (bikes, motorized cars, laser tag) lined a large horseshoe area with water in the middle. It was clear that this was a very comfortable area for expats, and there were brand new constructions of apartments and condos lined up all around this area. There were a few drawbacks:

Other than those things, it was a nice evening! Since we were stuffed from lunch still, unfortunately we couldn’t muster an appetite and I didn’t even feel like trying shisha again – even though they were readily available. We called another Uber around 630PM and reached back to the Diplomat Hotel at 730PM.

I then went to the gym, had some light dinner, wrote a bit, and went to sleep. After all, it was a Saturday night (equivalent of the American Sunday night), so the city was sleeping and getting ready for the work-week.