The theme of my second day in Manama turned out to be Bahrain museums, including La Fontaine and the National Museum, and the Bahrain Fort. After a small breakfast, I actually got a somewhat early start (11AM – ha!). Brice was able to take another day off and we planned out a great day of Bahrain Museums, starting at the La Fontaine – contemporary art museum nearby in Manama. Even though we could have walked it, we decided to Uber because time of was of the essence today if we were going to make it to the Bahrain Fort for sunset.

Even though we were told that it was cool and especially was great for lunch, La Fontaine was a colossal disappointment for us. First of all, the Uber driver didn’t even know what it was – that should have been hint #1. Hint #2 was that there was absolutely nobody there (one person working with a laptop at the cafe). Hint #3 was that it was a tiny compound. Hint #4 – the art on exhibit was a Palestinian dystopic work about lack of place called “nowhere”. It was extremely Dissonant and jarring, which I expect as the point, but I was really looking forward to something cheerful!

There were some really good points about La Fontaine, but they did not correspond to 1PM on a Friday –

Here are a few pictures: 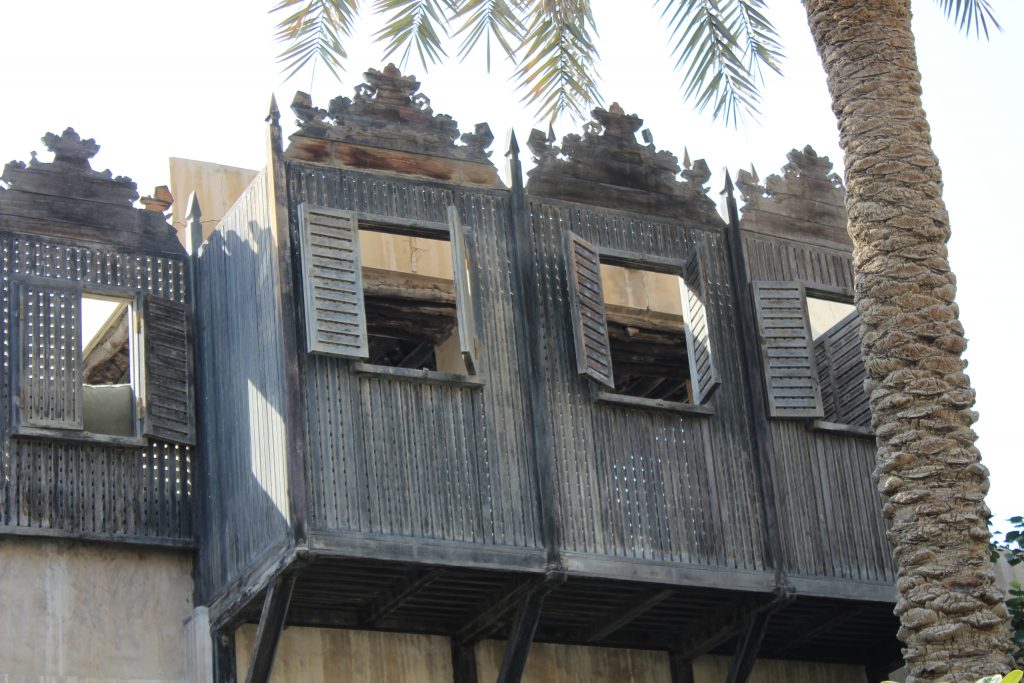 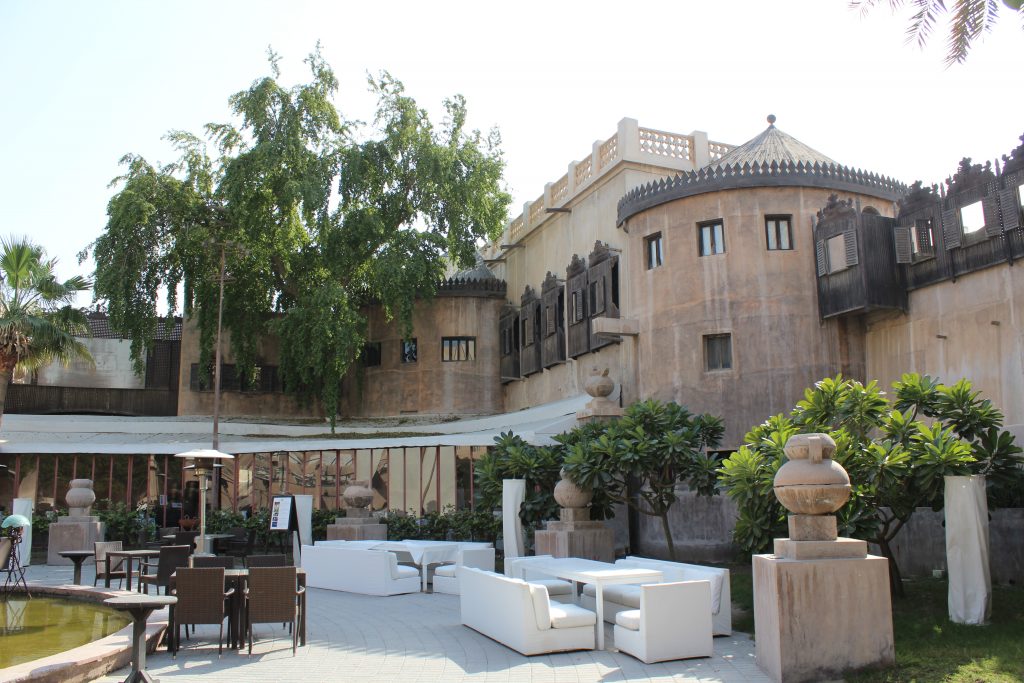 La Fontaine – a visit during our Bahrain museum day

Afterwards, we walked the streets a bit to find a major road to call an Uber. It was really nice that Brice had a local SIM card. On the walk, I was able to capture this wonderfully framed shot of the World Trade Center, which we had also noticed from the hotel and would explore more a few days later. I particularly liked this shot for its contrast of new and old. 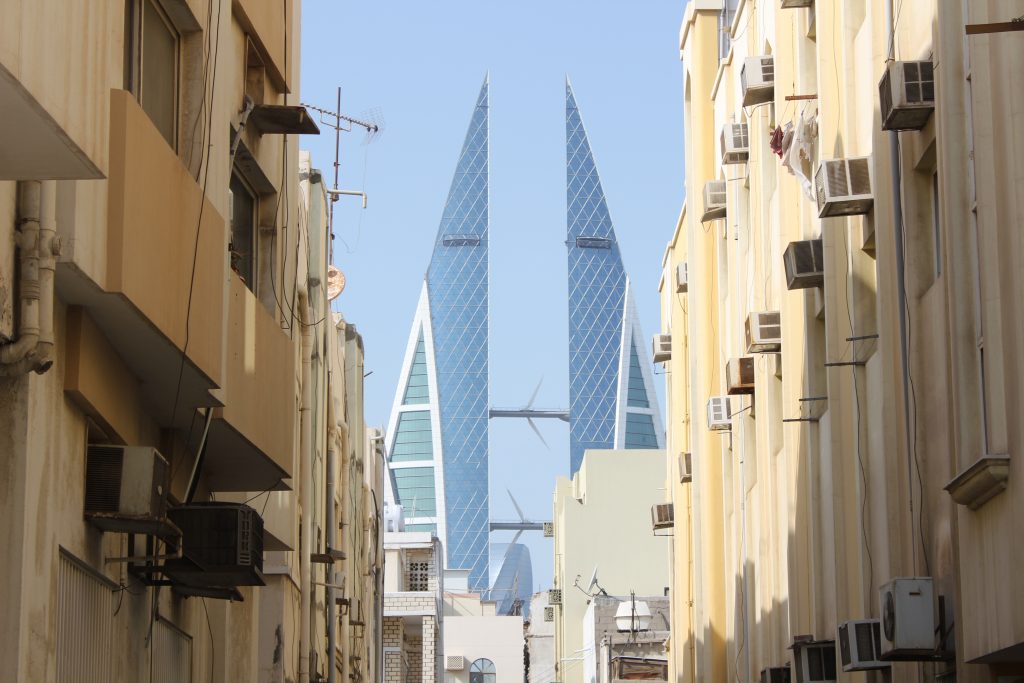 Since we were still in a Bahrain museum frame of mind, and since La Fontaine took us no time at all, we decided to head over to the Bahrain National Museum – the largest Bahrain museum in the country. 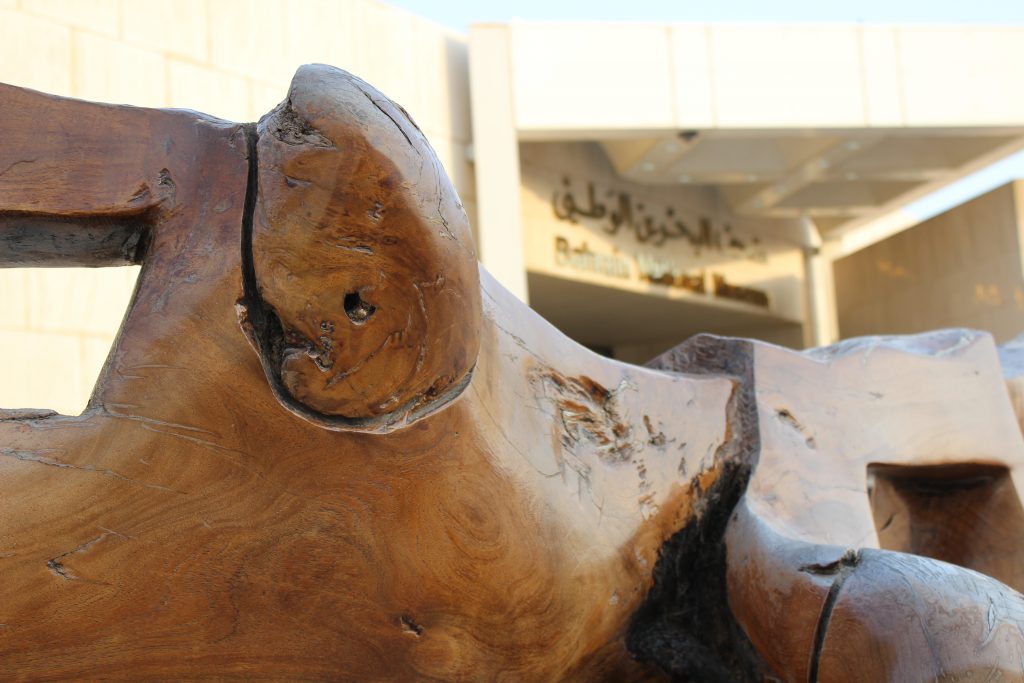 It was a hit. Not only was there a very nice and evocative contemporary art exhibit on display, there were also copious (too many) rooms that elucidated the Bahraini history and culture and a wonderful outdoor courtyard and cafe.

While neither of cared for this picture, it was really cutting and stirred a lot of emotion. We think that it intended exactly the effect it had on us, and we were definitely a little shocked that it was so prominently on display in a fairly pro-Western Middle Eastern country. 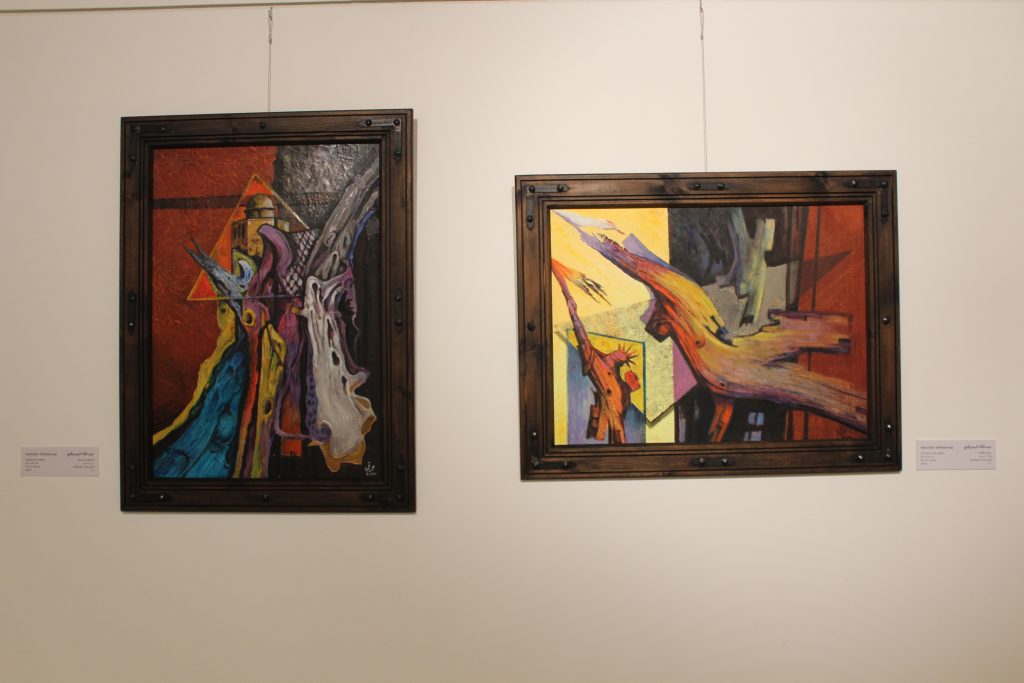 There were some other interesting exhibits like the manuscript room (old Arabic text and the evolution of the font) and the interactive map room with topographical models of the country, with key features pointed out when buttons were pressed.

By far, though, we enjoyed the lunch at the museum cafe and the view from the courtyard of both Jaffar in the distance (where two of the countries shipyyards were located) and the Bahrain National Theater. Not only was the view magical, but the food delicious (I recommend the mushroom and chicken curry sandwich and beet salad), but the tea was spot on, and the service attentive. 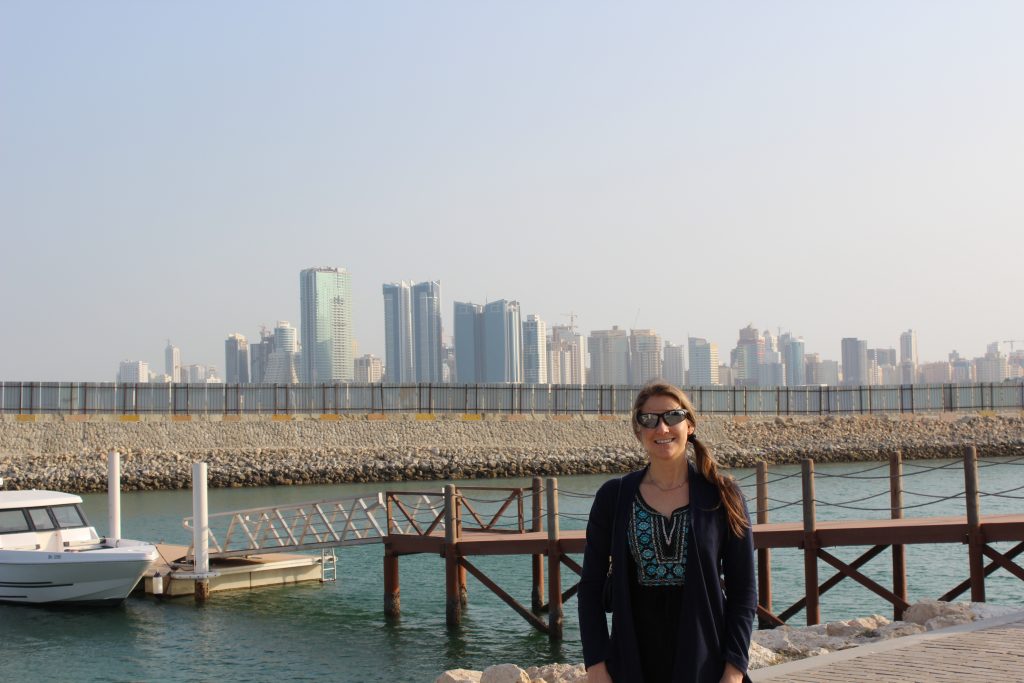 This took us until about 4PM to traverse, and by that time we were full and happy and ready to go to the Bahrain Fort (Qal’at al-Bahrain – قلعة البحرين), our final stop for the day. It was on the other side of the island and took 20-30 minutes in traffic to get there, and was situated in the ancient harbor of Dilmun. By the time we arrived, the sun was already on the decline, so we scrambled a bit to get to a high vantage point for some good pictures. 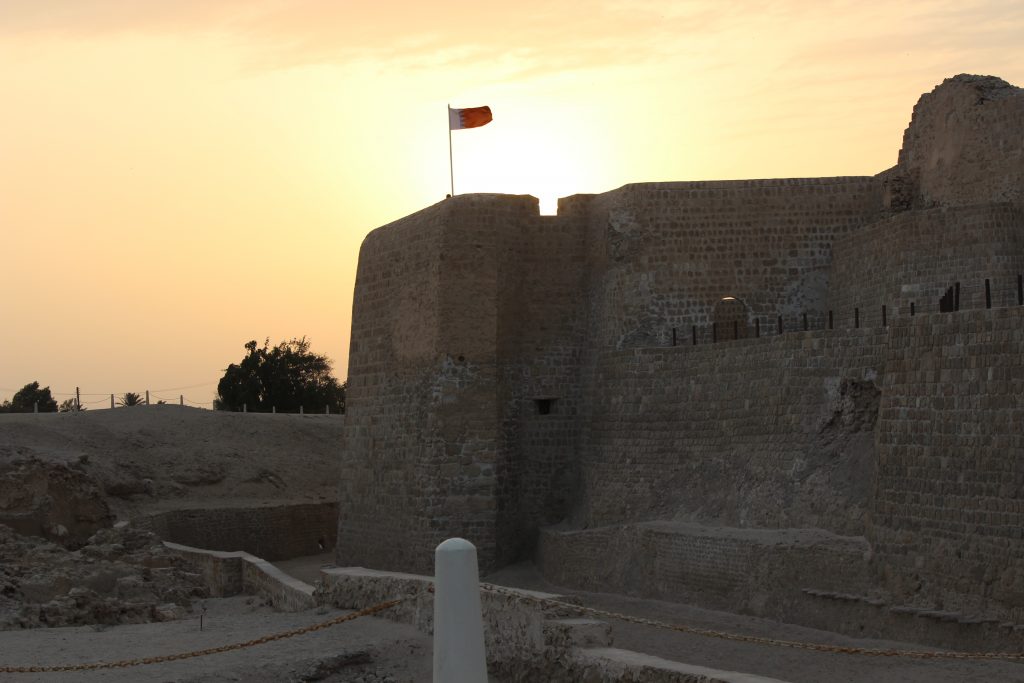 Yes, yes, it was a fort. No different than the hundreds of other forts you might see throughout the world, even though it was a UNESCO heritage site and quite old (used from 2300 BC to the 16th century AD). But there were a few unique things. First of all, there were several underground rooms with displays on date production. 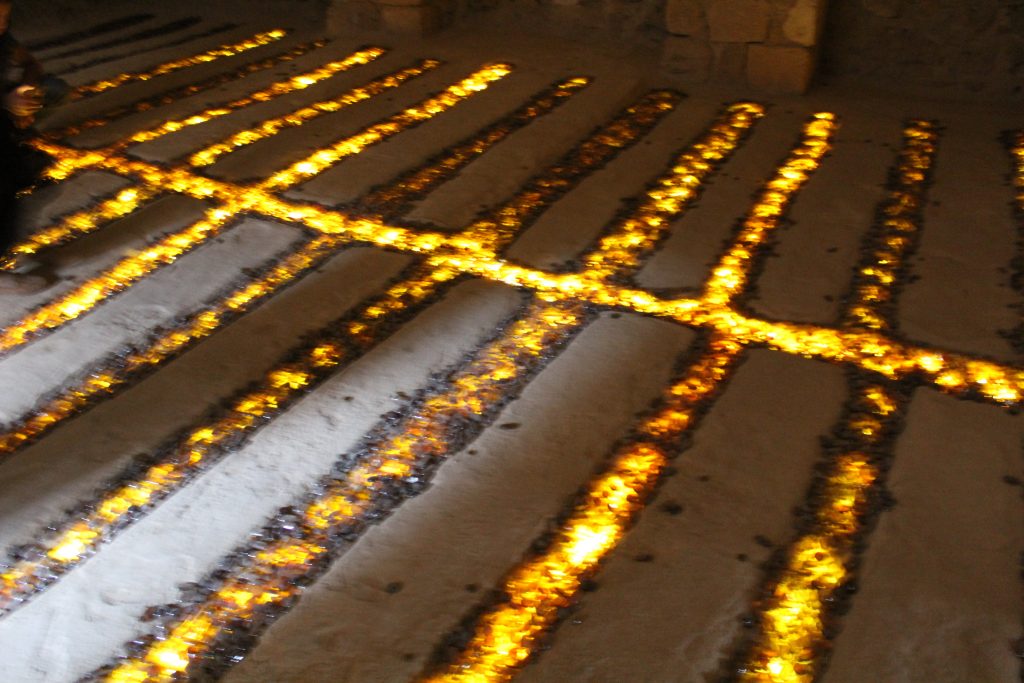 Second, there were random jockeys on the beach training on their horses (we think for polo) – both sprinting and a variety of English riding techniques. It made a glorious sunset backdrop. 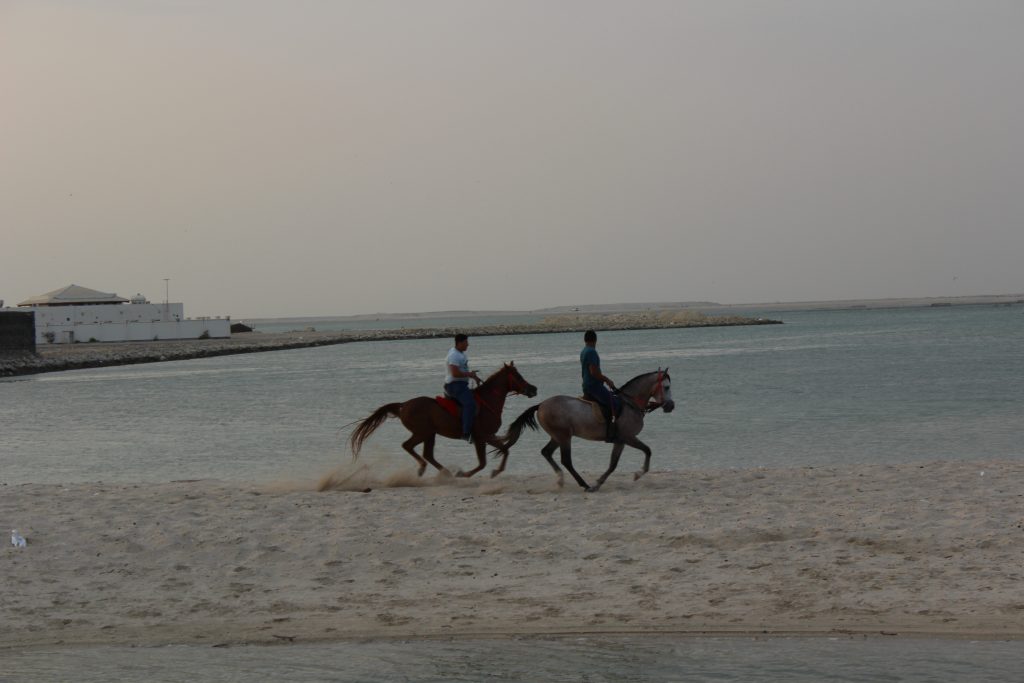 There, there were lights at night and illuminated various aspects of the fort! 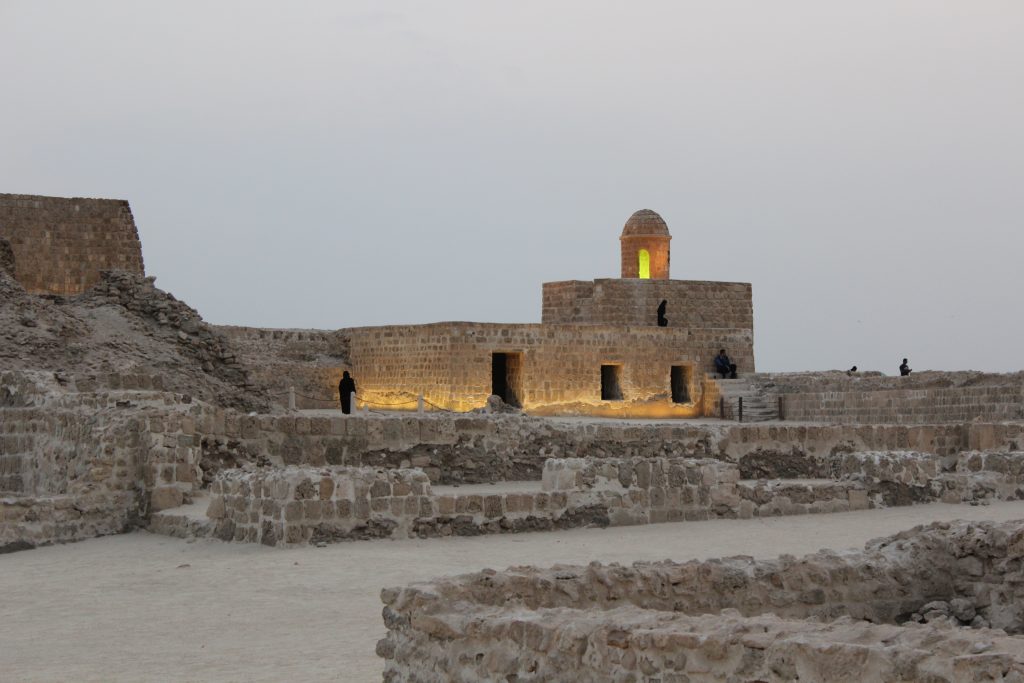 Finally, I enjoyed a few photogenic moments around the ruins. 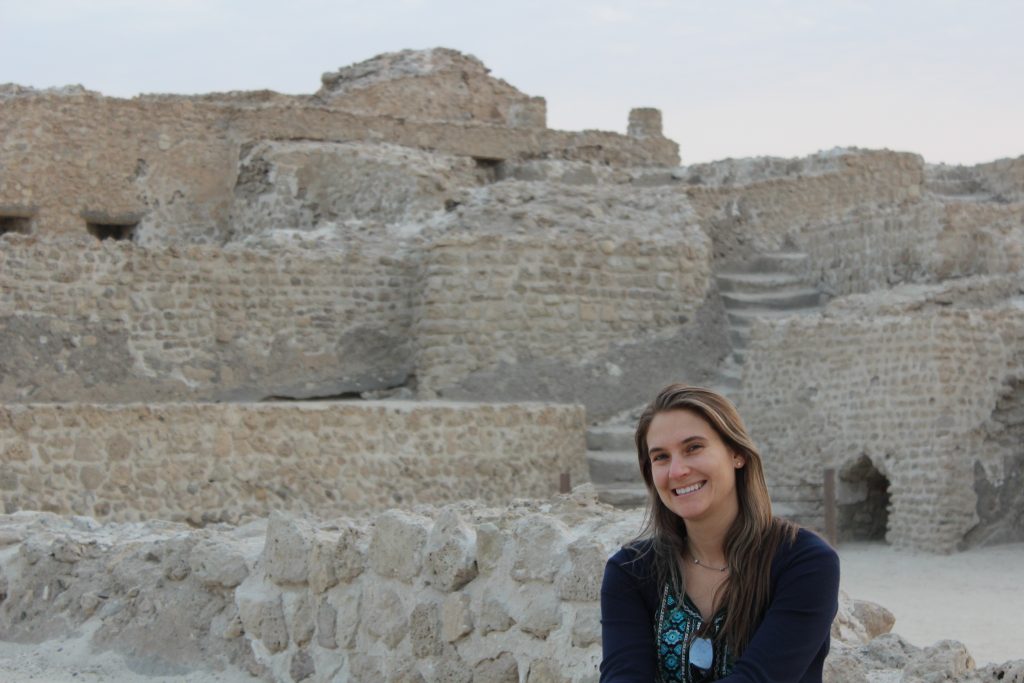 After calling an Uber (that was confused and went to the wrong Bahrain museum) and waiting for about an hour in the cafe/museum, we headed back to the hotel for gym, shower, dinner, and sleep. Another great day.