I woke up around 7AM (with the sun more or less after a bit of tossing and turning) and started my morning yoga routine in prep for a day of ecotourism in Costa Rica. Brendan slept an hour longer. Breakfast ended at 9AM and we already told Dirk we would be there towards the back-end of it, and we were true to our word. That said, there was almost nothing left when we arrived – early bird really does catch the proverbial worm here. There was a picked over selection of fruit, some yogurt, some cereal, toast and a little coffee remaining. Dirk offered to make us some eggs as well and a few moments later a plate of one fried egg showed up for me and a heaping helping of scrambled eggs appeared for Brendan. I should have ordered the scramble! Seriously, though, we never did get tired of the view from the patio lodge at breakfast-time. 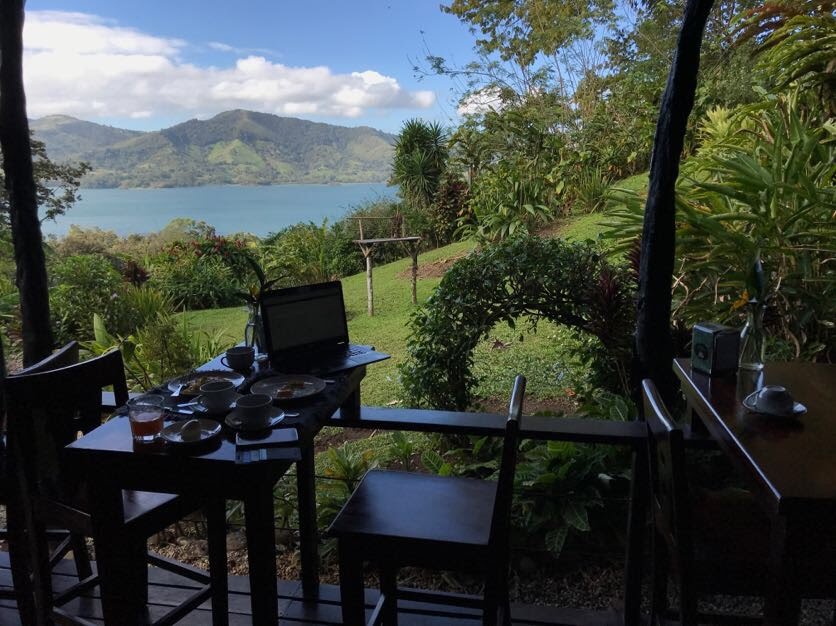 After breakfast, we got moving fairly quickly after discussing some potential ecotourism options with Dirk. He suggested a few things for us – first, we wanted to see animals, so he suggested the ecoutourism Ecocentro Danaus, just outside La Fortuna. We also wanted to do some hiking, and he suggested El Silencio (hiking through the forest) and Arenal 1968 (hiking through a lava field). We decided to make today a bit more of a lazy day, and started first for the animal ecotourism experience. It was my turn to drive and I powered through despite feeling a bit drugged and drowsy. Brendan had a similar lethargy hanging about him and we wondered if it was the humidity, or just the mentally taxing day we had crossing the border.

The drive took us through the town of La Fortuna, where we had previously considered staying. We were now glad we stayed in Nuevo Arenal instead – it was a busy, touristy strip of kitschy shops and restaurants that all looked cheap and cheesy. It was indeed a lot more built up that the north side of the lake where we were staying; the plus side of La Fortuna of course is the location to most of the national parks and adventure activities.

On the drive to the ecotourism center, we had our first coati spotting about 15 from our lodge headed south. Coati are mammals that look like a cuter and more cuddly version of a racoon with a very fluffy tail. They tend to travel in packs, and make an adorable “brrrrr” cat sound. There would be many such sightings over our four days in the region, and cars stopped on the road for no apparent reason was always a dead giveaway that coati were on the prowl. Some stupid tourists even stopped to feed them, which was not allowed, but of course encouraged the coati to swarm. 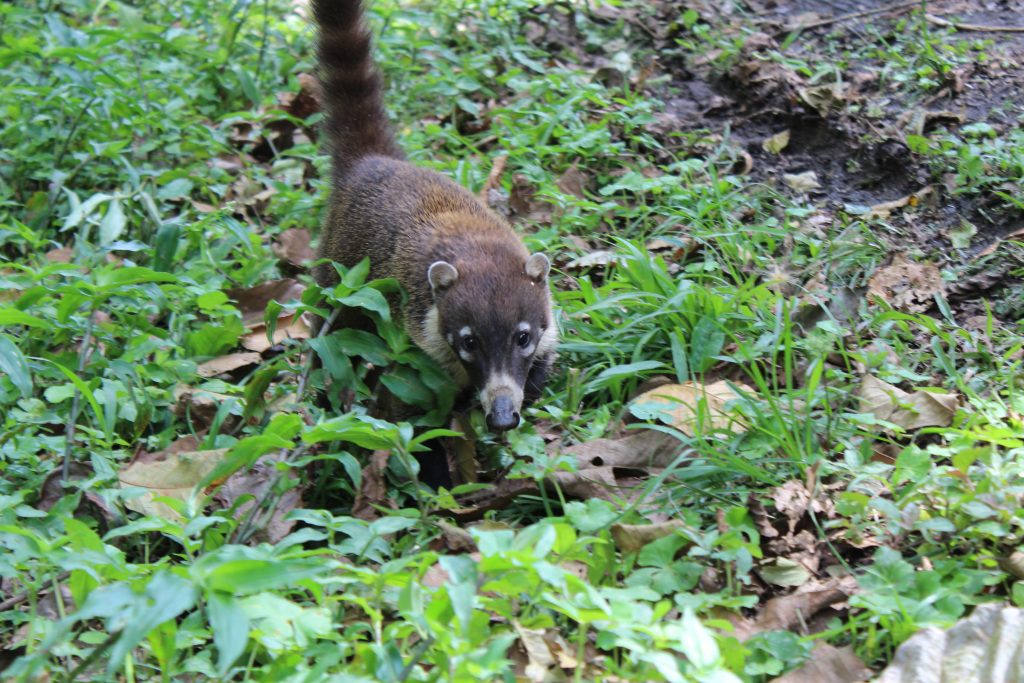 Side note: on our drive through La Fortuna, I accidentally went the wrong way on a one-way street. We literally just continued on the same road we had driven on for the past hour, but suddenly I started to notice cars parked the wrong way on the right side of the street. Seconds later, cars were honking at us. I made a quick right turn and we ended up near the supermarket, so we decided to head inside to buy some water and white wine for later. The supermarket has everything but Red Bull. The second time driving through the town on the way back we noticed a very faint market on the road indicating the one-way nature of the street. It was literally impossible to see if you didn’t know about it already.

Quickly after La Fortuna, we saw the turn-off for our ecotourism center. It was a bit down a dirt road next to some farmland. When we got there, we were told that no guides were available until 130PM (it was about 1130AM when we arrived). We didn’t want to wait, so we decided to just go in on our own for the $17/per person fee. It would have been an extra $5 each for the guide, which Dirk recommended we do so that we could know what we were looking at and also get some help spotting animals.

However, it turned out fine. The staff took pity on us and immediately brought us to a site where a sloth had been spotted, so that was our first ecotourism animal encounter in Costa Rica. 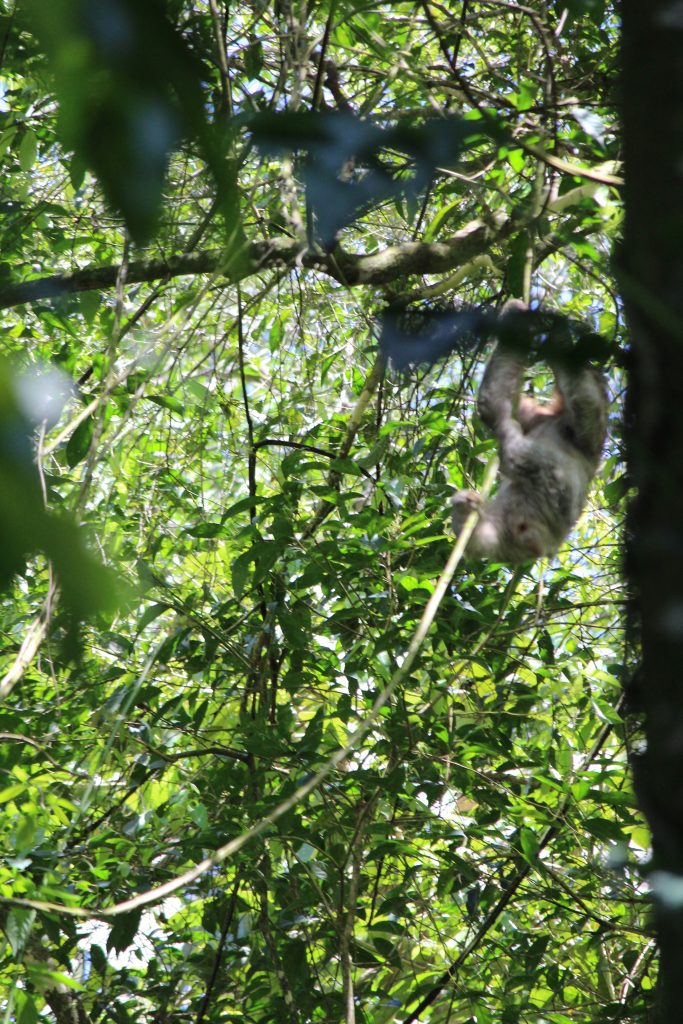 Three-Toed Sloth at the ecotourism center

We also saw some agouti run by (they are kind of like large guinea pigs), and some then again towards the end of our hike as well. 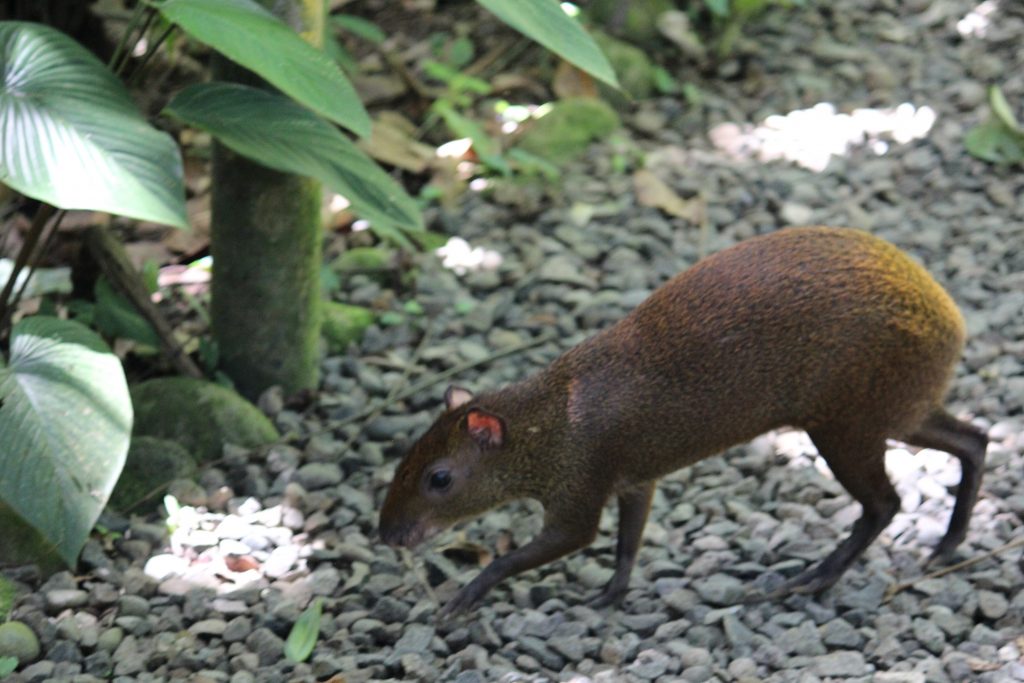 After the agouti and Three Toed Sloth sighting, we moved in to the bird and butterfly area and spent some time taking that in. 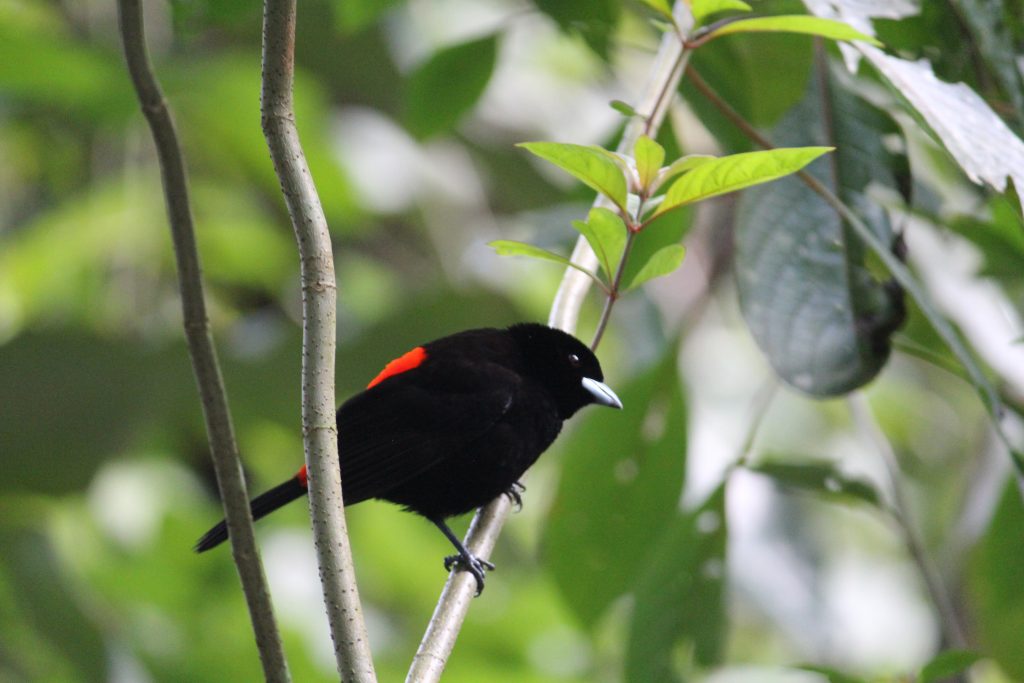 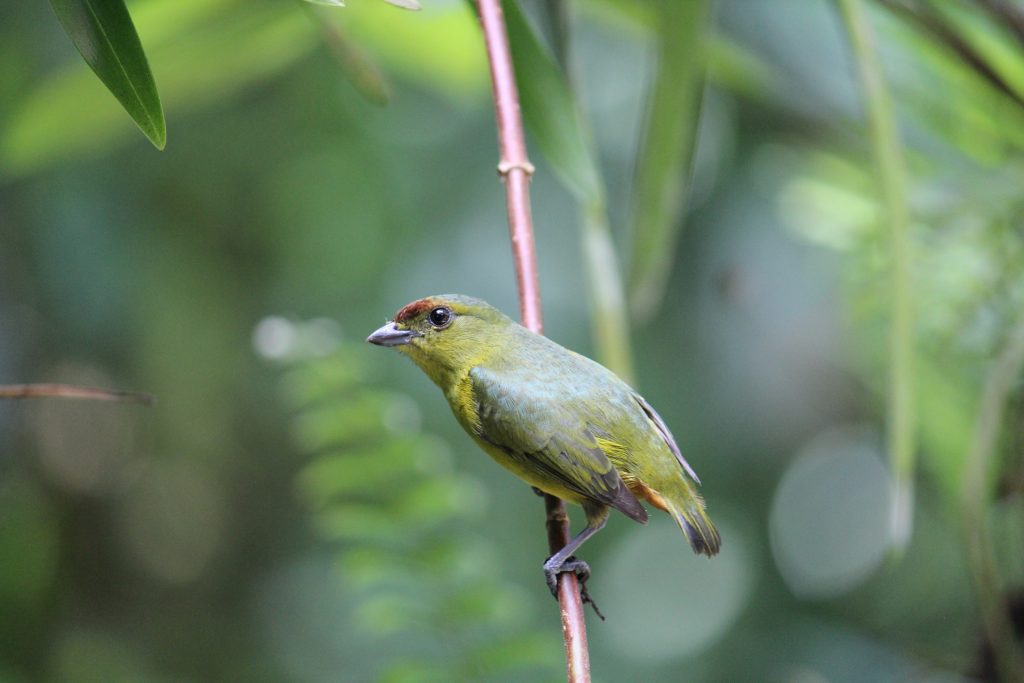 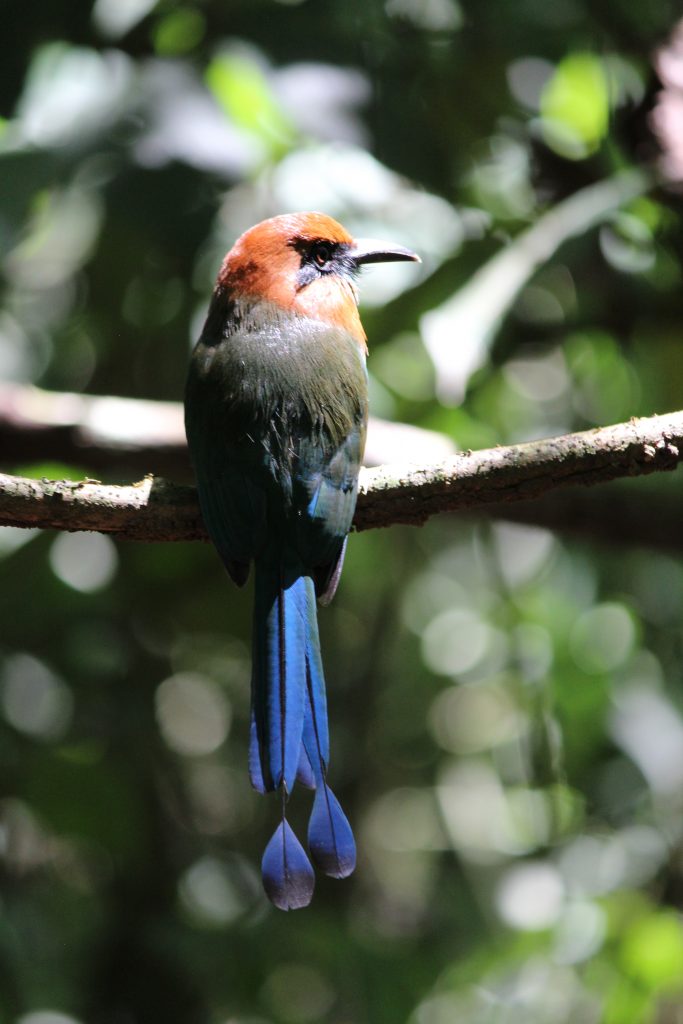 We had already seen some toucans as well right before the sloth. 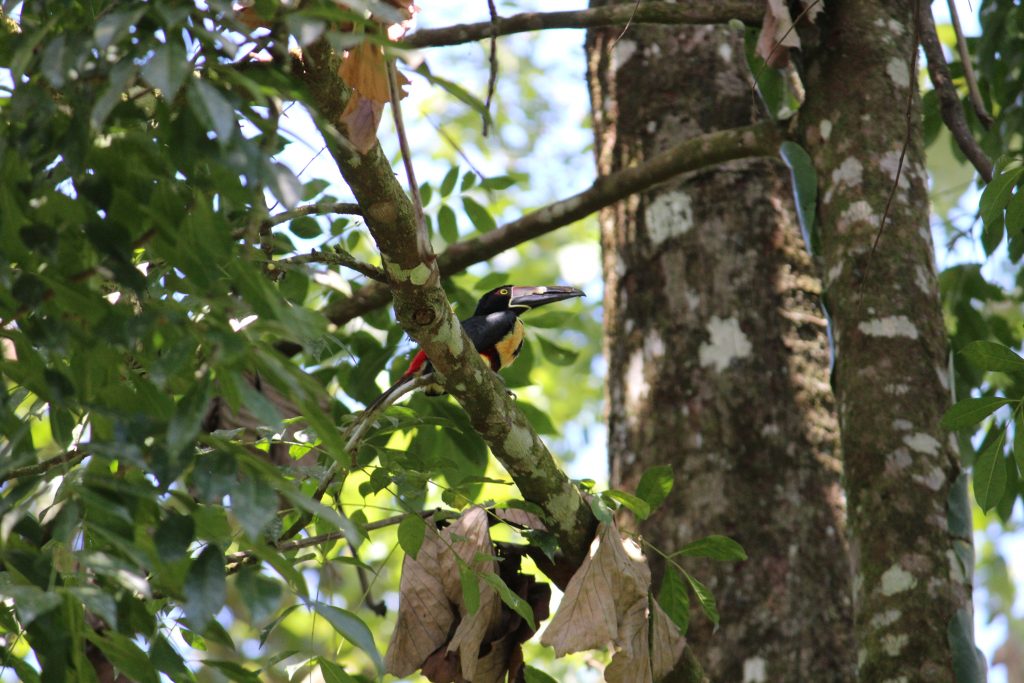 Then, we investigated the lake where we saw more birds, including what we thought was a Blue Billed Heron with a baby on the nest. 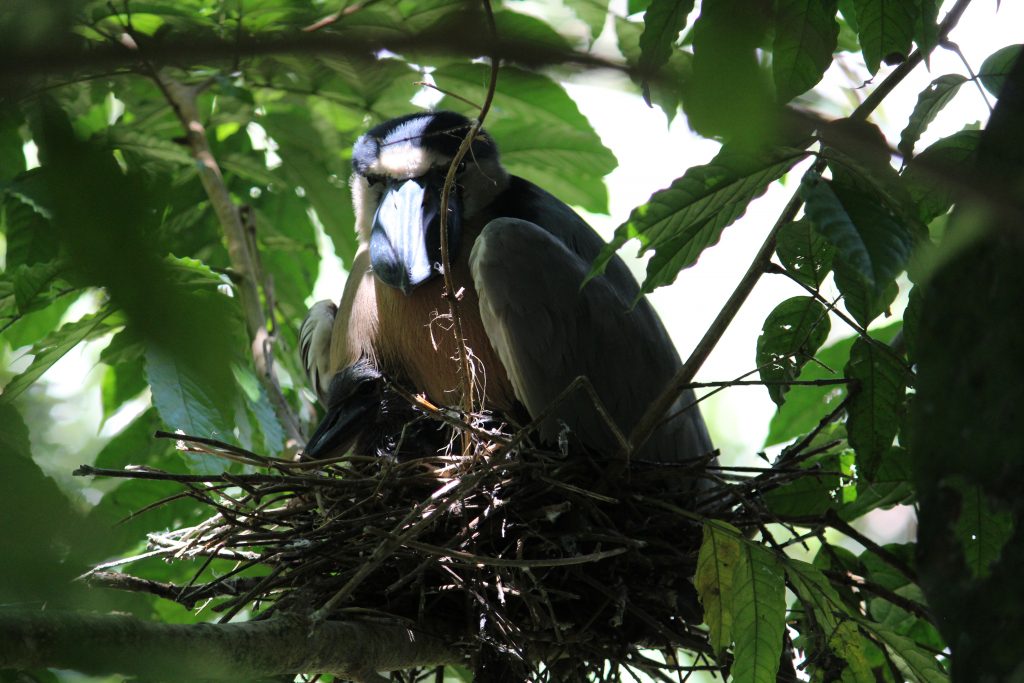 We spotted a caiman almost immediately as we crossed the bridge, but unfortunately were not able to see any of the colorful frogs (the only animal we didn’t get to see on this ecotourism voyage). 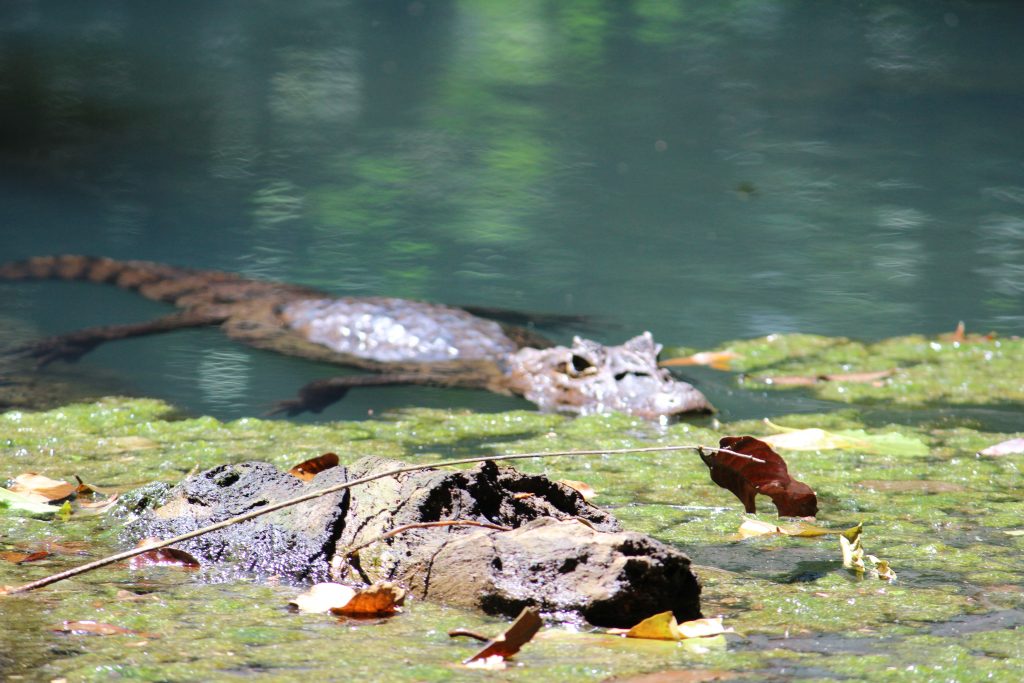 We continued through the forest and towards the end were again rewarded with a Two Toed Sloth hanging around and munching some leaves. Another staff member was kind enough to point it out. 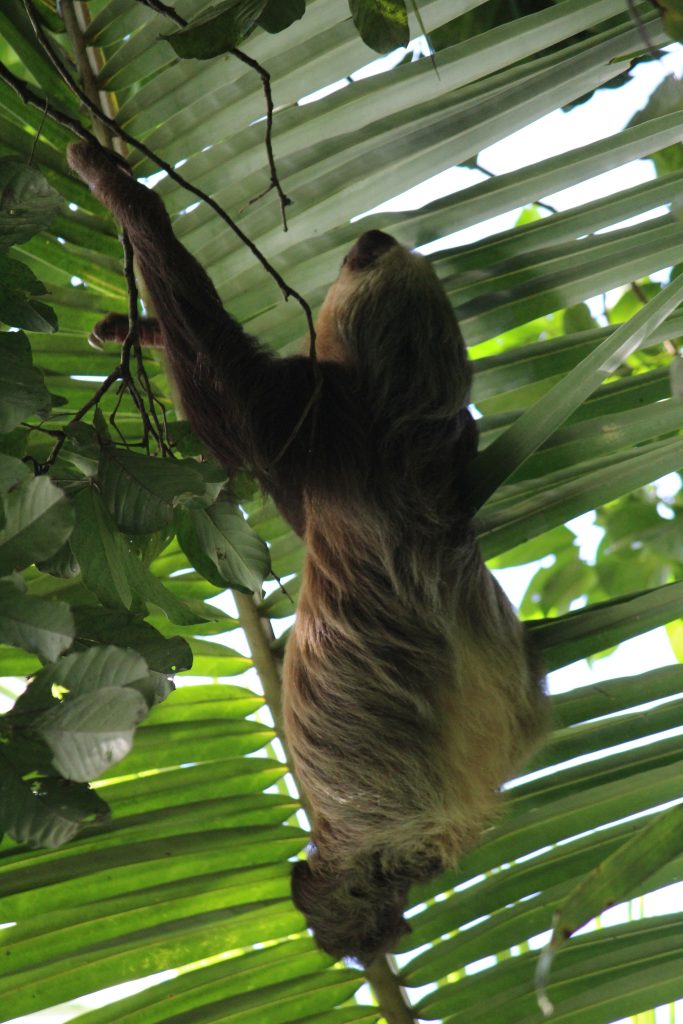 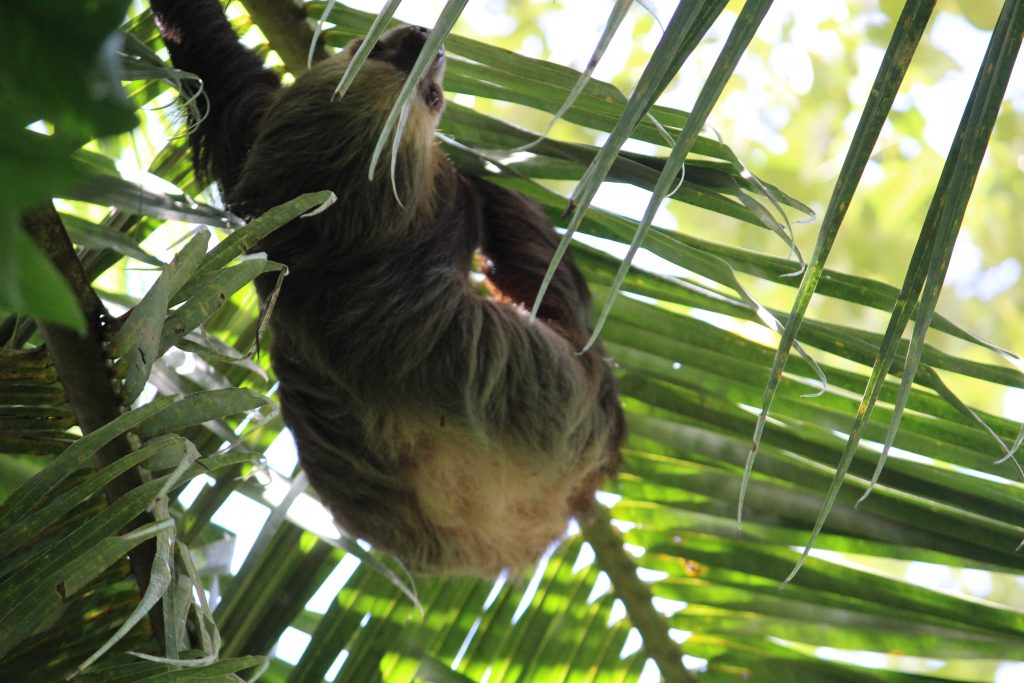 There was enough signage along the way with tips about what you were looking at that we felt like we got our money’s worth, despite not seeing the frogs. The ecotourism center was a great start to whet our appetites for Costa Rica. We also spotted a lot of beautiful flora and fauna, making the visit even more rewarding.

After our ecotourism visit, we went back through La Fortuna (this time the correct way on the one-way street) and stopped at a few art and souvenir shops. While we saw a few things that caught our eye, nothing special really called out to us.

Continuing on our way back to Nuevo Arenal, we decided to turn off at the exit for the Hanging Bridges down and then up a very steep windy road to the top of a mountain with a great overlook of Arenal volcano. 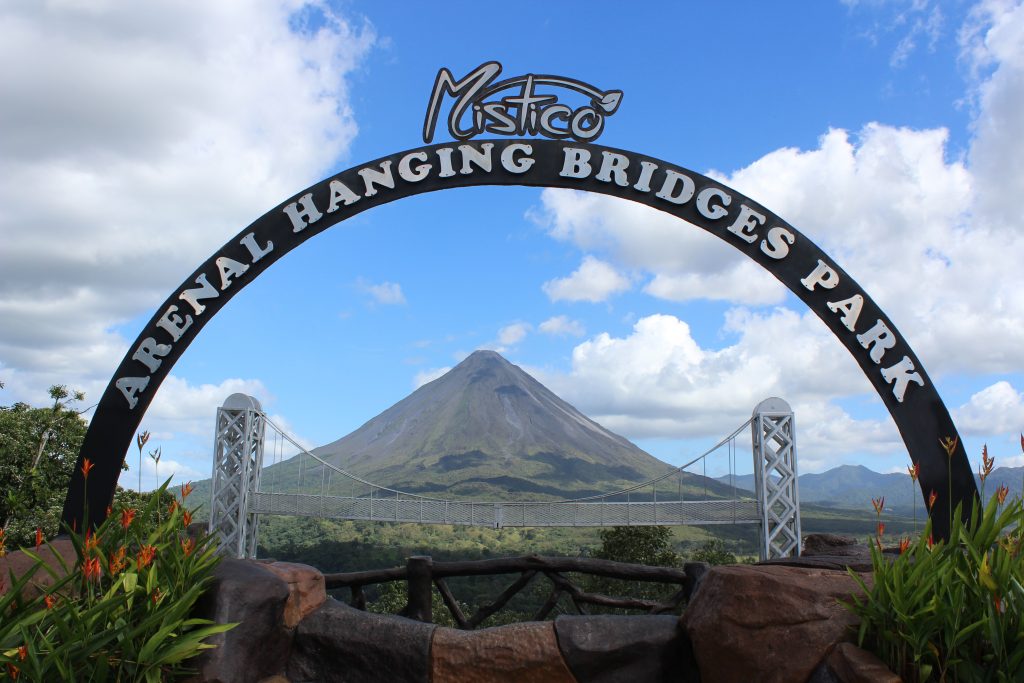 Upon further inspection, the area was really a super-tourist attraction offered by a company called Mistico, which also offered zorbing, ziplining, and horseback riding. To do the Hanging Bridges was going to cost us $26 per person, and it looked super crowded and awful so we said no thanks, and drove back down the mountain.

Since we wanted to make this a light day, we decided to head back to our hotel. On the way we stopped for a late lunch/early dinner (linner) at Le Bakery on Le Mansion, a French-styled resort on Lake Arenal. Interestingly, the whole Arenal area was geared towards Europeans – with Swiss, German, and French restaurants and chateaus dotting the road. We actually found them charming where they could have easily been ridiculous.

The view was incredible from the backyard patio, overlooking an infinity pool and the lake. 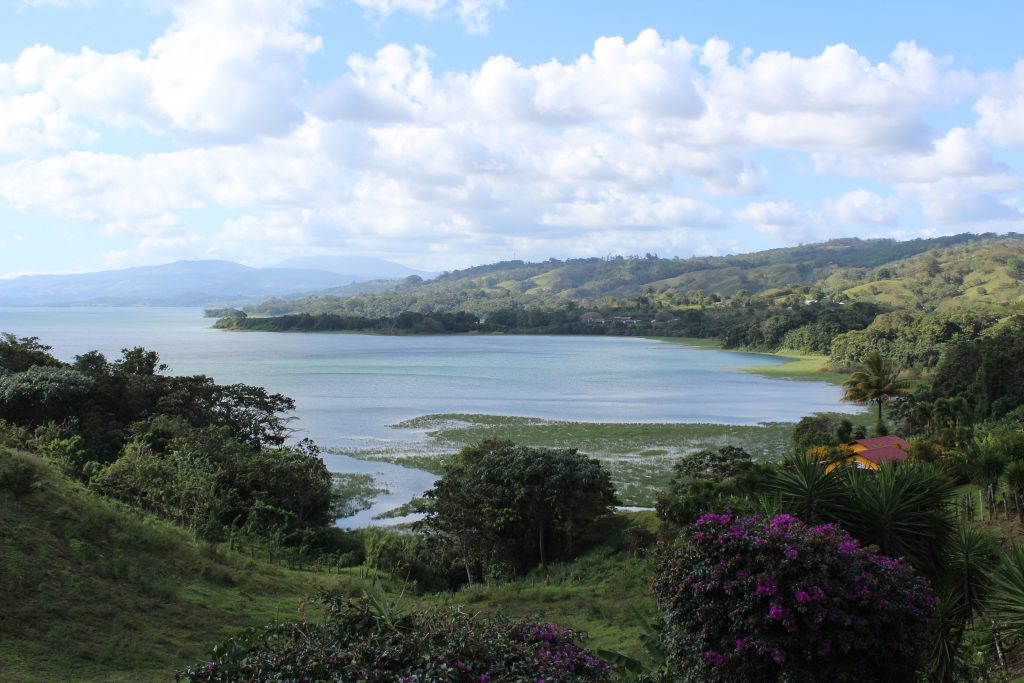 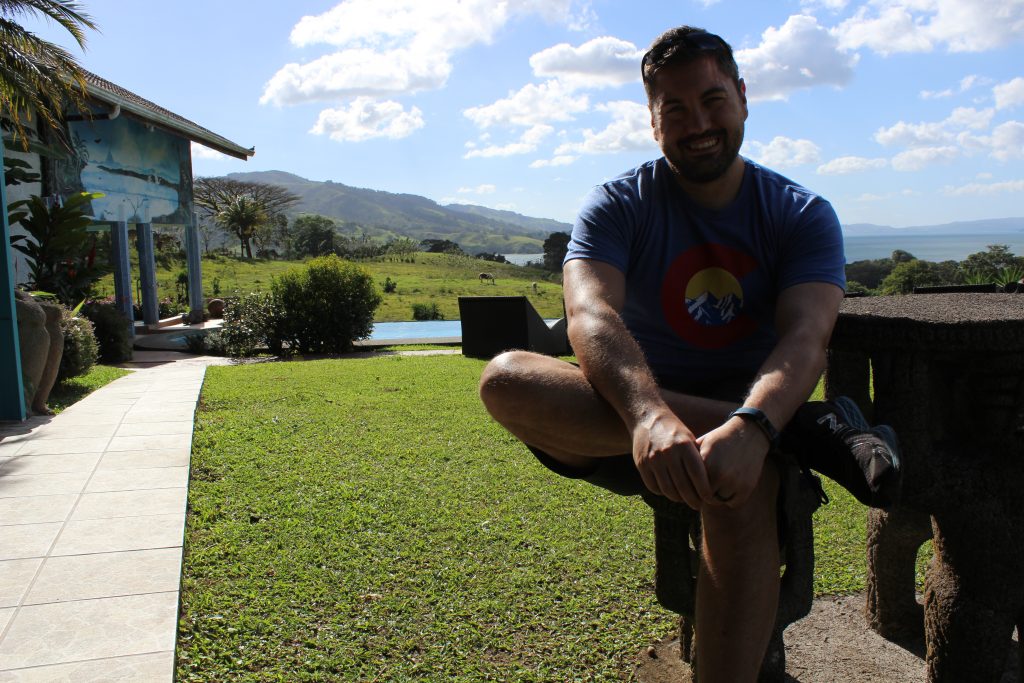 They even had great internet! So great, that we decided to call Expedia and fight the battle of the insurance refund before Brendan’s 24 hour $10 phone/data plan expired at 3PM. We were able to accomplish this at 259PM on the dot!

Soon after, our ham and cheese sandwich and quesadillas arrived, and they were delicious (the view and ambience only made everything better). We enjoyed the place so much, and the friendliness of the staff, that we stayed for dessert. I ordered a chocolate cake and ice cream, which was far superior to the cake in Nicaragua, and Brendan ordered a waffle sundae. We enjoyed them both enormously. Just as the sun started to go down, we checked out one final stop in that area, a souvenir shop and bar called Toad Hall, with a Disney-esque life-size replica of a giant toad (Brendan is quick to correct me that it’s actually a Looney Tunes character). It was more bar than souvenir shopped, so we came and went pretty quickly.

We enjoyed the 20 minutes or so drive back to our lodge where we caught the remaining glimmers of the sunset. Brendan enjoyed some of our wine and we just relaxed for the rest of the night, attempting to use the internet (and failing) down stairs. I also spent some time catching up my blogging, and we turned in early without dinner thanks to our linner at the French restaurant.