It was about 2 hours to Nuevo Arenal, where we had booked 4 nights at Ceiba Tree Lodge through Booking.com. We had made it across the border with a lot less hassle than we had expected, but we were still wearing thin on energy and eager to arrive to Nuevo Arenal. The roads were great and traffic was nonexistent, and Brendan graciously agreed to drive the first day (we would take turns after that). Driving was much better than in Nicaragua, and the roads were better as well. We did encounter a few potholes once we were off Highway 1 and on to Highway 142, but it was nothing that couldn’t be handled. We made only a few wrong turns on the way via our pre-downloaded Google offline maps, and took a very scenic road around the Lake Arenal to our destination of Nuevo Arenal on the other side. It was no problem at all. We were happy to have an SUV even so. Here was our route:

We had a brief stop at a scenic overlook on the west side of Lake Arenal, about 45 minutes from our destination on route 142. 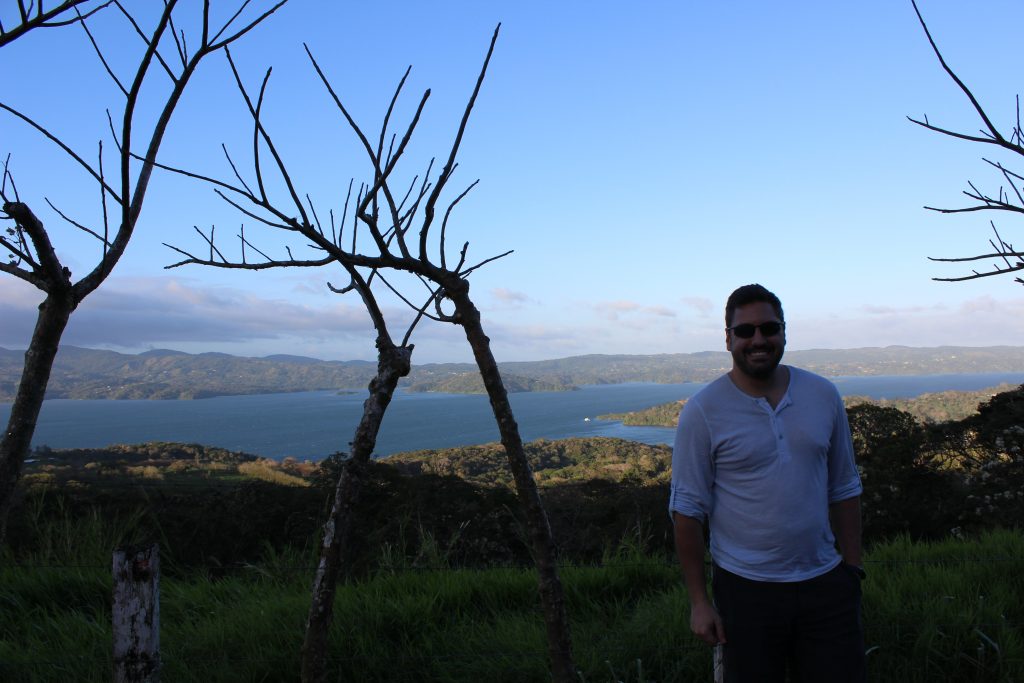 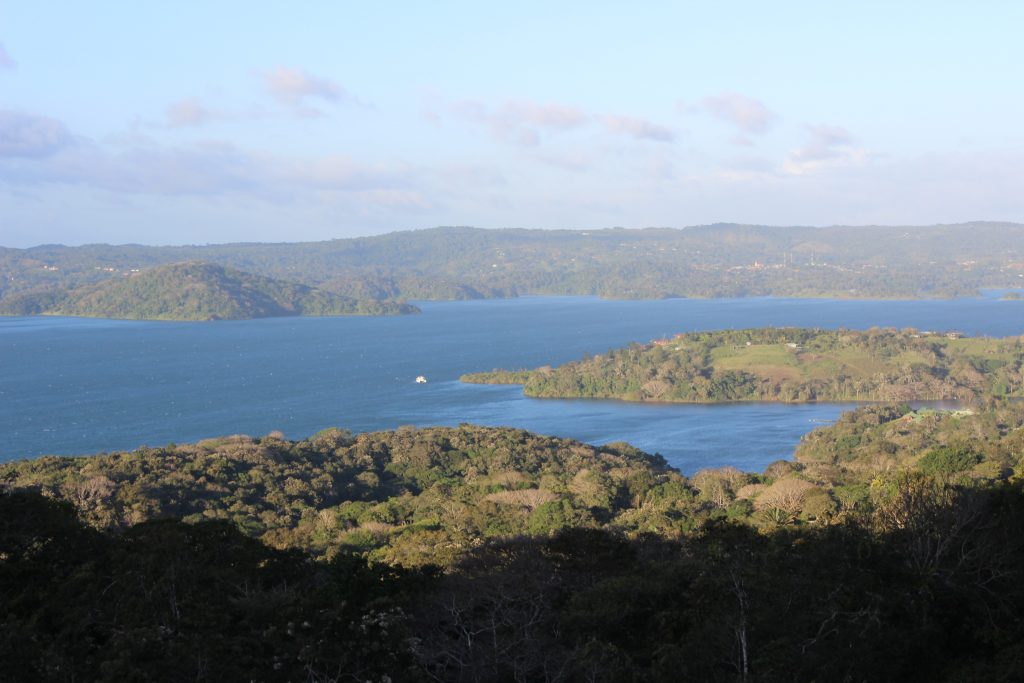 The turnoff to the Ceiba Tree lodge was a little complicated at dusk and we unfortunately went too far up a steep hill, only to realize we had to turn around and go back to the area that we had passed with a closed gate. The B&B operator, Dirk, later told us that he had only closed the gate because a herd of cattle came through and he didn’t want them to enter the property. Unfortunately, it kept us out as well! The lodge was right next to a 500 year old tree (called the Ceiba tree), which was supposedly the inspiration for the tree used in the movie “Avatar.”

Here is the tree! 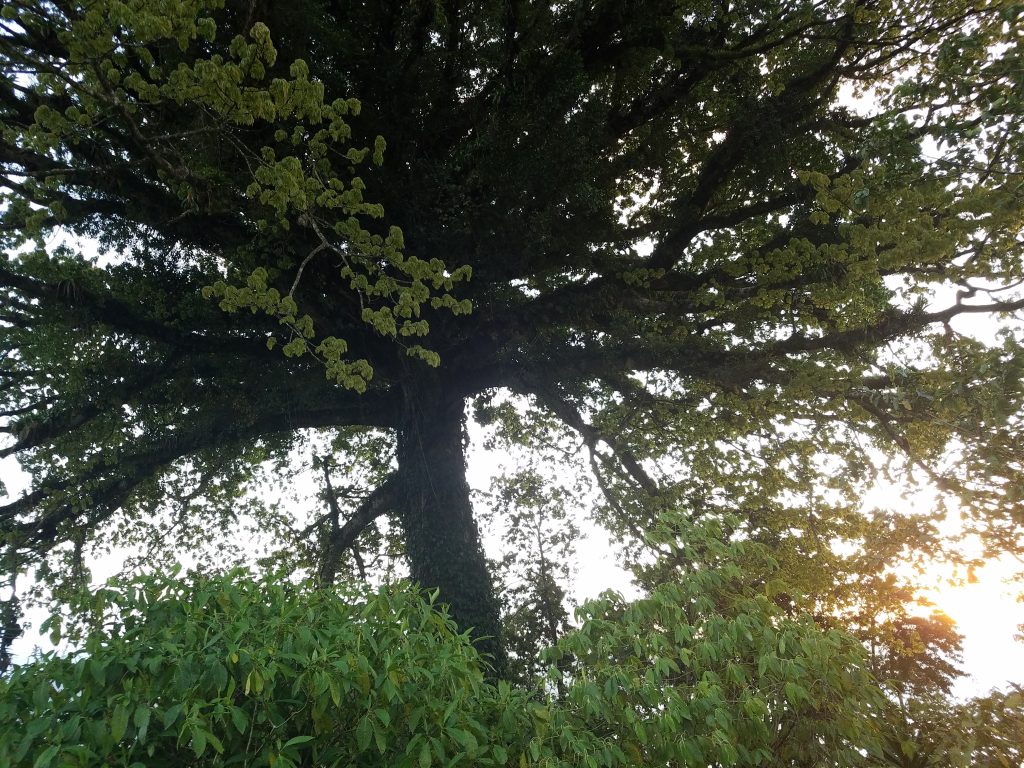 We figured out the road up the mountain quickly, made a 100 point turn, and pretty soon we made it back down to the gate, Dirk let us in, we parked at the top of the drive-way, and were checking in to room #2 at the very top of the property. It was a 10 room B&B that was $80/night, with a simple breakfast included. No A/C, but a spacious room with a fan, a beautiful porch/patio area and dining areas, and a great view of the lake. 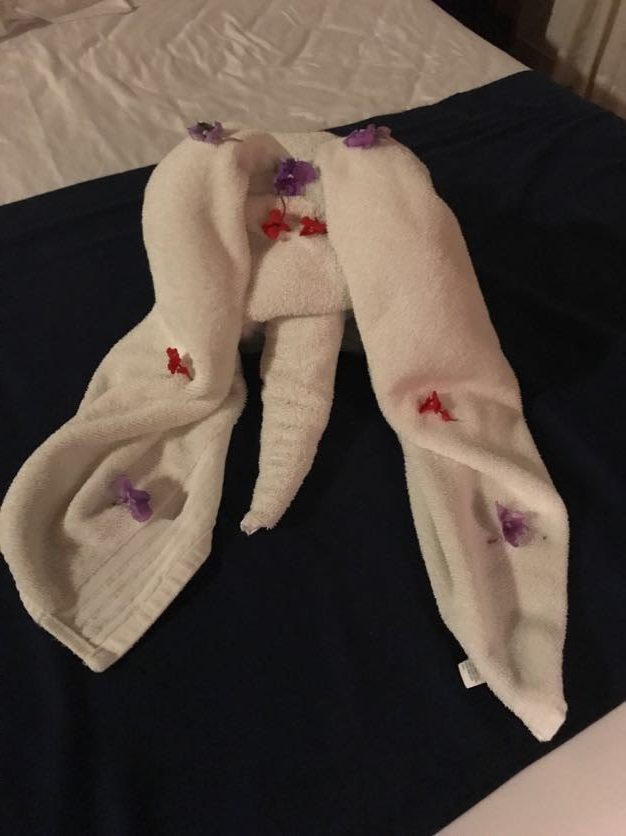 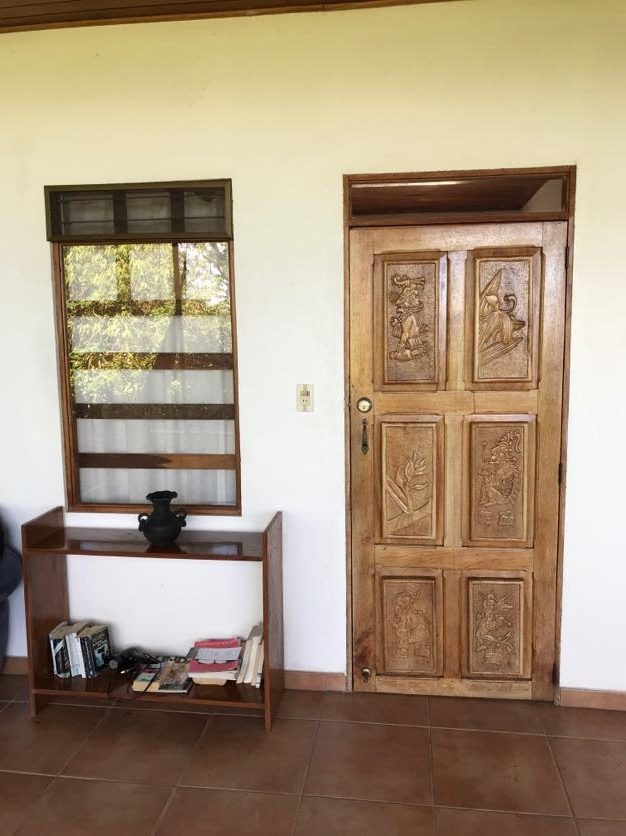 We had prepaid the first night via Paypal several weeks in advance of arriving to Nuevo Arenal.

Here are some sweet views from the lodge: 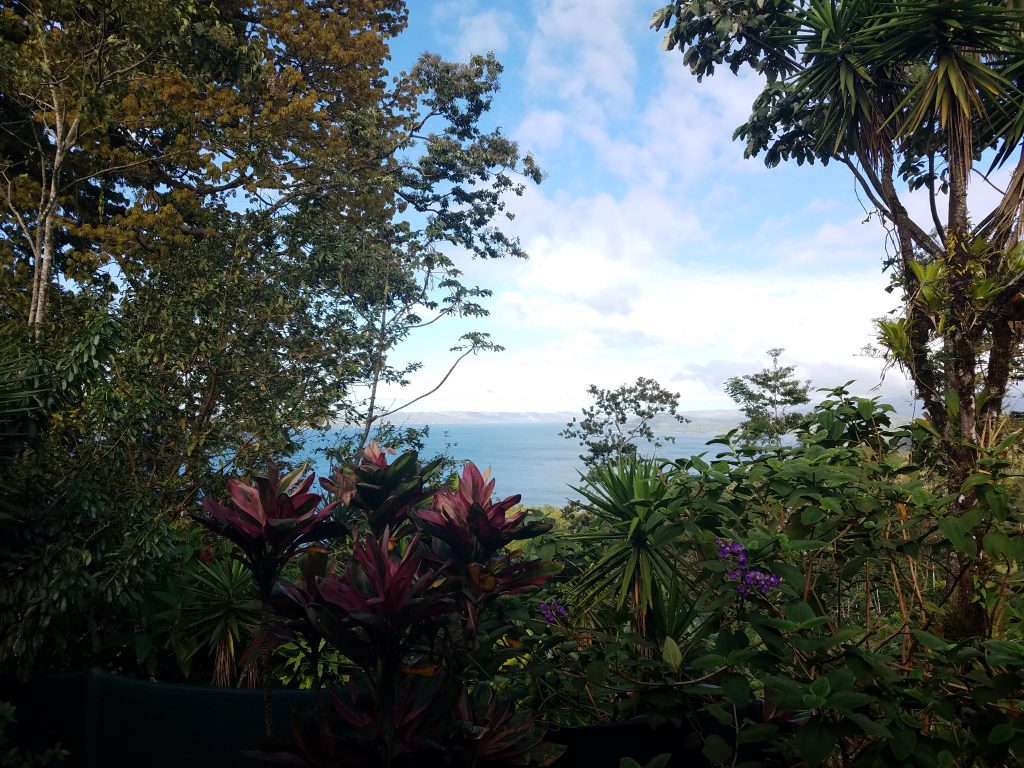 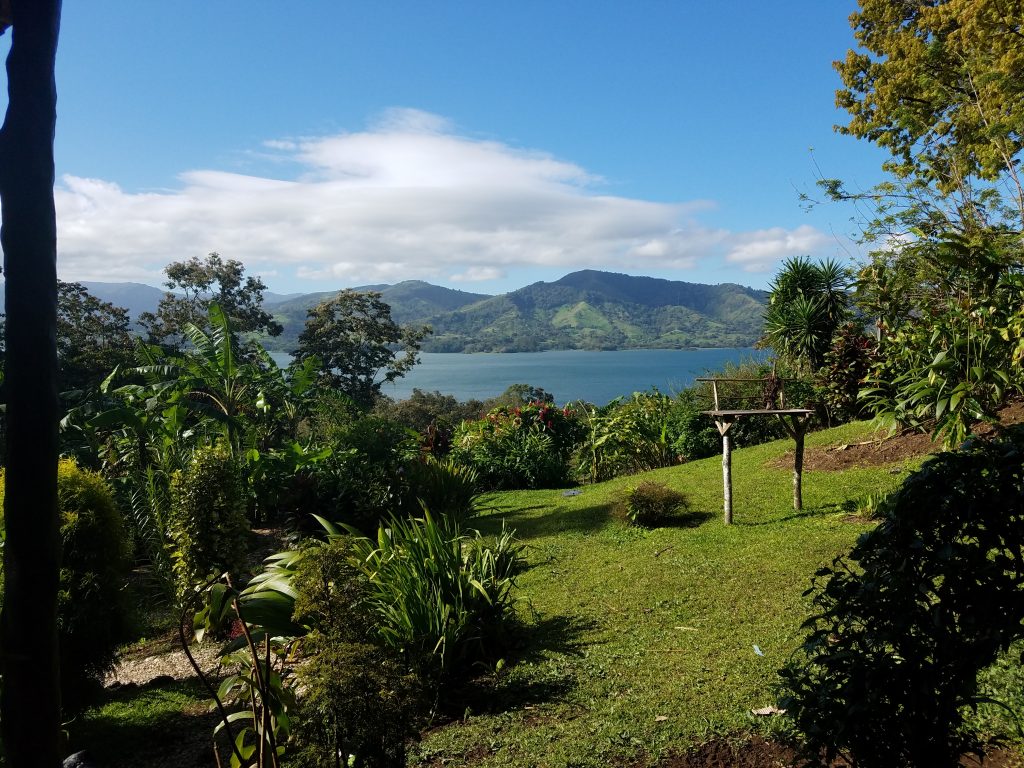 Our biggest complain about the lodge was that the Wi-Fi was terrible. Most of the time it didn’t work at all. Brendan did a speed test one day and it was limping along at 1kbps, which is slower than the dial-up days 30 years ago! The lodge advertised Wi-Fi in the public area and the speed at which it was offered was not acceptable for the price we were paying. #Traveltip: if you need internet to do any sort of work while you are in Nuevo Arenal (such as trying to complete paperwork around buying a house), do not stay at the Ceiba Tree Lodge. Everything else was very nice.

Dirk was a German who moved to Costa Rica about 8 years ago and married a Tica (Costa Rican) several years later. They now ran the B&B in Nuevo Arenal together and had 2 children, 2 dogs, and 1 cat who all graced the property. Note: it is a very family friendly and pet-friendly property. Several of the other guests had children, who often played with the managers’ children making a ruckus as they ran around the property (even around the guest area). Apparently, Dirk and his wife rented the lodge from the same guy who owned the land that the Ceiba tree was located on. We wondered what their margins might be since they didn’t own the property themselves.

Since we had emailed Dirk in advance letting him know that we might not make it in that night (but to please hold the room!), he did not have any dinner available. Instead, he recommended we head in to Nuevo Arenal to an Italian place. We did just that, but were not sure it would still be open because Google Maps said it would close at 730PM. The name of the restaurant was Lot Platillos Voladores.

We rolled in around 7PM, and the place was packed – but the owner said to hang tight and she would figure something out for us. Pretty soon, we were seated beside an older heterosexual American couple from Northern California and a gay British couple who lived in London to share our meal with. Everyone at the table welcomed us in warmly and the owner was kind of your typical Costa-Rican Italian grandmother type, overflowing with salutations and words of comfort. We also learned that the restaurant had a take-out service, which we tucked away for later (even though we wouldn’t end up using it). Incidentally, the restaurant was themed around UFOs and aliens, which we thought quite strange. 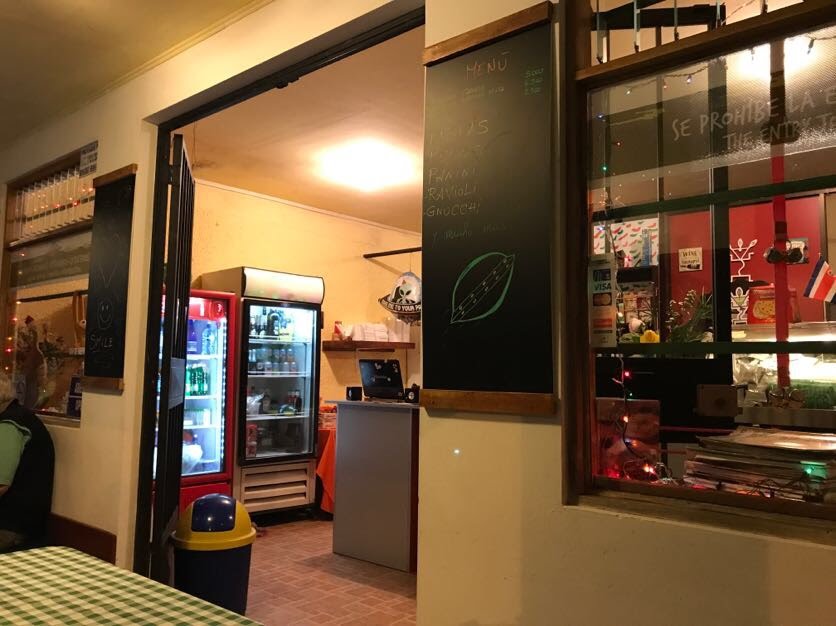 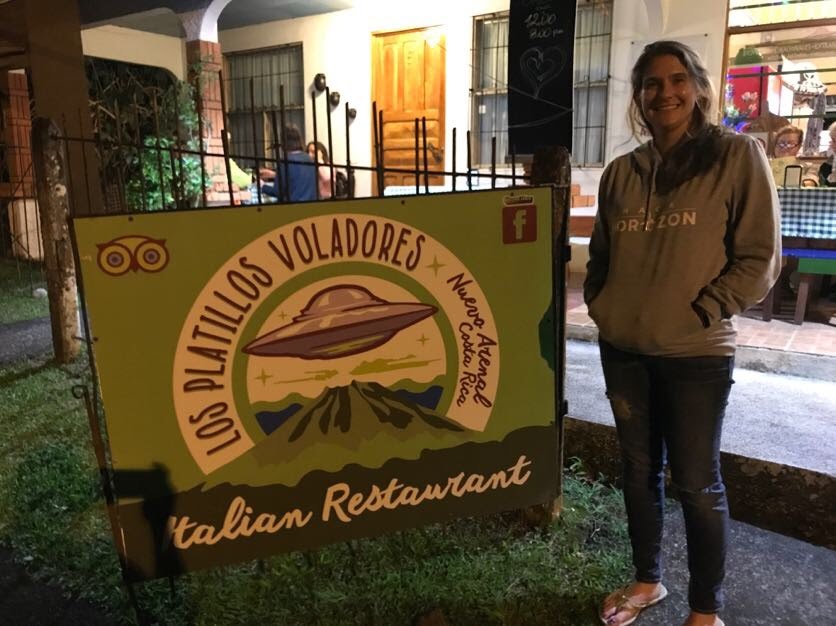 For dinner, we ordered a Greek salad and some garlic bread, followed by a pizza – half pepperoni and mushroom and half vegetarian. The owner allowed us to make a few modifications and substitutions no problem. It was all delicious, and just what we needed that night. As we ate we chatted with the other couples and absorbed some tips about Nuevo Arenal as well about the greater Lake Arenal and La Fortuna areas in general. We learned a little about Nuevo Arenal. Apparently, this part of Costa Rica was less crowded than the beaches, and also less developed and touristy – so it sounded like we chose well. Additionally, we again heard that Nuevo Arenal was the nicer of the places to stay and that La Fortuna was less interesting. We also shared travel stories (seemed to be a common theme on this trip) and talked a little about Belize (the American couple had just been there) as well as South Dakota and Utah (the British couple had traveled there a few years ago).

With our bellies full and our minds piqued, we couldn’t wait to begin exploring Nuevo Arenal. Around 9PM we headed back to the lodge and went to bet about an hour later. We expected to be waking up with the sun once more as the curtains were flimsy and transparent. Moreover, we soon learned that Costa Rica was geared towards early-risers due to the animal activity at dawn (similar to what I experienced in the Amazon). This world is just not made for us night owls.