I woke up at 7AM after a full 9 hours of uninterrupted, much needed sleep before we headed out to Bahla. Even though this is a “vacation”, I was still pushing myself to see and do a lot (because Oman had a lot to see and do in!), and therefore became sleep deprived. I could barely keep my eyes open the previous day driving to Wahiba Sands and even Nizwa. But, today was different due to the refreshing rest. I met Sulaiman for another light breakfast even though there was a full array of English and Omani foods to choose from, and of course tea. The food was a lot better than I would expect on the top of a mountain.

This was my last day in Muscat, and we again spent it wisely. We unwound back down the mountain at 830AM, taking a few stops at the same places we stopped the day before because the morning light provided a lens through which to view the natural beauty. Not only that, but villagers were working their shared land and there was more activity and life in the morning.

We continued driving for about an hour to Bahla, which we reached by 930AM. Bahla was the home-town (wataan) of Sulaiman, and we climbed up some old ruins and he pointed out his childhood home amid a burgeoning city-scape again blanketed with date trees. 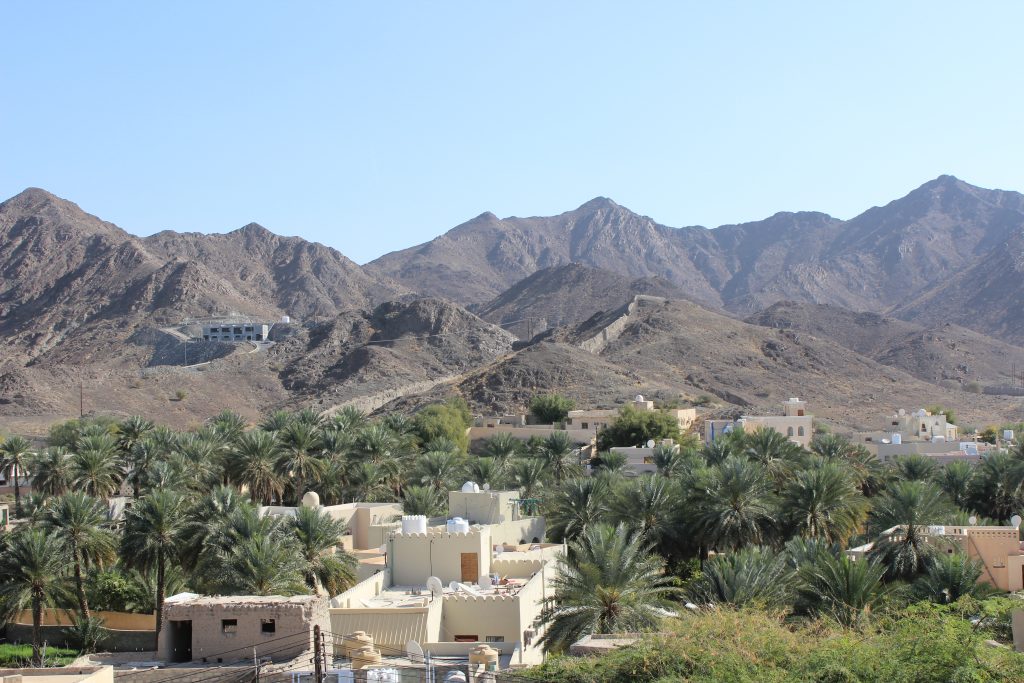 It is also called the City of Magic – Madinat al-Sehr – due to the folklore around black magic (jinn) in its fabled history. For example, there’s a story around the city wall being built in one night by the ruling lady with the help of a jini in order to protect the city and ward of attackers. People don’t believe this still today, but the legends are fun – and all Omanis seem to know that there’s a lot of “magic” in Bahla (as I came to find out from a group of 20 somethings in Salalah). 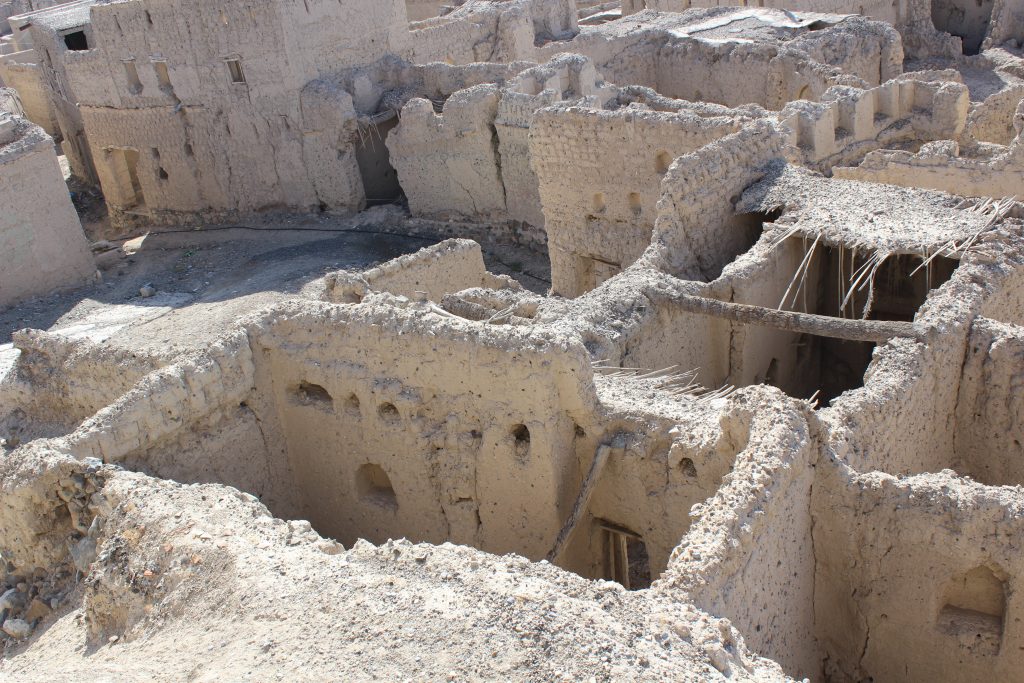 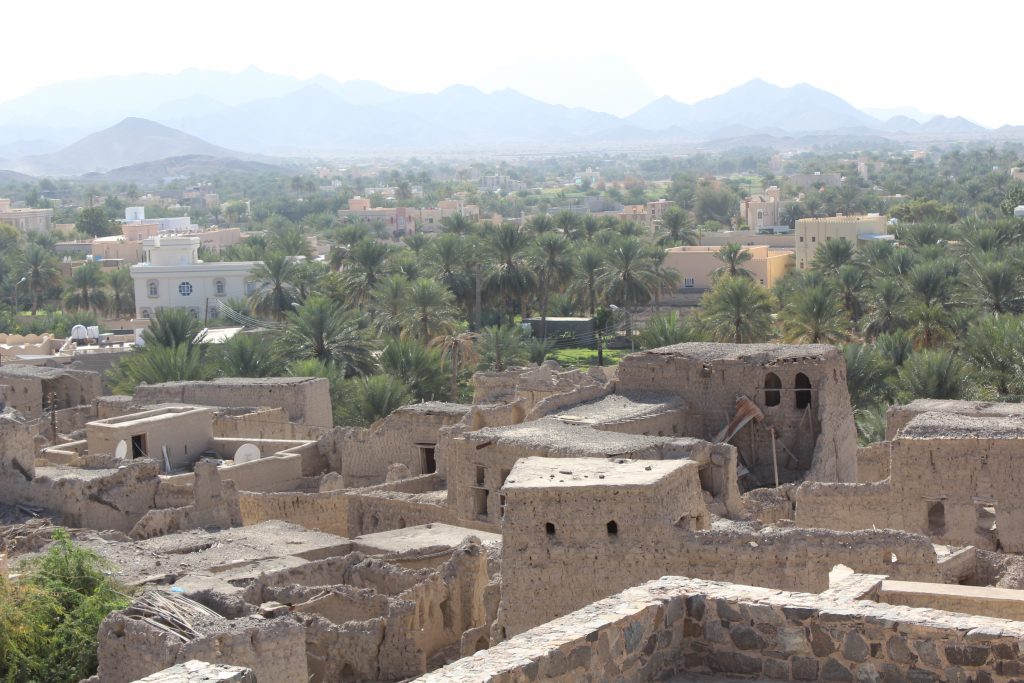 The Bahla Fort was built in the 5th century AD, was a UNESCO heritage site, and was very well maintained (although empty, unlike the Nizwa Fort). 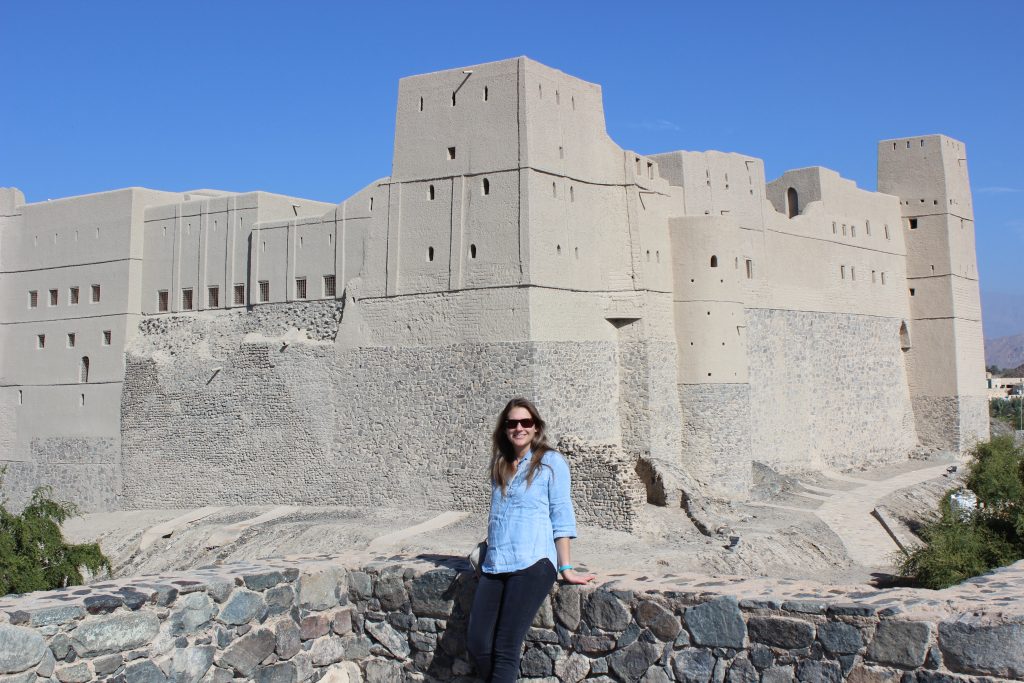 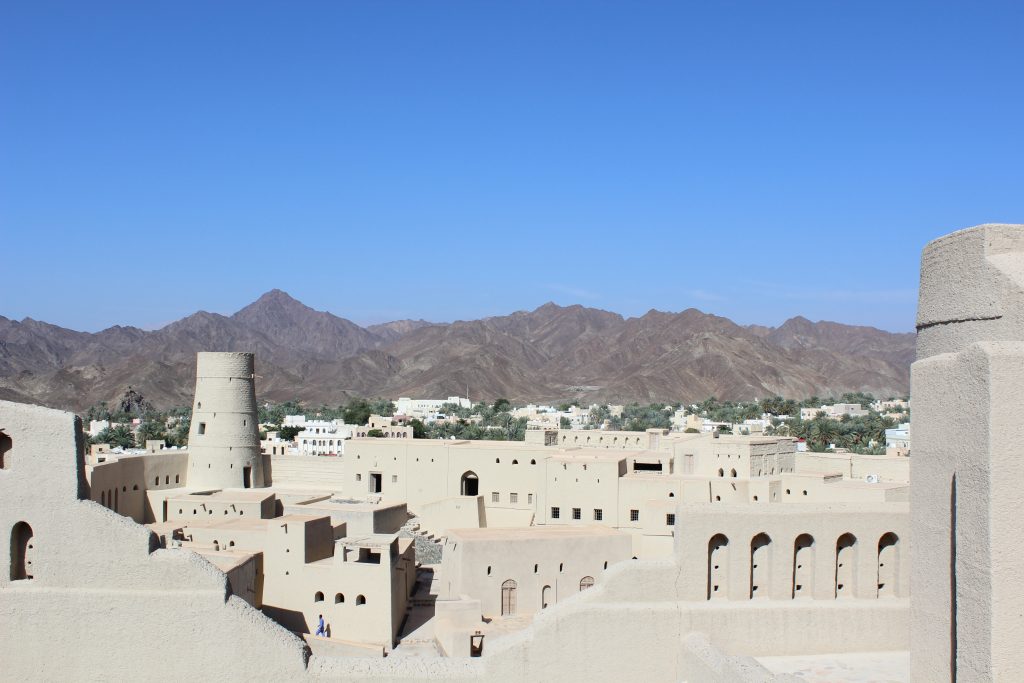 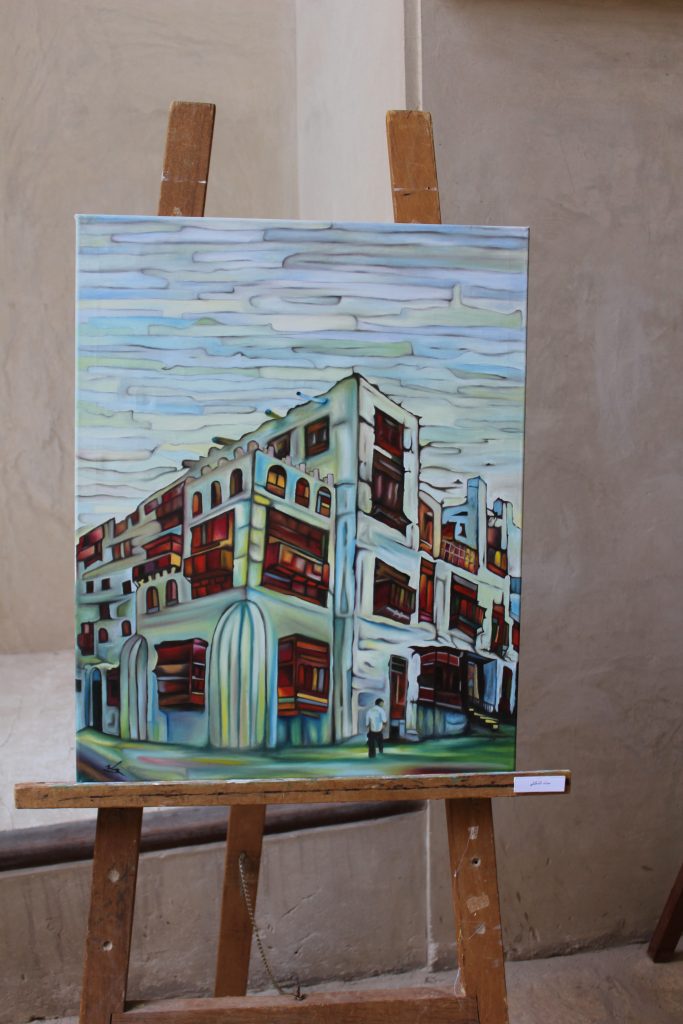 I explored for a bit and even found an exhibition of modern art that featured local artists in a competition of sorts (apparently traditional over contemporary was favored in the Omani culture, as finding modern art was very rare).

After the Bahla city center, we stopped by a date packaging factory and I made some purchases of sweets for a very fair price. The shop manager threw in a package of sticky date sweets for free, again proving the hospitality and kindness of the Omanis. I can’t say enough about them and their culture.

Our next stop was to look at a new type of hotel that Sulaiman and I had discussed at dinner the previous night. We were talking about business and of course came to tourism in Oman, and which areas were ripe for growth and investment.

This is a common conversation topic I always broach with my local hosts and guides while in a foreign country. We talked about a few gaps in the market:

So continuing on this theme, the hidden sightseeing stop actually made up #4 on the above list – an experiential village concept in Bahla where locals lived in a village compound and guests could stay there (like a hotel) as well.

In the compound, there were workshops that the villagers used to make things to sell and regular every day living facilities.

The tourists would have the benefit of seeing how locals lived and also interacting with them.

It was partially completed, and would be finished in 2-3 years (read: 5-6 years), inshallah. I suggested the addition of an outdoor garden/bbq pit area where guests could sit and enjoy the weather, smoke shisha, and talk. I told Sulaiman (and really meant it) that this could really be something but it totally depended on marketing, since it was in an obscure area of a not-quite-as-famous Omani city (Bahla).

The final stop was to an animal park on the drive back to Muscat in the Nizwa area to see the Omani oryx (kind of like an antelope), native to this part of the world. Perfunctory camel also posing in the background 🙂 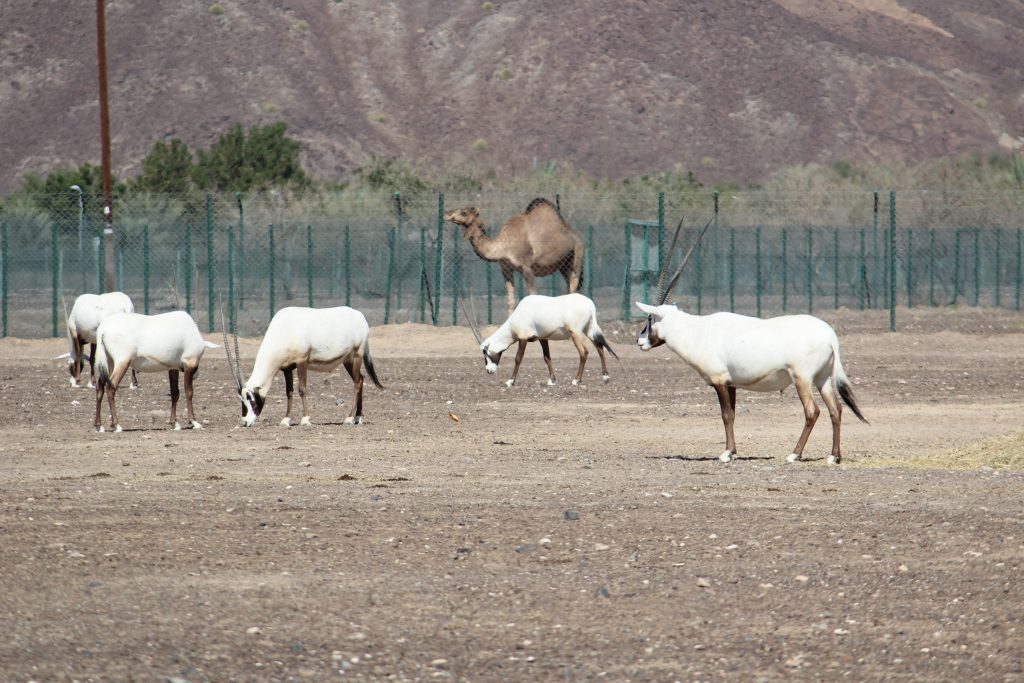 The drive back to Muscat from there took about an hour, winding again through the mountains and stopping for a final ATM run and some Omani bread (one with honey, the other with cheese this time) and of course tea. Sulaiman dropped me off at the airport with plenty of time to spare. I was sad to go and to say goodbye to Sulaiman, so we said till next time – Ashoffak qaribay. I gave him nearly a 25% tip on top of the 330 OMR we negotiated, and it was worth every penny.

After printing my boarding pass at the chek-in counter and getting through security, I finally figured out how to crack the free Wi-Fi but only if you have SMS service enabled at the Muscat Airport – you can read about that here. I also chatted briefly with another Saudi in an elevator and he asked me “How’s Trump?” to which I replied “Awful” – we both chuckled. 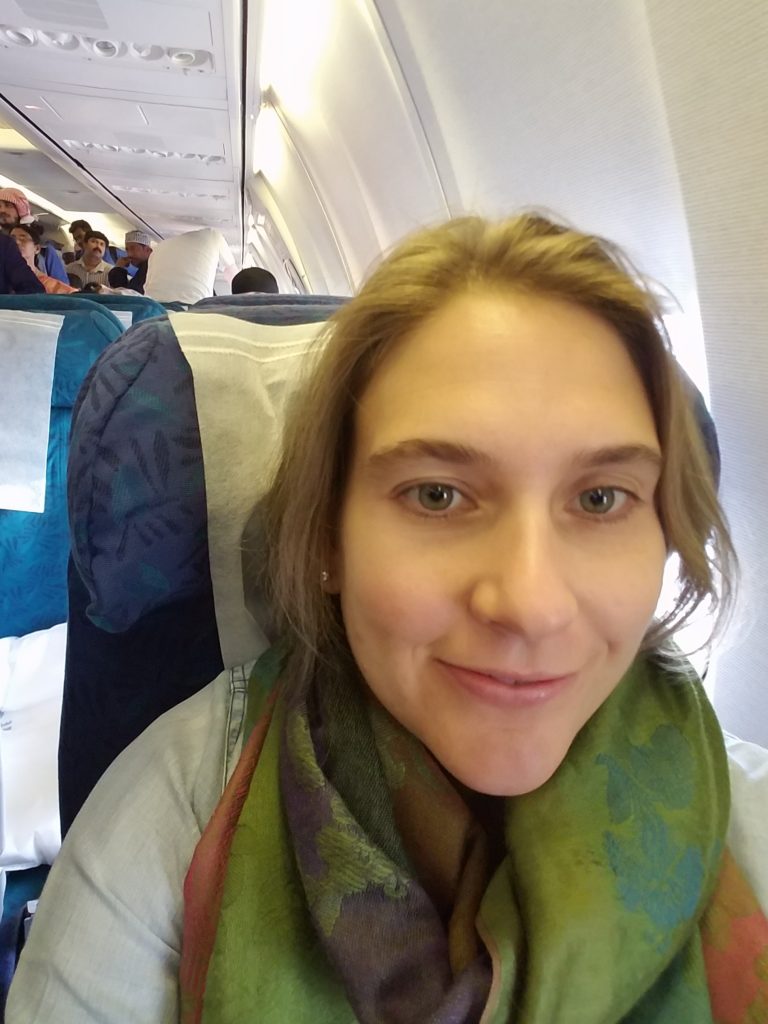 My final Oman Air flight to Salalah boarded on time, but then we sat on the runway for an hour due to the navigational system needing to be replaced. I made friends with a Filipino named Reggie sitting in the aisle seat next to me (nobody in the middle). He worked at a hospital in Salalah, and had recently moved their from Muscat. He was heading back to work after spending some time in the Philippines with his wife and son.

We agreed to meet up in Salalah for dinner, most likely on Friday night. He also helped me navigate the taxi situation coming out of the airport – fixed price going to Salalah for 10 OMR. Huge ripoff (that’s about $25 USD) for 6 km.

At the Hilton Salalah, I was given a sweet room upgrade with a double balcony facing the Indian Ocean. 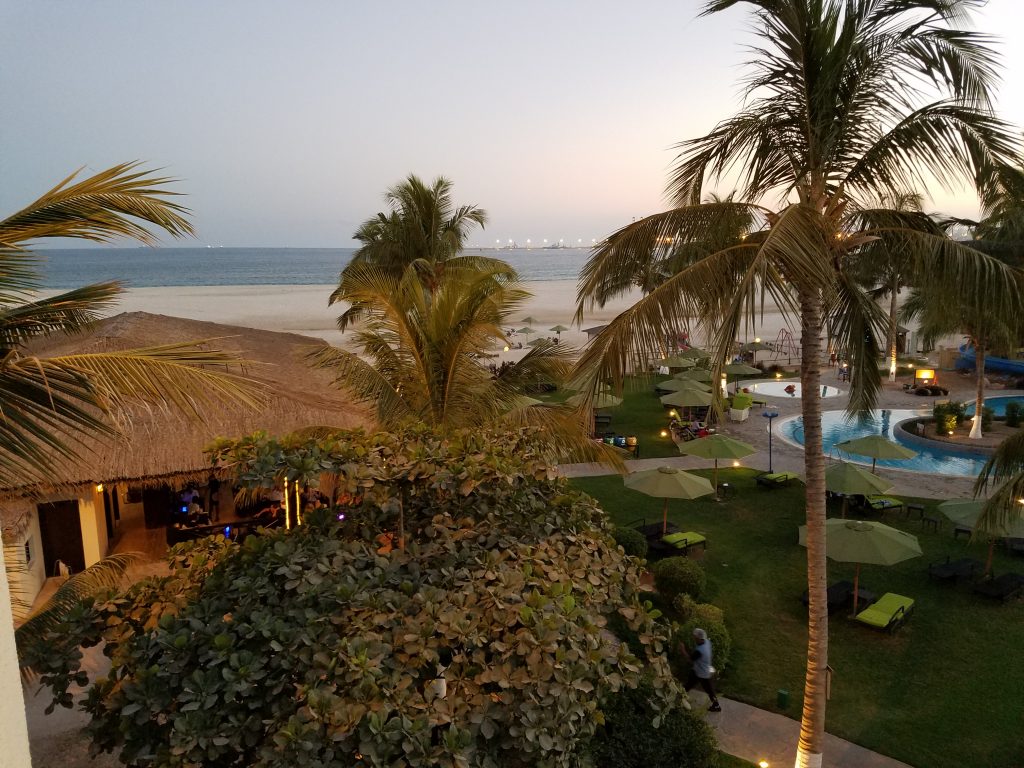 And a welcome basket of fruits and treats, which I promptly gobbled up. Then I went to the gym, which turned out to be adequate but not very nice with a surprisingly mixed male/female cardio floor.

I was able to get some work done and then settled in to a later dinner around 10PM at the outdoor grill downstairs, after inquiring about hiring a tour guide to get to the Yemeni border. It appears I can get to the border but that’s it without a visa, and as an American, at this point with Trump’s inanity getting the visa isn’t possible either. And, no guide really wanted to take the risk of bringing me even slightly across. So the plan would be to get to the border on Saturday as part of a Salalah West and mountains tour, but stop at the border and turn around.

At the Palm Grove Restaurant on the beach, the service was wonderful, the view of the lights on the water and the beach magical, and the ambiance serene. Hilton really knows how to get it done while still incorporating the local culture. I ordered the Palm Grove salad which was a really elaborate salad including 10 locally oriented ingredients. Then I ordered and Arabic lamb and rice dish called kabouli.

I continued to work after dinner and crashed out around 2AM.

One thought on “Bahla, Oman and reaching Salalah”