A few weeks ago, my boyfriend Brendan and I enjoyed an all-expenses paid trip to Vancouver for 5 nights for the Travelport Star Awards trip. My employer, Travelport, selected me as one of the top performers of 2016 along with 31 other people, and this trip was the reward for all of us. I have to say – it was pretty rad. First of all, I’ve never been rewarded like this through work ever before (previously, I had thought that working hard never got noticed or rewarded). Secondly, it was white-glove, first-class treatment and it was easy to get used to. I only hope that Brendan and I can deign to stay at 3-star hotels again when we take our next trip 😉

We departed from DEN Thursday afternoon (Oct 5, 2017) on non-stop United flight 323 to Vancouver at 1140AM. We left a little early to check our bags and to have a nice pre-trip breakfast at Elways in the United terminal (Terminal B). PS: if you want a good review of the DEN airport with #layovertips, check out our sister blog tripchi here!

The flight was easy despite not having an empty middle seat and having to shuffle. We arrived at YVR and after we cleared immigration and proceeded to our baggage, prior to customs, and airport official was waiting for us with a “Star Awards” sign by our luggage belt. We were the first of 5 other Travelport Star Awards Denver couples who were joining us the for the trip. “Wow”, we thought – the white-glove treatment started at the airport!

And, as we emerged from customs, we were promptly greeted by the Travelport organizing committee and our tour guides from Rare Indigo. A luxury bus then magically loaded all of our stuff without us doing a thing and whisked us a way to downtown Vancouver, where we’d be staying at the Rosewood Hotel Georgia. Our stuff was again unloaded and we quickly were checked in at the desk and soon in our room, 618, right across from the elevator. At first we were worried but once we got in to the suite, it was clear that noise wouldn’t be a problem. 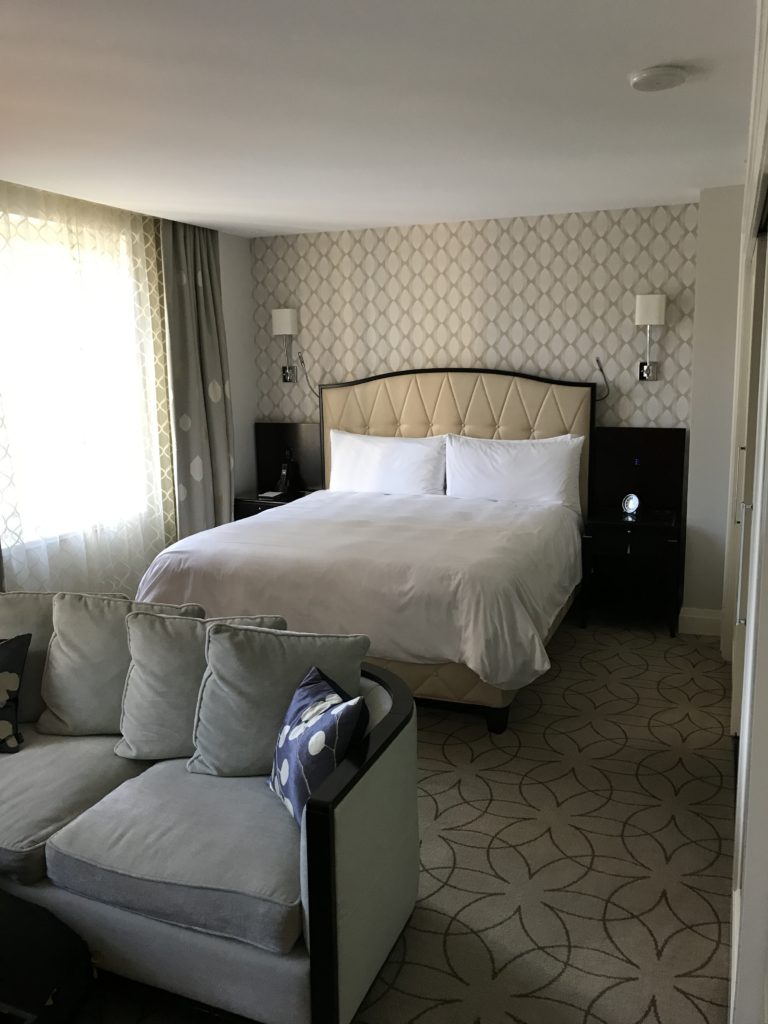 The bathroom was about the size of my bedroom at home. 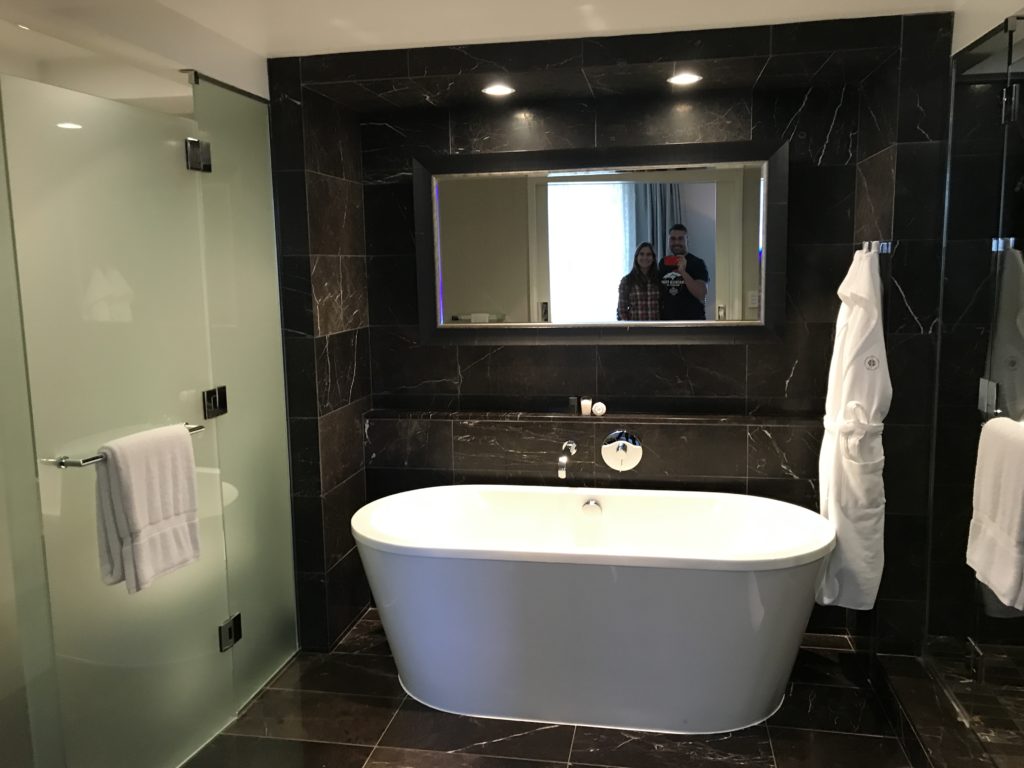 Pretty soon after we arrived (around 4PM), this showed up for us…Yum! (and what a nice touch!) 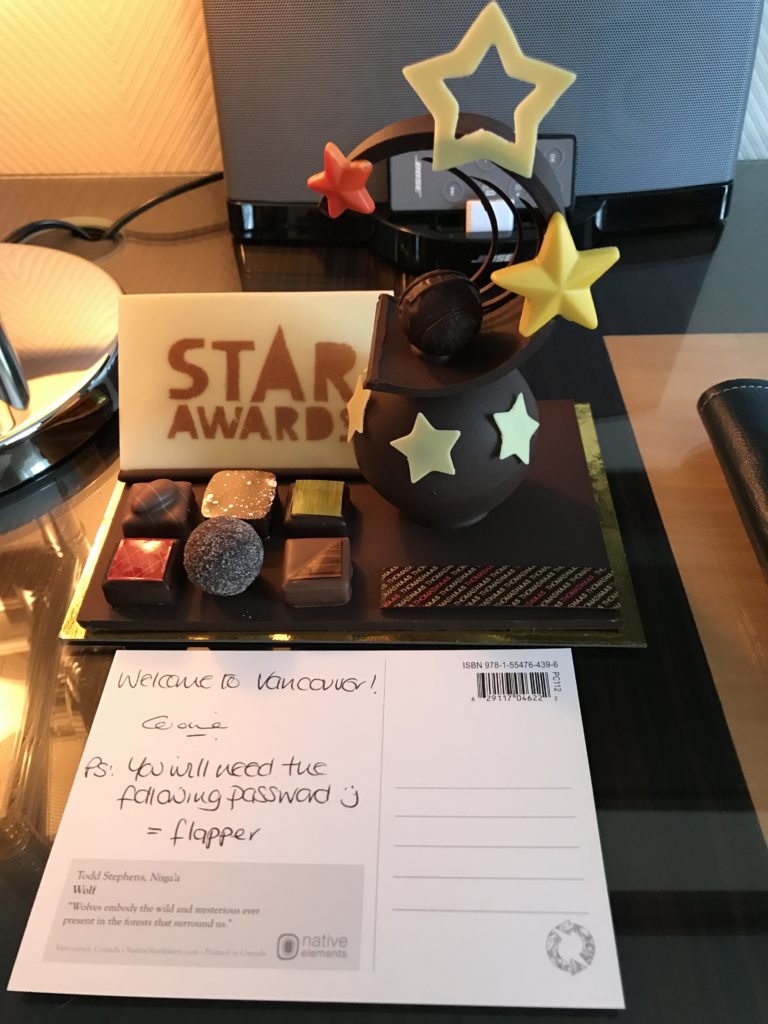 Dinner was around 7PM at a 1920’s era prohibition restaurant accessed through a hidden street entrance on the side of the hotel (hence the code word above). We had a few hours until dinner so I hit the gym and showered immediately so we had time to hit the Gastown district and see the old steam clock. This was Brendan’s laptop wallpaper for the past few months so he had built it up a bit. It turned out to just be a small clock that had steam coming out of the top. 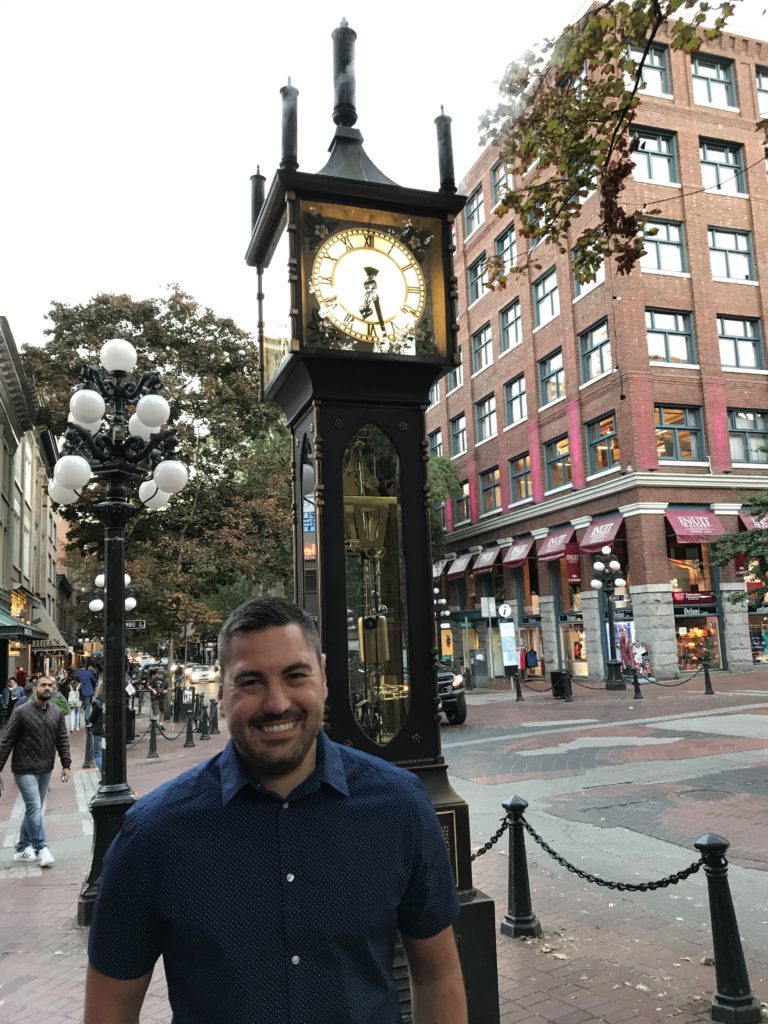 Gastown was about a 0.5 mile walk from our hotel – we were finding the accommodation location to be very central. However, we didn’t leave very much time to make it back (even though we had already changed for dinner), so we didn’t get to see as much as we wanted at a leisurely pace. On the way back, we walked through the only apparent area with poverty, located on the outskirts of a park.

Dinner and cocktails was held at Prohibition, and it was decked out to a 1920s part theme – including casino games, dressed up hostesses (and Travelport personnel!), and speakeasy themed cocktails. The cold food selection was outstanding, with an array of salads and spreads, but the hot buffet was meat (fish and chicken and beef) and potatoes – one of the many of these “meat and potato” meals we would be consuming during the trip. If the only valid complaints werethe lack of diversity in the meals, and itineraries that catered to morning people (which we are not!), then it must be a pretty amazing ;). Notwithstanding, I was starving and scarfed down some dinner. 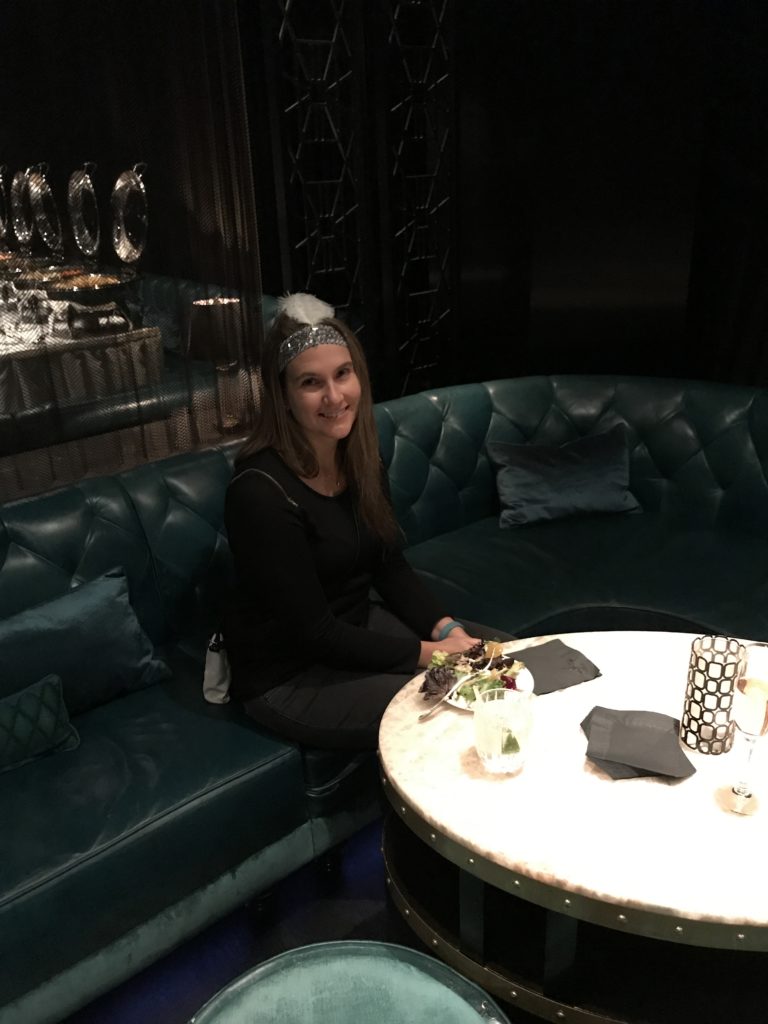 Brendan had a couple of old fashions and I had some gin and sodas as we enjoyed gambling, catching up with colleagues I had never met before, and enjoying the costumery.

We were tired so we packed it in around 930PM – others were still partying hard. We at least got to sample the delicious desserts! But, we had our earliest day the next morning (whale watching from Victoria, British Columbia). Apparently there was an itinerary that was supposed to have been emailed to us explaining the timings of everything – but we didn’t receive it so we found out from the organizers on the first night about the early next morning (745AM start)

A great first day, and more to come!