We had a busy previous day getting to and exploring Meeker – next up would be Trappers Lake. SO, the next morning we woke up pretty late and took our time heading out for breakfast. I did some yoga and read a bit on our screened in porch at the Green Cabins.

We finally headed in to Meeker for breakfast at the Meeker Café around 1130AM and got ourselves some grub. I had the American breakfast, and it was huge – enough to get me through until dinner even after a full day of hiking and fishing. I heard the breakfast burrito was also delicious.

We again had a chatsky with the waiter, who was another Mexican, imported in to the town by the very same Guadalajaran restaurant magnate. His name was Fernando, and he had been in Meeker now for at least a year, because he talked about loving to ski and going to Breckenridge and Vail in the winter.

We were again surprised by the hotel bizarreness of the situation, but at the same time thought it probably was a great opportunity for these kids. We were also impressed at how well they spoke English and how much they looked like “typical American kids” already. They were making a go at fitting in.

After breakfast we headed to the drug store, and I got to check out the old fashioned soda fountain. The one in Chugwater looked better, and it was too early in the day for ice cream so I of course I can’t verify that statement.

local outdoor store, Wyatt’s Sportscenter, on the main highway in Meeker to get the scoop on where to go fly fishing. The guy at the desk was helpful and gave us some printed out directions on where the best places to go were, and told us that the fish were particularly jumping today at the Sleepy Cat fishing area, as well as at Lake Avery located back towards Rifle. Since we already had a plan to go to Trapper’s Late and Little Trapper’s, we decided to also check out Sleepy Cat since that was in the same direction.

We bought some flies that represented the local bugs that the trout we would be fishing ate – ants, grasshoppers (black and green) – and we were also prepared to use our wooly bugger and other flies that we had brought from Denver. Side note: this was just my second time fly fishing ever, having gone the previous weekend to Cheesman Canyon. Fly fishing is a whole new world that’s been opened up to me – the same thing happened when I first learned to golf. I realized quickly that it had a cult-like following and is way more complicated than I could have ever imagined. It’s detail oriented, matching the flies to the fish, takes extreme patience, and a delicate hand to lightly flick the line back and forth, imitating the movement of the fly/bug.

It was a 51 mile drive to Trappers Lake on a winding road that was only paved for half the way, turning in to a country gravel winding road around mile 30. It was a gorgeous drive – called the Flat Tops Scenic Highway – Highway 8. 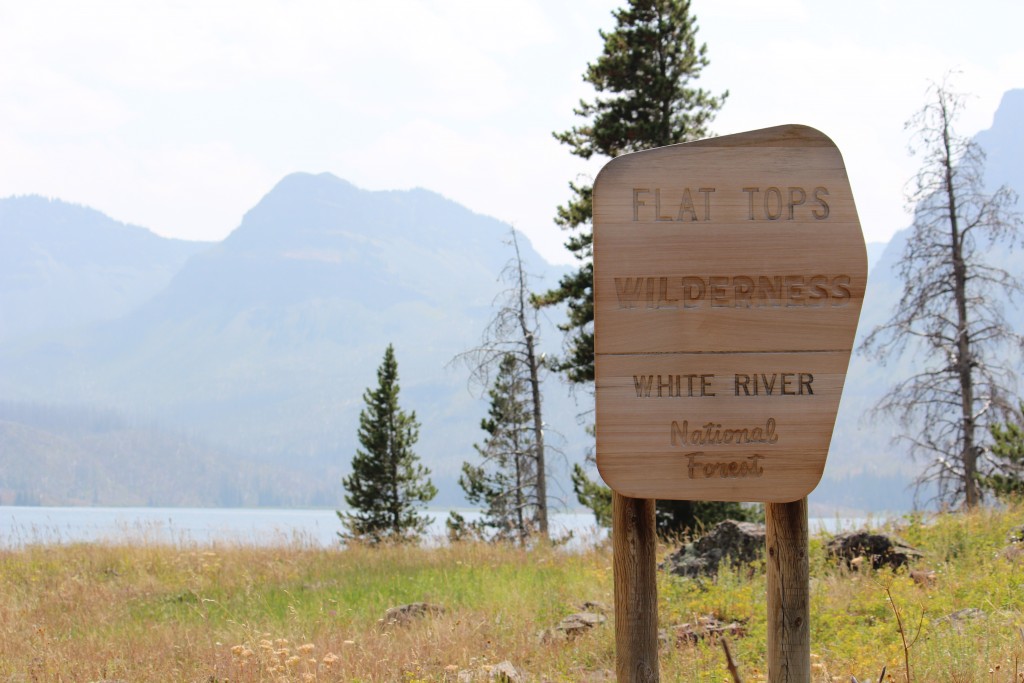 Drive to Trappers Lake on the Flat Tops Scenic Highway

On the way we saw some horses, donkeys, and free range cattle even on the roadside. It was strangely reminiscent of India.

We passed by Sleepy Cat and decided to leave that for the drive back, pressing on to Trappers.

Three eagles also appeared overhead for us, but this is the best I could do as far as photographing them:

We took a quick stop at an aqueduct that some locals had turned in to a water slide for their children. “You have to be careful of the re-bar though – and stay to the left side” he warned us, when we asked if it was safe. But hey, kids are resilient and limbs can grow back.

We also passed by Ute Lodge, where we had almost booked the Yurt (another one of Barb’s recommendations). It looked nice, and much closer to Trappers Lake than the Green Cabins, but obviously farther from Meeker and farther from food.

Also on the drive, we noticed large swaths of forest that had been killed off – we couldn’t tell if it was the beetle infestation or whether it was a forest fire, or a little of both. Some of the mountains looks quite bleak without the trees intact, and led to a desolate, eerie feel of the landscape in certain patches.

We reached Trappers Lake parking area around 3PM and put our gear in our packs and hiked it in. The lake was only about a quarter mile walk, but we wanted to make it to Little Trappers Lake, which sounded like the fish were jumping. According to some fellow fishers, it was about a 1.5 mile hike in. It sounded doable, so we set off.

We passed by Trappers Lake on the way. 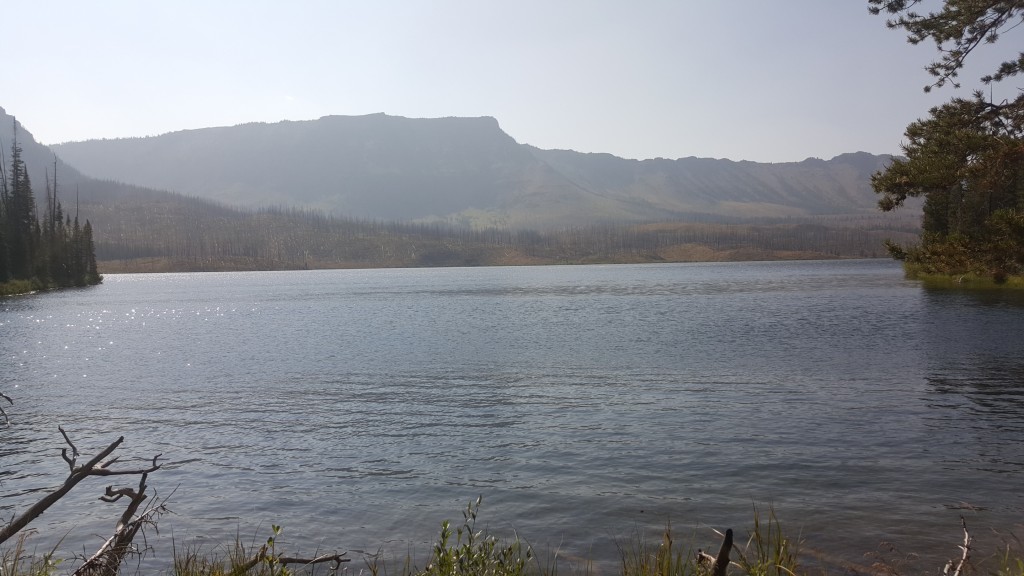 After about 2 hours of hiking 3-4 miles and NOT finding Little Trappers Lake, we agreed that we probably took a wrong turn and gave up on that course of action, heading back to Trappers to find a good fishing spot on the main lake.

Of course I took some good pictures of foliage and flowers 🙂 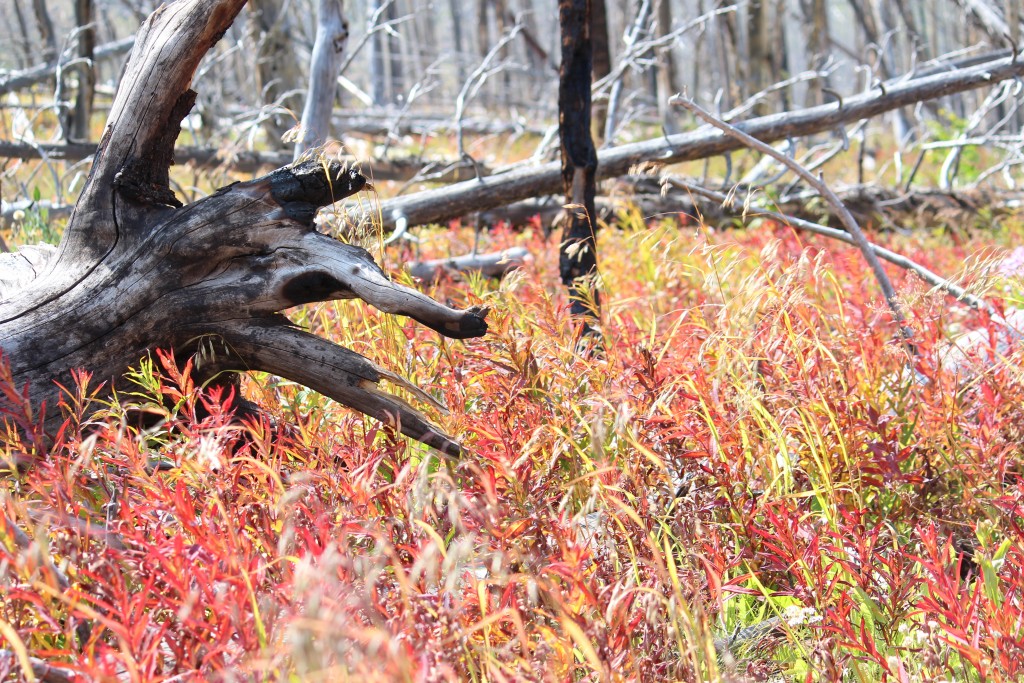 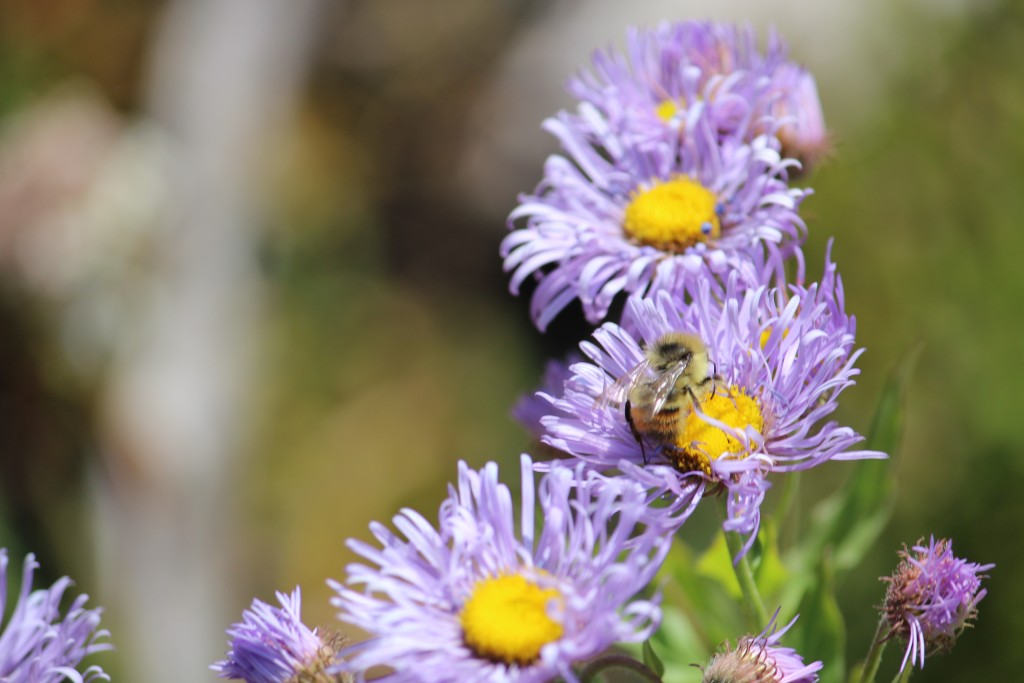 It was a good hike nonetheless, and we passed over several streams (getting our feet soaked) and more patches of dead trees on the way. 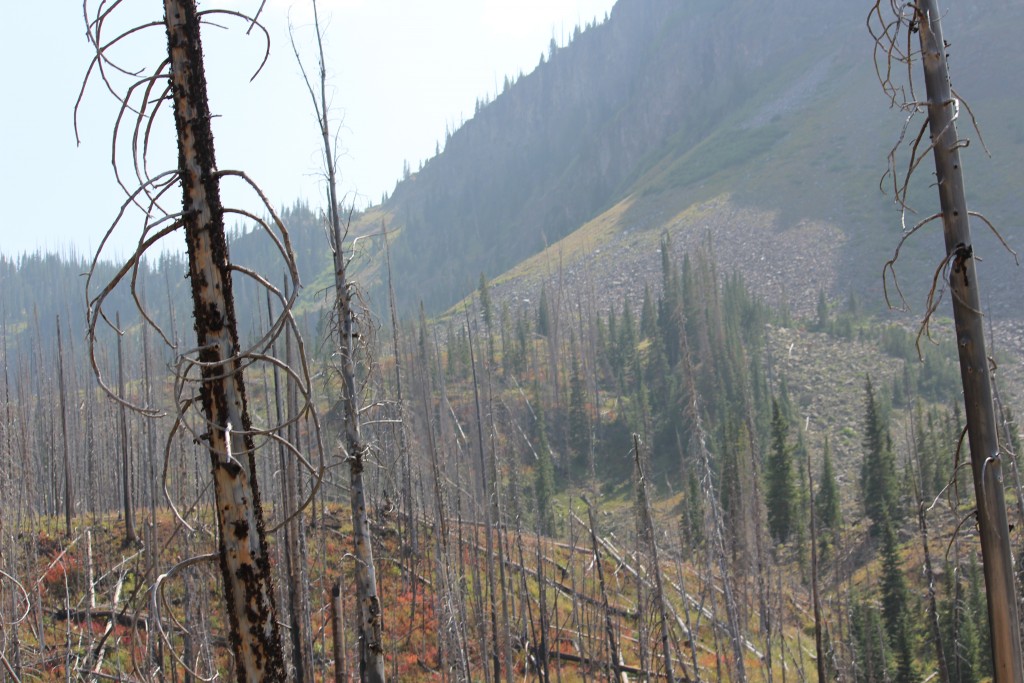 We found a little cove that we nicknamed Little Finger after Lord Baelish in Game of Thrones. We hiked down the hill to the shore and made camp, setting up the rod and fly. The lake had a nice sandy walk out with very few rocks which made it easier that Cheesman the week before. I mostly watched this time around and was happy to roam around half-in the lake, and get some some on a nearby log. 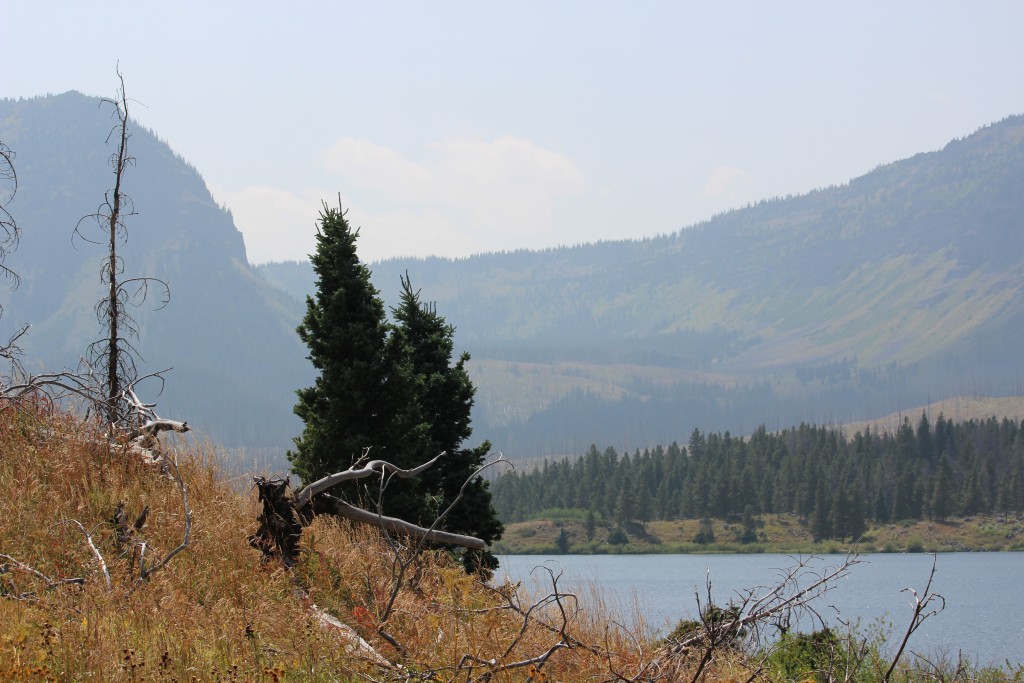 After a few hours of not catching anything, we decided to head back to the car, and check out the other fishing spot, Sleepy Cat, on the drive back to Meeker. On our trek back, we figured out where we should have turned off for Little Trappers Lake – we had veered to far South. Little Trappers Lake was located towards the East.

After 45 minutes back in the Acura we reached Sleepy Cat.

Dave set out with his rod and I pulled up a chair to veg. Then a bee had the audacity to sting me. On the ear no less! I hadn’t been stung by a bee in 20 years or so – it was a very weird feeling and hurt like a mofo. Luckily I had a bee sting relief pad in my car’s First Aid kit. Always the Girl Scout. And through all of this chaos, Dave actually caught a fish!

Here he is reeling it in.

And here’s the end result. 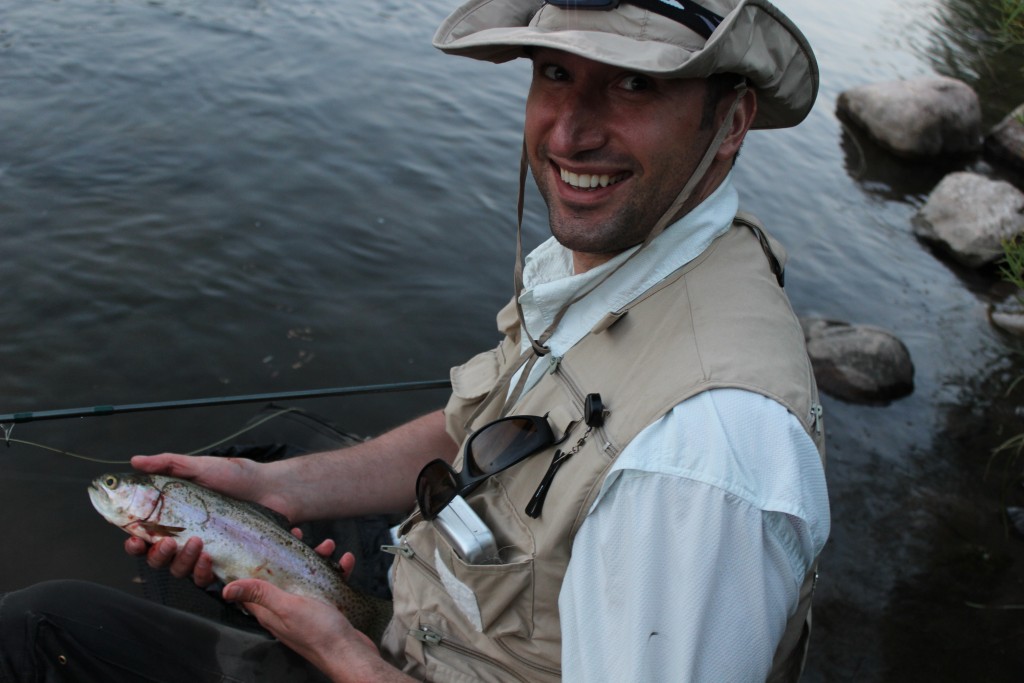 The fish got a little bloodied up since the hook snared him in the gill, but we were able to release him and watched him swim-hobble away. We had mixed feelings about this experience, but were happy that finally something was caught.

It was a Rainbow trout and was quite the looker.

It was already dark, so we headed back to the Green Cabins to quickly change and made it in to Meeker by 9PM for dinner. Everything was closed except for the biker bar Chopper’s, which didn’t serve food. The bartender said the only place that would be open for sure would be the Mexican Restaurant, but to check Holliday’s around the corner just in case.

Holiday’s was closed, so it was Mexican food again. This time we sat at the bar with all the Mexican staff and chatted while watching futbol (soccer). We had the same waiter, Mark, as the night before. Neither of us were thrilled at the prospect of eating mediocre Mexican again – so we ordered light; just a salad and a quesadilla (and another shot of tequila, although not as good as the Herradura we had the night before).

It was fun to see all the Mexican kids hanging out, having just got off work. Our friend the rollergirl rolled in (literally) and joined the party.

We also decided that if we ever moved here, we would open up an Indian restaurant and call it the Indian Restaurant.

We headed back to the Green Cabin around 10PM, checked out the stars again, showered up, and passed out.

It was a long day in the sun, fishin’ and hikin’ and shit-shootin’. This is what humans are built for.

One thought on “Trappers Lake”