Alex and I decided to take a weekend road-trip out of town, considering we had a 3 day weekend (MLK Monday, thank you government!) – and go snow-shoeing in Estes Park for the very first time. The plan was to drive from Denver to Estes Park, CO Sunday morning, show-shoe in the afternoon, spend the night, possibly snow-shoe again Monday morning, and make it back to Denver again by early afternoon. A quick there-and-back trip with an overnight.

We met the night before at the REI on Platte Street in Denver to gear up. Neither of us had ever snow-shoed before, so we had no idea what we were doing or what to expect. That was half the fun. Luckily, the nice folks at the flagship REI were more than happy to educate us on the art and science of the snow-shoe, and of course sell us some at the end of the day. Renting was $24 a day (around $30 if you weren’t an REI member), and buying some low-end all-terrain snowshoes for my body size/weigh (petite) was $170 – and it included poles and a bag. That meant that buying the gear would be cheaper than renting if I went snow-shoeing more than 8 times in my life. Having never been snow-shoeing, it was a risk; but, I assumed that snow-shoeing was probably a lot like hiking in the snow. I loved to hike; was looking for a lower impact winter sport that my still-healing ankle could tolerate; and something convenient that I could do almost anywhere on a snowy day. So, I took a guess that snow-shoeing would be my next new sport, and went ahead and bought them. Alex bought a packaged deal as well – snow-shoes, poles, and a bag. These were the perfect beginner packages to start of off right snow-shoeing in Estes Park. 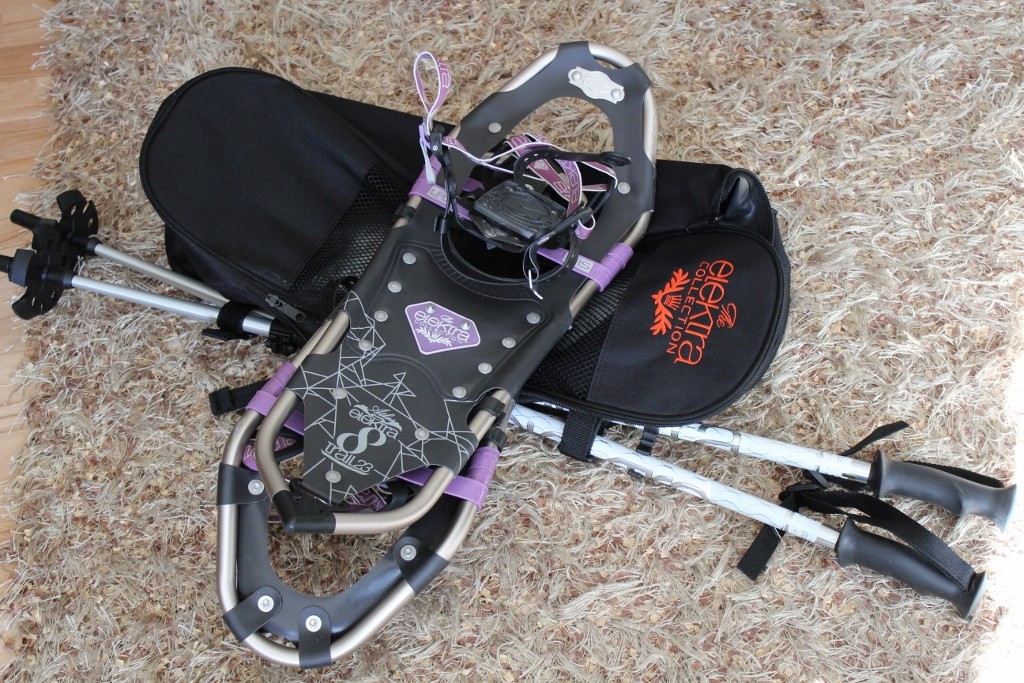 After REI, we went to dinner at Lola in the Highlands, and over delicious Mexican American fusion food, discussed our plans for the next day.

We set out ambitiously for 10AM, but in truth didn’t leave until 11AM. Alex met me at my place and we decided to take my trusty Acura RDX to the mountains. After stopping for gas, we made it North on I-25 to the Lyons/Estes Park cut-off (I-66) on Exit 243. 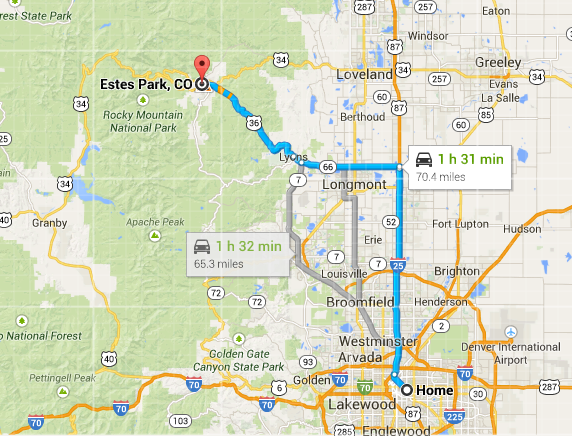 Directions for Denver to Show-Showing in Estes Park

We got to the Estes Park Visitor’s Center by 1230PM – had a brief pit stop and a chat with the desk about best places for snow-shoeing in Estes Park and some good restaurants for dinner and breakfast, and were quickly on our way again.

We entered the Rocky Mountain National Park around 1245PM and used the annual that my parents purchased for me when they came to visit me in October 2014 (side note: we visited Estes Park for leaf-peeping and ended up hiking the Bear Lake Trail). The park ranger let us know that, because of the good weather (in the 60s on this day), there were only a few trails that still had enough snow on them for snow-shoeing – and they all were on the Bear Lake branch. Since I had already hiked Bear Lake, she advised us to check out Glacier Gorge as an alternative. We made it so. 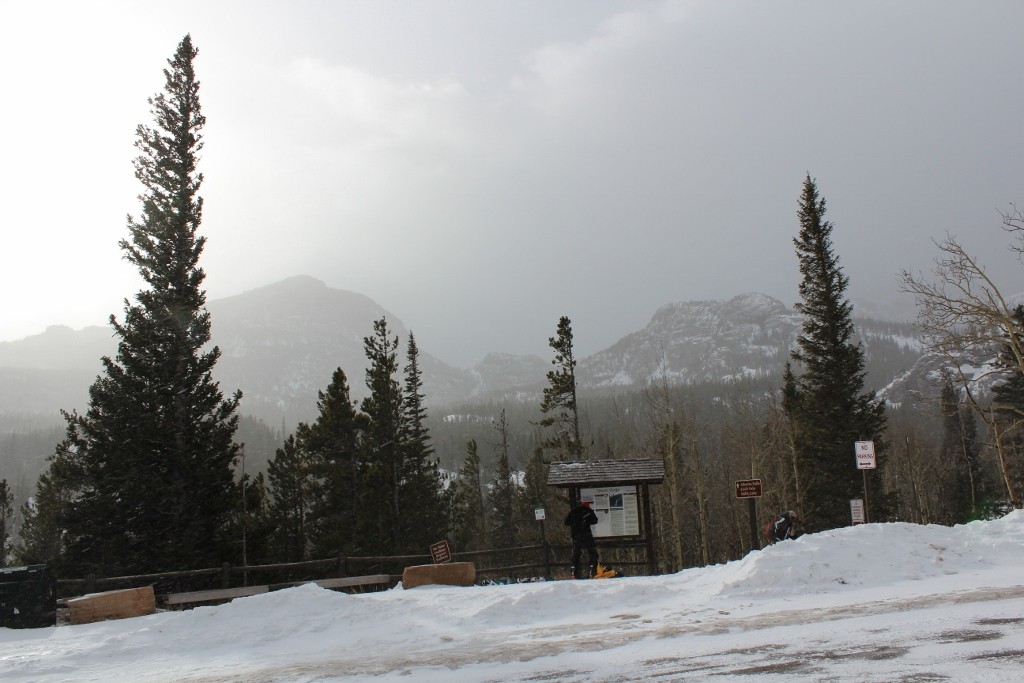 We parked at the Glacier Gorge parking lot around 1PM and spent 15 minutes gearing up and figuring out these newfangled snow-shoe contraptions. Luckily there was a seated area at the beginning of the trail-head that we used to unceremoniously strap-on our snow-shoes like n00bs. It took a few minutes to figure out the strapping and locking mechanisms (made me think of the pop and lock dance craze). We asked a couple of inbound hikers whether the snow-shoes were even necessary and they said they were only after the first 1.5 miles. Oh well, we had them on already – we were committed.

And so we were off!

The terrain was generally flat, gently sloping up and down. We were inside the treeline, so all we could really see in every direction was trees and snow — very few views of clearing or mountains.

It really was like hiking in the snow! But boy, was it hard when the snow got soft and deep. The snow-shoes, as designed, kept us from sinking in too much, but we still had to use quite a bit of force to lift the shoe out of snow onto the next step. We used muscles we didn’t even know we had.

After a mile or so of snow-shoeing in Estes Park, we came upon a sign-post. We could either go to Bear Lake and the waterfall (which I had already done in the autumn), so we decided to take the 3.5 mile path to Sprague Lake. 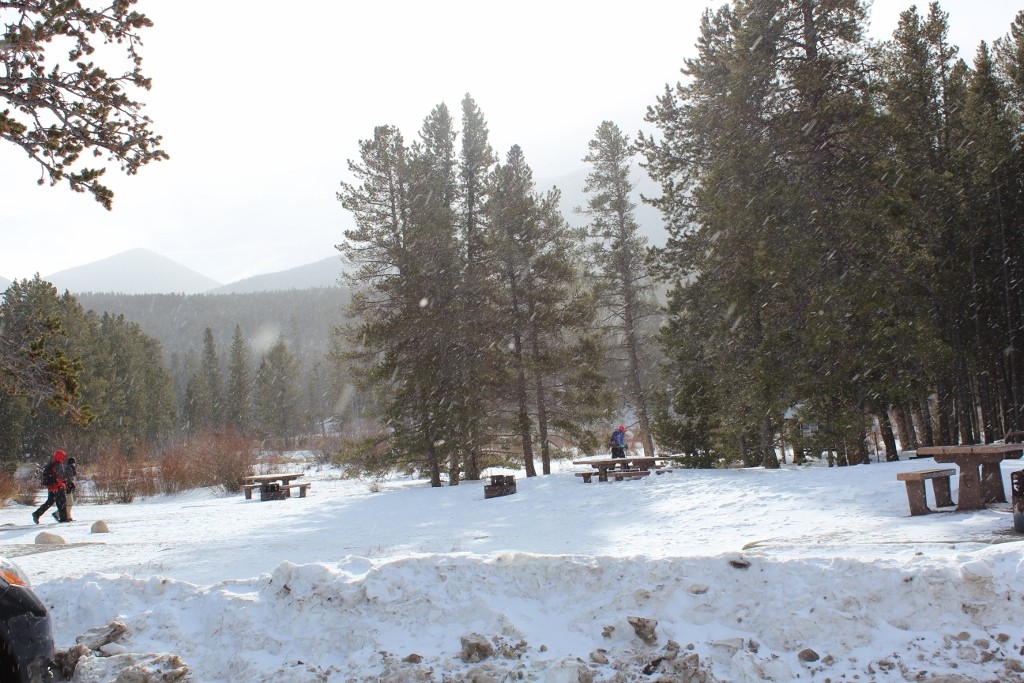 Benches at the end of our hike

This took us about 3 hours to complete. By the time we reached the lake (which was basically frozen over, and didn’t offer any memorable views), I had already developed a significant blister that prevented me from taking the same path back. The extra weight of the snow-shoe tugging on my heel rubbed my skin raw. 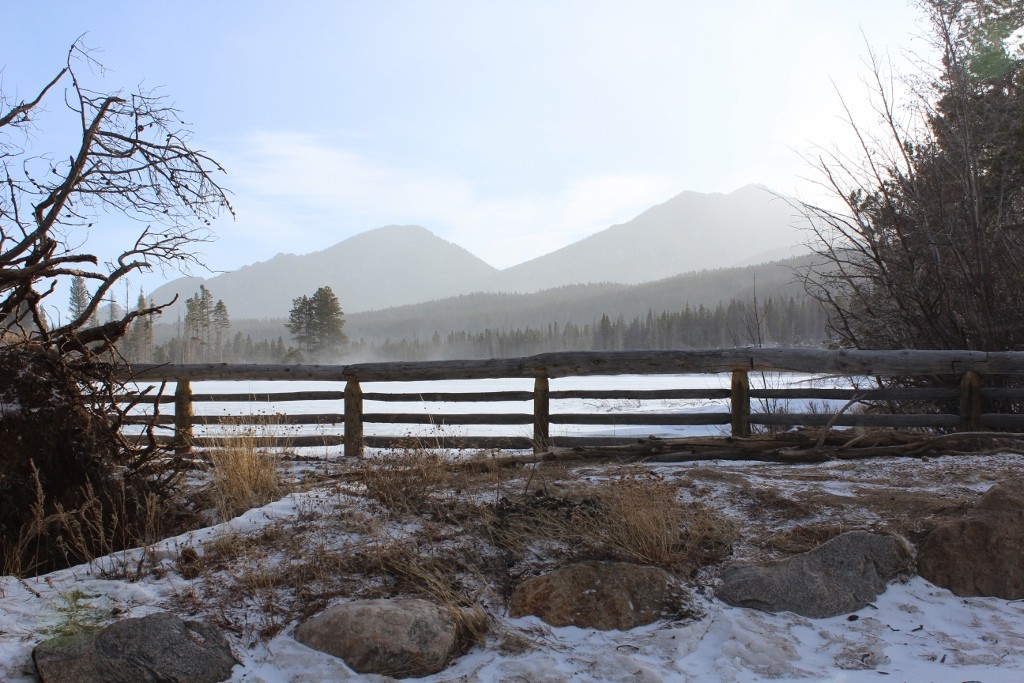 Since we were several miles away from where we parked, we decided to risk a hitch-hike with a good Samaritan, since apparently the national park shuttles were not running this time of year. As we walked to the main road, about a dozen cars passed us by without picking us up, despite our “thumbs up” hitch-hike signs. I had given up on humanity. Clearly we looked threatening in our thug hoodies, ski gear, and neon colors.

Finally, when all hope seemed lost, some Colorado Christians in a luxury-pickup stopped for us. They kindly moved their tiny dog from the backseat and relocated her to the the front, making room for us to sit. They transported us the few miles up the road back to the Glacier Gorge parking lot. It actually would have been quite a hike up hill, carrying our gear back to the lot – longer than we had thought. We were extremely thankful for their kindness. I made a comment to Alex afterwards that they must have though we were gigantic city slickers.

We were glad to see our car. We threw our gear in the boot, and were quickly on our way, finishing our snow-showing in Estes Park epic journey for the day. Here’s what we saw on the way down: 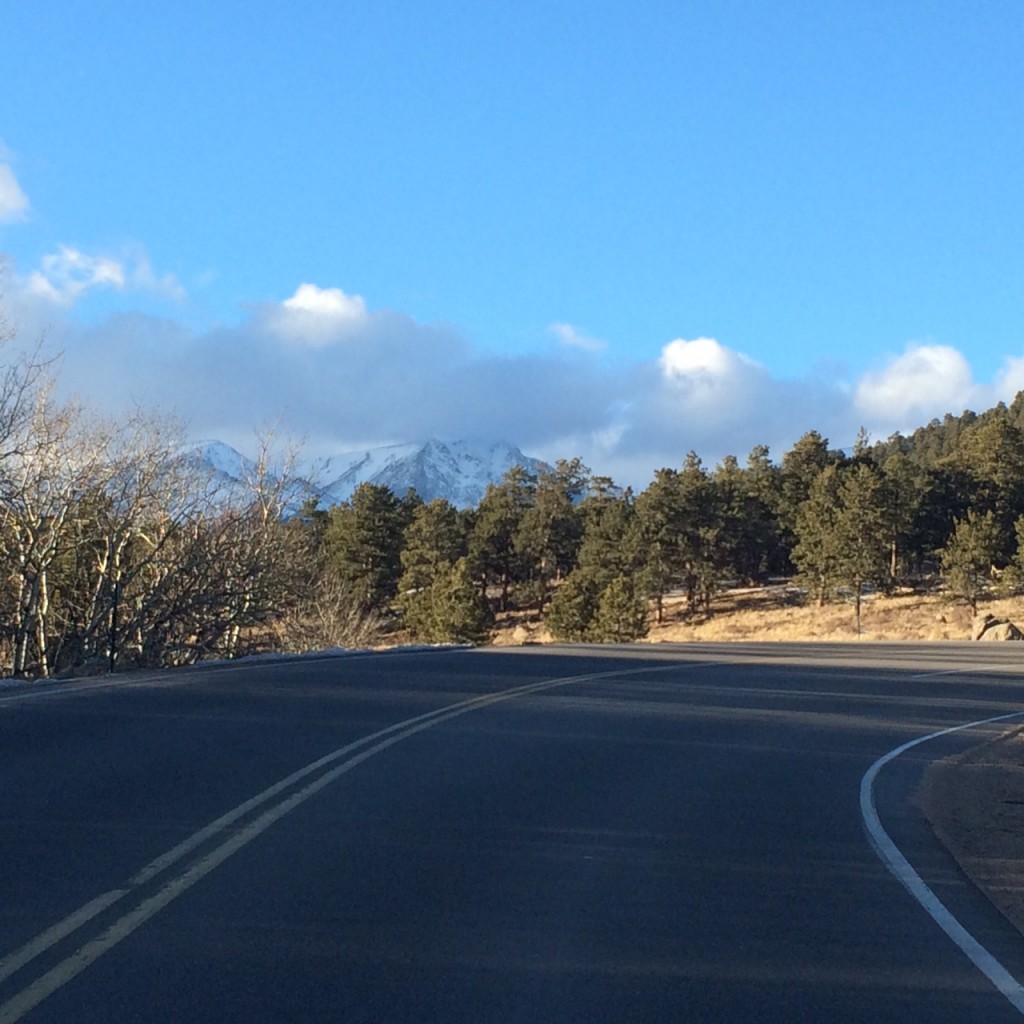 Snow-Shoeing in Estes Park – the View Back

We high-tailed it to our hotel – the Rocky Mountain Park Inn, which apparently used to be a Holiday Inn. 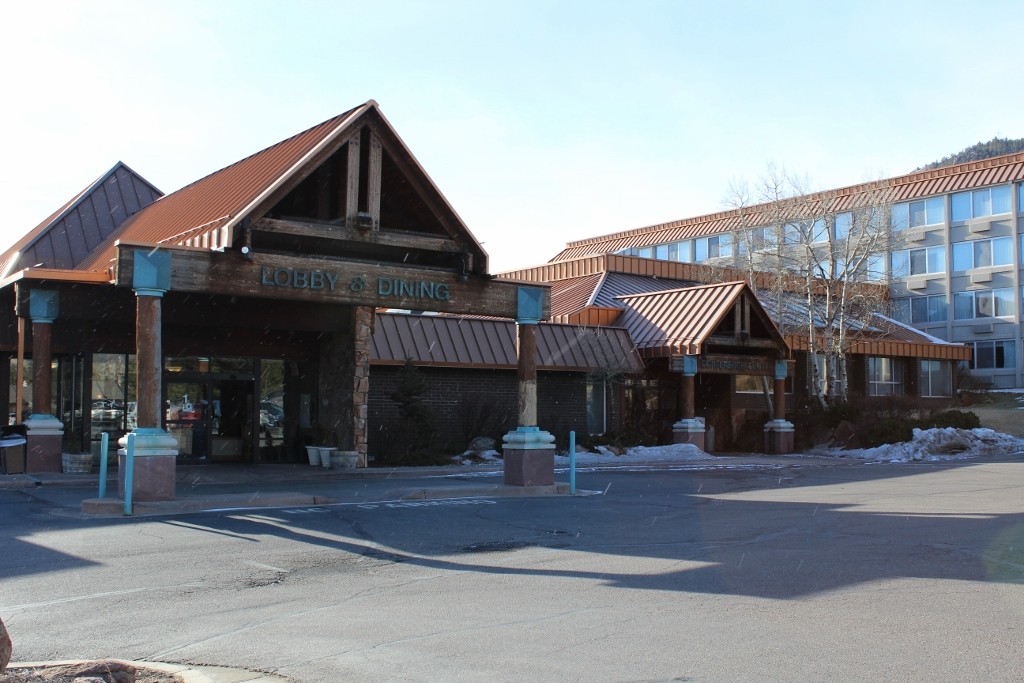 We checked in quickly, and the place see quite cozy and lodge-like. We were both looking forward to showers, so that was the first order of business. The second order of business was finding the football championship games, which would determine who would be playing in the Superbowl. We watched the last minutes of the overtime of the first game – which turned out to be a nail biter. Then, we migrated to a bar/dinner place to watch the second game, eat, drink, and make merry.

We called around an found a few cool places, but not all of them had TVs. At first we were going to go to The Rock Inn since they had live music starting at 5PM…but unfortunately when we called they explained they didn’t have a TV area. So, we changed the plan and instead headed to the Twin Owls Steakhouse, located a few miles North of town in a gorgeous lodge (on the property of the Black Mountain Inn). 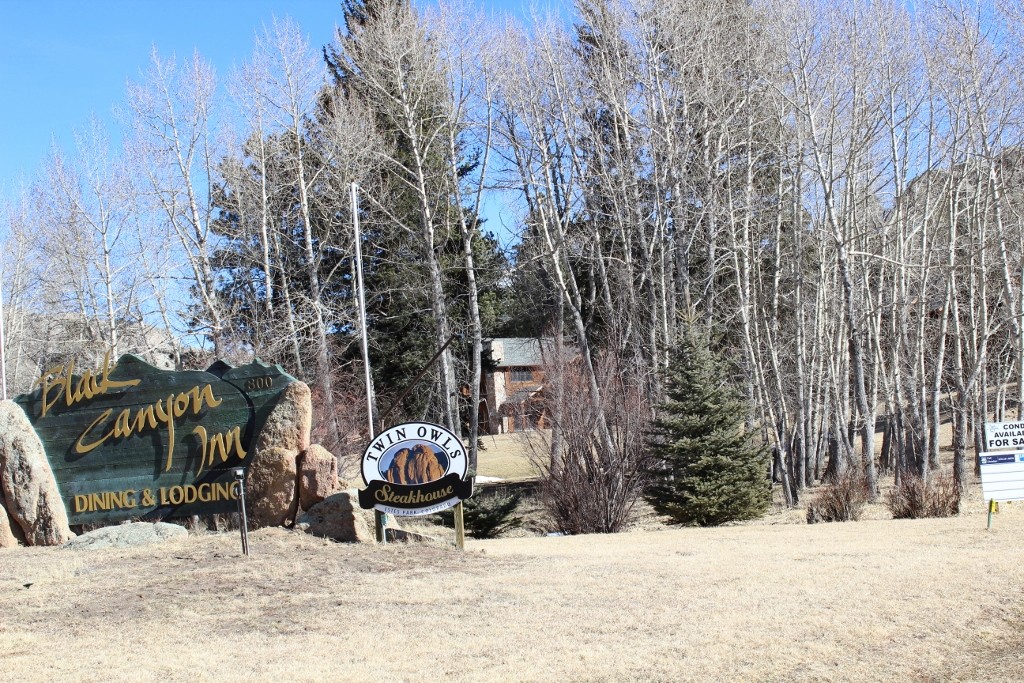 It was a game lodge at its finest with a great menu of hunter’s fare. We ordered an appetizer than included elk kabobs and mushrooms stuffed with crab. I ordered a Bombay Sapphire gin and tonic, and Alex ordered a beer. As the night continued, we ordered a delicious Kunze Merlot from CA, accompanied by a delicious sourdough bread with oil and herb seasoning. 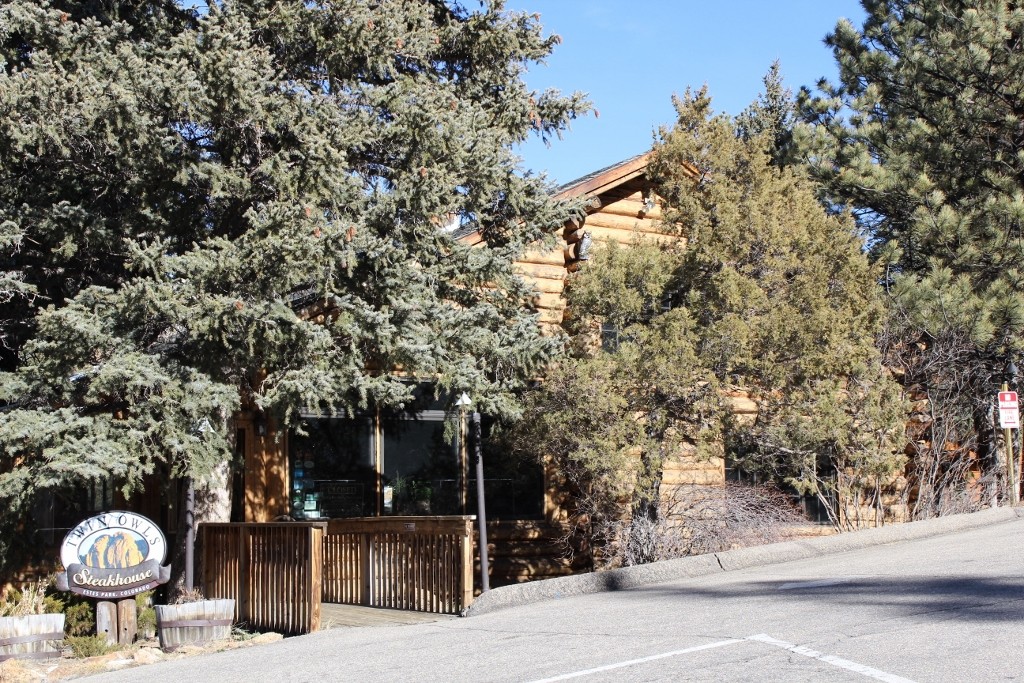 We parked ourselves in the front of the TV at the bar and proceeded to watch the blow-out of the Patriots Colts game. We lost interest after the second quarter. We turned to our food and redoubled our efforts to order an amazing entree. I ordered the short rib and Alex ordered the Colorado lamb chops. Both were very good. I especially liked my green-chile cheddar mashed potatoes. For dessert, we shared a pecan pie a la mode. Delicious!

Around 8PM, once the game ended, we headed back to the hotel to do some blog writing and eventually fell asleep.

In the morning, we woke up around 830AM and went in to the park again for some pictures around 930AM. The park was free in honor or MLK day – but we had the pass any way so it made no difference.

Compared to the previous day, the weather was much worse. In the 30s and a little snowy with high wind. As we got deeper in to the park, the snow increased and the fog began to blanket the mountains. 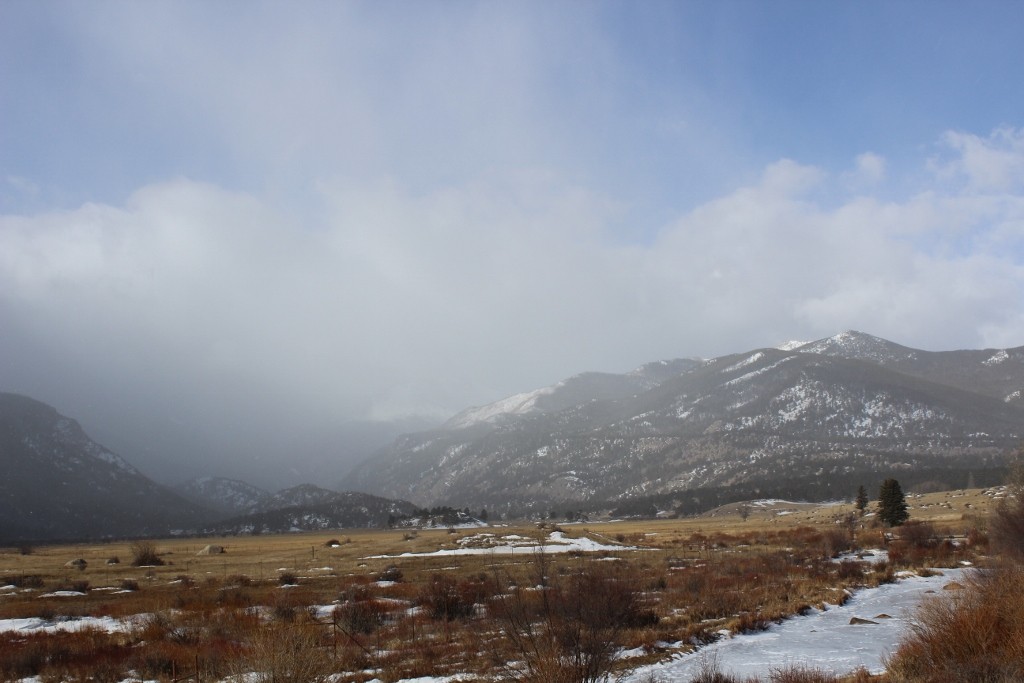 Check out this view: 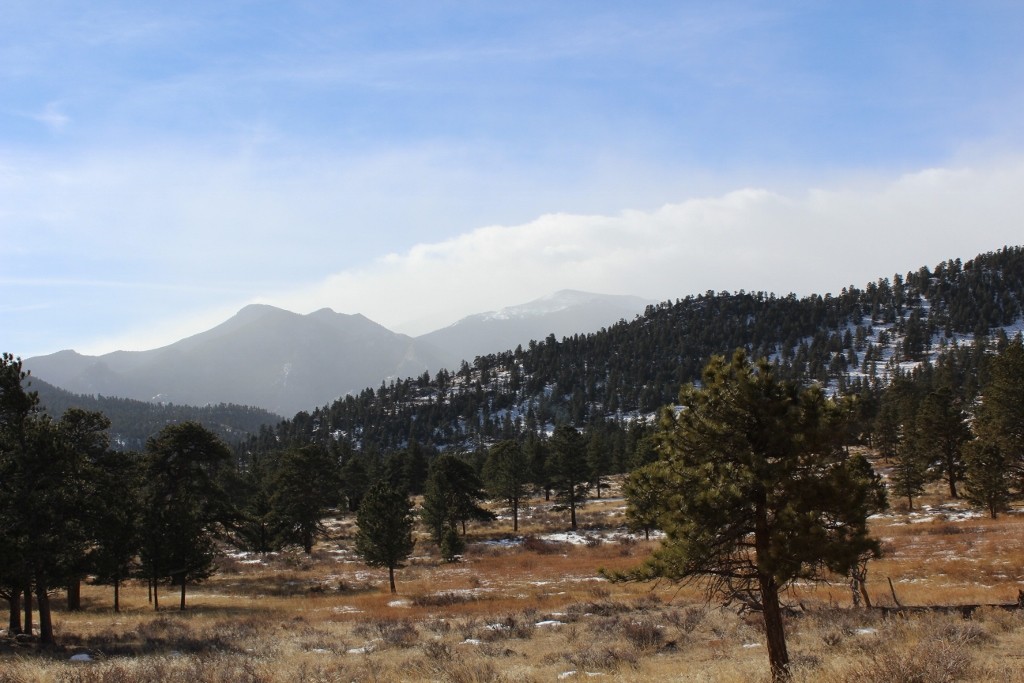 We followed up our drive with breakfast at the Big Horn Inn. A kitch Americana place that reminded me of the places we ate at on the drive up to South Dakota with Elana. I ordered an egg white omelette that was the size of my head. I made a good college-try, ate half, and then surrendered it to Alex. Luckily, his appetite was on par with Elana. So far I have had some good road-trip companions! 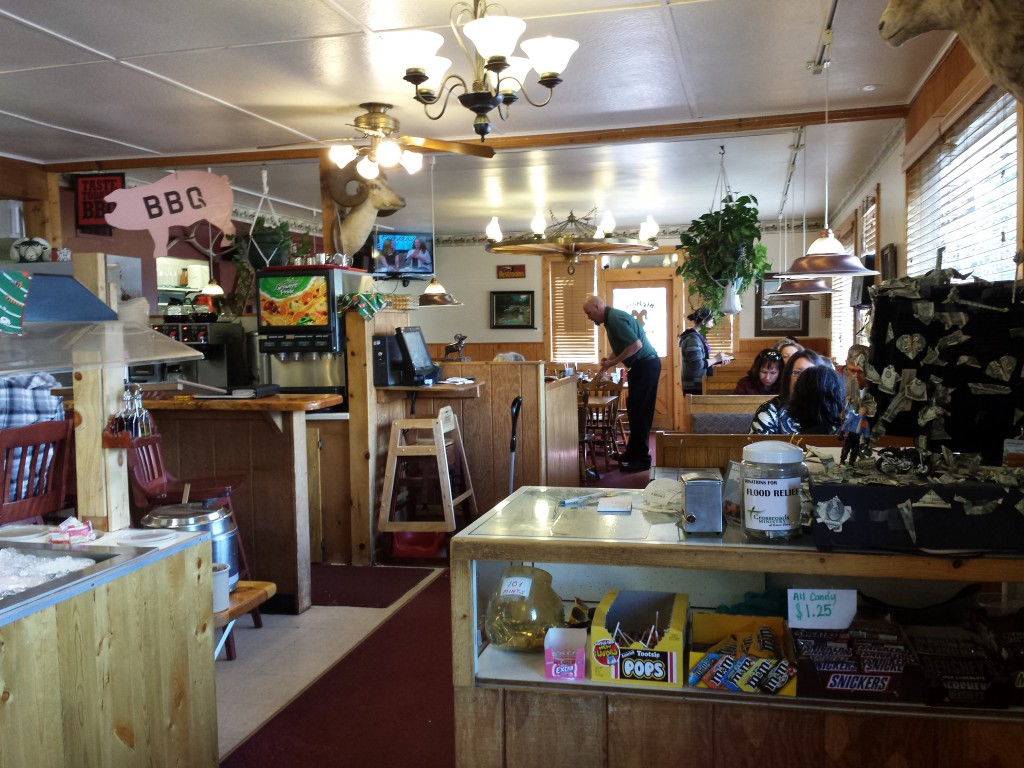 The drive back to Denver was a quick 90 minutes, hardly any traffic, and only minor annoyances of being stuck behind big trucks or motorcycles. It was also a great opportunity to listen to classic rock and mangle the words to quite a few Beatles songs (like “I am the Walrus”). Alex put up with me graciously.

We reached my condo at 2PM thanks to me taking the right I-25 exit this time (Park Street). I said goodbye to Alex, and set out to get through the pile of dirty, smelly, flannel underwear, turtleneck, and socks that I wore on my snow-showing in Estes Park adventure. It was an experience that stuck with me.

5 thoughts on “Snow-Shoeing in Estes Park, CO in Winter”