We woke up at 8AM for a day of Skyline Drive, starting with Brendan meeting Susan at 830 to feed the donkeys, cows, sheep, dogs, cats, and chickens. I prepared coffee and the French toast that was dropped off the previous day while he was out (by prepared, I of course mean “stuck in the oven”, since it was all already done for us). Today’s breakfast turned out even better than the day before – we really enjoyed the homemade organic lamb sausage, the apples, and of course the French toast with fresh butter from the farm. We especially loved the fact that these hearty breakfasts were enough to fuel us for the entire day.

As this was our final day on the property, we again took our time in the morning with breakfast, finishing our puzzle, and savoring the last views of the sunlight dancing on the river. Susan was more than kind, offering a check-out literally whenever we wanted since she didn’t have more guests until the weekend, but we got out by 1130AM so that we could take Skyline Drive back to civilization at our own pace. We took our basket back up to the main house after packing up the Nissan, and we got to see a little more of the farm’s plant and spice operation as we checked out. We really enjoyed this place, and wholeheartedly hope the next owners continue to operate the farm in a similar vein. They have a special thing going, and the cottage is the icing on the cake.

For our drive back, we caught Skyline Drive from the Ruckersville access point and gladly paid the $30/vehicle to spend the next 3 hours winding North at 35 mph through pristine forested wilderness and overlooks into lush Virginia valleys. We stopped a few times to stretch our legs, spending the most time at the Skyline Drive “Big Meadow” rest stop where we took in an exhibit around the creation of the park. It never occurred to us that local people were displaced during large national projects like this, similar to what we had experienced overseas (such as displacing the Nubian people to build the Aswan dam in Egypt). Most people accepted the money offered to them by the US government, but some held out to the bitter end, ultimately being forced off and jailed. I’m sure it was ugly, even if the greater good argument surely won the day.

Unfortunately, we did not do any hiking off of Skyline Drive – mostly because we had to catch a plane that evening and were not dressed properly. But we still got a good sense of what the area offered and left a lot to do for next time. 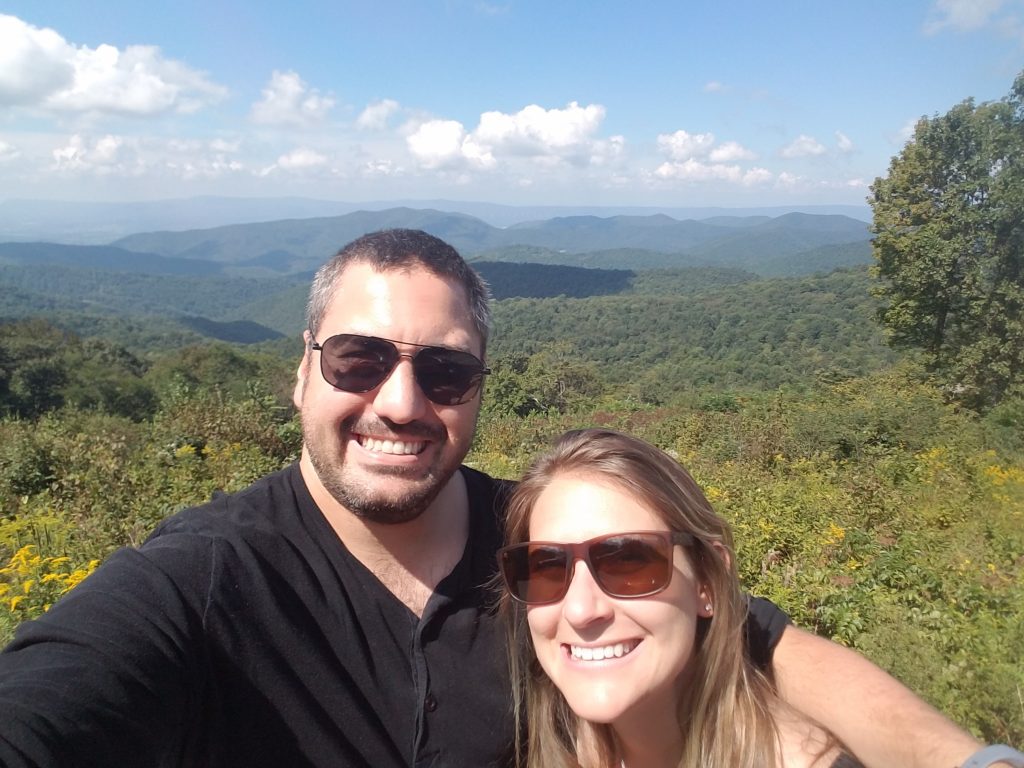 We exited Skyline Drive at Front Royal and make our way to 66 East and back in to Northern Virginia. We briefly stopped in Chantilly so that I could do one last piece of business and turn in my EZ-Pass for the toll road before getting guess and giving back our rental car. We were very thankful ultimately that we chose an SUV for all the Goodwill and trash runs we had to do, and really enjoyed the Nissan Rogue (other than our random fights with the high beams, the gas pedal location, and the integrated phone to audio system). We were at the airport with 3 hours to spare, easily checked out bags, got through security, and found a place to eat near our gate prior to boarding our United flight back to Denver at 730PM. The only mistake we made choosing a window and an aisle seat in the last row of available window and aisle seats – as the middle seat was actually taken in a weird twist of fate by a man who wanted to sit closer to his family in later row. Note to self – when gaming the system to snag an empty middle seat, choose an aisle/window pair second to the last available one in premium economy.

That said, the flight was fine, and we were home on time. Another great trip!