I arrived in Sao Paulo by 0900 on Friday morning (my friends got in about 30 minutes prior) and easily picked up an Uber from the airport with the GRU’s free Wi-Fi to experience Sao Paulo in a day. The Uber ride downtown took back about an hour and cost R60 ($20). It was rush hour unfortunately so the highways were jammed and we were also jammed in to a tiny fiat that miraculously held 5 people and all of our luggage. The weather was sunny and a nice change from Iguaçu Falls.

Nifty concept cafeteria during our Sao Paulo in a day adventure

The plan was to meet the Air BnB host Thais at 1100 at the entrance to her Tower (Tower B) in the Copan Towers downtown and begin our Sao Paulo in a day adventure. The Uber driver dropped us off in front of her building and we immediately found a café to grab a bit and kill some time before meeting her. The café we chose took us about 15 minutes to figure out the system, but once we did re realized it was really quite clever. First, to enter, you had to push a button at some turnstiles and get a token – only then would the turnstile open. Once inside, there were baked goods that you could help yourself too, or you could order prepared items (sandwiches, drinks, etc.) from the counter. Staff members added the items to your token, and at the very end you brought your token up to the cash register and paid for everything attached to your token/account. A few helpful people who spoke bits of English guided us through this process. You can imagine how confused looking and feeling we were in the first few minutes, however. Not to many having to manage to figure out where to store the luggage as this was all happening, since the sitting area was partitioned off and could only be accessed once through the cafeteria.

I ordered a yogurt drink and a caprese sandwich, also a cheese empanada. I shared half the sandwich with Tarek and he also ordered a chocolate coffee drink and a pastry, which he shared with me. I tried a few of the small pastries filled with chocolates that *I believe* were for people to sample in the cafeteria. If they weren’t, mia culpa.

At 1100 Tarek and I walked to Tower B to meet Thais, who came down right on time. We then got Amir and Ramy and made it to the registration desk at the bottom of the tower in front of the elevators. As we gave our passports and photos to the guards, Thais explained the layout of the city and the things we could do. She recommended taking the free Copan Towers tour at 1530 which would allow us access to the roof to get a panoramic view of the city, a great activity to see Sao Paulo in a day. She recommended going to Paulista Avenue for walking and shopping, and to try Japanese food or Italian food and gave us a few suggestions. She also helped me find a place where I could get a mani/pedi, which I did right after bringing our stuff upstairs. Finally, we chatted a little about the lack of regulation of Air BnB so far in Brazil, and how hopefully that won’t change.

After registration, she brought us to the 16th floor and our apartment, 1619. The floor layout in the building was very smart – one elevator stop covered two floors, for example floors 15 and 16 were both served by our stop. For 15, you took the ramp down, and for 16 you took the ramp up. Tarek and I marveled at the efficiency and why this has not caught on elsewhere in the world.

The apartment was a small efficiency with two beds and futon, sleeping four total. From the description I thought there were 4 separate beds, but it wasn’t a huge deal having two people share the double bed. I’m sure I just misread the description in my haste to book from Rio. It cost $130/night and we were staying for one night only.

After I returned from my mani/pedi (I chose indigo and it cost $15), we all went walking. We went to Republic Square (which Thais told us not to visit after dark) and took the underground metro one stop to Paulista, where we then walked for about 0.5 miles. Here is us in the super efficient, clean, and modern underground metro. 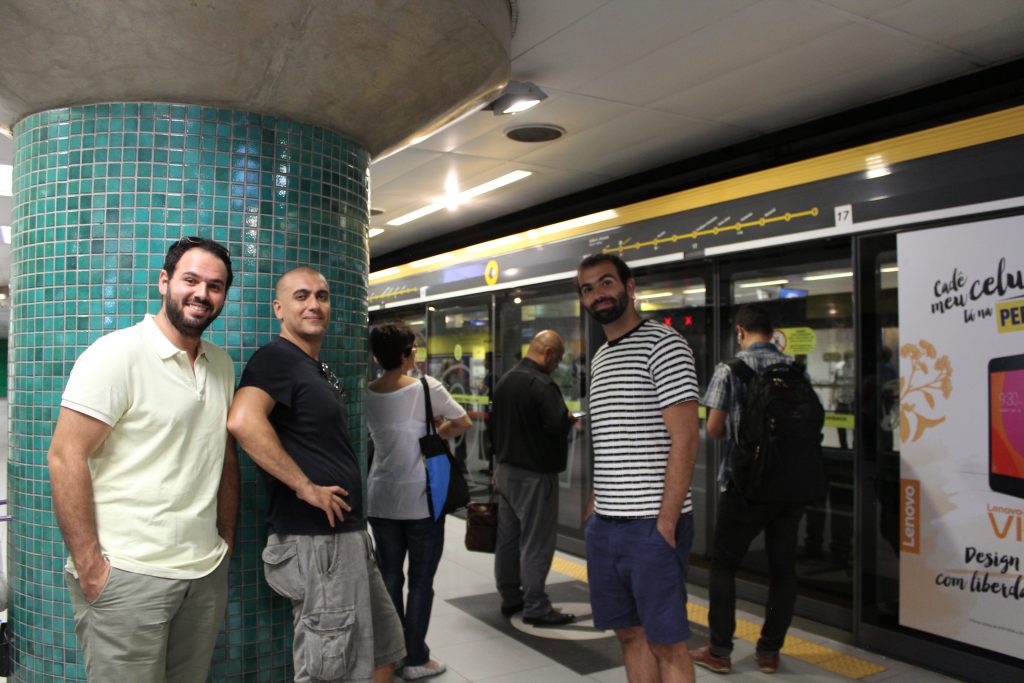 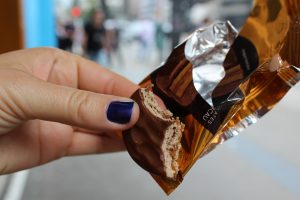 Paulista Avenue is the main shopping street with restaurants, boutiques, and malls, and another great idea for Sao Paulo in a day. The highlight was the chocolate shop 🙂 (also notice nice purple nails).

Ramy and Amir continued on while Tarek and I turned back to take the metro and return to Copan to take the tour at 1530. We found this street food market nearby Republic Square and stopped long the way.

We arrived a little early and the guard told us to return at 1515, so we killed a few minutes in the apartment and then tried again. When we returned we went up some stairs in to an office and checked in by writing our names in the ledge. At 1530 or so, with about 20 other people, we were escorted to the Tower B elevators all the way to the top, and then led up 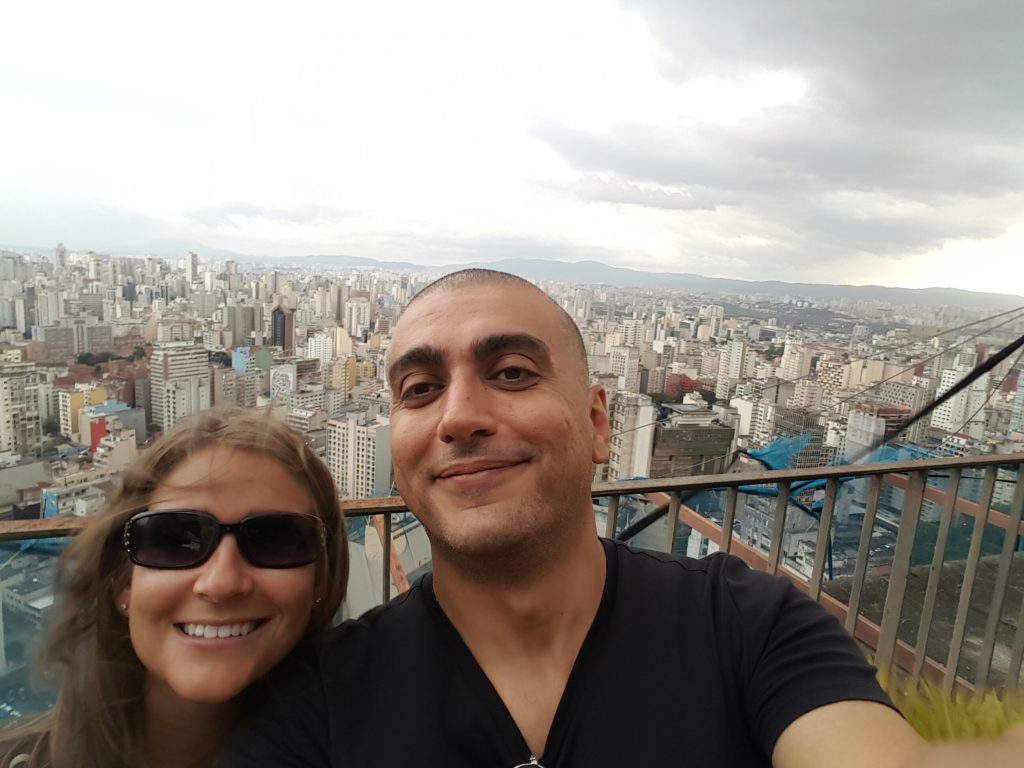 some more stairs so that we could pop out on the roof. The weather was starting to turn rainy so we only stayed 15 minutes or so after taking copious pictures, but found we were locked in (the gate we took to enter the roof had been sealed off). We had to wait an additional 10 minutes for the guide to come and let us down. It was a nice city view and certainly did portray the magnitude/density/breadth of São Paulo, which I liken to Los Angeles. Just a big sprawl. 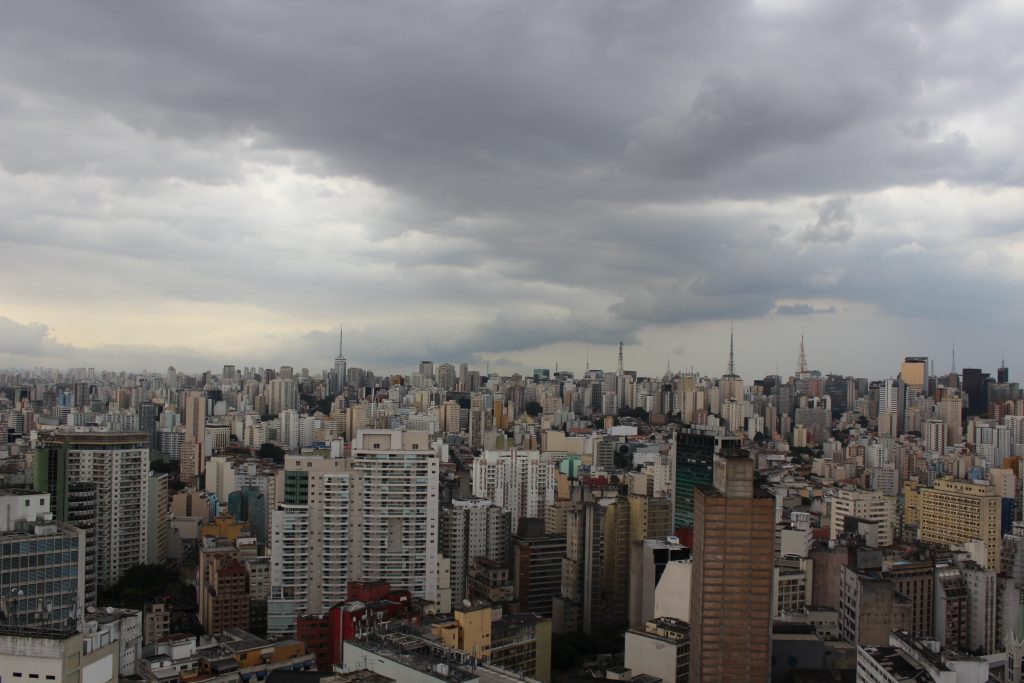 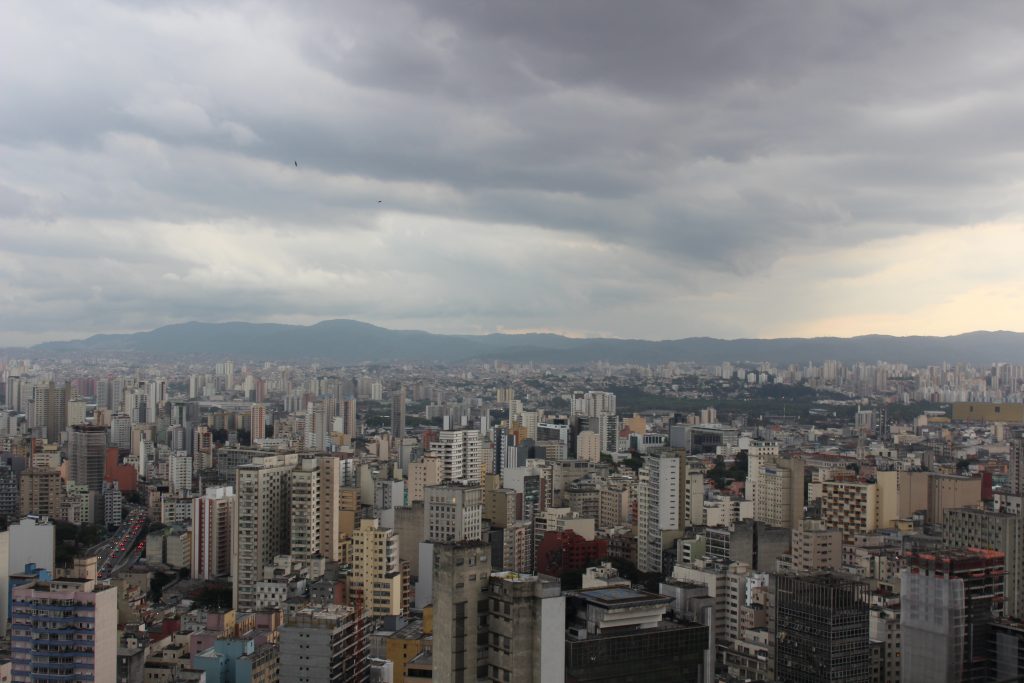 Back in the apartment Tarek and I both showered, and when the other guys returned we talked about the plan for the evening. We decided on Italian food on a little street that seemed to have been completely owned by an Italian family, and renovated/rejuvenated to be a charming, pleasant, touristic little area. It was called Rua Avanhandava. Then, we would go catch some live jazz at an intimate jazz club nearby called Jazz B. We had scoped it out earlier and it looked good, and if we arrived before 2000 the cover was only R25 per person (normally R35).

SaoPaulo in a day – Rua Avanhandava

We walked to the Italian street owned by the Mancini family and found several restaurants to choose from, all with various price segmentations and cuisine focuses. Definitely something to check out if you only can see Sao Paulo in a day. We chose the least expensive most quintessentially Italian one on the corner. It was totally empty when we arrived since it was only 1800 and Brazilians eat quite late. It started to fill up though as time progressed. We sat by the window near the musician’s area (live music started at 2100 at nearly all of these restaurants) and had several very attentive waiters looking after us. Tarek and I share a vegetarian mushroom tomato olive mezzaluna pasta and an eggplant tomato mozzarella pizza. They were both delicious, and we boxed up the remaining slices of pizza to give to one of São Paulo’s copious homeless population. Ramy and Amir ordered a prosciutto pizza that they said was also very good. I was not going to have dessert until the jazz club, but by mistake three chocolate mousse cakes showed up so there I was eating dessert. I couldn’t complain. The whole meal ran us about R130 per person ($40).

It was still raining and was starting to get quite muddy, slippery, wet, and uncomfortable. Tarek and I got in to a large discussion about the bitchy woman sitting next to me on the flight from DEN-IAH and discussed our different approaches in handling the situation. My approach was more outcome based and his approach was more principle based (he would have asserted his rights, whereas I let it go). This led us to get lost finding the jazz club, so when we finally did arrive we were pretty wet and cold (again). On the way Tarek gave the leftover pizza away to a group of teenagers that appeared to be homeless, but in retrospect, after smelling the marijuana, were probably just stoned.

At the door of Jazz B, the hostess tried to charge us the higher admission price but I protested since we had arrived prior to 2000. Eventually, an English speaking waiter came over and we explained the situation, and he said that we were right. We paid the proper admission and found a nice table in the front. To kill the time I drank a very strong caipirinha (with cachaco) and we played an Egyptian card game called Basra. It took me a while to get the hang of the game because it was a little complicated, but once I got it, it turned out to be a very nice game and great for four players.

The jazz began around 2130 and we stayed for about an hour. It was distonal, experimental, artsy jazz that honestly was not my favorite. The first some consisted of the trio of musicians making the weirdest possible sounds from their instruments (piano, bass, drums) and was more rhythmic than anything else. Eventually a soprano saxophone plyer joined in. I was too tired/bored to wait for the according player to step in (which we were all kind of looking forward to), and left around 2230. It was a nice experience even though it was not my favorite type of jazz. The group consisted of musician’s musicians who were all about using the medium as an art form for expression and could care less about the audience. However, the jazz club was fantastic, and I recommend this to anyone looking for some nightlight during a Sao Paulo in a day stay.

Sao Paulo in a day – Jazz B

Back at our apartment, we sorted out the sleeping arrangements and were pretty soon in bed. The next morning Tarek and I woke up at 0730 to grab coffee at the Italian coffee shop in the Copan Towers before our Uber arrived at 0815. It was very, very nice coffee and pastries. We said goodbye to Amir and Ramy (they had been wonderful traveling companions) and looked our last at the city. The Uber right back to GRU this time only took 40 minutes without traffic and cost about R50. We checked in without any problem and had lots of time before our flight. Everything was on time for this GOL flight to Manaus, and we even arranged to sit together in the exit row with plenty of space and an empty aisle seat. We bought some food onboard (chicken Caesar sandwich and mixed nuts) as it was a budget no-frill airline like Spirit or Frontier where even the soda cost money. They did give us free cookies though. I did a lot of reading to pass the time, and 3 hours later we were in Manaus, ready for our Amazon adventure.

2 thoughts on “Sao Paulo in a Day – #layovertips”