Yesterday, we had grand plans to potentially head out of Trinidad and Playa Ancon early and go to the Bay of Pigs the next morning, spending the night somewhere else along the way back to Havana. But, after breakfast at 10AM, we both decided that a “chill out” beach day would be better, and decided to go to the Playa Ancon.

But first, we decided to make dinner reservations with Jose Peralta for 8PM – he had some fresh fish caught in the morning that he would prepare, but also offered us goat or pig (we chose the fish).

We borrowed some towels from the Hostal and set out to find a beach. Rather than going to one of the beaches that were empty, we decided to do one that had a few food/drink stands for the obvious reasons, but looking back that was a mistake. They charged for parking and tried to hustle us in every way. First of all, as we drove by, old guys manning the parking would try to get our attention and signal for us to “Park here” – as if we had no idea where we were going and what we wanted to do, and so we might as well just blindly follow his instructions and park there. Dave and I both agreed that this strategy is more of a turn off than a turn on for us, and we are more likely to go out of way NOT to park there; but obviously it works on some people or else he wouldn’t still be operating this way. 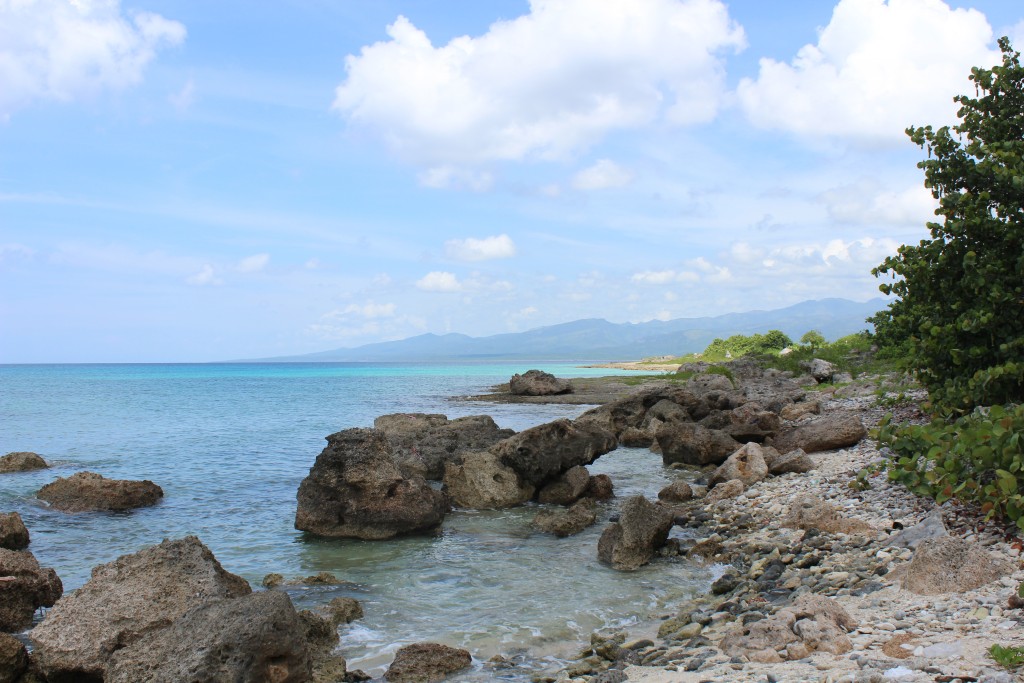 We drove past that place and parked at another, slightly less annoying place. However, a similar attendant came up and told us parking would be 2 CUC. We argued with him for a while and made to leave. Another tourist came up to us and told us it’s better here and to pay the parking fee, because it’s not safe and they keep an eye on the car. Total B.S. – the area was safe, and we left our car unattended plenty the last few days. But, we liked the beach enough and even though we were starting to get bad vibes, we decided to negotiate and just pay him 1CUC, and then head to the beach.

We found two beach chairs, and hit the water. Once we got in the water, a guy cam chasing after us trying to tell us something. At first we thought he was saying that we could rent a snorkel and mask for 2 CUC if we wanted to see the coral. We waved him off but he persisted. Finally we got the clue that he was telling us that it was 2 CUC each to rent the chairs. At that point, we were so fed up with being nickled and dimed for everything on this beach (and thinking we might also have to pay for the sun and the sand on this public beach) that we got dressed again and decided to find another, less hustle-oriented situation with better juju.

We reflected on the scenario and wondered how this came to be. First of all, with the parking. It’s a public beach, just like the other beaches we saw on the way in. The parking at the other beaches were free. Should this beach not be free parking too? The only different between this beach and the others was this beach had a little drink/food kiosk. We decided that some guy must have just started charging for parking, and probably had an agreement with the police to allow him to keep going, even though technically parking was free. The chairs we actually understood – that was a service someone was providing and we could choose to use them or choose not to. Similarly, if someone provided the service of renting towels, we would understand that as well.

The other thing that Dave brought up was that the parking and the hustling might have actually worked against the owner of the food/drink stand. Perhaps more people would stop at that particular beach if parking was free, and then logically spend additional money on food/drink.

Even though we were annoyed at the situation, we were interested in learning more about how it developed. And we discussed this in depth on the second beach, where parking was only 1 CUC and there was no hustle for anything else. This beach was called La Cuchila de Maria Aguilar, and we enjoyed the setup immensely. 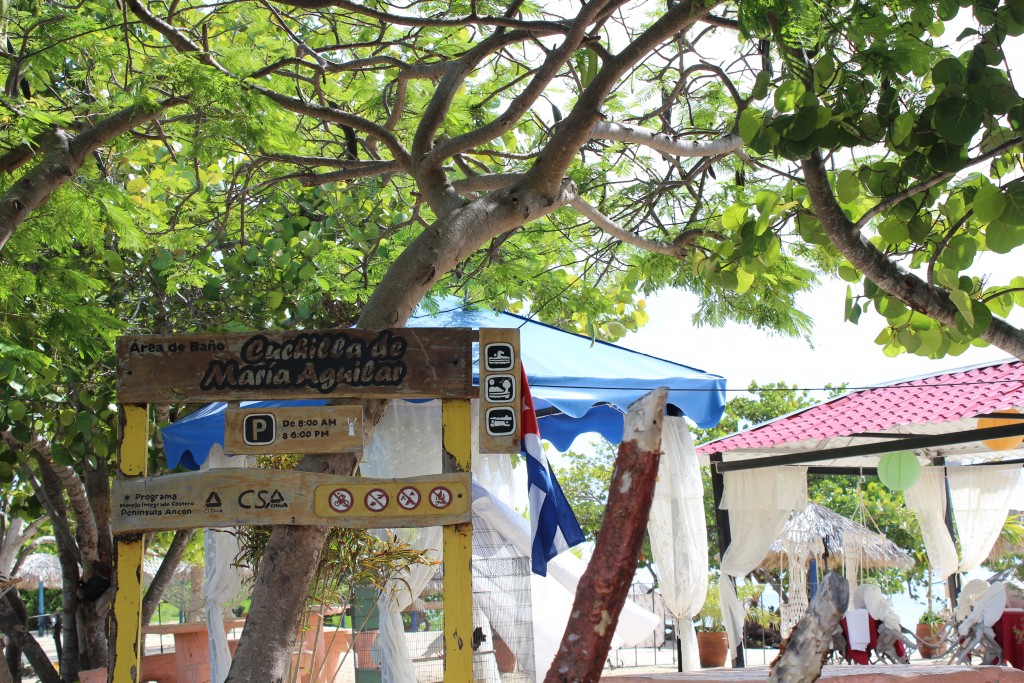 After going for a long swim, we settled in for tanning, reading, and napping. 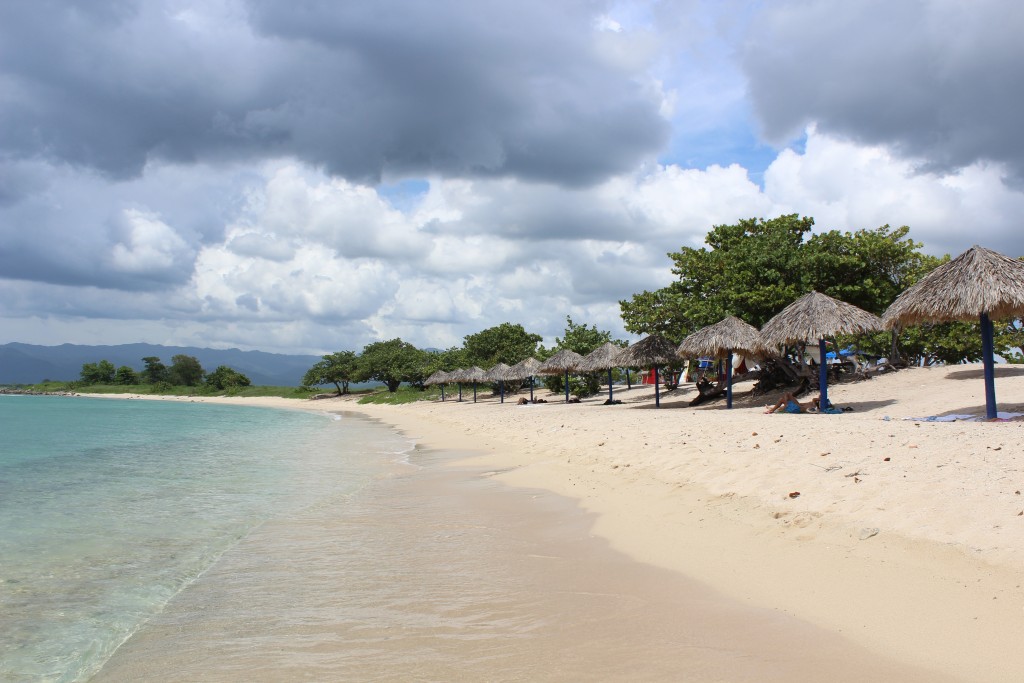 Later on we took a long walk to another beach area and inquired about renting a kayak, but unfortunately they were closed that day (Tuesday afternoon). 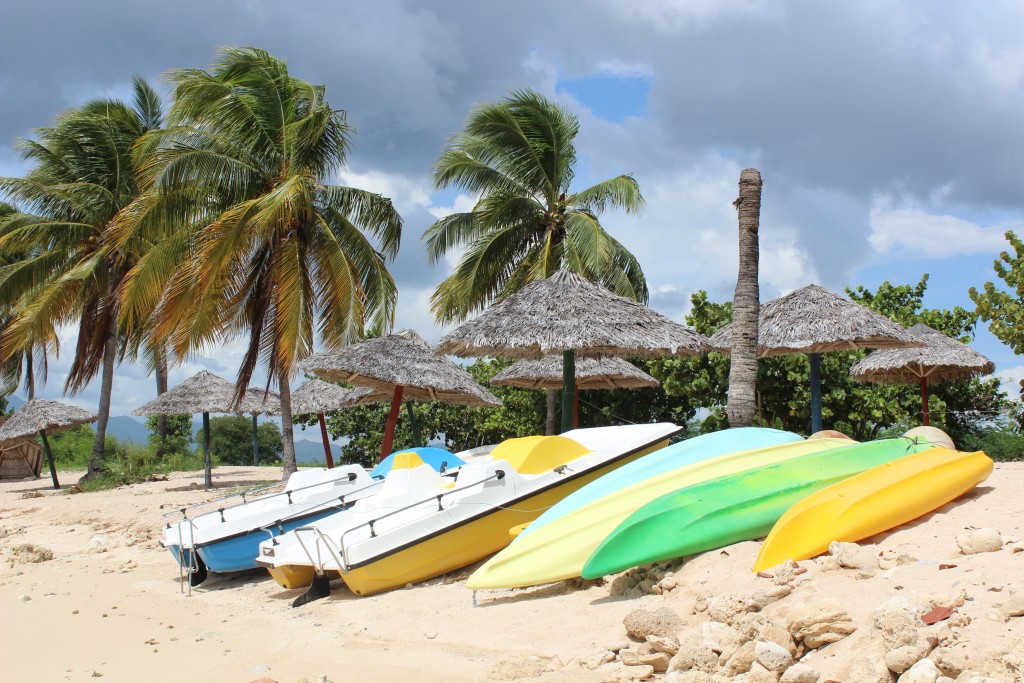 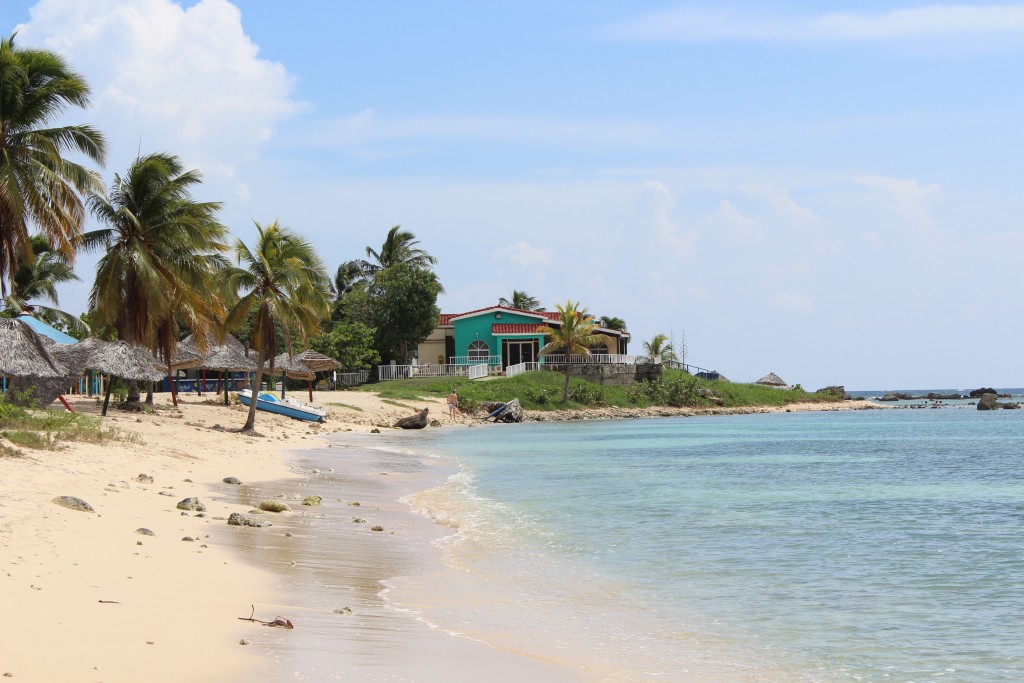 Back at our beach, we picked up soon 3 CUC Pina Coladas that were fresh and refreshing (but didn’t seem to have any rum in them).

We even saw this little guy waddle by us: 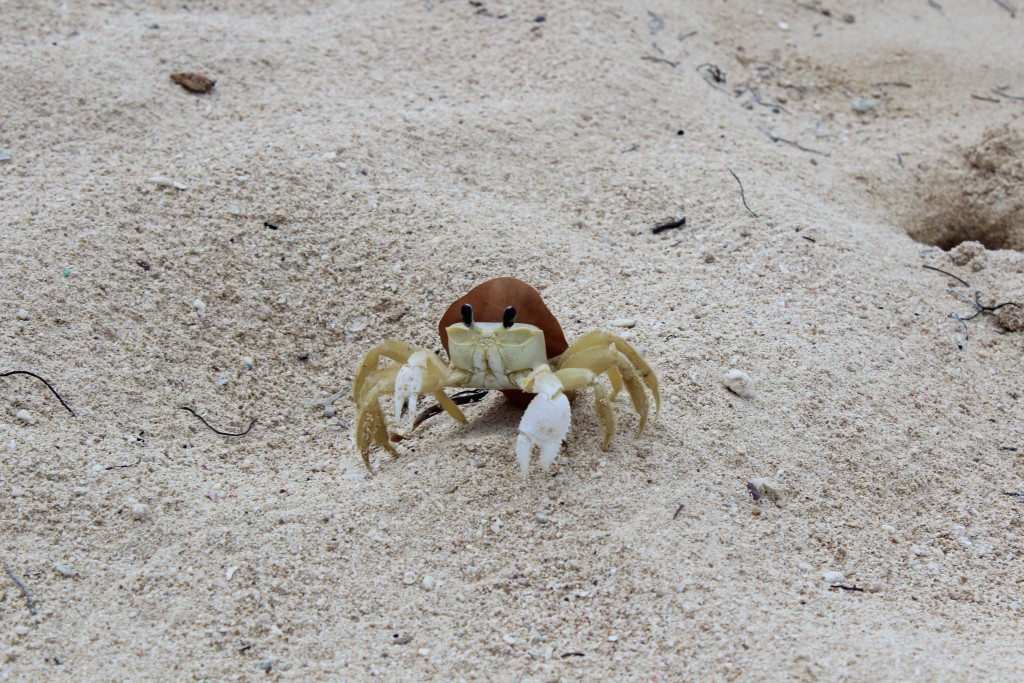 Around 4 PM we decided to pack it in and head back to Marlin Marina to try some fly fishing (pescanda a la mosque). The conditions were not right – the water was very still and it seemed to be between tides, but we tried nonetheless (with Fredo’s permission). After an hour of trying and catching nothing, we moved to another spot just outside the marina, on a little bridge that separated the ocean from the channel, and created a bit more of a current through the narrow opening.

This was slightly better, but still we caught nothing. I tried my hand at casting a bit, so the practice was good, but kept getting tangled up on the bushes around us.

We decided to give up and head back to the Hostal for another well-deserved shower and to start getting ready for dinner, which we were really looking forward to.

Around 745PM we headed over to Jose’s restaurant, El Galeòn, again, which was just a few blocks from our Hostal. Unfortunately, Jose wasn’t there – his daughter was tending to the guests that night. She was very friendly, but was no Jose – and he was half the reason we wanted to come back. Also unfortunately, they were out of mint, so mojitos were off the menu (we have been looking forward to those all day). We decided to have, on her recommendation, a local Trinidad drink called canchanchara – it was rum, muddle lime, seltzer, and honey. This drink was apparently created in Trinidad to withstand the difficulties of the 10 Years’ War. Both of us thought it was just OK – a little too sweet for our liking. She put all the honey on the bottom of the drink so we could choose or not choose to mix it in, but towards the end of the drink it became all honey, which neither of us could finish.

However, dinner was still delicious. We started off with fresh cabbage/lettuce/tomato/cucumber salad same as the night before, and the came a vegetable fish stew, using some of the fish caught that morning. It was excellent. The main course consisted of a huge portion of fish filet, grilled plantains, and rice. Dave thought the fish was tough, but I liked it because it tasted not fishy and more like tuna. We both agreed that the preparation was very good. 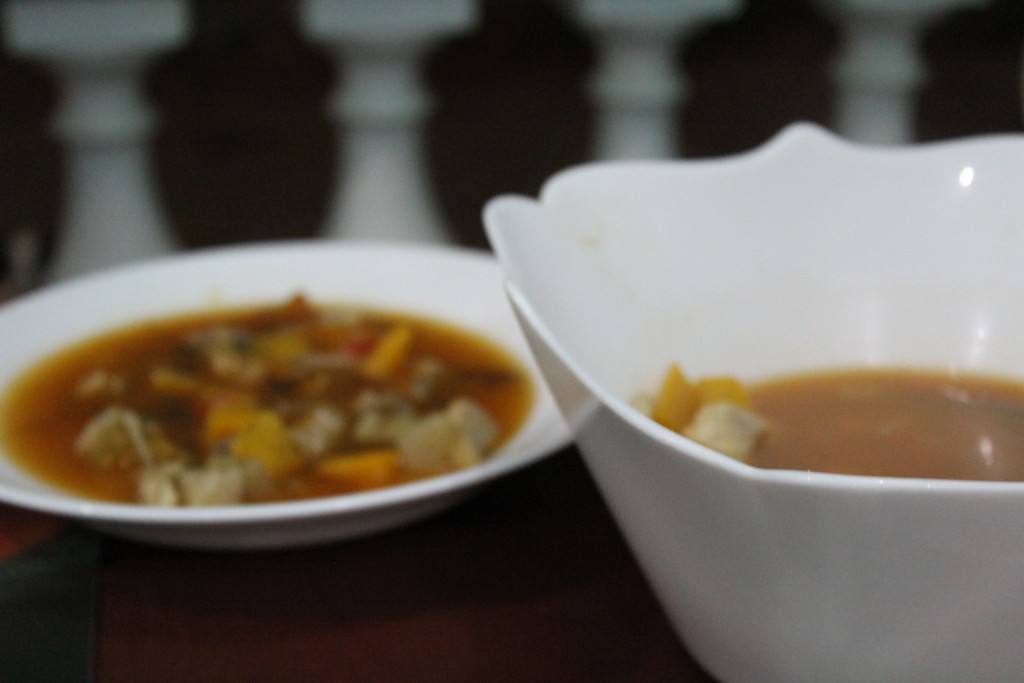 Since Jose never did show up, and since it appeared the daughter was closing up shop, we decided to try two shots of Havana Club rum (the 7 year’s aged dark rum) and get going. We thought the rum was OK, but nothing magical. We took a small walk after paying the 31 CUC for our drinks and dinner, and got back to the room around 10PM. We took it easy the rest of the night – talked, blogged, packed a little. We’d be leaving the next morning so it was nice to have a little time not rushing around.