Our final full day in Marrakesh we spent catching up on sleep and relaxing at the hotel until the late afternoon hit and we were ready to take on Marrakesh by night.

Having slept great for the first time in 2 days, and after a full morning of rest, we decided to hit Marrakesh by night and made for the main square, Jmaa al Fnaa, at 4PM. We walked and it was pleasant and easy, especially now that the rain had stopped. The merchants, restaurateurs, and street performers had just started the evening festivities. Our plan was to walk around and do some shopping first, then go back to the square and people watch. We had arranged our final Marrakesh dinner at 830PM at an upscale Riad near our hotel called The Red House. Since we basically were lame the two previous nights, staying in our room, it was mandatory for to experience Marrakesh by night at least once.

The square was a lot better than the previous day and people weren’t nearly as aggressive (possibly because there were just a lot more people and tourists to choose from). I didn’t get henna attacked and we hardly got hassled. It could also have been our outlook, considering we were in a far less agitated mood today since we got some sleep. I was definitely on the mend; Brendan was still in the throes of a head cold.

We again moved off the square and in to some alleyways, this time purposefully trying to get lost. 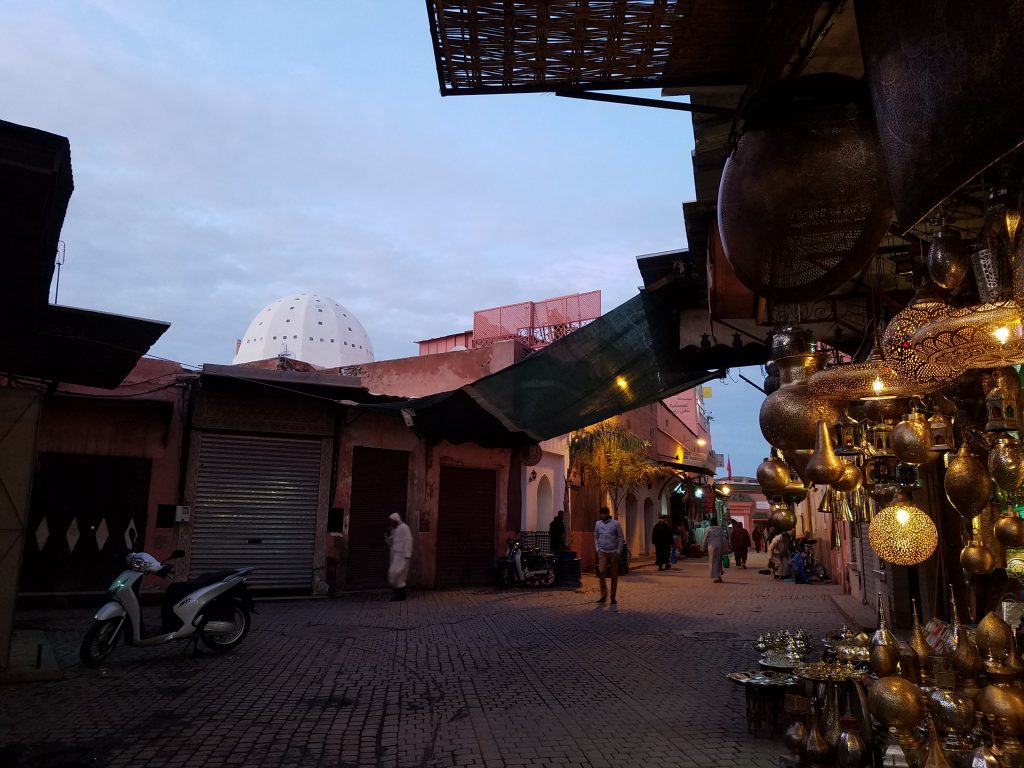 The merchants were a medium level of aggressive (more than Fez, but less than the previous day in Marrakesh) but we still enjoyed the serpentine web of stalls, stands, and squares. 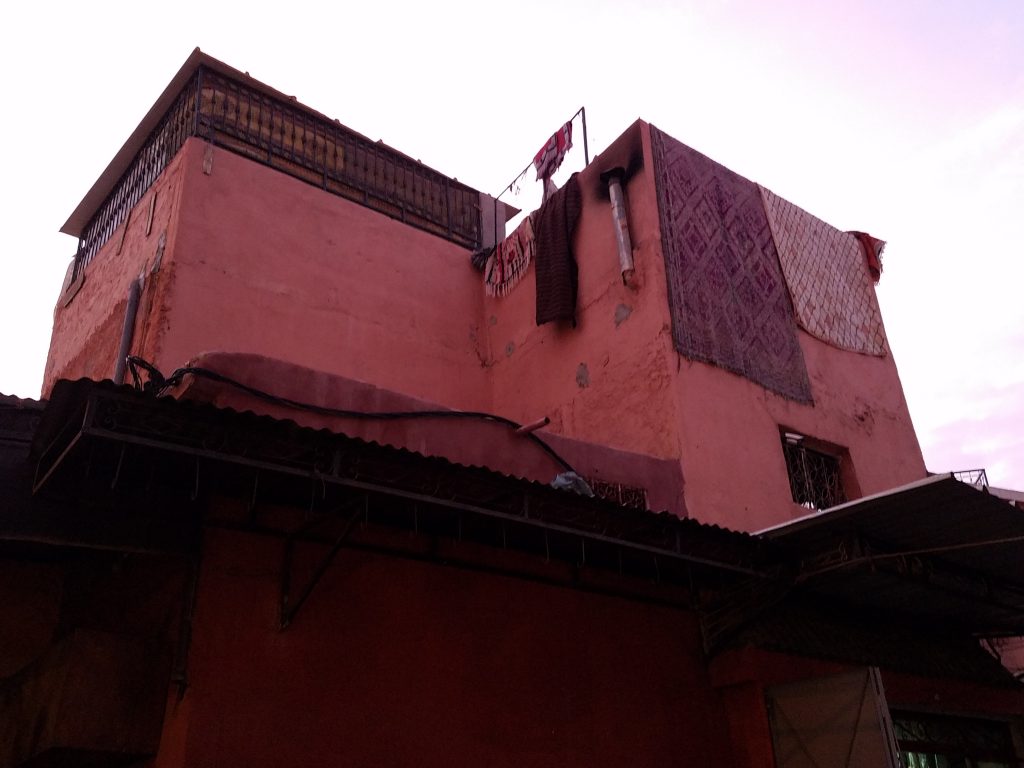 View of Marrakesh by night

We stumbled on to some interesting finds, one being this gorgeous street towards the edge of one of the medina sides.

At some point we were feeling hungry and tired, so we found a random hidden courtyward and a small restaurant with pleasant outdoor seating and we ordered coffee, mint tea, and the best bread with sauce we had seen yet in Morroco. The sauce was something like a salsa with, surprise, cilantro! We had been smelling it early in the marketplace but hadn’t yet tasted it in the food. It was delicious with warm bread. The restaurant manager was a young man who made a perfect cup of tea. We even enjoyed the company of a very well-fed happy kitty cat.

The small cafe we found was somewhere around this interesting street art. 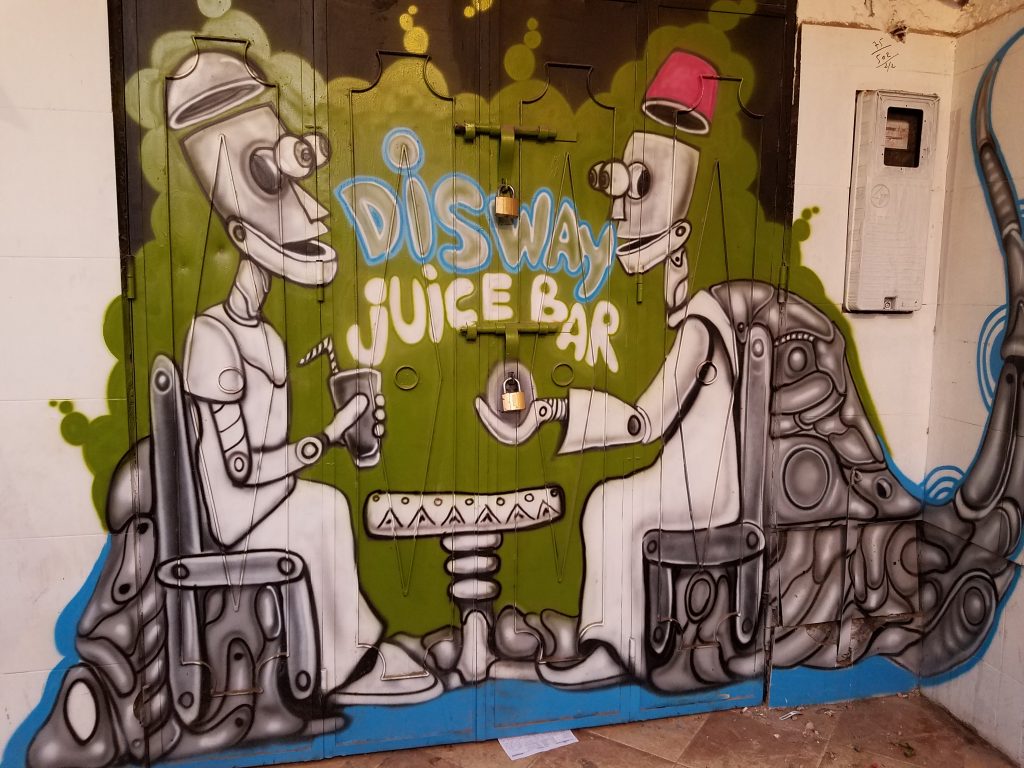 After this much needed repose, we continued exploring Marrakesh by night. We moved back in to the central area after exhausting the edge of the market on one side and starting to get more in to locals territory where there were just houses and mosques. We found an alleyway that offered art and we tried our hand at a few shops. We struck out at the first – I found a painting of a Toureg man that I really liked, but the proprietor wanted too much and wasn’t willing to engage. She was actually an artist herself and I enjoyed her shop and seeing her paint, but ultimately did not purchase anything (her style of art was not to my liking).

The next shop we tried we struck gold. We found two very large oil pieces we instantly liked – one of a market scene by an artist called Hassan Burkiya حسن بورقية, maybe 2 feet by 5 feet, and an Arabic calligraphic design (that I had been looking for since Bahrain) that was about 2 feet by 3 feet. The individual prices were ridiculous – 1700 dirhams for the cityscape and 2300 dirhams for the calligraphy. The manager explained that the calligraphy was a very sought after and hard to achieve style, and there were very few Arab artists who practiced this art-form. Khalid (who signed with symbol rather than a signature) was the artist who painted the piece we liked (his real name is Halawi حلاوي). 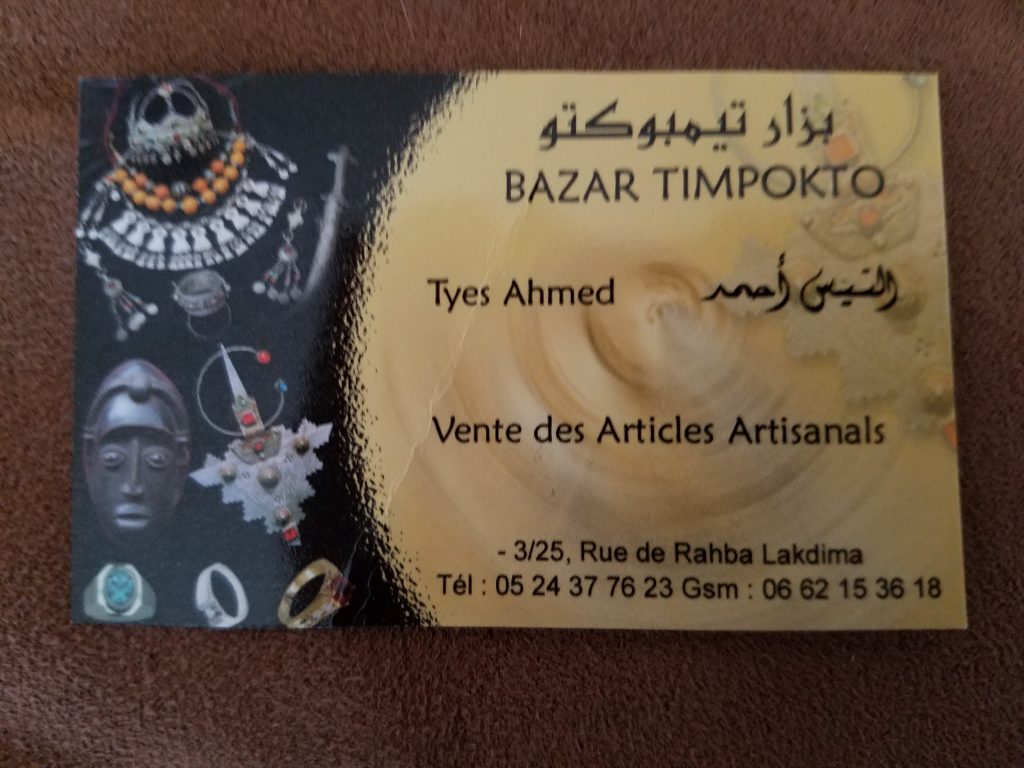 After an opening offer of 1500 dirham for both, and the manager laughing at us and asking us for a real offer, I countered again with 1500, saying that that was all we had and take it or leave it. He eventually accepted and I knew I should have gone lower – he accepted too easily, only about 15 minutes of discussion. We didn’t even have to walk out of the store and pretend to leave. But, we ended up with two very nice pieces for $150 USD. Here’s the shopkeeper’s card to the right.

We headed back to the main square to make our final purchases – souvenir magnets in bulk. We tried 3 places and only were able to successfully negotiated from 1 for 10 dirhams to 15 for 120 dirhams at the final place. For some reason these merchants did not want to budge on the price of these crappy magnets, probably because they had been sold and resold so many times in the supply chain before reaching them that there was little room for margin.

One last stop at the main square to see the street performers and chaos of Marrakeseh by night, and we caught a taxi for 20 dirhams (negotiating through 3 or 4 taxis that wanted to charge us 30) back to the hotel. We dropped our bags, rested for a moment, and then did the same thing again to get a taxi from the hotel to dinner. It was just around the corner, but we were tired of walking at this point.

We arrived to The Red House Restaurant and Riad promptly at 830PM and were immediately wowed by the peaceful garden outside and the tranquil and beautiful dining room (after we made too much noise opening the door). An Arabic guitarist was playing and singer softly in the front of the room, and there was a muffled stir of voices softly talking and enjoying wine and dinner. This was a wonderful place, and so contrasting to the chaos of the square earlier. It was a totally different side of Marrakesh by night. 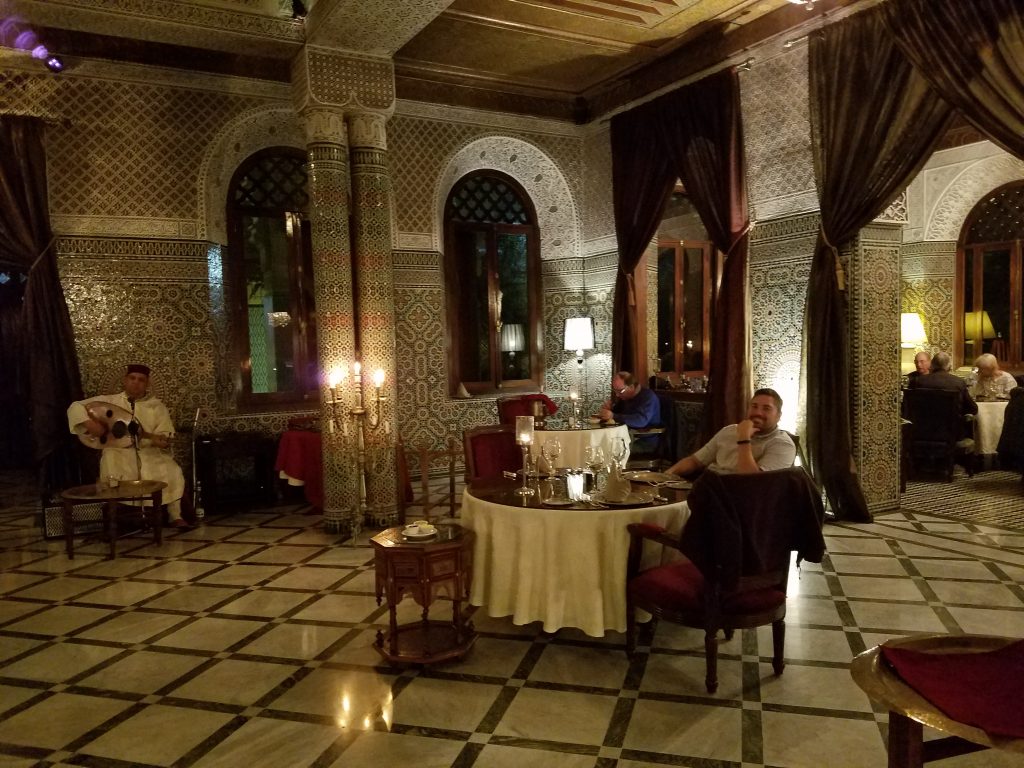 The menu was already making us hungry – there was a Moroccon side and an international side, and we ordered from both. A 7-vegetable mezze platter quickly arrived in 7 small tagines for us to enjoy as the wine was eventually poured (bizarrely slow AND fast service). I ordered a ½ bottle of something similar to a cabernet. It was dry and delicious. We also enjoyed the bread service with olives, hummus, and butter, complimentary. We had debated about going to Comptoir Darna or Azur, two of the places we thought Gate 1 would be taking the group to (which we opted out of), but we were very pleased with our choice. We just did not want to deal with the hassle of belly dancers trying to dance with us and other displays of fake culture, even though it would have been fun. Later we found out that Gate 1 went to an entirely different place, somewhat of a hidden gem, whose name unfortunately we were never able to get.

For dinner, I ordered a Thai chicken curry and Brendan ordered chicken with spinach ravioli. Both were superb. We topped it off with their famous chocolate cake, which was quite honestly the only disappointing part of the meal. 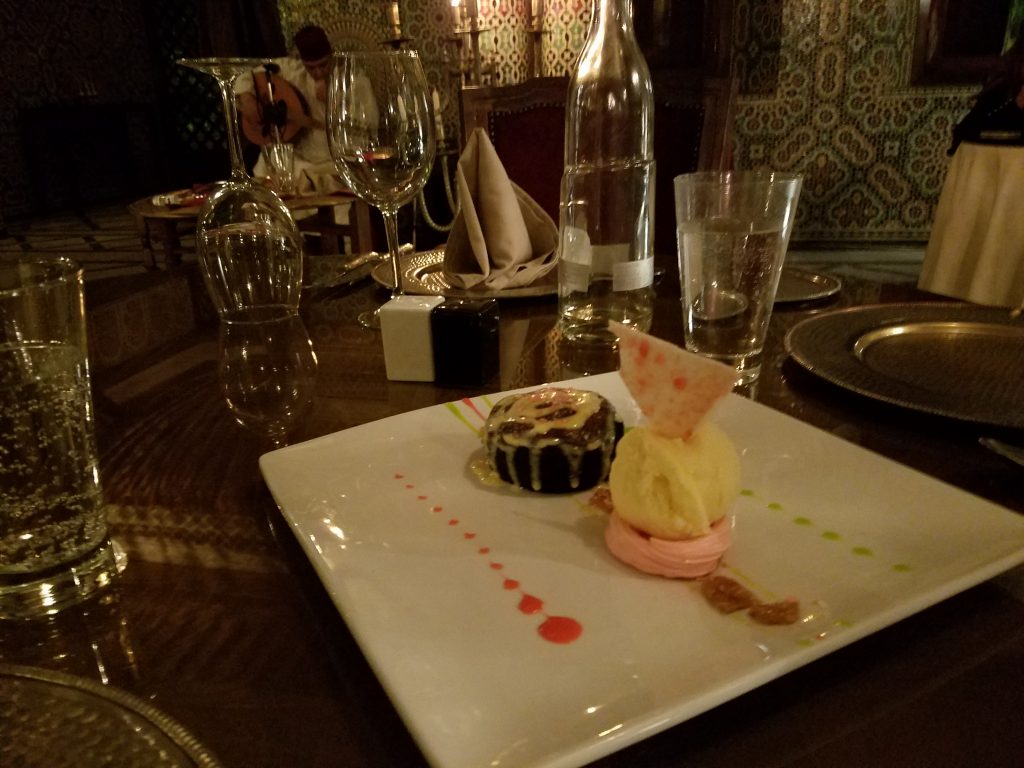 It probably had to do more with the fact that we were stuffed and tired than with the quality. We enormously enjoyed our final dinner and Marrakesh by night experience, walked back to the hotel, packed up, and the next morning were on our way to Casablanca for our final Moroccan city.

One thought on “Marrakesh by night”