On Sunday we woke up around 10AM for a leisurely breakfast at the hotel by 11AM, and a departure 30 minutes later for upstate New York. While checking out, I made a case to receive 50,000 Hilton points back to compensate for 1 award night I used for the hotel stay due to the leaking air conditioning unit that completely soaked a third of the carpet in our room (3208). The desk receptionist said she could do this for me, so let’s see if that actually happens (Magic 8 Ball says outlook hazy).

The journey to Grand Central Station was easy from FiDi. We started on the same 1 line and changed lines at Union (we opted for the route that had us doing the least amount of walking with our luggage outside, since it was sweltering). We arrived with more than an hour to spare, only to find out that they didn’t post the track number until 20 minutes prior to the departure at 115PM. It was a little discombobulated because Amtrak rerouted all their trains that normally would operate out of Penn Station to Grand Central while some lines were under construction, so there wasn’t as much Amtrak infrastructure or information available. So, we decided to kill some time by exploring Grand Central and walked around the mall and the foot court area in the basement for a bit. There was not nearly enough seating for everyone, so a lot of people were simply sitting on the floor or milling around.

Around 25 minutes to go until our train to upstate New York, we went back upstairs and sat by the board, eagerly awaiting the gate. We had researched that the West (left) side of the train heading North was the best side to sit on to be looking out over the Hudson for the majority of the trip, so we wanted to make sure we found some seats on that side of the train. As soon as the board announced Track 20, we rushed the train with a bunch of other people who had also been waiting. They spurred the Albany and Hudson passengers ahead to the penultimate train car, where we were able to find two seats on the West side. 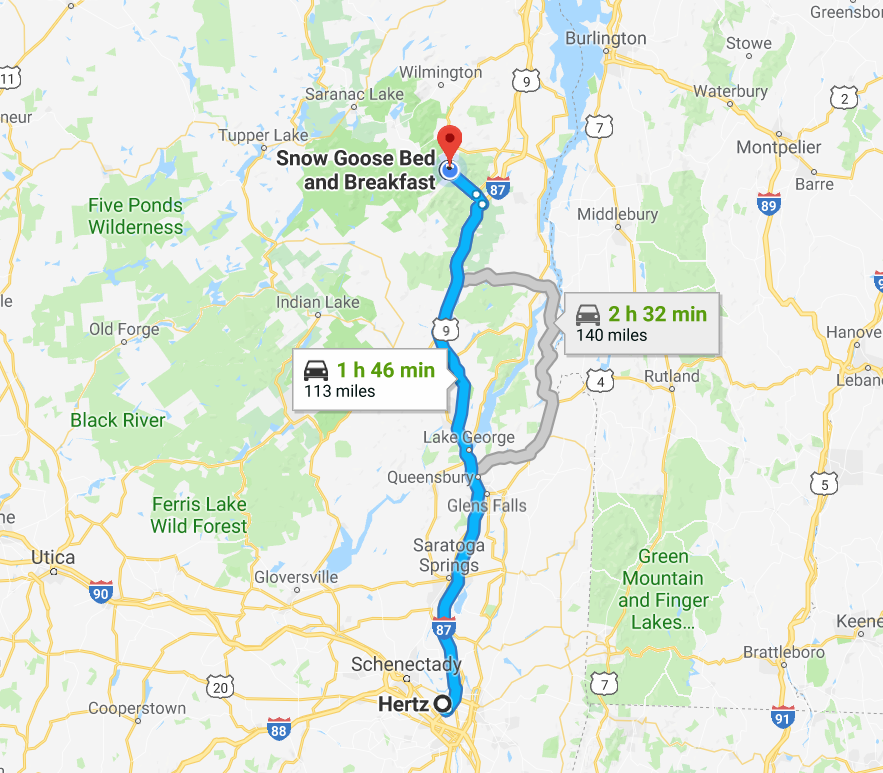 The train ride to upstate New York was delightful, and the scenery was beautiful. This was an example of Amtrak getting it right (as opposed to our miserable 6 hour delayed journey from DC to Raleigh in April 2017). The only thing that wasn’t amazing was the WiFi, which was spotty, as well as a slight 15 minute delay an hour in while they rerouted a train ahead of us.

Mostly, our journey to upstate New York was relaxing with gorgeous countryside and rolling hills set against the backdrop of the Hudson River. We arrived only slightly delayed around 4PM in to the Albany train station, and easily grabbed a Lyft to our Hertz rental car at the Albany International Airport. We would be driving for the rest of the way to upstate New York and the Adirondacks.

It was smooth sailing (albeit in the midst of a totally ridiculous heat wave unheard of for upstate New York) from there on out to our B&B in Keene Valley, nestled in the Adirondacks between Lake George and Lake Placid. It took about 90 minutes to arrive, and while en route we confirmed our lodging with Amy, the B&B owner, and also landed on a 730PM dinner reservation at a place in nearby Elizabethtown called the Deer’s Head Tavern.

We arrived around 630PM to the Snow Goose B&B, and was given the grand tour by Amy herself. Her and her husband had purchases the house about 10 years prior after deciding they needed a change of pace from city life in Pennsylvania for themselves and their 4 kids. Keene Valley and the upstate New York Adirondacks was just the place for them, so they converted the house in to a B&B (which it had previously operated as in former lives), and the rest was history. 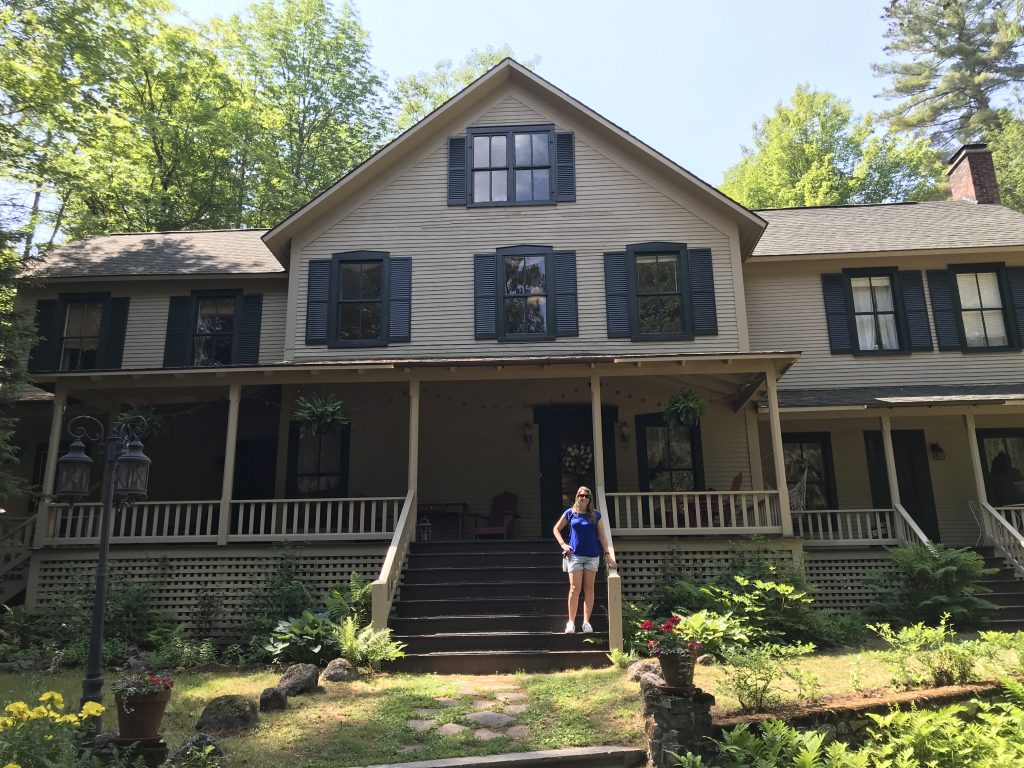 We had a spacious and comfortable room at the top of the stairs which even had a window A/C unit (much needed in the 90 degrees weather). When we were deciding on where to stay back in March, we were told not to worry about A/C because the temperatures were typically in the high 70s. I’m glad we listened to Brendan and went with a place with air conditioning.

We also were thrilled with the location – it was central yet still remote, making us feel like we were really were in the upstate New York mountains. We set off to dinner around 7PM and easily arrived by our reservation. The roads and signage were good to Elizabethtown, which seemed like a nice place to stay as well. We passed through lower Keene and upper Keene on the way (two sides of the same town), passing over the Ausable River several times on our journey.

Deer’s Head Inn was packed and understaffed. We weren’t greeted but instead had to grab a staff member and ask to be seated. Once we were seated it got slightly better, but we waited about 30 minutes for our drinks. As soon as the place started to thin out a bit around 8PM, service improved dramatically. Our waiter was a college looking kid who was actually very on the ball, just overwhelmed. There was a charming blues band of elderly people called the Gray Blues playing that night so we had a delightful distraction while waiting. We ended up over-ordering because we were so hungry waiting, getting not only the poutine, bread, brusselsprouts, and a salad, but also a burger and fries. We decided to pass on dessert given the amount of food still on the table, and were some of the last people to leave around 915PM.

We got back to the B&B soon after, read for a bit, and were in for a long, luxurious sleep.