We again decided to opt-out of the simply hotel breakfast and instead made for Nuevo Arenal once more before our day of howler monkeys and hot springs. It had rained profusely the previous night causing a few power outages, so when we got to town our hopes of eating at Casa Paniaguas, the highest rated breakfast place in Nuevo Arenal, were dashed because it was closed. We later found out that the storms didn’t cause the outage, but rather than it was a scheduled power outage by the authorities for maintenance. Either way, we had to pivot and a local who saw us looking confused directed us to Las Delicias across the street. It unfortunately had no WiFi, but it did have hearty breakfasts. I ordered the pancake, egg and sausage plate and Brendan ordered the local (typico) breakfast. Both were delicious, just like the name of the restaurant.

Once more our goal was to sustain ourselves until dinner at Gingerbread, and we knew we would have a long day howler monkeys and hot springs ahead of us, so ample sustenance was required. After this breakfast we decided to go have a second breakfast at the German restaurant to get our Wi-Fi fix (really just coffee, and pretzel for Brendan). We reviewed the results of the home inspection in Denver and formulated a plan for the items that needed to be addressed.

We again headed out towards the La Fortuna area around 1030AM towards a day of howler monkeys and hot springs. Our first stop was Mirador El Silencio, another national park recommended by Dirk with an entry fee of $8 per person once more. Since it had been raining furiously the night before, and continued on and off during the morning, the park was quite empty. We were not sure it was even a great idea to hike, but we donned our ponchos and set out nonetheless. There were only two other cars in the parking lot. 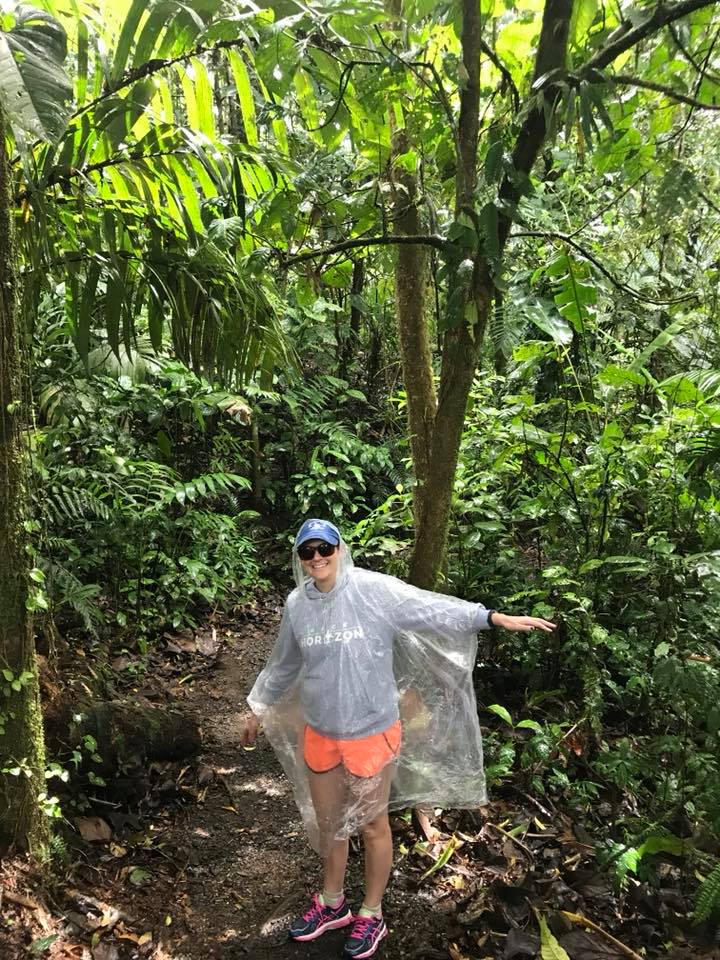 We again took the longest route we could, bypassing the lava field we did the previous day (route 3 and then route 4 back) – it was only about 4 km and was much easier than yesterday’s hike. This hike took us through denser and older forests where we were told by the park manager that howler and spider monkeys could be viewed. For the first half of the hike, we saw virtually no wildlife save some fleeting birds, insects (leaf cutter ants were abundant), and a few squirrels. 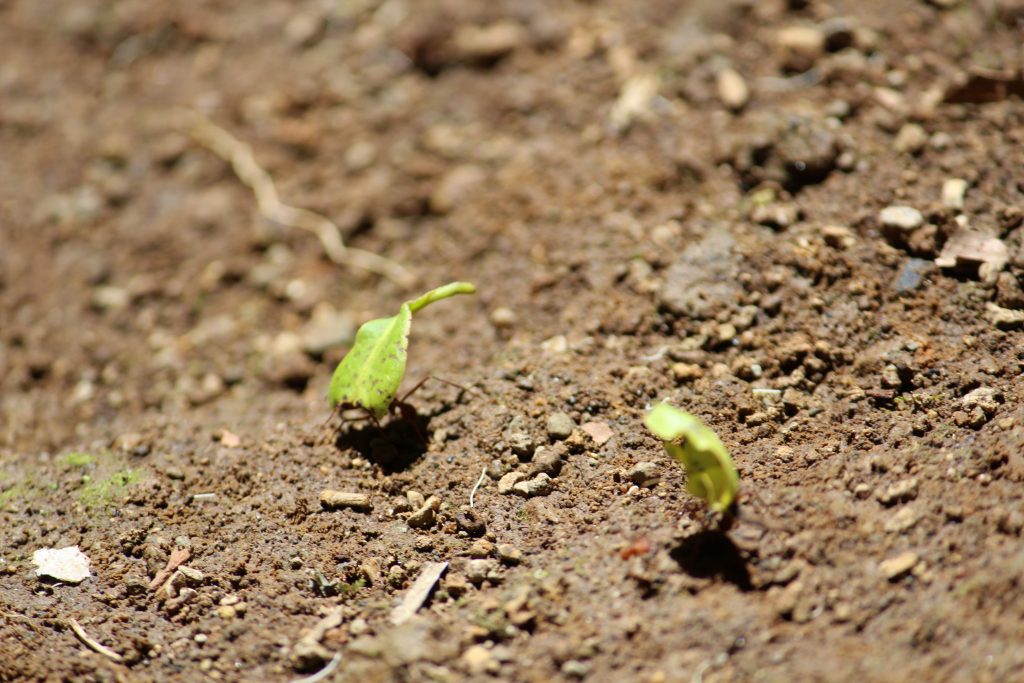 After we turned the corner after the summit, however, we were rewarded by a tribe of howler monkeys. Brendan thought he saw a tree move out of the corner of his eye, and then I spotted one, giving way to about 10 more spread-out through the tree line. We lingered for about 30 minutes, learning how to imitate their sounds and even hearing an alpha male puff up and do the typical “howler” sound when some other hikers approached. The passing hikers mentioned that I did a good job imitating the monkeys. If I ever moved to Costa Rica, I now had at least one possible vocation. 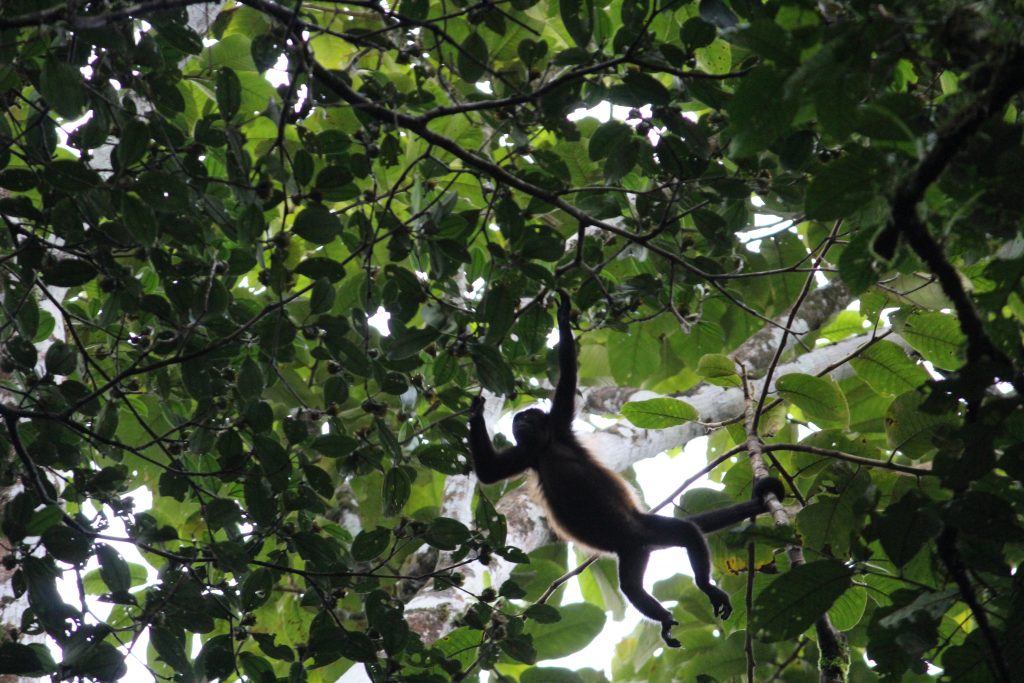 We returned through the forest’s edge that abutted some farmland, and saw horses, cattle, and coati on the return. The whole hike took us 90 minutes and generally was very easy, but rewarding. It rained on and off for the first hour, but eventually we were able to remove our ponchos. 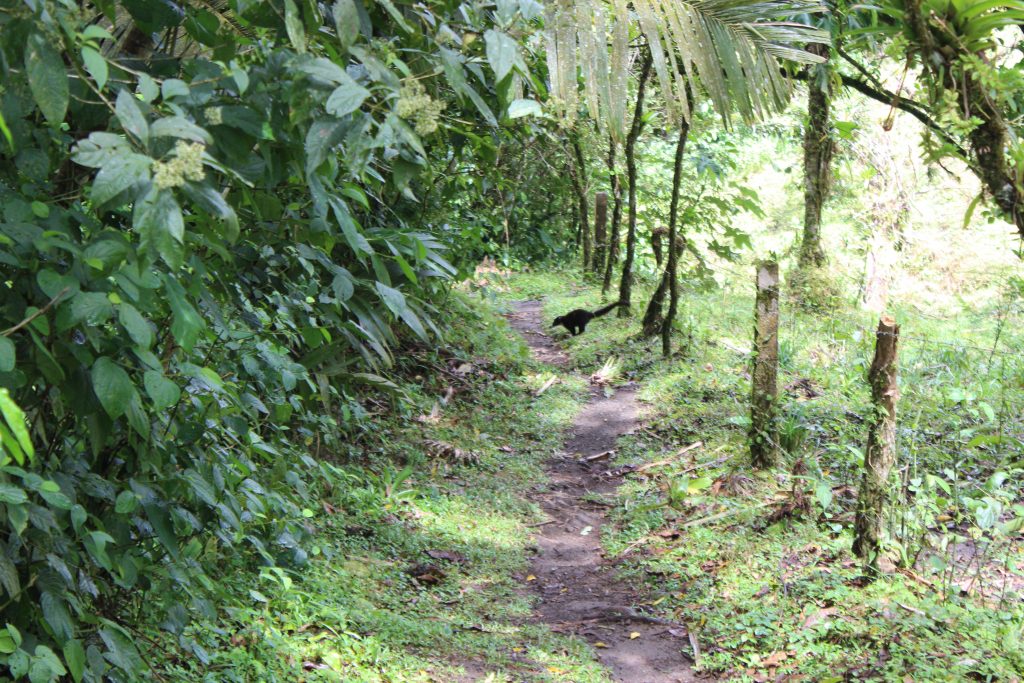 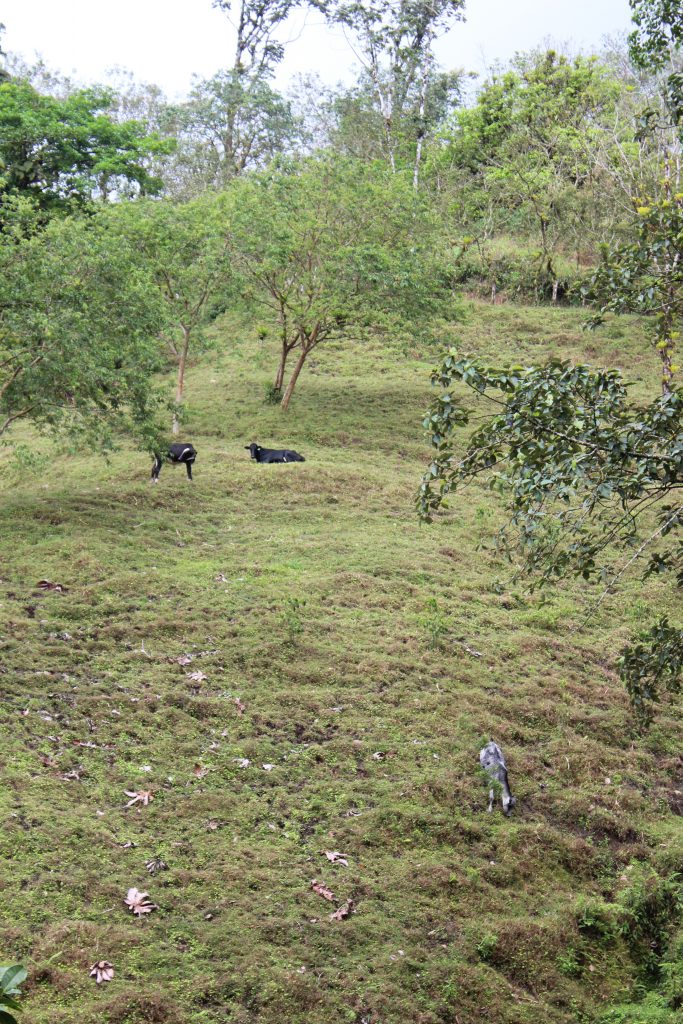 A great day of howler monkeys and hot springs

Since we had not actually planned out the rest of the day, Brendan had the idea of howler monkeys and hot springs. So we set out first to Tabacon, the fancy hot spring resort we had passed a few times on the way to La Fortuna. I was not very interested in the hot springs, because they seemed to be contrived amusement park like setups, similar to the one we had visited in Steamboat Springs in Colorado over the summer. I protested a bit but eventually agreed to give it a whirl. Tabacon was unfortunately a bust. After 10 minutes trying to park (it was a mad house because it was located next to the hot river, which we think was free even though it appeared parking was not), we determined at the entrance that it was $60 per person without lunch or drinks. Too rich for our blood, so we continued to plan B – another Dirk recommendation called Paradise Hot Springs further towards La Fortuna.

This one was more our speed. It was not crowded and it was $28 per person with a $15 deposit each for towels and locker keys. We paid the entry fee, changed in the clean locker rooms in to our suits, took a lap around to get our bearings, and then settled in to the first 95 degree F pool near the bar. We ordered two fruity rum drinks with little fruit garnishes and enjoyed lounging for the next two hours. 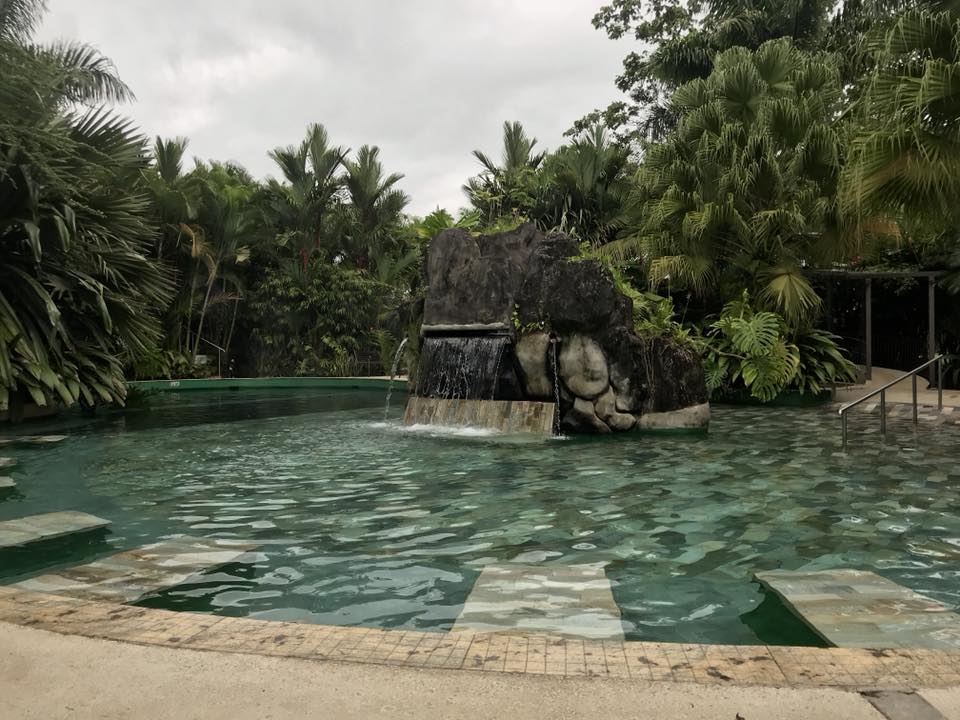 Brendan had it right. What was better than howler monkeys and hot springs? Nothing I daresay.

As we started to turn in to prunes, and after we had sampled a few other pools and the rain had begun again, we decided to grab some seats under an umbrella and get a WiFi fix. There was literally WiFi everywhere except for our hotel. Sigh. We took care of a few more documents and emailed for the closing of our new Denver house, and basked in our sense of accomplishment for the day.

Around 4PM we had enough of howler monkeys and hot springs, agreed that we had gotten our money’s worth, dried off, got our deposit back, and went for the last time on the road from La Fortuna back to Nuevo Arenal. We made it back again in time for sunset, and enjoyed some final parting glances of our beautiful patio overlooking the lake and the Ceiba tree. This was a special place.

Our final night in Costa Rica was wonderful. I drove us to Gingerbread in one piece in the on and off torrential rain, and we settled in for an interesting night, after a rewarding day of howler monkeys and hot springs. We arrived 15 minutes early and went up to the bar, explaining we had a reservation. It was chaotic, but the bartender/waitress basically told us to go outside and look at the menu to decide what we wanted to order, and then to take a seat. Brendan did a very smart thing and took a picture of the menu so that we could take it with us. 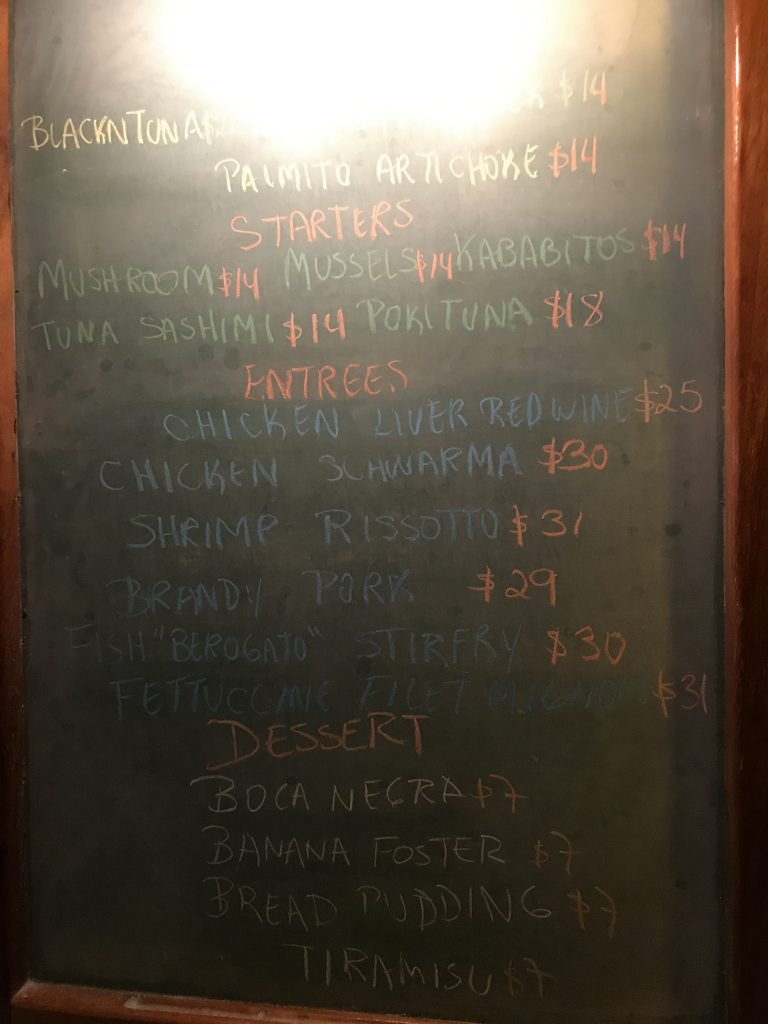 A friendly expat local immediately struck up a conversation with me about Denver and marijuana, and then regaled me with a story about Gingerbread’s chef and the bar that he had apparently help build (by crafting it from a tree nearby). He invited us to take a seat at two openings on the other side of the bar. Once in, we tasted a few wines and decided on our drinks. I went for an Italian red blend and Brendan had margaritas followed by vodka sodas. We started talking with a couple from Florida next to us who were staying at the B&B, and gave us some recommendations for entrees.

Food was hard to order without being aggressive due to the business. We eventually had to butt in and get the waitress’s attention since she had forgotten about us, more or less. We started with the mushrooms and the greek salad – service was slow, but worth the wait. The mushrooms were cooked in a cream sauce, with a heaping portion of garlic bread on the side which we used to soak up the remaining sauce. We were warned by the Florida couple to eat the hot appetizer before the cold appetizer, or else the chef would yell at us. We did what we were told!

For our main, we decided to share the fettuccine alfredo with filet mignon – judging by the portion sizes it was useless to order separately. We continued chatting with the Florida couple, and shared our day of howler monkeys and hot springs, but ultimately got a little bored of the conversation – the lady was fine, but the dude was a super redneck, embarrassingly American. He had all sorts of notions of Costa Rica that were just not true, stemming clearly from lack of travel, knowledge of the world, or really knowledge of anything out of Florida. He was a nice guy, but lacked refinement. Towards the end of the night, we started chatting again with the expat that greeted me (who became the bartender after the chef plopped on the couch in a mushroom induced stupor – the *other* kind of mushrooms), and the Florida guy thought he could retire in Costa Rica for $1M. The expat wryly and subtly replied (and it was lost on the Floridian) – the best way to be millionaire in Costa Rica is to bring $3 million.

We had to do a cash inventory check before ordering dessert. We realized we were beginning to rack up quite a bill and couldn’t assume that credit card was OK, so we did a quick check with the waitress and she confirmed that she could take a credit card, but she’d have to add 5%. That was all we needed to know so that we could splurge on a dessert each – boca negra and the bread pudding. We unanimously enjoyed the bread pudding the most.

The place started to die down around 9PM and we took our leave, $150 poorer, 30 minutes later. The food, “hospitality”, and ambience all certainly made for a memorable last night in this easy and beautiful country, after a memorable last day of howler monkeys and hot springs.

We were glad we came, but our thoughts began to turn to Denver again. With that, we made our exit. I drove us home in one piece, we fell in to bed, and had a fitful night’s sleep due to the rich food and the on again off again torrential rain over our heads.

One thought on “Howler monkeys and hot springs”