Three weeks ago I landed in Hong Kong after a 20 hour journey from Denver in United Polaris Business, connecting in ORD, and saw Hong Kong in 2 days before getting to work. I had about 6 hours of solid sleep due to the lie-flat pod, and felt pretty good upon landing and hitting HKG at 6PM Wednesday evening (3 May 2017). Here’s a view of the pod. 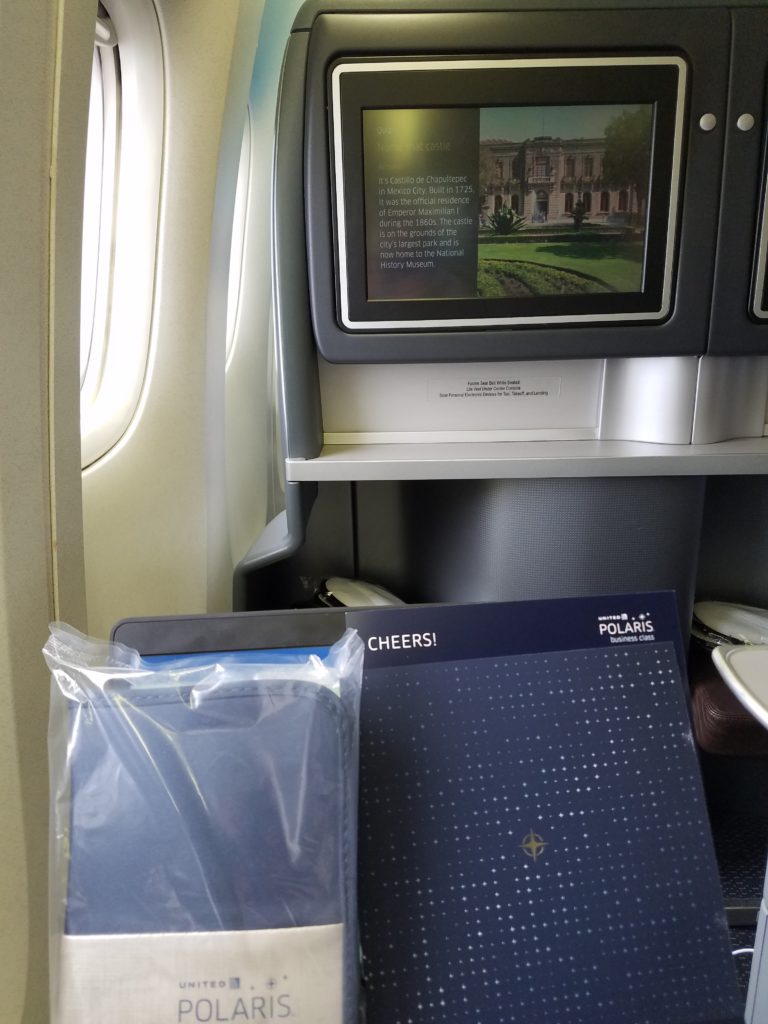 I cleared immigration and collected my luggage within 20 minutes of landing and was able to order an Uber easily thanks to the free Wi-Fi. Finding the pickup point for the Uber was a little more problematic – Car Park 1 was not clearly labeled with signage and pretty soon I found myself just outside the airport and asking around. Luckily, the information kiosk was staffed with an English speaker who pointed me in the right direction. I walked up just in time as the Uber rolled by.

It took about 45 minutes to get from HKG, which was located on a nearby island, to the central business district of Hong Kong where my hotel, the Conrad Hilton, was located.

On the way, the Uber driver (who spoke English very well), gave me a bit of the lay of the land. He pointed out that most of the new high-rise constructions were private apartments, and that Uber had been in the region for about 5 years (two unrelated ideas). I asked him how fare away the giant Buddha statue was, and he said it was about 45 minutes from the airport and that I should carve out about 4 hours including transport from Hong Kong to see it. I took a mental note that I would have to save this for another trip. He also suggested to avoid Stanley Market because it was more touristic, and to check out the Ladies Market and the markets in the Mong Kok area instead as a more authentic experience.

$350 HKD later, I arrived at the Conrad around 730PM. Check-in was prompt and I made it to my room shortly thereafter. It was a lovely, spacious room on the 44th floor (Room 4410) that overlooked the city. 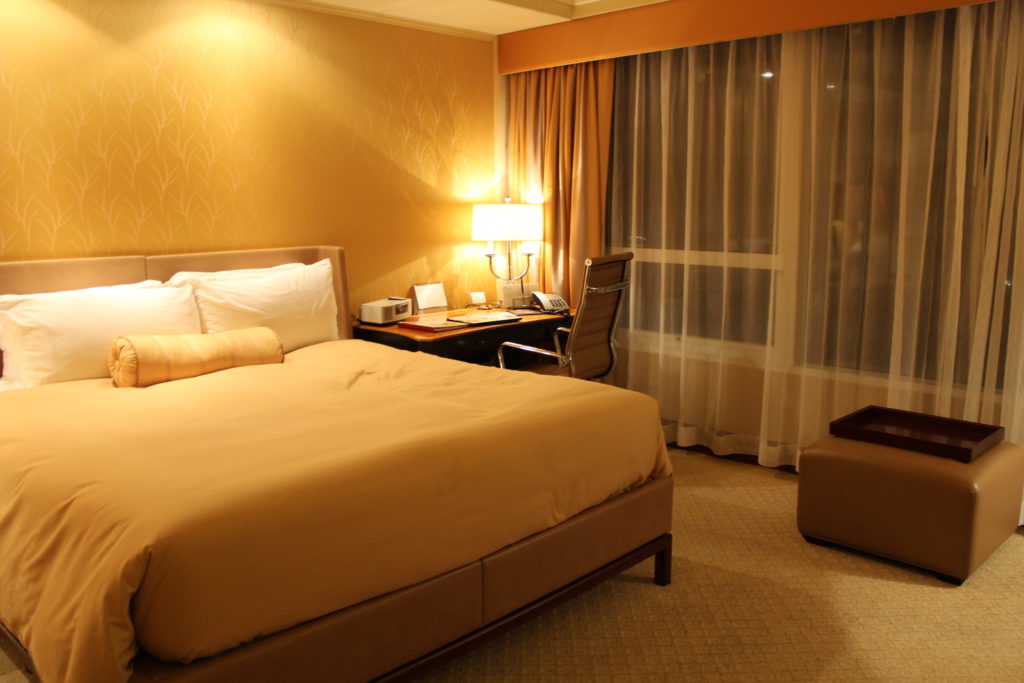 Conrad Hilton – my base for 2 days in Hong Kong

I was pretty stuffed from the constant service on the airplane, so I actually skipped dinner and forced myself to stay up as late as possible. I did munch on some fresh fruit left in the room for me, however. I mainly spent the night in the hotel room unwinding, doing a bit of work, and prepping for the hackathon that would take place Friday-Monday (with a mentor event on Thursday). I also did some research and booked a few Viator tours – the local market tour in Mong Kok (Thursday afternoon) and a Friday morning dim-sum experience.

The next morning I took it easy and got rolling around 11AM. Here was the view from my hotel room (although it was mostly rainy and hazy all day). 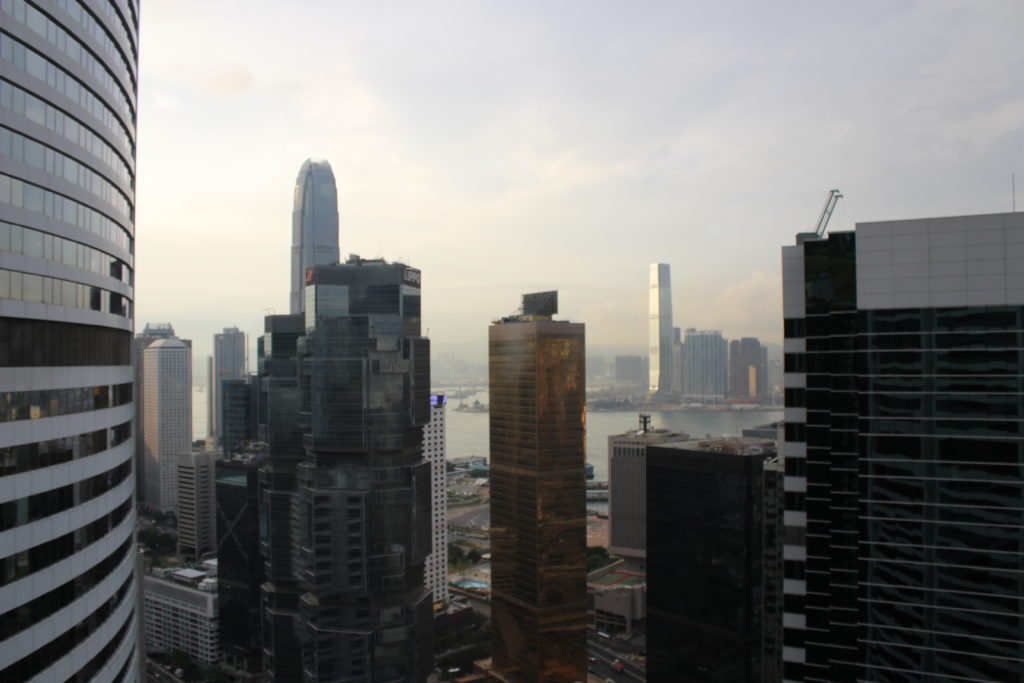 I ventured our around 1230PM and took the MTR (the local subway) across the river to Mongkok to start the markets tour around 2PM. It took me about 15 minutes to walk to the MTR station, located through the mall connected to the Conrad at the Admiralty Center. I remembered that I probably needed cash, so I stopped at an HSBC bank in the mall along the way and withdrew 1000 HKD ($120).

Once inside the underground, I had to figure out how to buy a ticket. There were kiosks that were really easy to use. You simply hit the stop you wanted to travel to on a large map, and it told you how much money to insert. I tried inserting one of my 500 HKD notes, but it was rejected – apparently nothing more than 20 was accepted. So, I had to buy the ticket from the agent. First, I stopped by Marks & Spencer and bought a chicken sandwich to much on while I waited in the line to buy the MTR ticket. 5 minutes later, I had it all sorted out.

The MTR was easy to use, clean, intuitive, and fast. I easily reach the Jordon MTR stop in Mongkok to begin my first real Hong Kong in 2 days experience. The tour guide was waiting so was was Camie, a colleague from Travelport who joined me for the HackHorizon event. We started out walking from the Jordan MTR in to the flower market, avoiding the rain by the nicely provided awnings shielding us. 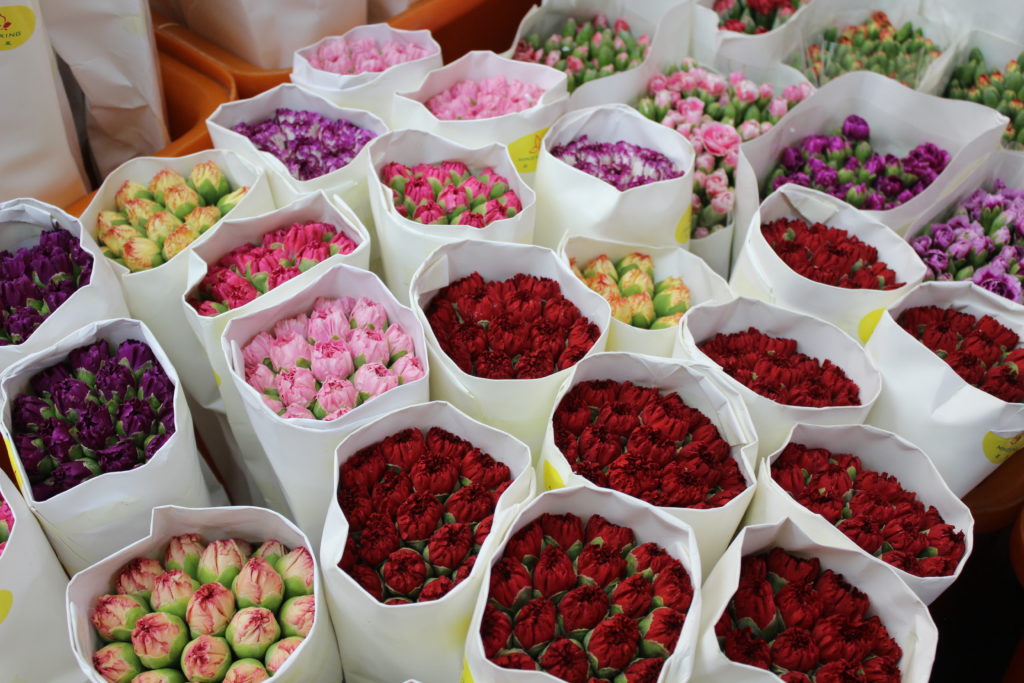 After walking through the flower market, where we saw plants, flowers, and specialty arrangements (across the entire gamut of price ranges), we continued on to the bird market, another novelty that can’t be missed on a tour of Hong Kong in 2 days. The bird market was exactly what it sounded like. 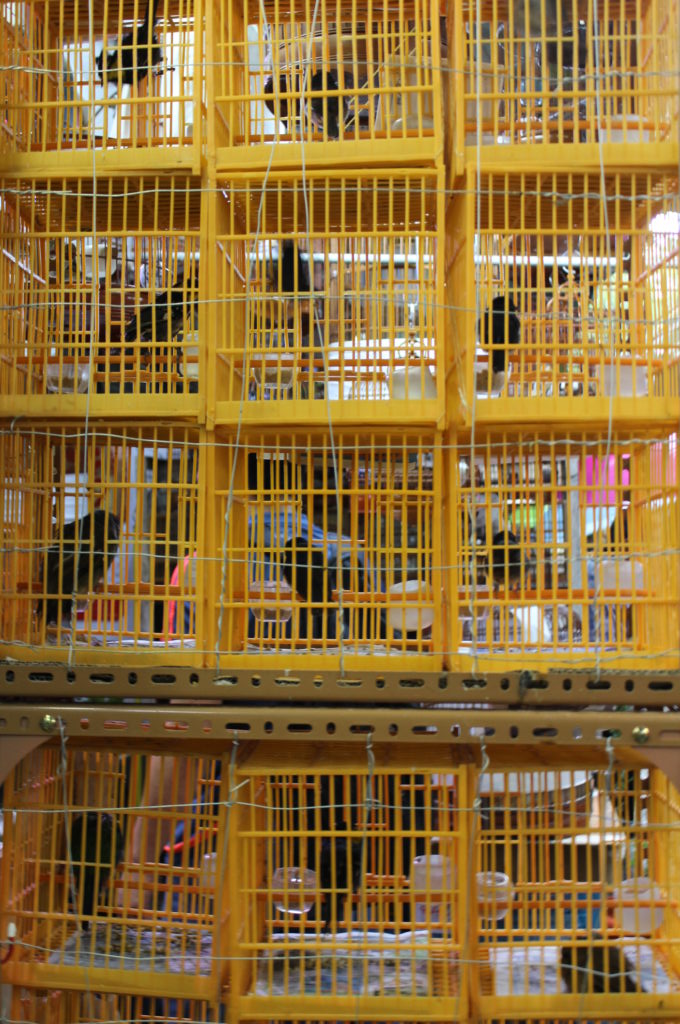 My favorite part was the birds perched on the sign for the bird market, Yuen Po Street. 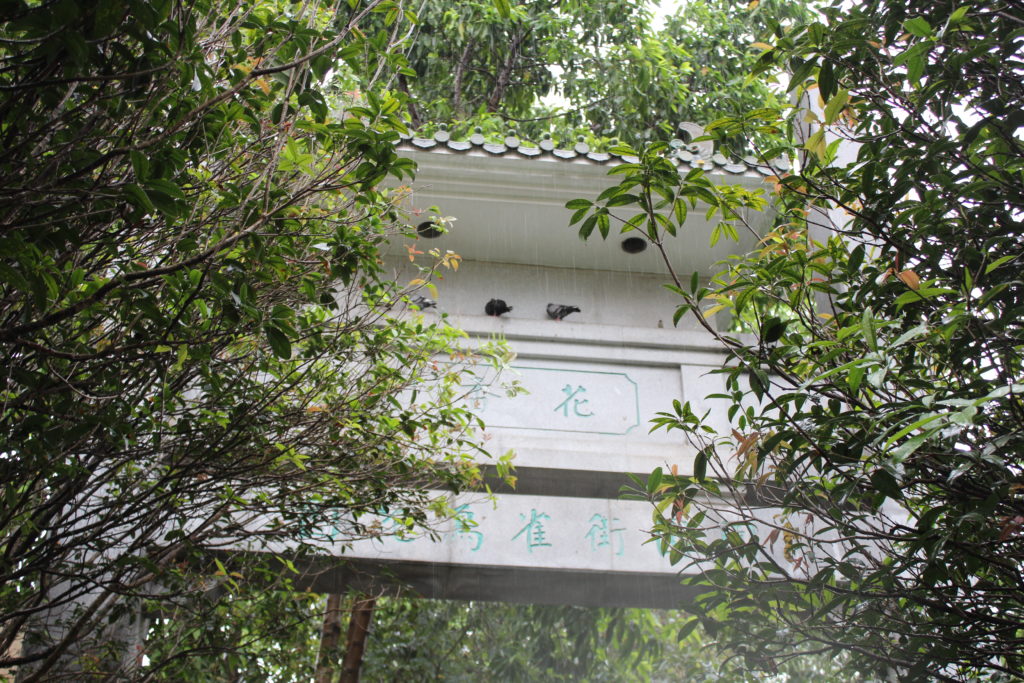 Bird market – must see in Hong Kong in 2 days

Although I can’t actually verify it says Bird Market on this sign….

Then, we walked back towards the center to see Fa Yuen Street, and on the way stopped for delicious egg tarts (eggy, but yum!). This apparently is a British thing (we had a Brit on our tour), that was modified in Hong Kong during colonial times to include extra egg, which locals preferred. 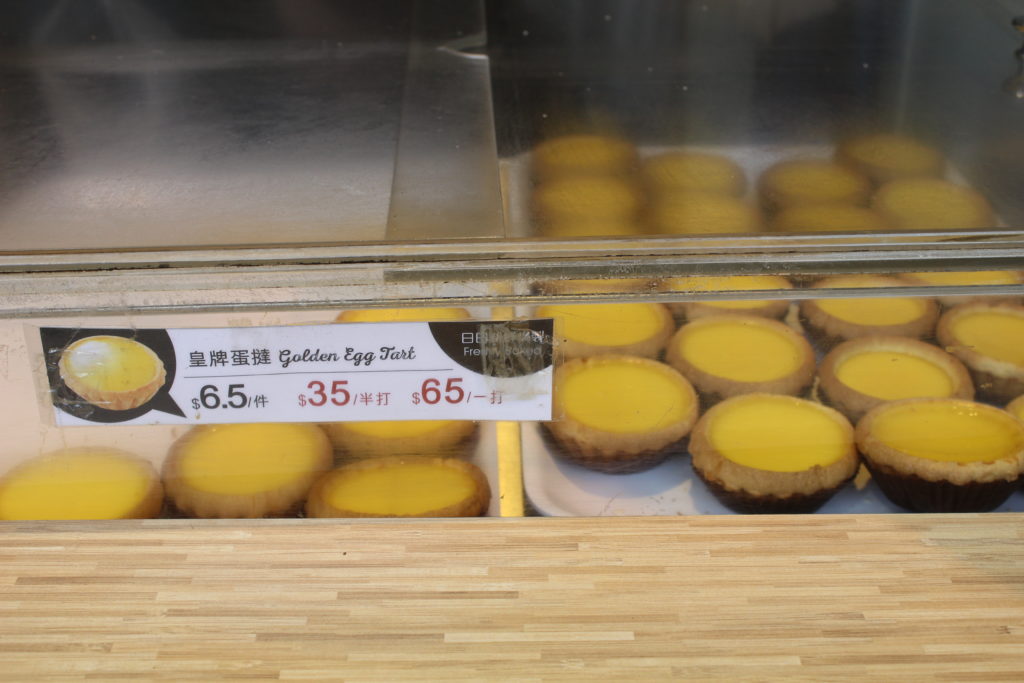 On Fa Yuen Street, we had some time to explore and sample more delicious items, like fruit smoothies! I had some de ja vu to Brazil and my time in Manaus with Tarek 🙂 This time, dragonfruit and pear was in the mix. Camie had a dragonfruit ginger. 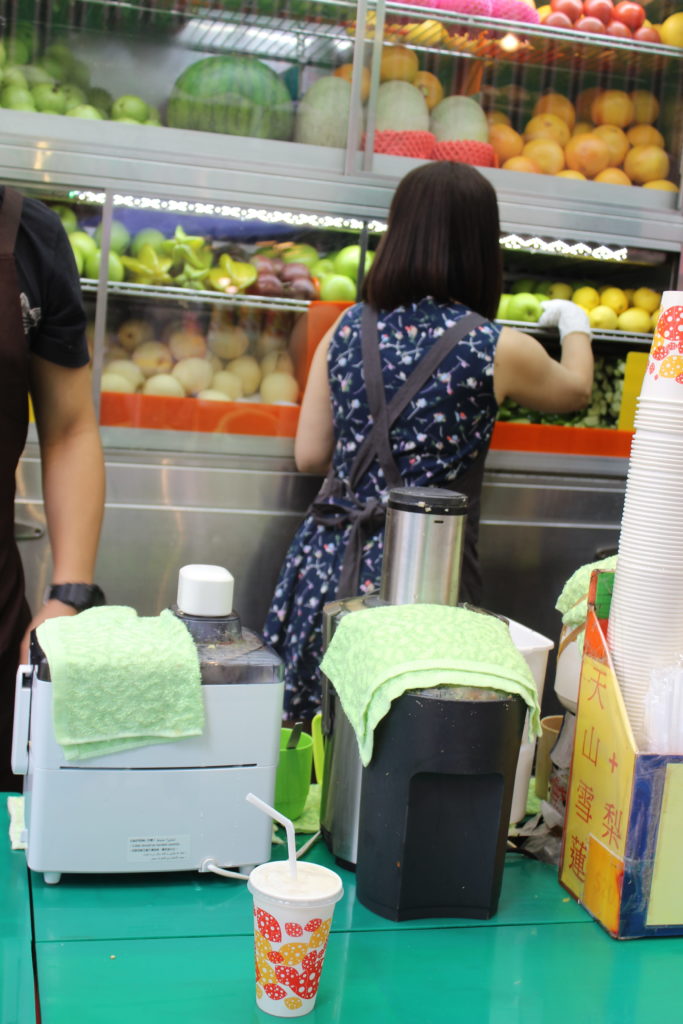 We walked around the markets some more – unfortunately this market really opens at night so the stalls were just getting set up – but the area was still bustling with residents and tourists alike. Here’s the street from above. 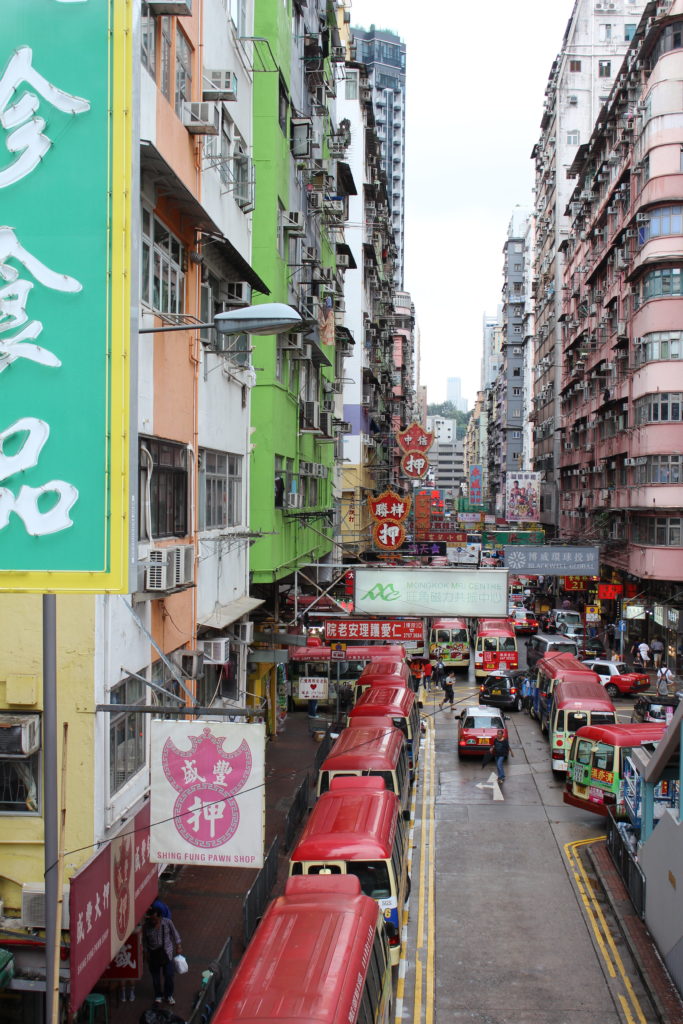 Continuing our tour of Hong Kong in 2 days, we walked through the fish market (for pets, not to eat) and saw tons of small fish in plastic bags ready to be sold. 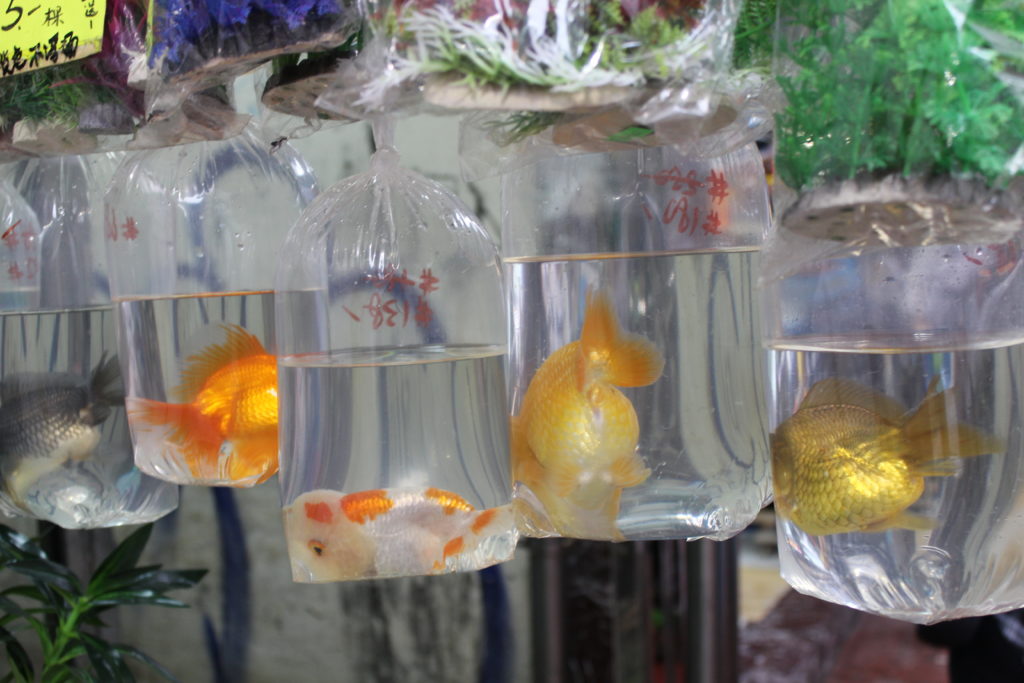 Outside one of the goldfish stalls, I saw this amazing dashboard in a car parked along the street. 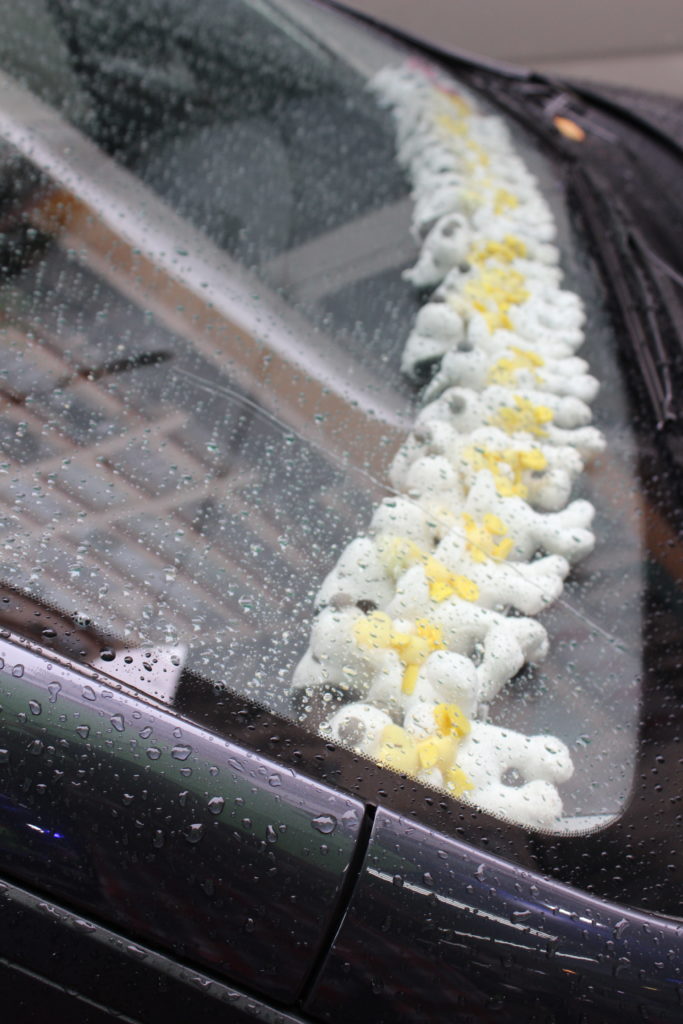 We then made our way to the modern mall, Langham Place, a contrast of “old vs. new” in this bustling city. On our walk we passed a mah jong parlor (it looked like a casino from the outside) which was located next door to a hotel where you could rent rooms by the hour. Camie and I had a chuckle. This was also next door to the tea store, which sold cups of matcha tea as well as hemp tea. Matcha is a green tea extract that the locals are wild for – we even found matcha flavored Kit Kats, and Camie claimed they were good. Camie ordered a hemp tea and said it was awful, offering me to taste. I didn’t take the bait for once and declined! (Try this, it’s awful!)

I enjoyed taking in the architecture over a too sweet lemon ginger tea. 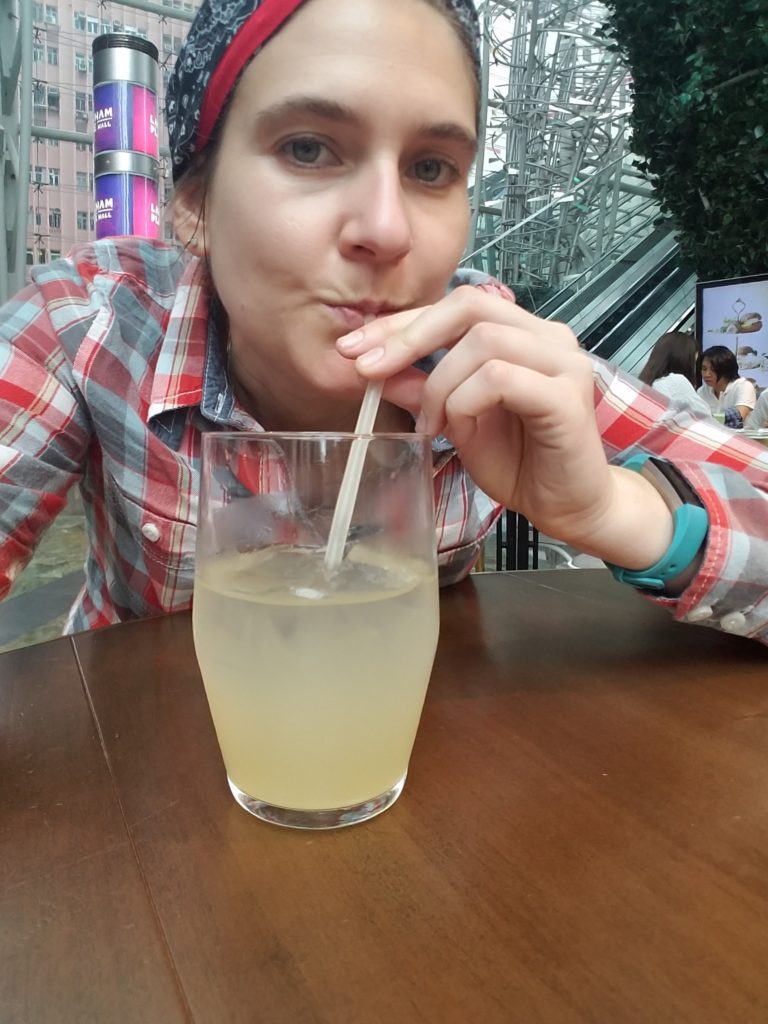 The modern art was a nice contrast to the traditional pagoda style architecture outside. 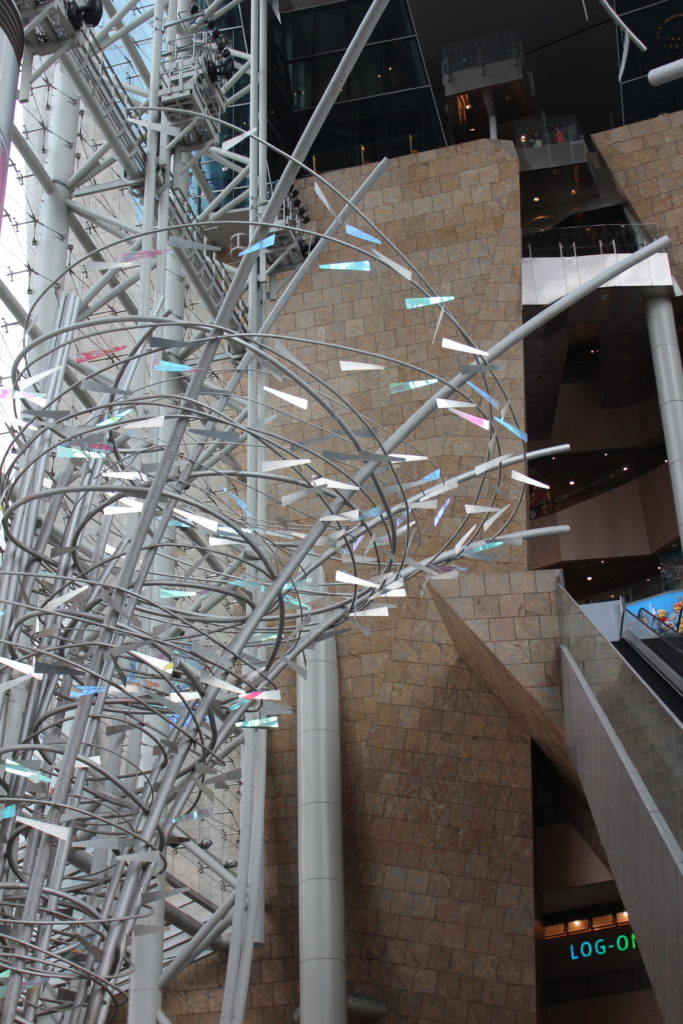 We even enjoyed the sculptures. What you can’t see on the opposite side of this seemingly traditional Communist style “worker” is that his other hand is holding a smartphone. Just another day in the life of Hong Kong in 2 days. 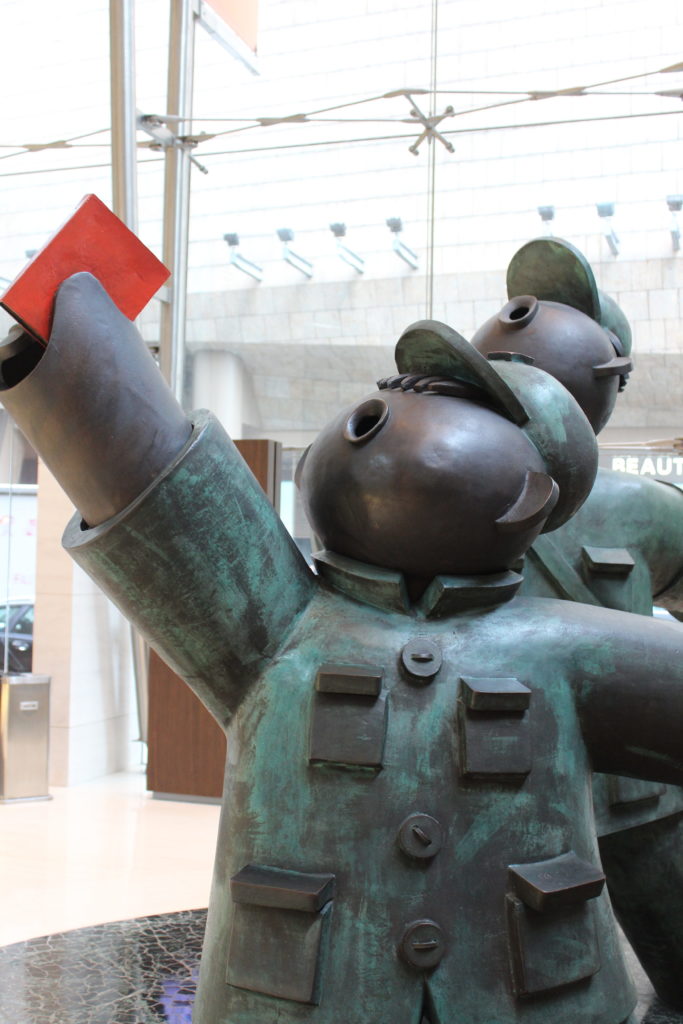 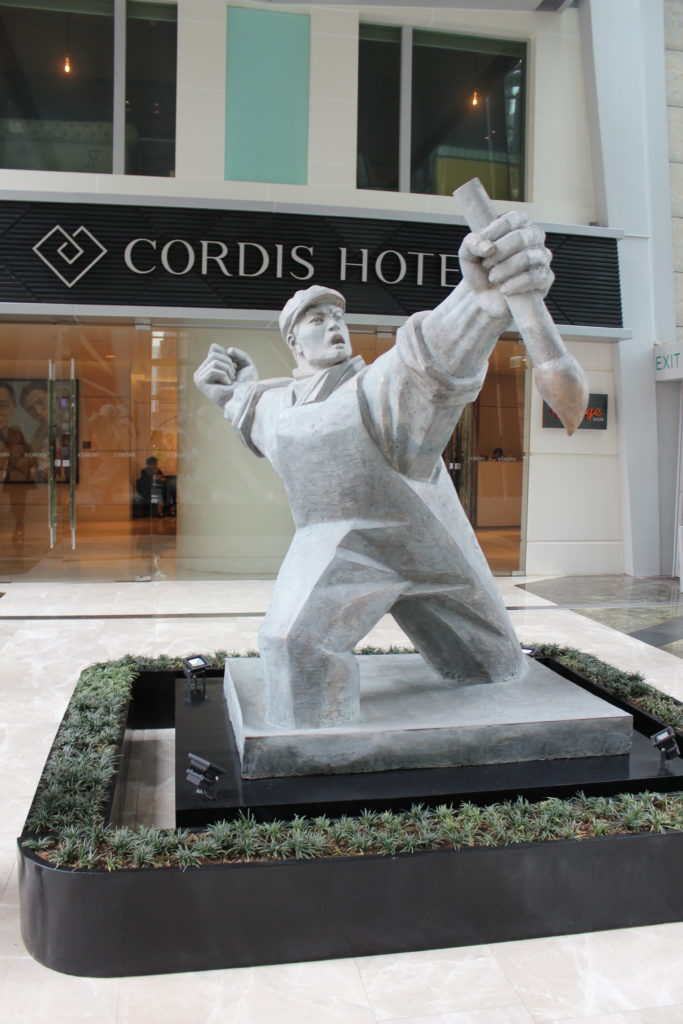 Next stop: the fruit market. All sorts of fruits were on display including stinky fruit (durian), huge apples,tasty grapes, dragonfruit (below), and countless more – most of which I recognized but a few I didn’t. 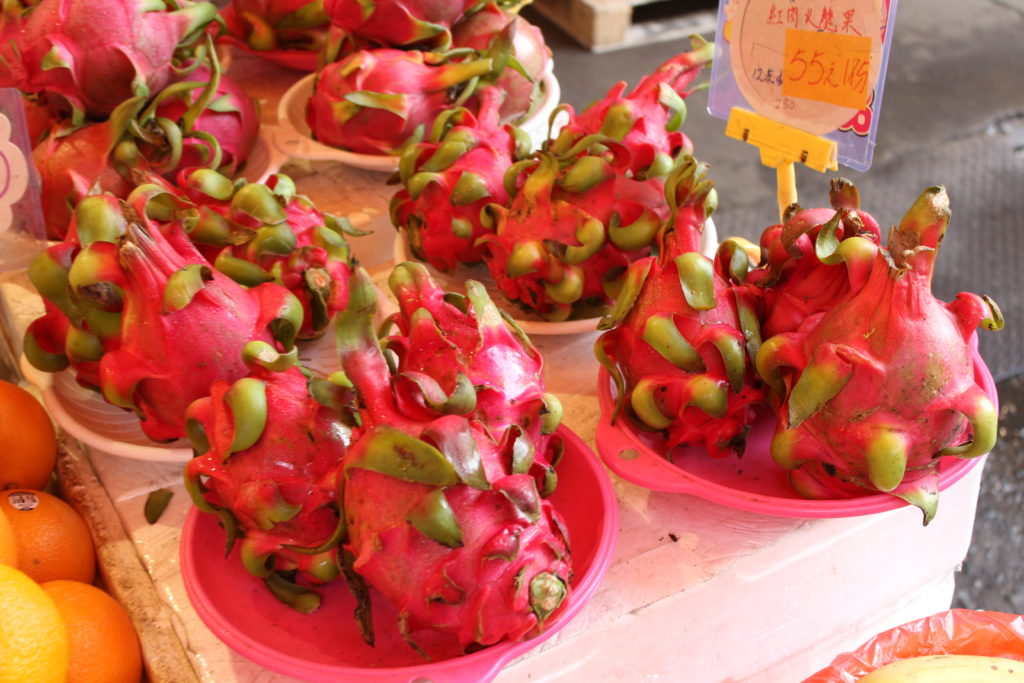 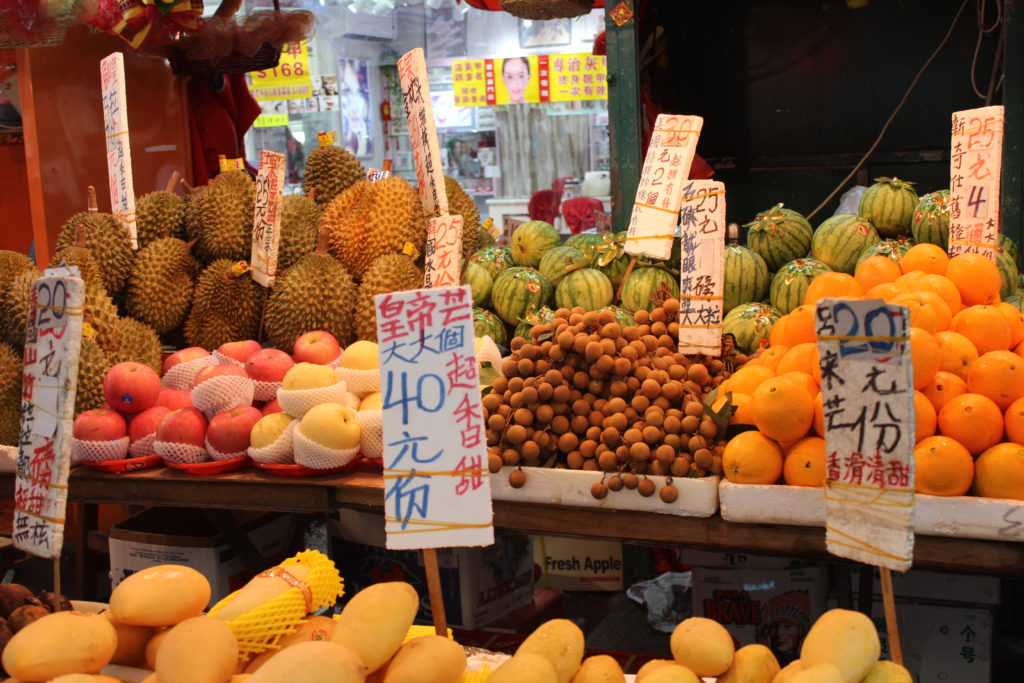 A lot of the fruit is actually shipped in from Australia, New Zealand, and of course mainland China. The apples (back left) were some of the biggest I have ever seen, as were the grapes. 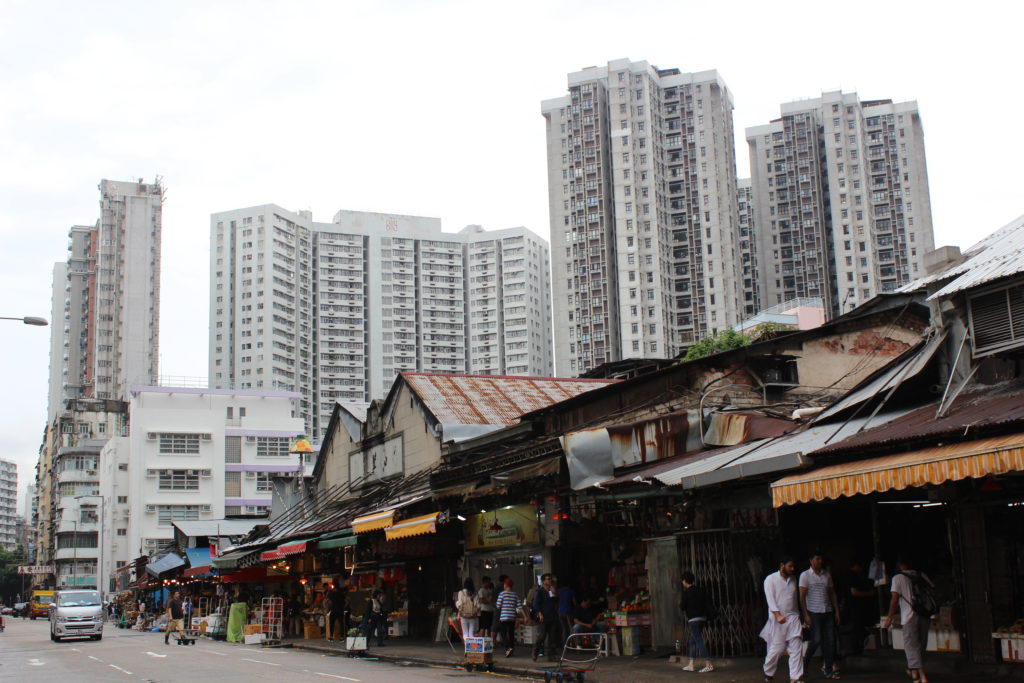 After the sights, sounds, and smells of the fruit market, we ended our last few stops in the area of Temple Street where the night market really thrived. I took a quick pass through of the jade market and ended up buying some jade earrings for $20 after bargaining down from $80. Hong Kong street vendors love a good haggle. You can tell it’s real jade if it’s cool to the touch.

After the religious experience of bargaining, it was appropriate to subsequently visit a Buddhist temple. 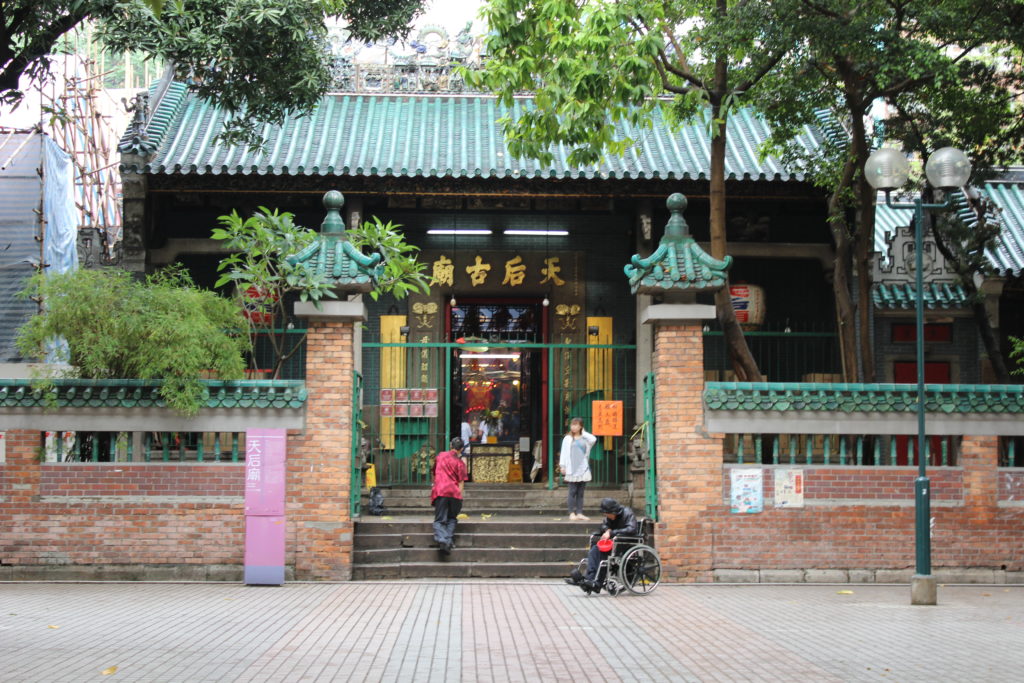 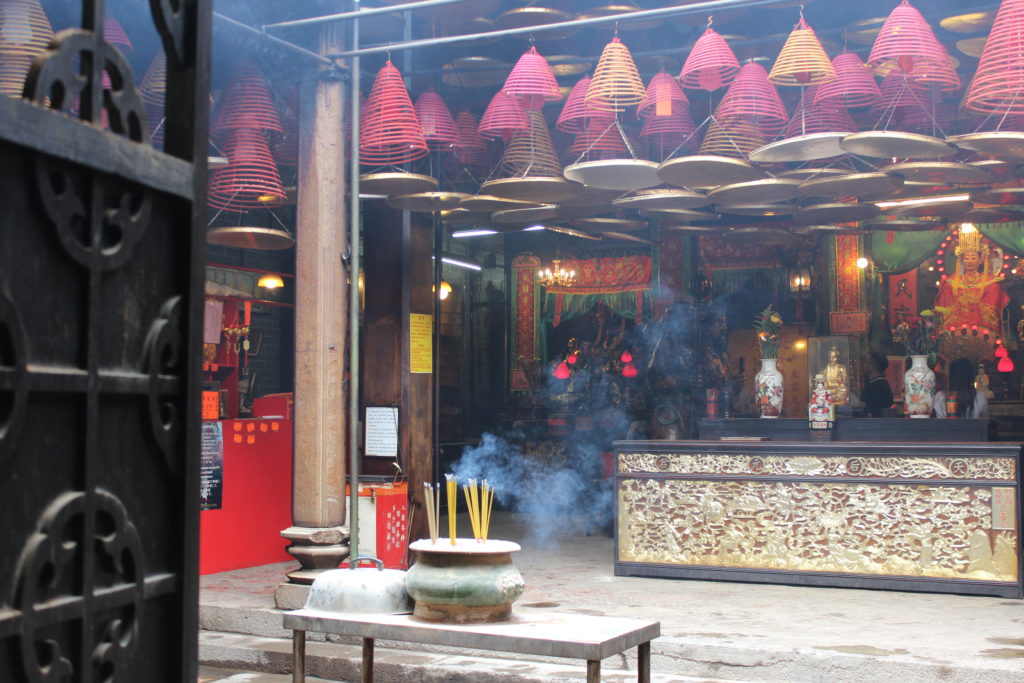 Lots of incense was burned (sandalwood?), prayers were offered, donations were made in money and food – it was kinda similar to some of the Hindhu poojas (prayers) I witnessed at the small temples scattered throughout the neighborhoods. Shoes, however, were not required to be removed. The temple was also the first place in the entire city that I saw a beggar – there were no beggars or street performers anywhere, including in the MTR stations – but there was one in front of the temple.

We ended the walking tour in front of the Temple market gate. Camie and I wandered through briefly, but had to part quickly to get ready for our HackHorizon mentor event later that evening. 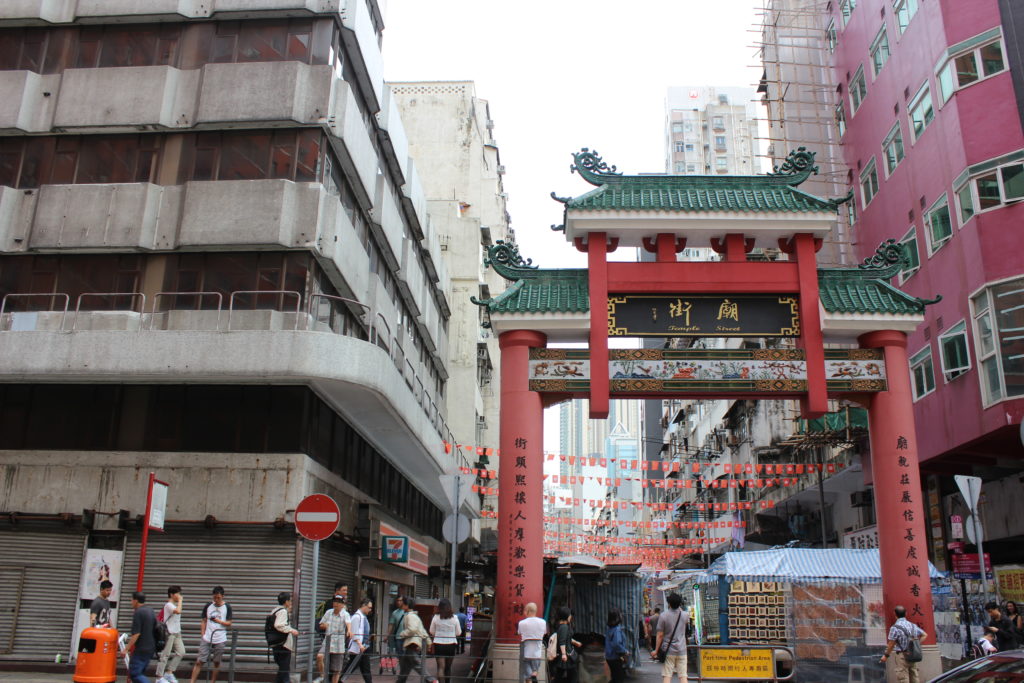 That basically sums up the market tour and the beginning of the Hong Kong in 2 days trip. In the next blog, I’ll focus on the food – dinner and dim-sum – and Victoria Peak and Uber adventure.

May 29, 2017
Travel No comments therestlessroad

← A day in Doha Hong Kong Dimsum and food – an experience →