For the past week, I’ve been on the Caribbean island of Curacao on a business trip, with a little leisure mixed in. I got in on the Monday of Labor Day (Sep. 7) and was able to stay until Saturday, at which point I’d be flying to Cuba to spend the entire next week. I had one full day to relax at the Hilton Curacao Resort where I was staying until the workshop began on Wednesday morning – I had 3 days of content to deliver, and as always, had more material than time! The workshop itself also took place at the hotel, making the week pretty painless in terms of logistics. Here’s the hotel… 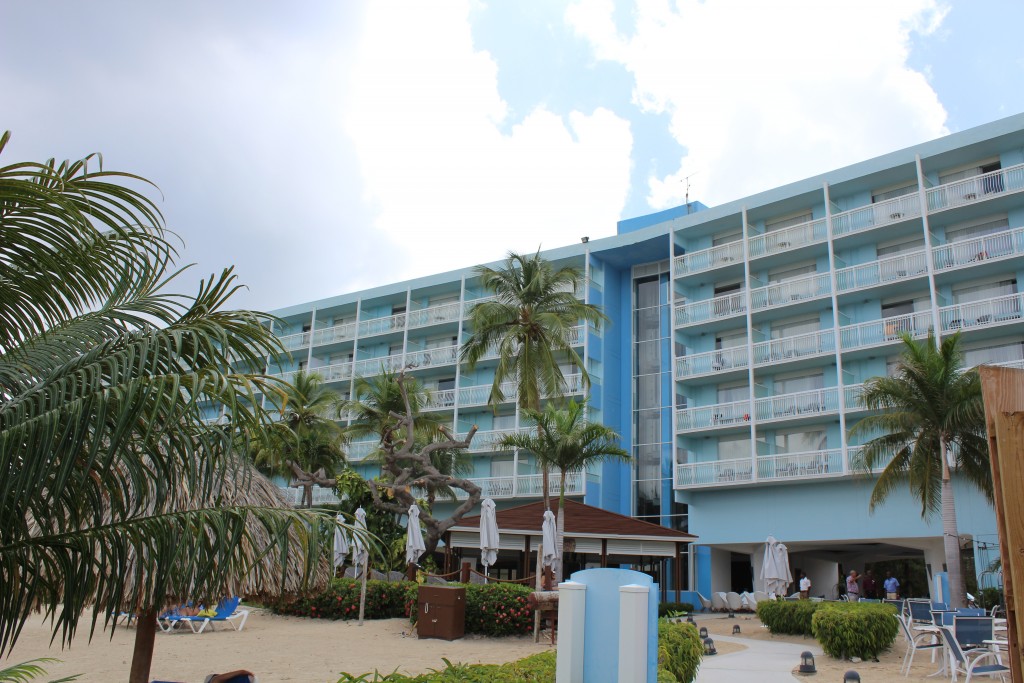 And the view from my room didn’t suck either – the beach was killer and there were nice balconies to be mesmerized by the clear blue-green water daily. 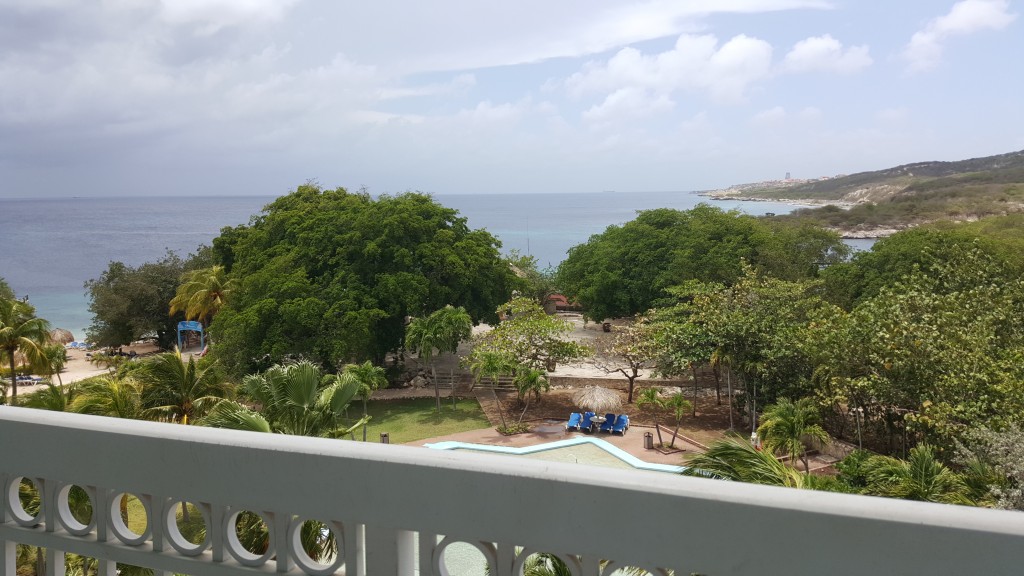 It made up for the fact that the room needed updating (as did the rest of the hotel).

I came to Curacao (pronounced Cure – a – sow) to conduct a training to one of our Travelport distributor partners in the Caribbean on the API product I manage. I was joined by a few other folks from Travelport, who ended up making the trip a lot of fun. 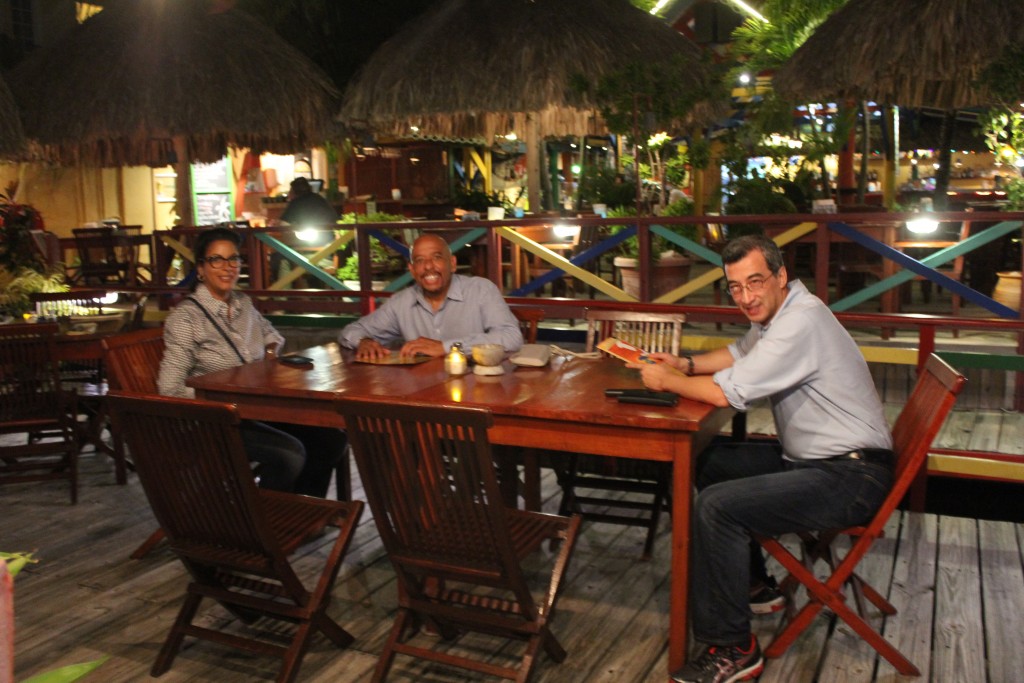 The Travelport Gang in Curacao

The first night, my flight got in around 830PM on American Airlines coming through Miami, and I waited in the Curacao immigration line for about an hour – it was a busy flight, I got off the plane almost last, AND there were only two immigration officials working the non-resident line. Luckily, there was no entry fee and no visa was required with a U.S. passport.

Outside, our local host Lionel was waiting for me to take me back to the hotel. First, he gave me a short 30 minute city tour, took me to the picturesque Dutch-looking waterfront of Willemstad and gave me the lay of the land by car. He also explained about the quasi-independence from the Dutch government, but that Curacao was still part of the Dutch kingdom and that people didn’t really want to separate from it because of the privileges of European education, healthcare, and of course the EU passport – which made travel and opportunity quite easy for Curacao citizens. Not to mention the fact that the economy in Curacao was mainly based on tourism, and oil refinery. In fact, as we went over the large car bridge connecting both sides of Willemstad by car (the Queen Juliana Bridge), we could see an ugly oil refinery factory looming in the distance, spouting pollution into an otherwise paradise-like scene. As I observed over the next few days, the local residents seemed fairly ambivalent to the presence of these monstrosities, and welcomed the additional income and wealth they brought in to the country.

I checked in to my hotel around 10PM and promptly showered and hit the sack. Curacao is on East Coast Time (EST) so going to bed at midnight actually felt about right.

The next day (Tuesday) I hung out on the beach after putting in some work in the morning on my presentation and having a nice breakfast. 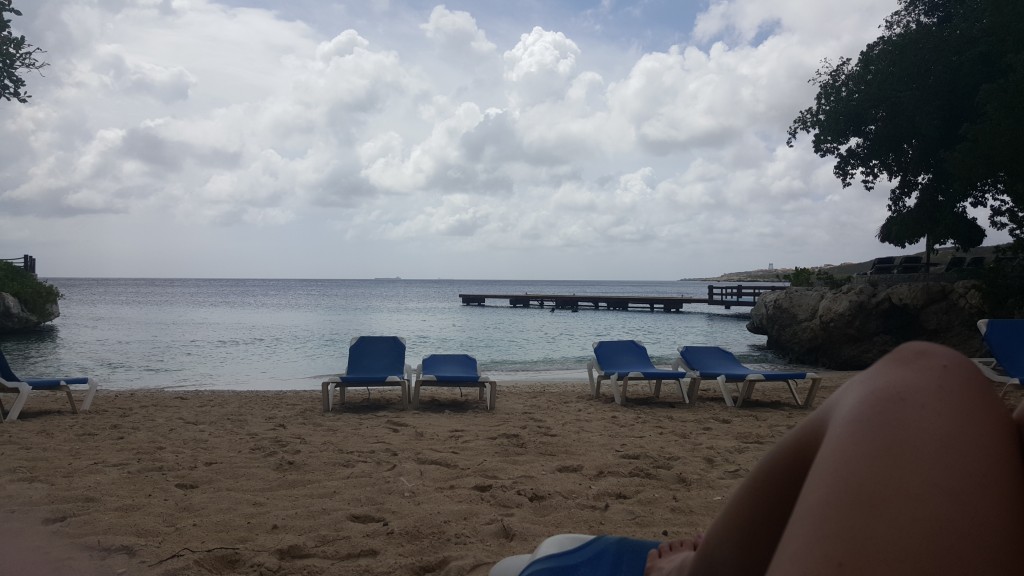 The hotel Wi-Fi was adequate and allowed me to continue working on the beach. I was tempted to take a dive in the water, but never actually did, as the clouds and rain rolled in in the late afternoon. 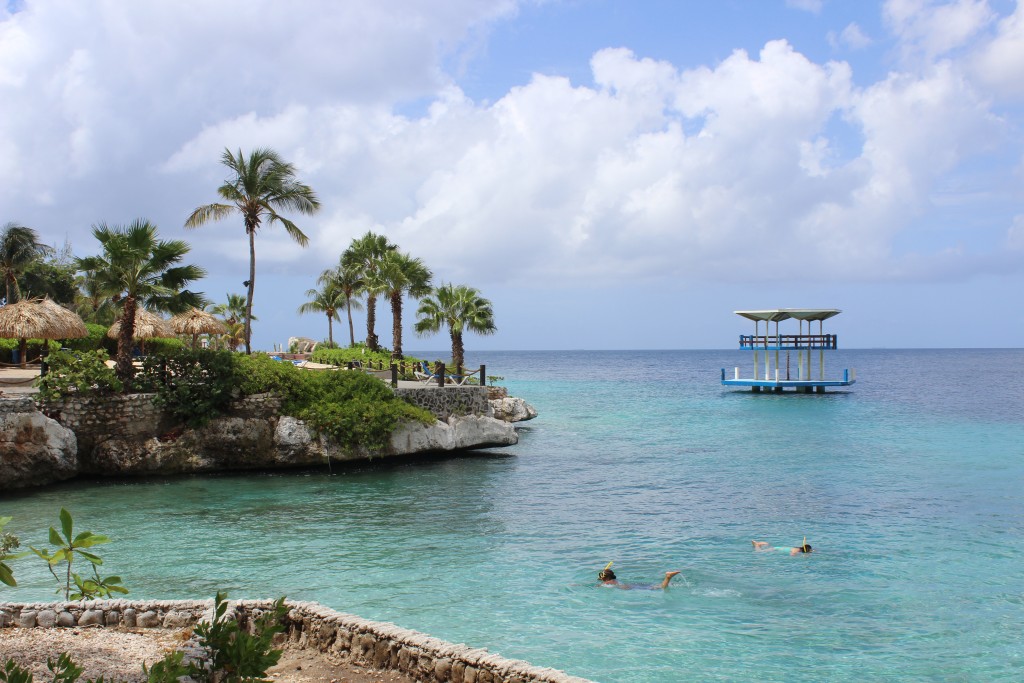 Later that night my colleagues got in and we met at the Hilton Curacao Executive lounge (5th floor) for some local(ish) beers. 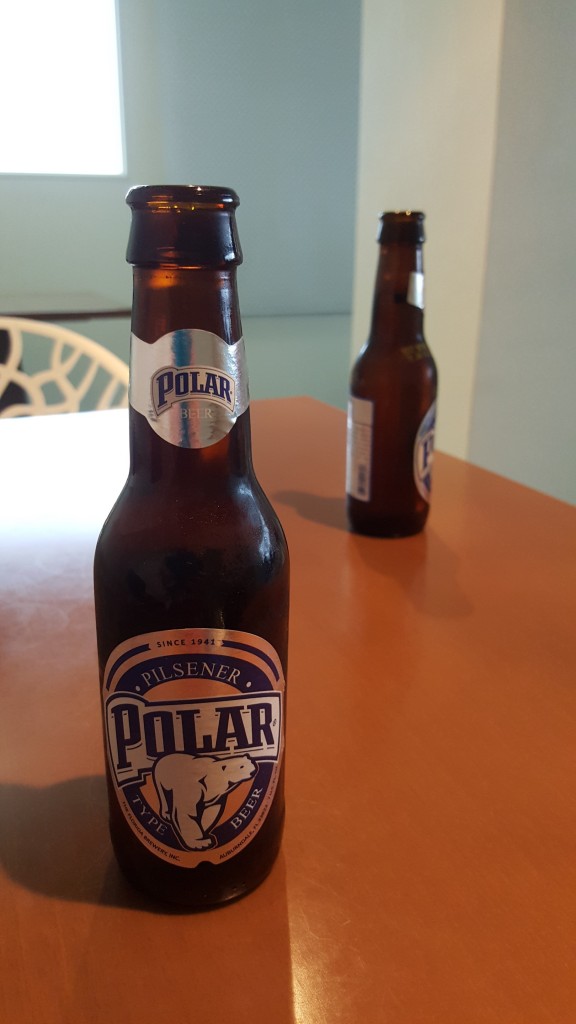 all went to the Otra Banda in Willemstad for another small walking tour of the old Fort and dinner at Xquisite, at the Renaissance Hotel on the waterfront. 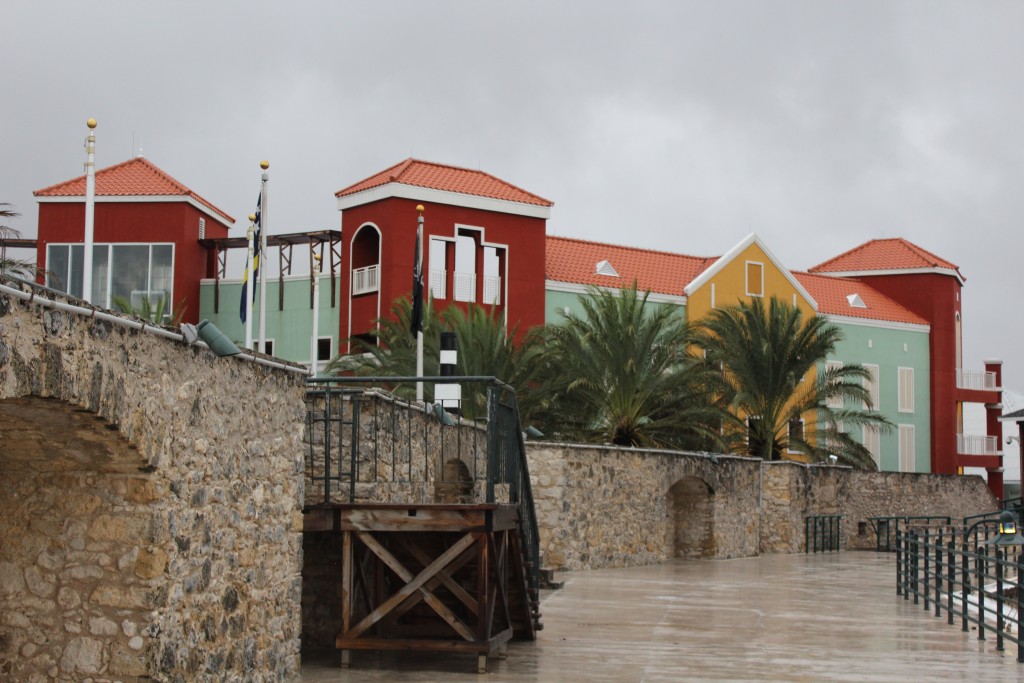 The Fort in Willemstad, Curacao

It was quite stormy, but I was able to cram this snap in before the downpour really picked up. 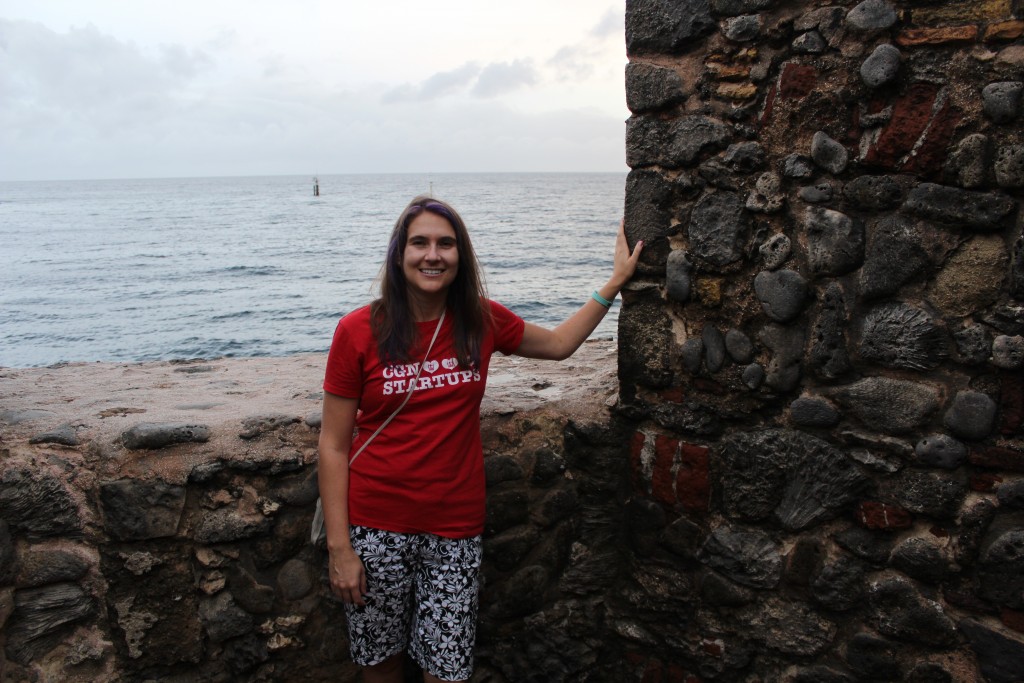 We stopped for a drink (I had a Blue Lagoon with Blue Curacao liquor of course – I had to get my “tourist” out of the way tonight!). The drink on the left was Julio’s Zombie. 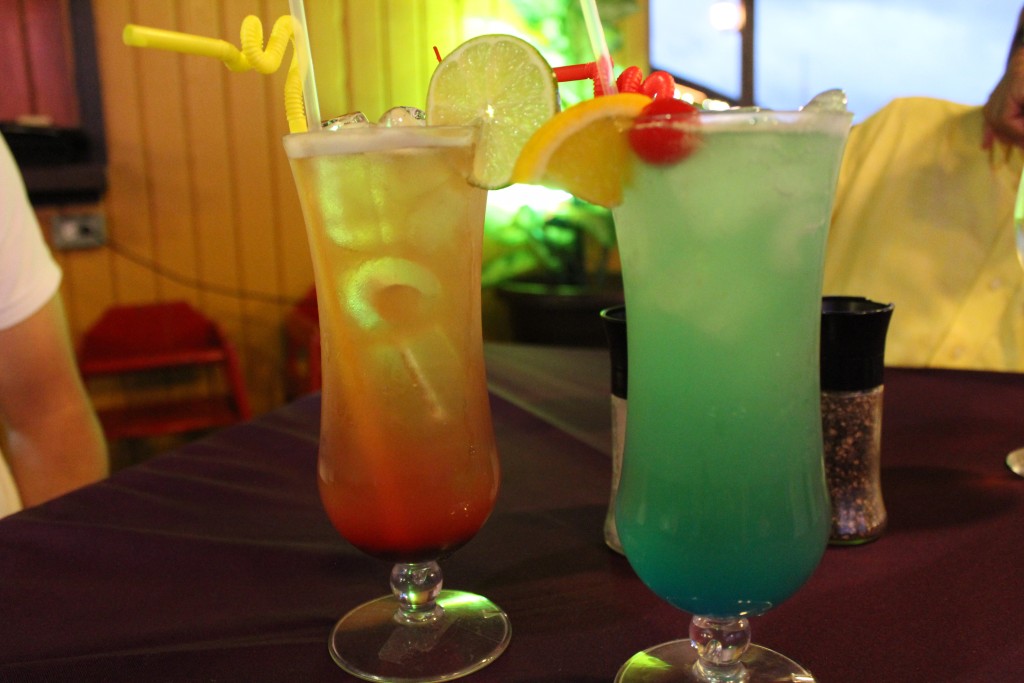 Then we headed over to the restaurant and had an excellent meal for a Tuesday night – I tried some Red Snapper (locally caught) and it was delish. Made it back to the room around 1030PM and again slept around midnight, in preparation for our first long workshop day. Luckily I went on in the afternoon so I had the morning to catch my breath and my coffee! 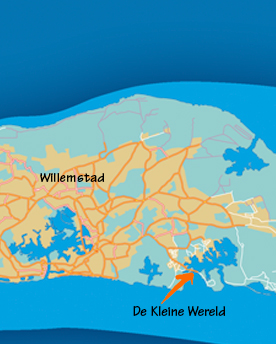 The next morning we met for breakfast around 745AM and had a full day of briefings with our client. We took a sit-down lunch at the hotel for a nice break, but powered through until about 530PM. The Travelport team regrouped around 630PM, piled in to Debra’s car, and drove out to Caracasbaai for dinner on the harbor at a place called De Kleine Wereld on Caracasbaaiweg 407 N.

It was a lovely restaurant, and again the food was excellent. I had a chicken stuffed with feta cheese, walnuts and honey with some vegetables as a side.

Thursday we only had a half day in our workshop, and by that point we were ready to spend an afternoon getting to know the city a bit more. We again piled in Debra’s car and road in to Willemstad, Curacao for some sightseeing. We started off at the Waterfront Arches looking for a place to have lunch. 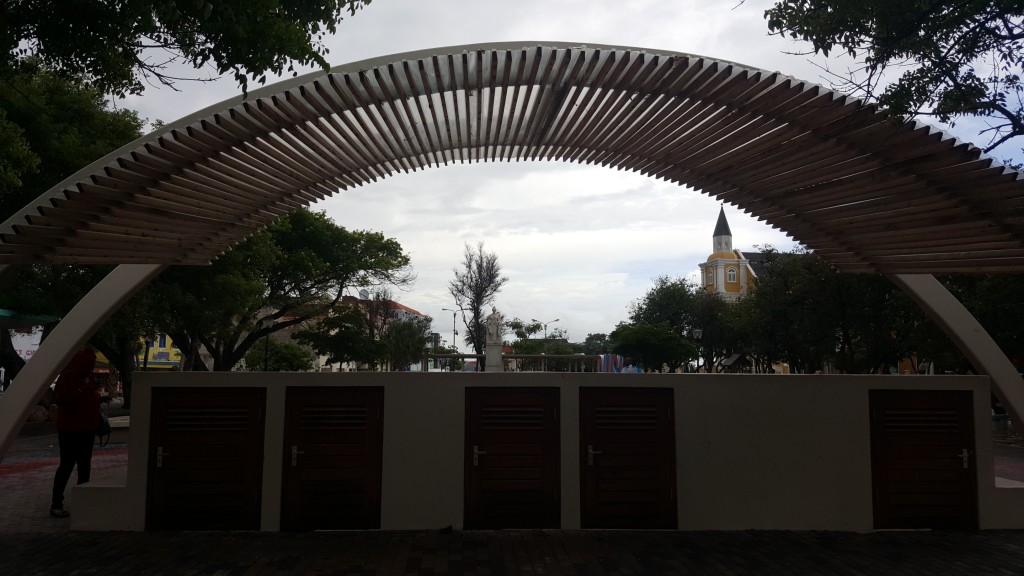 We saw the Curacao sign and just HAD to take photos. 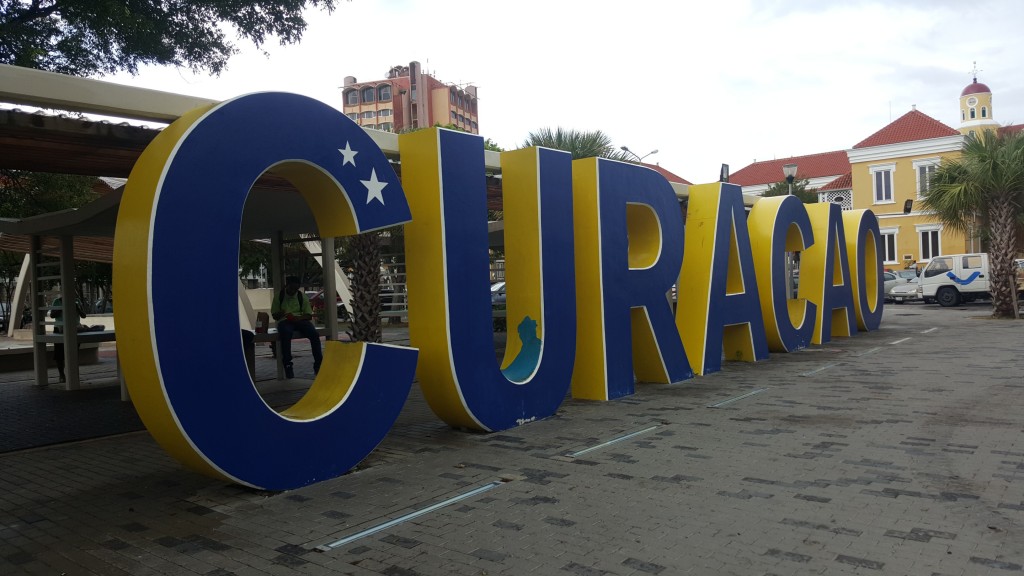 Finally we made it to the waterfront and found a spot at the Iguana Cafe. It had a great view of the other side of the channel and the picturesque Dutch colorful houses. Curacao is an interesting amalgamation of cultures and languages. The official language here is English, but people grow up speaking Dutch in the schools, Spanish, Papiamento, and English. Papiamento  is actually an amalgamation of all these languages, and is the most widely spoken language in the A-B-C islands (Aruba, Bonaire, Curacao). 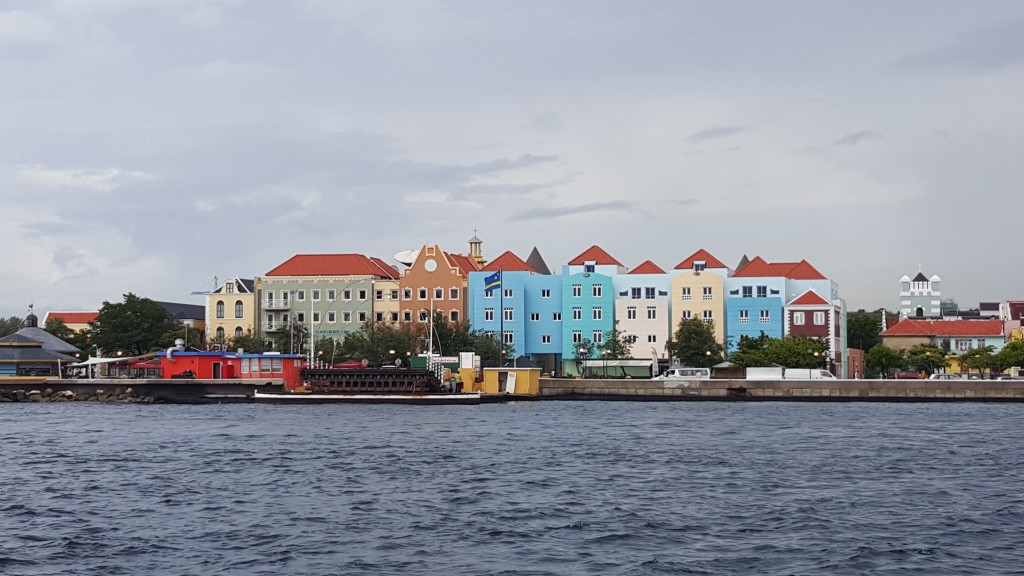 Lunch was just so-so, but the view and people watching made up for it. Of course this was a *very* touristic area so mostly there was “bumbling foreigner” syndrome happening all around us (and of course we weren’t this way at all! 😉 ). 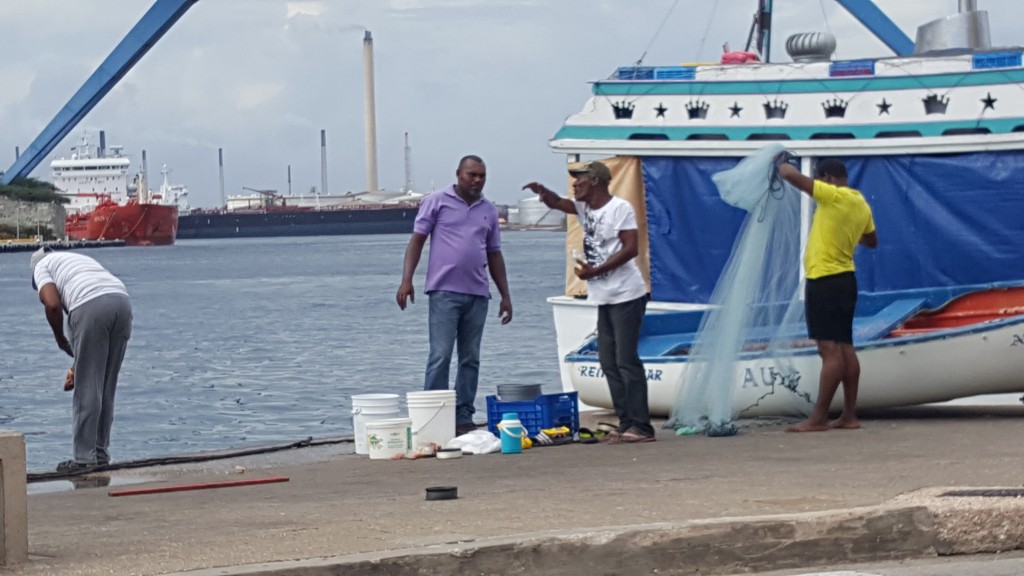 After walking around WiIllemstad, we had our fill of local color, fishing, and floating markets.

Debra took us on another car ride back to Caracasbeei and into the Jan Thiel Beach area, where all the wealthy Venezuelans had expansive villa beach houses. The only blight on this beautiful, drier (weather wise), wealthy suburb was a huge oil dredging barge that sat in the middle of an otherwise beautiful beach bay, completely blocking the view of several fancy mansions (I’m sure those people were mad!).

I was nearly falling asleep on the drive back to the hotel, so I took a nap from around 5-7PM upon reaching the Hilton. I had a *very* big lunch.

We met up again for drinks and dinner at the Marriott sport’s bar (Debra was staying at the Marriot, located next door to the HIlton Curacao Resort) to watch the Patriots/Steelers football game. I tried a mojito which was light on the rum unfortunately, and the carrot cake, which was pretty good.

Because of my nap, after the game I stayed up until about 1AM, and was up again on Friday around 7AM to finish off the final day of the workshop (the whole day was my show).

We again lunched at the hotel, and took a nice group picture to capture the workshop Travelport and Company team. 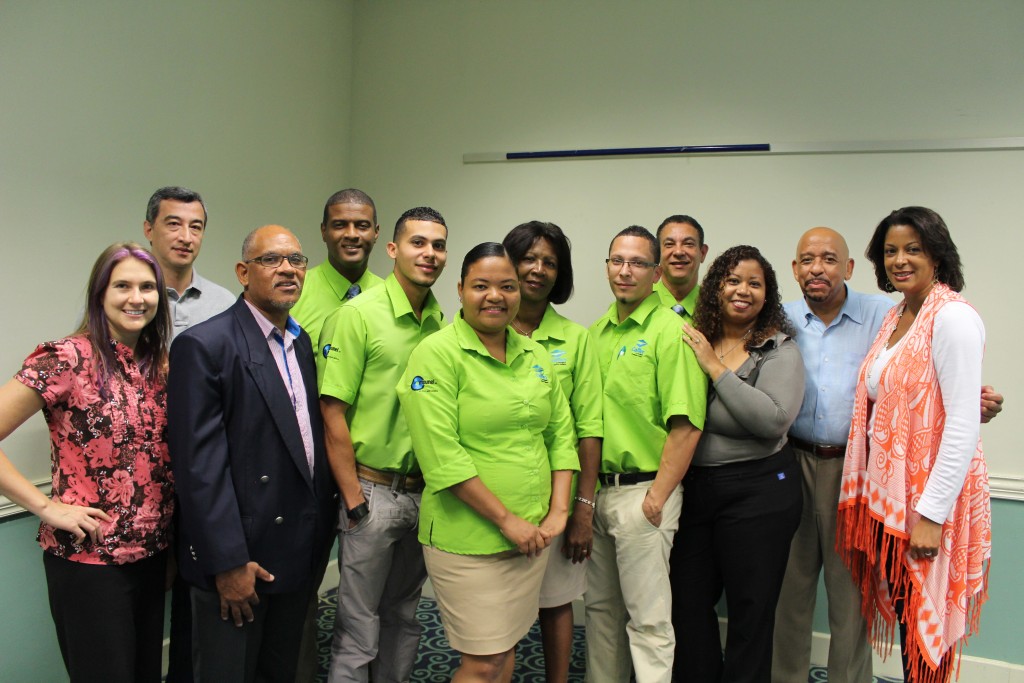 After finishing up around 5PM, and sayiing our goodbyes to Debra and Julio, Marvin and I met back up at 630PM at the Italian restaurant at Cielo at the hotel for a final dinner, since we would both be flying out the next day. Dinner was good – this was probably the best meal at the Hilton Curacao Resort. I had shrimp risotto and he had pasta primavera with marinara sauce, and we shared a nice bottle of Malbec.

The plan was actually to move from dinner to the jazz club, Miles Jazz Cafe, recommended by some of the locals we were in the workshop with – but we never quite made it there. We had organized a “semi legit” taxi through one of the hotel workers, waited for about 30 minutes until 930PM, and she (yes, SHE) never showed. We even walked to the road and back looking for the fabled white car (we had even met the driver for a minute after she parked, came to get us, and then was yelled at by the hotel contact to drive the car up so that we didn’t have to walk).

So by 10PM we both looked at each other and said fuck it, and walked back to the hotel with the attitude of “Hey we tried, the Universe just didn’t want this to happen for us.” In any case the customer invited us back in a year to give a refresher training, so maybe destiny would have a different jazz club in store for us at a different time.

Hey, we’re on an island mon. You got to go with the flow.

That’s a warp folks! My flight left Saturday afternoon at 130PM and there wasn’t much to report Saturday morning other than breakfast and packing. Till next time Curacao…and hello Cuba!

2 thoughts on “Getting to know Curacao”