My visa and passport came via FedEx overnight from Travisa the morning of October 7th, just in time to make my 310PM flight out of DEN so that I’d be flying to Rio ASAP. See more about that Visa process here. The only snafu was that my friend Tarek shipped a new mobile phone to my address that he wanted me to take with me to Brazil to deliver to him, and it was supposed to arrive in time, but unfortunately it did not. We checked Amazon later and apparently it arrived around 3PM, so I made a good decision to leave and not wait around for it (because obviously had I waited, I would have missed my flight).

Brendan kindly took me to the airport and I was there around 1PM, with plenty of time to check my bag and TSA Pre-Check my way lickety-split through Jeppeson security in 20 minutes flat (check out tripchi’s #layovertip guide of DEN if you’re new to this airport). I often go through the Concourse A security as it’s often a shorter #travelhack, but since I was flying United this time around and would have to take the train anyways, I did the Jeppeson main security direct to the train to wind up efficiently in Concourse C.

I had a good amount of time to kill when I hit my gate, and spent the time calling mom and Skyping with friends right up until boarding the plane and flying to Rio.

Here was my itinerary for Friday, October 7th:

I used 30,000 miles and $139.66 to the entire outbound leg, and I booked the flight about 5 days in advance. There was plenty of availability which made flying to Rio both cheap and stress-free.

The key to surviving this long economy-class trip while flying to Rio was that both legs were on the posh Dreamliner Boeing 787 aircraft. The flight to Houston/IAH was a breeze and I had a window seat where I could play with the cool tinted windows on the aircraft. 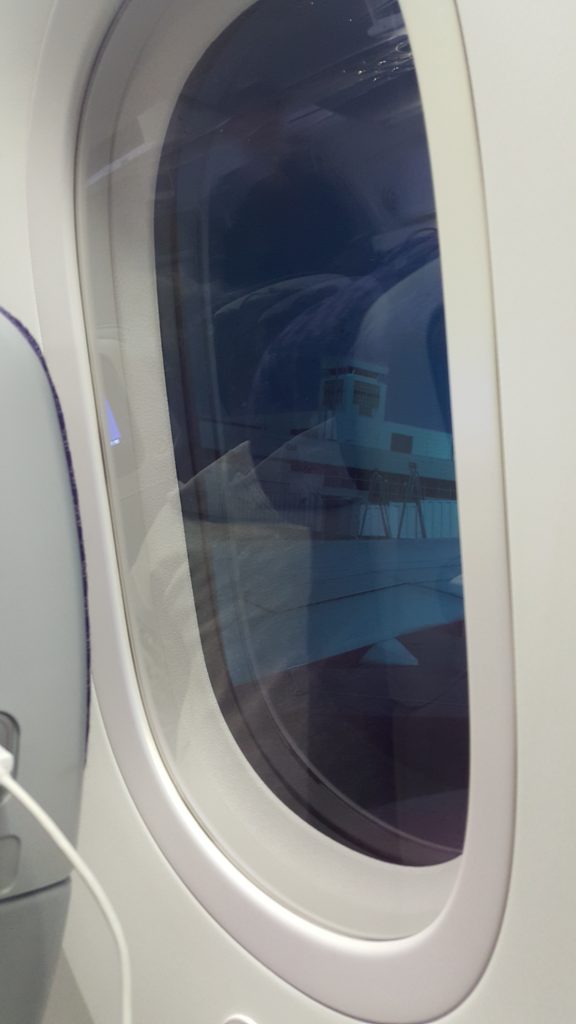 Tinted windows while flying to Rio

After a quick 90 minute flight to Houston, one movie on the amazing new United in-flight entertainment system (I chose the 13 hours – Secret Soldiers of Benghazi), and a bitchy flight attendant sitting next to me later (see rant below), we arrived in Houston early. 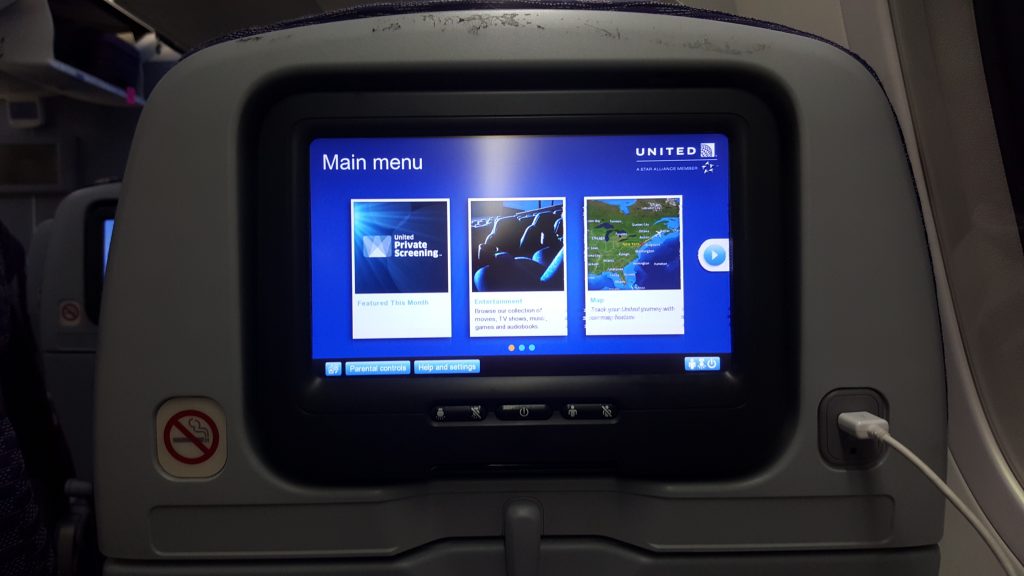 United in-flight entertainment on the Dreamliner

A few words about my seat mate.

Somewhat last minute she came barreling down the aisle and threw her designer purse in the middle seat between the friendly older lady on the aisle and me. The bag hit both of us as it fell, and the lady disappeared for 15 minutes until it was time to take off. Prior to the woman coming, we had assumed that the middle seat would be empty, so I had plugged my laptop in to the shared charger located between the middle and window seat (note: I’ve commented on this before, but I’ll do so again – the poor aircraft design to make 3 passengers share 2 chargers). I forgot I had it plugged in, and when the woman returned to her seat, she immediately yanked my charger out and pretty much threw it at me, saying that this wasn’t mine to use and that I was allowed to have the adapter on the end of the plug. She then declared she knew this because she was a flight attendant, and that in any case I should use the charger on the right side of my seat (there was none). Then she reached her hand between my legs to try to locate the non-existent charger, couldn’t find it, and then just muttered a few choice phrases my way, diving in to an excessively loud FaceTime with her boyfriend. I put my charger away and buried myself in my movie. Towards the end of the flight she got up to use the bathroom, and see it was a good chance for me to also get up, I tried to follow her. But, as she saw me get up, she decided to leave her tray table up to block my path. I put the armrest between us down and slid out, as the nice lady on the aisle offered to hold my drink as I went to the restroom. We exchanged a knowing glance and a few words between her and her friend about the rudeness of this woman as I got up. When I returned, the nice lady on the end again mentioned how bitchy the woman was being, and how it seemed she had it out for me, although I had done nothing. She mentioned the “lecture” at the beginning of the flight about the charger. We had a nice karmic laugh about it and it all again rolled off.

When the place landed and the seat-belt sign went off, the flight attendant to my left immediately stood up and bolted off, elbowing her way to the front. I was still finishing up my movie (one of the benefits of the new United service was that the in-flight entertainment didn’t automatically turn off when the plane landed). I had a long layover at IAH and in any case was in no hurry to deplane. As I eventually got around to leaving, I noticed that the rude woman next to me had left behind an expensive looking jacket on her seat. Karma’s a bitch! Even so, I still felt honor bound to do my best to get it back to her. Not finding her on the plane, I gave the jacket to another flight attendant ad told her that the woman who left it was also a flight attendant and to please try to get her the jacket. She said she would.

Feeling pretty good about my actions despite a temptation to do wrong and get revenge (which I overcame), I deplaned and ran in in to the woman on the aisle in the airport bathroom. She again expressed her shock at our seat-mate’s behavior and I told her about the jacket and how I thought this was her karmic penalty for her negativity and horribleness. We shared a sweet moment in that.

In Houston, I killed some time Skyping and then heading to the Red Carpet Club where I had some appetizers. I had brought with me two Club passes that would expire at the end of 2016, and it was high-time to use them. I have to say – it had been years since I had visited a United Red Carpet Club (I used to have annual memberships back in the 2005-2008 period when I was traveling with Unite frequently), and I was pleasantly surprised with the improvement of the food options. I tried a feta and red pepper tomato bisque, a few pieces of Parmesan cheese, some carrots (which actually were delicious dipped in the soup), and a chocolate chip cookie. A perfect snack!

The flight from IAH to GIG (Rio de Janeiro) was on time and I ambled on as usual last minute at the final call to finally finish flying to Rio. No need to hurry on-board since it would be another 10 hours since I would be able to stretch my legs. The aircraft was another comfy Dreamliner and I again had a window seat, 35K. There was a Brazilian man on the aisle but an empty middle seat between us, so we were able to spill over and stretch into the seat and shared floor space between us. Much appreciated on this red-eye flight flying to Rio! 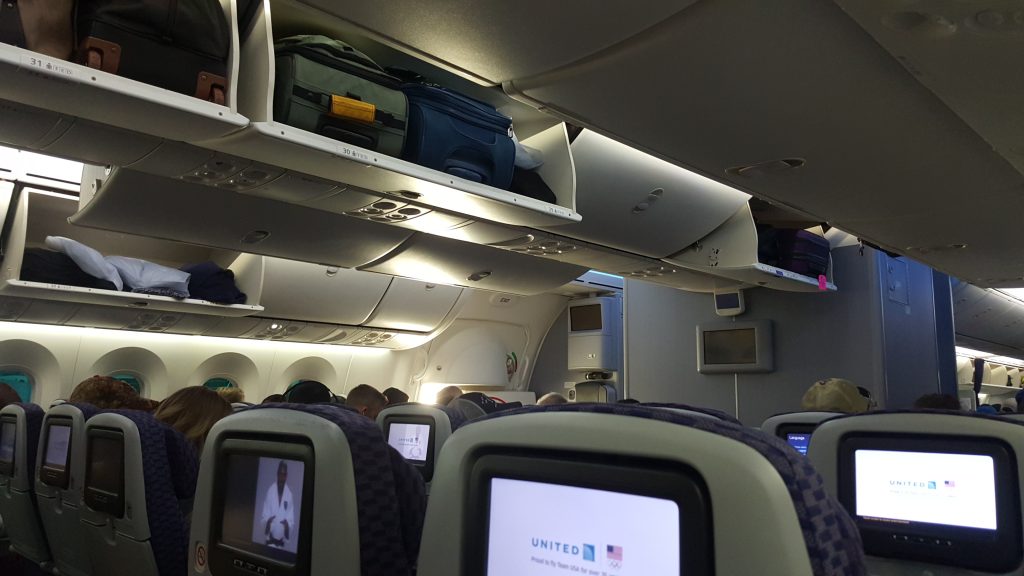 Take off was on-time and I especially enjoyed the United Rio Olympics safety visit centered around Team USA. 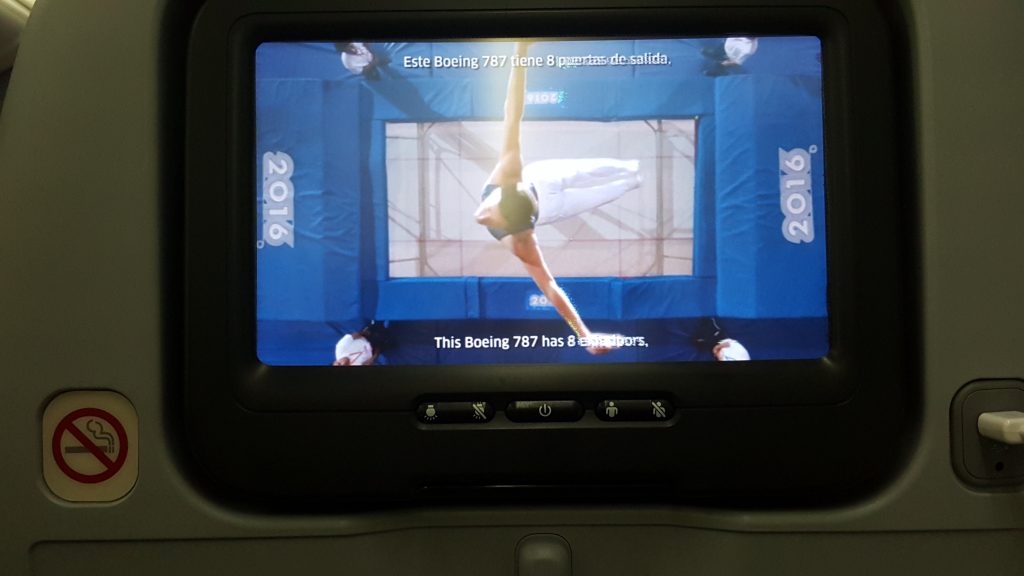 I had requested the East Asian special meal and it came prior to the regular food service. Note – another benefit of ordering the special meal is that you get served first! Of course, they failed to provide silverware, so I actually ended up waited until the regular service came around 😉 The food selection normally was a pasta dish or a chicken, but I was actually quite happy with my East Asian dish which was a veg plate of chickpea/lentil curry, a side of yogurt, and gluten free chocolate chip cookies. A wonderful (and mildly healthy #travelhack).

Two movies (10 Cloverfield and Finding Dory) and 6 hours of restless sleep later, I awoke to a breakfast of a croissant and yogurt and found myself landing in Rio shortly after. We deplaned, wound our way through the GIG airport (a nice 15 minute walk from our gate to immigration), and made it through immigration thankfully in 10 minutes. My checked back was already waiting for me on the other side. I stopped at an ATM to get some Reais (3.1:1 exchange rate), checked email and WhatsApp to message my host in Santa Teresa on the free GIG Wi-Fi, negotiated for a Taxi after abandoning the fixed-rate kiosk option inside the airport, and soon found my way out of the airport and in to the heart of adventure. What a rush!