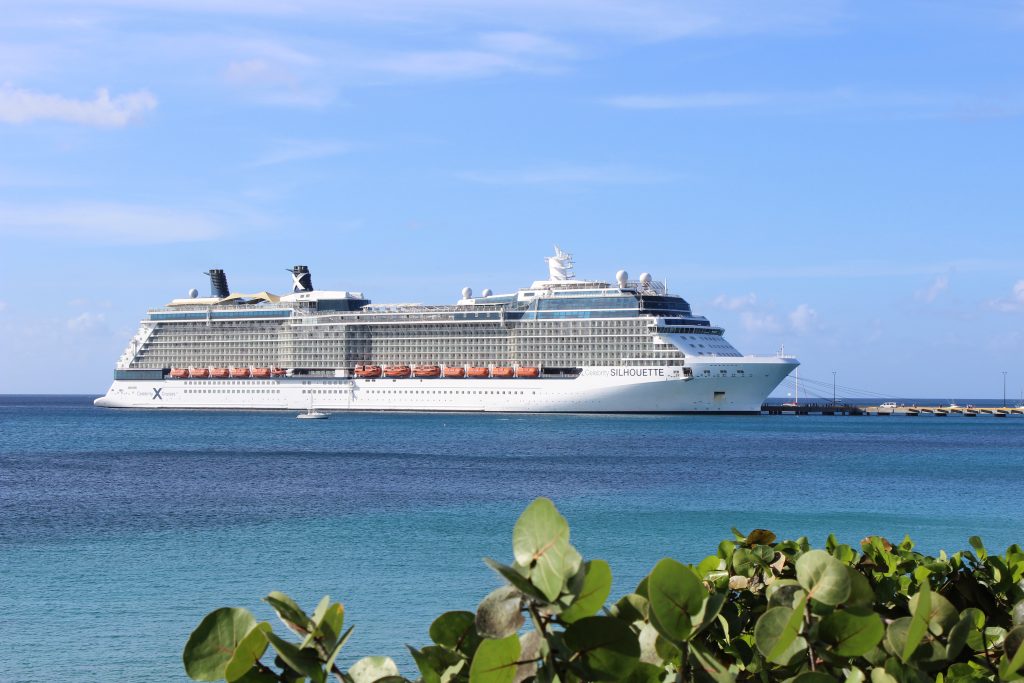 Our first meal on the cruise ship was around noon where we took in the lunch buffet and were impressed with the “build your own” options – salad, pasta, stir fry – as well as the copious variety of different types of cuisines. Despite that I went with a soup and salad for lunch. There was certainly  something for everybody.

The Celebrity Silhouette also emphasized sanitation, which we appreciated. Many a squirt of hand sanitizer was aggressively placed on our hands by eager crew members prior to walking in to any eating area. Also, there was an established etiquette for refilling water bottles at the water/juice stations – rather than put your bottle up to the dispenser, you’d use a clean glass to get water and then fill your water bottle with the water in the glass. And sometimes glasses weren’t readily available at all the water/juice stations, such as at the Aqua Spa Bar. We were surprised however that there was no easy, automatic bottle fill options like there were at gyms and airports across the world. A miss by the Celebrity Silhouette. Water should be the easiest thing to get. Of course, what they really want is for you to buy a beverage package (sparkling + regular water package is about $12/day per person), so maybe making bottle filling slightly difficult is one of the more subtle upsell tactics.

After lunch we strolled around some more, and eventually settled in to our stateroom, 1148, located on the 10th deck once it opened up around 1PM. We unpacked our bags and used every square inch of drawer and closet space (it was perfect). This is not something either of us usually do (we’re used to living out of suitcases when we travel), but because this trip was longer than normal, we decided to settle in.

Our attendant, St. Elmore from St. Vincent’s and the Grenadines, introduced himself to us – he was very friendly and helpful, and had a great sense of humor which we discovered the more we talked to him. Our room was great. Not only was it quiet and dark (being an interior room), it was also one of less expensive ones on the ship. We prioritize darkness and sleep over balconies, windows, and light – so it worked out great for us! We paid around $1,200 per person for the 13 day, 12 night itinerary cruising the Celebrity Silhouette around the Eastern Caribbean.

Here’s a picture of our room, and it’s very spacious. 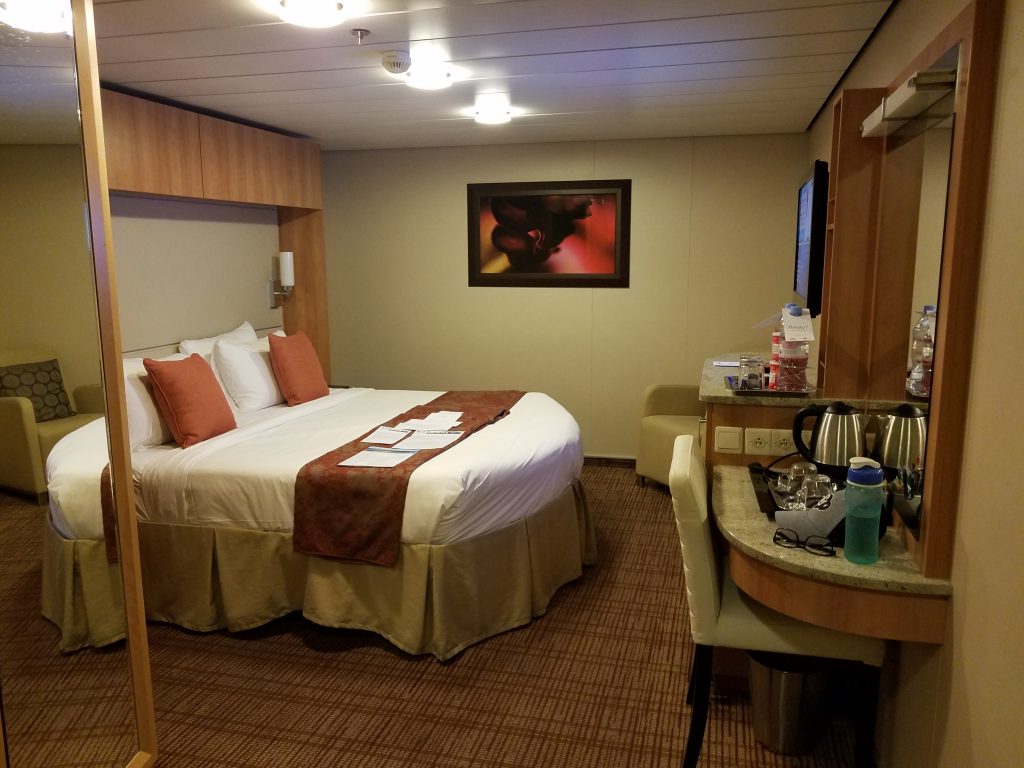 We were even able to grab an upgrade to get a better placement on the ship (aft but near middle, and higher) due to my Celebrity Captain’s Club status (this was my third cruise with Celebrity).

After having our luggage delivered (no problem), and settling in and napping for a bit, we had to participate in the mandatory emergency drill. In this drill, each guest has to report to his or her muster station to await further instructions from the staff. Our muster station was located on deck 5, in Michael’s Club. When the siren sounded, we headed down there, and found ourselves crammed in to a too small room for hundreds of people. We were then forced to watch a series of ridiculous movies on tiny screens that nobody could see or hear about the ship rules, and this was followed by a live life-vest demonstration. We vaguely remember something about singing children advising us not to smoke in our rooms, and a femme Nikita spy letting us know….something, that we can’t even remember (which case in point demonstrates the pointlessness of the videos). We would have preferred for a human to just announce simple instructions and do’s/don’ts on the ship in 5 minutes or less instead of dumbing it down over the span of 15 minutes. Throughout this, we were cracking jokes the 80 year old women next to us who also recognized the absurdity. The coolest part was watching the Celebrity Silhouette sign language translator on the ship try to translate everything for his two passengers – he worked it and he was awesome (he shows up again on some of our tours with his guests)!

For dinner the first night, we paid $25 per person for one of the specialty restaurants that was positively reviewed called The Lawn Club Grill. We arrived prior to our reservation because we were hungry and tired, having only gotten 3 hours of sleep the previous night. We sat down right near the window by the lawn, it was too windy for me (and there was no way to draw down a shade), so we moved to a table closer to the kitchen. The food was prepared from an open kitchen, and in theory guests could cook their steaks or make their flatbread pizzas themselves (however I didn’t see anyone taking advantage of that). We placed our drink orders and it took about 20 minutes for them to show up, with far too many clarifying explanations about what we wanted along the way. Apparently the drink that was listed on the menu was a drink too far for Brendan, and the large sparkling water I ordered was similarly just mind-blowing since I didn’t have a beverage package and since only I was drinking it.

The salad bar and the vegetarian flatbread we ordered were tasty despite a snafu in the delivery process. I watched in amusement as they were making the pizza, pulling it out of the oven, forgetting about it, noticing it again 10 minutes later and realizing it was cold, and then putting it back in the oven for 10 minutes before delivering it to us 30 minutes after we ordered. It was like watching the disappointing future you predicted unfolding in front of you, as you feel powerless to do anything about it.

We ordered filet mignons. I ordered medium rare and got medium well. Brendan ordered medium and got somewhere between medium rare and medium. His was delicious; mine was tough. I had to explain the situation to the waiter and ask for a new one. It took over 20 minutes. Brendan was done with his steak by the time I started. But, the medium-rare filet mignon was delicious, and worth the wait.

For dessert, Brendan got the warm cookie sundae and I got the blueberry pie – both served piping hot in ramekins. Served with vanilla ice cream, they were very good, but very hot.

It was obvious the wait staff were still ironing out the kinks on the first night, but the food was good. As an apology, the head waiter comped our drinks, which was an extremely nice and unexpected gesture. We continue to be astounded by the kindness, attention to customer service, and patience the staff members show the guests. They really work their tails off to make everything perfect for us.

So that was our first day, more or less. The next day would be an “at sea” day which meant no obligations or expectations at all – a long, long sleep was long overdue.