Our road trip adventure to Trinidad, Cuba began by getting horribly lost trying to get out of Havana. Despite the directions we got from Kenia, and the map, we kept making wrong turns trying to find the A-1 (La Autopista Nacional), and stopped to ask directions at nearly every turn. Finally, we got on the highway, and started the 200 km drive until we had to pull off onto smaller side roads to weave our way South to Cienfuegos and then to Trinidad, Cuba.

We stopped at a roadside café for a quick meal – rice and beans, pork asada, vegetables, and potatoes. I turned up my nose at first, but it turned out to be delicious and cheap ($4). 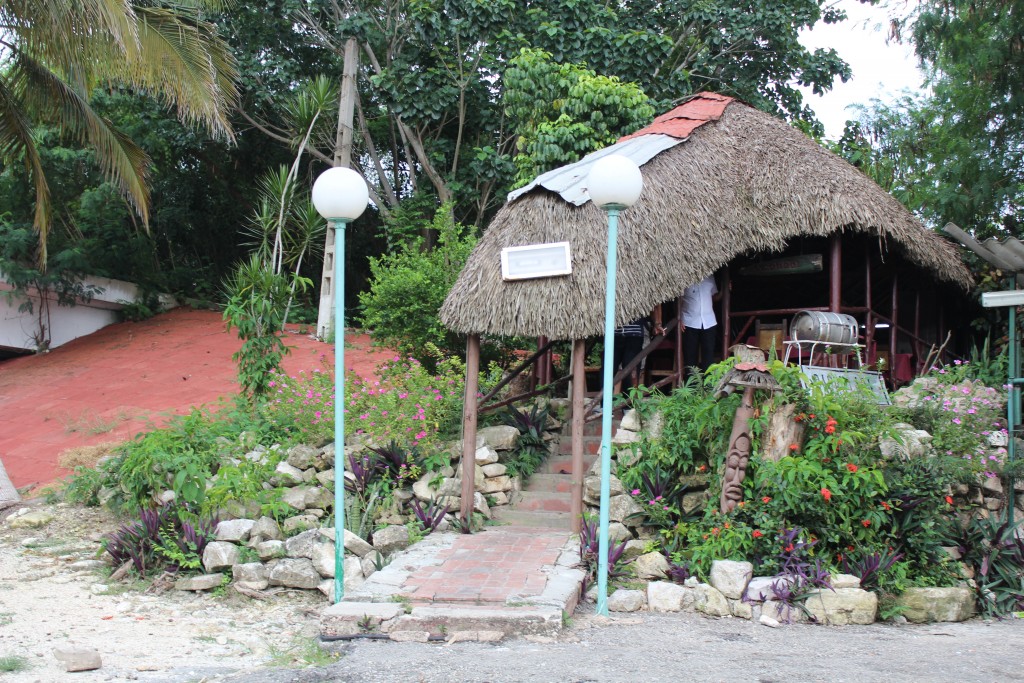 Roadside restaurant on Autopista Nacional A1

After the stop, we pretty much drove non-stop. Driving conditions were hard because a storm rolled through, dumping rain on us and threatening with lightning on the horizon. When we pulled of the main highway in Aguada de Pasajeres the going got even harder. The lanes became one way each way small country roads with little to no lights or visibility because of the rain. Dave did a great job driving. We found the signage was good for about 100 km to Cienfuegos, but then fell off and we started getting lost. We stopped to top off our tank and use the restroom in Cienfuegos – what we could see of the town was that it was a college town with lots of pizza parlors. It did not look particularly interesting, but then again we were only on the outskirts.

After Cienfuegos the adventure of finding the way to Trinidad, Cuba began. There were occasional signs but too many forks in the road that weren’t marked to make us question our choices. We stopped at nearly every fork to ask directions, and somehow managed to get horribly turned around, and ended up on the coast near a light house when we were supposed to stay inland. After 3 stops for directions we finally learned we needed to double back about 20 km, and take a hard right inland near a gas station. We were approached but a police officer at one of our direction finding stops to drop 2 children off in Trinidad on our way. We declined, but Dave was more in to that idea than me.

After another hour of driving we finally reached Trinidad, Cuba (5 hours in total, not including stops). The final stretch of road was marked by the carapaces of dead crabs that we had inadvertently run over (they all seemed to come out at dusk to try to cross the road…I feel there’s a joke in there somewhere?). We knew our hotel was in La Boca, which we would hit prior to Trinidad. We asked another police officer for directions, and he told us to past the cemetery, make a right, and if we hit *something* we’ve gone too far. My Spanish is still only SO useful….but still functional and better than nothing. We past the cemetery and thankfully saw a sign for La Boca, where we took a right. We headed down a road that was almost an alleyway for 5km until we finally hit the beach. The road wove left, and we saw a sign for our Hostal, which was alight a beacon of light in the dark – it was an a Spanish style villa that seemed very new – Hostal Cuba – and was right on the water at the mount of La Boca (which also meant “the mouth”), just outside Trinidad, Cuba. 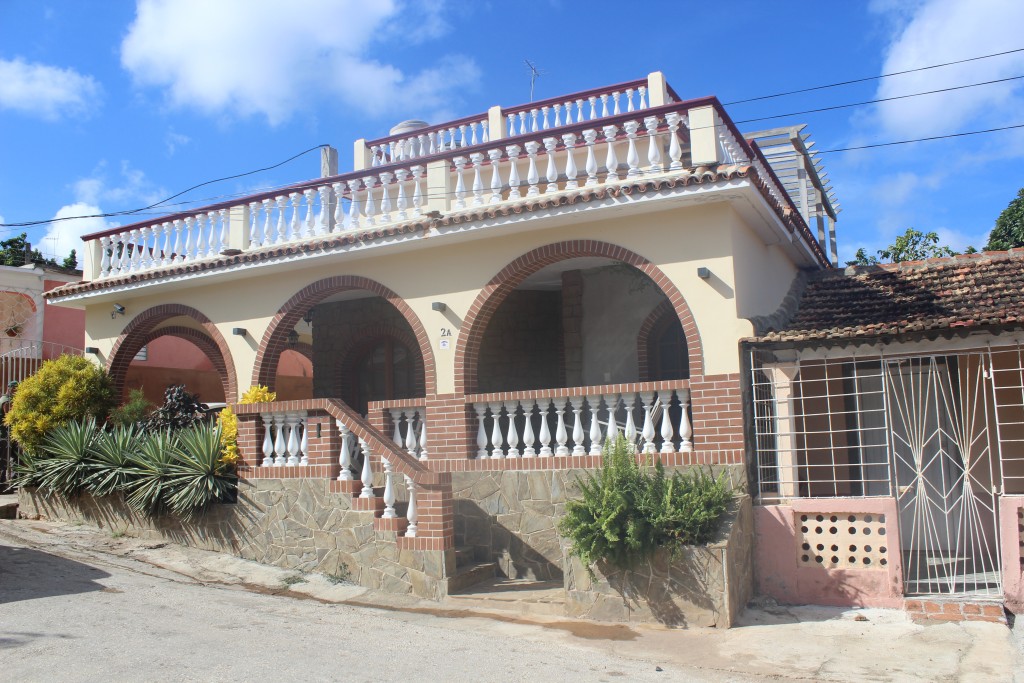 Hostal Cuba outside of Trinidad, Cuba in La Boca

The family owning it was very nice and gave us a gracious welcome. There was even a parking spot for us inside the gated area of the house. The villa looked brand new, with wood, marble, and stone accents. 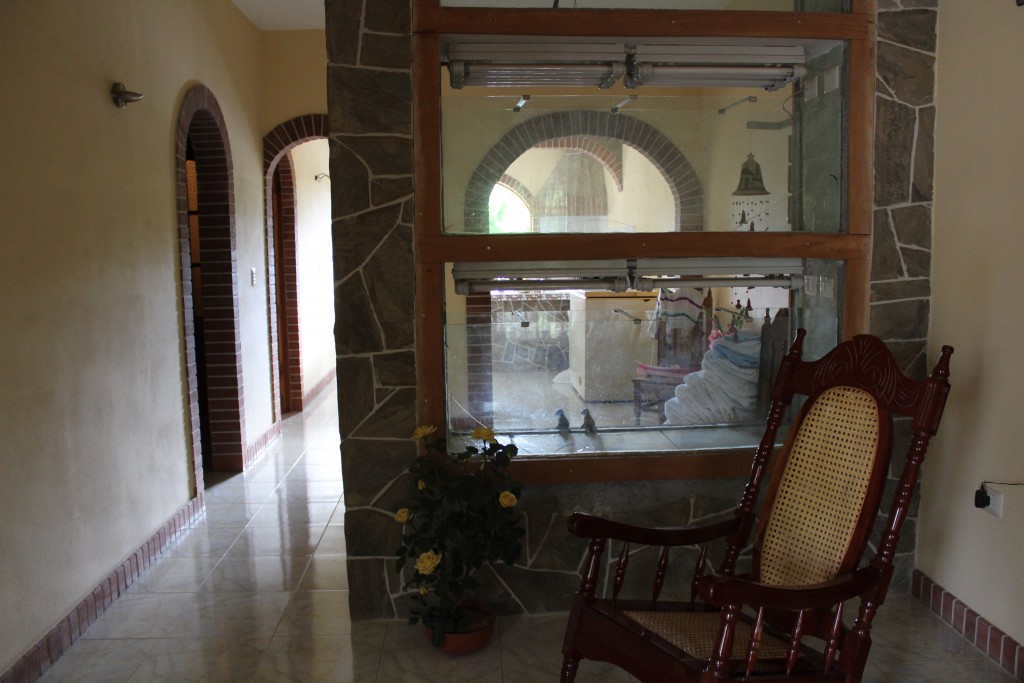 The room was shiny marble and wood, all new, large, with an A/C and private bathroom with hot and cold water. We were thrilled. 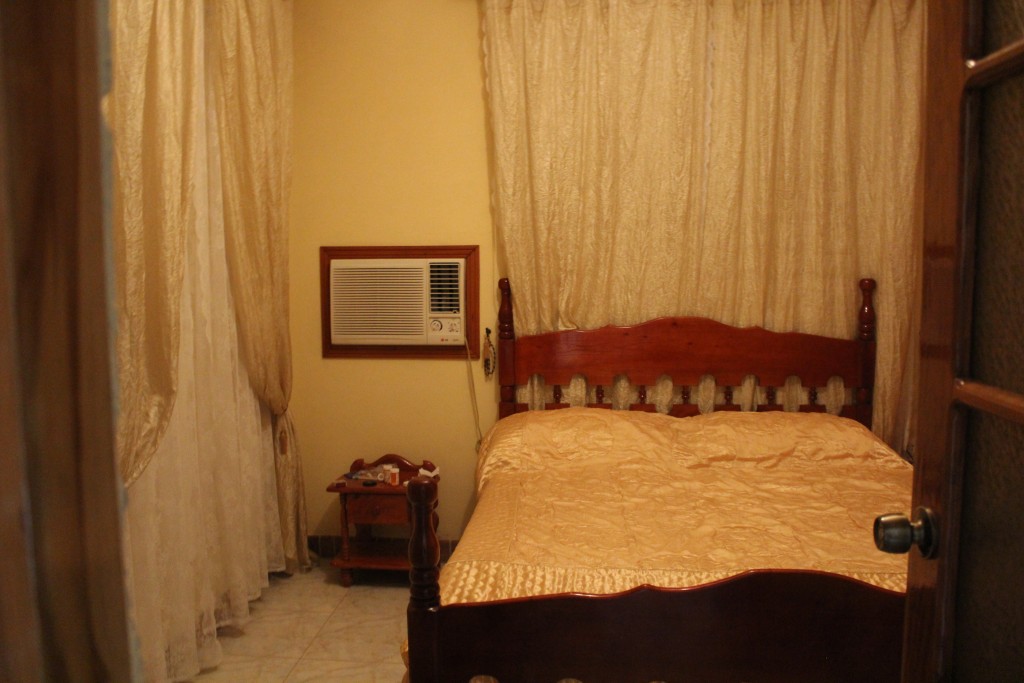 Unfortunately, they couldn’t accommodate us for dinner because we arrived quite late (1030PM) and the son, Ronaldo, who was the cook was out. They said we would have trouble finding food at this hour, but to try walking around to see. Luckily, around the corner we found a place that had to other foreigners eating outside, and after a little back and forth the owner, Jose Peralta, agreed to prepare a simple dinner of whatever he had lying around. He served us out of his home-restaurant, El Galeòn. 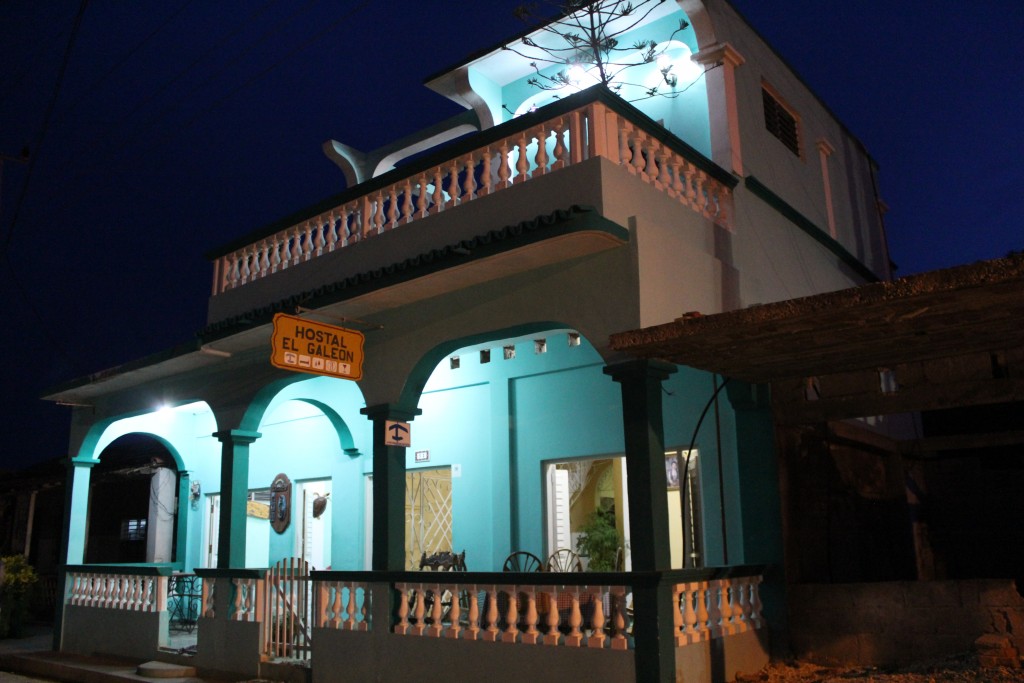 The “simple” dinner turned out to be an all-out feast of fresh, local cuisine that he had prepared for his family. He also handcrafted us 2 mojitos, bringing in mint from his garden outside. They were the best mojitos we had ever had. He spent over 5 minutes muddling the ingredients together, so it was made by care and hecho de mano en Cuba. 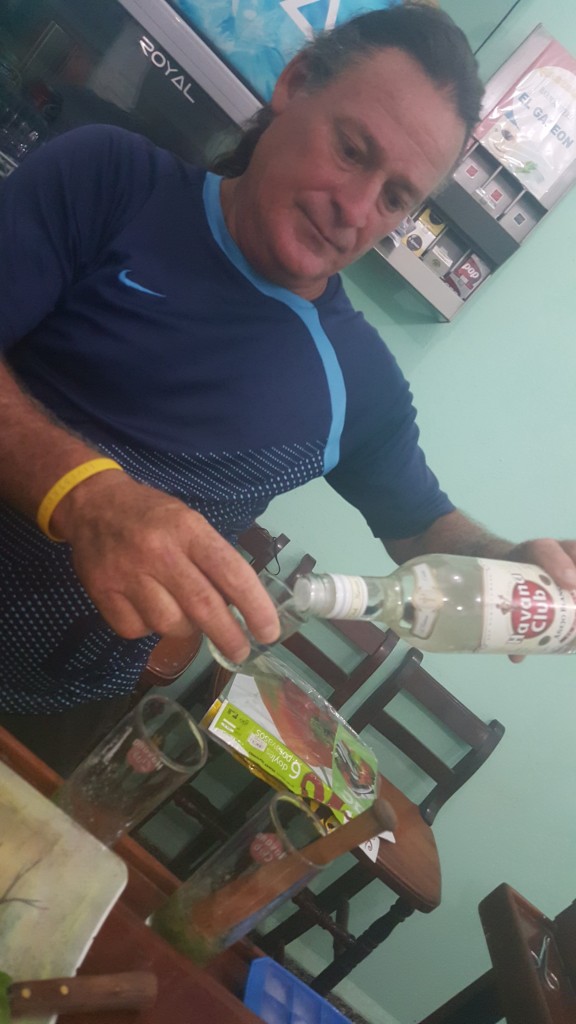 The food was fresh, healthy, and delicious. Copious quantities of shrimp and rice that we soaked in to a bean soup. A large plate of fresh lettuce and cabbage, garnished with vegetables including tomatoes and green beans. There was oil and vinegar on the table to prepare a dressing to our tastes. 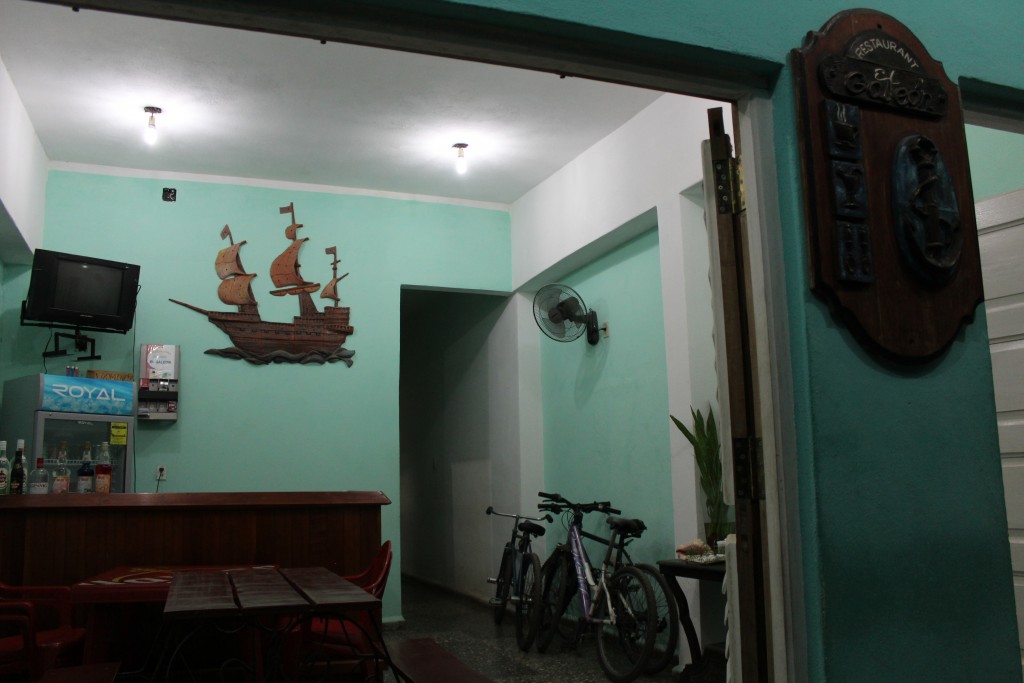 Through the meal, we chatted with the other couple – they were Italians who were at the end of a 2 week stay. They warned us that Trinidad wasn’t their favorite, and that it was overly touristic, and it was best to stick to the beaches. They were friendly, but had that air of hipster snobbery, constantly in search of an “authentic” experience perhaps at the expense of actually noticing authentic experiences.

Towards the end of the dinner, after the Italians had gone to bed, Jose joined us in conversation for about an hour. His English was excellent, and he told us stories of life in Cuba and the government’s meddling. In particular, he explained the story behind coming to own his house hear in La Boca. His neighbor had to marry someone, wait 2.5 years (the legal amount of time until divorce was possible), and then get a divorce. The divorce allowed them to split the property in half. The neighbor kept one half of the house, and then married Jose’s sister. They again waited the requisite 2.5 years, and got a divorce – transferring the house into her name. That was years ago, he explained, as now you are actually able to legally sell and buy property on the open market, and don’t have to jump through hoops of marriage and divorce.

There was a house being constructed across the street by a wealthy Cuban who lived in America, and halfway through the construction he decided he didn’t want to continue – so now it’s for sale for 70,000 CUC. Quite cheap still (even though it was only half built). This will all change if the government ever allows foreign ownership to begin. 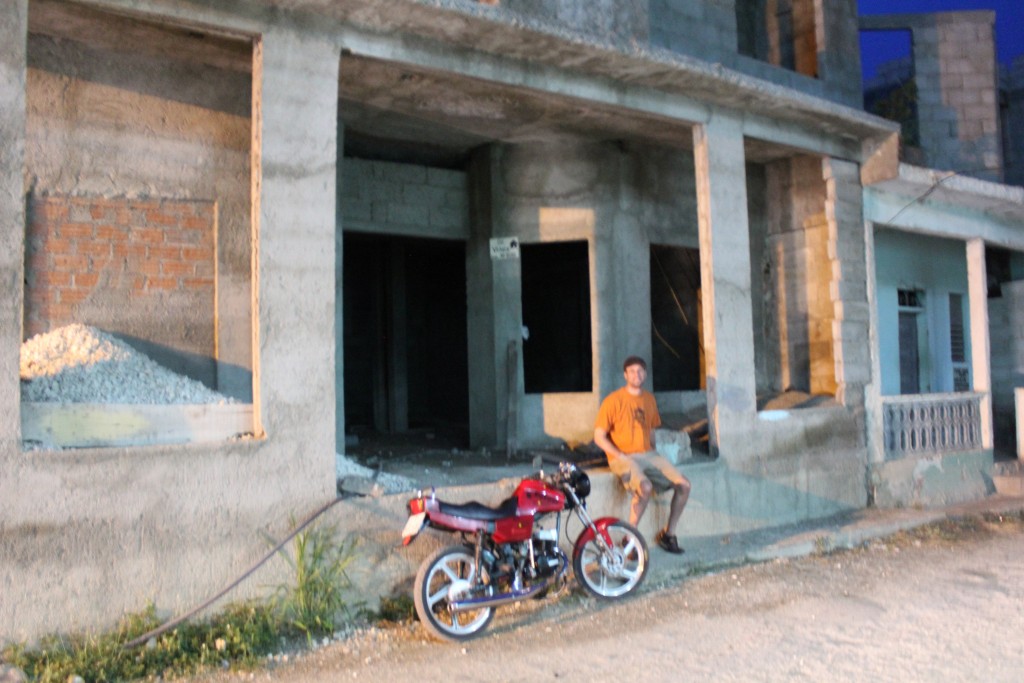 Around 1130PM we finally finished up, and turned in for the night. We had only been in the country 24 hours, but felt like it had been weeks. Tomorrow, we would head in to Trinidad, Cuba and explore the old city.