I’m sad to say this is the last day of the Schaffer family 3-country trek through Central Africa. We had a great time and, more importantly, nobody fought, nobody got sick, and everybody survived. In fact, we may even do it again soon (Spain!?).

We had a great breakfast at the Emin Pasha Hotel and agreed that it was one of the best we’ve stayed at so far on the trip. Robert met us around 0900 to whisk us away on our last city tour and museum visit – the Ugandan National museum. It had everything ranging from archeology, to geology, to history, to traditional culture – but many of the exhibits were old and not particularly inviting. However, the museum docent was enthusiastic and gave us a great 45 minutes whirlwind narrative of “what not to miss.” As the reader may already have guessed, I’m not a huge museum person – I prefer living history. So I was more than happy to rush through the museum in such a short time.

Then we went to the craft market in the Kampala city center, where there were about 30 stalls packed together into an artisinal fair, and I was able to negotiate shop to shop, playing one off the other (clearly taking after my grandfather, Marv). I ended up purchasing the beaded sandals I’d been eyeing all trip, a drinking gourd decorated with a hippo painting, and green purse, then I was kicking myself for not picking up in Bujumbura, where I first saw it (although I really wanted the purple one).

The last day was a little melancholy to say the least, but had a good ending because Leslie got to reunite with her colleague when she was working in Uganda as a consultant for an NGO years ago. We all got to meet Hannington, and gathered for lunch at the Crocodile Cafe.

I was also able to do some shopping next door at a boutique (Banana Boat) where I purchased a gorgeous traditional basket and eyed some table runners and beaded place mates but ultimately was able to resist the temptation.

Then Robert drove us to the airport, in Entebbe, a town about 45 minutes away on Lake Victoria. The airport ordeal was a little unfriendly, so be sure to leave plenty of extra time. Not only to they do a thorough cavity search of you and the vehicle upon entry into the airport, they make you “walk the gauntlet” across the airport “border” where the vehicle picks you up on the other side. Then, you MUST park in the parking lot (similar to Addis) – rather than curbside drop-off, and wheel your luggage on handcarts (free at least) up a huge hill to the top. It did take some physical effort.

We said goodbye to Robert and checked in to our flight, after filling out our departure card and scanning the luggage. As we left the check-in area, Leslie was stopped and forced to weigh her carry-on – apparently there was a 7 kg carry-on weight limit. It ended up having to be checked. Needless to say as soon as I saw them hassling her, I quickly made a beeline in the other direction, hoping nobody would notice my (equally) overstuffed carry-on. They didn’t.

We processed through immigration where they had a full facial and fingerprint biometric scanning system, although they gave Marv a pass due to his age.

Everything was on time (we had a 1730 flight to Addis), and as usual, enjoyed a decent meal on the Ethiopian Airlines flight. When we arrived in Addis I said my goodbyes and went on to leave the airport and begin my Ethiopian adventure, as Leslie and Marv went the opposite direction to catch their connecting flight to Washington, D.C.

I processed through the visa area very quickly this time – no line at all. I remember last year, when I landed in the morning, it took nearly 30 minutes to make it through. I paid the $20 fee for US citizens and found my cousin, Mesele, right away, waiting for me at the exit.

As we got in to his car to depart for his house, where we would celebrate Christmas Eve (the Ethiopian Christmas is Jan 7), I recalled the same, familiar CD as my last visit was playing in his car. There’s something to be said for consistency.

Since I met him last, he moved into a nicer house closer to the city, with a separate guest room. As we walked through the threshold the first thing I noticed was fresh grass strewn across the floor – traditional for Christmas, and extremely charming. His house was immaculate with tasteful furnishings. As we chatted and waited for Mercy (Mesele’s wife) to return home, several of Mesele’s friends arrived for a small celebration. When Mercy showed up, we started a delicious dinner of Doro Wat with Shiro and Injera (chicken in gravy with a boiled egg, atop a porous spongy bread), followed by a traditional coffee ceremony. I really enjoyed chatting with their friends, and as always, Mesele and Mercy were the epitome of hospitality. 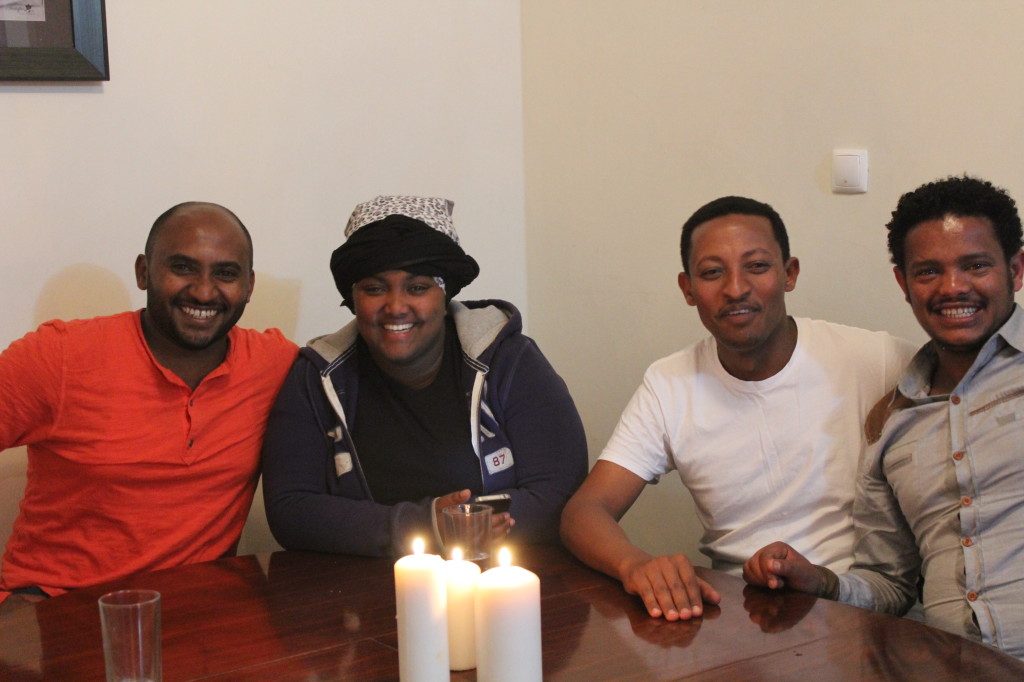 One thought on “Day 9 – Kampala, Uganda to Addis Ababa, Ethiopia”