Today was a big day. We got up at 0600 for a quick breakfast and then a drive to the Gorilla meeting place to receive a briefing and get paired off with other travelers for the trek. Robert explained to us that typically there is a slow, medium, and fast group – we urged him to be our agent, and find others to form a slow to medium group.

After waiting for over an hour, around 0800, groups were formed. We ended up with two other people – a German photographer and an American cruise singer – that ended up being much faster than us. We could have guessed just by looking at them – but for whatever reason our guide, Oliver, thought the arrangement would work.

The briefing was just that – brief. Oliver explained that our group of 4 would be tracking a medium sized gorilla family called the Titans. It included 1 silverback, 2 females, 3 adolescent males (blackbacks), 2 juveniles, and 2 babies. Our companions seemed disappointed with not having a larger group to track – they apparently just came back from tracking the day before in Uganda, and they said it was very difficult and they didn’t get to see much. We didn’t know what to expect.

For the tourists, there are 8 gorilla groups that are made available at the Volcanoes National Park for viewing – an hour a day for each gorilla tribe. There are 13 additional tribes that are researched, but not tracked by the public. That means each day, 8 gorilla families give up 1 hour of their day to be tracked/watched by tourists, with an average of 8 people per tracking group per family (64 people per day) – a small price to pay for the protection and conversation of the park and their species. The hefty tracking price ($500/person) and limited availability ensure that the gorillas aren’t exploited and that the conversation effort can continue.

We departed the briefing area around 0830 and arrived at the basecamp road mountain entrance where we would walk the rest of the way up the mountain at about 0850. By the time we found two porters (there were a cluster of about 20 waiting for us), to not only help carry our gear (cameras, jackets, and water), but also to push, pull, and prod us when we needed encouragement up and down the mountain, it was 0900 – we started the long climb. It was beautiful trellised farmland until about half-way up the mountain. This took us about 1 hour 15 minutes to navigate, and finally we reached the entrance to the national park, which was walled off from the private farmland. The national park was dense jungle – and we marveled to think that the famers below assiduously cleared the jungle to make way for the rich, volcanic farmland that we now see.

By the time we reached the entrance, our 4 trackers/spotters had already located the gorilla family, which was a great boon because this meant less climbing around aimlessly for us, especially since we were already quite tired from the initial climb. Not only that, but the gorillas were only about 15 minutes away from us – quite close, considering there was still a lot of mountain to go. We were extremely fortunate and others were not so lucky – some had to climb for much longer, and some gorilla tribes were on the move and not static.

Ours were sitting in their nest, eating. All in all we saw 8 gorillas – 1 female with a baby, 1 silverback, 3 blackbacks, and 2 juveniles. The female was nursing the baby, with the silverback standing watching and a juvenile nearby. Around the corner were another 2 blackbacks lounging, and another one eating. 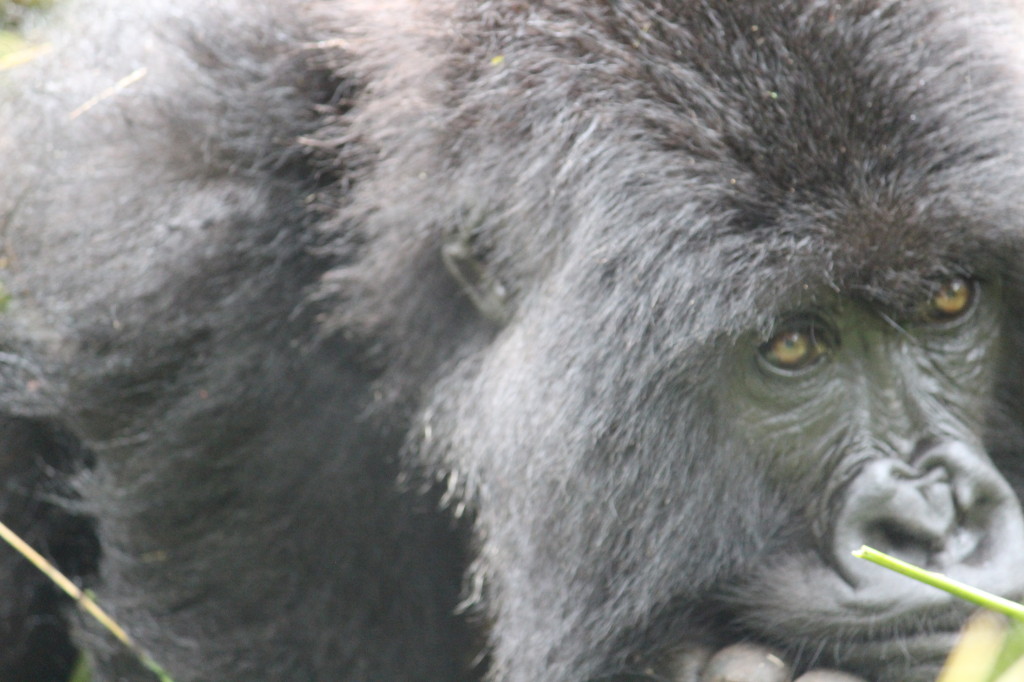 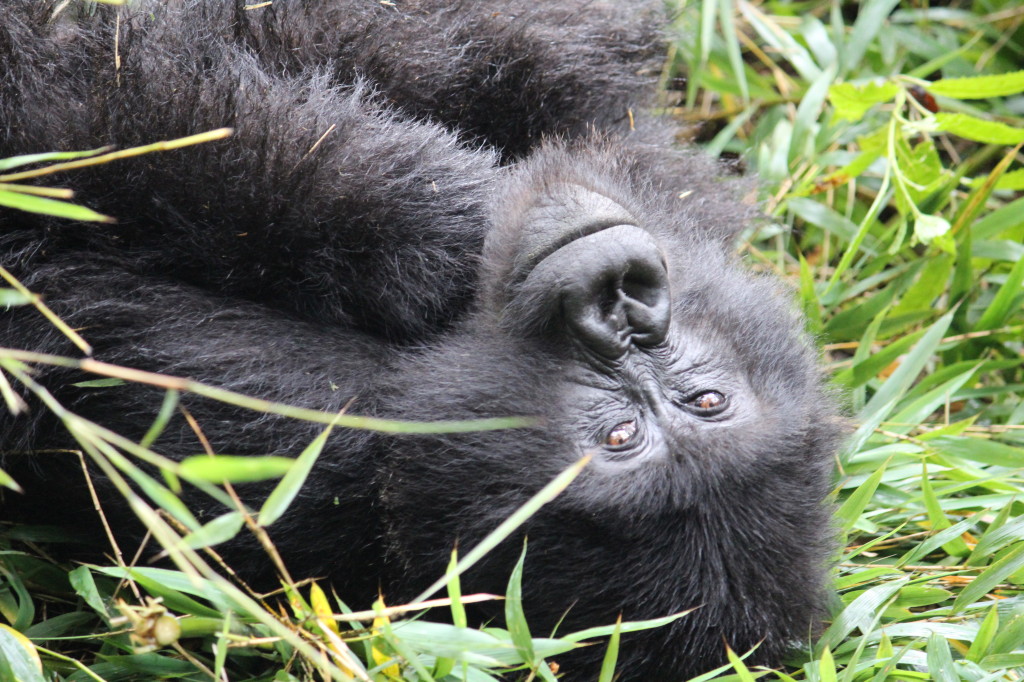 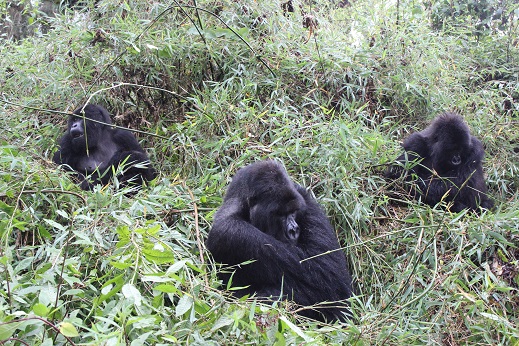 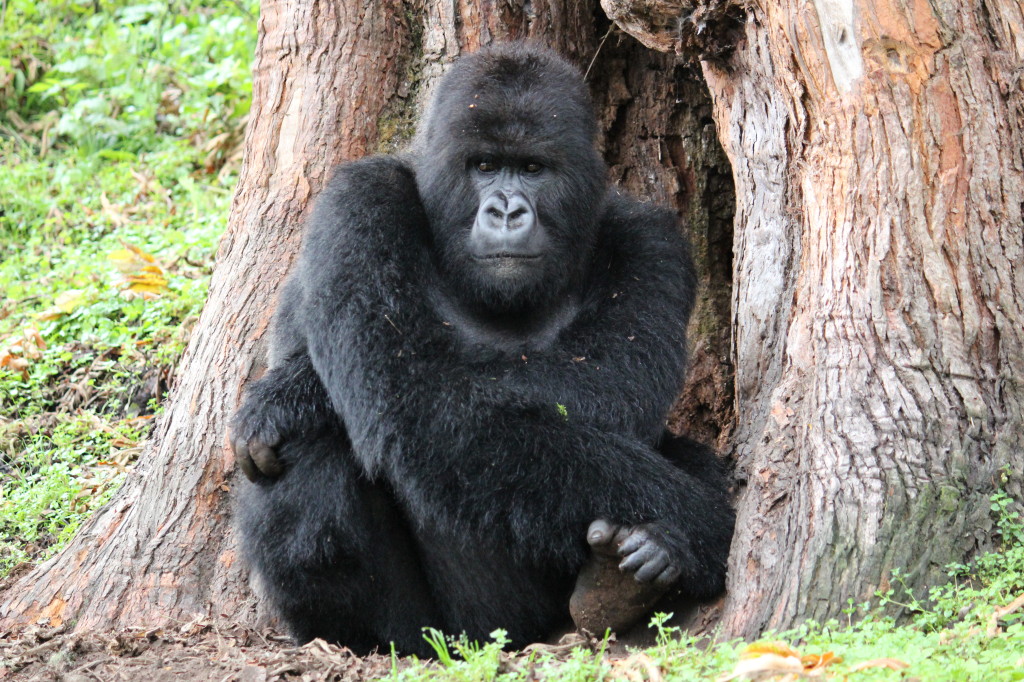 We got to spend an hour watching and photographing them. One walked right past me within feet to find a better place to snack. There was a little chest beating and grumbling, but mostly they slept and ate, generally immobile. We also learned how to make the right noises to encourage them to look up at us. I captured over 300 photos in total.

We then proceeded down the mountain, which took us only about 45 minutes (with some photo stops along the way) to make it to the bottom. 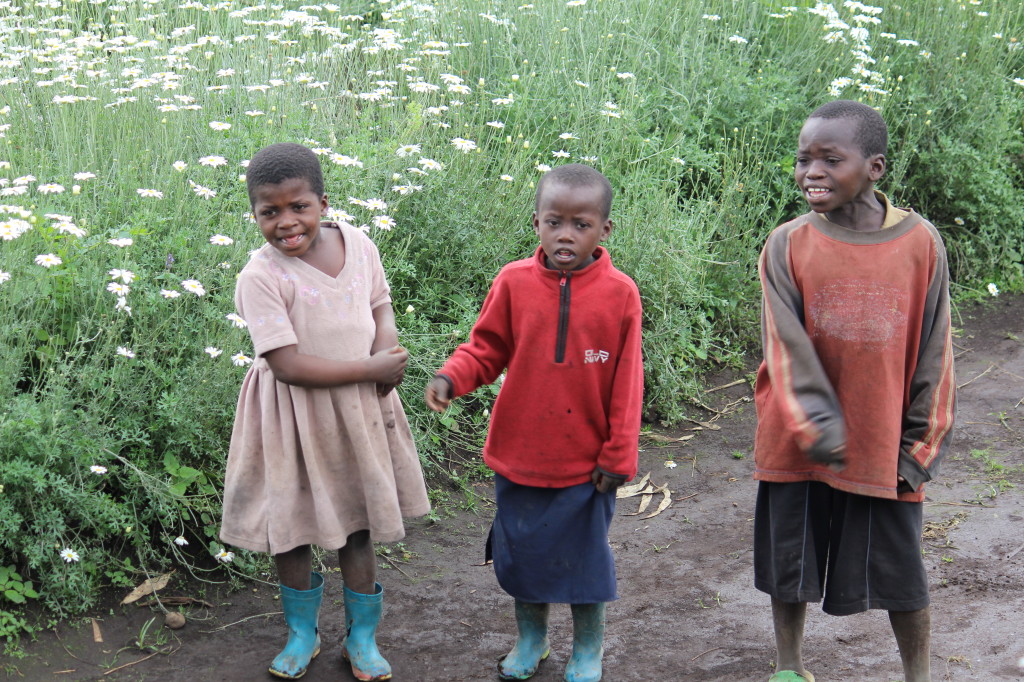 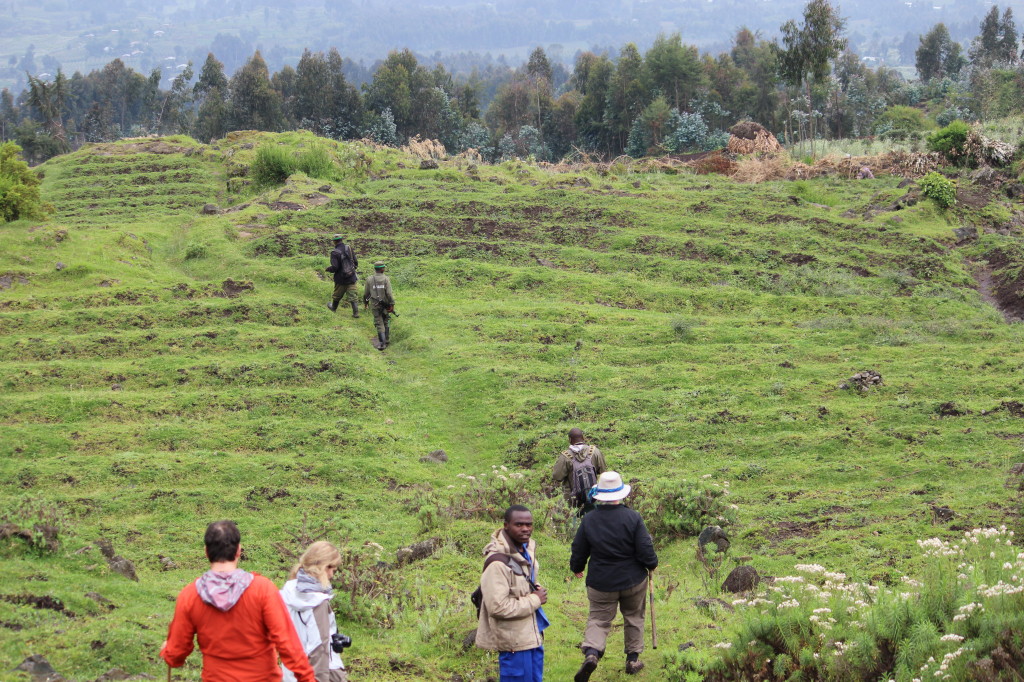 I got some great shots of our porters and our protection detail (for the buffalo).

We reached the bottom feeling triumphant and fulfilled – here is my glory shot with our two porters, Paul and Emmanuel. This was around 1200. 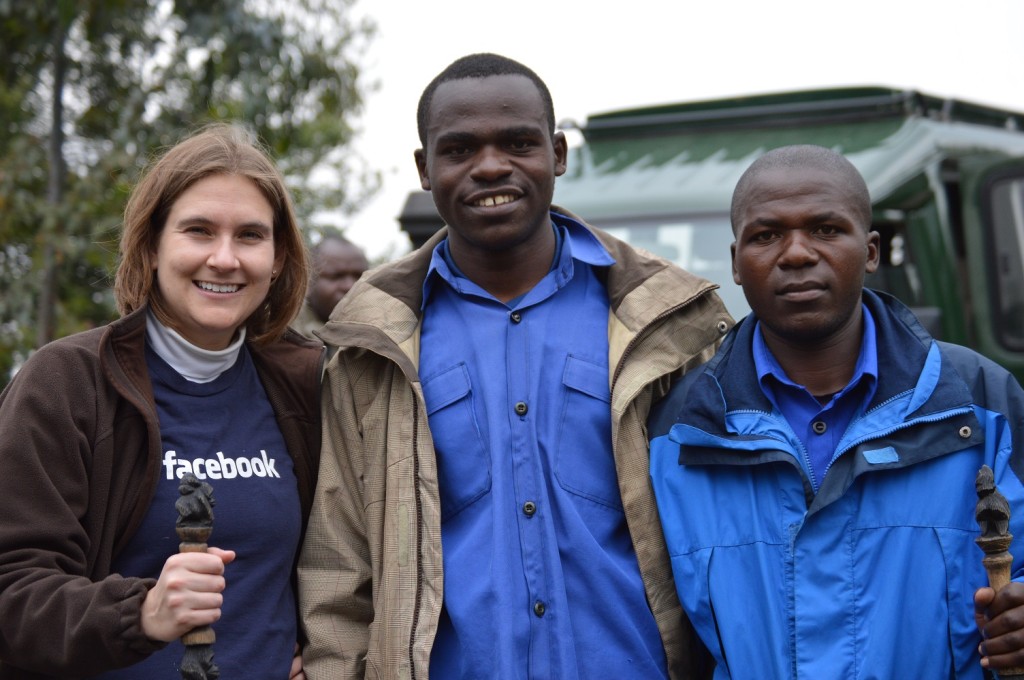 When we got back to the lodge, around 1330, we had a huge lunch and got a bottle of South African wine to celebrate. Here’s my certificate to prove I did it: 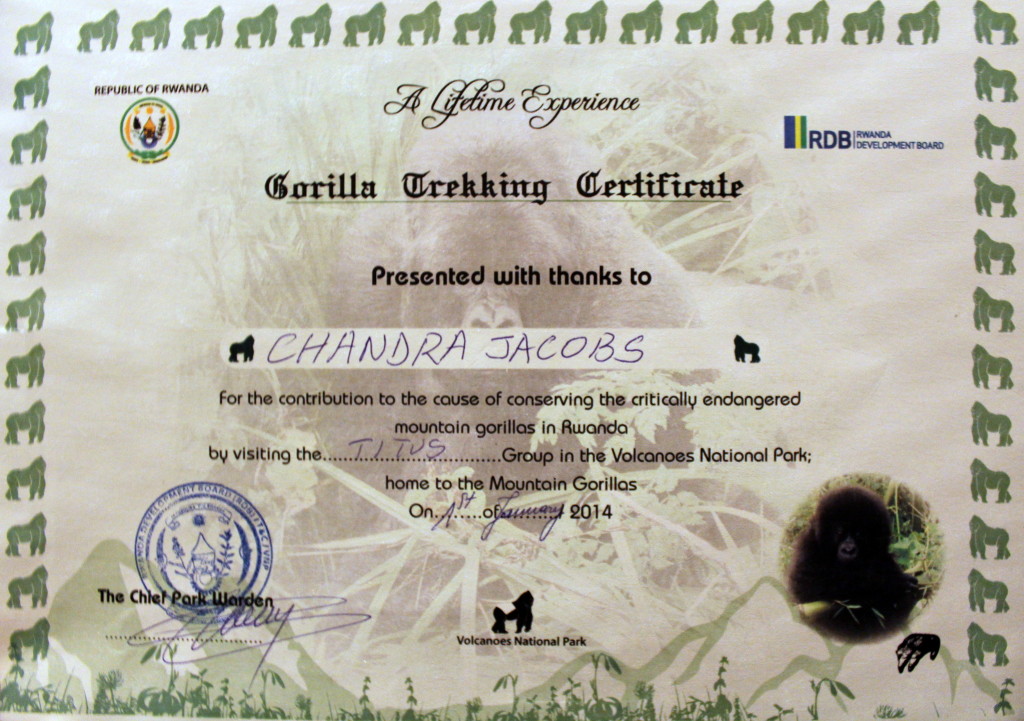 Marv was a good sport, considering he didn’t come with us on the trek – he had a successful morning going in to town with a guide and doing some shopping.

After lunch we watched a Rwandan dance cultural performance where, again, I became part of the exhibit. All those Thunderbird Africa Regional Night dance performances paid off.

We also got to a view a few pictures from our hiking mates, the Runkels. Michael Runkel is a professional photographer, who takes pictures for Getty. He showed us not only his shots – which were uber crisp and framed perfectly – but also his post-processing software, Lightroom, and how to use it. We also were impressed with his ability to shamelessly ask people to pose for him – and they did so willingly.  I still have to work up the courage to do this. The key is confidence and no fear – and having no problem direct and telling people how to pose. I’ll try this tomorrow.

It was a great but exhausting day -here’s a picture of me relaxing on the comfy sofas in the lodge lobby, enjoying a cup of spiced tea. 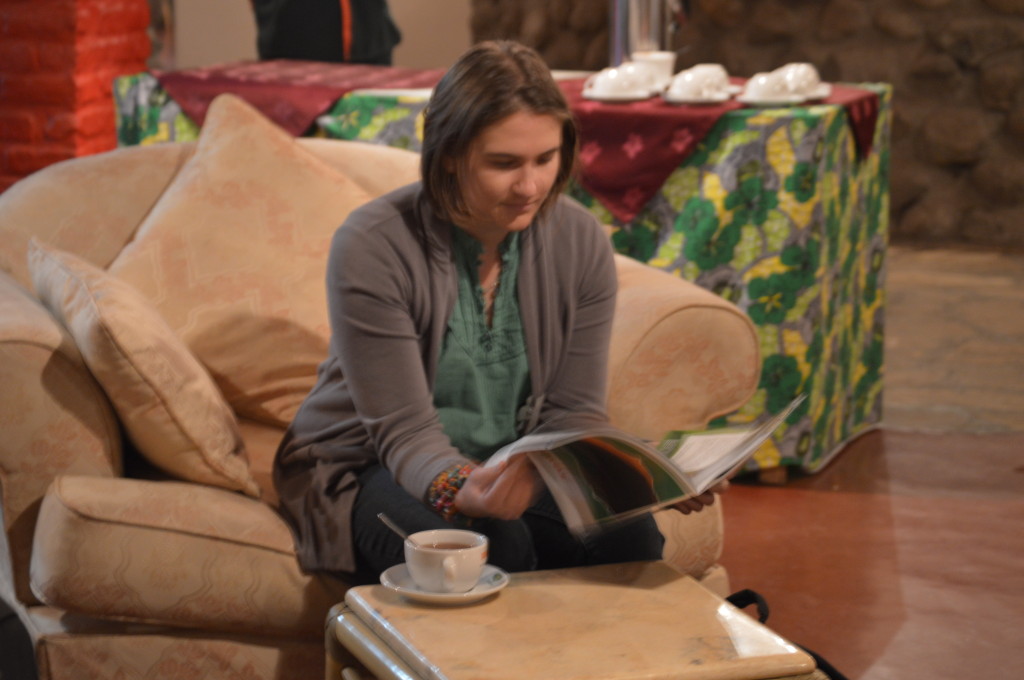 We all went to bed satisfied and ready for our next adventure to Lake Kivu and, hopefully, to Congo.

2 thoughts on “Day 4 – Visiting the Gorillas”