Our journey to Casablanca began at 9AM on our final long bus ride with Gate 1, which took us about 3 hours with one small stop to complete. There was absolutely nothing to see along the route until the city of Casablanca emerged. We first went through the fancy California district and eventually made it to the corniche for a pizza lunch at La Tropicana (some of the blander fare we had encountered). We took a quick stroll on the boardwalk after lunch and then got back in the bus for a 3 hour city tour. 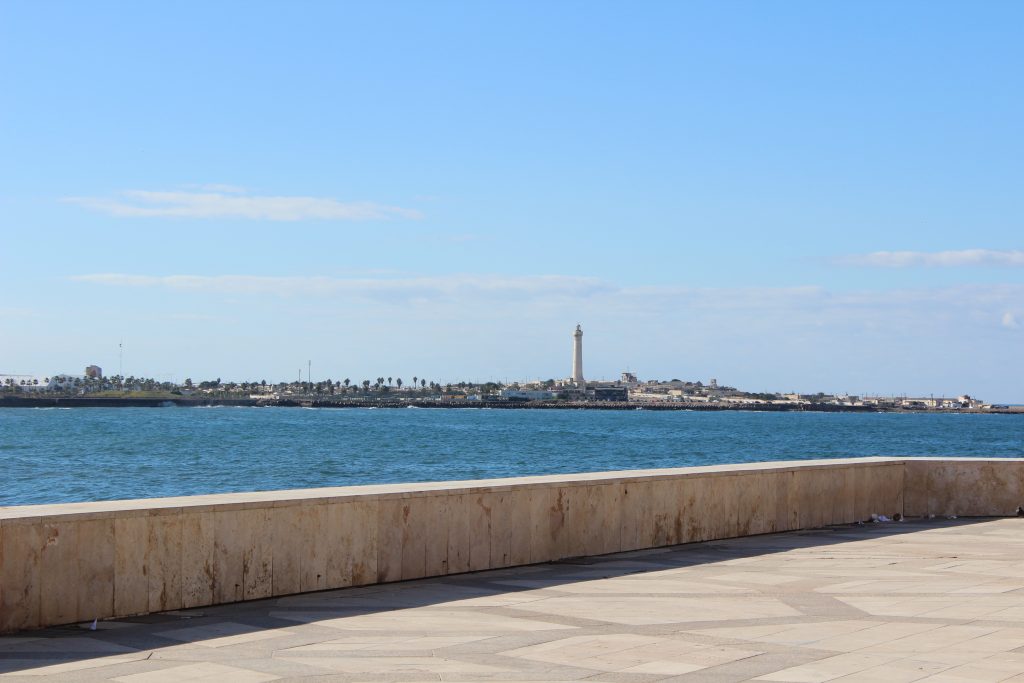 View of the Casablanca corniche from across the bay

We started by driving by Rick’s Cafe, the one used in theory in the movie Casablanca (the real restaurant was a set in Hollywood). It had been purchased by an expat American and turned in to the restaurant with the same namesake. 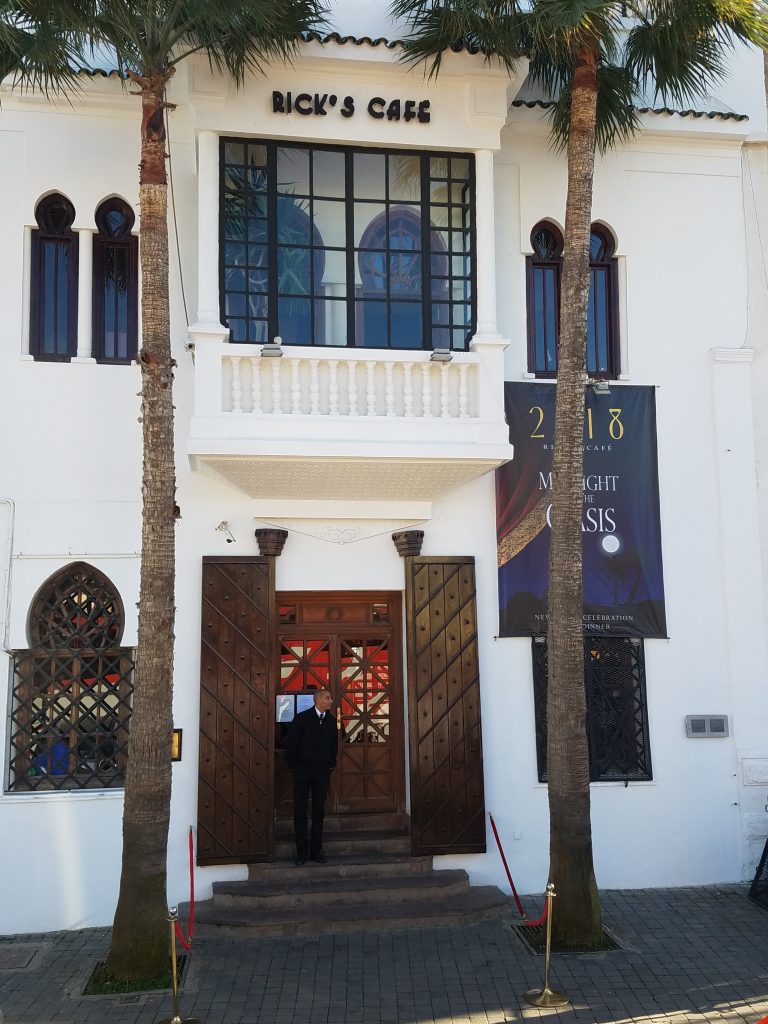 Casablanca was Morocco’s economic capital full of expats and the place where business was done. As such, it was the most modern of all the cities we had visited thus far. If you blinked you might have thought it was Santa Monica.

Our first stop was the Hassan II mosque, the largest mosque in Africa and 5th largest in the world. It was certainly a spectacle, surrounded by water on 3 of the 4 sides, it appeared to be floating while looking at it from a distance. M’hamed gave us 30 minutes to walk around and escorted the people who wanted to pay to see in the inside on a quick tour within. In retrospect, Brendan and I probably should have done this. I was less than thrilled to see yet another mosque and paying for it was also unsavory. Brendan had never seen the inside of a mosque, however, so it could have been interesting for him. Looking on the internet later, the pictures showed the sheer enormity of the complex and it did look magnificent. 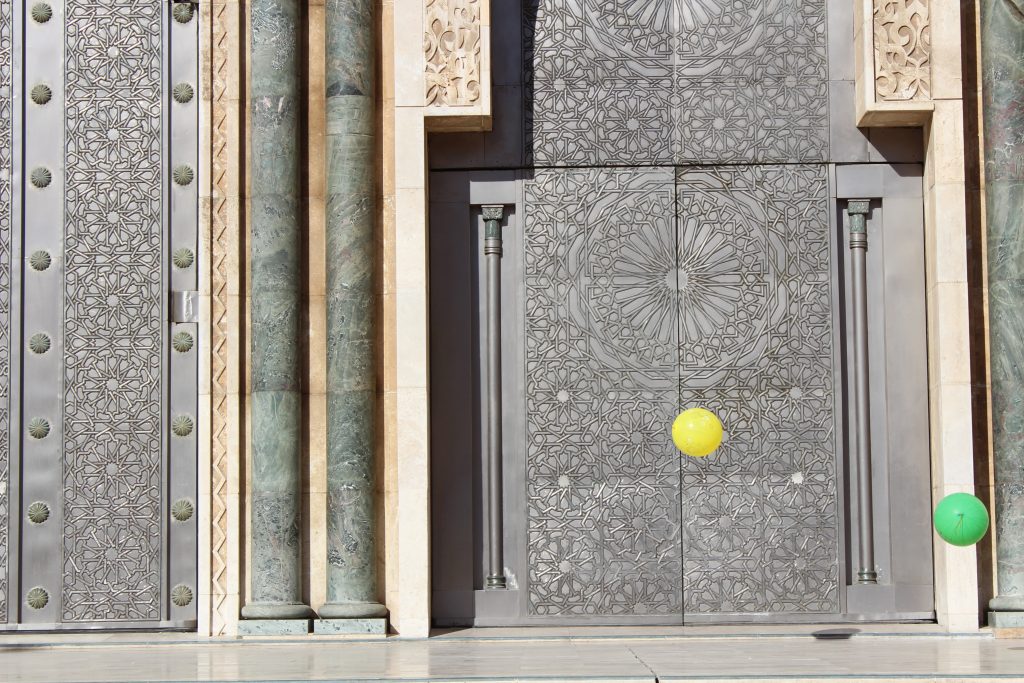 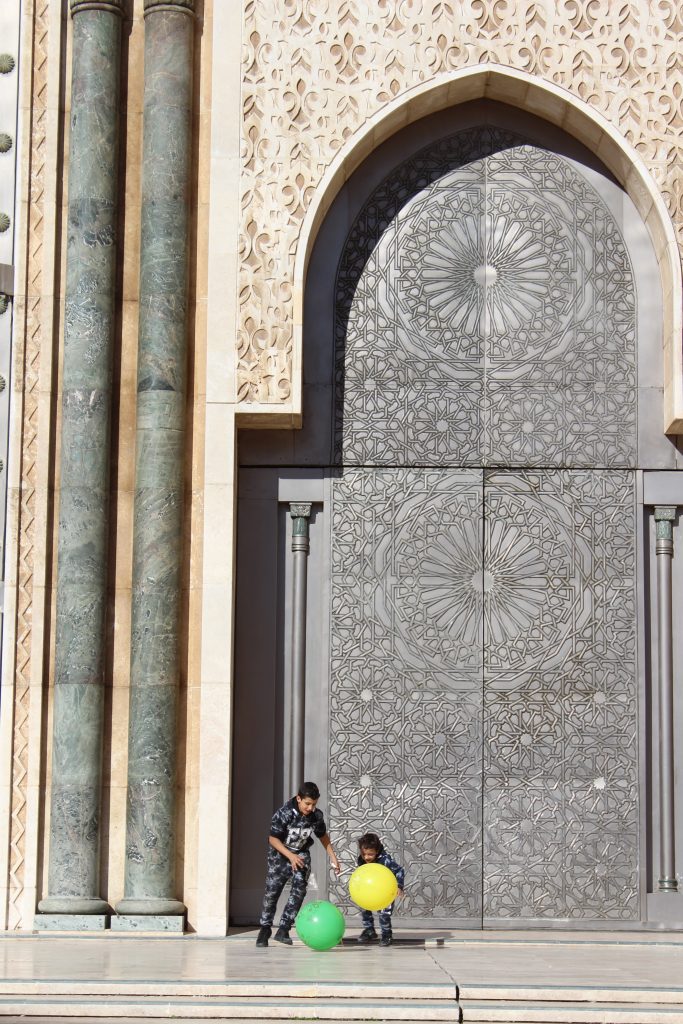 While we waited for the people to finish inside, the Hassan the bus driver took us to a scenic overlook nearby to capture these nice shots where you really could see this Casablanca mosque floating on water. 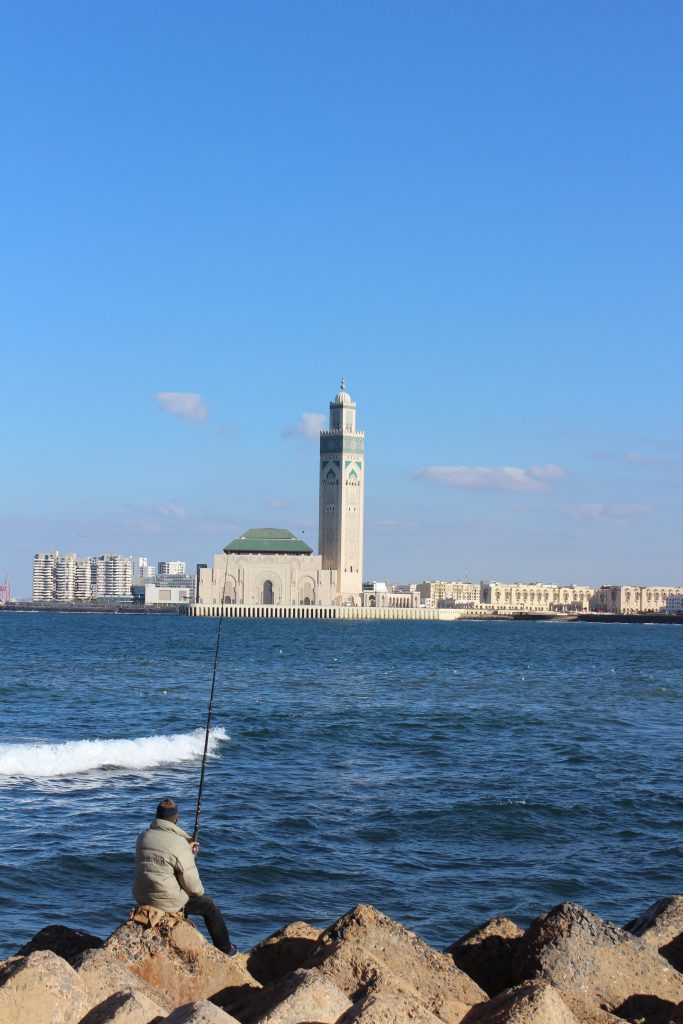 We went back to the mosque, picked up the rest of the group, and continued our tour. The next stop was the city center and the main square, where many pigeons and people could be found feeding the pigeons. It was a zoo (and for no apparent reason). 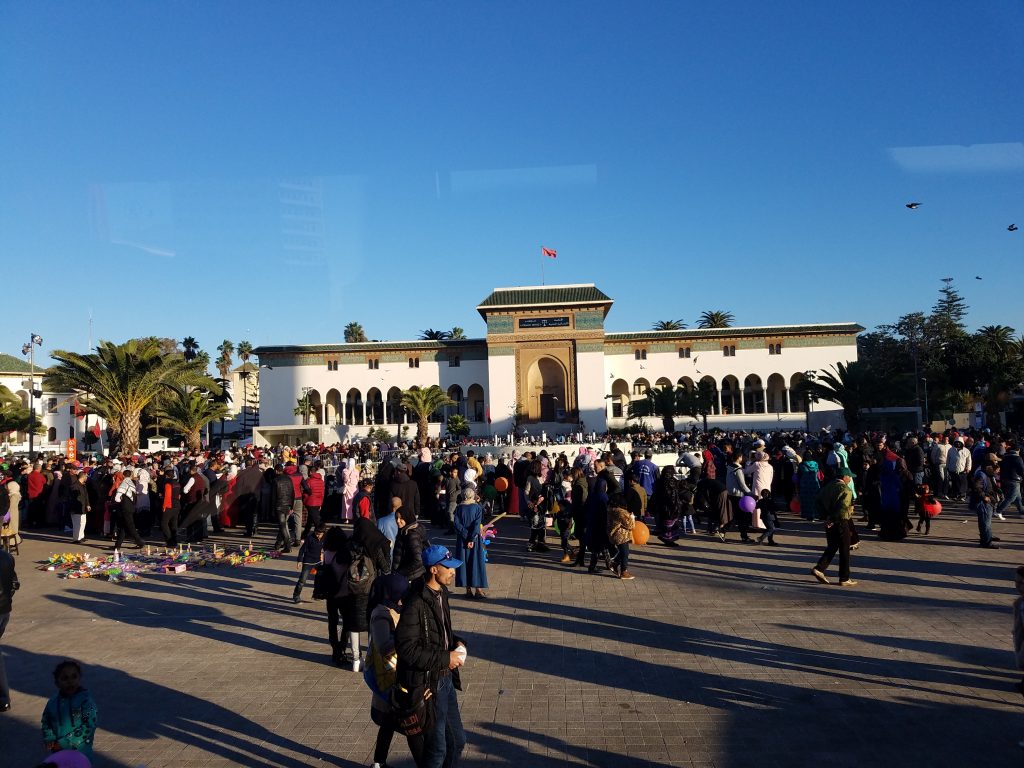 The final stop was Our Lady of Lords church, a 1970s style church that I didn’t even bother to go inside of. It was possibly the most uninteresting thing on the entire tour and really quite a useless stop. We figured that Gate 1 had to appease the Christians among us who might have been feeling Islamed out. Here’s a pic from Brendan, who did decide to go in inside:

Finally, the hotel for our final night in Morocco and Casablanca – the Novotel. It was European economy, clean and functional. I worked out and showered while Brendan took a nap. He was at the worst of this cold. We had one final Gate 1 group dinner to make it through and then we would say goodbye to Morocco.

The bus departed for dinner at 7PM, and we sorted out gratuities as recommended by Gate 1 for M’hamed, Radwan, and Hassan just prior to that. Everyone was extremely appreciative. The dinner was at Le Terraze back on the corniche at was fairly fancy, but still bland. It was a set menu – Brendan ordered the fish and I ordered the chicken, and we both had the eggplant and ricotta appetizer. We were thrilled to see a high-quality olive oil and vinegar on the table for use with the bread. The food was so so, but we really enjoyed getting to know the Mexican family further and especially the film-maker/director Fernando. We talked about nice places in Mexico we should visit (Sayulita) and potentially buy in to, and explored further the concept of the retirement communities for gringos. Everyone at the table thought it was a wonderful idea, and said it had begun already in pockets in Mexico.

Fernando also regaled us with his film career and some ideas for future scripts, one of which he got while touring Ourzazate and visiting a particularly deep and cavernous ancient antique shop. He offered his contact info at the end of the night and the whole family kindly offered to look them up next time we were planning a trip to Mexico so that they could give us advice. And who knows, maybe we would run in to each other in Los Angeles, since they lived in West Hollywood.

While we didn’t get to sit with our usual crew (Danny, Heidi, Nalini, Ravia, Diego, Alba), we found the Mexicans to be just as much fun.

Back at the hotel around 9PM, we tried to work out an airport transport with M’hamed but unfortunately no one was already going to the airport at time that wasn’t insanely early. We opted for the Casablanca Grand Taxi instead, which was a fixed price 300 dirham, making it easy.

In the morning, we changed a few dollars for dirhams at the front desk for the cab fare, grabbed a quick breakfast, and were on our way at 1030AM for our 330PM flight to Lisbon. We managed to leave the country with only 7 dirhams left in our pocket. All went smoothly at the airport, after waiting again for the 3 hour ticketing desk opening. We enjoyed the premium lounge on the inside and everything was on time for our TAP flight to Portugal. Bye bye Casablanca.

← Marrakesh by night Lisbon by night →