Upon waking up by accident at 6AM, I realized that the alarm didn’t go off (which I was certain I set the night before) and it was almost sunrise over the Badlands National Park. Sunrise was at 630AM, so we had a very short time to get dressed and dash to the park entrance, which luckily was only a 15 minute drive from our cabin. Elana was driving today, and did an awesome job getting us there fast, deer at dawn be damned.

We entered at the entrance nearest our lodging (on the West side). Oddly enough there’s no data on Google Maps for the park (which was fine since we were entirely unplugged for the 4 days anyways), but there was a National Park brochure we picked up that had this map on it. The Badlands formed a loop with the highway being the top of the loop. For this morning, we would come in from the West, exit from the East and then take the highway back West to Wall. 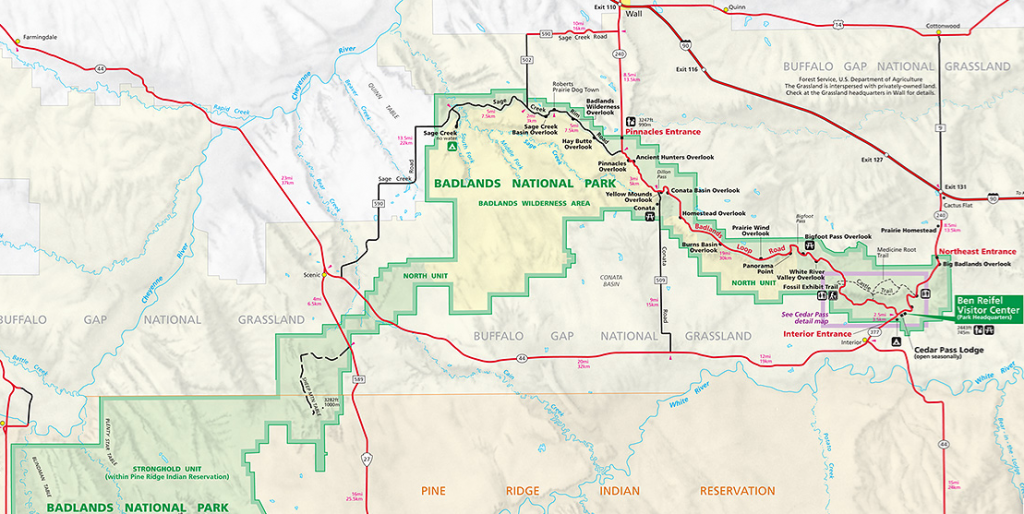 We bypassed the money dropbox at the park entrance since we were short on time and hit it up on the way back in. Good thing too because we wouldn’t have been able to get a receipt and proved we paid otherwise since no one was on duty that early in the morning (and we needed the receipts for later entrances).

I had done a lot of research the night before on finding the perfect place to set up and watch the sunrise (Doors and Windows and the Yellow Mounds came out on top, plus we had a recommendation from someone we met along the way for Doors and Windows). That plan was out of the window now, and we just ending up stopping at a few random places as it struck us.

It was worth the rush, because we made it JUST in time. I captured this Panoramic from our 3rd stop, the Yellow Mounds, which offered the best view of the sunrise in the entire park.

We had a perfect view from the Yellow Mounds since the sun was rising (obviously from the East) and the viewpoint was looking West – so you could see the landscape change from dark to light as the rose and cast its rays directly on the Badlands. 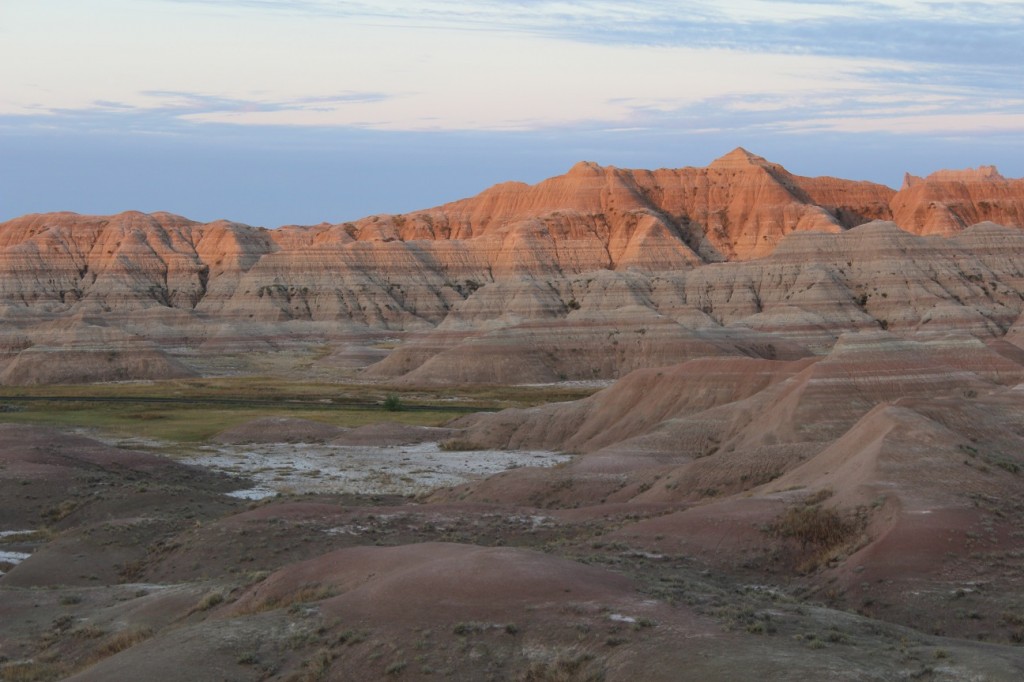 Here’s another one I particularly like with the road beckoning us to follow the sunrise, and the cloudy sky starting to clear ahead. 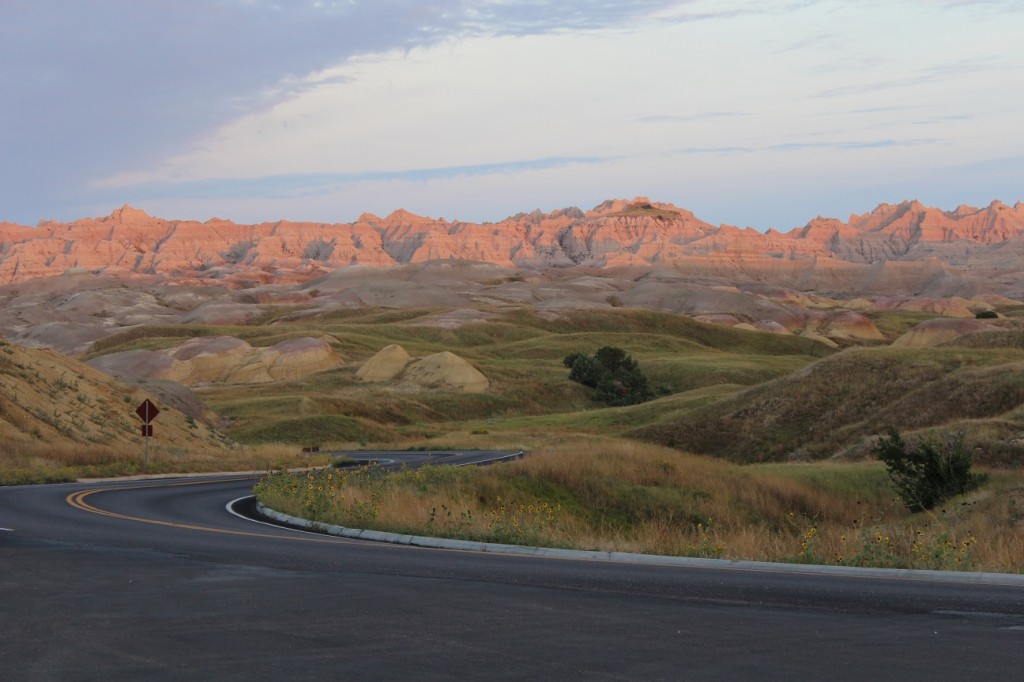 And here’s a shot of the Badlands contrasted by the prairie, which we took a little bit later on our morning drive. 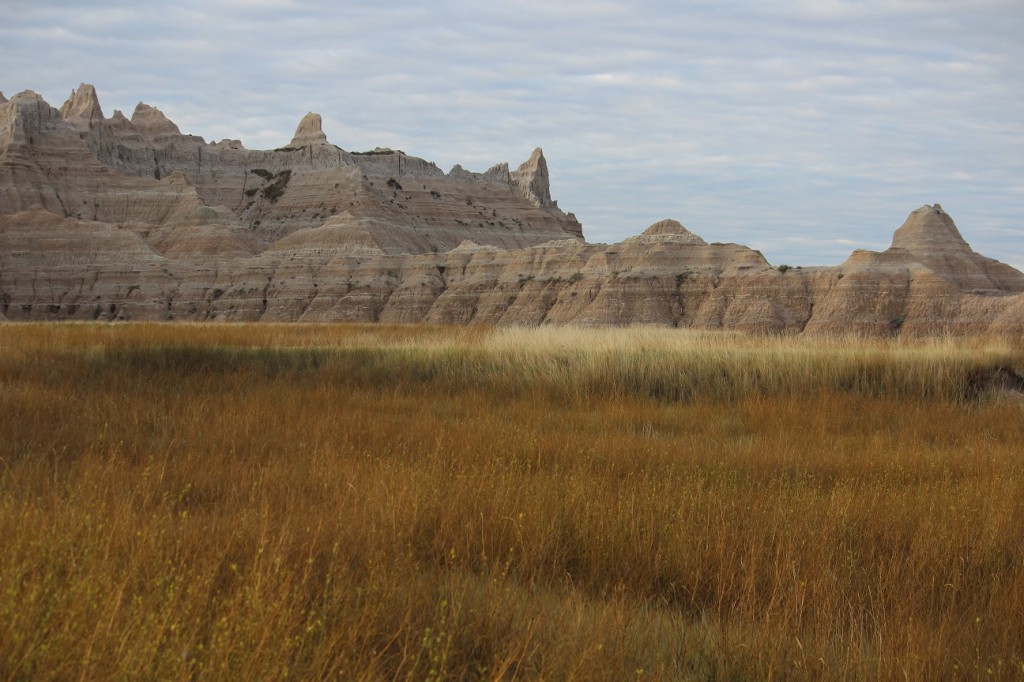 We also stopped at the Doors and Windows towards the Northeast park entrance but there was no great shots, except for of this cute (and tame) bunny rabbit. 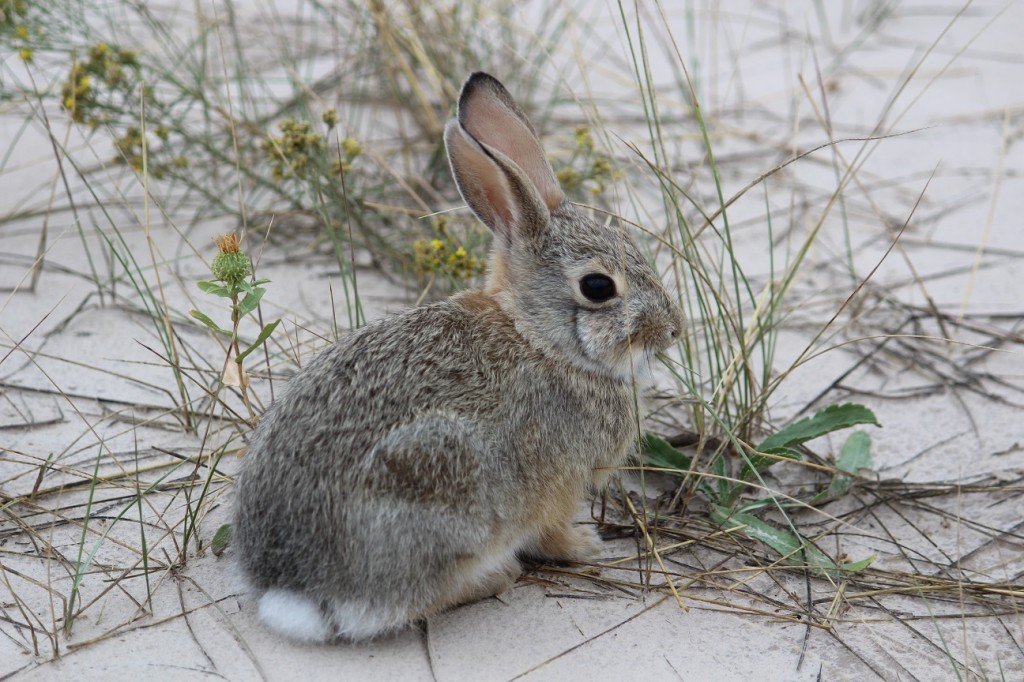 Afterwards we went to breakfast and explored Wall. Read about that here.

After Wall and a CJ nap, we went back in to the park via the same West entrance near out cabins. We stopped at Prairie Dog land right before the park entrance and observed these funny creatures (it wasn’t really a “land” in the sense of Disneyland – it was just a prairie, which is their natural habitat). 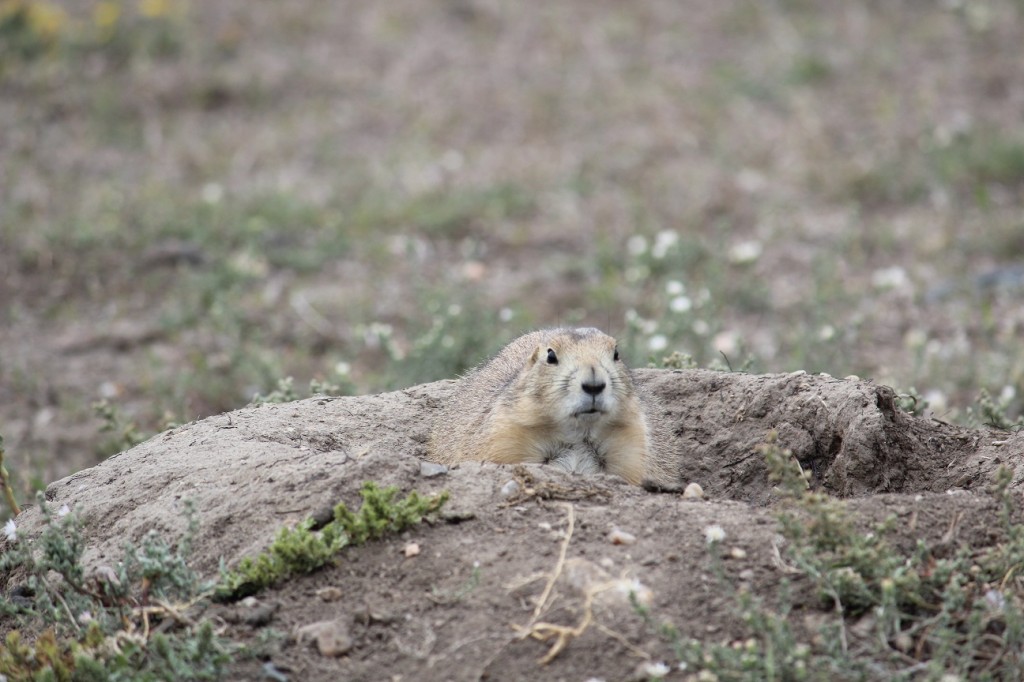 Prairie Dog in the Badlands

took a side road South out of the park and explored the Indian reservation area, where the Southern half of the Badlands was located on. We had been advised not to stop or dawdle, or cross off the highway onto Indian land because we could get shot at. Kind of hard to believe but we still heeded the warning.

Along the way we saw some horses. 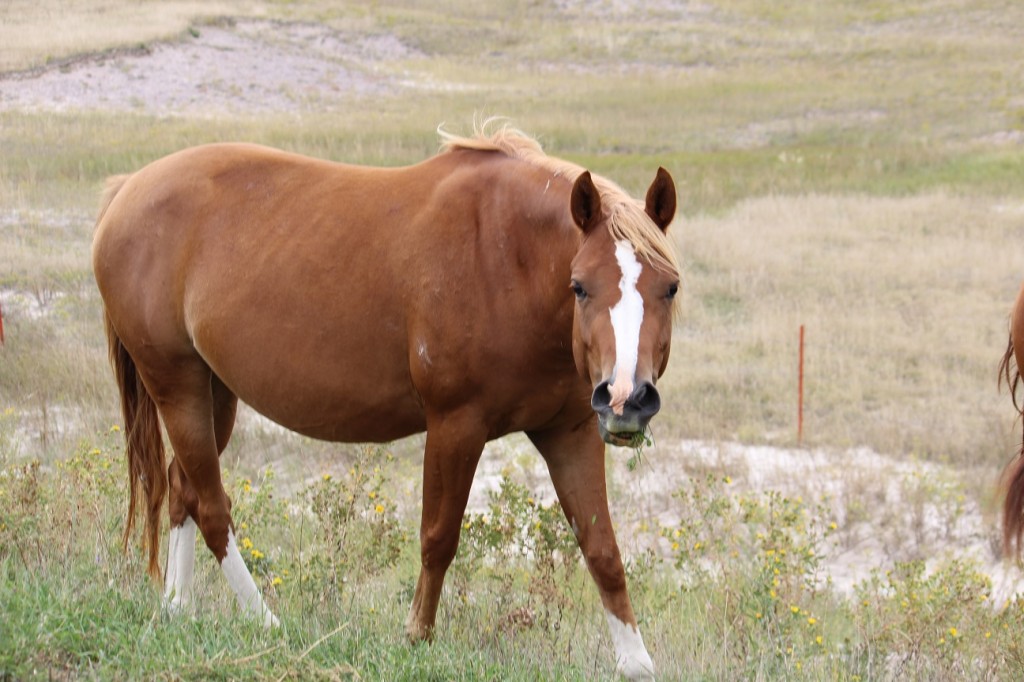 That detour took us about 2 hours and we didn’t see a whole lot of anything. The South part of the Badlands isn’t as magnificent as the North park where the Visitor’s Center is located. I would say skip the Southern drive.

We did see a herd of buffalo roaming on the hillside. We think those 2 on the top right are just fake outlines. 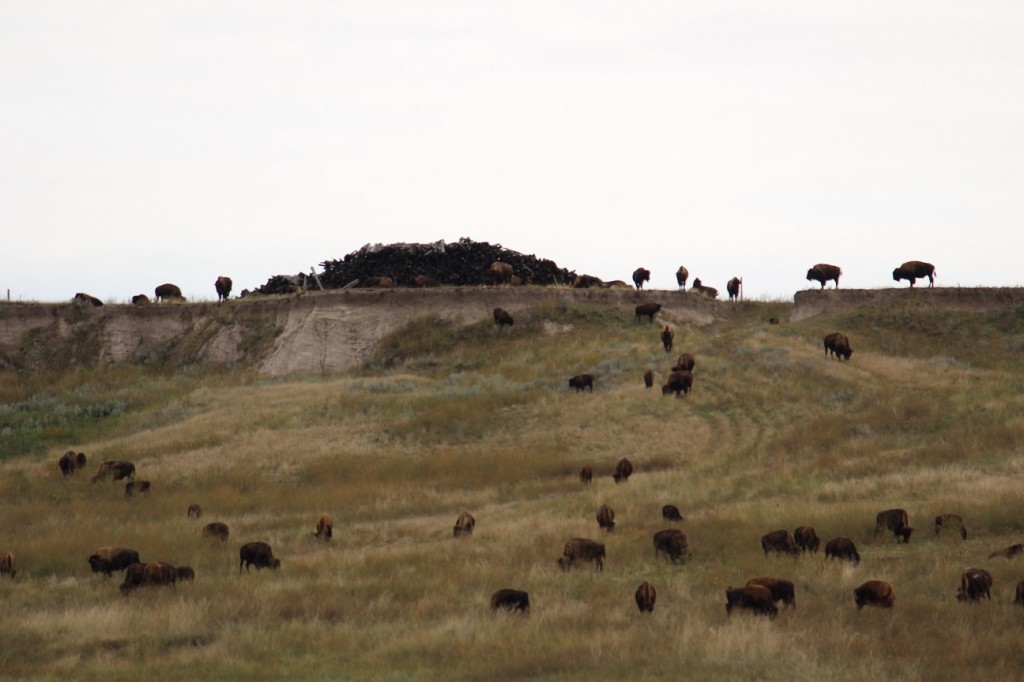 Upon reaching the park, Elana was in need of lunch so we stopped at the Visitor’s Center, gift shop, and restaurant towards the Eastern side of the park. Elana had some fish while I ordered Kuchen, a local custard-like cake dessert (Kuchen means cake in German) with chocolate chocolate chip ice cream made by the University of South Dakota dairy department. it was delish and not too heavy.

At this point we set out to find a good hike. It was an overcast day so the conditions were good for a long hike. 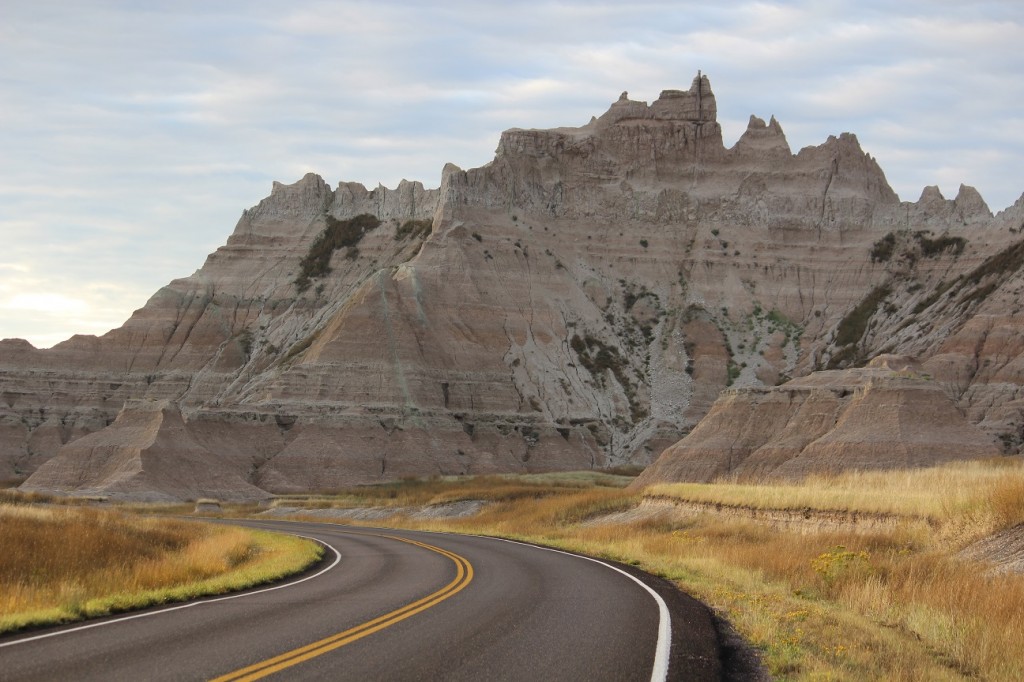 We unintentionally did a really *really* long hike – probably 6 or 7 miles, since we started at the Medicine Root Trail Loop but then ended up going up and over the pass at Saddelback. 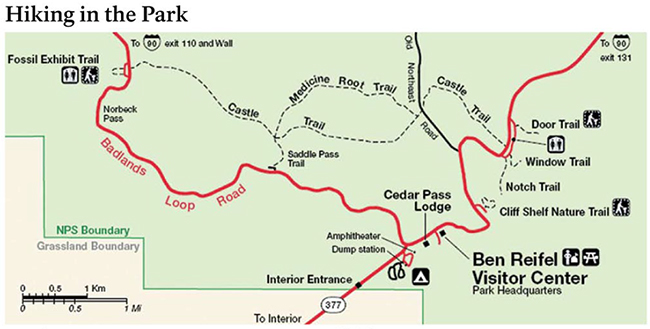 Here was the view from the Medicine Root Trail – it was essentially flat, easy, and mostly prairie. 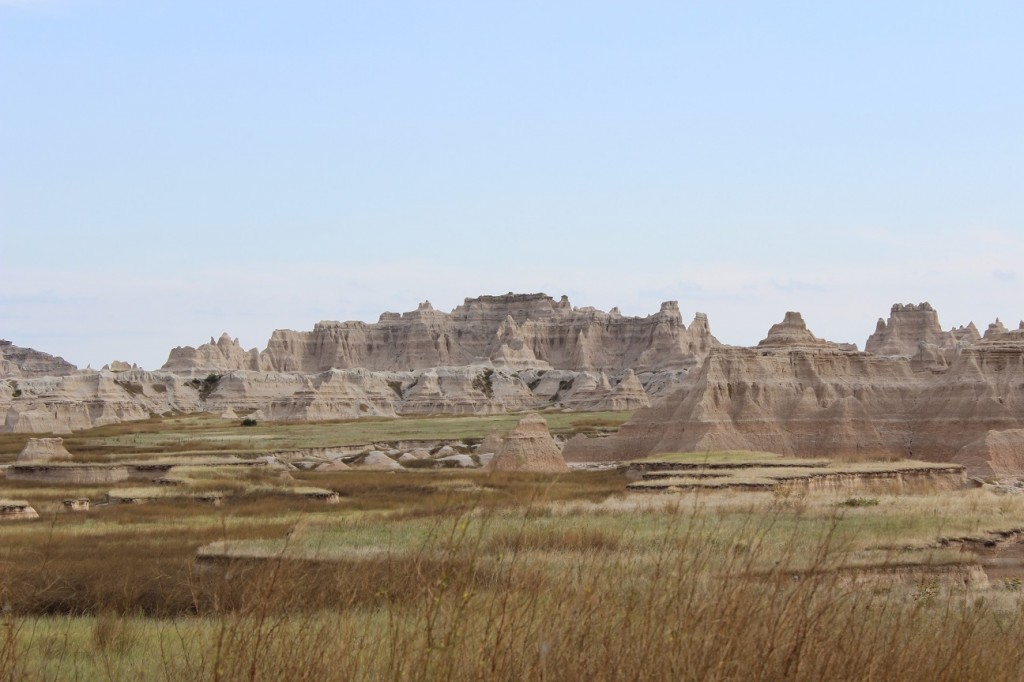 Then we climbed up Saddleback and came up and over the other side back to the road. This was very steep and difficult. 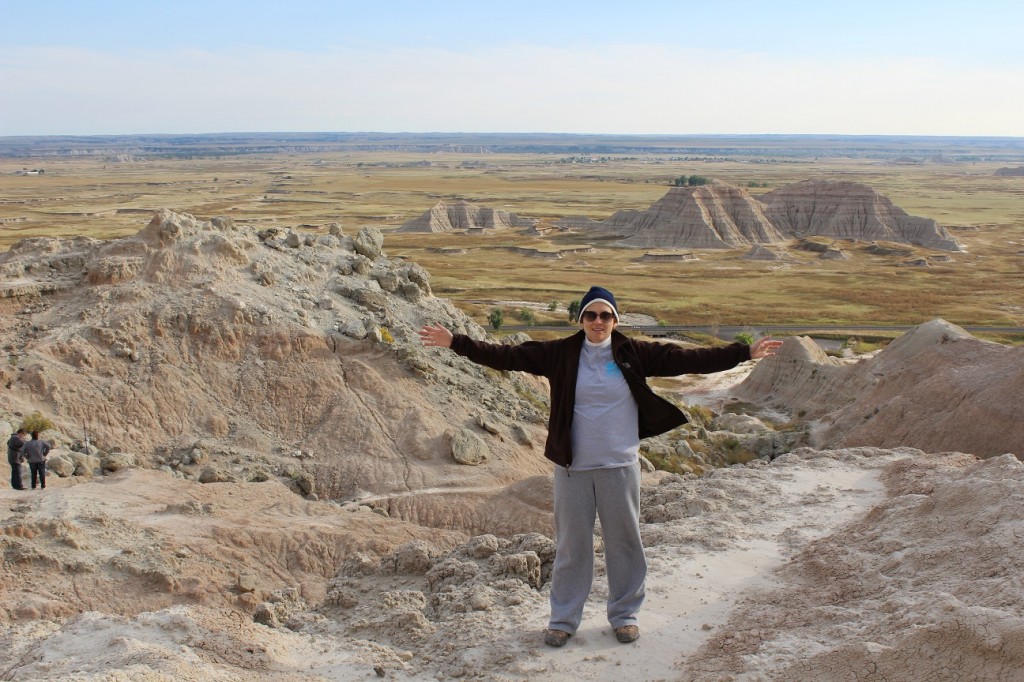 King of the Mountain

Then we had a 3 or 4 mile walk back to our car, and we were competing with our plans for the Badlands Sunset. 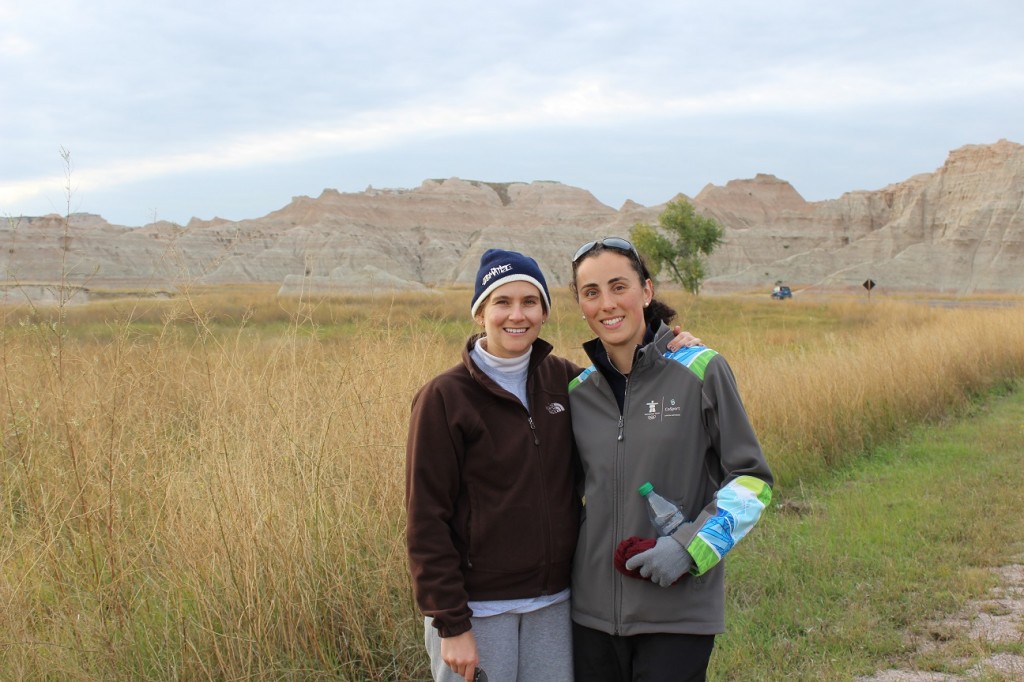 As usual we weren’t where we needed to be when we wanted to, so we ad-hoc’d it and took some random pictures of the sunset as we finished walking the final leg. 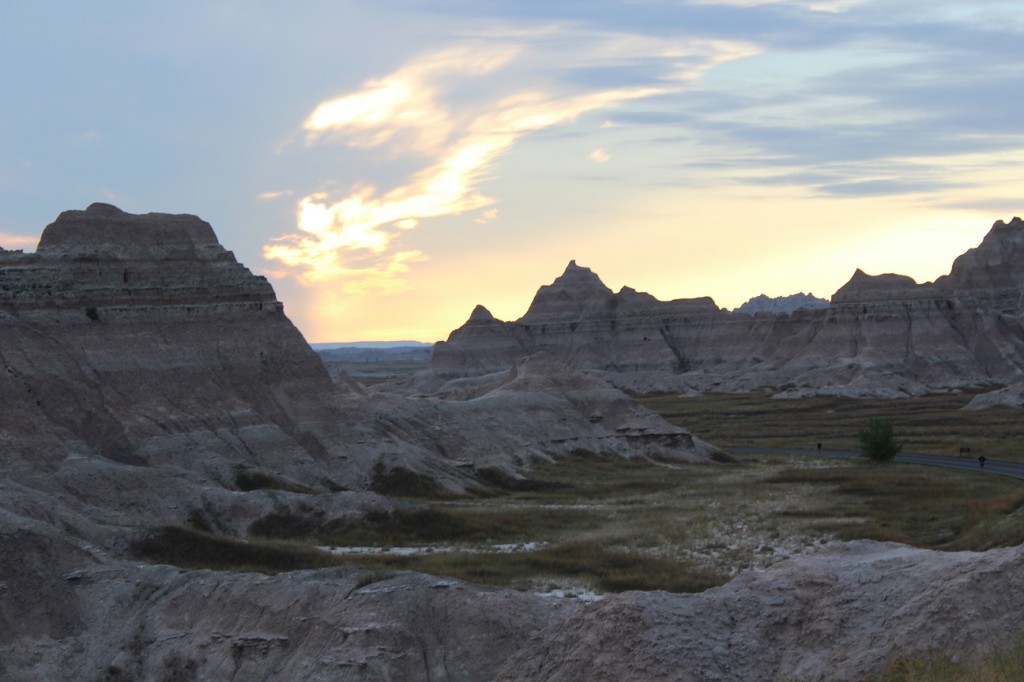 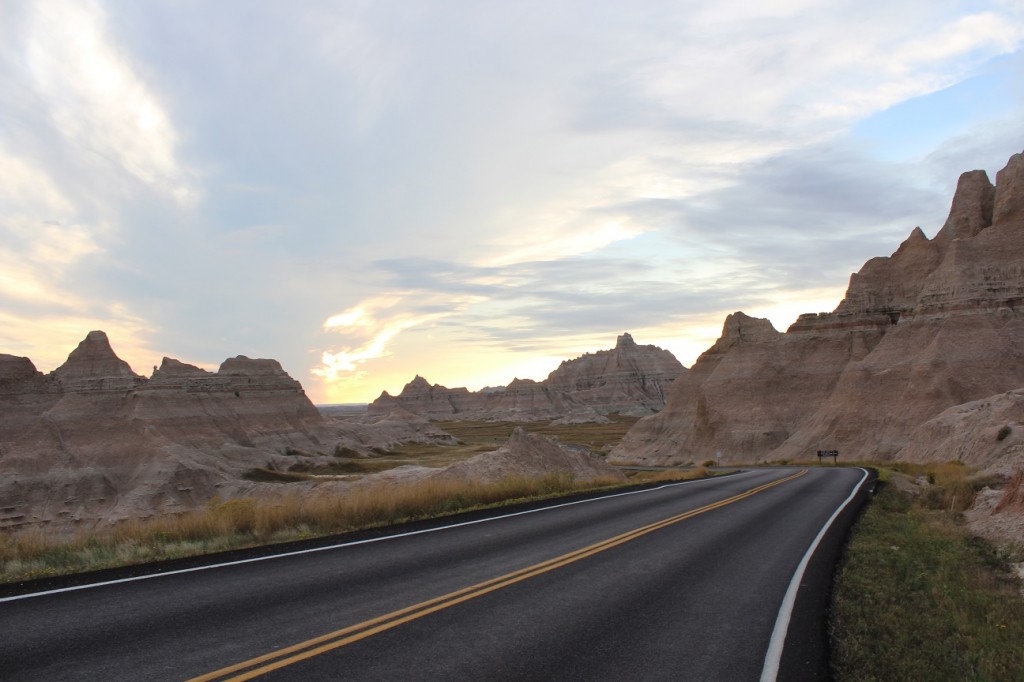 We thought the Badlands sunset was actually more spectacular than the sunrise. 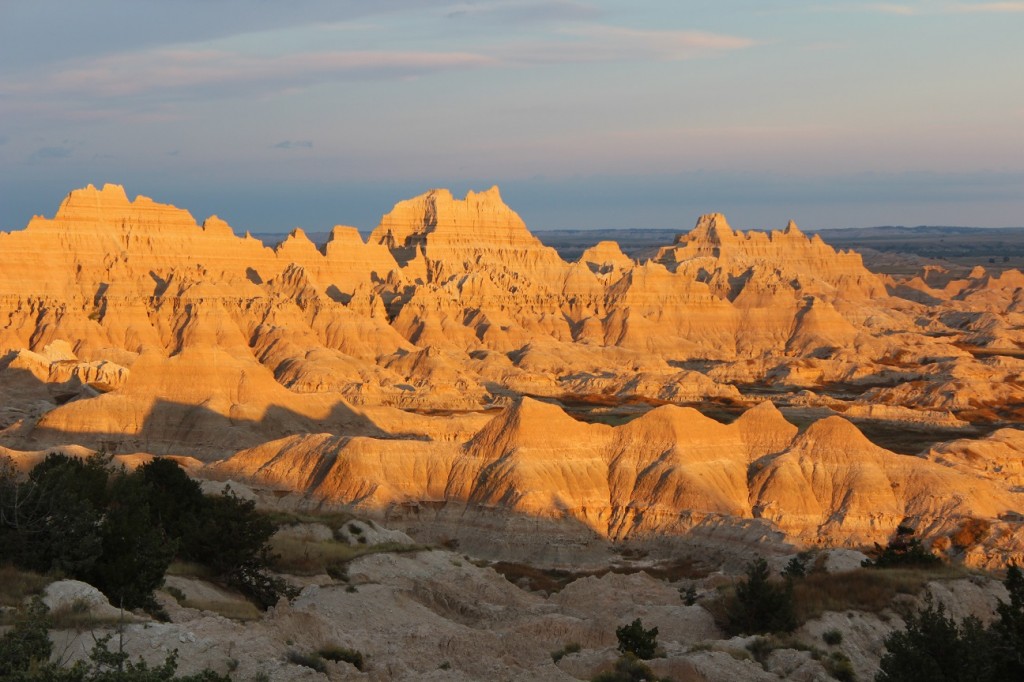 And here was our last shot as the sun disappeared and cast an orange glow into the sky, which cast a Halloween-like, eerie mood over an already other-worldly landscape. Did I mention we felt like we spent the whole day on Mars? 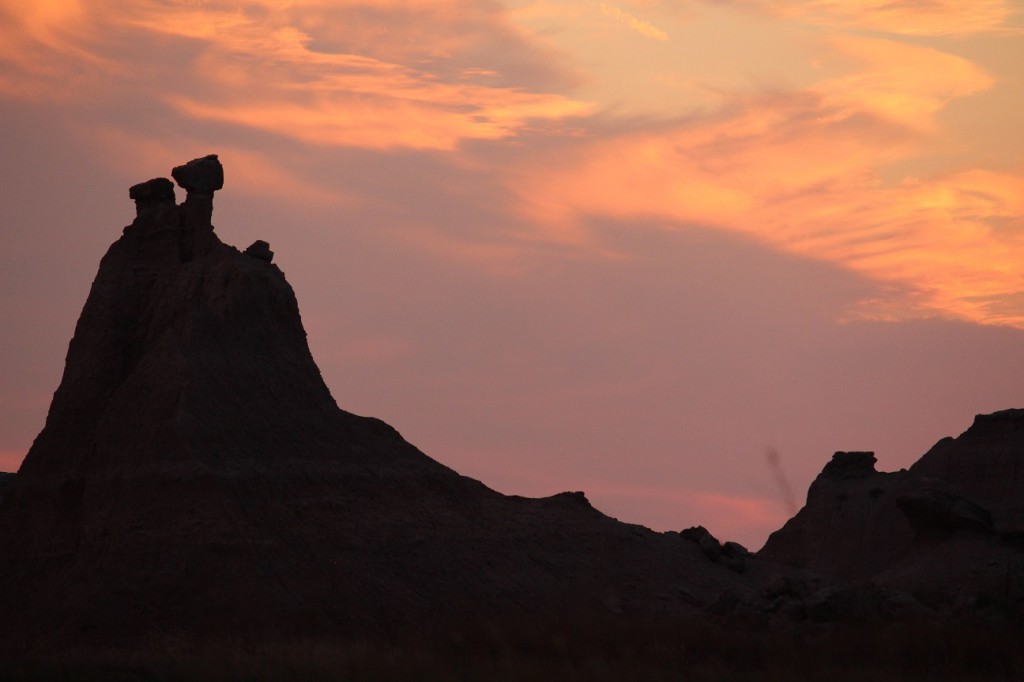 We got back to the room by 8PM and were off to dinner in town after I took a quick shower.

2 thoughts on “The Badlands”