In the past 3 weeks, I got married, traveled to the UK for work, had our contract accepted for a house, brought our cat to the pet ER, and also prepared for our trip to visit a friend getting married in Nicaragua (and THEN spending some time in Costa Rica); so actually merely arriving in Nicaragua was the easy part!

After booking some First Class tickets on United (using a $2000 voucher I received for volunteering to give up my seat on a previous flight), my husband Brendan and I had a long day ahead of us on Thursday, Feb 15 in anticipation of arriving in Nicaragua. We set out from our Highlands Ranch townhouse to the airport at 320PM via Lyft so that we could catch our 530AM United flight to Houston. All went as planned, and we probably left a little too much time to make our flight. We enjoyed our premium cabin food and service experience (soft product), even though the hard product on these regional planes left something to be desired (seats were old, no entertainment systems on the DEN-IAH leg). We enjoyed a few mimosas before 8AM 🙂

The flight was on time and we easily made our 45 minute connection in Houston onward to Managua, and we would soon be arriving in Nicaragua. However, one of our travel companions, Derek (also arriving in Nicaragua for the wedding), coming in from Omaha, was not nearly as lucky – he had to run to make the gate before it closed given he only had a 20 minute connection. But he made it. The second flight was also on time and easy – except for my seat-back entertainment unit being broken for the first 30 minutes, in United First Class at that. It eventually fixed itself after the flight attendant performed a system reset on everybody’s entertainment units – a ridiculous product design. We had a few more adult beverages and a second breakfast of a berry bread compote and decided to watch the movie “Three Billboards Outside Ebbing, Missouri.” It was a gripping drama that was incredibly well-written and well-acted, and we rather unexpectedly enjoyed it. We only had 30 minutes left and then pretty soon we were on the ground, moving through immigration, and arriving in Nicaragua.

Immigration consisted of answering a few simple questions and paying $10 USD each. Our bags arrived 15 minutes later after being stamped in, and we cleared customs in a flash. A driver, Byron, was waiting for the three of us (myself, Brendan, and Derek) with a clearly marked sign and he whisked us away to the parking lot and in to an air conditioned car. It was hot out (90 degrees F) but not oppressive, humid hot. Byron was the driver that Brendan’s friend (Brett) provided for us, at a cost of $70 to bring us from Managua to Leon, where we would be staying for the next 3 days. Brett is the one getting married to a Nica (a local Nicaraguan) and the whole reason why we were arriving in Nicaragua in the first place. Byron spoke very little English but Derek did a good job trying to engage him in broke Spanish, and we all got a chance to practice over the slow (largo) 2.5 hour drive through city and country. I got a chance to take another nap – I was in the throes of a cold and needed all the rest I could get, especially given the early morning departure. 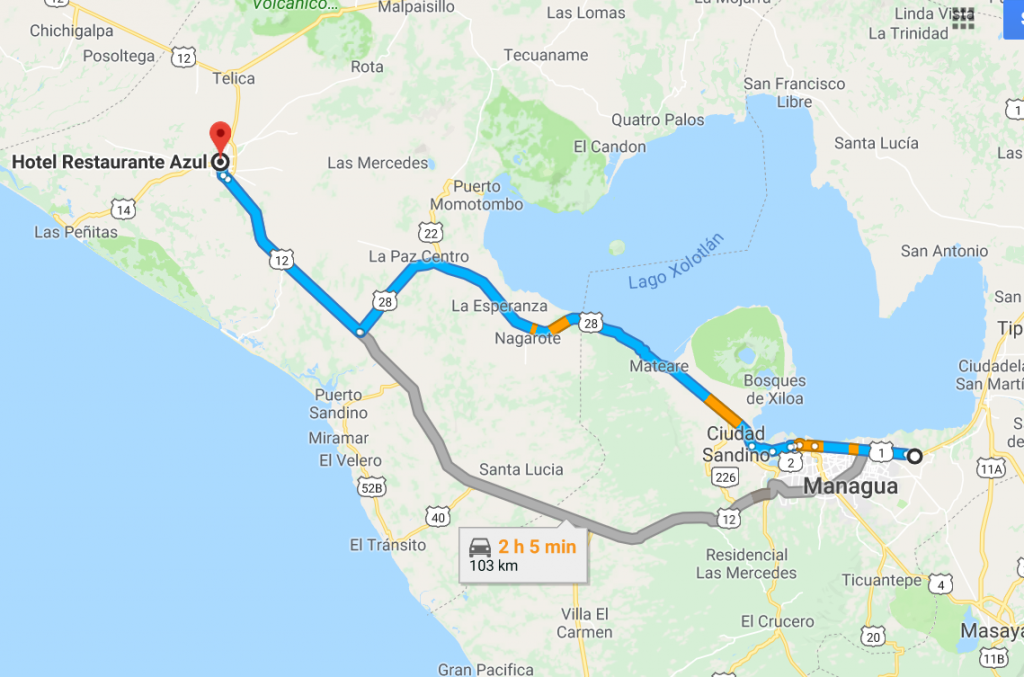 Arriving in Nicaragua – the road to Leon

We were staying at Hotel Restaurante Azul in the old town, just a few blocks from the main square and the cathedral. It was small, but charming and well run, with very helpful staff and clean rooms. Here’s a sampling: 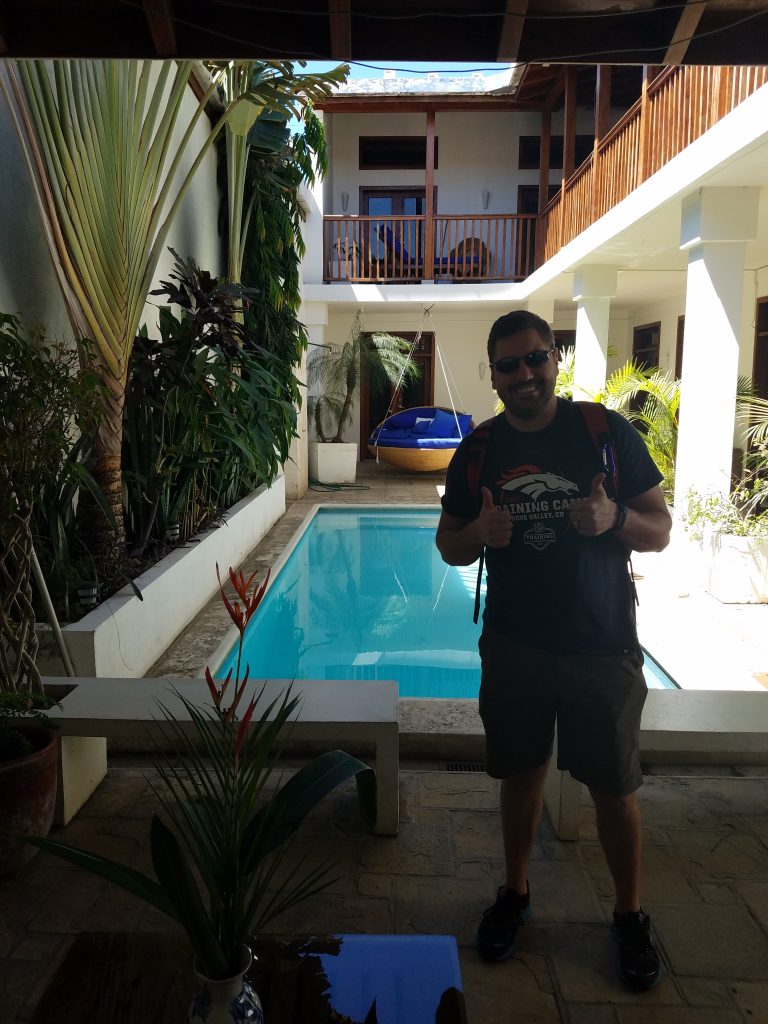 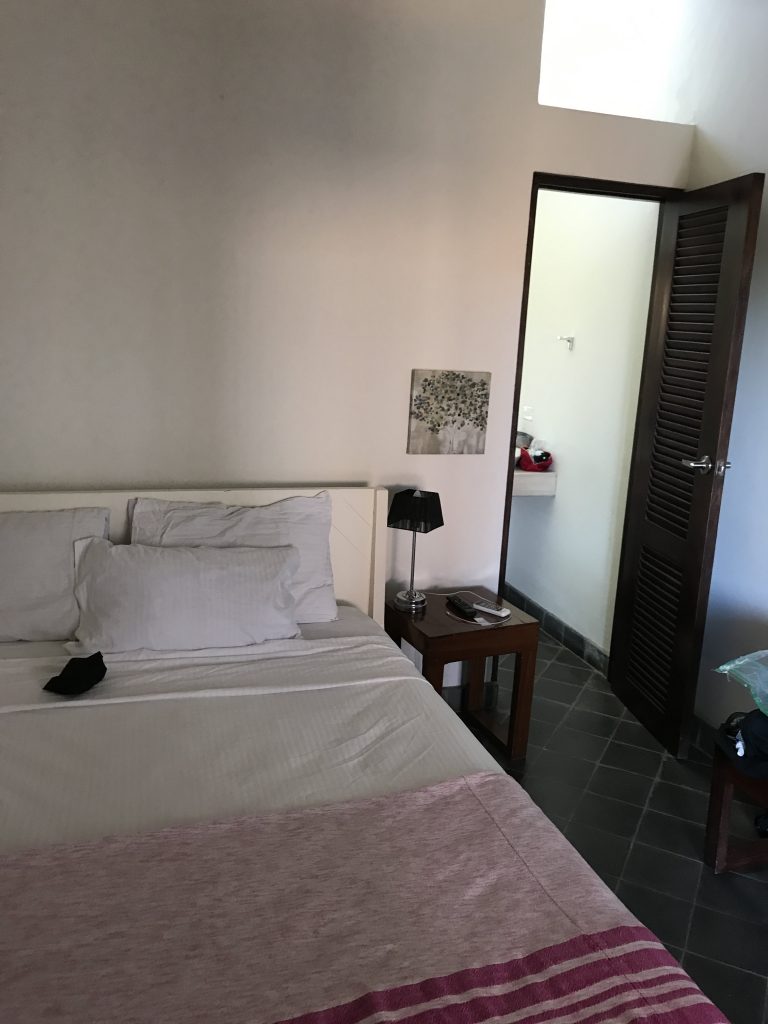 We had a nap and then met Brett, Derek, and the rest of the wedding party at Brett’s house about 6 blocks away. On our walk we discovered one of the many joys of Leon – radio trucks driving up and down the residential streets blaring dance music for no apparent reason. We also noticed that the sidewalks were super high, but generally in good shape, and the streets were very clean – we were later told that the high curbs were to combat flooding in the rainy season, and the cleanliness did not extend beyond the old city in Leon.

Brett had been living in that house in Leon for about 4 years (having previously lived in Aposentillo, outside Chinandega on the coast). In it, he ran a bike rental business and he had recently gotten in to real estate, selling property to expats through a boutique firm focused on this niche. He had recently acquired a lot of land on the beach as well, made it in to 4 plots, sold one off (will eventually sell 2 more), and will ultimately have a beach house on the remaining one where he and his wife-to-be Sylvia will build a tiny house (they are currently doing a GoFundMe campaign).

We proceeded to catch up over a custom punch that Brett named “Sunset on the Beach” – consisting of pineapple juice, grenadine, coconut rum, and a maraschino cherry. It was deadly.  Over a few glasses we got to know Brett’s side of the family (Sylvia’s side spoke no English, and unfortunately our Spanish required way too much effort after a long day of traveling). After about an hour of chatting, the people actually in the wedding went through the proceedings, the legal aspects, and the rehearsal. Brendan and I were basically in the way at this point, so we took a backseat role, sat in some rocking chairs, and checked out for about an hour. 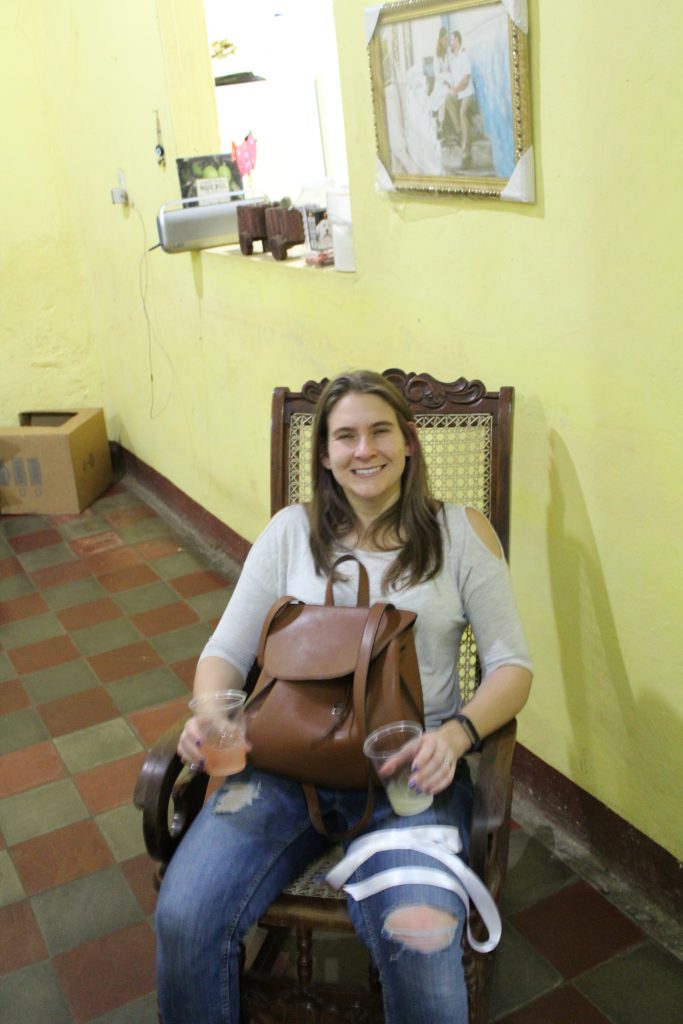 By 8PM, we all headed to a Cuban restaurant for dinner, a place called El Bodegon, which incidentally is the highest rated restaurant in Leon on TripAdvisor (we had already scoped it out with plans to check it out the following night). It was unassuming from the front but spilled out into a cozy patio with a table set for 12. Entrees were about $10 USD each and you got to choose a type and a preparation – I went for achiote rubbed chicken with bell peppers on tostadas and Brendan went for jalapeno cream and mushroom chicken on tostadas. Both entrees were fresh and delicious, but the drinks were the best part. This restaurant was known for frozen mojitos and sangria, so we got one of each. They were fresh and delicious. 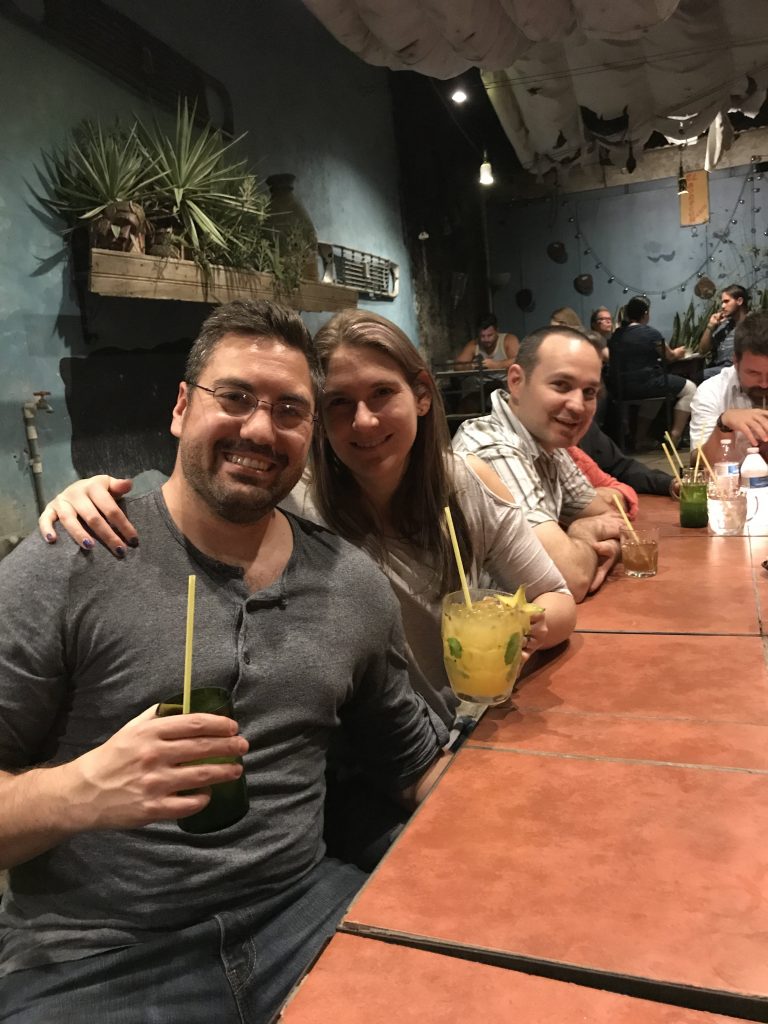 By 10PM the party was winding down and we were exhausted. We were only a few blocks from our hotel so getting home was easy. On the way we passed a few dead dance clubs with music blaring a little too loud for places with little actual activity on the inside. Mostly American pop music was being played. But, we left those for another night. Tonight, sleep.