The next morning we woke up more or less at the same time and prepared our plan to hike around the Arenal Volcano. We decided to have a small snack at the Ceiba Tree Lodge but save our actual breakfast for the German café we had seen previously in Nuevo Arenal which had good reviews. Before taking off, we arranged a dinner reservation with Dirk at 7PM for $19 per person for steak night (the meal he had served the previous night while we were just hanging out in the main area looked amazing, and all the guests seemed to enjoy it). The cat was hanging around too. 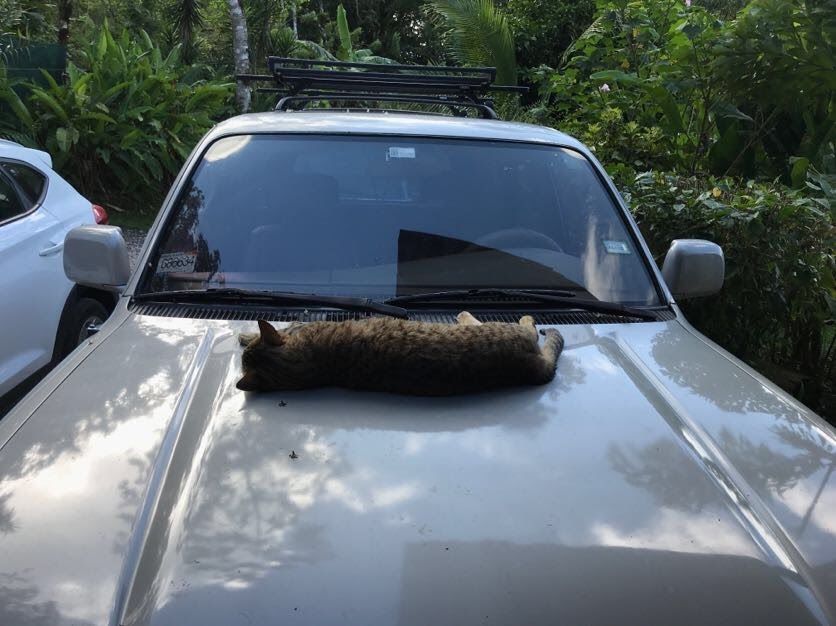 We made it to Nuevo Arenal again, which was a short 15 minute drive from our lodge, and found a table easily at the German restaurant. We were finding that everywhere had good Wi-Fi except for where we were staying apparently. We took care of some more house buying related stuff back in Denver, and then set to ordering. I ordered the gringo breakfast (scrambled eggs, toast, and sausage) and Brendan ordered an apple strudel with ice cream. We were on ‘cation after all! We made sure to have a large breakfast so that we wouldn’t be starving mid-day and end up eating a weird time like the day before.

We were out of there and on the road to Arenal Volcano around 11AM. We were starting to get the hang of the drive between Nueva Arenal and La Fortuna. So much so that we started anticipating the potholes, bridges, and coati sightings that were now a normal and boring occurrence.

About 20 km prior to La Fortuna, we saw the turnoff for the Arenal volcano, which would be our jam for the day. Rather than going to the main Arenal National Park, we were instead headed for a quieter, less crowded park recommended by Dirk called Arenal 1968. This was named after the last major volcano eruption that created the lava field the park trails wove through. It was about a 5km hike taking the long circle route (yellow trail), and park entry was $8 per person. We spent the next two hours weaving through a newer forest (regenerated naturally from 1968) first, and then through the more arid and rocky lava field. The Arenal volcano had still been relatively active through 2010, and we were hoping to catch a glimpse of embers/eruptions at night over a cold beverage – but the last few years Arenal volcano had reached a period of dormancy. This again made us feel good about our decision to stay in Nuevo Arenal as opposed to closer to Arenal volcano.

The hike was moderate. 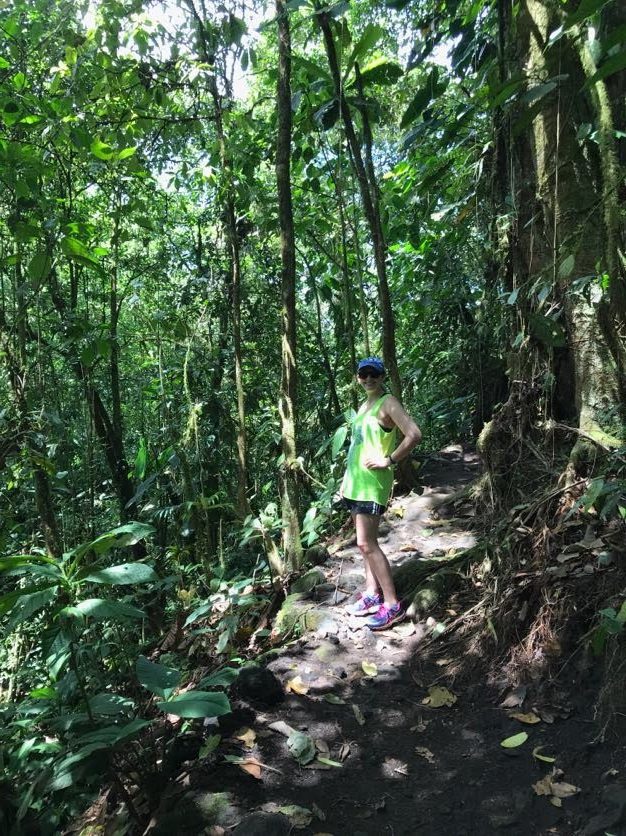 Hiking around the Arenal volcano

The beginning part through the jungle was quite flat, but then the 800 meter climb began over rocky terrain as forest gave way to barren and rocky outcrops from the last Arenal volcano eruption. We were rewarded with a nice view at the summit, which was as close as we ended up getting to Arenal volcano. 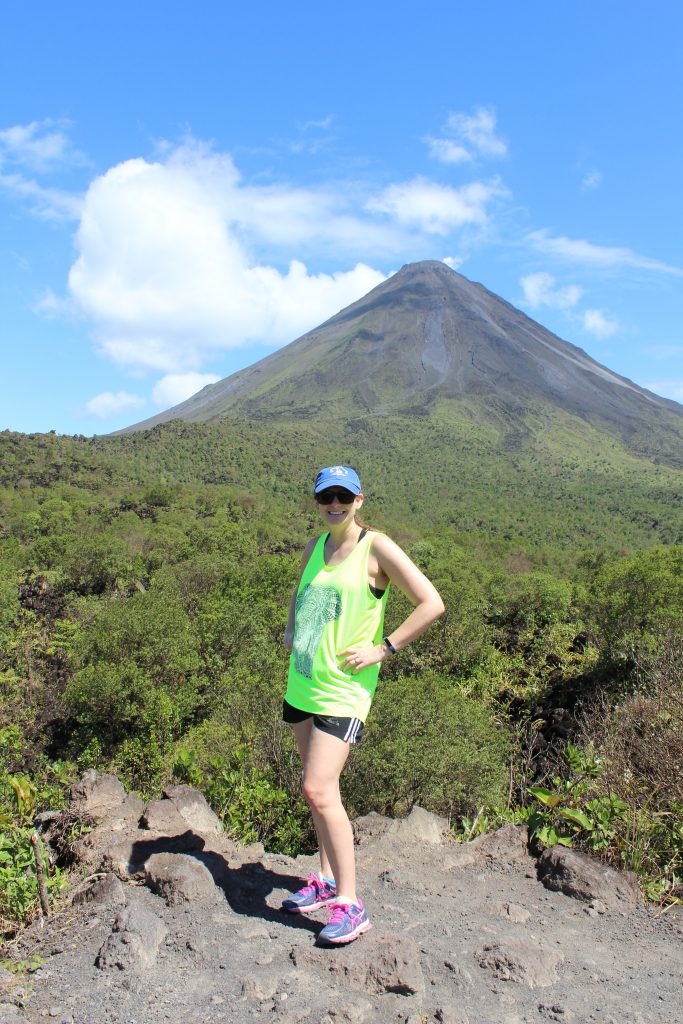 The climb down was quite easy as we made our way back on the shorter red trail, but got jammed up behind large clumps of Germans who were oblivious to etiquette around allowing those on your heels to pass you. By 2PM we had completed the hike and even used the very clean bathrooms at the trail-head once more. 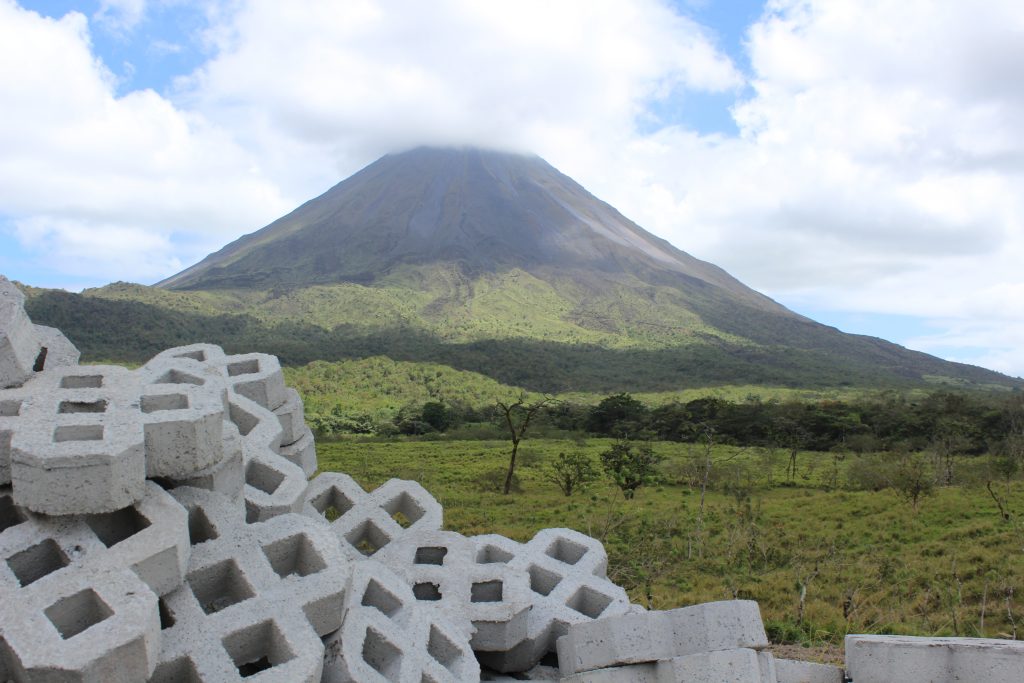 Rather than turning back around towards the main road, we decided to continue further along the dirt road we were on, deeper in to the Arenal volcano area. We saw a sign for a place called “Amigos” with fruit smoothies, which beckoned to us, the parched hikers as we were. It was kind of a shack in the jungle on the roadside, next to a river, but it was just what we needed. They had the best Wi-Fi we had encountered so far, so we did more blogging and photo-uploading while drinking a mango, pineapple, and papaya smoothie and a strawberry-watermelon smoothie. Some intermittent rainstorms came and went while we enjoyed the breather.

After an hour or so rest, we hit the road back out the way we came away from Arenal volcano and back to Nuevo Arenal. We continued past our hotel and in to town to make a grocery run for wine, rum, and water – the three staples of our vacation. We also discovered the location of the recommended restaurant “Moya’s Place”, which was located right next to the supermarket. We unfortunately never got a chance to check it out.

One more stop and we were done for the day. We decided to make dinner reservations the following night at 730PM at a B&B called “Gingerbread”, which was run by a loud and direct Israeli chef who made brilliant food but who apparently offended a lot of the TripAdvisor reviewers with his crassness. It sounded right up our alley. The chef met us at the door and took our reservation down no problem for the following night.

We were back to the Ceiba Tree Lodge from our Arenal volcano adventure just in time for showers and sunset with our wine. It was another perfect day.

We attempted Wi-Fi again in the public area prior to dinner, and continued enjoying the new bottle of wine we had just bought as dinner began at 7PM. Dirk did an amazing job with the food preparation. The $19 per person meal was three courses – soup, an entrée, and dessert. Tonight’s menu was squash soup that had a hint of savory and a hint of sweet, a rib-eye steak that he got cut that day from the local butcher, prepared in his own chipotle sauce surrounded by beans and baby potatoes, and then a slice of white birthday cake to top it off. It was all delicious. 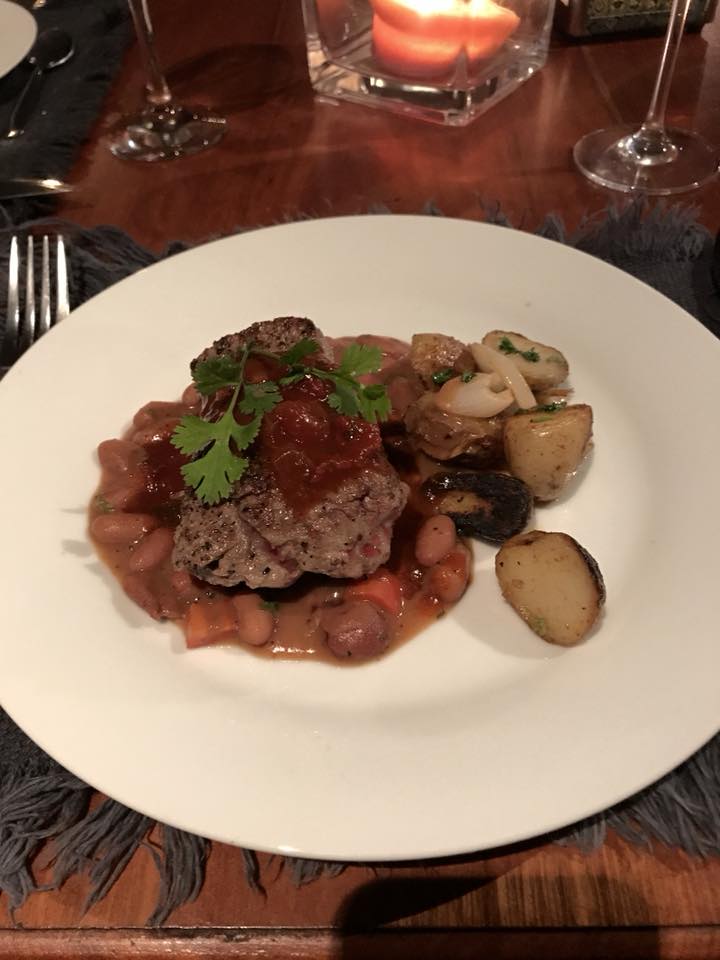 We easily finished every course and our wine as well. And, we decided to purchase several bottles of his sauce (chipotle and mango) for souvenirs and gifts – it was that good.

We spent the rest of the evening catching up with our table neighbors, the couple with the 9-month-old baby from Denmark. We talked about the difficulties of traveling with kids and also about how it was a choice to use kids as an excuse to not do things, or to find ways to continue to do the things you enjoy with your kids – they chose the latter path. They were basically our heroes, even though hearing the baby cry while we were trying to enjoy quiet time wasn’t amazing. Some meatier topics like the happiness index and welfare came up as well, and we all agreed that having some amount of a safety net makes a population happier, but that it could also discourage reaching as far as you can to achieve your dreams.

We turned in a little earlier that night because we were both zapped, and we knew that rising at dawn was a likely scenario yet again. This would be the first solid night’s sleep I was able to get the entire trip, and also was finally turning the corner on my cold.