Our last day in Bilbao began after breakfast with a long drive to Altamira to see the paleolithic cave drawings of wild animals and human hands. The Altamira cave isn’t technically located in Basque country (it’s in Cantabria, 30 km from Santander), but is close enough to make a convenient day trip. It took us about 1.5 hours to drive there from Bilbao.

A UNESCO World Heritage site, the Altamira cave was once enormously popular (in the 1970s and 1980s) when it was first opened to the public. Back then, you were allowed to actually walk through the real cave. So many visitors in and out began to damage the cave art, as the ambient temperature of the cave and carbon dioxide level was raised –  not to many people trying to touch the art.  For this reason, all we can see now in Altamira is the cave replica, but it was done very accurately and well.

The cave dates back to the Old Stone Age, around 18,500 years ago. 13,000 years ago the cave caved in on itself – the rock slide sealing it off and preserving its contents until its eventual discovery in the 1880s. Over the course of 5,000 years, both generations of people and animals took shelter and lived in the Altamira cave…in fact, for a few thousand years in between people had stopped living there and it was only animals.

The art in the Altamira cave was truly lifelike. The animals were often drawn to scale (such as a life-size deer) with charcoal and ochre or haematite. The colors used were res, browns, and blacks, characteristic of these materials. There were also abstract shapes accompanying the buffalo herds and other mammals.

I didn’t snap any picture since the Altamira cave was only a reproduction. However, the museum attached to the cave was very well done and worth a visit (just don’t go during a high school field trip, as we managed to do). You can also walk up a path to the entrance of the original Altamira cave. As we walked we found ourselves drawn in to a javelin/spear-throwing demonstration for the local high school students.

The visit fueled debate all the way back to Bilbao from Altamira about what separates us from animals (Leslie says the ability to produce art), forensic facial reconstruction techniques and veracity, and the missing link in the evolutionary chain. It also fueled a healthy discussion on the bifurcation of the human mind – how we as a people can hold beliefs of superstition and religion side by side with logic and science.

We finally discussed the theories behind why people feel the need to create art, and in particular, why art was drawn in this Altamira cave. Leslie bought a book on the various theories and will brief us with the conclusion later.

Back in Bilbao, from Altamira

Back in the city, Aitor dropped us off for lunch at Cafe Iruña near the restaurant we ate at the previous night, Old Shanghai. He left us for the afternoon while he led another tour for a group of 20 British tourists (including, as we later found out, the wife of the U.S. Ambassador to Great Britain). We would be on our own for the next few hours. 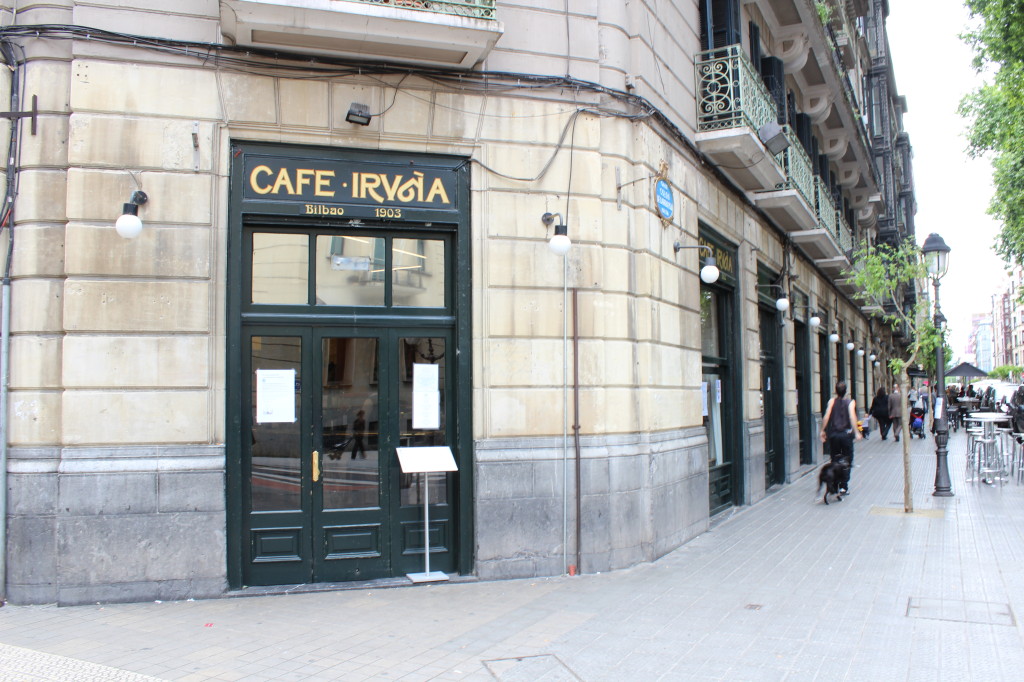 We each ordered the fixed price lunch, which included a drink. I ordered wine, and was surprised when they brought an entire bottle to the table – the perfect accompaniment to the first course, hearty mushrooms with a cheese sauce. I was so happy to be eating vegetarian. 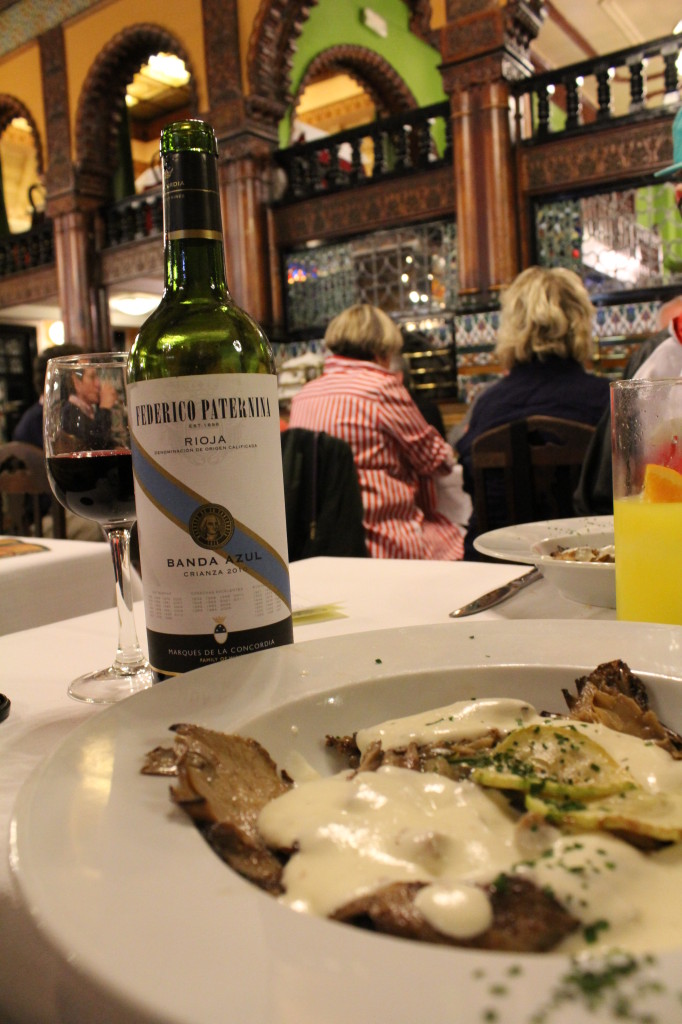 The main course was a lamb pot roast, and for dessert we tried the typical Bilbao pastry cake.

The Cafe itself was established in 1903 and was known for it’s ornate tile-work and decadent interior design. If you look closely you can see the Moorish influence that was popular in the turn of the century art, and even read some Arabic calligraphic inscriptions. 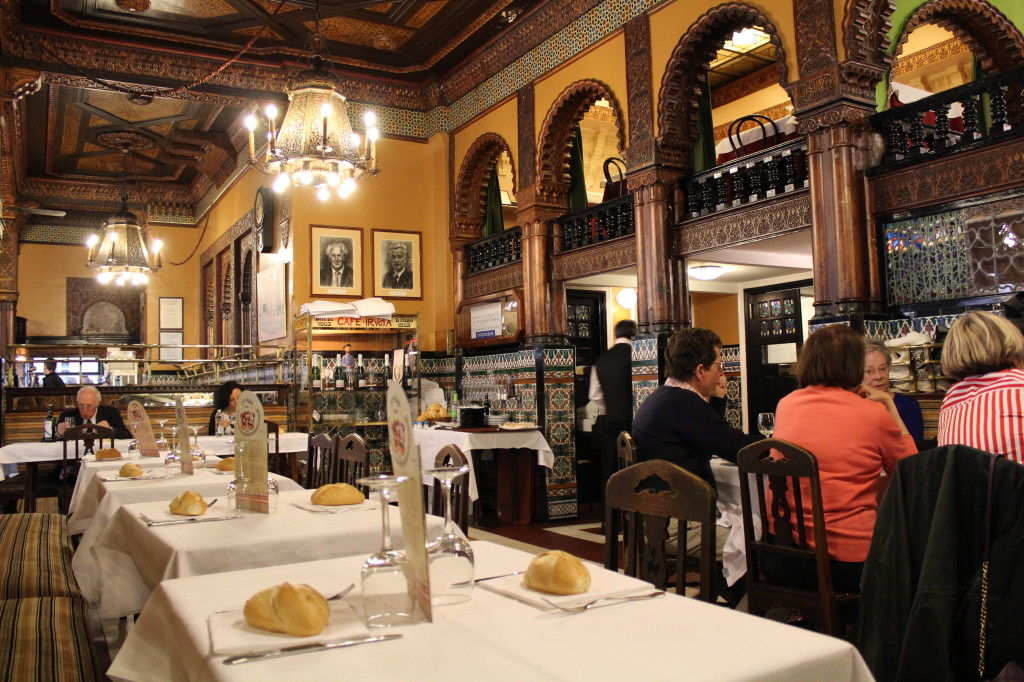 After lunch I parted ways with Marv and Leslie, who set off to the Guggenheim. Having already seen the Guggenheim last trip, I opted to take the afternoon and visit with friends from GEAP (Global Entrepreneurship Accelerator Program) at Deusto University. My Bilbao friends from GEAP, Carlos, Xabier, Amaia, and Begoña, work at Bilbao Ekintza. This is the organization responsible for Bilbao economic and business development projects, as well tourism promotion (Bilbao Turismo, a Destination Management Organization, or DMO), and foreign direct investment initiatives.

Xabier met me at their third new floor offices at the Plaza Circula, nearby where we ate lunch. The building was a converted bank, so it was very fancy – with marble floors and ornate staircases. It was also the new site for the main Bilbao Turismo tourist information desk, which Xabier explained was the largest in Europe. It was very modern – with interactive displays to help visitors discover Bilbao, and staffed with several multi-lingual Bilbao specialists to answer questions and help tourists/visitors get around the city. 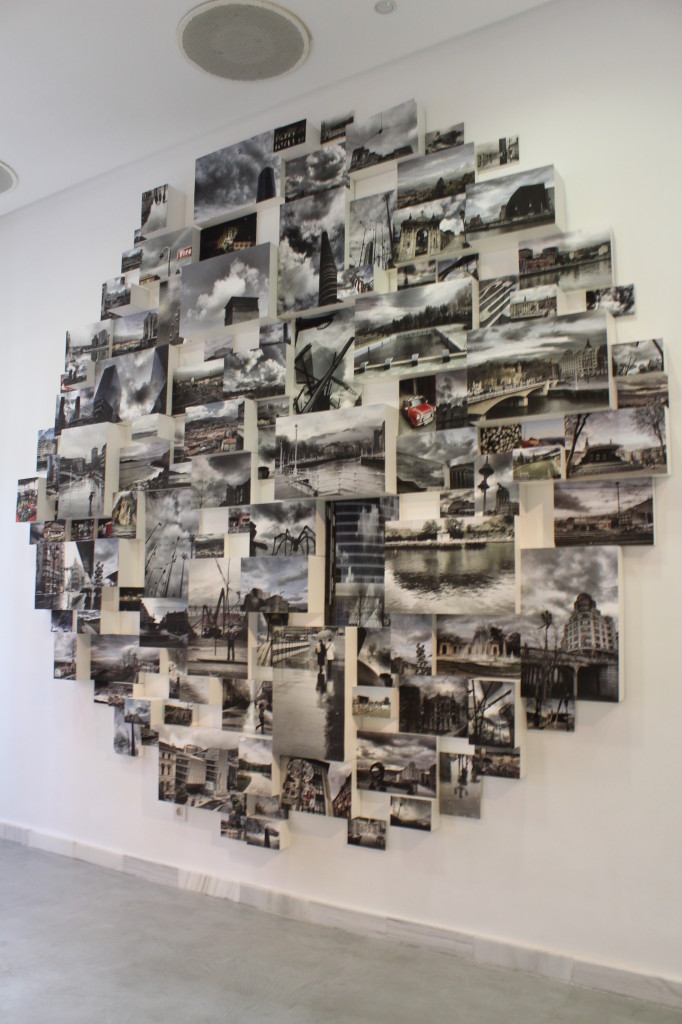 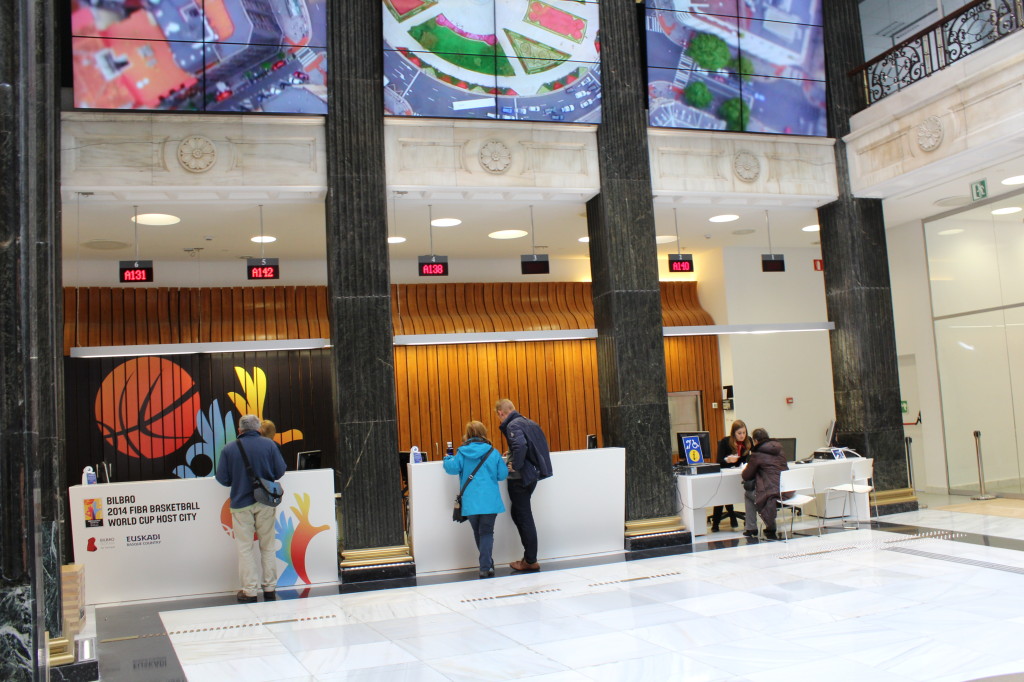 Afterwards I met with the Bilbo Turismo manager, Esther, and she shared some visitor and demographic statistics over the past few years, and also the types of programs they offer to visitors (many of whom are actually local visitors). For example, the city of Bilbao offers a walking tour on the weekends for a low rate (it used to be free before the Guggenheim, in the early 1990s). The office itself is open long hours to accommodate tourist needs – from 9AM to 9PM – although Xabier and my friends typically only work until 4PM on weekdays.

After our visit I walked with Xabier and his friend to their late lunch. We talked about Basque migration into the United States – to Boise, Idaho and Elko, Nevada. Xabier’s friends used to like in Boise. Now I have a reason to visit once I move to Denver!

It was a great to see my friends, and after I parted with them I strolled along this river, back to the hotel. I had to take some obligatory Guggenheim pictures. 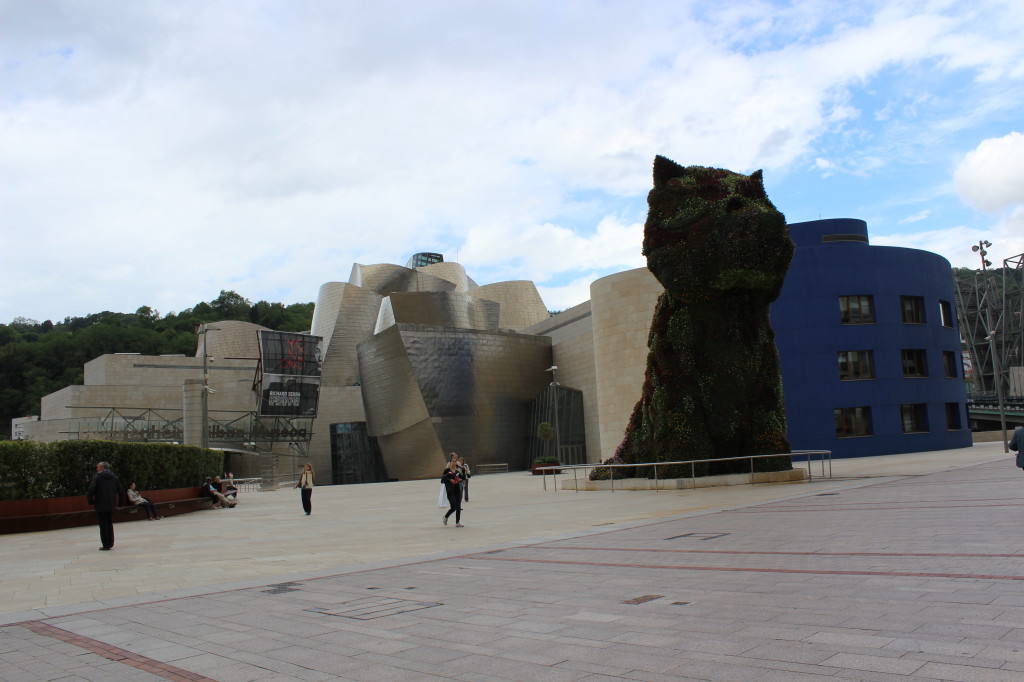 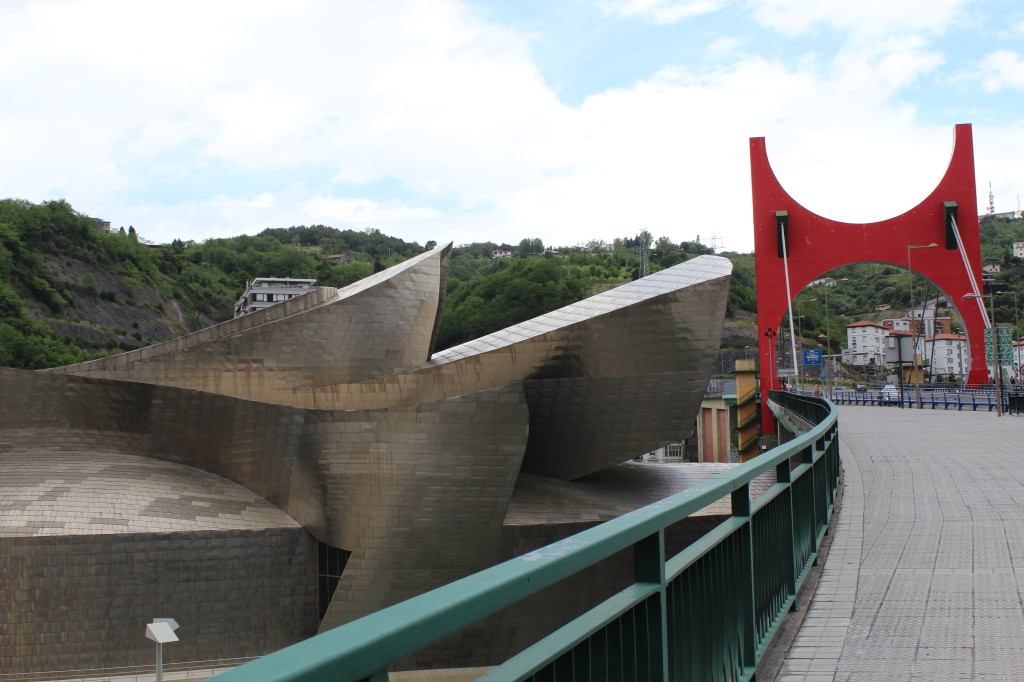 As well as some pictures of my favorite Bilbao bridges and views. 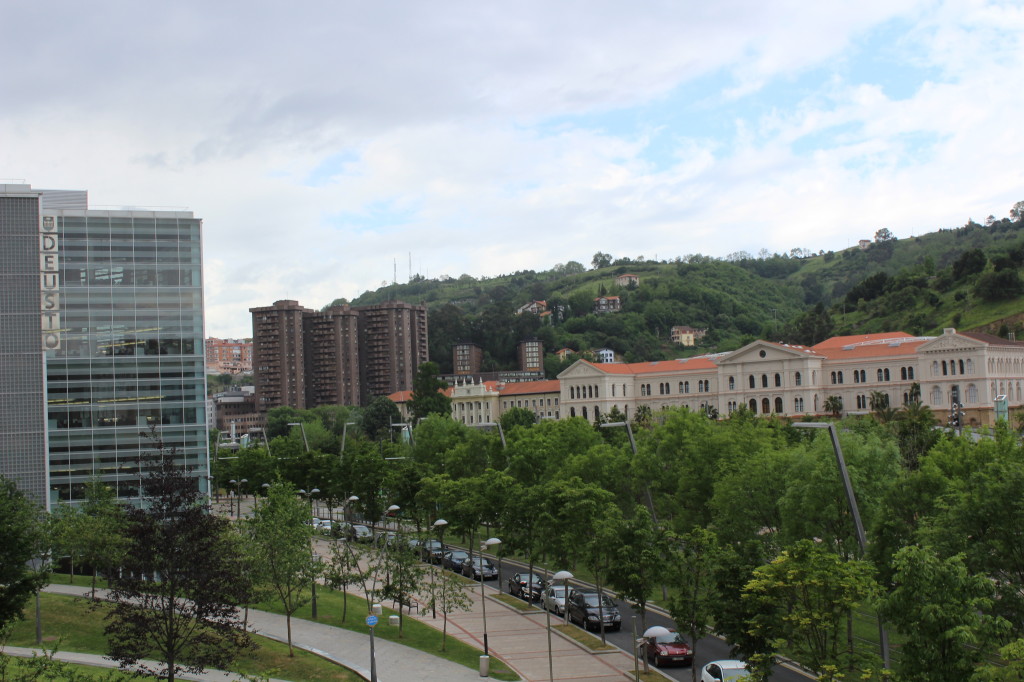 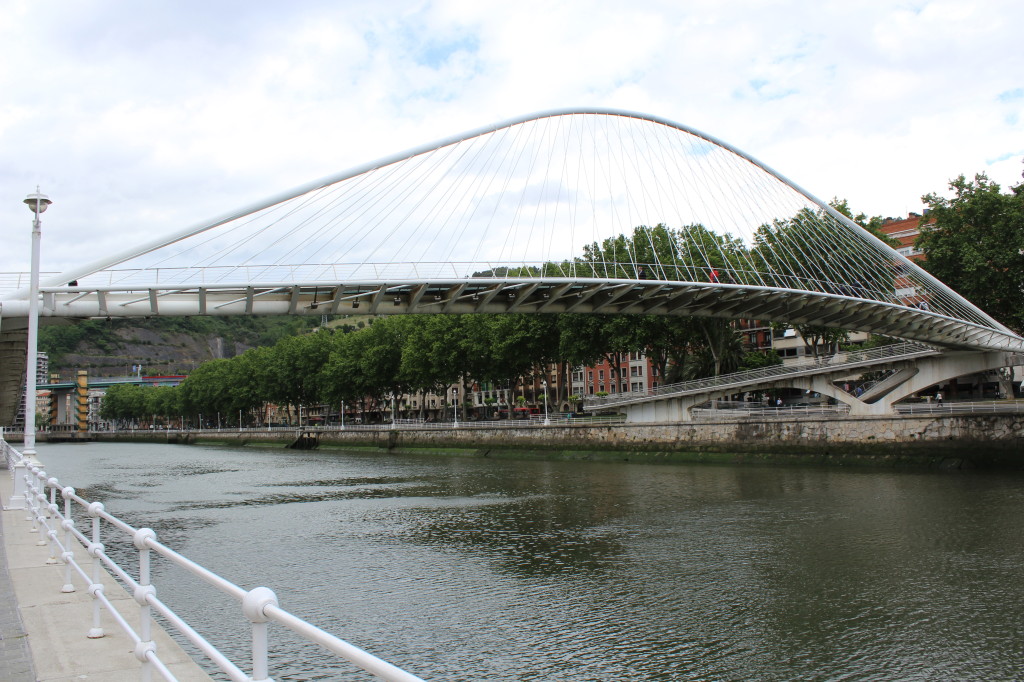 Back at the Miró Hotel, I met Leslie and Marv who were both underwhelmed by the inside of the Guggenheim. Yep, told them so. We all checked emails for an hour until Aitor met us after his tour, and we continued on to Rioja for the night.

We got in late – around 830PM – and didn’t have much time to enjoy our gorgeous boutique wine-country hotel – the Viura Hotel.

May 24, 2014
Travel No comments therestlessroad